Ann Binlot
Jun 14, 2016 5:54pm
In 2014, a toddler named Alan Kurdi fled war-torn Syria for Turkey with his older brother Ghalib, his mother Rihanna, and his father Abdullah. Months later, on a beach at Bodrum, he boarded a small inflatable boat destined for Greece on a journey that should have taken minutes. Their hopes for a better life were crushed when the vessel capsized and all but Abdullah drowned, becoming three of more than 3,700 refugees who died in the Mediterranean last year. Kurdi’s lifeless body washed ashore, and Turkish photographer Nilüfer Demir captured the harrowing image that would go on to become a symbol for the migrant crisis in Europe.
If you’re one of the thousands expected in Switzerland for Art Basel this week, you may be approached by someone holding a blue box. This person is one of a small team assembled by Chilean-born, New York-based artist
Alfredo Jaar
for his contribution to the Parcours sector of the fair. “May I offer you a gift?” the person will ask. Upon receiving the plain blue box, recipients will read the directions: OPEN HERE. A warning, written in bold white text reads: THIS GIFT CAN CHANGE YOU.

Photos of Alfredo Jaar, The Gift, 2016, as part of Art Basel Parcours, by Benjamin Westoby for Artsy.

Excerpts from the editorial Mario Calabresi wrote for Italian newspaper La Stampa calling for the image of Kurdi’s dead body to be published are printed below the warning: “This photograph demands that each and every one of us should stop for a moment and face what is happening on the beaches where we spent our vacations. We cannot procrastinate; dodge between our fears and impulses of compassion. This is the last chance for Europe’s leaders to live up to the challenge of history. And it is the chance for every one of us to take stock in the ultimate meaning of existence.”
An image of that Turkish beach where Kurdi’s body washed ashore—Jaar didn’t want to show the two-year-old’s body—wraps around the box, along with a call for donations for the Malta-based NGO Migrant Offshore Aid Station (MOAS). The organization was launched by a wealthy couple after they discovered what may have been clothes from a capsized migrant vessel floating near their yacht while sailing through the Mediterranean. MOAS sends out drones over the Mediterranean, monitoring the waters for migrant vessels in need of assistance. “When they see a boat in distress, they send a signal, and their boats go and save them,” explained Jaar during an Art Basel dinner for Goodman Gallery, which represents him in South Africa. “It’s the only NGO that is saving people who are about to sink.”
Jaar hopes that contributions earned from the 12,000 boxes he plans to distribute at Messeplatz, across Basel, and at a station on Münsterplatz over the course of the fair can help change attitudes towards the refugee crisis in Europe. “The attitude of Europe has been despicable,” said Jaar. “The immigrants coming to Europe represent 0.3 percent of the European population. And they are panicking. Turkey, Lebanon, and Jordan have welcomed 4.2 million people without anyone noticing, and Europe is panicking for a million and a half. Germany has been the most generous. Poland and Hungary have been completely fascist, so there is a tension between two sides in Europe, and we hope that the German model will prevail.” 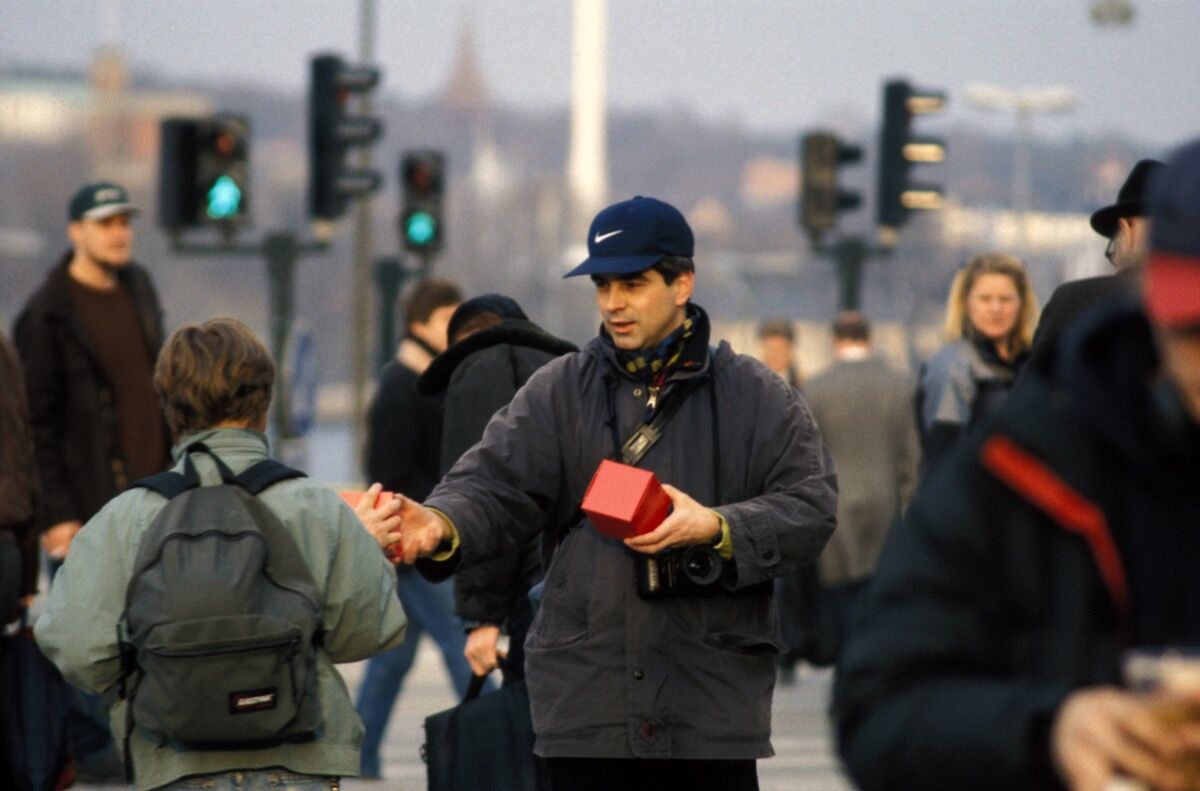 Advertisement
The artist, whose practice is primarily socially motivated, staged a similar public intervention in Stockholm in 1998, calling attention to the Rwandan genocide. Since this more recent crisis erupted, Jaar has met with migrants in Lampedusa and Malta. “The issue of immigration is huge in Europe, and in the United States, where we have a proto-fascist who want to build walls, who wants to expose Muslims, and so on.” He recounted an interview he filmed with a 12-year-old Syrian boy. “He said, ‘I don’t want to go to Europe. Just stop the war and I’ll go back to my country. I don’t want to go to Europe.’ It’s not their choice. But their country is destroyed. They are human beings like every one of us.”
During a time in Basel when moneyed collectors are perusing the myriad fairs to add another artwork to their collection, it’s refreshing to see an art project that calls attention to an urgent issue. And Jaar reminds us that the solution—to let the migrants in—is close at hand. “Europe needs new blood, and Germany needs half a million people every year in order to keep their competitive levels,” he said. “It’s very sad. It’s a tragedy. We are less and less human, and so to assist and help the refugees would be a very small sign in order to recoup some of our lost humanity. It seems so logical, so normal, so human.”
Ann Binlot
Related Stories