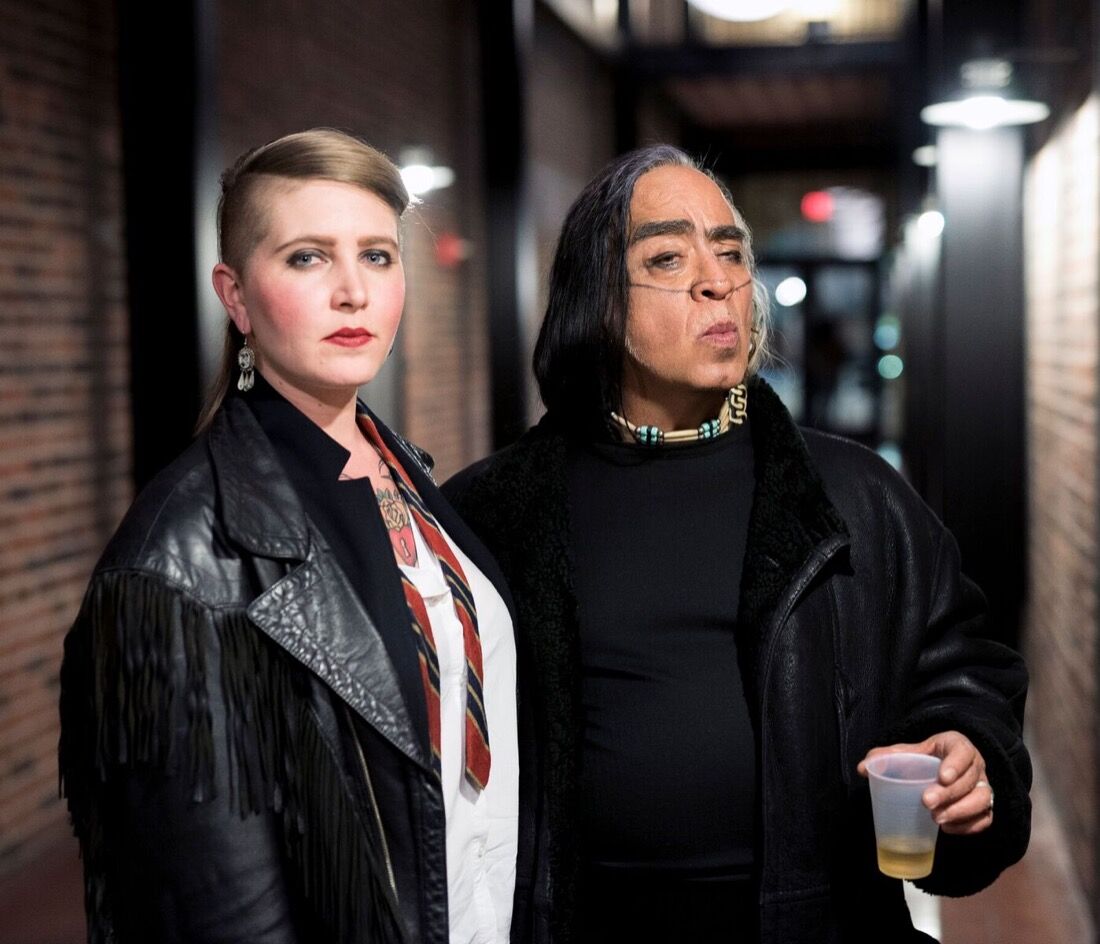 “My understanding of performance is not really related to that
Fluxus
stuff in any way,” Rebecca Belmore told me over iced tea during a break at “ACTING OUT: A Symposium of Indigenous Performance Art.” Belmore, a Canadian First Nations artist who was the second-ever indigenous person to represent her country at the Venice Biennale in 2005, was one of 15 North American indigenous performance artists who had gathered for the event. Held on December 3rd and 4th in Santa Fe, New Mexico, the symposium consisted of workshops, discussions, and screenings reflecting on past and future work.
“Performance has always been integral in contemporary as well as traditional native arts,” said Andrea R. Hanley, membership and program manager for the Museum of Contemporary Native Arts (MoCNA), one of the event’s lead organizers. A member of the Navajo nation, Hanley remarked that indigenous artists oftentimes find themselves alone at workshops and events. “We wanted to support the vision and creativity of indigenous performance artists so they could engage each other.”
Belmore, like most of the artists I interviewed over the two-day symposium, found early inspiration for performance not in a college art class or after-school theater program, but in her lived experience as a First Nations woman in the racially homogeneous Thunder Bay, Ontario. It was there, she said, that she “had to develop some kind of presence, a way of walking, of carrying myself, always being conscious that anything could happen to me at anytime.” 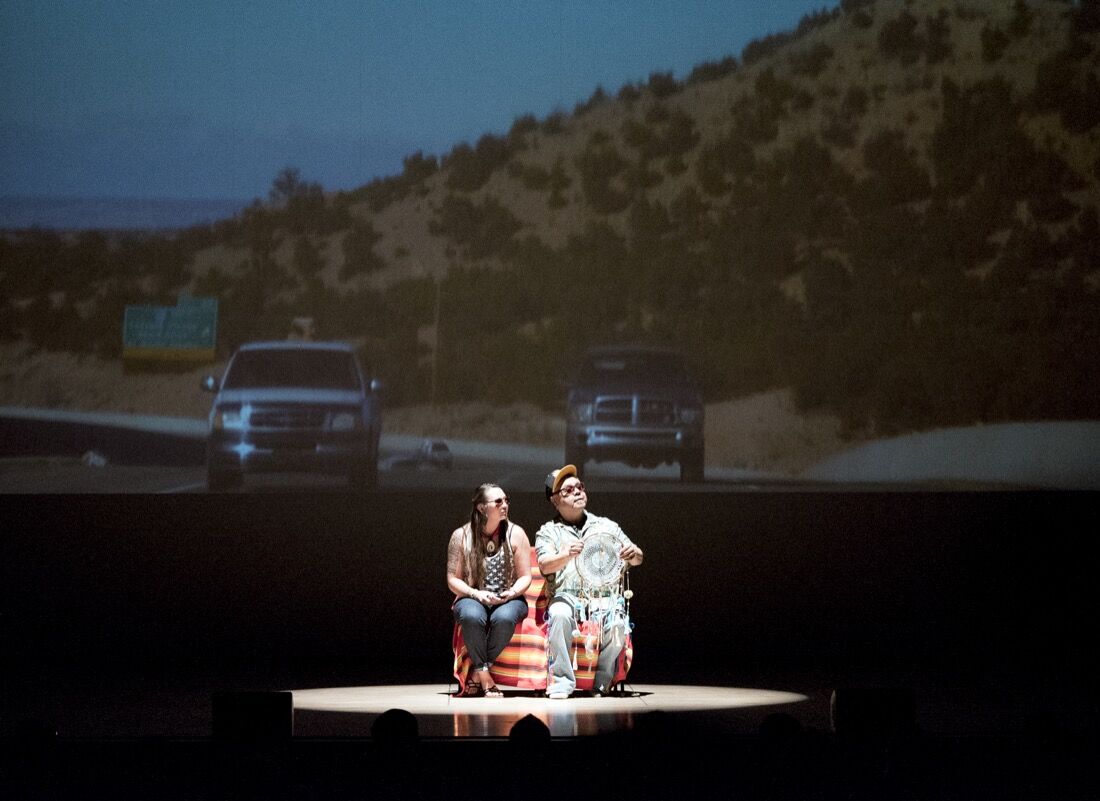 Anna Tsouhlarakis, an artist who grew up in New Mexico and is part Navajo, part Greek, reflected on her experience as the only Native-American student at the Yale School of Art in the early 2000s. She was surprised to notice that her work was routinely evaluated within the established narratives of indigenous arts and crafts—a jarring contrast with the way in which work of her non-native peers, who were assumed to be playful genre-benders, was received. Through performance, Tsouhlarakis “realized that I could create my own fictions and reverse the role of education,” she told me after her talk. “Performance came with less baggage.”
In addition to giving a platform to younger artists like Tsouhlarakis and Merritt Johnson, “ACTING OUT” drew some of the biggest names in indigenous art to Santa Fe. Artist and writer (and MacArthur Fellow) Guillermo Gomez-Peña, whose performances are characterized by the artist’s freakish charisma, linguistic exuberance, and gender-bending antics, was on hand to lead a radically compressed version of the two dozen workshops he conducts every year throughout the world with his troupe, La Pocha Nostra.  Gomez-Peña, who was born to an indigenous father and a criolla mother in Mexico City, spent most of the two hours instructing us to work with partners on sensory engagement—staring into each other’s eyes for what felt like an eternity and manipulating one another’s bodies as though they were raw material. (“Recall, however, that this material has agency, interact with it tenderly,” Gomez-Peña said.)
The next day, over white wine and café pasado, and switching between English and Spanish, I spoke with Gomez-Peña. “Since the beginning, I realized that my complex identity could only be completed in dialogue with the Native American community, and with the larger Latino community of the U.S,” he explained. “It’s already been a 30-year project of collaboration.” For him, the best performance is collaboration, an act of “radical citizenship” that he has tried to push forward by focusing on pedagogy and fostering space for young activists within his San Francisco home. 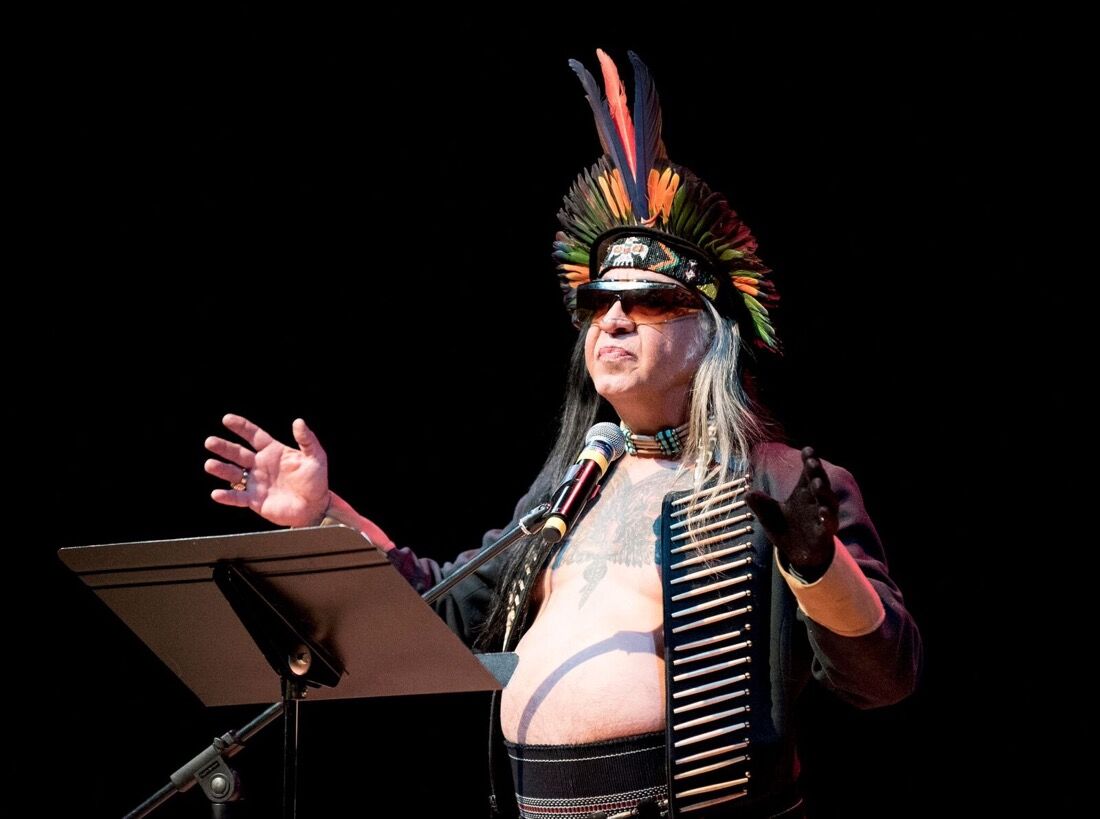 Advertisement
The event’s keystone performances took place on Friday evening within the ornate Lensic Performing Arts Center in front of a crowd of roughly 300 people. I sat next to Raven Chacon and Kade L. Twist, who, along with Cristóbal Martinez, build stunning multimedia installations under their artist collective “Postcommodity.” (In their recent project Repellent Fence/Valla Repellente (US/ Mexico Borderlands) (2015), they raised 26 enormous “all-seeing” balloons in a two-mile line across the U.S.-Mexico border.) Together, we watched as a soft-spoken James Luna—best known for his Artifact Piece (1987), in which he exhibited his own body in a museum case and labeled it as a foreign artifact—became Doc, a spaced-out hippy on a pun-filled spiritual journey to “Santa Fake” with his traveling companion Tish (Sheila Tishla Skinner).
Gomez-Peña took to the stage after Luna. Dressed in a black leather kilt, motorcycle boots, and with a single black line of paint across each cheek, he stood behind a podium and performed what he referred to as a “living archive,” reading notes of “half-scripted madness.” After half an hour, a disembodied voice reminded him his time was up, to which Gomez-Peña responded by pausing, taking a deep breath, and saying “God bless...” and pausing, and repeating “God bless...,” and pausing—until audience members were shouting out everything from “Mexico” to “Syria,” and finally: “America...the continent, of course!” 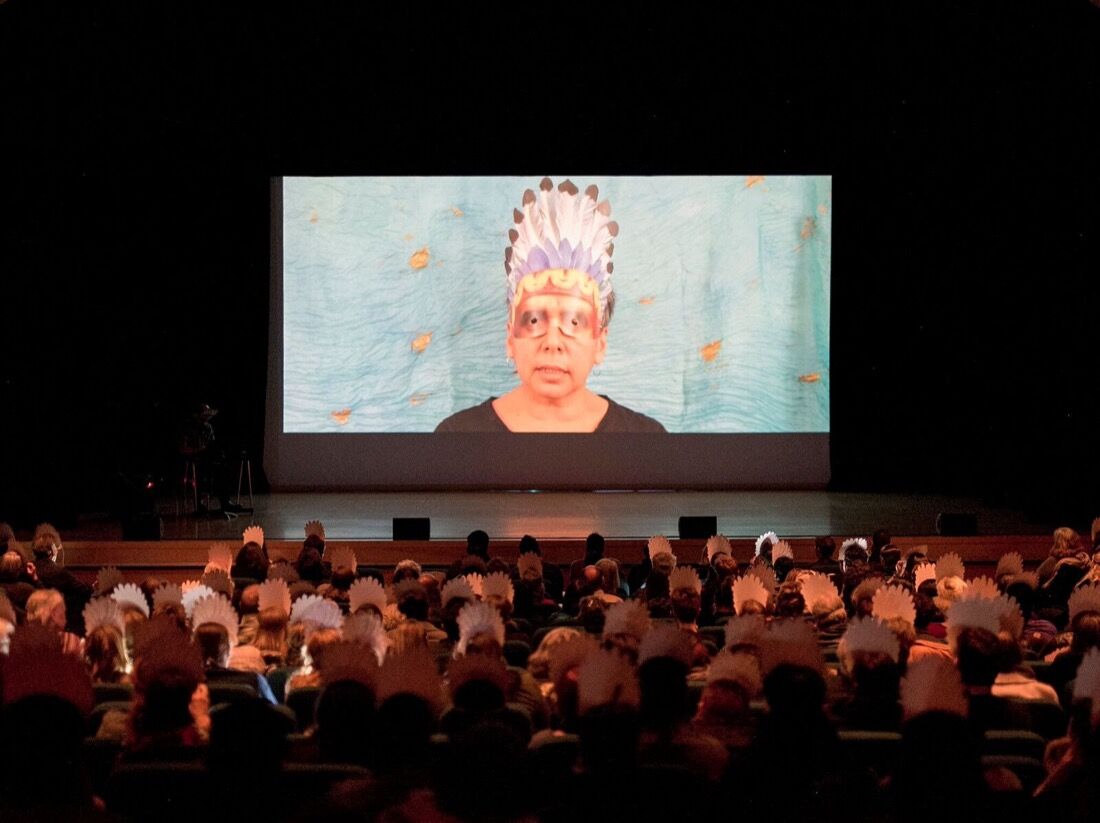 Belmore had the evening’s final and best performance. In conversation the previous day, she had repeatedly stressed her dislike of performing indoors. Her response to the traditional theater space was a remarkable performance entitled The Theater of the Brave, in which she projected her face, covered in a paper mask of an Indian man in a feathered headdress, onto an enormous screen. Her voice pitched a few octaves lower, she called out to the land and her people: “It belongs to us, and that is our story! I have spoken.” Filling the silent auditorium with her incantation, she frequently interrupted her narrative to shout out “Brother!,” at which point a musician onstage would let forth a mournful melody on his distorted slide guitar. Her quasi-comedic evocation of displacement was beautiful and deeply unsettling.
If not Fluxus, then who, I had asked Belmore the day before. She told me the story of the Micmac Indian who had been taken to France in the 16th century. “He was put in a beautiful garden to be the Indian at the party for all these wealthy people. They put a deer in the garden: he was to kill it, dress it, cook it, and eat it. They watched him for a long time, and according to the Micmac people, to take his revenge, he relieved himself in front of them all. For me, that’s early performance art. That’s brilliant. That’s my influence.”
—Lucas Iberico Lozada
Related Stories