America’s Most Absurd Laws, in Pictures 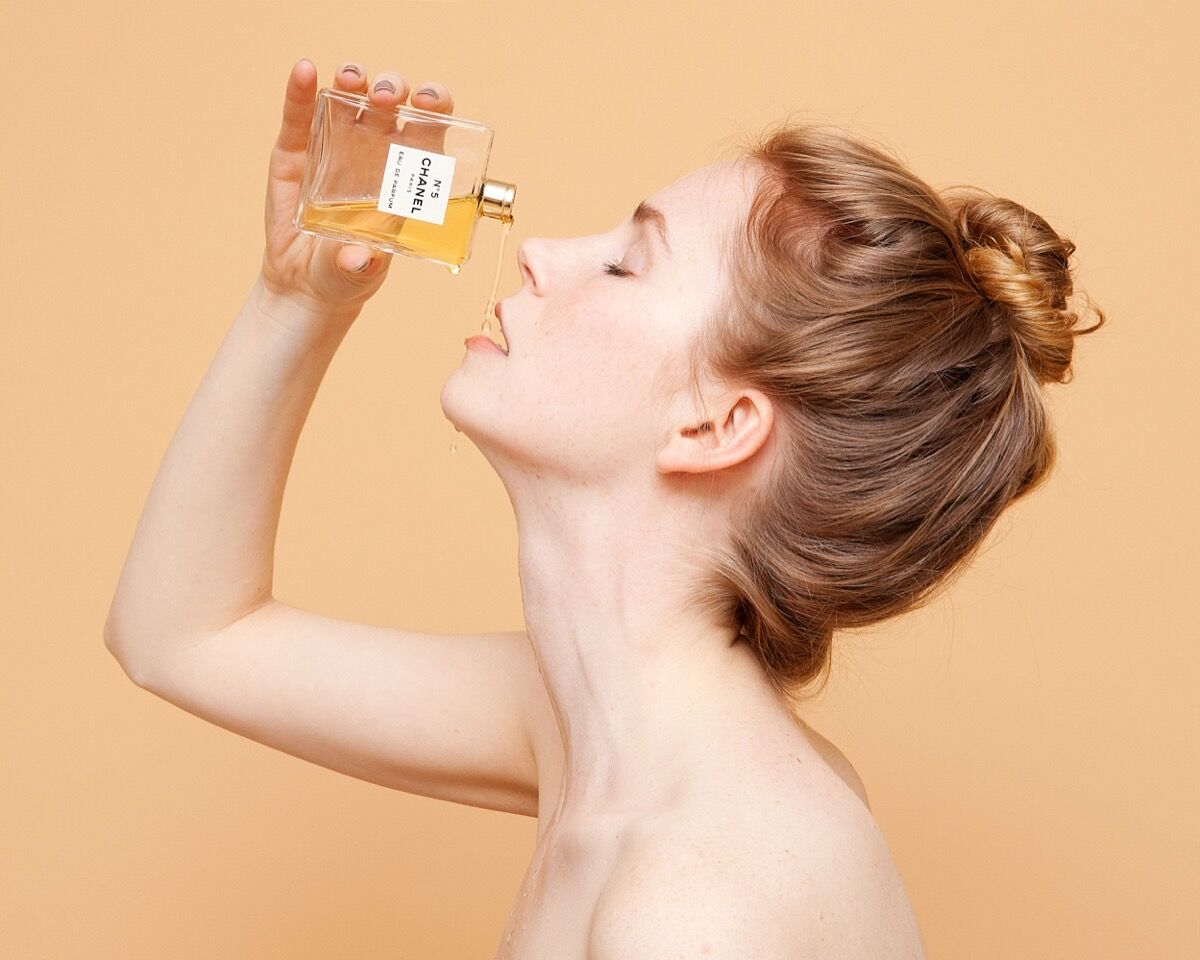 Olivia Locher, I Fought the Law (Delaware), 2016. Courtesy of the artist and Chronicle Books.

In Nevada, it is illegal to put an American Flag in a bar of soap. In Georgia, picnics are prohibited in graveyards. In Connecticut, a regulation states that pickles must bounce to officially be considered pickles. And in Louisiana, it is illegal to gargle in public.
These are just a few of the alleged rules that sparked photographer
Olivia Locher
’s series, “I Fought the Law” (2013–16). The body of work, which visualizes 50 of America’s most bizarre regulations, is whimsical and delightfully outlandish. But it also poses some serious questions: Where did these laws come from? How could they possibly be true? And is our legal system really that arbitrary?
Locher, a self-described do-gooder, began pondering these conundrums in 2012. “One night, my friend announced that it’s illegal to have an ice cream cone in your back pocket in Alabama,” Locher tells me. “That off-hand comment stuck with me.” 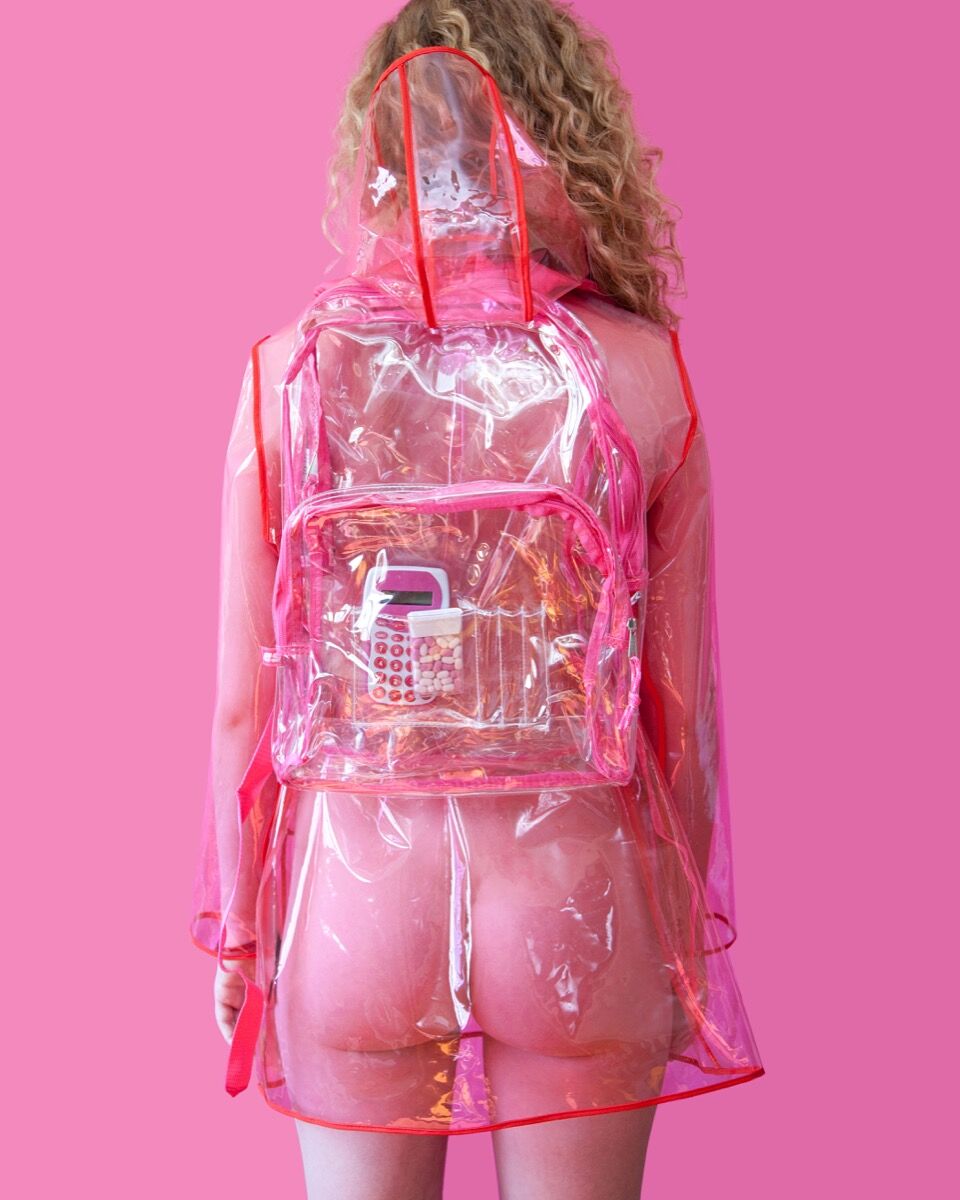 Olivia Locher, I Fought the Law (Rhode Island), 2014. Courtesy of the artist and Chronicle Books. 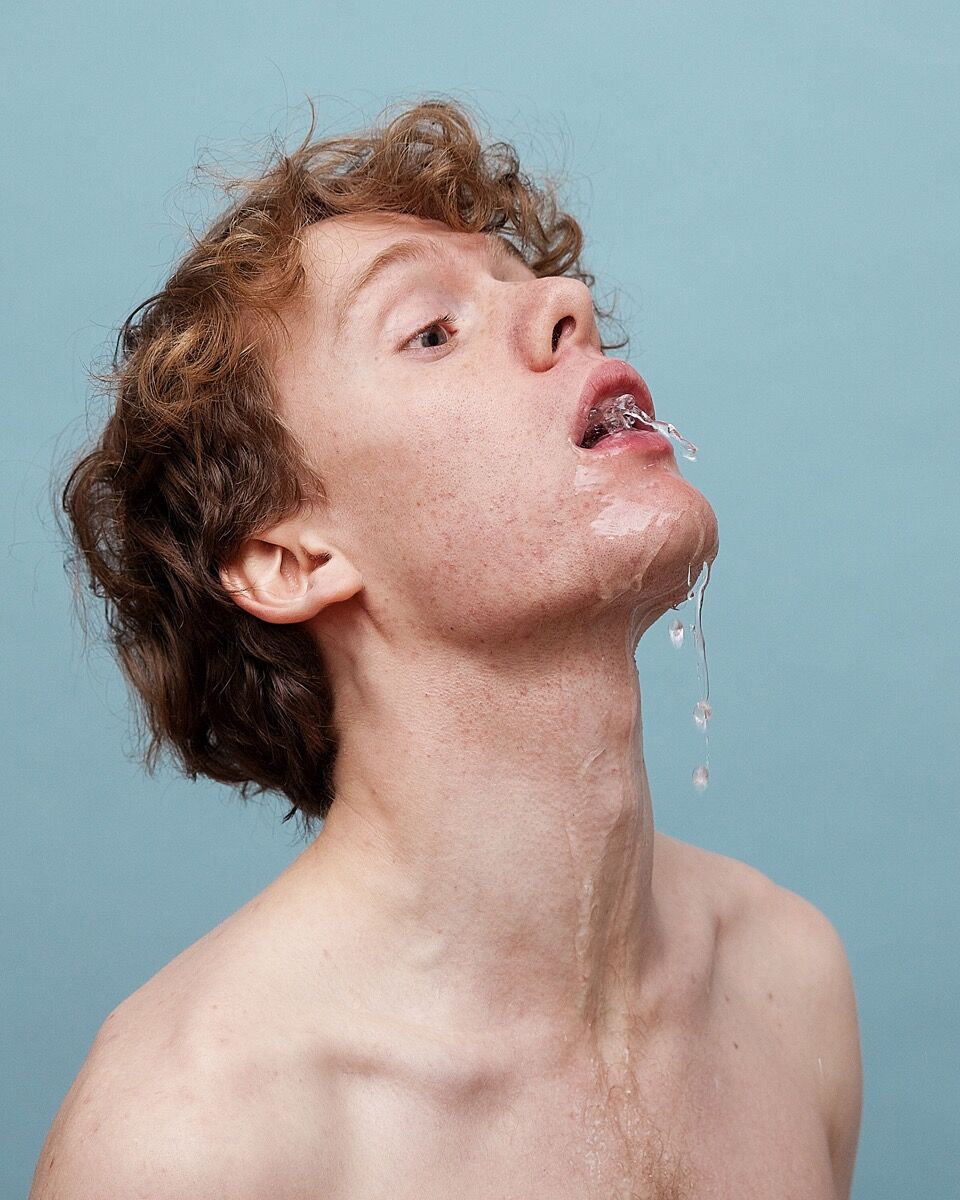 Olivia Locher, I Fought the Law (Louisiana), 2015. Courtesy of the artist and Chronicle Books.

In fact, Locher couldn’t get the statement out of her head for over a year. “There was something so bizarre and so visual about it,” she says. “And when an idea haunts me long enough, I usually turn it into work.”
Curious to learn more about the purported ban on back-pocket ice cream, Locher, like most millennials, began her research on the internet. It wasn’t easy to find the information on the rule’s origins, but after some digging, she learned that her friend had been wrong. According to her research, it wasn’t illegal to store a cone in your pants in Alabama. At one time, however, it had been off limits in Kentucky and Georgia. Legend has it that, in the 1800s, horse thieves nestled ice cream in their back pockets to lure the animals away from their rightful owners—hence the crackdown. 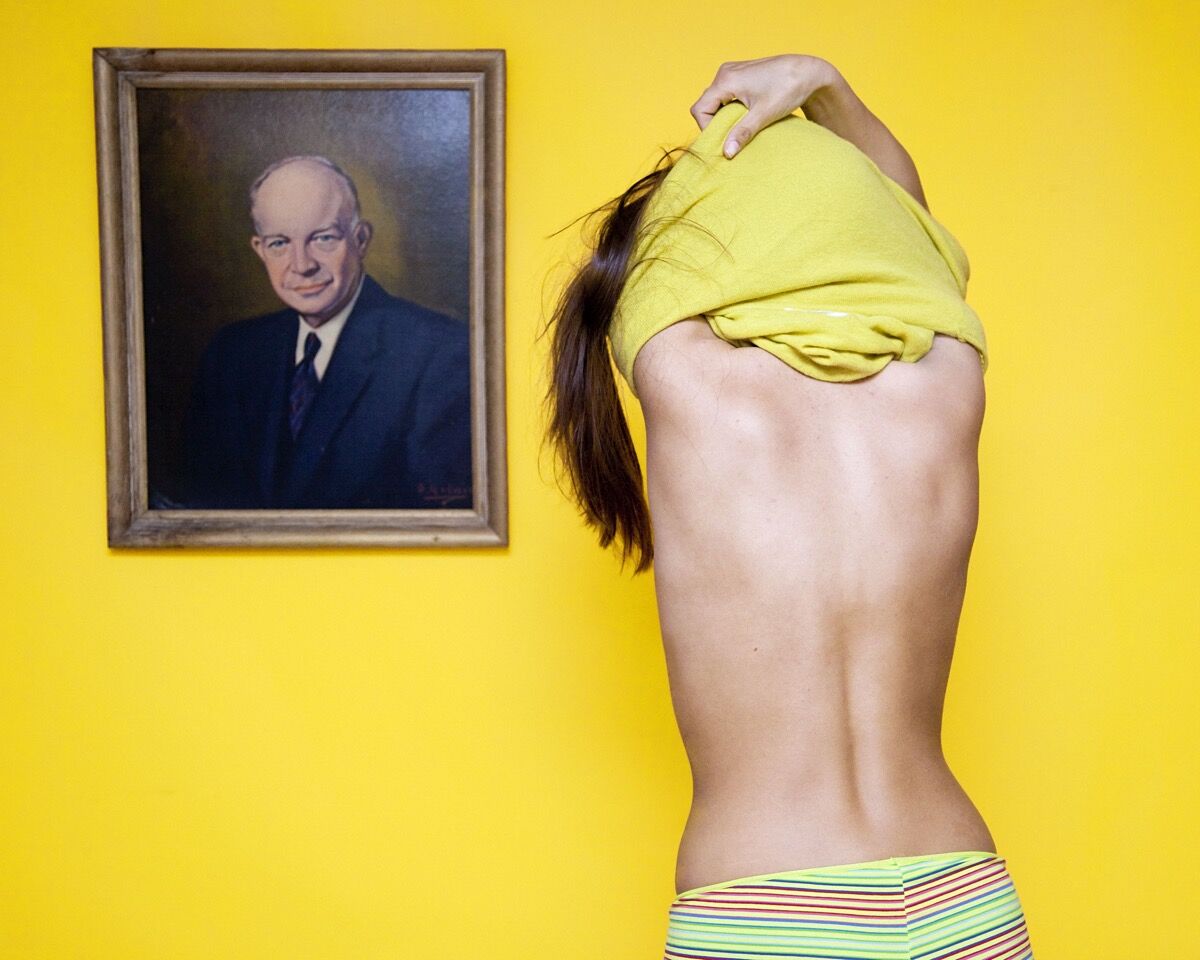 Olivia Locher, I Fought the Law (Ohio), 2014. Courtesy of the artist and Chronicle Books.

Advertisement
How the passage of time had transformed this law into a fantastical rumor fascinated Locher. She wondered if there were other rules with similarly archaic backstories. “How this law had been appropriated, twisted, and taken as fact was so interesting to me,” she says. “I became obsessed with finding more.”
“I Fought the Law,” which comprises a new book by the same name, brings together 50 of these unbelievable regulations—one for each state. Locher found them across the internet, on websites like dumblaws.com, and in two books published by Scholastic: Crazy Laws (1979) and More Crazy Laws (1992), both by Dick Hyman. Olivia Locher, I Fought the Law (Alabama), 2013. Courtesy of the artist and Chronicle Books. Olivia Locher, I Fought the Law (Nevada), 2015. Courtesy of the artist and Chronicle Books.

Together, the photographs represent a mix of laws that remain on the statute books, those that have been revoked, those which never came to fruition but nearly did, and a handful of myths. Across the series, Locher pairs the single-sentence rules with sumptuous, candy-colored studio photography that illustrates their absurdity.
One spread pictures a man who’s mounted a bike that is half-submerged in a pool. He wears swim trunks, goggles, and a swim cap—equipment that becomes futile the second you realize he’s not riding the bike through the water, but actually sinking. The caption that accompanies the image reads: “In California nobody is allowed to ride a bicycle in a swimming pool.” 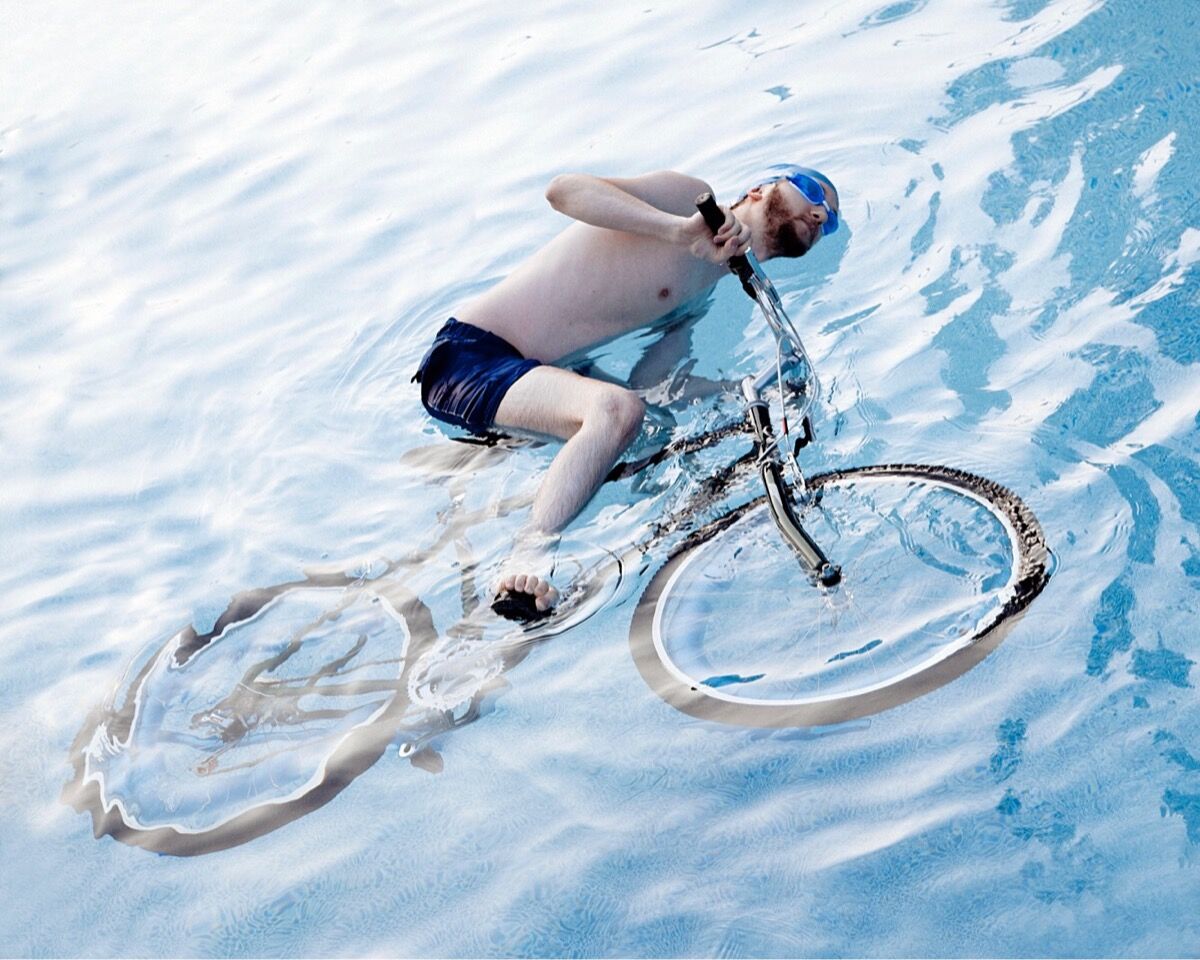 Olivia Locher, I Fought the Law (California), 2013. Courtesy of the artist and Chronicle Books.

Another shows a woman removing her top in front of a stately portrait of former president Dwight Eisenhower. The corresponding text reveals the origin of the image: “In Ohio it is illegal to disrobe in front of a portrait of a man.” And an image of a woman ecstatically glugging a bottle of Chanel No. 5 like she might a fine wine says: “In Delaware it is illegal to consume perfume.”
Across the series, Locher doesn’t distinguish between fact and myth. The ambiguity is intentional “because these laws themselves are ambiguous,” she says. “It’s hard to find anything about them—their origins, whether or not there’s any truth to them—even in law books.”
This obscurity also reflects how archaic, arbitrary, and downright puzzling laws, and the legal jargon that surrounds them, can feel to the American public. And how easy it is for these regulations to be interpreted—or misinterpreted. Locher’s photos highlight these absurdities by broadcasting them in a language we can all understand: images.
Alexxa Gotthardt
All images from I Fought the Law: Photographs by Olivia Locher of the Strangest Laws from Each of the 50 States, published by Chronicle Books 2017.
Related Stories