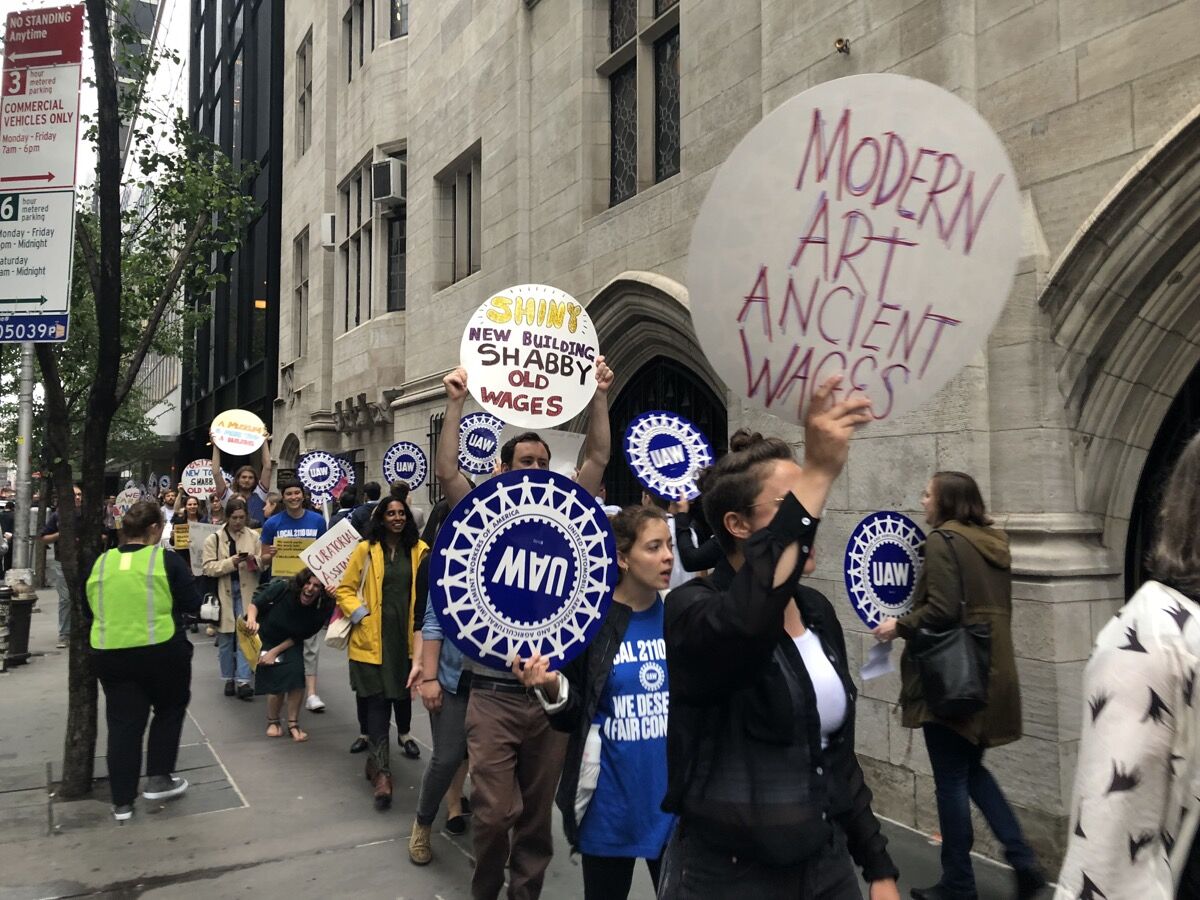 Legions of museum staff at the Museum of Modern Art (MoMA) are racing to meet deadlines as the New York City institution undergoes a $450 million renovation and expansion, its second major overhaul in two decades. But due to stalled union negotiations over issues such as raises for longtime employees, healthcare costs, and job security for entry-level curators, more than 250 of them have been working without a contract since May 20th and are inching closer to going on strike for the first time since 2000, when the museum was about to close for its previous expansion project and significantly reduce its workforce with little guarantee that past employees would be hired back.
The dispute is not the first of its kind, either for MoMA or for any number of major institutions that spend lavishly on expansions while refusing to meet their workers’ demands.
“Unfortunately, it’s very consistent with what [the museum] did in 2000, and it’s very consistent with what you see happening in private universities and wealthy private nonprofits,” said Maida Rosenstein, the president of Local 2110 of United Auto Workers, the union that represents the largest number of MoMA employees, as well as workers at Barnard College, Columbia University, and New York University. “You see Columbia University and NYU buying up an enormous amount of land, raising billions of dollars to fund their expansions, while being extremely tight-fisted with their workers—and actually trying to use the expansion as a justification for that. It’s really infuriating to see that happen again at MoMA.”
This expansion has exacerbated staffing shortages and pushed existing workers to work longer hours, according to museum employees, despite many of them not being eligible for overtime pay. The average salary for members of Local 2110—including editors, educators, accountants, curators, designers, salespeople, and librarians—is below $50,000, Rosenstein said. The union’s bargaining committee is pushing for MoMA to hire more non-temporary workers, while also increasing job security for entry-level curatorial staff, who can currently be dismissed without cause, according to Local 2110. 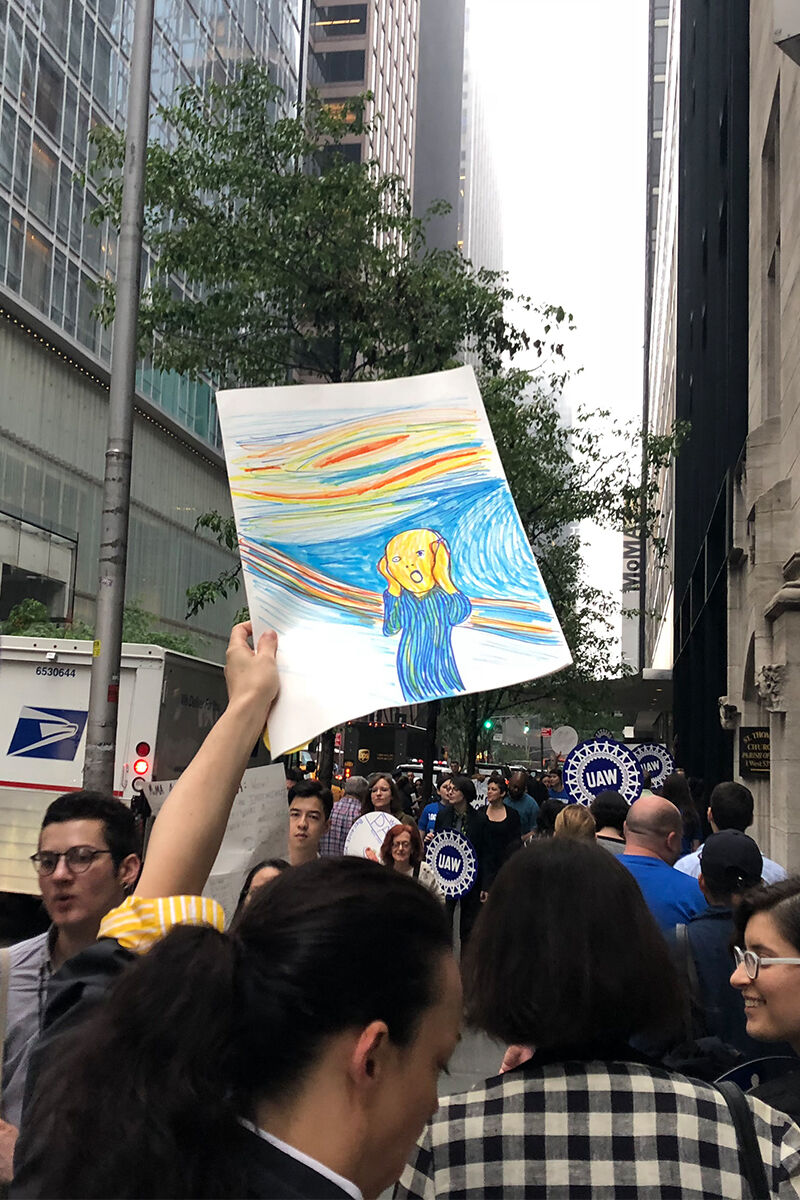 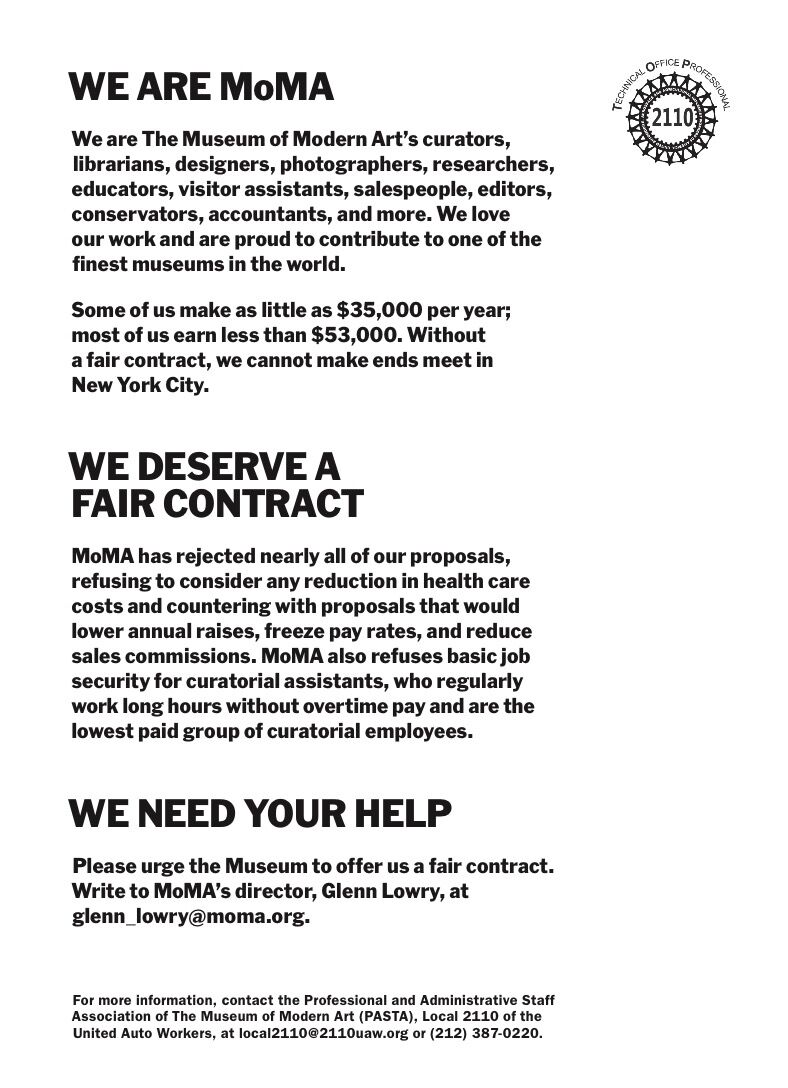 “[The junior curators] work extremely hard, they don’t get any overtime, they work long hours in the slim hope that they’ll get promoted, and then MoMA boots them out,” Rosenstein said. “It’s a very exploitative situation.”
The current expansion and renovation project, which kicked off in February 2016 and is due to be completed next year, will open with an ambitious rehang of MoMA’s permanent collection to fill the entire museum. Galleries will extend into the
Jean Nouvel
-designed skyscraper that has risen immediately to the west of MoMA’s longtime home, making for a total of 175,000 square feet of gallery space (up from 135,000 square feet pre-expansion, contributing to a 30 percent increase). The expansion will also increase the museum’s public space from 87,000 square feet to 109,000 square feet.
As talks with the museum have stalled, the workers have been taking their plight to its patrons, public, and other employees. On May 21st, many of them wore bright-blue shirts emblazoned with the words “We Deserve Fair Contracts” to a staff dinner in the museum’s sculpture garden. On May 31st, they demonstrated outside the museum’s major spring benefit gala, the Party in the Garden, brandishing signs with slogans including “Invest in People, Not in Real Estate” and “Shiny New Building, Shabby Old Wages.” They have also targeted specific VIP and member events, including the recent opening of the exhibition “Toward a Concrete Utopia: Architecture in Yugoslavia, 1948–1980.” And every Friday, union members have handed out flyers to visitors waiting in line to enter the museum during its weekly admission-free hours.
“The public has been wonderfully receptive to the leafleters outside the Museum, and during events—often stopping to talk with the employees who distribute the leaflets,” said Danny Fermon, a librarian who has worked at the museum since 1971 and is a member of Local 2110’s negotiating committee. “We’ve heard about at least one person who brought up the failure to come to a contract agreement in a public event chaired by [MoMA director] Glenn Lowry…so it’s gradually coming out there to the MoMA-going public.”
The main contract items at issue in the negotiations include the museum’s attempts to do away with or reduce step increases. This system, introduced more than two decades ago, ensures that employees are making a certain percentage more than the minimum salary for their title. Another benefit at stake is the museum’s system of healthcare reimbursement accounts, which are currently available to all of the lowest-paid employees in the union, half of the mid-range union employees, and none of those making over $75,000, according to Local 2110’s most recent contract; the union would like to see those accounts made available to all union workers. 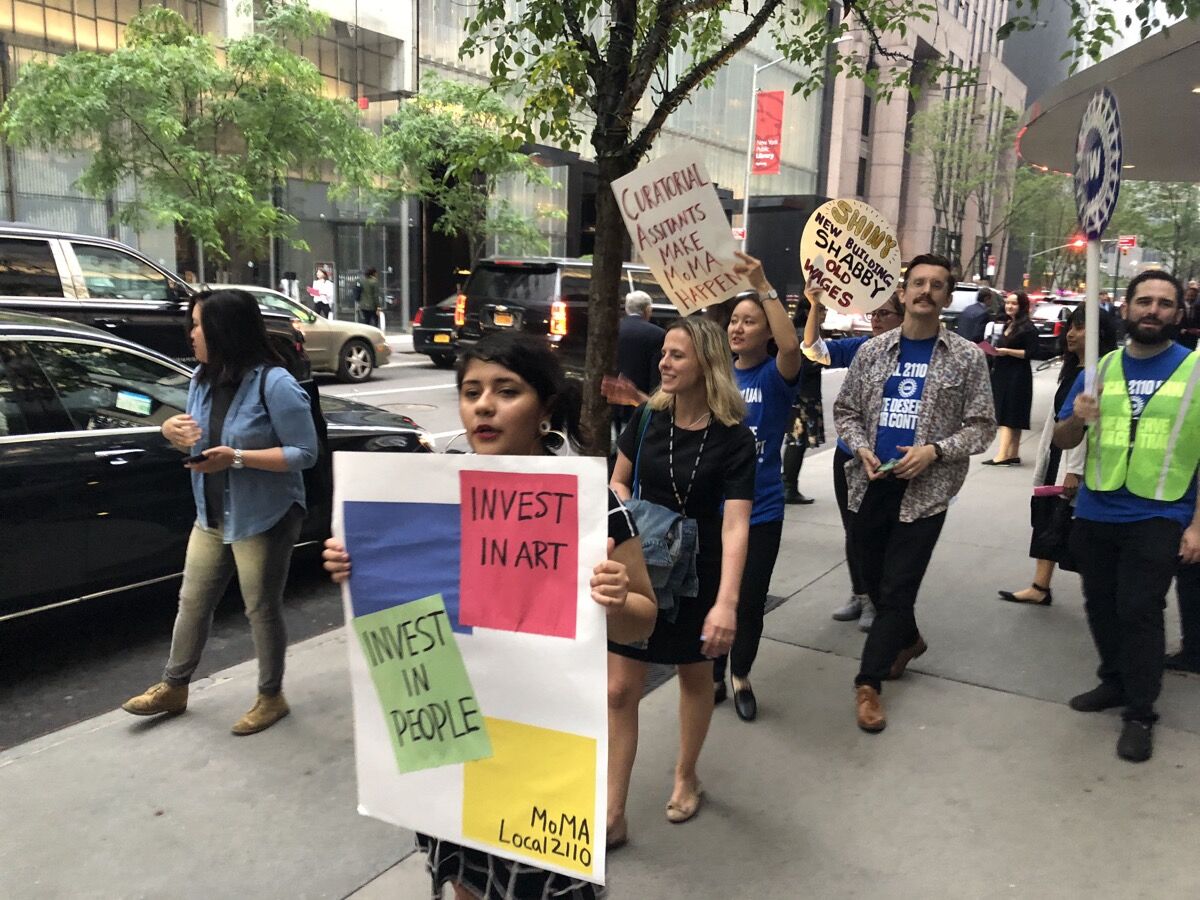 Advertisement
“Those changes hardly should represent a financial problem for this institution,” Fermon said. “But the Museum is recalcitrant, generally, on these [issues], as well as our proposals for overtime pay.”
A spokesperson for the museum said the two sides were making progress. “We’re confident we’ll arrive at an amicable resolution, as we have during prior negotiations with Local 2110 and our four other unions,” the spokesperson said.
Local 2110 members last renegotiated their contract in 2015. That process was also drawn out, requiring employees to work without a contract and spurring a similar round of protests, leafleting drives, and a sustained social media awareness campaign. This time, all the extra work required in anticipation of the expansion’s opening has intensified many of the issues—and the construction project’s nine-figure budget makes the museum’s refusal to give $400 health reimbursement accounts to more workers especially galling. The expansion “is one of the reasons we’re overworked,” Fermon said, calling it “a driving force behind much of the frustration and anger about the bargaining.”
In 2000, a similar negotiation deadlock in the midst of a major MoMA expansion project ultimately led Local 2110 workers to strike in April of that year. That walkout lasted for 134 days, finally coming to an end at 3 a.m. on a September morning following a 15-hour bargaining session.
The Local 2110 bargaining committee’s next meeting with MoMA administration is scheduled for the week of August 6th. Rosenstein is resolute. “We don’t intend to give in.”
Benjamin Sutton is Artsy’s Lead Editor, Art Market and News.
Related Stories