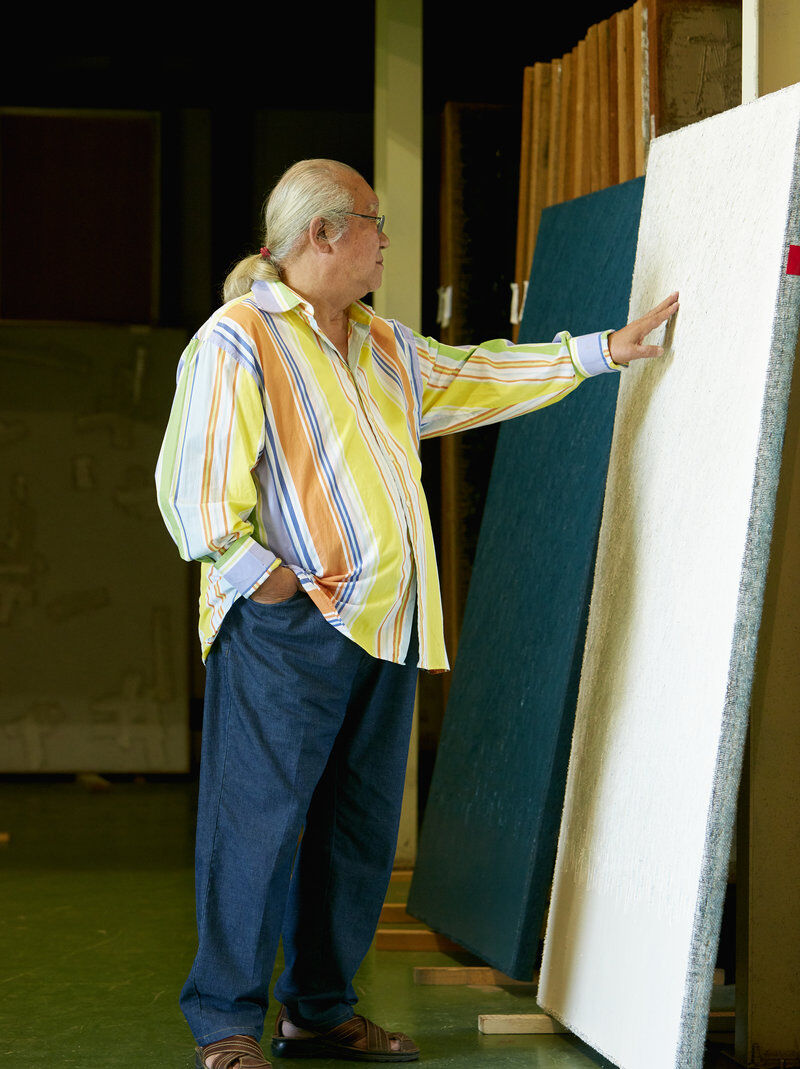 Conjunction, the title that Korean artist
Ha Chong-Hyun
has given all of his paintings since the early 1970s, is also the title of his most recent solo show at Tina Kim Gallery in New York. Ha also describes his personal artistic philosophy, which manifests in works that merge the purity of painting with his own physicality, as one of conjunction. 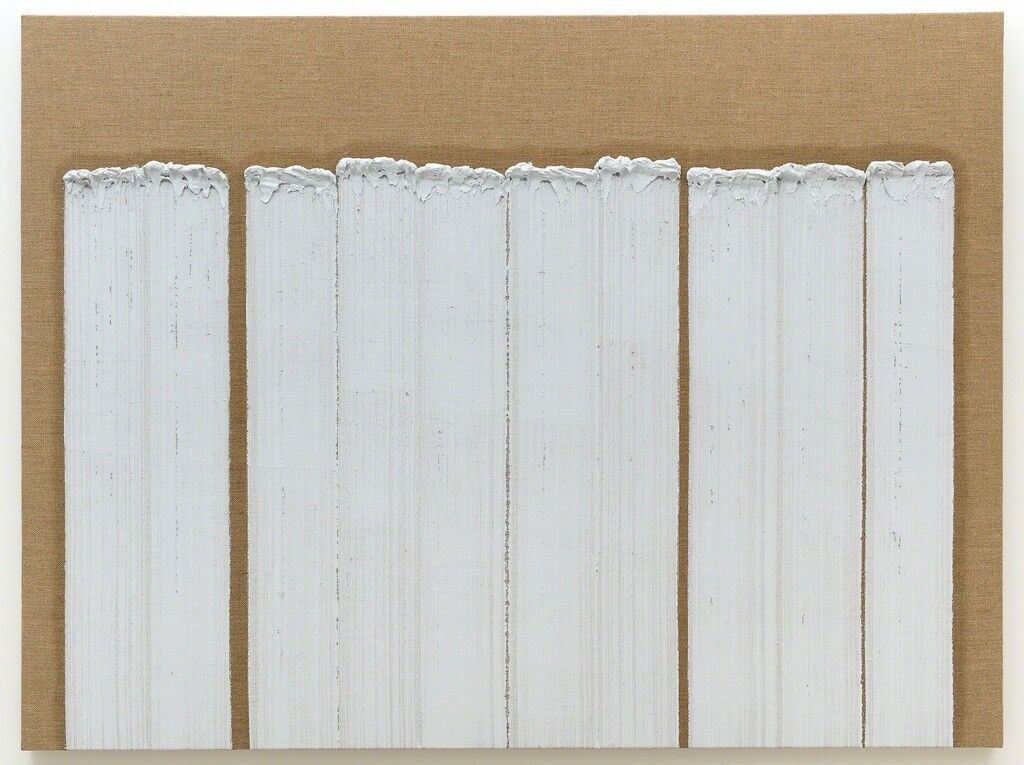 Ha Chong-Hyun
Conjunction 15-214, 2015
Tina Kim Gallery
Chong-Hyun is one of Korea’s most acclaimed artists and a leading member of the Korean movement known as Dansaekhwa. Often translated as “School of White,” this diverse artistic movement grew out of the turmoil following WWII and the Korean War. Decades later, Chong-Hyun and his Dansaekhwa paintings are having a much-deserved international moment. In addition to the artist’s current solo show, he’s seen recent interest, including an acquisition by MoMA last year and impressive auction results—one of his paintings recently surpassed the high estimate at a Christie’s auction, selling for HK$1,120,000 (US$ 145,171). In a feature around the resurgence of Dansaekhwa this fall, Chong-Hyun told the New Yorker, “I’m eighty-one years old. Back in the day, Koreans didn’t live this long. I shouldn’t be here. But to have this happen in my lifetime, I can’t be more thankful.” 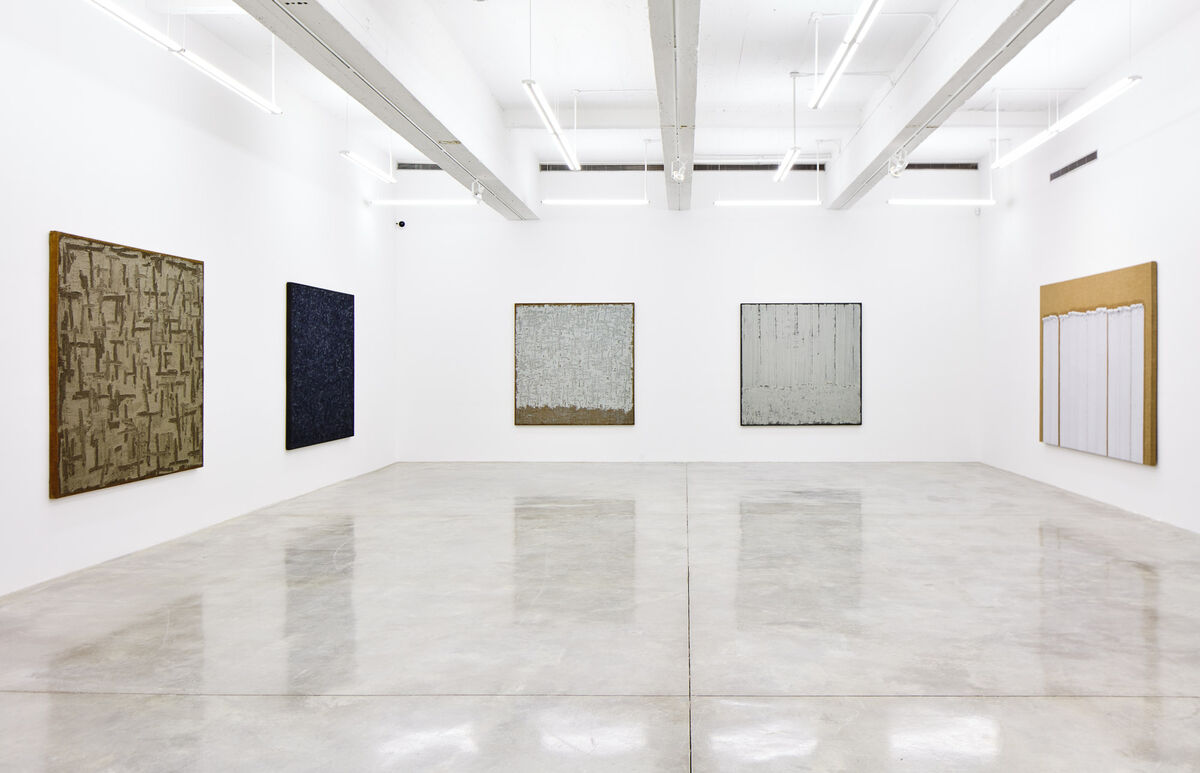 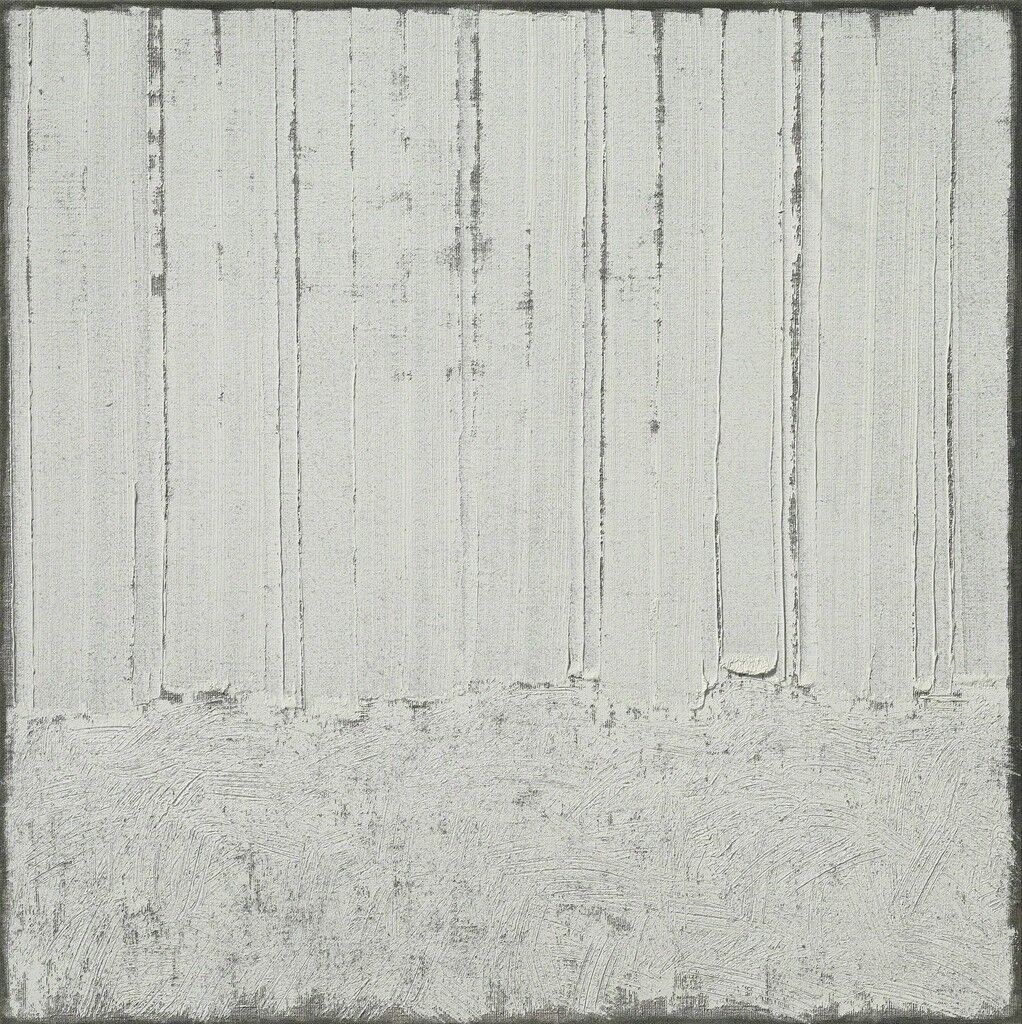 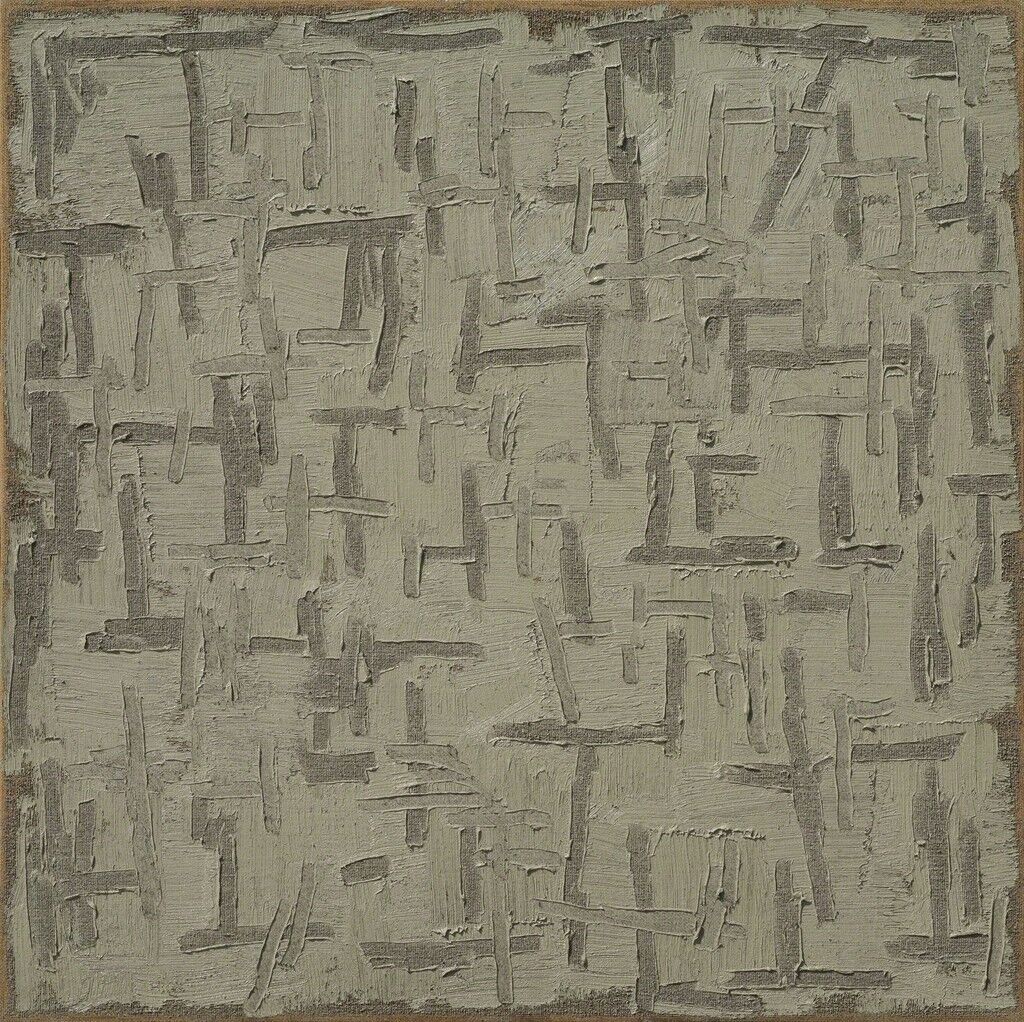 Ha Chong-Hyun
Conjunction 96-151, 1996
Tina Kim Gallery
Chong-Hyun has been credited with playing a significant role in bridging the avant-garde traditions of the “East” and the “West.” As the artist has said, “my studio practice continues to be based on experiments with processes and new techniques through which to create work.”
Chong-Hyun’s work has three signature characteristics. One is the use of burlap, the same material that was provided by the U.S. to transport relief goods during the war. In this way, burlap references the poverty of postwar Korea, which the artist himself lived through. Second is his technique of “bae-ap-bub” (back pressure method), a physically demanding studio process where he pushes thick layers of paint through the backside of the burlap weave to the foreground, creating a textured surface. Finally, the artist is known for his muted palette of earth tones, which includes colors from his own landscape, meant to evoke the dusty streets and black roof tiles of traditional Korean villages. 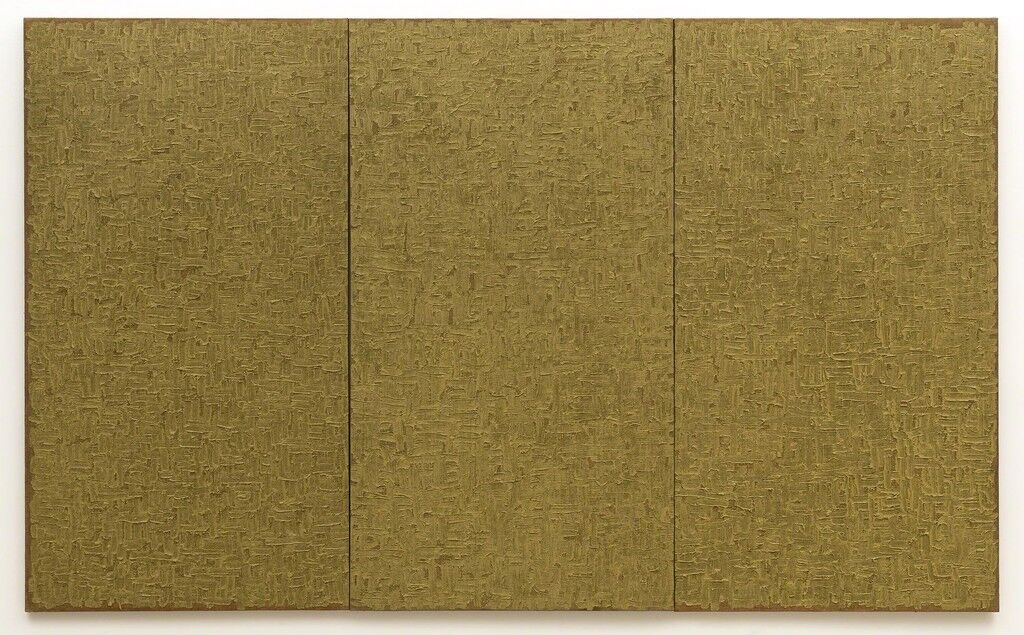 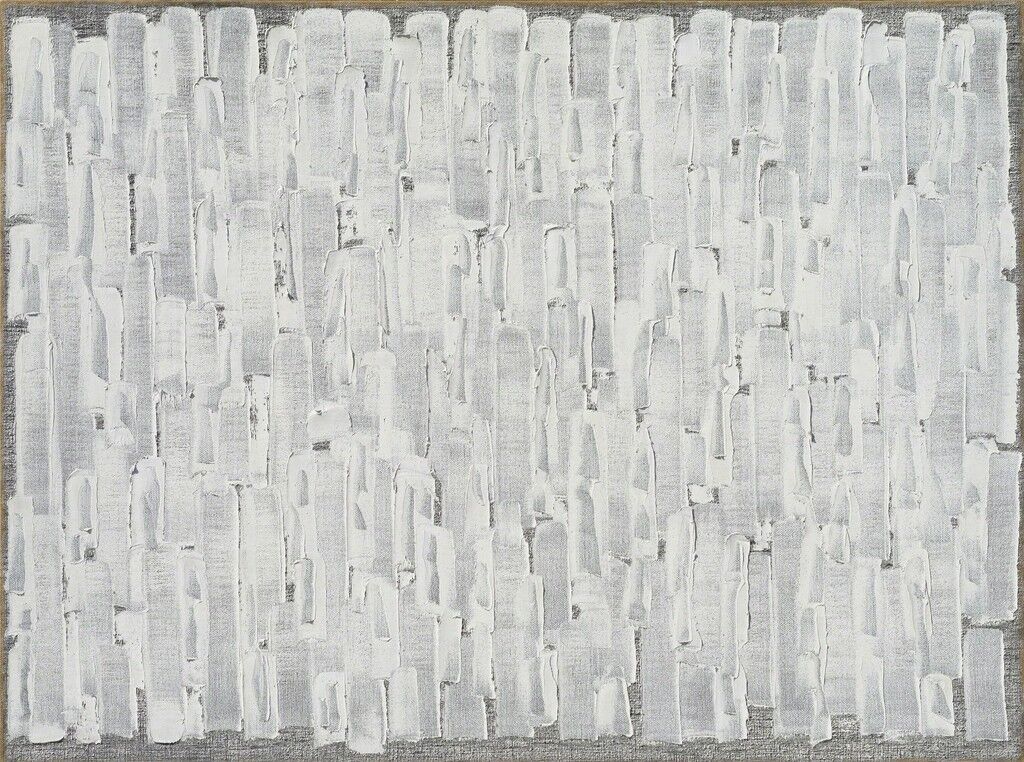 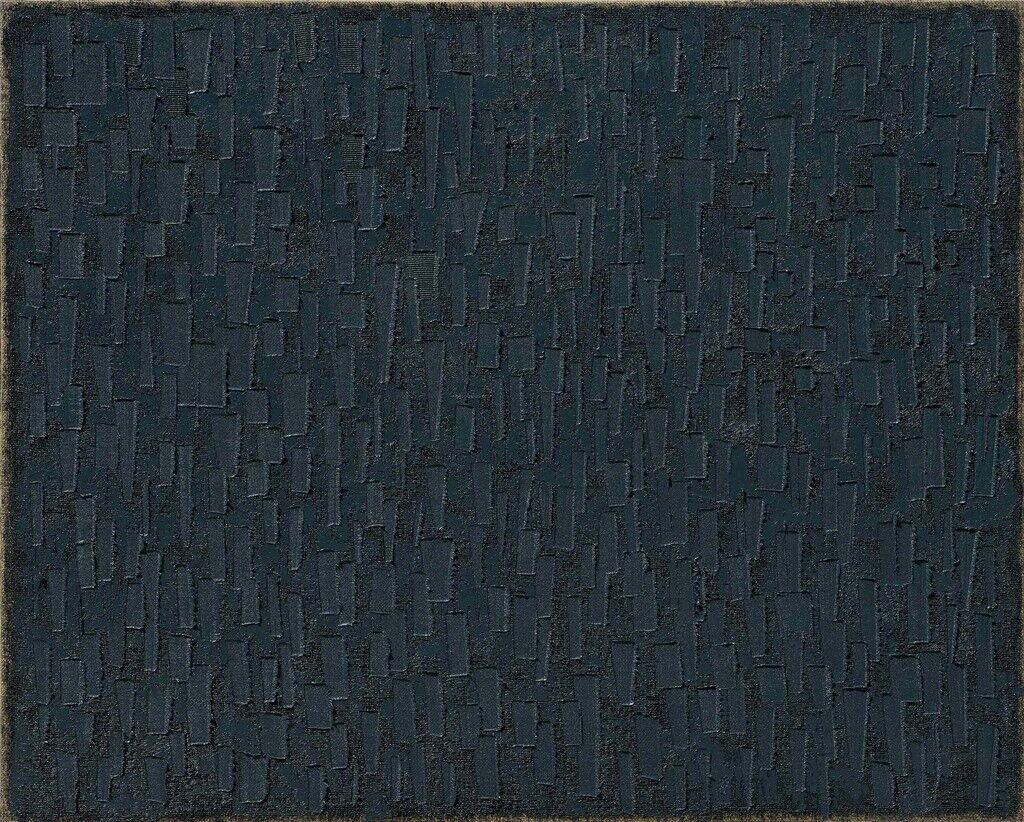 Ha Chong-Hyun
Conjunction 14-113, 2014
Tina Kim Gallery
His current show includes historical works as well as new pieces created specifically for this exhibition. Chong-Hyun’s addition of smoke as part of his palette is a notable characteristic of his latest works. By exposing his works to smoke, the painted surfaces become speckled with soot, resulting in changes in color and texture. The process of modifying his materials is a significant aspect of these newest “Conjunction” paintings. Even now in his 80s, Ha demonstrates that it is never too late to try something new.