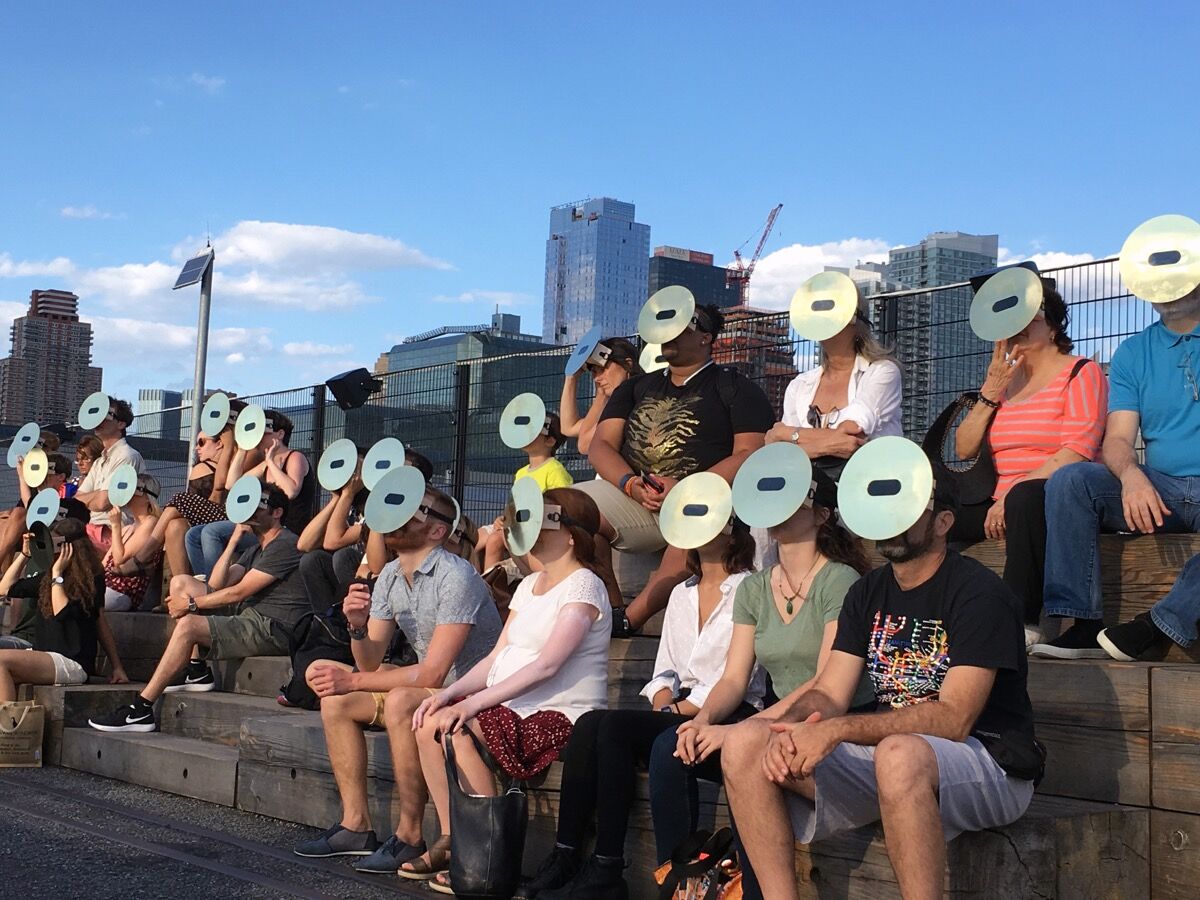 Just minutes before 8 p.m. on Tuesday evening, a small crowd was forming on the High Line’s northern reaches, near West 32nd Street and 12th Avenue. Unsuspecting passersby paused from their evening strolls as the artist
Eduardo Navarro
approached, placed a futuristic bronze mask in their hands, and said: “Put this on, you’ll like it; it starts in one minute.” They settled into seats on wooden steps facing west, where the soon-to-set sun hovered above Weehawken, New Jersey. And as they fixed the contraptions to their faces, a serene voice advised them to stare at the sun.
“Allow some time for your eyes to adjust to the dark,” said astrophysicist Jana Grcevich in a soothing monotone, standing before the crowd with a microphone. “And focus on the green sphere. All the light you are seeing through your mask originates from the sun.” Navarro collaborated with Grcevich and fellow astrophysicist Summer Ash to realize this new site-specific performance, We who spin around you (2016), presented by High Line Art. Its run is just three evenings, with four performances each night; the last one ends at sunset. And while it’s a peculiar sight for those who are not partaking, the crux of the performance happens within the mind of the participant.
While wearing Navarro’s sun-safe mask—crafted with the solar-filtered glass lens that NASA recommends for viewing the sun—the participant’s field of vision goes black, save for the sun, which remains as a green orb. Coupled with this unusual visual field is a lecture, read by one of the astrophysicists during each performance. The script, written by Grcevich and Ash, is a mesmerizing, smartly abridged narrative of solar history, followed by a series of remarkable facts. While some are purely interesting (“The Earth is 93 million miles away [from the sun].… If you could fly there at the speed of an airplane, it would take nearly 20 years to reach”), others might incite an existential crisis, reminding us how small we are in the grand scheme of the universe (“The sun accounts for 99.9% of the material in our solar system…all of the planets combined, including humanity and all its creations, are merely the fraction of a percent of debris left over from its formation”). 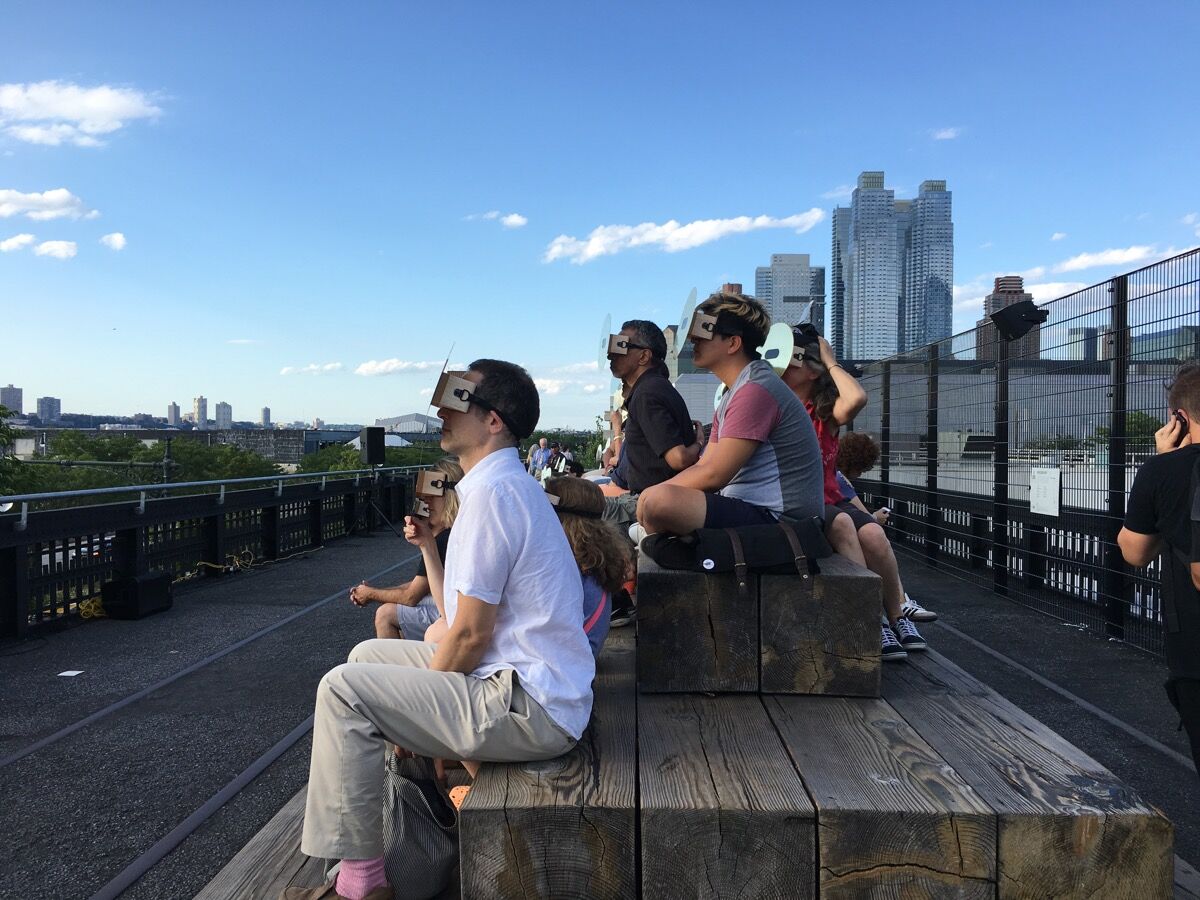 Eduardo Navarro, We who spin around you, 2016 (production image). A High Line Performance. Courtesy of Friends of the High Line.

Based in Buenos Aires, Navarro has been known to tap into science, the universe, and the natural world through his artistic practice. He describes his works as case studies. Recently, he has experimented with litmus paper and the sulfurous fumes of a volcano in Ecuador; sent a troupe of performers frolicking across Randall’s Island at Frieze New York, guided by the clouds; and earlier this year, at the Museo Tamayo in Mexico City, staged Octopia (2016), a performance in which 80 participants mimicked the nervous system of an octopus. For a new series of drawings, on view now at Galeria Nara Roesler in New York, he created images of domestic objects with sugar water on tracing paper and baked them in an oven.
At the end of the first evening of Navarro’s High Line performances, after the sun had fully set, the artist watched as participants returned their masks, seemingly content with the way things had played out. He estimated that over half of those who partook happened upon it by chance, led by curiosity. “There’s something hypnotic about the sun,” he mused. “You can observe most natural things, but the sun is the only thing that you cannot stare at directly. And at the same time, it’s the origin of life; it has created life on Earth.”
Casey Lesser is Artsy’s Lead Editor, Contemporary Art and Creativity.
We who spin around you is on view at the High Line at West 32nd Street and 12th Avenue, July 19–21, 6:30–8:30 p.m. Performances begin every half hour.
Related Stories