Meet the Artist Who Is 3D-Printing Artifacts Destroyed by ISIS

Artsy Editors
Feb 18, 2016 5:18pm
Though routinely described as “medieval,” the terrorist group ISIS has proven remarkably adept at using 21st-century technology to propagate images of power. Over the past few years, ISIS-produced videos have emerged from Syria and Iraq showing long-cherished ancient artifacts shattering under the weight of ISIS members’ sledgehammers and whirring drills. For her first solo exhibition in Canada, Iran-born artist Morehshin Allahyari offers a response to this destruction through “Material Speculation: ISIS,” a series of 3D-printed plastic sculptures that are recreations of artifacts destroyed by the terrorist group. On view through March 19th at Toronto’s Trinity Square Video, the works unabashedly place art in the realm of politics and activism. The product of painstaking research, each sculpture is embedded with a chip that contains archival data about the original artifact. They’re not replacements, as such, but rather new objects that speak to the history of the Middle East while maintaining the poetic, elegiac quality of a message-in-a-bottle or a funeral mask.
Broadly speaking, Allahyari’s thoughtful use of 3D printing provides a glimpse into a technologically driven future. There is no doubt that 3D printing will reshape our world, but the question of how the cutting-edge medium will become entwined with the ancient remains ripe for, well, material speculation. I corresponded with Allahyari over email about the origins of the series, the role of art in the battle against ISIS, and her plans to allow us all to join in her resistance by distributing the artifacts’ 3D-printable files for free on the internet.
Isaac Kaplan: Do you think of “Material Speculation: ISIS” as art or activism? Are those categories distinct?
Morehshin Allahyari: I think about it as both art and activism. So many of my projects, including “Material Speculation: ISIS,” are a combination of both. I don’t see a distinction between them in a way that would exclude one or the other. As an artist born and raised in a country like Iran, where I spent most of my life, I never had the privilege of thinking about art as only a decorative and visually pleasing medium. Politics was inserted into every small aspect of life in Iran, so I ­very organically­ saw my art practice as a way to address, criticize, and raise awareness about the political and cultural issues around me. As a new-media artist or art activist, there is something really beautiful and important about going beyond aesthetics and the fetishization of technology. 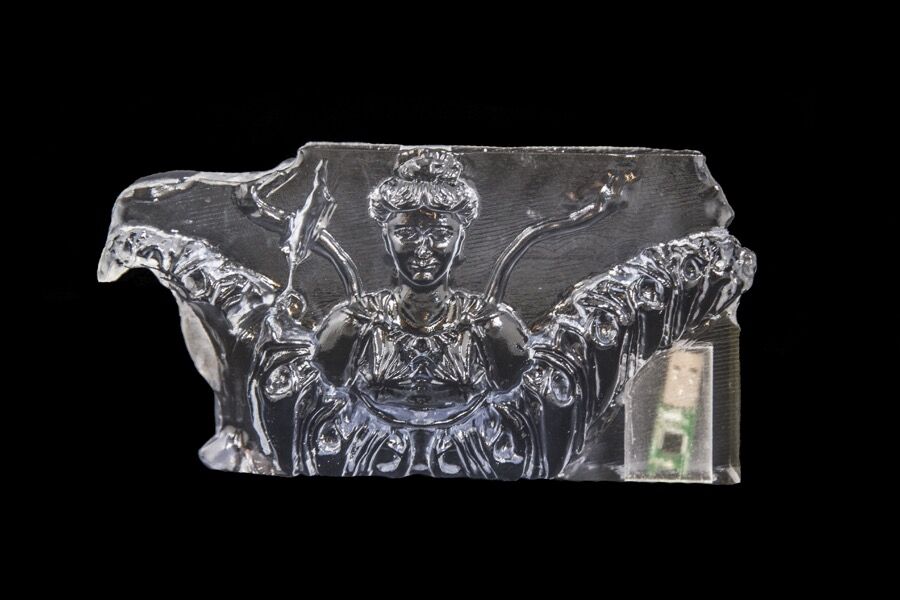 Advertisement
IK: What inspired you to 3D-print those works and embed the artifacts’ information in them?
MA: Over the last three years, I’ve been interested in thinking about 3D printers as poetic and practical tools for digital and physical archiving and documenting. In my “D​ark Matter” ​series, I approached this more from a political and cultural standpoint, focusing on objects that are forbidden or unwelcome in Iran. With “Material Speculation: ISIS,” I wanted to continue the same line of thought, in addition to thinking about concepts related to the Middle East, oil, and jihad, and being inspired by Reza Negarestani’s C​yclonopedia: Complicity with Anonymous Materials​ book.
In the last year I’ve also produced a project in collaboration with artist/writer D​aniel Rourke,​ T​he 3D Additivist Manifesto. An important aspect of our manifesto is the notion of 3D printing as experimental, radical, and censored. How can we think about it as a tool for changing the biological, political, environmental, and social future of our lives? My project fits into some of the actions and ideas in our manifesto, but mostly the ones focused on political activism, re­building, and dissemination of information as resistance to power.
When I was in the middle of this research during my four-month artist residency at Pier 9, the video ​of ISIS destroying artifacts at Mosul Museum and other sites in Iraq went viral. Watching those videos was really upsetting, not from a nationalistic standpoint, but just the very act of destruction, violence, and wanting to ruin historical heritage as a political and religious message or as a display of power. This, for me, came with so many layers of personal relationships, and it made sense to integrate it into my research. 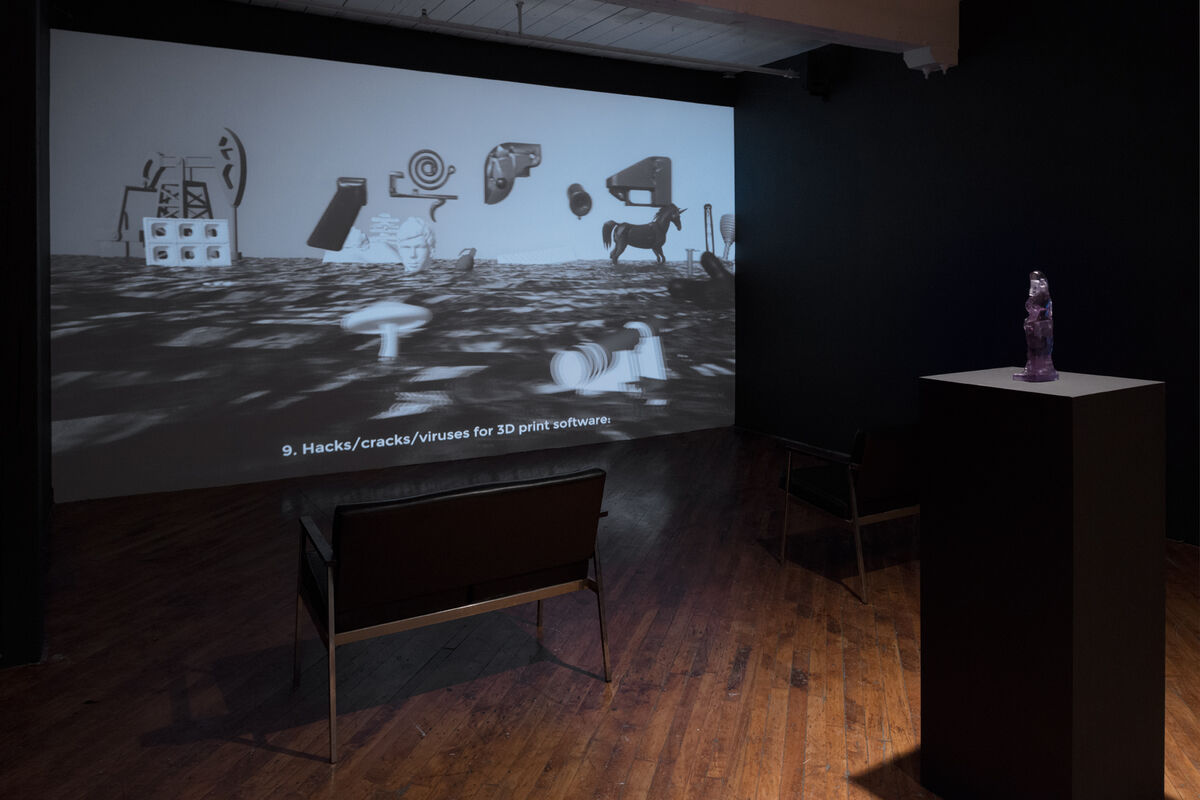 One of the most challenging aspects of this project has been having access to information. I didn’t realize this when I started my research, but finding details about the artifacts was amazingly difficult—from the names of the artifacts (names in English and Arabic) to learning which were copies and which were original, which were historically the most important and why. I had to find all the information about these artifacts from different books, articles, and by doing interviews with different historians, archaeologists, and scholars who specialize on the Hatra and Assyrian era.
Researching and gathering this information became such an important aspect of this project that I wanted to make sure it became a visible and meaningful layer in the presentation of the artifacts themselves—lack of knowledge being replaced with access to knowledge, destroyed artifacts being “replaced” by 3D-printed versions.
IK: What purpose do you think such recreations can serve?
MA: Well, one is its practical purpose, which is the most obvious one. There is no way to really replace these lost artifacts. What is destroyed is lost forever. My project is only creating a reference to the artifacts in the most accurate way possible. But for me, as an artist coming from Iran where these artifacts were part of a shared history between Iran and Iraq (all belonging to the same distant history before Iran and Iraq were separate countries), it serves a personal, emotional, and poetic purpose.
IK: How do you think about the “history” of your sculptures? Are they artifacts? Are they brand-new works? Are they archives?
MA: All of the above. But they are now new artifacts: a re­creation, a re­presentation, a reference to history, to the past. An archive of our present and past.

IK: Can you talk a bit more about your plans to distribute the 3D-printing files over the internet so anyone can print the work for free? Why is that important to you?
MA: I have now completed the construction of 12 pieces, all from the artifacts that were destroyed by ISIS in 2015. In the coming months, I am going to release all the .stl/.obj files (3D-printable files) online for public access. This week I will be releasing all the information that I have gathered about the history of artifacts, PDF files, and images, in addition to one of the .obj files (King Uthal) on Rhizome.org as part of “The Download” series.
I think there is something very important about sharing this project. The more people 3D-print these, or even keep them as digital files on their computers, hard­ drives, flash memories—or read about the history of the artifacts—the more we have collectively resisted the act of forgetting. I am still in the process of figuring out how to share the information that I have gathered, and also finding a museum that can preserve and conserve these digital files. I think the concept of collective archiving and collective memory is what I am interested in the most.
—Isaac Kaplan
“Morehshin Allahyari – Material Speculation” is on view at Trinity Square Video, Toronto, Feb. 11–Mar. 19, 2016.
Related Stories