An Iraqi Artist Channels Grief and Nostalgia in “Reconquista” 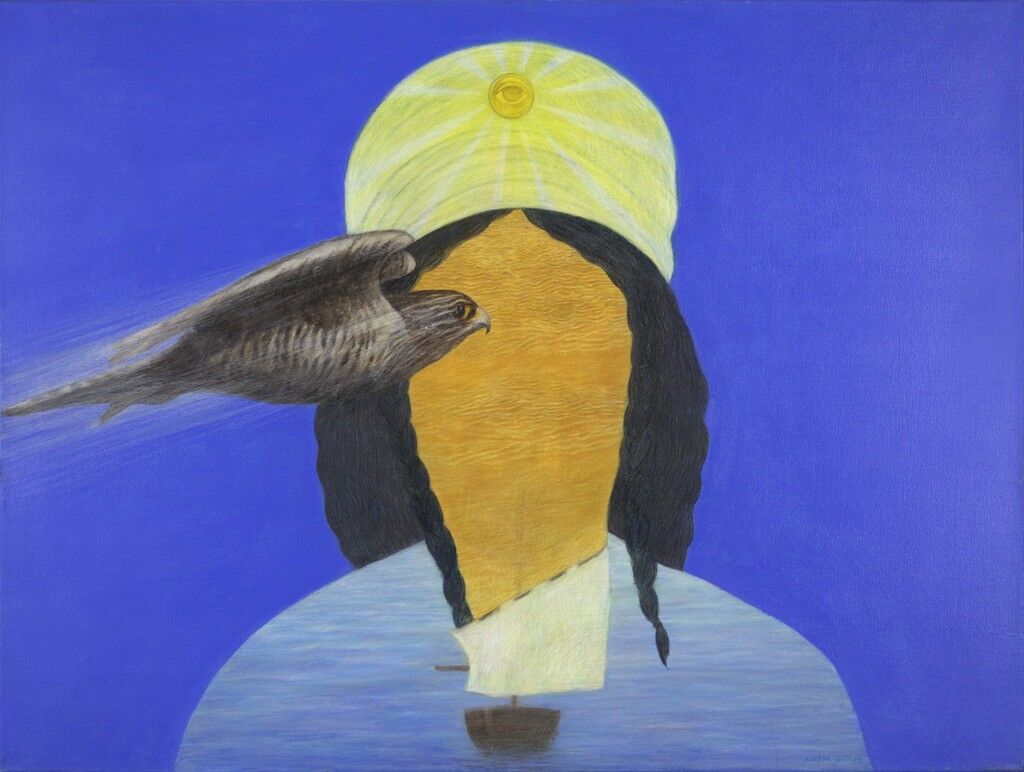 Nazar Yahya
Falcon of Andalus, 2014
Meem Gallery
The Moor in question is Abu Abdullah (c. 1460-1533), the last Arab leader of Granada, which was, in turn, the last Islamic kingdom in Western Europe. Abdullah was forced out of his country by King Ferdinand and Queen Isabella of Spain in 1492. As the story goes, before retreating into exile, he let out one last sigh as he looked back at the city’s glittering palaces.
This feeling of dislocation is something that Yahya understands all too well: born and raised in Baghdad, the artist was pushed out of Iraq during a war that ravaged the country. He now lives and works in Houston, Texas. And while his new solo show at Meem Gallery, “Reconquista,” makes specific reference to the surrender of Granada, it’s not difficult to see the parallels between past and present—and to read Yahya’s works as meditations on timeless themes of memory, grief, and isolation. 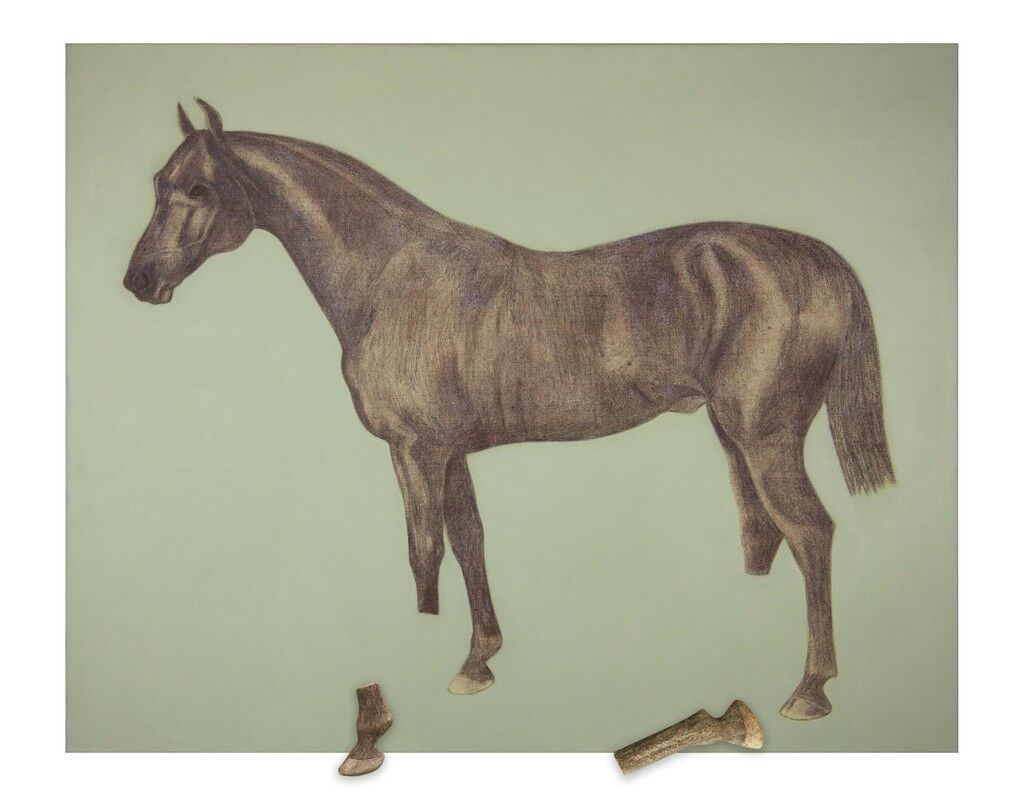 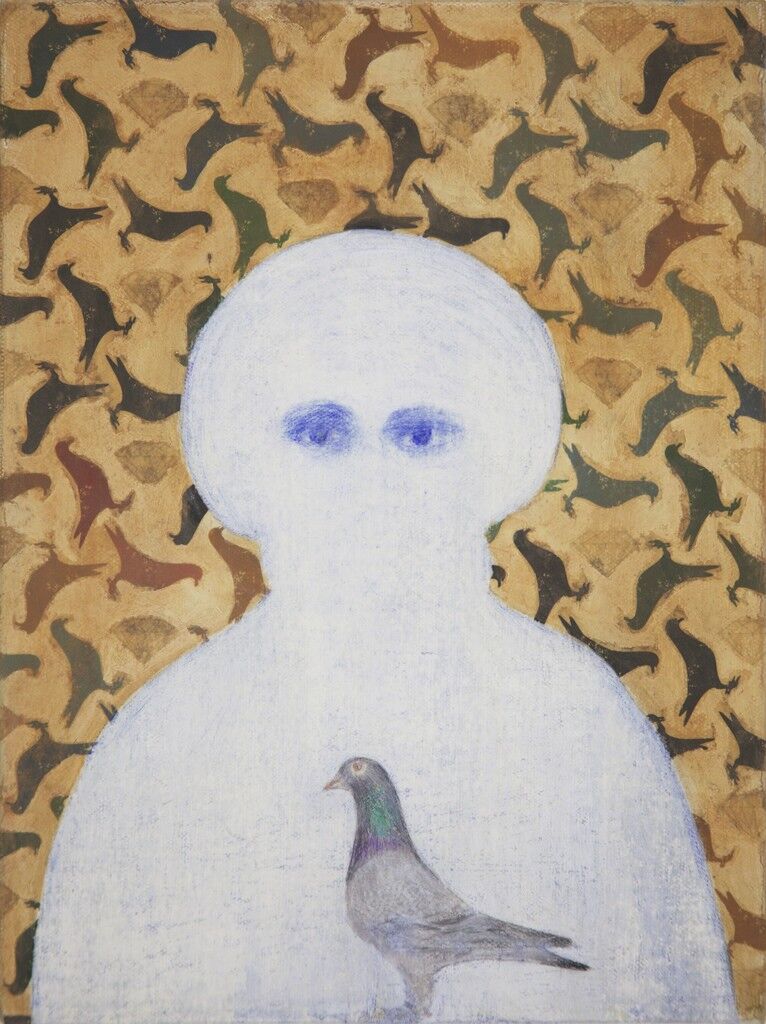 Nazar Yahya
Homage to Ibn Rushd (Averroes) 2, 2014
Meem Gallery
Advertisement
Yahya readily acknowledges the “personal pain” of leaving Iraq as a driving force behind his work. “I try to investigate the answers provoked by my personal confrontation with a changing world; the antiquated remains of war, wandering from one country to another, accepting expatriation finally as a late psychological outlet,” he writes. That meditation pervades Yahya’s latest series, whether in works featuring human figures, like Homage to Ibn Rushd (Averroes) 2, where blue eyes gaze mournfully from a ghostly figure, or in the heartbreaking Adult's Toy (both 2014), portraying an elegant horse whose hooves have been snapped off, as if the animal was hewn from plastic. 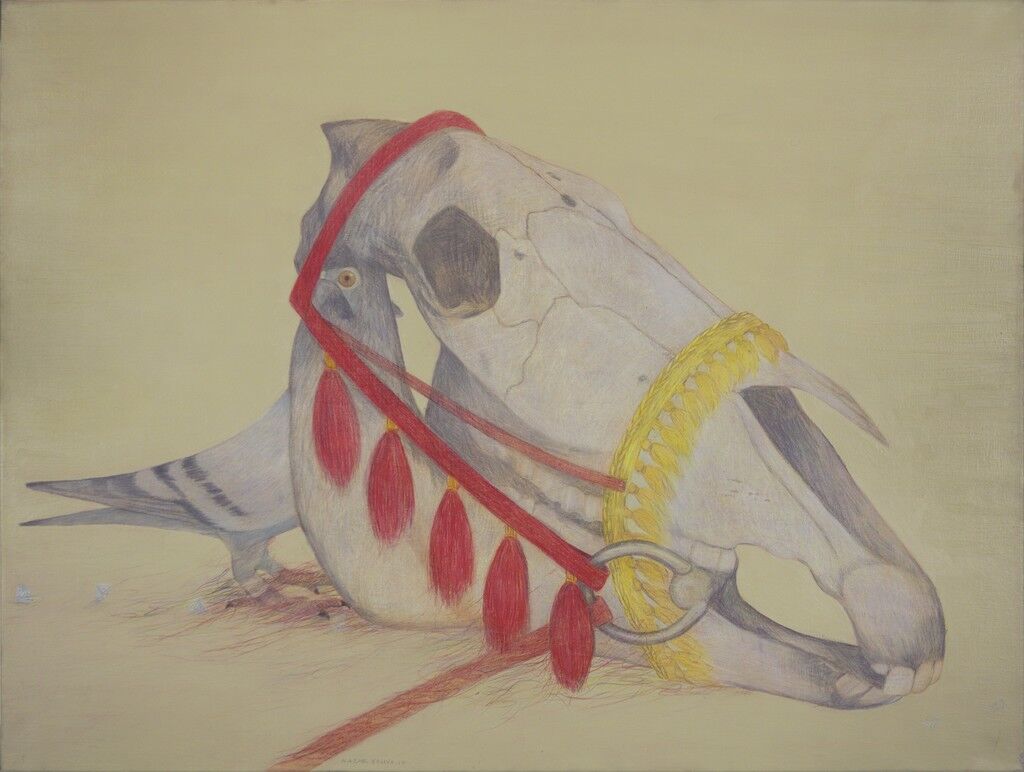 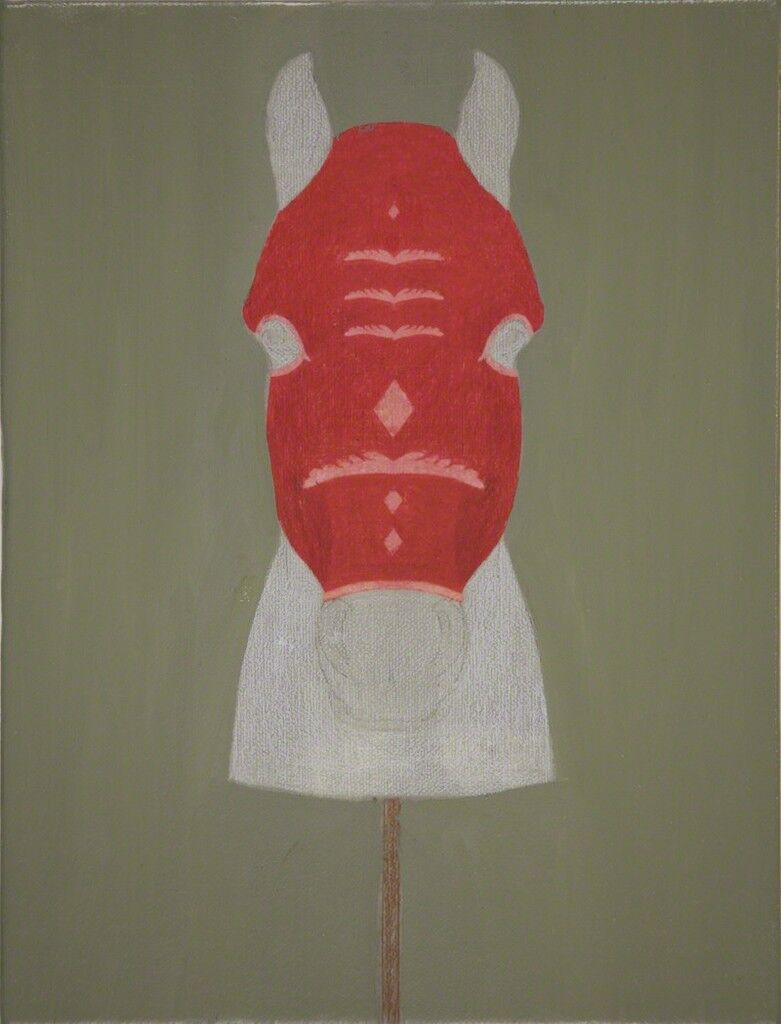 Nazar Yahya
Homage to Ibn Rushd (Averroes) 14, 2014
Meem Gallery
Across the gallery, horses are represented in various states—maimed, armored, submissive, propped on sticks like toys, and lifeless. Gathered together, they become stand-ins for soldiers and the many roles they play, from valorous martyrs to puppets being pulled by the government’s strings. “The horse is the obedient, acquiescent soldier who is the conduit for these types of wars,” Yahya explains of his use of the horse in the exhibition catalogue. “The Arab horse is never mentioned or valorized in Arab poetry in the way that the soldier or fighter is…despite the beauty of the features of the Arab horse, [it] reminds me of the preparations and exercises we would do in the army, so as to appear more dangerous on the battlefield.” 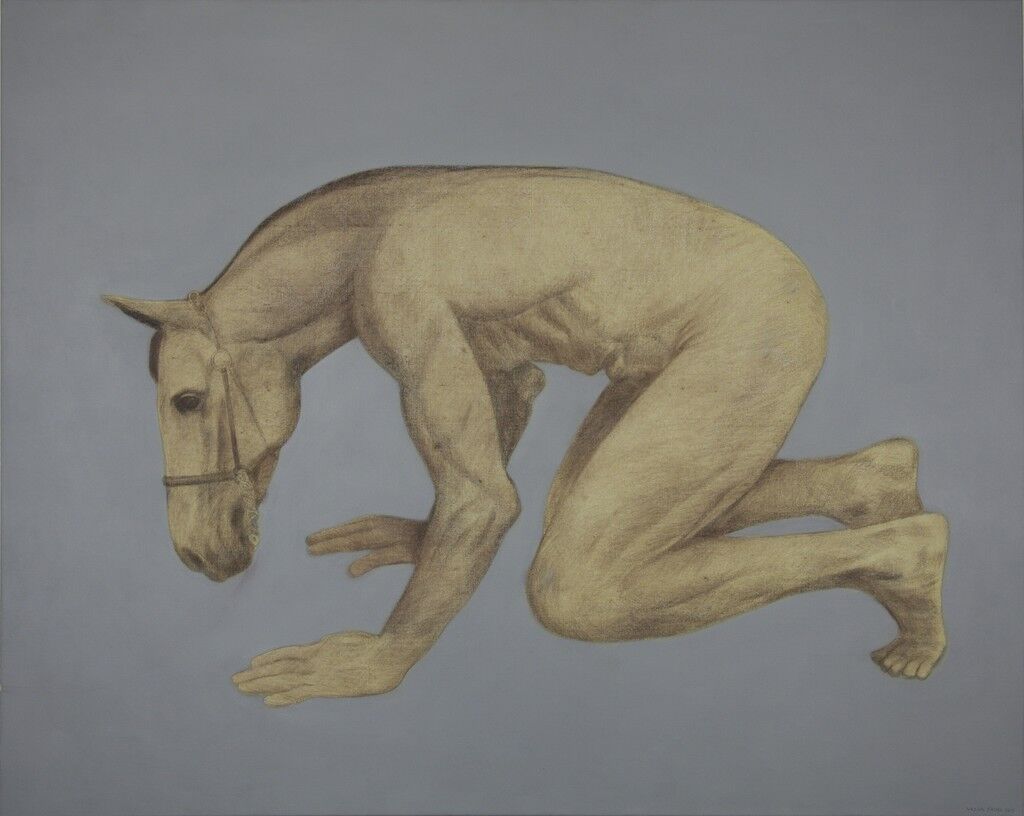 Nazar Yahya
Transition, 2014
Meem Gallery
In Transition (2014), Yahya fuses the head of a horse, hung deferentially, to the muscular, albeit naked body of a man. The hybrid creature crouches, alone and exposed, on a gray background. It is a powerful symbol for the plight of a soldier—one that resonates historically and within the context of the war-torn contemporary Arab world.
Strung with works rich in symbolism related to displacement and war, the show is a potent meditation on the legacy of ongoing conflict. But Yahya’s work isn’t all doleful. One of the most affecting pieces—an installation reminiscent of a Andalusian hammam—offers a quiet, calming coda. As you step inside, a medley of alluring smells and sounds surrounds the viewer. This warm, mystical environment might just inspire a sigh—one steeped in the same feelings of admiration and longing that informed Abu Abdullah’s reaction as he looked back at Granada.
—Bridget Gleeson
“Reconquista” is on view at Meem Gallery, Dubai, Nov. 2, 2015–Jan. 10, 2016.
Follow Meem Gallery on Artsy.
Related Stories