These Andean Textiles Provide Clues to a Complex Ancient Culture 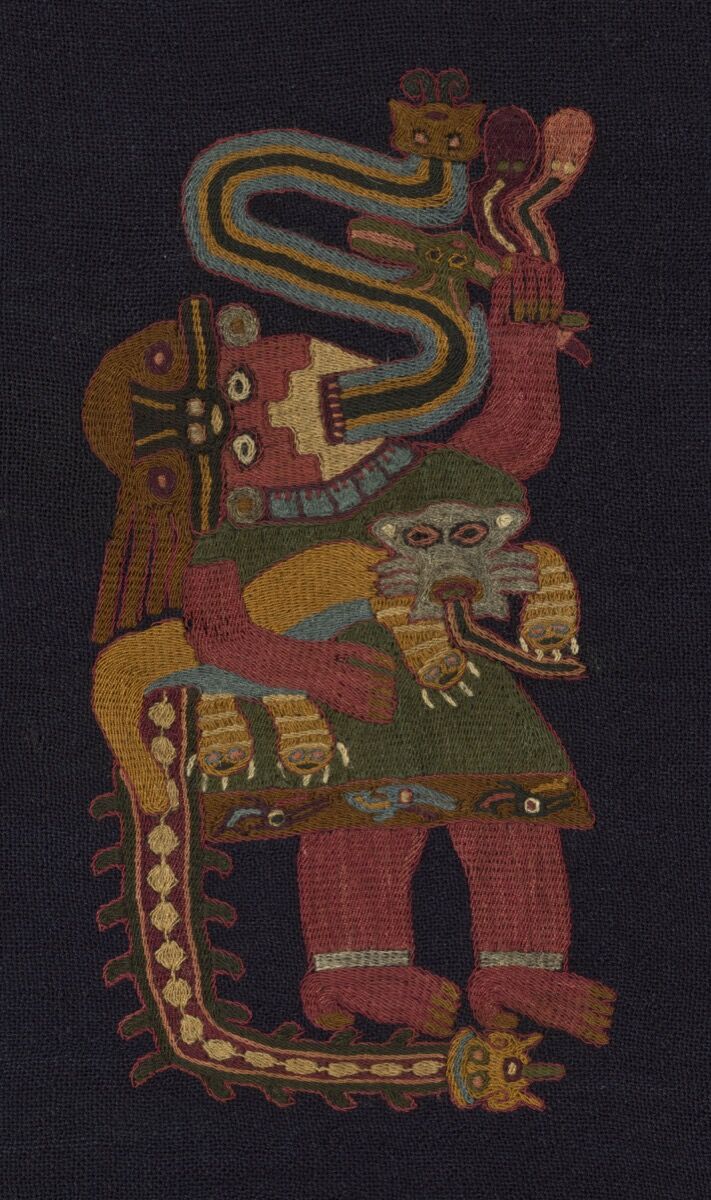 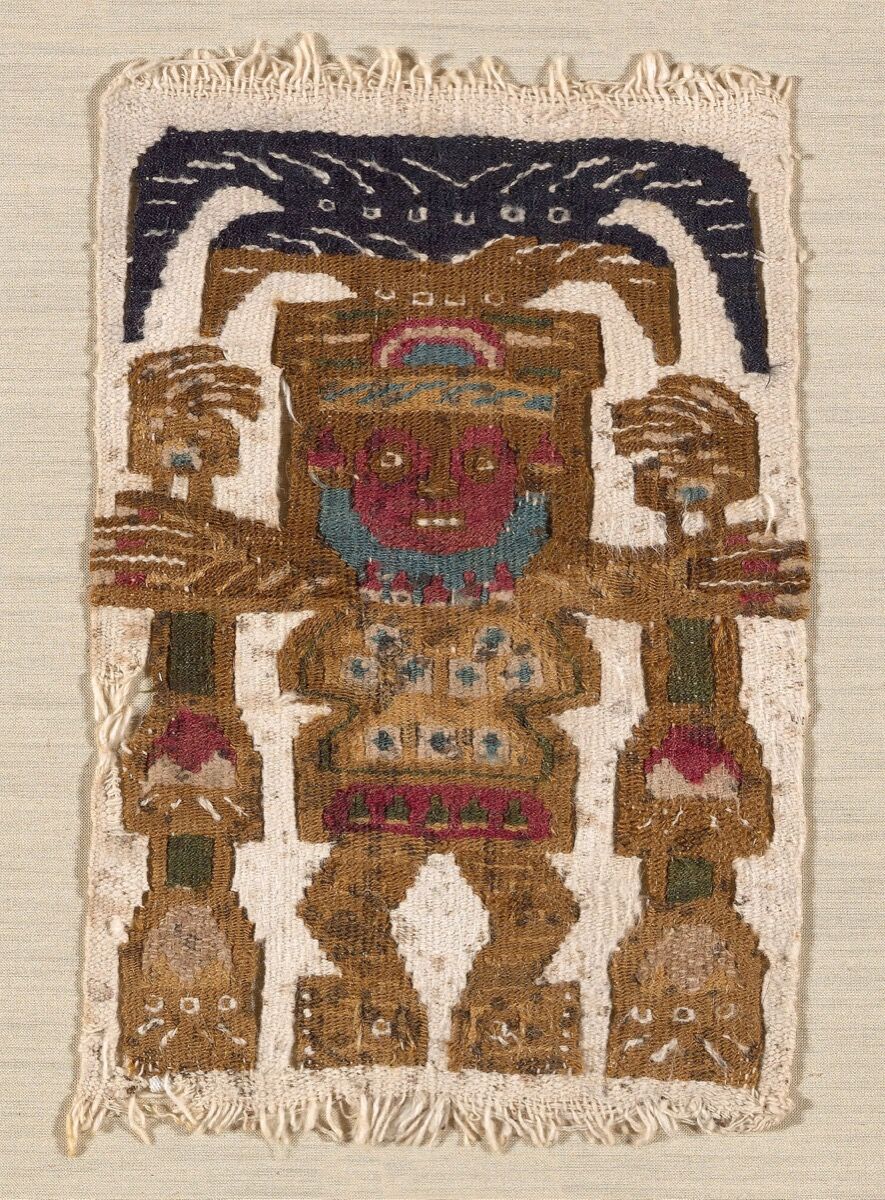 In a region that spans desert coasts to mountain highlands in what is today Peru and northern Bolivia,
textiles
played—and continue to play—an important role in life and death. Textiles became an essential tool for communication in ancient South American civilization, a visual language that described fundamental conceptions of everyday life, the natural and supernatural worlds, and the afterlife. They adorned the walls of homes and temples, and were worn as garments and used in religious rituals, including burials.
A recent exhibition at the Art Institute of Chicago, “Super/Natural: Textiles of the Andes,” featured more than 60 textiles and ceramics from the museum’s collection, and highlighted the intricate designs and innovative techniques that characterize the textiles produced across five distinct coastal Andean societies: the Paracas (500 B.C.E.–C.E. 500), Nazca (1–700), Chancay (1000–1450), Lambayeque (1000–1476), and Rimac (1100–1470), as well as modern highland communities keeping these traditions alive today. These historic techniques are now re-energizing traditional thinking on the production of textiles globally. 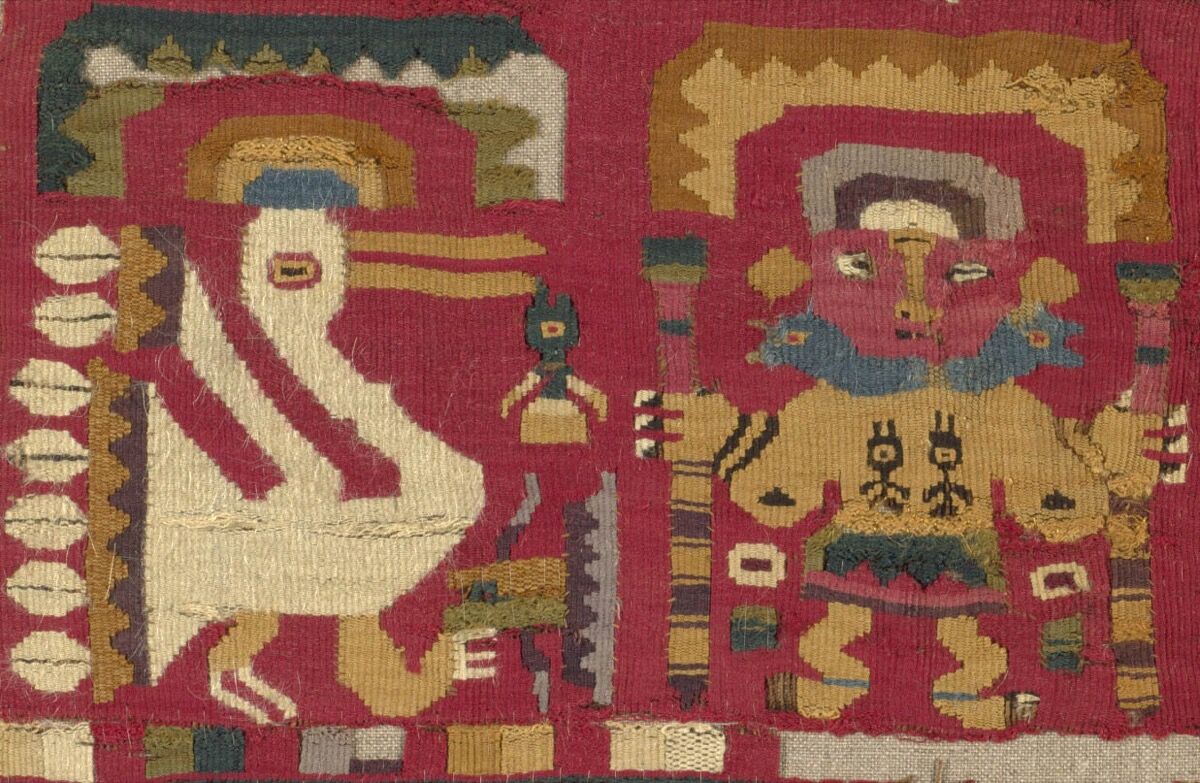 Historically, scholars propose spinning yarn and weaving textiles were primarily women’s work. This is a feminine connection that persists in textile and fiber arts all over the world. Yet there’s nothing particularly “feminine” about the motifs that appear in the textiles and ceramics from across these cultures. Despite their differences, they shared primary beliefs, especially respect for nature, an almost divine connection between the human and animal domains, and the continuity between life and death.
In the exhibition, women’s handicraft is evidenced by an intricately-painted ceramic bowl produced between the second and eighth centuries. A workshop populated by seated women weaving diligently on backstrap looms circles around the inner rim of the bowl. The careful depiction of the weavers on the artifact speaks to the centrality of textile production in the ancient Andean region.
The finely-wrought tunics and mantles embellished with colorful, detailed embroidery worn to political and religious events by the ruling class of the Paracas, who inhabited the southern coast of Peru for about 1,000 years, from 500 B.C.E. to 500 C.E., clearly communicated their superior status and wealth. One mantle dated 100 B.C.E.–C.E. 200 features over 50 embroidered figures that strut across the colorfully-dyed garment. The elaborately-stitched tunics, headdresses, and ear ornaments denote their divine status. The figures each carry a pet—what scholars can identify, by its pronounced stripes, as a Pampas cat, a handy predator who scared vermin and other destructive animals away from crops. It’s unclear what is meant by the winding motifs that erupt from their hands and mouths. The exhibition wall text suggests that they “mimic the cats’ protruding tongues and signify the effort to embody the supernatural forces that govern the natural world.” 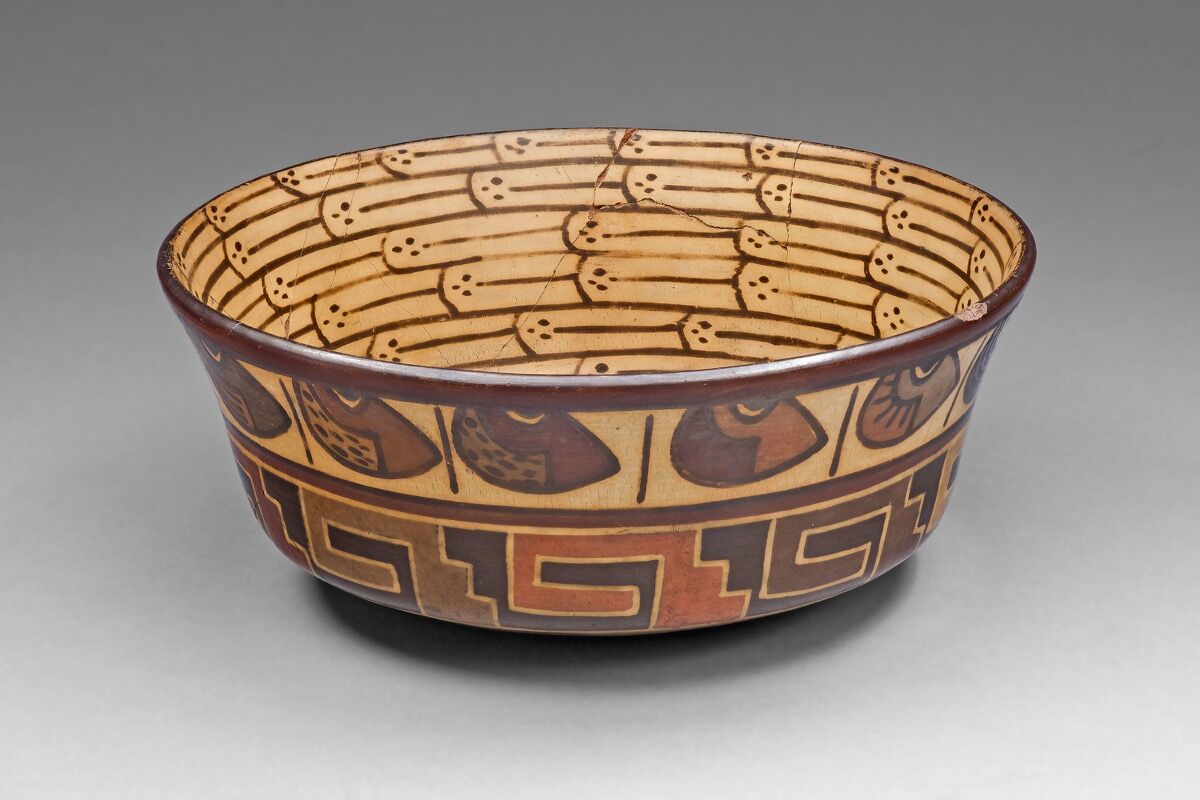 Bowl with Bean and Architectural Motifs, 180 B.C.E.–C.E. 500. Courtesy of The Art Institute of Chicago.

Advertisement
Such garments were so profoundly significant that they often followed their owners to their graves. During excavations in the early 20th century, archeologists discovered high-status cemeteries where the dead were bundled in dozens of textiles, put on during sacred rituals that prepared them for the afterlife. In one grave, over 400 distinct cloths were uncovered.
The varied geographies and economies of the coastal cultures along the Andes also impacted their art. The Nazca, who lived along the southern coast of Peru from 1 to 700, was a primarily agricultural society. Every aspect of their remarkably detailed compositions, from their subjects to plant-based dyes like indigo, emphasizes the abundance of the natural world. Their textiles share motifs with the contemporaneous Paracas but employ complex woven and looped weaving techniques to create three-dimensional plant and animal forms in vibrant colors.
One of the most enduring and exotic legacies of ancient Andean civilizations is undoubtedly human sacrifice. In the show, depictions of these rituals are present in ornate woven and ceramic artifacts, associated with more urbane aspirations like bounty and a good harvest. One textile fragment shows an enslaved individual who has been chosen for sacrifice. He is dressed humbly, in only a loincloth, while the warriors surrounding him appear like majestic peacocks. Across the gallery, a ceramic bowl shows the aftermath of the event: Painted plants poke through the mouths of the decapitated heads, a clear signal of “the bounty that results from sacrifice,” the wall text reads. 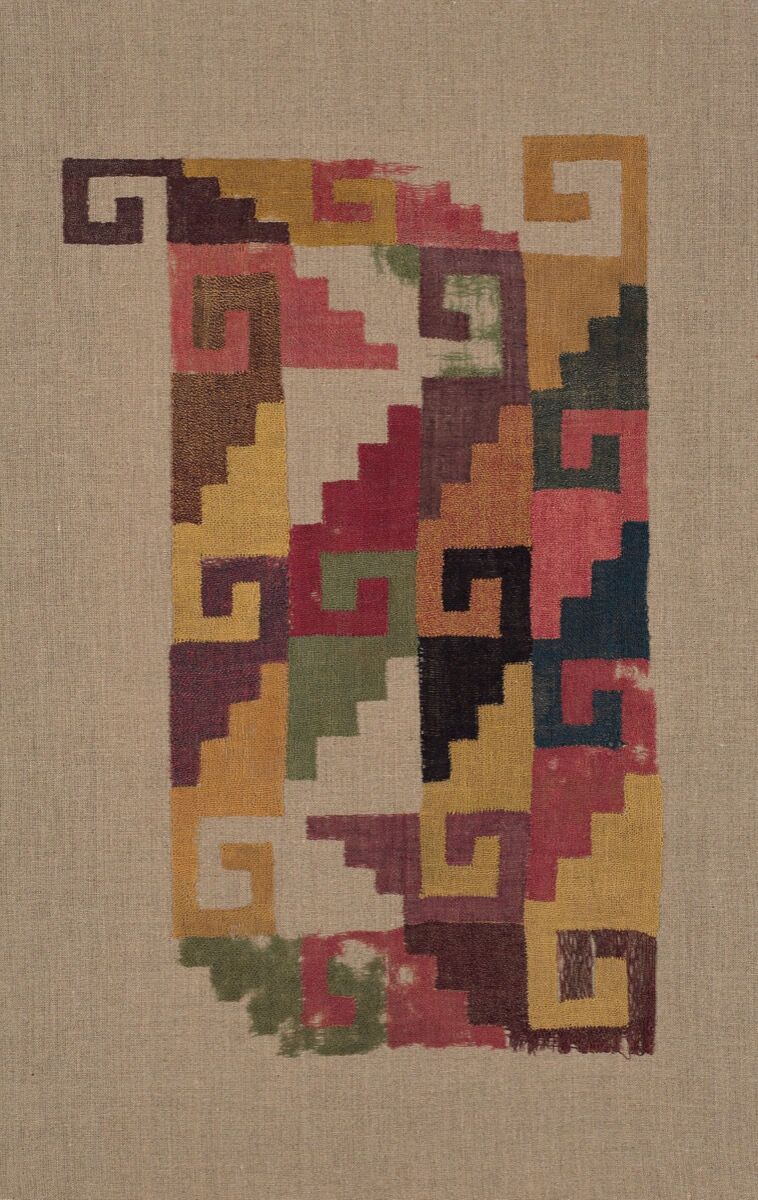 Panel Fragment , 200–500. Courtesy of The Art Institute of Chicago. 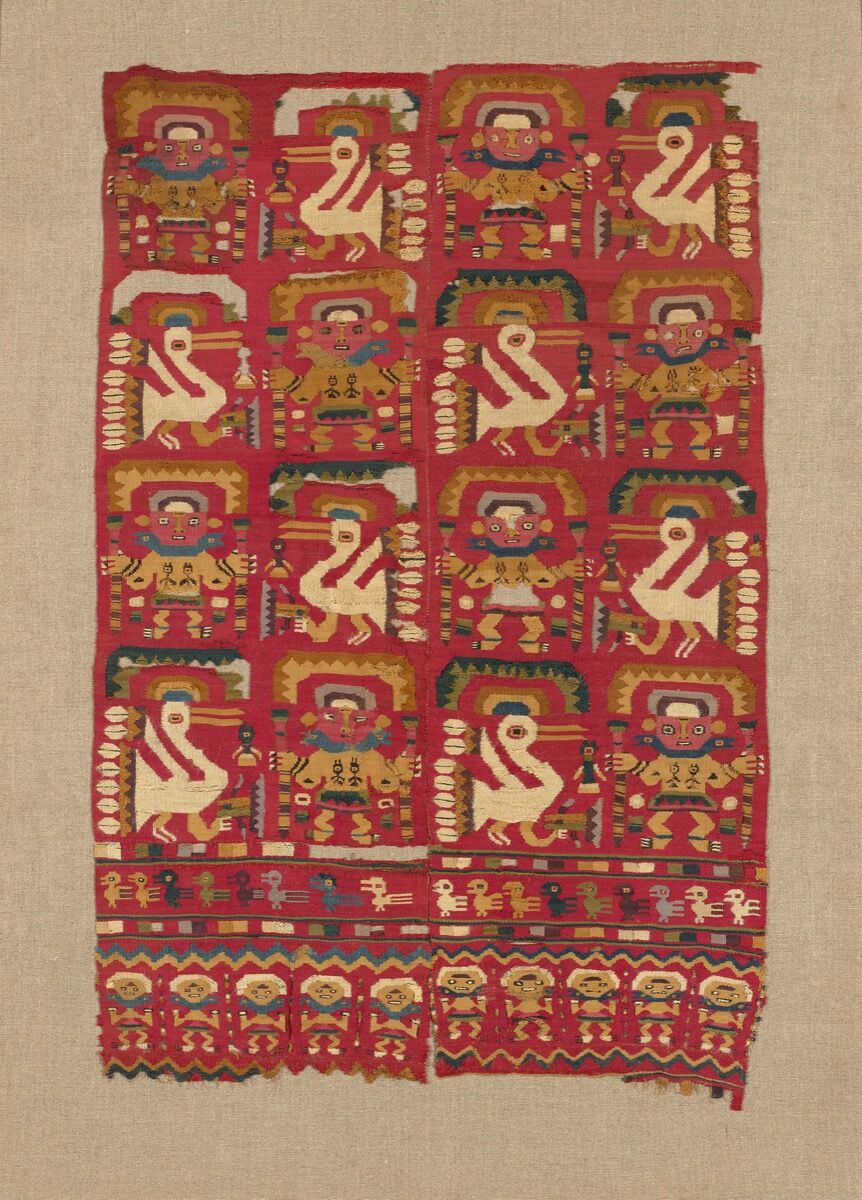 Many facets of Andean cultures, including the means of textile production, were overtaken by Spanish colonizers in the 16th century. Yet the exhibition takes pains to recognize the small communities in the highland villages of Peru and Bolivia who have reclaimed this important aspect of their cultural identity. “The impact of colonial power is certainly devastating but it is not a totalizing force to eliminate the power and artistry of the indigenous Andean population,” noted the exhibition curator, Erica Warren.
Today, contemporary artisans keep traditions alive by weaving on backstrap looms with fibers culled from the llamas and alpacas that roam the region. In our fast-fashion era, textiles are rarely status symbols, but they can still suggest resistance. In Cuzco, there’s an effort by artists to recuperate lost weaving and dying techniques. Warren sees the “interest and integration of textiles into everyday life much as it would have been in the precolonial period.” She said, “A lot of work is being undertaken by dyers to try to reproduce the kinds of natural dyes that were used.”
Julia Fiore
Related Stories 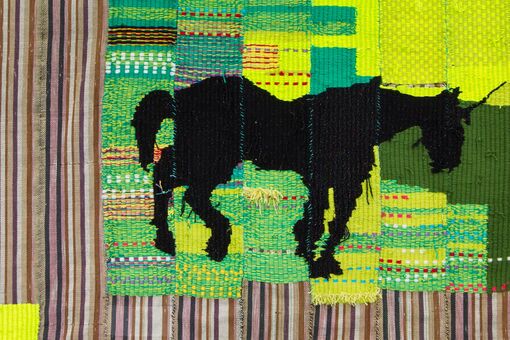 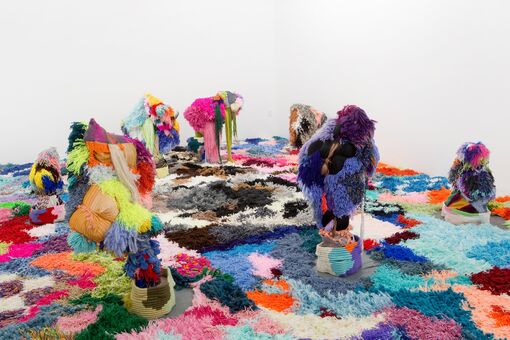 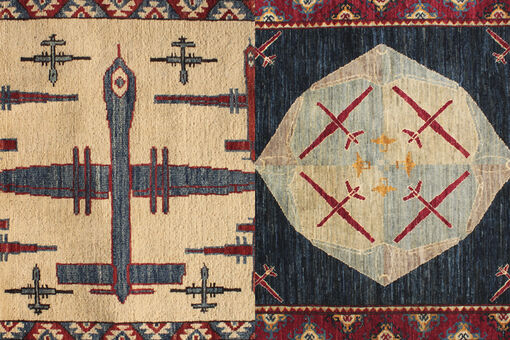 Lessons from the Afghan Women Who Weave Modern War into an Ancient Tradition
Vanessa Thill
Mar 12, 2019 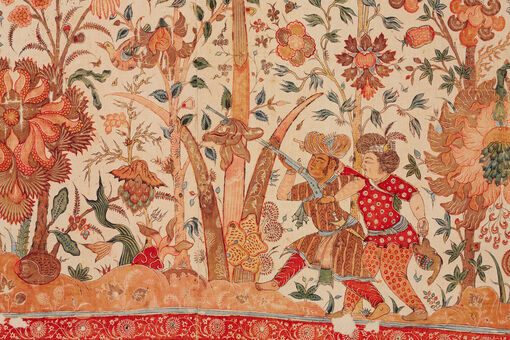