Why Andy Warhol Would Have Loved RuPaul’s Drag Race 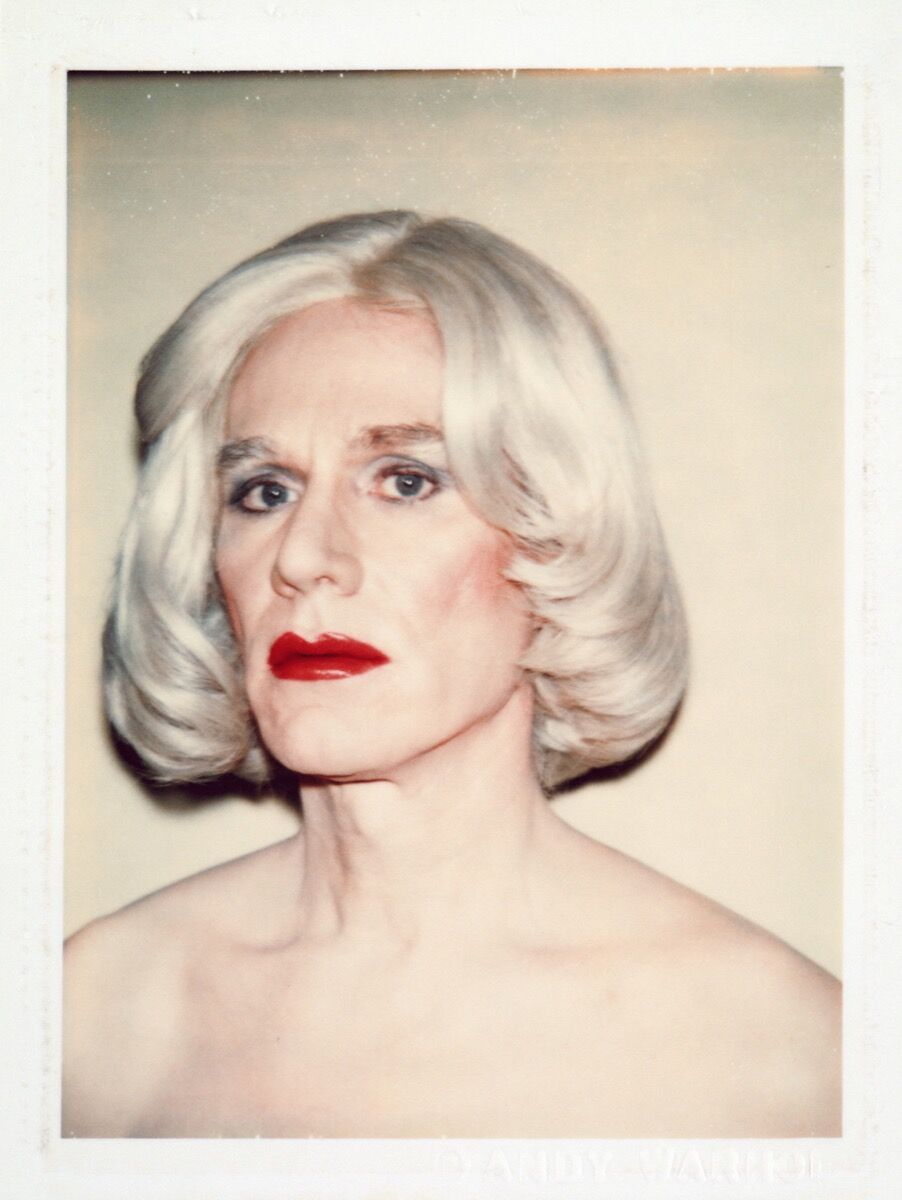 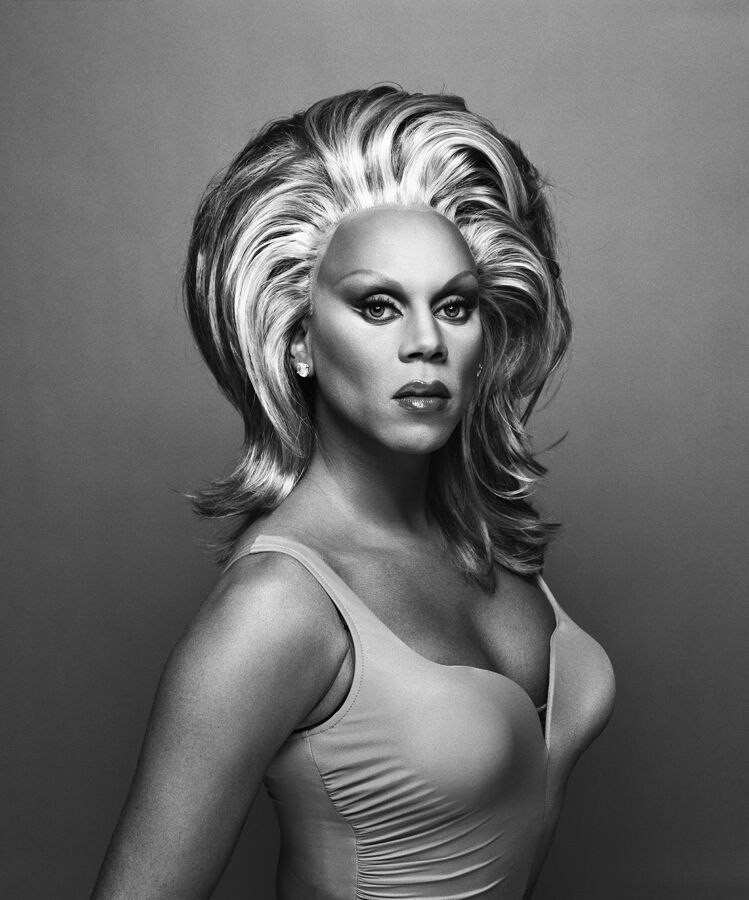 Patrick Demarchelier
Rupaul, 1998
Staley-Wise Gallery
Last night on RuPaul’s Drag Race: All Stars 3, RuPaul sported a white wig and carried a Polaroid camera, a shorthand nod to the Warhol era: Studio 54, Campbell’s soup cans, Brillo boxes, and 15 minutes of fame. “Now to give you a sense of how wild Studio 54 could be, Bianca Jagger was once photographed entering the club on a white horse,” Ru said. “God, I miss quaaludes!”
In the episode’s mini-challenge, contestants dressed up for photographs later turned into
Pop Art
portraits resembling
Andy Warhol’
s bright, blocky prints of divas such as Elizabeth Taylor and Marilyn Monroe. Spoiler alert: A queen named Aja won the competition with a bouncy blue hairstyle and strapless dress, her photos most reminiscent of the simultaneous simplicity and glamour in the original prints. (“Bitch, I earned it,” she confirmed.) In tribute, she received cash and a year’s worth of hamburgers. Will she eat them with as much aplomb as the artist famously did? I certainly hope so. 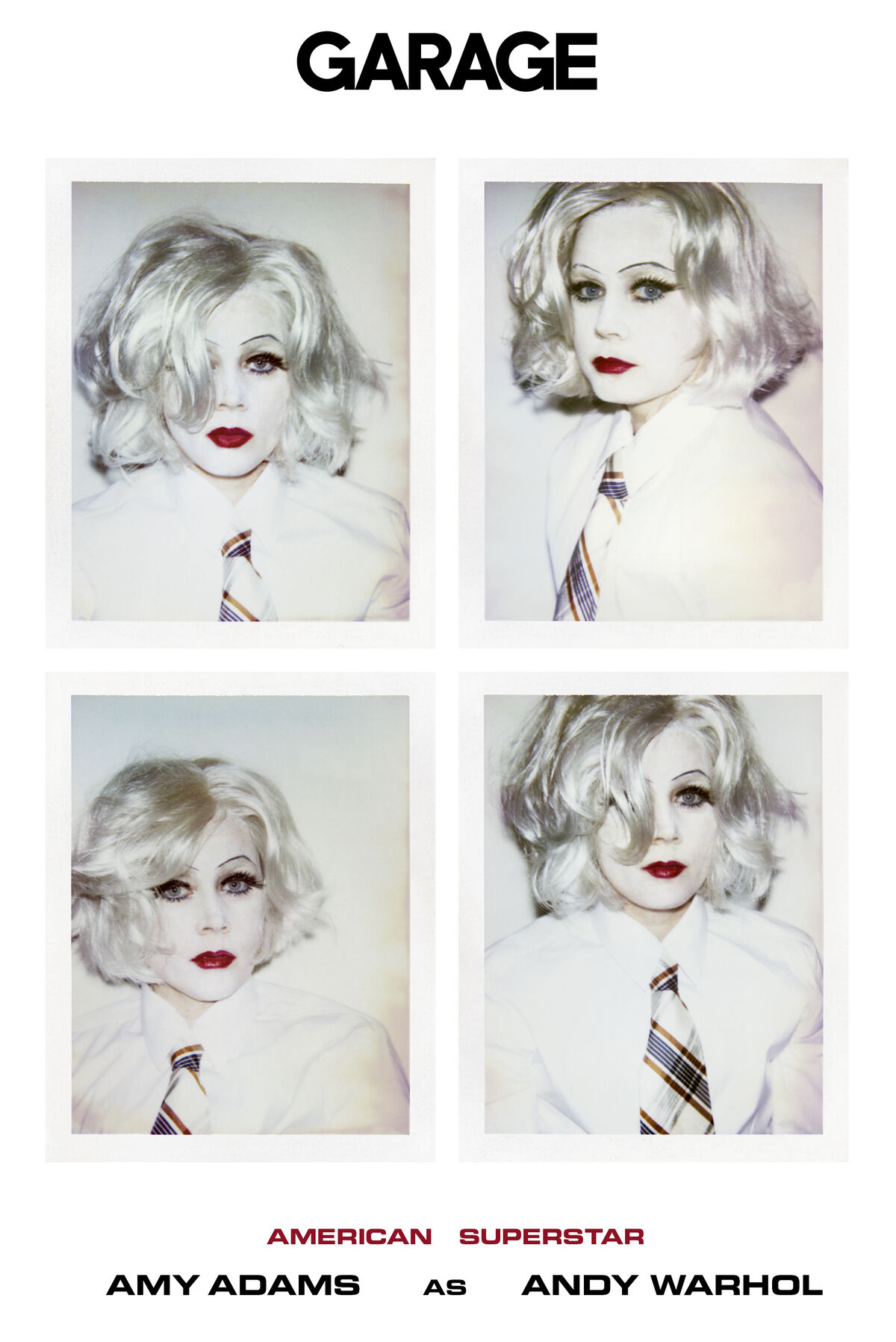 Cover of GARAGE Magazine No. 14 (S/S18) starring Amy Adams as Andy Warhol in his famous Self-Portrait in Drag. Photography by Inez & Vinoodh. 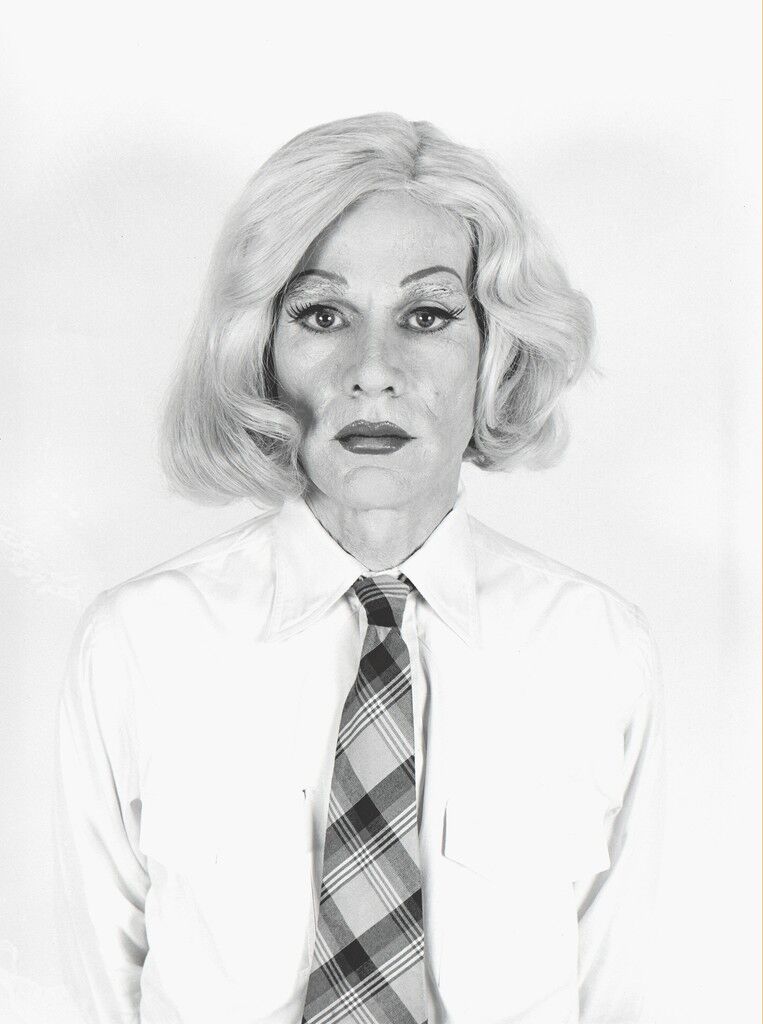 Christopher Makos
Altered Image , 1981
Izolyatsia
Indeed, RuPaul and Warhol are a match made in drag heaven. Warhol’s portraits in drag remain a touchstone for artists and creative directors, 31 years after his death. Garage Magazine’s most recent cover riffs on the original snapshots, featuring Amy Adams dressed up like the artist dressed up like Marilyn Monroe. Wearing red lipstick, a white wig, and a striped tie, she takes Warhol’s gender-bending a step further: She’s a woman, dressed up as a man, dressed up as a woman. The self-portraits of
Cindy Sherman
, who once sat on the board of The Andy Warhol Foundation, are a natural outgrowth of Warhol’s playful manipulations of his artistic persona. British artist
Grayson Perry
, who often dresses in bright, pop-infused drag, is a further link between RuPaul and Warhol.
Warhol shot the drag portraits in the early 1980s, when he was already widely known. (New York’s Hugo Galerie gave him his first solo exhibition in 1952, and the Museum of Modern Art included him in a 1955 group show.) The series “Altered Images,” then, is also a riff on one of the artist’s favorite themes: celebrity. “Lady Warhol” was a masquerading star whose powdered face and big hair didn’t conceal the artist’s identity, but gave it another dimension.
To create the portraits, Warhol partnered with his assistant,
Christopher Makos
. The pair met at one of the artist’s dinner parties in 1976. Though Makos shot the series, Warhol attributed the pictures to himself: they involved his camera and film, and were made in his Factory. (Exact authorship, as a result, can get confusing—as you might notice here—with some sources attributing certain images to Makos rather than Warhol.) 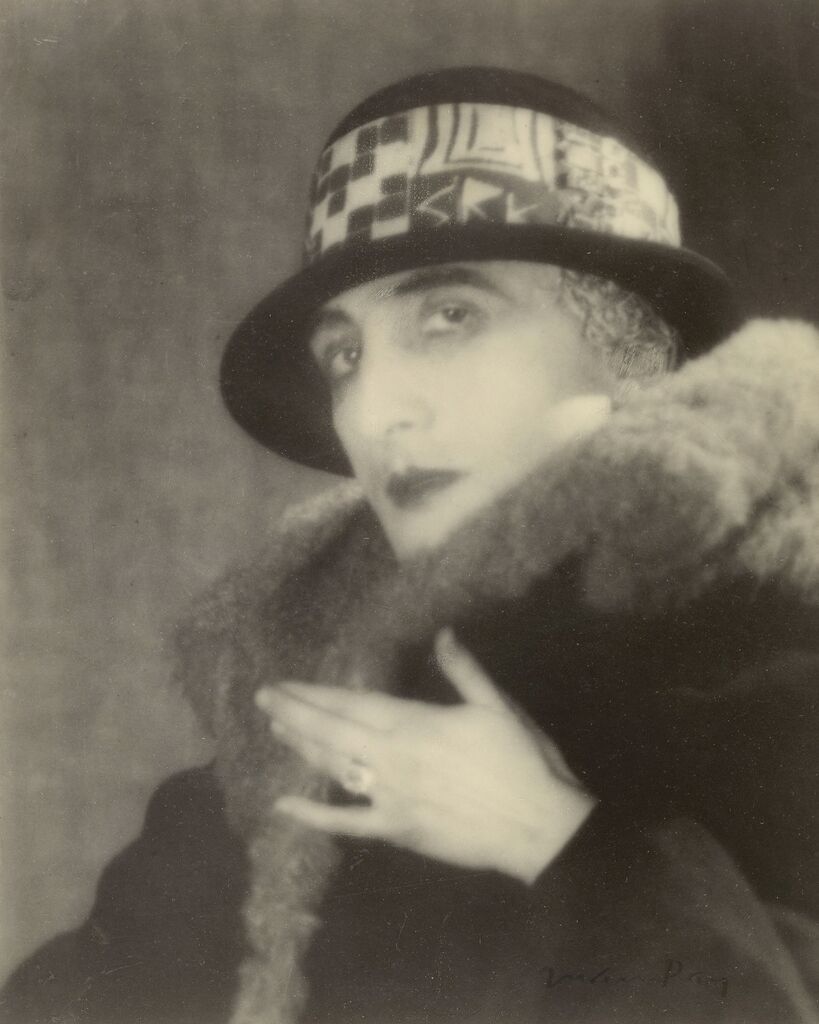 Man Ray
[Rrose Sélavy (Marcel Duchamp)], 1923
J. Paul Getty Museum
Advertisement
In an interview, Makos once revealed, “We weren’t trying to do drag photos. It was just about altering Andy’s face.” The major women’s clothing brand Halston had offered to loan them a dress, but Warhol declined—the tie and jeans made the images more slippery, less situated in a particular gender narrative.
Warhol was hardly the first artist to dress in drag. Provocateur
Marcel Duchamp
created an alter-ego for himself, Rrose Sélavy, whom photographer
Man Ray
captured in black-and-white portraits. Throughout his career, Duchamp attributed some of his artwork to the fictional persona. Warhol, indeed, owes much to the French artist, who also elevated commercial objects to the status of readymade artworks. His preoccupations with soup cans and Brillo boxes are an outgrowth of Duchamp’s concerns with the often-overlooked relics of daily life.
After last night’s mini-challenge, the queens created personas to go with the theme, which Ru called “Soup Can Realness.” Wearing heavily-decorated, cylindrical “soup cans,” they strutted for the judges. Voice-overs inspired by The Andy Warhol Diaries accompanied their performances. Aja, in a blue wig, strutted out in a structure that read “Sugar Tits.” 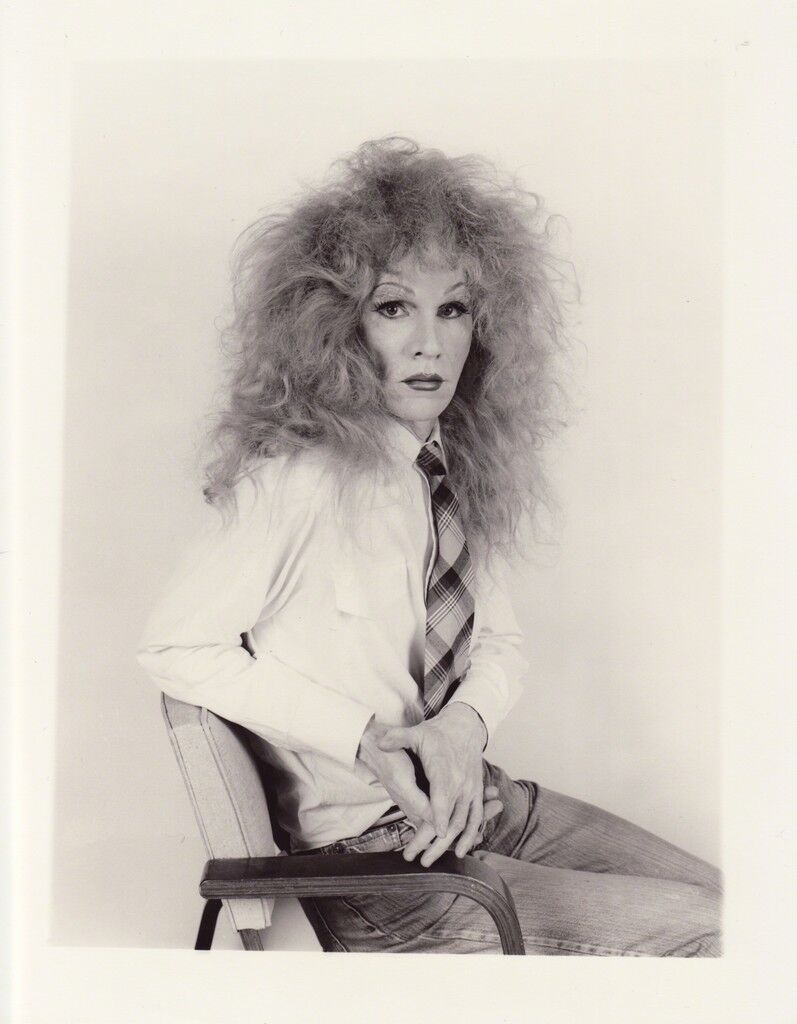 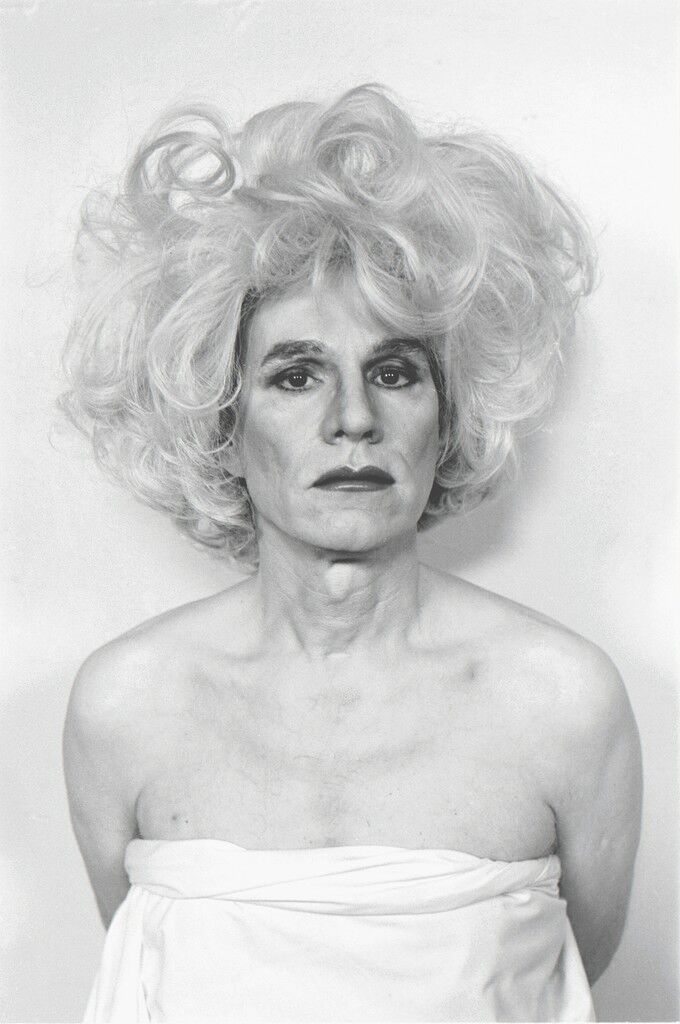 Christopher Makos
Altered Image , 1981
Izolyatsia
“Type two dia-booties,” one judge commented. More puns prevailed. “Looks like children of the corn chowder,” Ru offered after the queen Trixie Mattel strutted out in a can labeled “Pep/Abysmal.”
The competition cattily subverted Warhol’s original intent with his “Campbell’s Soup Cans” series, first exhibited in 1962. The artist transformed mundane American products and advertising into valuable paintings, infusing galleries with the everyday. Alternately, the Drag Race queens reimagined the cans as vehicles for self-expression: simple objects that once signified mass consumption became exquisite, deeply personal costumes.
One wonders what Warhol might think about all of this. More precious artists might shiver at the thought of reality television co-opting their oeuvre. Yet the show extends Warhol’s celebrity and influence in a way he’d probably applaud. Last night, he received nearly three times the typically allotted 15 minutes of fame. Warhol created a brand, persona, and ethos that continues to reach new audiences in vivid and unexpected new ways. His outsize, ever-expanding legacy is perhaps the artist’s greatest coup.
Alina Cohen
Related Stories