When Is It Okay to Use Animals in Art? 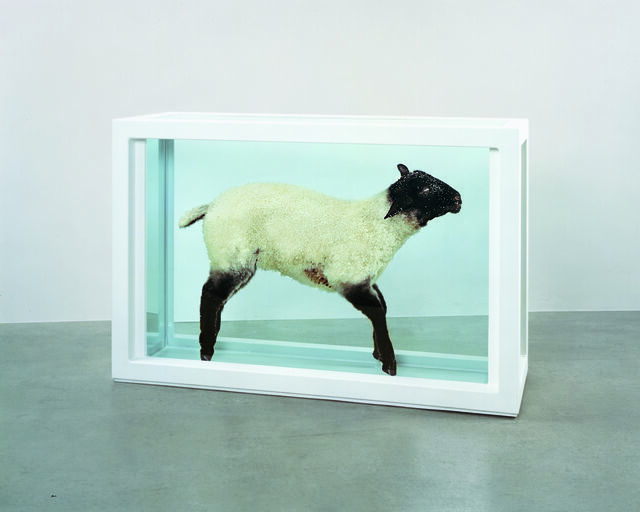 Damien Hirst
Away from the Flock, 1994
The Broad Art Foundation, Santa Monica 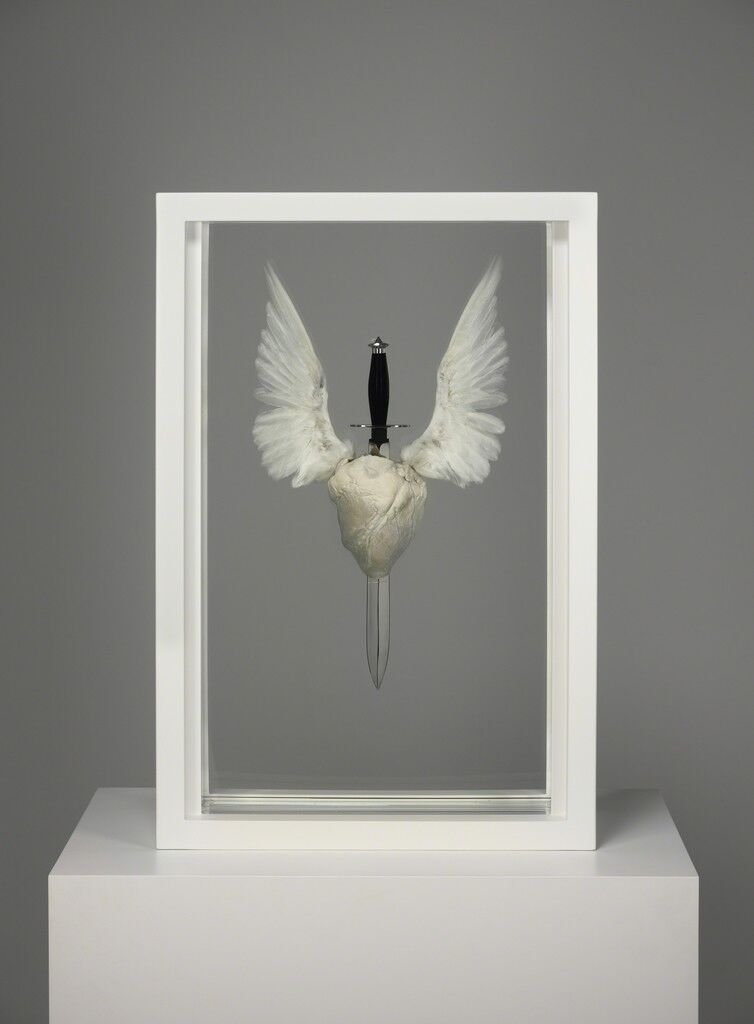 Damien Hirst
Sacred Heart (with Hope), 2007
White Cube
In recent decades, the physical use of
living and dead animals
by artists has become increasingly common in artworks that range from performance spectacle to serious installation.
Take, for example, two years ago, when the late
Arte Povera
pioneer
Jannis Kounellis
brought a dozen live horses to Gavin Brown’s enterprise in the West Village to restage his seminal work Untitled (12 Horses) (1969). Or in 2006, when
Banksy
not-so-subtly used a live, painted elephant as a metaphor for, well, the elephant in the room.
And who could forget
Damien Hirst
? Throughout his career, the British artist has attracted the ire of animal rights advocates for his recurring use of sharks, livestock, butterflies, and other once-living things in works that sell for millions. In extreme cases, artists have even gone so far as to kill animals before an audience.
So where is the line drawn? What are the ethics of using animals in art?

Whenever an exhibition involving animals pops up, protests of some sort or another are nearly always in tow. While Kounellis was in New York viewing his own exhibition, animal rights advocates picketed inside the show, despite the fact that the gallery insisted the animals were tended to and treated well.
The sound and the fury of such protests is not always effective, with exhibitions often continuing despite ethical concerns. Depending on your viewpoint, this could be because the artwork is ultimately humane. Or it could be because our laws are “woefully inadequate to protect animals from exploitation or abuse,” which is what Joan Schaffner, an animal law professor at George Washington University, told Artsy recently via email.
The exact regulations governing the exhibition of animals vary from country to country, and from state to state within the United States. Across the nation, federal law provides a person with minimum provisions for the research, exhibition, and transport of animals under a 1966 statute known as the Animal Welfare Act (the primarily application of the law is around research). Only certain animals are protected, and institutions that meet the specifications under the law are required to get a permit from the United States Department of Agriculture. 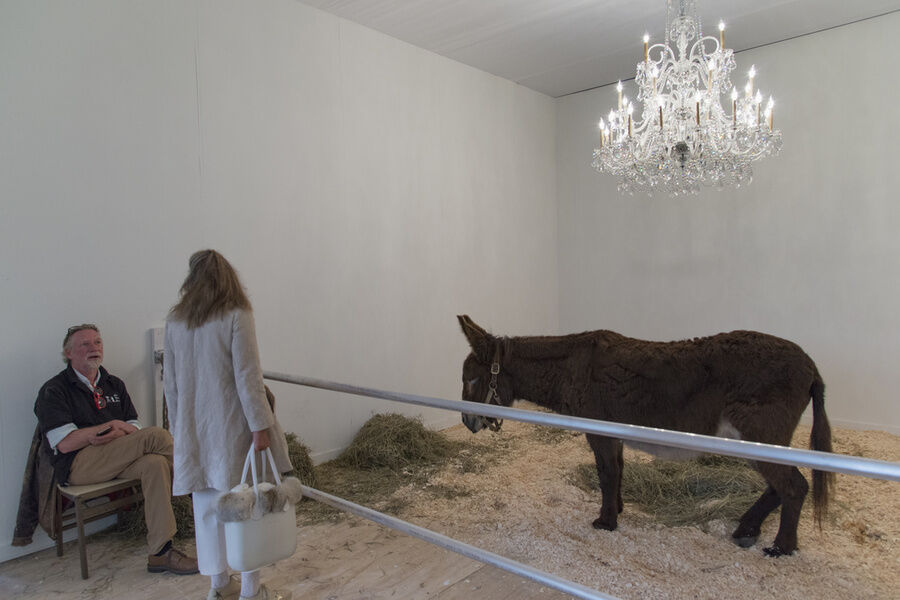 Installation view of Maurizio Cattelan’s Enter at Your Own Risk—Do Not Touch, Do Not Feed, No Smoking, No Photographs, No Dogs, Thank you, 1994, at Frieze New York, 2016. Photo by Adam Reich for Artsy.

There are other laws that apply to animals in art. In New York, most forms of animal cruelty constitute a misdemeanor (rather than the more punitive felony), which is punishable by up to a year in prison. The law applies to anyone who “overdrives, overloads, tortures or cruelly beats or unjustifiably injures, maims, mutilates or kills any animal, or deprives any animal of necessary sustenance, food or drink.” Art that activists target over allegations of cruelty can, but certainly does not necessarily, fall under this legal criteria.
In 1994, wily conceptual artist
Maurizio Cattelan
exhibited a donkey in a SoHo gallery. Neighbors complained, and an unamused city government shut down the show (the gallery closed shortly after)—not due to cruelty to animals, but because the donkey and its defecation posed a health hazard. (Apparently this wasn’t an issue at Frieze New York in 2016, when a revival of the work was met with calls for protest, but was not shut down.)
In the case of Banksy’s elephant, while it was initially permitted to be a part of the exhibition by the Los Angeles Department of Animal Services, organizers were ordered to scrub the paint off after concerns were raised that it posed a health risk to the animal.
So, while it’s rare compared to the regularity of protests around such works, artists have fallen afoul of animal cruelty regulations. One of the most shocking cases came in 1976, when
Kim Jones
was required to pay a fine after dosing rats with lighter fluid and setting them aflame as part of a work meant to comment on the Vietnam war. 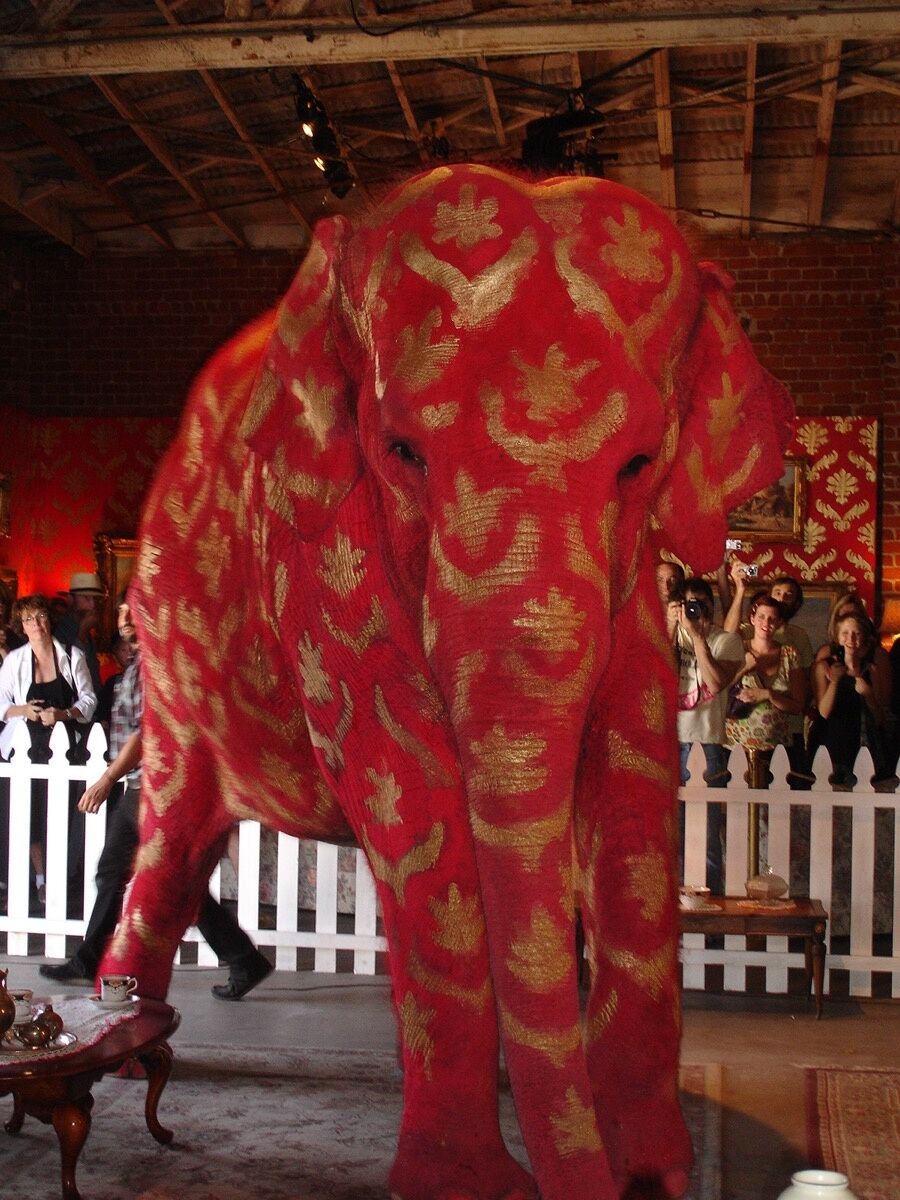 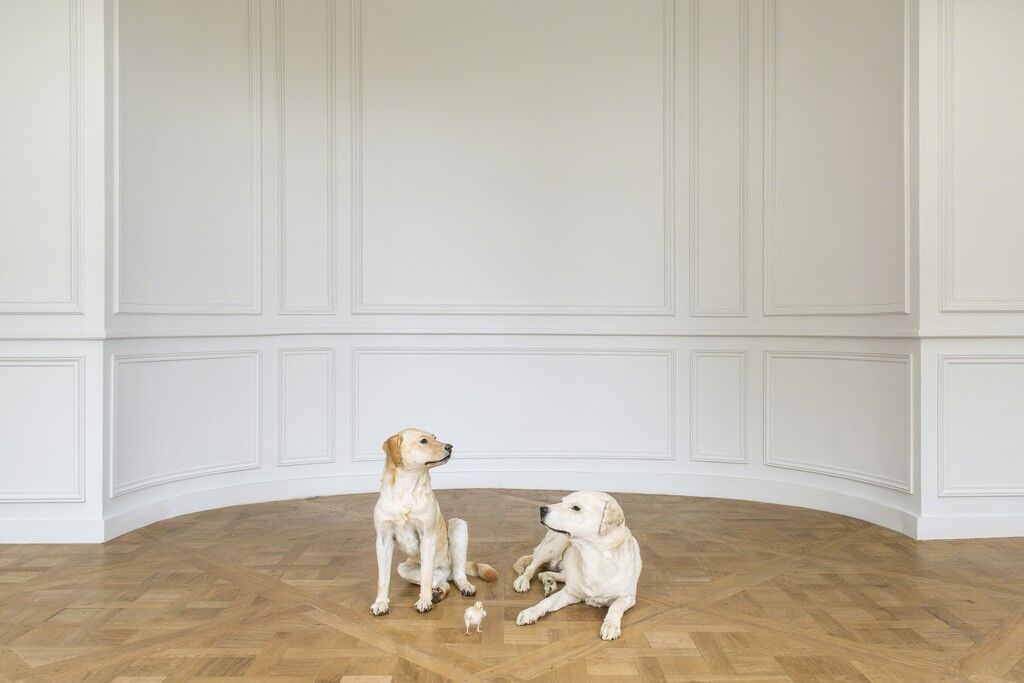 Maurizio Cattelan
Untitled, 2007
"Maurizio Cattelan, Not Afraid of Love" at Monnaie de Paris
Advertisement
In conversations around the topic, some worry that concerns over animal cruelty can stifle or censor free artistic expression. In the U.S., judges have weighed citizens’ and artists’ first amendment rights against laws protecting animals. In one infamous case, United States v. Stevens (2010), an appeals court struck down a law banning the the distribution and sale of depictions of cruelty to animals—which observers argued could be used to censor works of visual art—arguing that the statute was broad enough to violate free speech protections.

In 2010, the College Art Association convened a taskforce to craft guidelines for artists and institutions using animals in art and exhibitions. Along with asserting that “no work of art should, in the course of its creation, cause physical or psychological pain, suffering, or distress to an animal,” the CCA guidelines posed a series of questions to artists looking to use animals, including “Have you done research on the biology of your animal subject to understand aspects of its physiognomy and experience?”
The question is an important one to consider for both artists and viewers, given that “suffering can be difficult to perceive initially,” said University of Tasmania lecturer Yvette Watt, whose work focuses on animal studies and art. Taking an animal out of its natural environment or previous context, as well as changing the way it is cared for can cause harm. Just because an animal doesn’t appear distressed doesn’t necessarily mean that it is happy in an exhibition, Watt added.
In Tasmania, a performance by artist
Hermann Nitsch
planned for this June has drawn outrage for its use of 500 liters of bull blood. For the work, titled 150.Action (2017), Nitsch will stage the 150th iteration of a series that draws on pagan rituals, covering participants with blood. While some of the prior 149 actions involved the actual slaughter of a bull, this one will be “humanely” killed beforehand, according to an article in the Huffington Post. The Museum of Old and New Art, which is hosting the “Dark Mofo” festival that will include Nitsch’s work, has said that the performance will go ahead despite a 20,000 signature-strong petition calling for its halt.
Nitsch’s work has raised questions over artistic expressions, with politicians taking a step back to avoid “making judgment calls about art,” as Tasmanian Premier Will Hodgman told ABC News. In a statement, the festival’s creative director Leigh Carmichael stated, “for those members of the public who believe that this is no more than shock art, or a publicity stunt, we urge you to look deeper.” 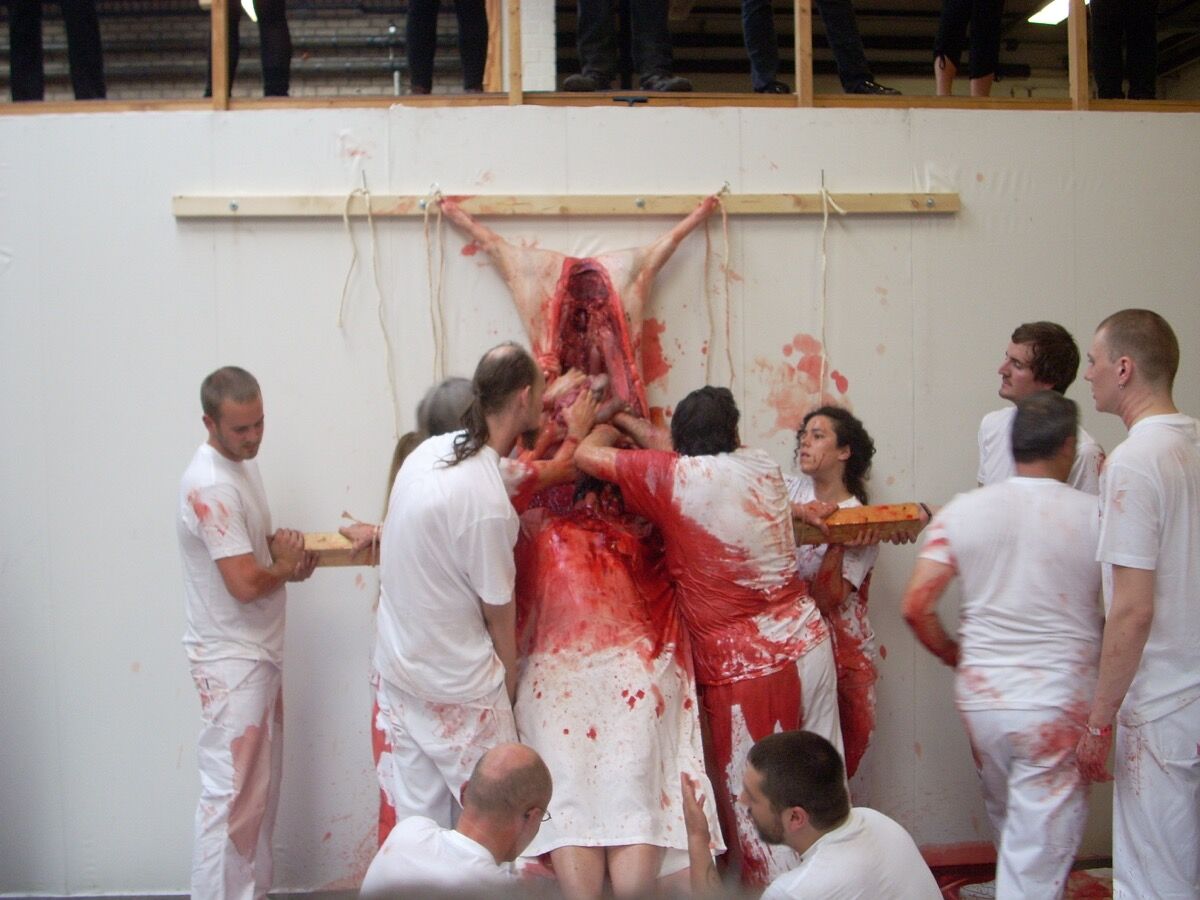 Hermann Nitsch performance in Tilburg in 2009. Photo by Tanja Baudoin, via Flickr.

The case has also surfaced that even meat-eaters can be taken aback by gory works of art. There is a clear difference in how people perceive the killing of animals for food (which is itself often brutal and exploitative), and the killing of animals for an artwork. “People have a right to question these things even if their ethics aren’t pure,” said Watt.
She speculated that when someone who would happily eat a McDonald’s Big Mac is outraged over the use of an animal in a work of art, their reaction stems from feelings of discomfort over “the idea that an animal’s body is rendered as mere artistic material,” Watt noted. “They don’t see that artists should have any special license to do something that they would be uncomfortable about if someone else did it.” Works that appear to celebrate an animal’s death are particularly problematic.
Outside of physical treatment, the representation of animals is part of the equation regarding if animals are being used ethically, Watt argued. A work of art that reduces animals to a material—as inanimate as paint or clay—can be seen as unethical, especially if it is commenting on human issues unrelated to the animal.

This isn’t to say that animals can never be used in art. La Trobe University professor Peta Tait, who has written on the use of animals in performance, argued that “it is possible to work with animals that we co-habit with,” citing dogs as a prime example.
She added that using animals in art is more acceptable when the artist has a “close relationship with another species that is part of [their] life.” Performance artist and animal rights activist Rachel Rosenthal, for instance, was famously close to Tatti Wattles, her pet rat, which made several appearances in her art. Tait also suggests that artists “go to the space that the animal inhabits and to make the artwork there.” Sometimes, it’s even possible to win PETA over. The animal rights organization initially disapproved of artist Kathy High’s 2005 installation at MASS MoCA, where she housed three transgenic rats used in medical experiments. The museum conducted daily conversations around the treatment of the animals, cleaned their habitat routinely, and had a vet checking in on them regularly. Eventually, High said, PETA came to approve of the work, given that the animals were enjoying much better treatment than what they would encounter in a lab. At the conclusion of the exhibition, two staffers adopted two of the rats (which is not an uncommon occurrence in cases where animals are hosted in an institution).
While High’s work began as a critique of the way animals are treated in labs by big pharma companies, it became something of a challenge to museums and the art world. High later expressed doubt as to whether she should have staged the work in an institutional setting at all, given the way that works of art can be commercialized or objectified. “The irony is that there are still huge problems with exhibiting animals in a gallery or museum space…the animals become commodities again—art objects as opposed to laboratory products,” High writes. “Perhaps this is an inherent critique of the gallery system too.”
Isaac Kaplan is an Associate Editor at Artsy.
Related Stories