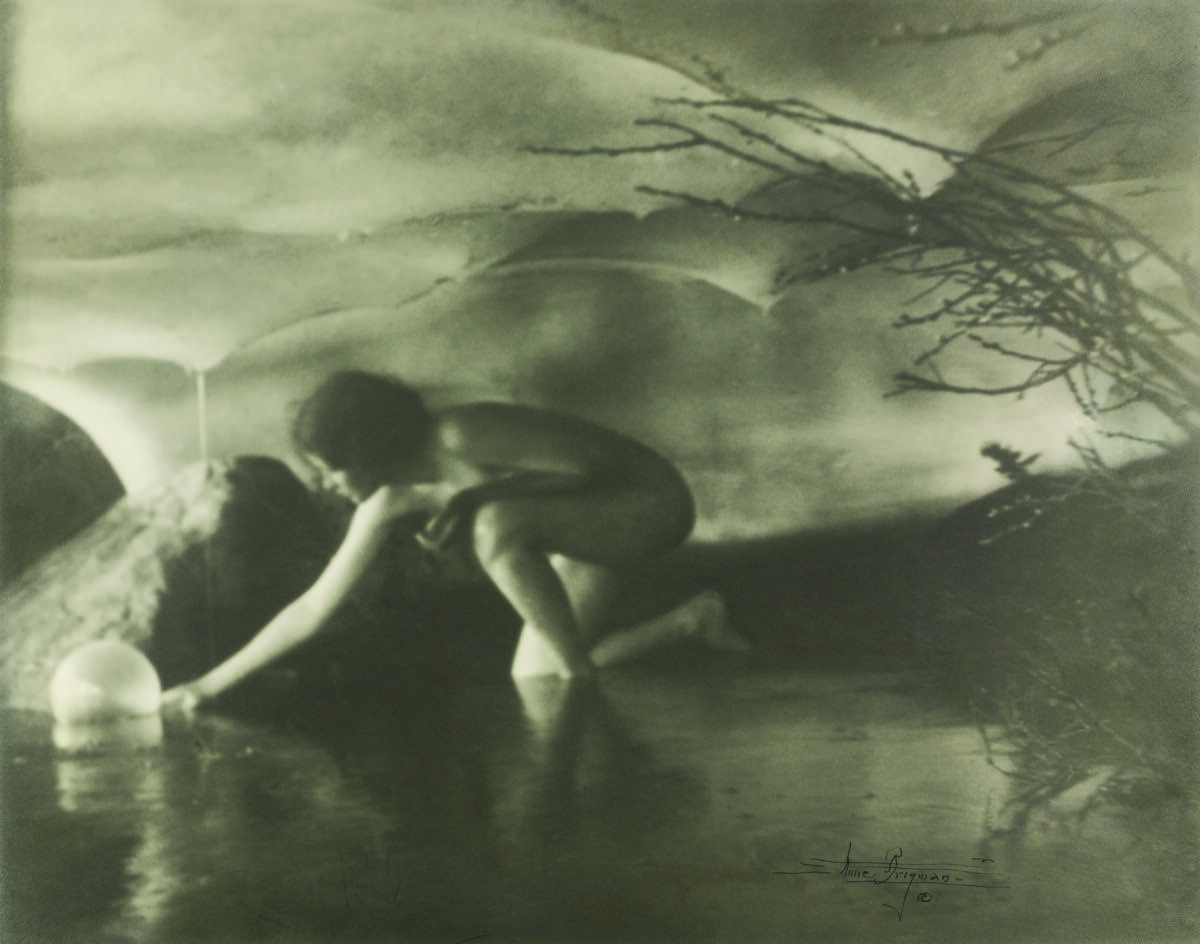 Anne Brigman, The Bubble, 1906. Courtesy of the Wilson Centre for Photography.

In a photo by
Anne Brigman
, taken sometime in the early 20th century, she stands nude against a background of shadow-flecked rock, her face obscured by the cloth hood of the large-format camera she used to capture the scene. The image is arresting not because of her nudity—a habitual trope in Western art—but because it shows the woman as the author of the scene. She is not a passive object, akin to the tumble of apples in a studio still life, but a searcher in the wilderness.
Some art historians believe that Brigman was the first woman in America to photograph herself nude. Her trailblazing, yet long-neglected work is now the subject of an expansive retrospective at the Nevada Museum of Art. “For Brigman to objectify her own nude body as the subject of her photographs in the early 1900s was radical,” writes curator Ann M. Wolfe. “To do so outdoors in a place perceived as an unoccupied and near-desolate wilderness was revolutionary.” 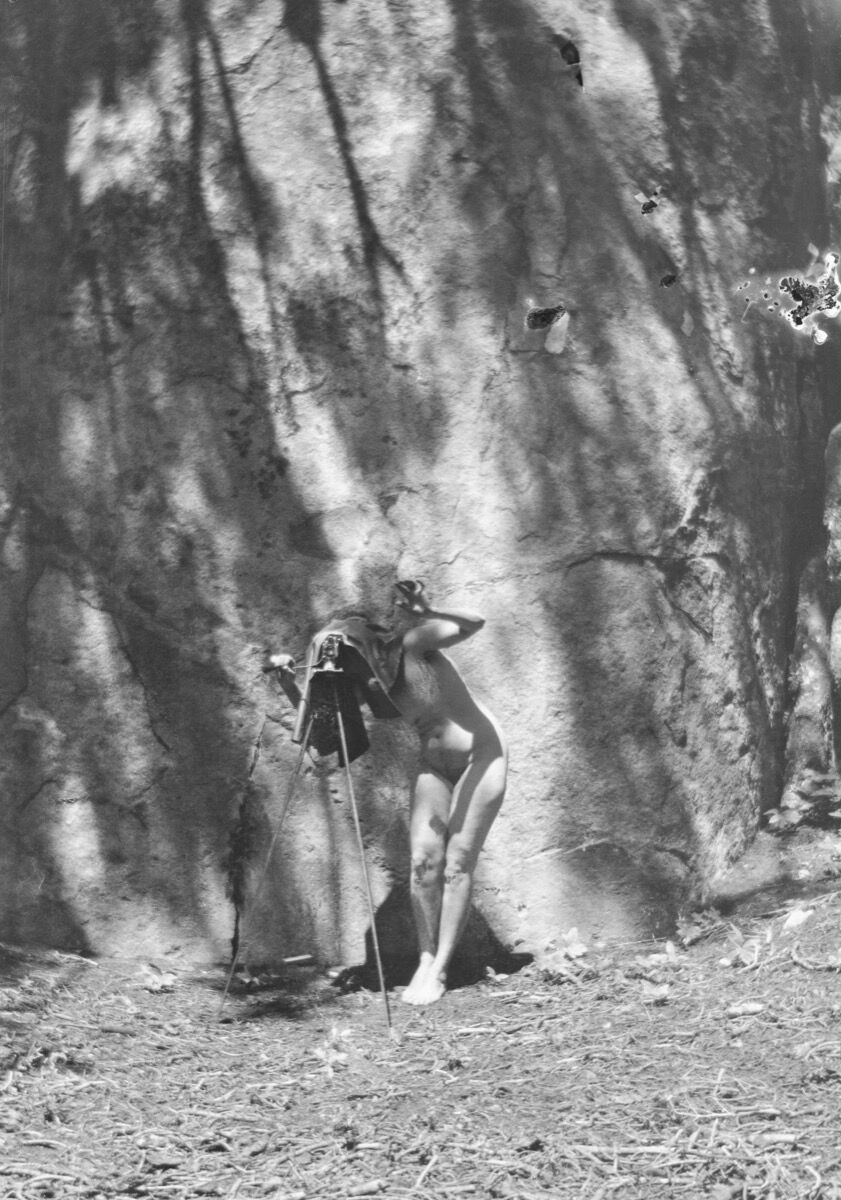 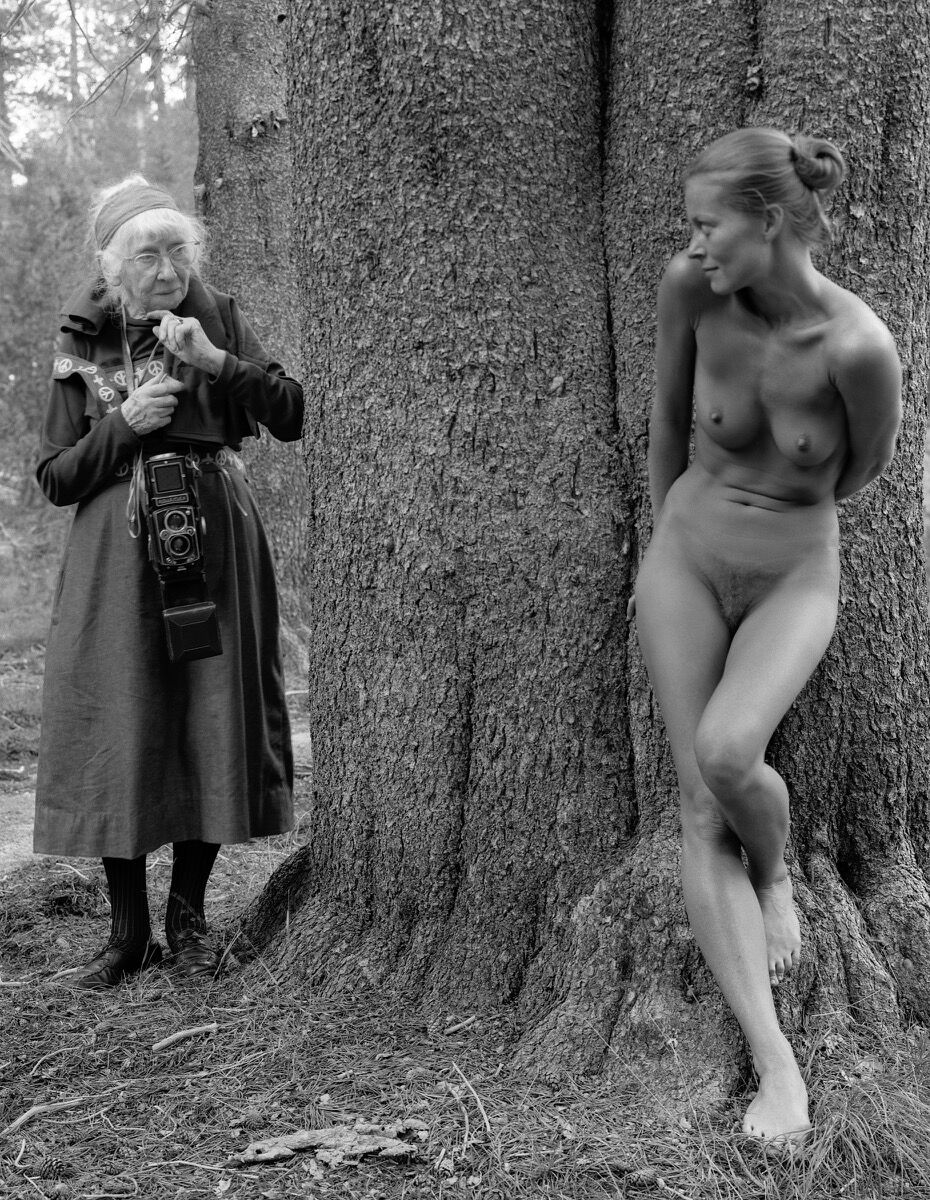 Pairing the retrospective with the exhibition “Laid Bare in the Landscape,” the museum provides a vital link between Brigman and the feminist art of the 1970s and after—works by women such as
Ana Mendieta
,
Cindy Sherman
,
Mary Beth Edelson
,
Judy Chicago
,
Barbara Kruger
, and
Hannah Wilke
that reclaimed the representation of the female body from patriarchal art history. These works often amount to a reversal of gazes: If art history traditionally centered on the female-as-model, an object for male consumption, these women artists challenged that convention in their depictions of their own naked forms. By staging her photographs against such dramatic scenery, Brigman, according to Wolfe, was practicing an early form of performance art. 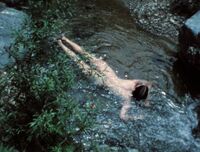 5 Images
View Slideshow
Advertisement
In Brigman’s ethereal photographs, rendered in soft and gauzy film, women are not pictured in the home, but in the unconfined spaces of the American West—the rocky cliffs and winsome headlands of the Sierra Nevadas, amid the juniper and pine. In a visual entwining of body and landscape, the female nude is often posed among knotted twisting trees, the limbs and branches so deeply entangled they first appear as one. The photographs for Brigman were a sublime expression of unity with the earth, a recognition of the sacred in the natural world, and they would become an important emblem of West Coast modernism.
Brigman’s love of nature was rooted in her childhood spent in Hawaii. She was the daughter of a wealthy missionary family—a “child of the tropics,” as she described herself. At 16 years old, Brigman moved with her family to Los Gatos in northern California. Nine years later, in 1894, she married Martin Brigman, a sea captain. They sailed the Pacific together before eventually settling in the bohemian scene of the Bay Area, where she began taking photographs of her sisters and friends in the high altitudes of the nearby mountains, regions chiefly mountaineered by men. “They were real, modern women, like her, acting on their own will, not professional studio models who presented only conventionalized bodies,” scholar Kathleen Pyne writes in “A Tale of Two Coasts: Anne Brigman’s ‘Wonderful Terrible.’” 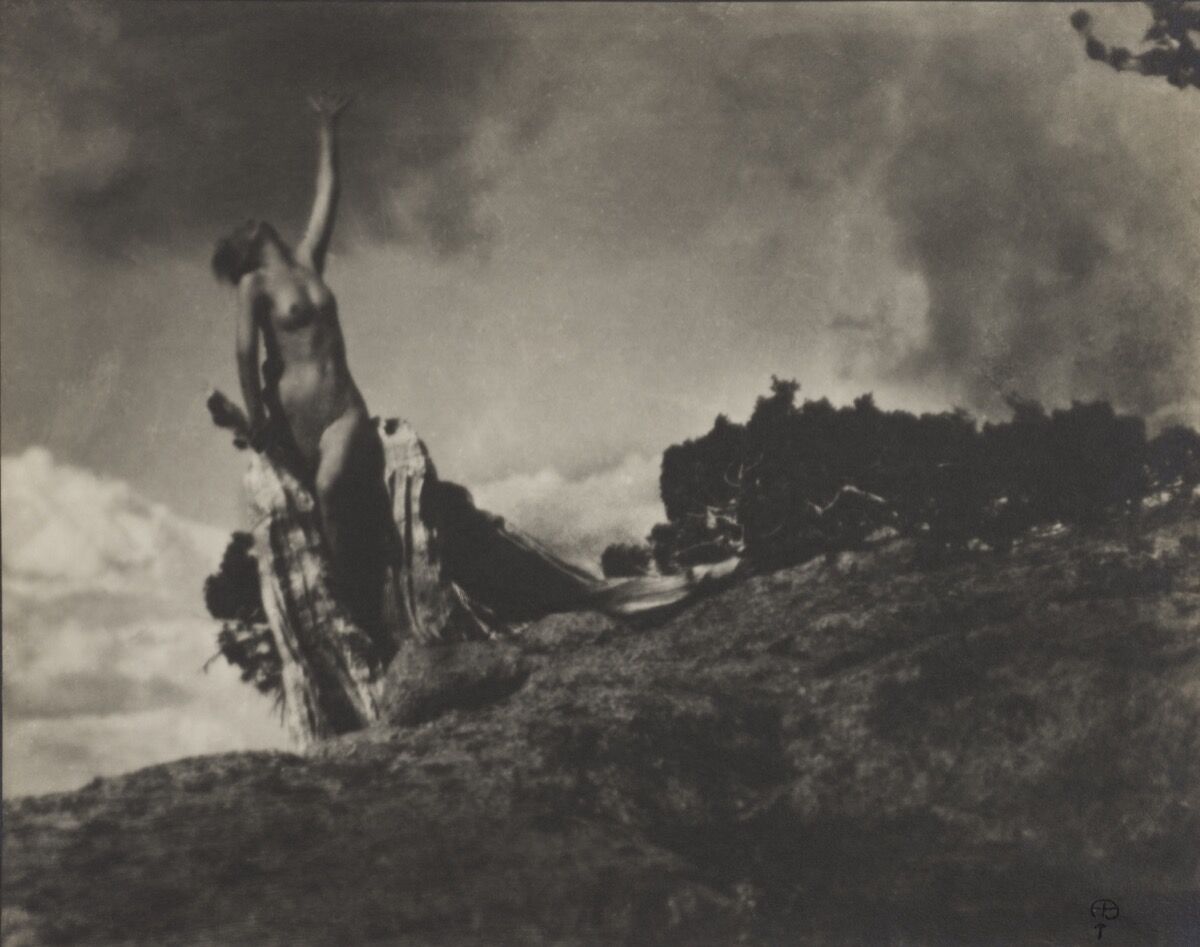 Anne Brigman, Soul of the Blasted Pine, 1906. Courtesy of the Wilson Centre for Photography.

Brigman sent her photographs to New York impresario
Alfred Stieglitz
, which so impressed him that he asked her to join the distinguished Photo-Secessionists around the turn of 20th century. She was one of few women, and one of only two West Coast artists, to join the group that was redefining the meaning of 20th-century photography. The medium, under Stieglitz’s grand vision, was being rescued from its perception as strictly utilitarian and championed as an art form. For him, Brigman’s lush dreamy photographs shed any vestiges of frilly Victorian sentimentality to offer a revitalized image of the new “modern woman.” “I consider you one of the very few photographers who have done any individual work,” Stieglitz wrote in a letter to her.
Stieglitz also found an eroticism in Brigman’s images that appealed to him. Captivated by the new studies of sexuality by thinkers such as Havelock Ellis and Sigmund Freud, Stieglitz believed carnal lust to be the origin of creativity. But Brigman, far from viewing her nudes as embodiments of hidden sexual desire, saw them instead as manifestations of the spiritual. (In fact, she admonished Stieglitz for ogling nudes when she visited his famed 291 gallery in New York.) As pictures of empowerment, they idealized the beautiful struggle she saw as central to the human experience. In Soul of the Blasted Pine, taken in 1906, Brigman renders the nude woman rising from the tree stump with the same epic attitude as Eugène Delacroix’s
Romantic
masterpiece Liberty Leading the People (1830). 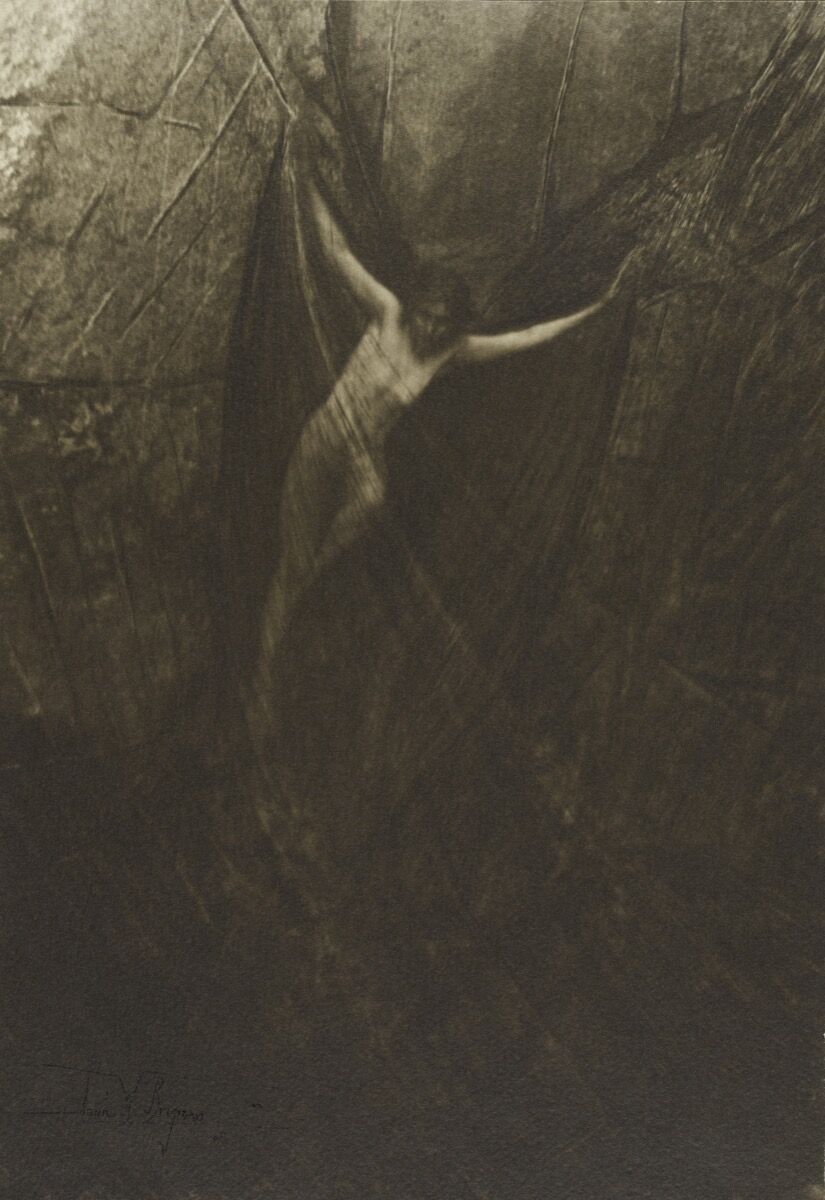 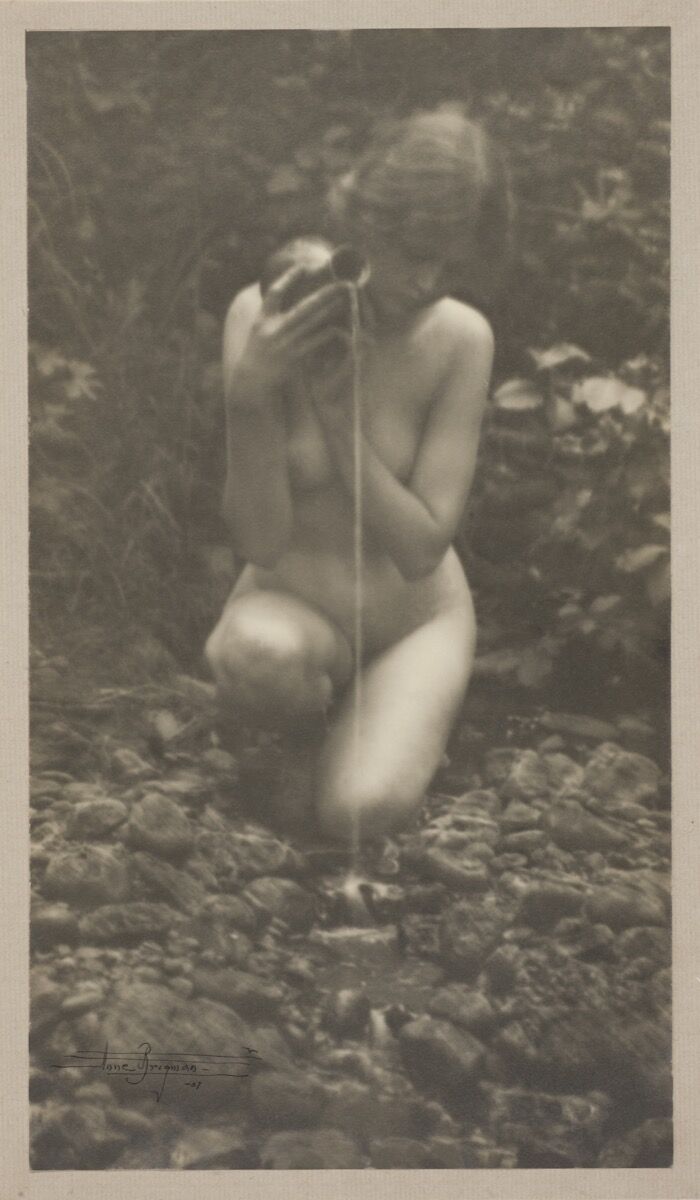 In 1910, Brigman separated from her husband as the movement for women’s suffrage was gaining strength (California women earned the right to vote in 1911). “Three years ago we separated. He had his way of thinking and I had mine and we developed along different lines. So now I am here, working out my destiny,” Brigman told a San Francisco newspaper. “My pictures tell of my freedom of soul, of my emancipation from fear,” she wrote. Rejecting her prescribed role as wife and mother, Brigman called her photographs her “picture children.” The camera was her tool of personal liberation.
Brigman’s photographs prefigured much of the feminist art that would come decades later—in their fearless depictions of the body, expressed as rebellious freedom rather than submission—even if those artists were unaware of her work. Though Stieglitz heralded her as a preeminent modernist photographer, Brigman’s painterly photographs soon fell out of favor. For decades after her death in 1950, the art world neglected Brigman—and yet her work is finally now seeing the recognition it deserves. What the beauty and the overt romanticism of the images conceals is their true subversive spirit.
“I wanted to go and be free,” Brigman wrote of the Sierras. “I wanted the rough granite flanks of the mountains and the sweet earth.…I wanted to forget everything except that I was going back to heaven, back to heaven in my high boots, and trousers, and mackinaw coat. That was all I wanted.”
Anya Ventura
Related Stories