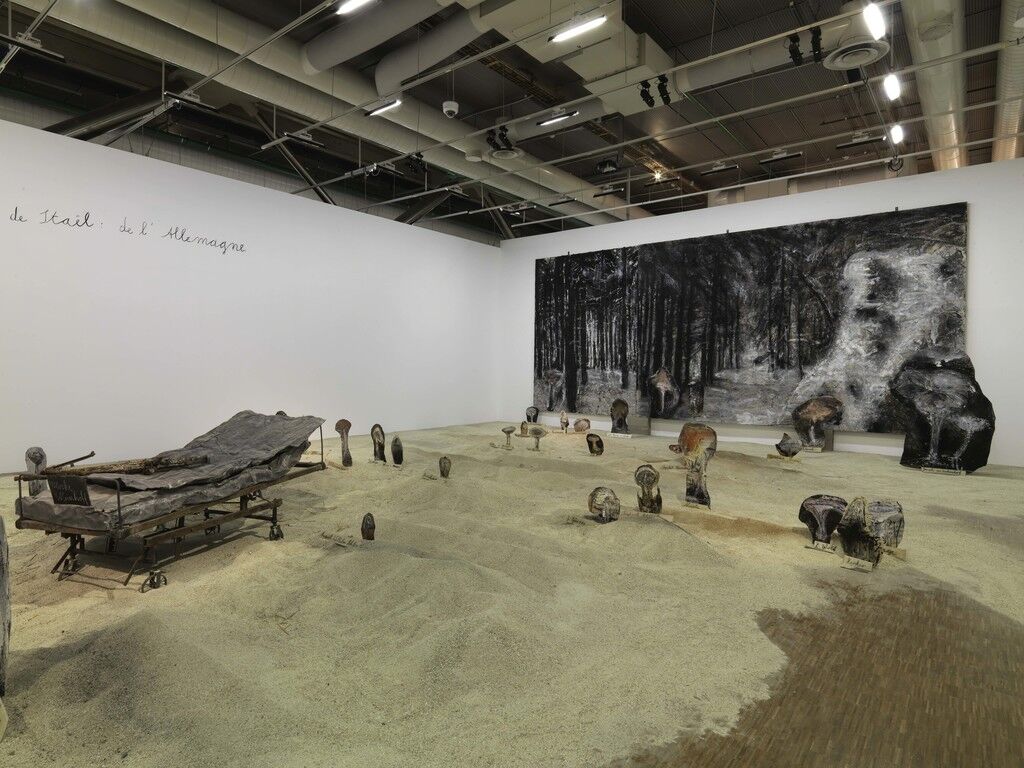 The work of
Anselm Kiefer
is instantly recognizable: massive, thickly impastoed scenes of pastoral destruction, embedded with chunks of lead or bundles of straw; charred, cracked surfaces that evoke some lunar terrain. His is an art of uncompromising materiality and profound allegory, at once physical and symbolic, rife with references to the dark and the mystical. He has always faced, head on, the complexities of our shared human past—Nazism, Norse mythology, Kabbalah—and he acknowledges equally our penchant for violence and our power to transcend it.
Born in 1945 near Germany’s Black Forest, Kiefer has been based in France since 1992. A popular 2010 documentary brought one of his studios, La Ribaute—a sprawling, tunnel-ridden laboratory he built in and around an abandoned silk factory in the French town of Barjac—to audiences around the world, introducing his practice as a sort of gesamtkunstwerk (a total work of art). Yet chances to explore his work in detail have been somewhat rare.
“Anselm Kiefer,” on view at Paris’s Centre Pompidou through April 18th, is his first retrospective in France in over 30 years. It’s a poetic installation of nearly 150 works that encompasses every facet of his production, tracking his journey through various literary and philosophical worlds. Arranged both chronologically and thematically throughout 13 galleries, the presentation features 60 major paintings, an ensemble of vitrines and works on paper, a handful of artist books, and a site-specific installation commissioned for the show. Curated by Jean-Michel Bouhours, it marks clear developments in the artist’s interests and techniques, which appear as distinct yet interrelated as chapters in a novel.
The story opens in the 1960s, following Kiefer’s studies of law and language at the University of Freiburg-im-Breisgau and a travel/study scholarship that brought him to France, where he pursued the trail formerly taken by
van Gogh
, from Paris to Arles. But Kiefer’s journey really started at home—with a visceral reaction to the Nazism of his parents’ generation. On view in the exhibition’s first gallery, a provocative series of painted self-portraits, “Heroic Symbols,” pictures the artist dressed in the uniform his father wore in the Wehrmacht, performing the Hitler salute against a variety of landscapes, from the forest to a seaside. Although the works were initially thought to glorify the Nazis, they are in fact a form of derision—seeking to awaken and reactivate Germany’s historical memory and to encourage the country to take responsibility for the atrocities perpetrated in its name.
Although an iconography of destruction recurs in Kiefer’s work—his countrysides are sterile, ravaged by war and fire—it also demonstrates a commitment to transcendence. A vibrant series of watercolor paintings begun in the 1970s and reprized in 2010, “extases féminines,” juxtaposes nude female bodies, their faces contorted by passion, with symbols of femininity and birth—flowers, oysters, fire. These paintings offer a life-affirming counterpoint to the darkness of his other works.
This is echoed in the motif of a painter’s palette, which floats across the surfaces of a series of paintings he created in the 1970s. Occasionally hovering between sky and earth, suspended on a delicate rope across an uncertain landscape, or held aloft by a winged angel, the painter’s tool exists in an ambiguous ontological state—both physically present and barely there, suggesting art’s tenuous ability to overcome. 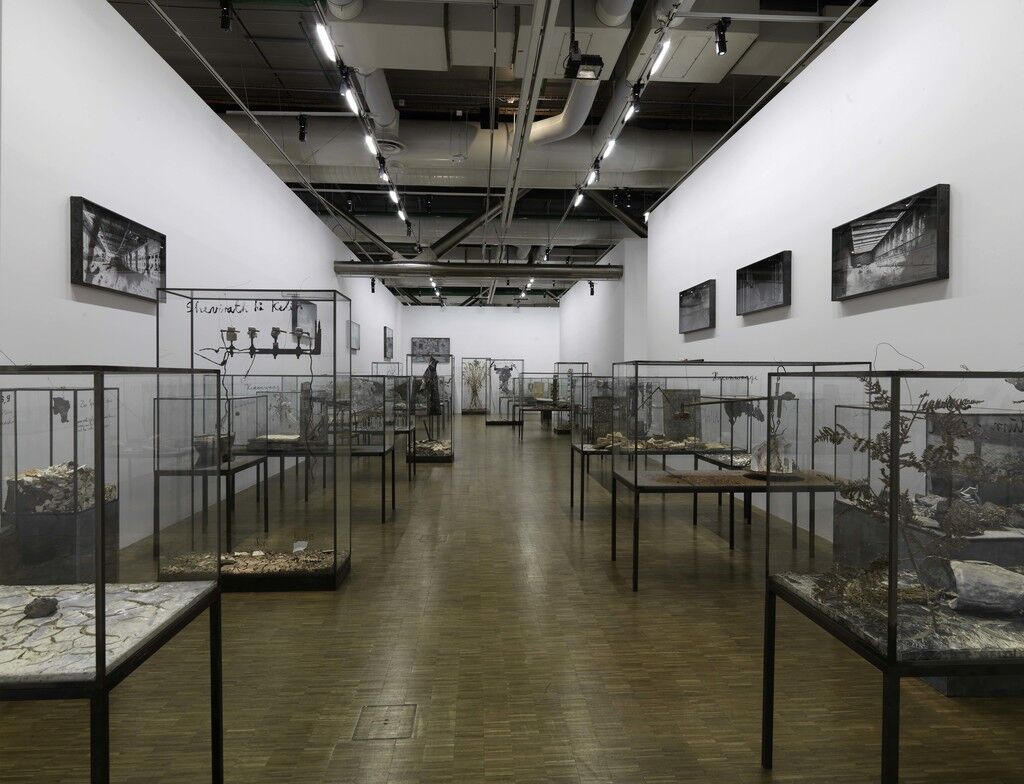 Like all those of his generation struggling with their parents’ Nazi pasts, Kiefer was unsure of his responsibility as a German artist—but a room full of massive architectural paintings from the 1980s marks the reintroduction of history into his work. Because most Nazi buildings were leveled by the Allied bombings, Germany lacked ruins—an absence that aided the country in its will to forget. Kiefer addressed these omissions by imagining the destroyed Neo-Classical edifices built by Nazi architects like Albert Speer as ruins. Encrusted with thick chunks of pigment that seem ready to crumble like stone, these paintings are almost sculptural. The sumptuous Innenraum [Interior] (1981) envisions the empty interior of the New Reich Chancellery as both gold-tinged and deeply scarred, its water-stained walls seeming to sag with the weight of history.
In the 1990s, Kiefer travelled widely in the Middle East and became fascinated by Hebrew thought. Paintings he created during this time brim with references to Jewish mysticism, interrupting the darkness with moments of spiritual epiphany and allusions to a shared arsenal of myths. A penultimate gallery takes that a step further, presenting the artist’s recently completed paintings—enormous, vibrant flowering meadows. Drawing on his ongoing fascination with French culture, canvases like Le dormeur du val (The Sleeper in the Valley) (2013–2015) and Le langage des fleurs et des choses muettes (1995–2015), the latter translating as “The language of flowers and of mute things,” manifest his devotion to cycles of perpetual regeneration. Recasting Baudelaire’s Les Fleurs du mal as symbols of rebirth, the colorful blossoms occasionally emerge from deep wells of dark paint, surging to the surface in an act of resistance.
The presentation culminates in an immersive, site-specific installation. Dedicated to the French writer Germaine de Staël, widely credited with bringing the values of German Romanticism back to France through her contact with the likes of Goethe, Schiller, and Schlegel, the room is oriented around a painting of a black, hoary forest—Kiefer’s symbol for Germany. Before it, the gallery floor is covered with dirt, from which sprout bright little cardboard mushrooms bearing the names of great German thinkers, writers, and artists: Novalis, Johann Gottfried Herder, and Philipp Otto Runge. Here, Kiefer once more draws from the darkness the seed of transcendence, a moment of regrowth, healing, and nourishment surfacing from Germany’s troubled past—and one that underscores the transformative power of art.
Emily Nathan