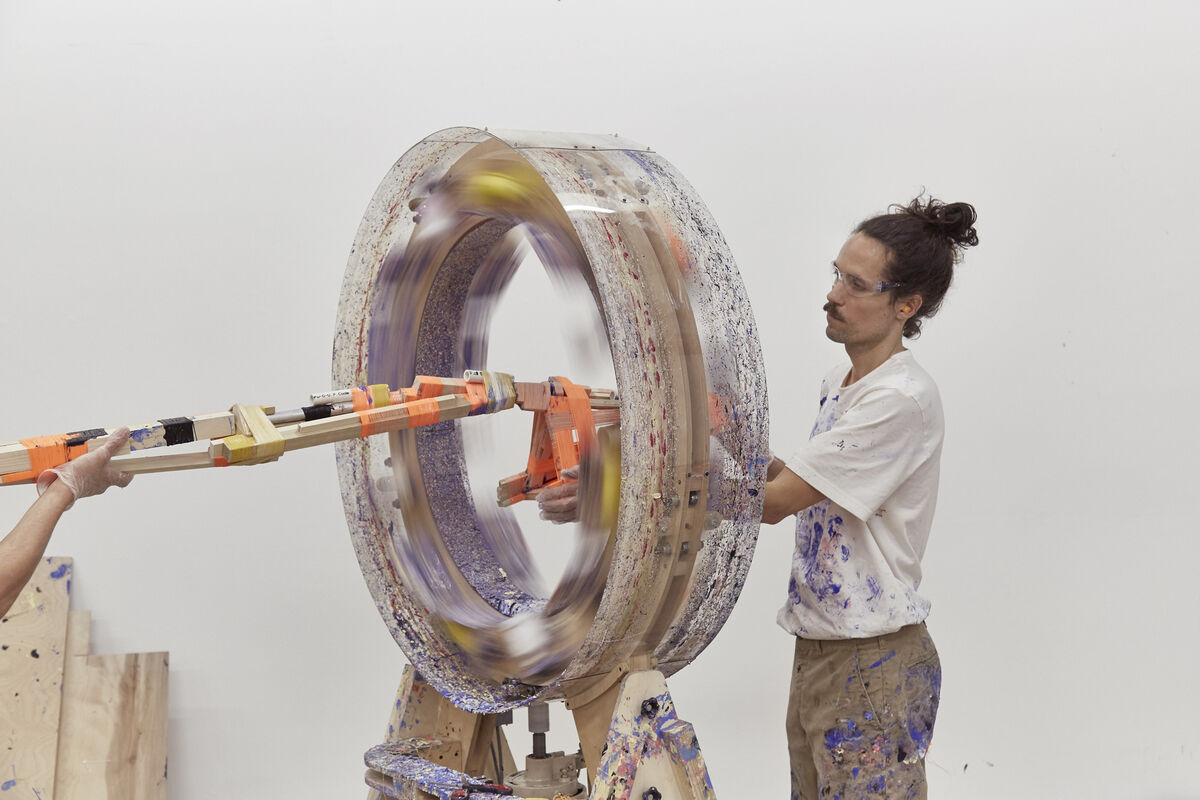 Photographs by Sasa Stucin. Courtesy of the artist and Salon 94, New York.

A paint-splattered floor gives way to boxes overflowing with spools of thread in emerald green, traffic-cone orange, black, and royal blue; woodshop tables are topped with paints, glue, and power tools; cardboard tubes, a ladder, and various pieces of wood lean against the walls; two pairs of headphones, face masks, goggles, and a hairdryer hang from one of the gallery’s wooden pillars. At the center of it all is the Swedish-Chilean designer’s bespoke Thread Wrapping Machine, which he invented in 2012. And cropping up all over the space, more and more each day, are his exuberant, thread-covered creations. 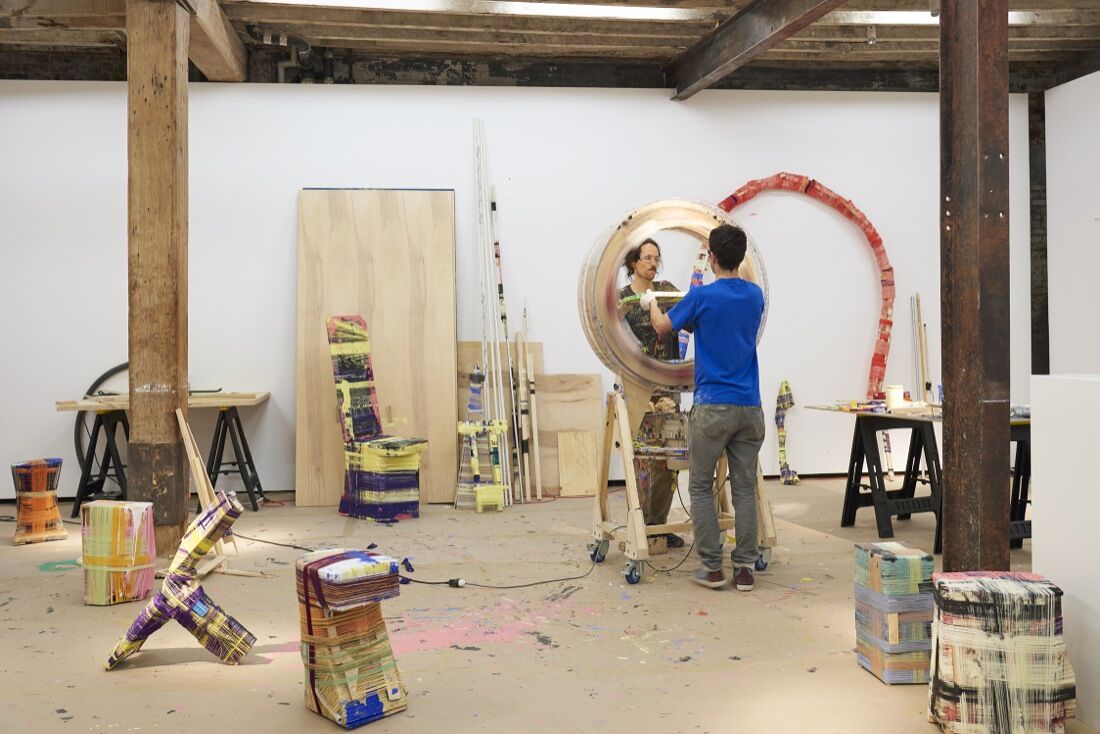 This is his newest exhibition, “Wrapsody,” for which Alvarez is in the process of filling the gallery space with his wares—brightly colored stools, chairs, benches, architectural arches, lamps, and miscellaneous objects that toe the line between art and design. And all of them are held together by tightly wound thread and glue. Each piece takes at least a day to create, and his process, from start to finish, is on view for design lovers and gawkers alike.
I met with Alvarez just three days into the performative exhibition. He welcomed me into the space and steered me towards a new stool, one in which bright pink paint oozes through blue athletic mesh, held in place by threads. “I like an object that has a quite transparent story,” he tells me, referring to the ways his works show traces of the process behind their making. The current show demonstrates Alvarez’s new experimentations with paint and incorporating unconventional materials into the works—he’s even put out an open call for visitors to bring objects for him to include. We sit in a corner on two stools that have dried, surrounded by others that will multiply over the coming weeks—Alvarez explains that he will make as much work as possible over the next 30-odd days, despite continuous foot traffic through the gallery. Photographs by Sasa Stucin. Courtesy of the artist and Salon 94, New York. 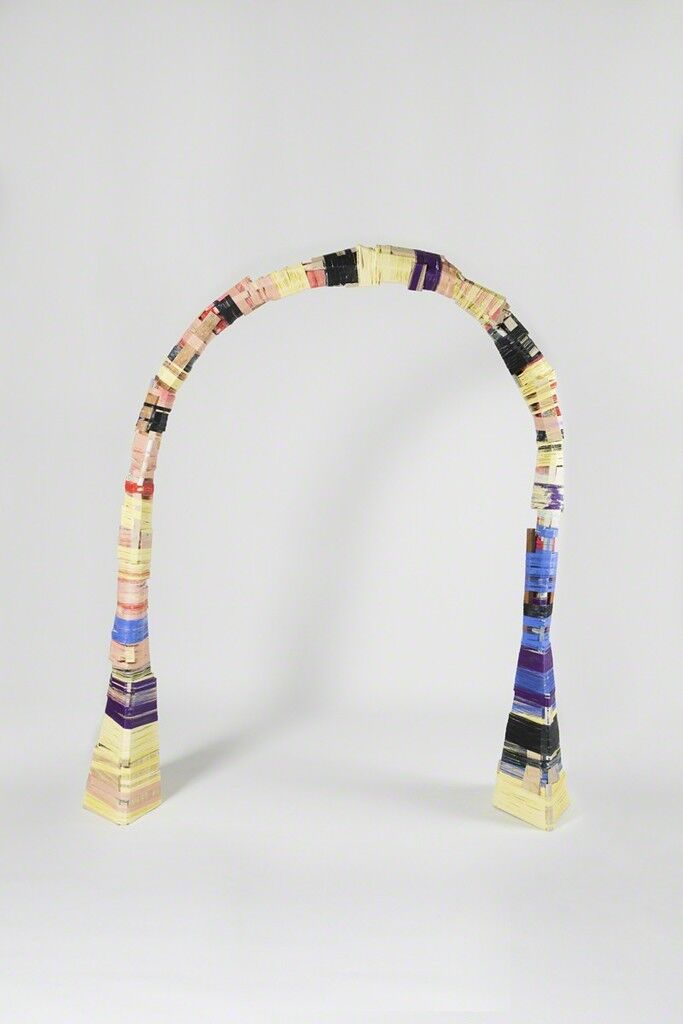 Anton Alvarez
The Thread Wrapping Machine Arch 120415, 2015
Salon 94
The idea for the thread-wrapping machine—a large wheel outfitted with bottles of glue and spools that sits on four legs and is powered by a sewing machine engine—traces back to Alvarez’s days at London’s Royal College of Art, where he earned an M.A. in Design Products between 2010 and 2012. For 120 days he gave himself the task of creating a new object each day, and found himself investigating ways of joining materials, leading him to use thread found in the studio. “After the 120 days had passed, I stopped and looked back on all the experiments, and I came to the conclusion that I needed a tool that could actually wrap threads,” Alvarez explains. So the first iteration of the thread-wrapping machine was born. “I was lucky; it worked the first time,” he remarks. That initial version didn’t have the capability to lubricate the threads with glue, and it had no stand, requiring several people to hold it up for it to function; it was also run by a power drill, which couldn’t handle the task, it turns out. The new version resolved these issues, and Alvarez has been using it ever since. 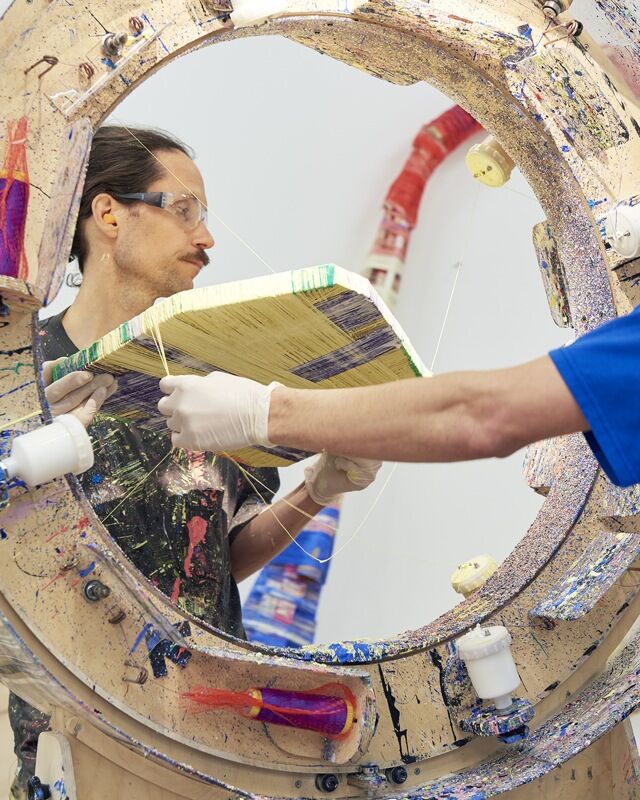 The biggest challenge for the designer, is the physical strain of creating the works—particularly the larger ones. “We are holding them with our bodies and the larger they are, the heavier they are and the more tiring it becomes to work with it,” he explains. Alvarez works with an assistant, who helps him to hold the pieces being wrapped. The weight of the objects, combined with the time it takes to ensure that enough thread has been wound around them, requires strenuous effort. 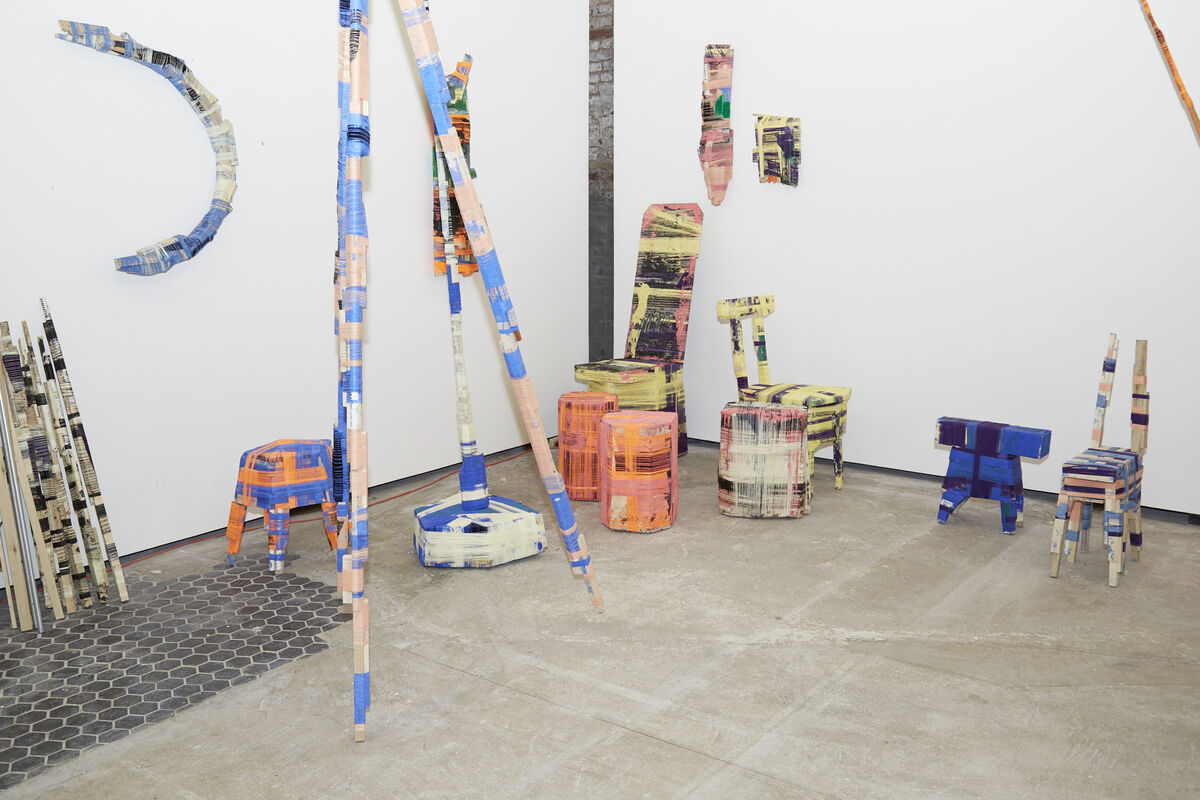 Photograph by Sasa Stucin. Courtesy of the artist and Salon 94, New York. 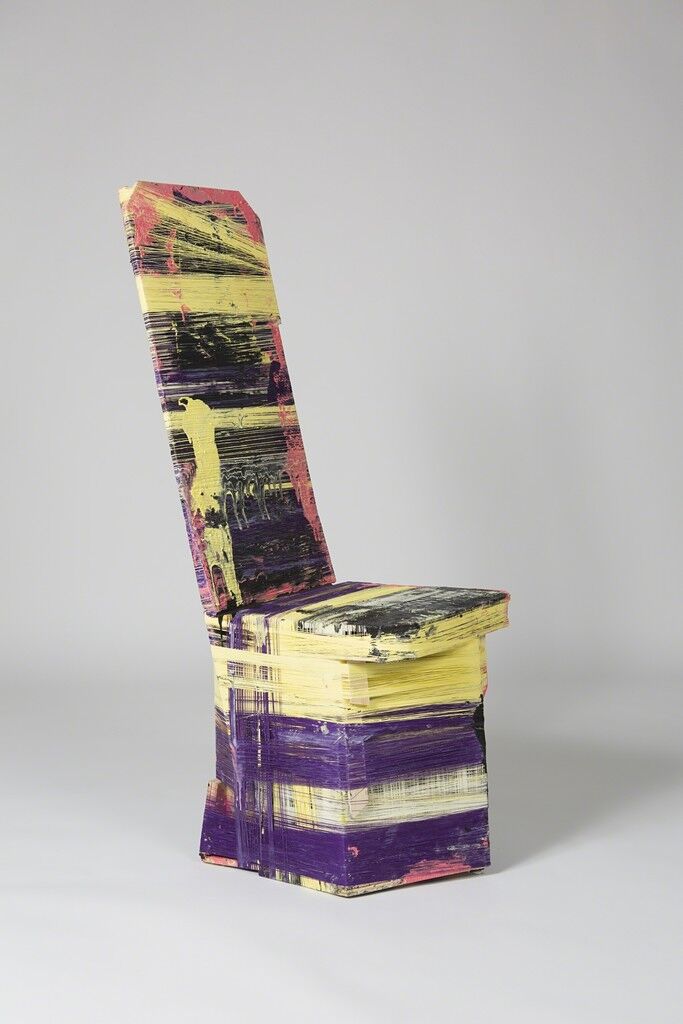 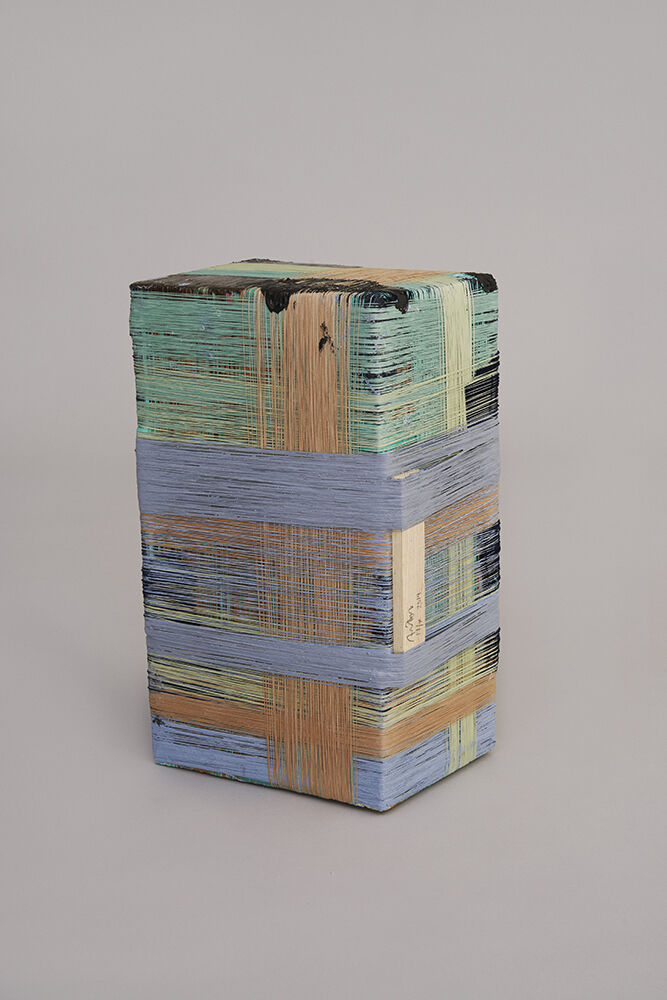 Anton Alvarez
The Thread Wrapping Machine Stool 170714, 2015
Salon 94
Alvarez comes to New York following two major museum acquisitions; the Swedish National Museum and Röhsska Museum both recently added his works to their permanent collections. And despite the unconventional nature of his practice, it is deeply entwined with traditions of Swedish design. Alvarez only arrived at RCA after pursuing traditional cabinetmaking training and a degree in Interior Architecture and Furniture Design at Konstfack, Stockholm’s University College of Arts, specialized in crafts and design.
One can’t help but sit on one of his stools or chairs without examining its making—which is exactly what Alvarez hopes will happen. He sees them as “a snapshot from a film which has been stopped, but we could play it backwards or forwards.” Indications of the elaborate creation process can be seen in the works—especially with the addition of paint. “I add pigment into the glue to make it as a paint, so when the thread gets wrapped and glued onto the pieces, it also gets dyed and colored. The pieces have an imprint of color on them.” He adds, “When we’re holding them, we also have the paint and the pigmented glue on our hands, and you can see the traces of our movement around the pieces, which I kind of like. It makes the process quite transparent.”
I return to the gallery four weeks later, to find enormous progress. Whereas before there was a handful of objects in various states of completion, now there are well over a dozen finished objects that range from delightful little stools and a bench with legs made from hockey sticks (a gift from a visitor), to a looming pink-and-blue lamp in the process of being wired, and a large architectural arch. Additionally, several amorphous, thread-wrapped objects have crept up onto the walls. The designer tells me that his future holds more investigations into the architectural potential of his craft. “I think what’s next within this project is to explore the architectural aspects of it and see how the scale could become larger,” he explains, “and developing new tools and versions of this machine that are more suitable for larger things. I have made a version of this machine which is more meant for architecture, but that machine has to be developed.” 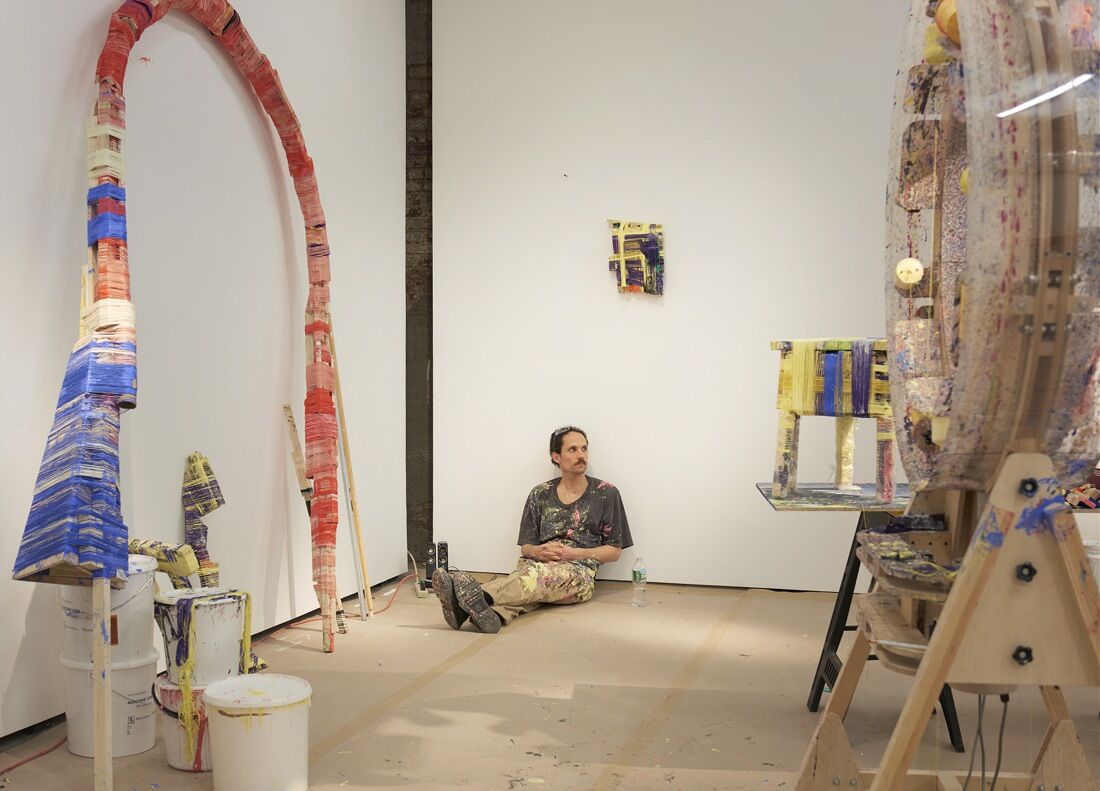 During the final week of the show, the performative, studio portion ends and the exhibition showcase begins. Though, as the designer intended, the works themselves are performative objects, eternally telling the story of their making.
Casey Lesser is Artsy’s Lead Editor, Contemporary Art and Creativity.
“Wrapsody” is on view at Salon 94 Freemans, New York, Apr. 1–May 9, 2015.
Follow Salon 94 on Artsy.
Related Stories