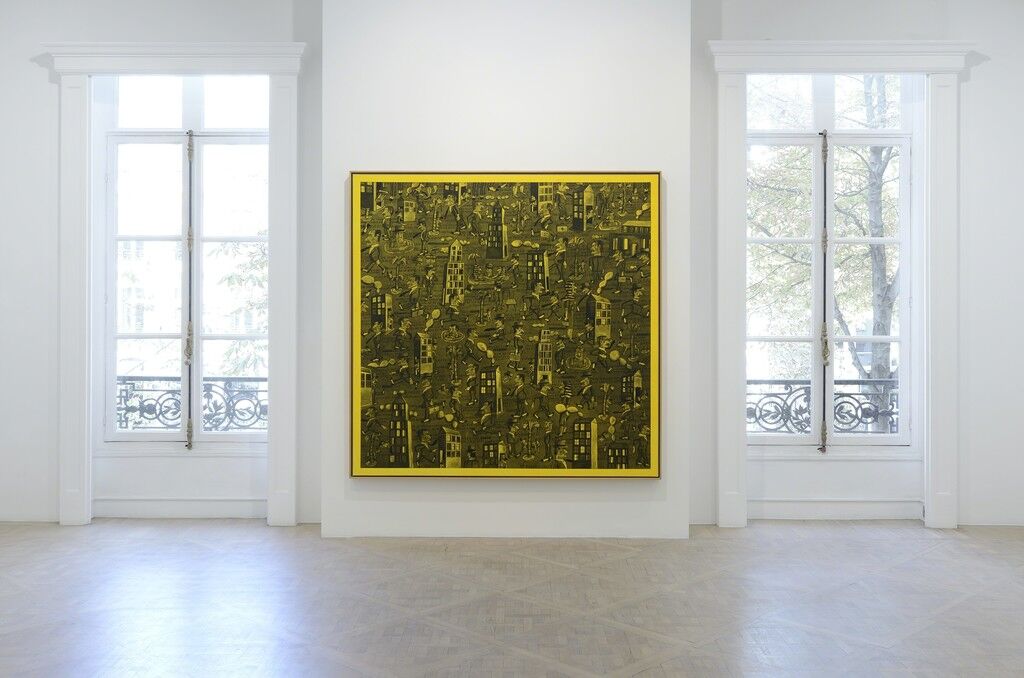 The Argentinian, Paris-based artist
Antonio Seguí
turned 80 last year, but one would be hard-pressed to find any sign of him slowing down in his most recent series of paintings and sculptures. Each of these works, now on view at Paris’s Galerie Laurent Strouk, is a universe in itself, with a cast of tightly knit characters, images, words, and motifs that are rhythmically repeated across each painting, to speak to city life and man’s place within it. 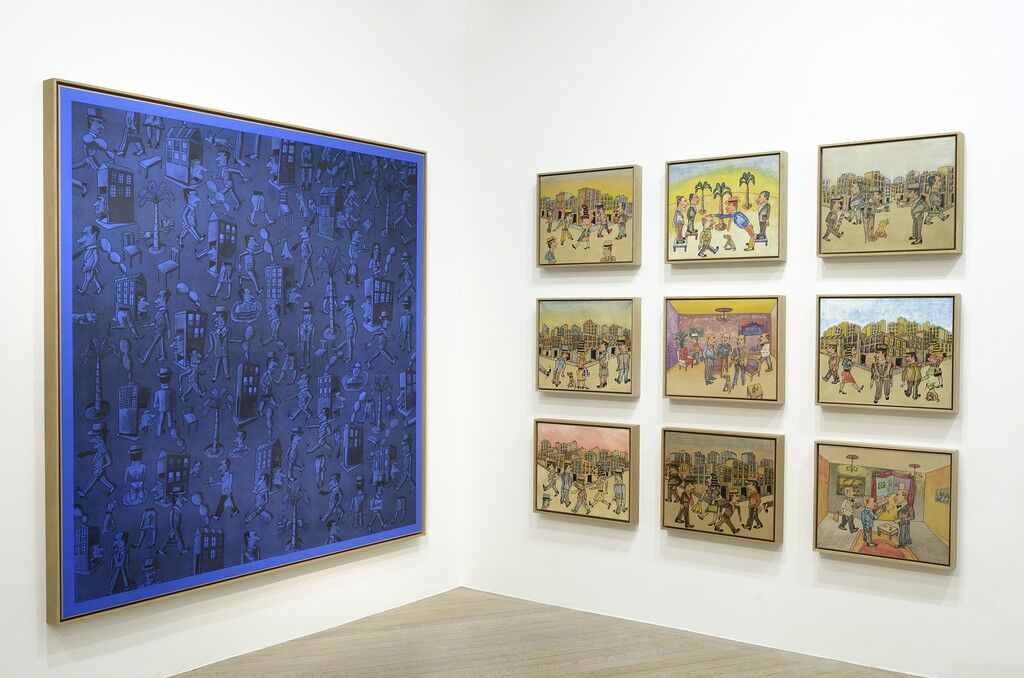 Seguí references the powerful traditions of printmaking, graphic imagery, and political satire found across Latin America in the mid-20th century, in his work. Those of Mexico, where Seguí studied engraving and printmaking, are of particularly heavy influence. And traces of this remain evident in these recent paintings. 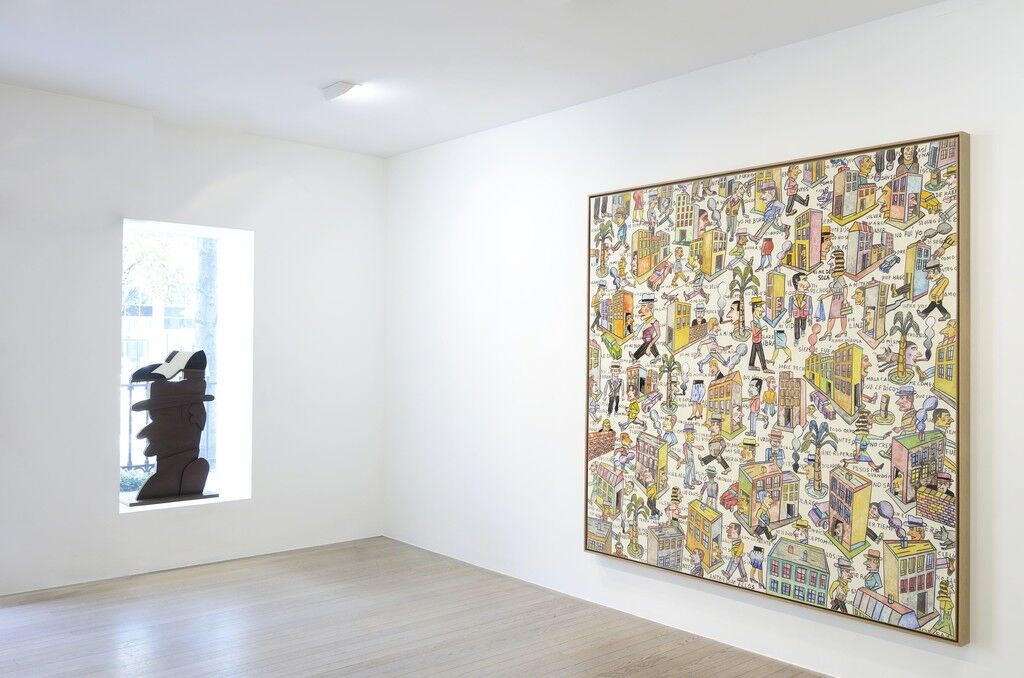 Advertisement
Bold, black outlines softened by lighter, at times acidy shades of green, pink, blue, or yellow, create a tension between cartoon-esque drawings and figurative painting. The space is flattened, busy, almost claustrophobic at times, with patterns of people, buildings, and text spilling over the edges of canvases. The small figures, often men clad in top hat, suit, and necktie, are depicted in full stride. They verge on being caricatural in style, yet rather than humorous in tone, there is a sinister, satirical spirit to each painting that calls to mind
German Expressionist
artists, particularly
Max Beckmann
and
George Grosz
. 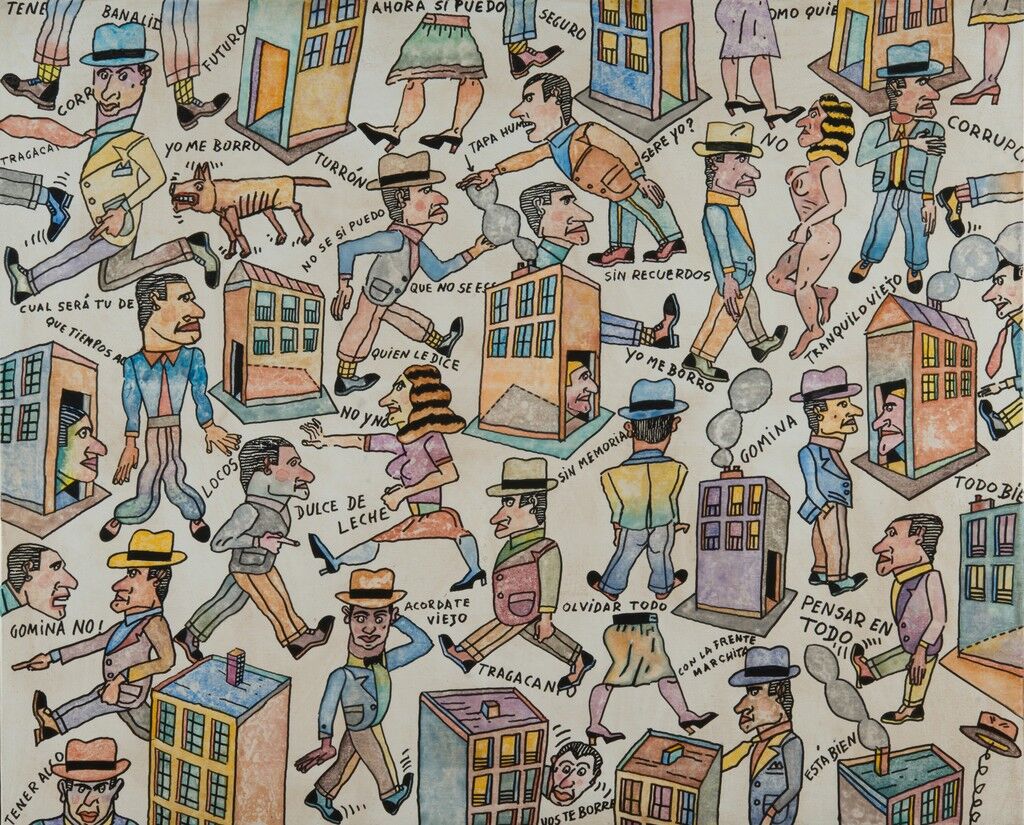 Antonio Seguí
Gente Sin futuro, 2015
Galerie Laurent Strouk
Many works are characterized by heads popping out of door frames, anonymous buildings, barking dogs, and smoke billowing out of cigarettes and chimneys, all overlapping with a series of Spanish words like orgullo (pride), or silencio (silence); the text functions like subtle codes, alluding to deeper meaning. For example, in Gente sin futuro (2015) (which translates to People without a future), heads turn covertly out of buildings, watching the unassuming passersby; are they spies or traitors? In Sentirse Diferente (2013) (Feeling Different), a central, unique figure is depicted larger and in brighter colors, rendering the scene unfolding around him dull and monotonous.
Throughout his long career, Seguí has never shied away from making work that engages the social and political issues of the moment. Paintings such as Sentirse Perseguido (2010) (Feeling Persecuted), and Todos Creímos en Madoff (2009) (We All Believed in Madoff), were made in response to the Bernie Madoff scandal. With new works like Gente Poco Solidaria (2015), an aggressive, incisive work filled with red-faced men carrying knives, torso-less women (literally walking skirts), and chimneys piping clouds of smog, he has clearly not lost any interest in portraying social criticism. Seguí maintains the ability to use satire and art as a means to powerfully express the everyday theater that is life.
—Blaire Dessent
“
Antonio Seguí
” is on view at Galerie Laurent Strouk, Paris, Sept. 24–Oct. 31, 2015.
Follow Galerie Laurent Strouk on Artsy.
Related Stories

Inside My Collection: Schwanda Rountree
Advertisement
More from Artsy Editorial