Architectural Landmarks Come to Life in These Performances 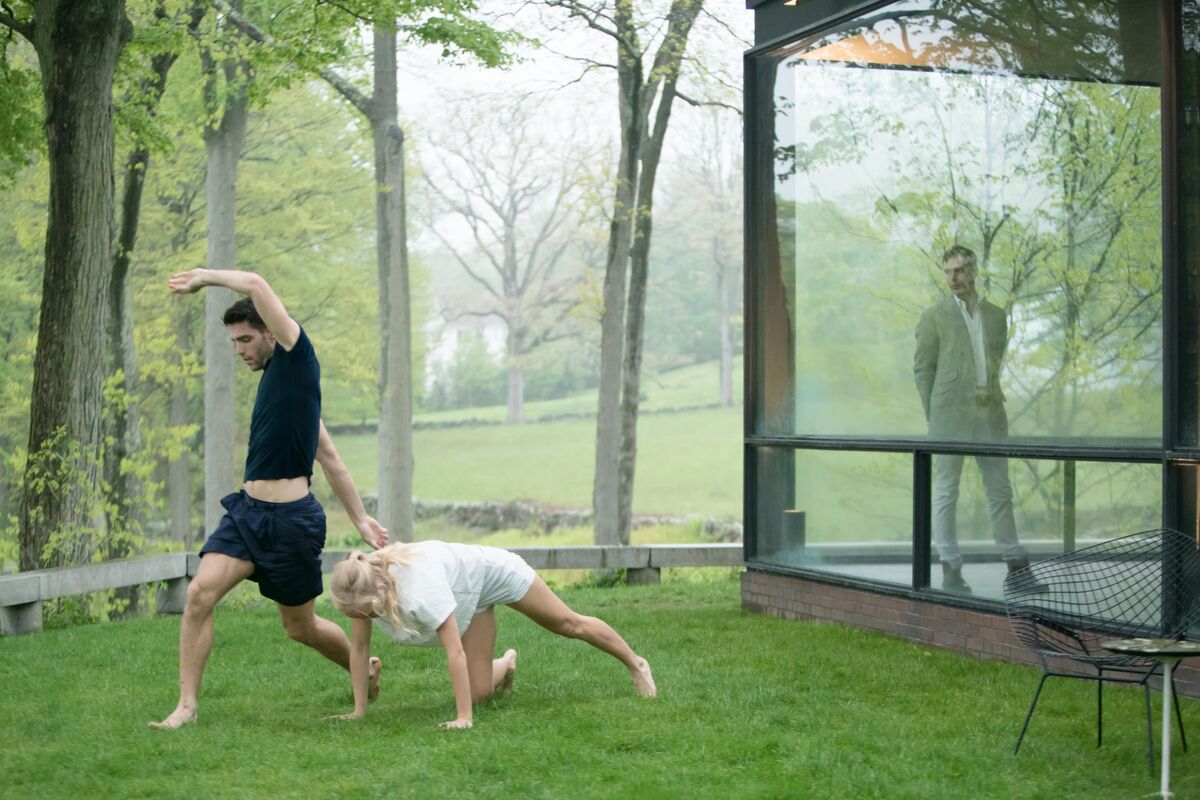 On a recent Tuesday at Brooklyn’s Pioneer Works art center, the late afternoon sun filtered through the long windows and refracted across a curved white wall in the middle of the gallery. The naturally lit, high-ceilinged interior transformed into a stage set as two women began to perform, gesturing and speaking as a small audience looked on.
Lying on the floor in a loose blue dress, the blonde member of the duo kept time by tapping her leg. Clothed in a yellow sweater and pants, her dancing counterpart called out hours of the day and made obscure pronouncements: “At eight-o’clock, two or three martinis in, your shirt unbuttoned one time too many.” Eventually, they alternated roles.
The performers’ movement and speech activated the space: The curved wall began to resemble the arc of an analog clock, while the refracted light evidenced the waning day. The interior of Pioneer Works suddenly radiated ideas about the passage of time. Aptly titled “CLOCKWORK,” the exhibition—which includes a new performance by artist duo Brennan Gerard and Ryan Kelly (known as
Gerard & Kelly
), and is on view through July 1st—directs viewers’ attention to details within the former iron works factory that might have been otherwise overlooked. 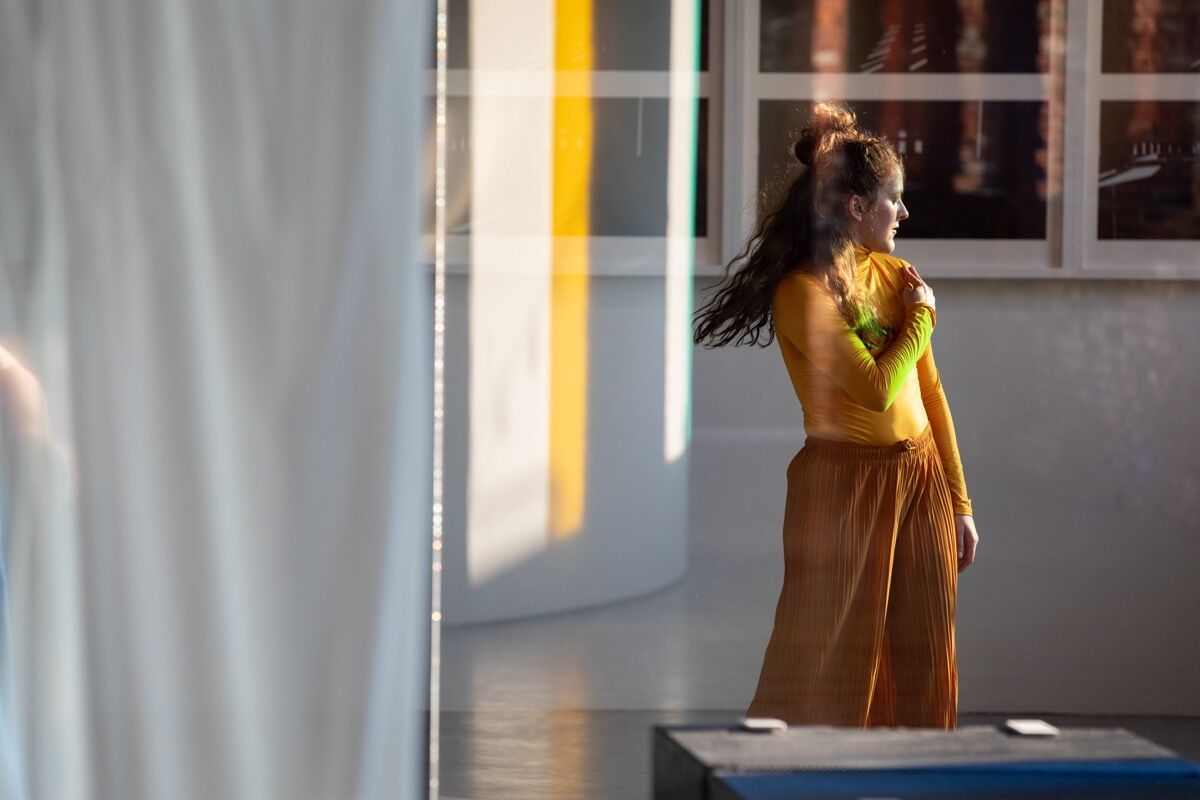 The production evolved out of their larger, ongoing project, “Modern Living,” for which they stage and film performances within modernist architectural masterpieces. In 2016, they orchestrated productions in the Philip Johnson-built Glass House in New Canaan, Connecticut, and the Schindler House in West Hollywood, California. Johnson and his lover (curator, collector, and art critic David Whitney) inhabited the former. The latter was meant for communal living.
Gerard & Kelly are hardly the first creative practitioners to highlight the interplay of dance and architecture. Of course, there’s always a relationship between performers and the space around them.
Trisha Brown
famously articulated this in 1971 when she first staged Roof Piece, in which dancers gestured to each other from atop SoHo buildings. Together, their movements transformed the city skyline into a performance venue. Architecture and choreography often find easy synergies, even in everyday life: A current exhibition in Germany celebrates nightclubs, the often vibrant spaces that house non-professional dancers every evening.
In particular, Gerard & Kelly choose spaces that welcome living arrangements diverging from traditional, heteronormative family structures—in other words, ones that support queer consciousness. With their interventions, the pair infuse pristine, historical architecture with a sense of contemporary intimacy. As in “CLOCKWORK,” the dancers use poetic “scores” that unite the hours of the day with personal memories (“six in the morning, half asleep in the car, jackhammer on 79th Street”). 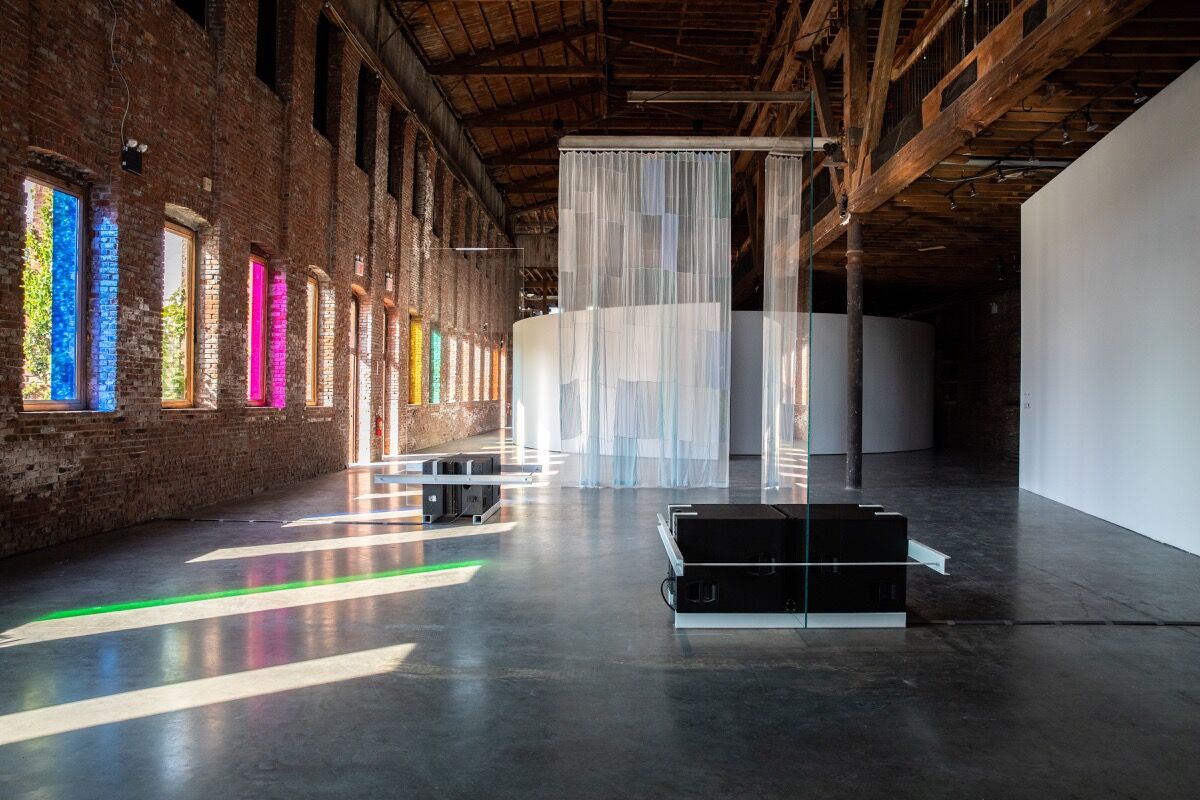 Advertisement
Kelly refers to the exclusive, often hard-to-reach live performances as “the haute couture” element of the project. He views them as “research” for the more widely accessible film Schindler/Glass (2017), in which the dances in Connecticut and California appear one after the other.
That work begins at the Glass House, where two men appear to feud along a brick wall, and two women dance among stone arches by a pond. A mostly unclothed man and woman inside the house seem more engaged with the furniture and floor than they are with each other.
The dance evokes the structures’ metaphorical resonances, animating them anew: The wall quickly conveys an impasse, the glass façade a certain exhibitionism. The next segment at the Schindler House begins in the home, with the dancers again operating in pairs. By the end, they’re all outside on the lawn in a kind of highly choreographed orgy. They’ve achieved, it seems, a certain liberation. The scores throughout all the “Modern Living” projects derive from a series of writing practices. The performers (an amalgam of young people, sometimes friends of Gerard & Kelly) are instructed to write on a personal topic (for example: describe your childhood bedroom) for 10 minutes straight, in an attempt to access the unconscious.
Gerard & Kelly then pull out segments they want to feature in the final performance, “the fragments that we think are meaningful not just to the performer, but that maybe will trigger memories for the listener, as well,” Kelly explained. (At Pioneer Works, he’ll occasionally take part in the performance himself.)
The pair believe that memory—like dance—exists in space. Kelly referenced an ancient Greek pneumonic device, loci, in which orators memorized long poems by associating certain lines with different locations. “We’re very interested in this notion of the house as a blueprint for memory,” he said. 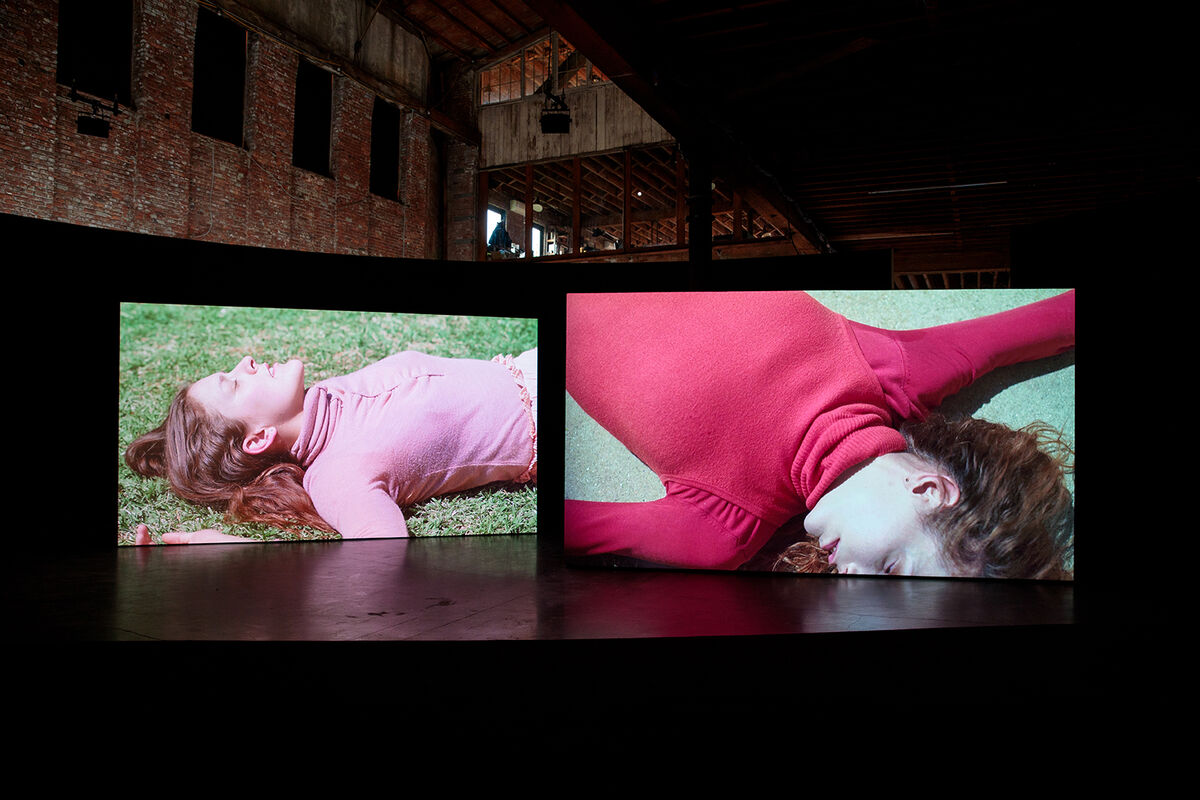 After this outing in Brooklyn, Gerard & Kelly will film two more performances at the Farnsworth House in Plano, Illinois, and at Villa E-1027 in the South of France, along the Mediterranean.
Mies van der Rohe
designed the former for Dr. Edith Farnsworth, a poet and physician who found the space unlivable—the glass exterior left no room for privacy. (At Pioneer Works, a scrim-like patchwork of blue nightgowns hangs from the ceiling, referencing her complaint that van der Rohe hadn’t left her anywhere to hang her pajamas.)
Eileen Gray, an untrained architect, built the Villa E-1027 in 1929. A few years later, her lover, an architecture critic, invited
Le Corbusier
to stay in the home. The famed architect decided, without Gray’s approval, to paint eight
Picasso
-esque murals around the modernist home; she was not pleased. Through dance and performance, Gerard & Kelly plan to reclaim two spaces which had denied prominent, talented women the respect they were due. They’ll infiltrate these homes, imbuing them with new, spoken memories and, ultimately, a more progressive spirit.
Alina Cohen
Related Stories 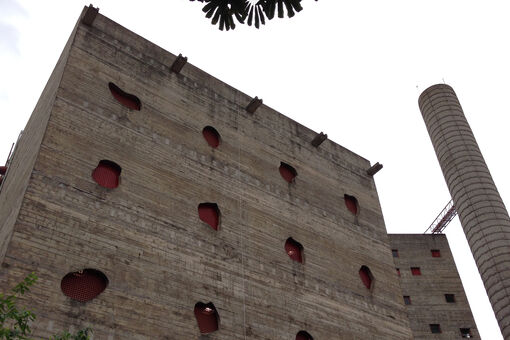