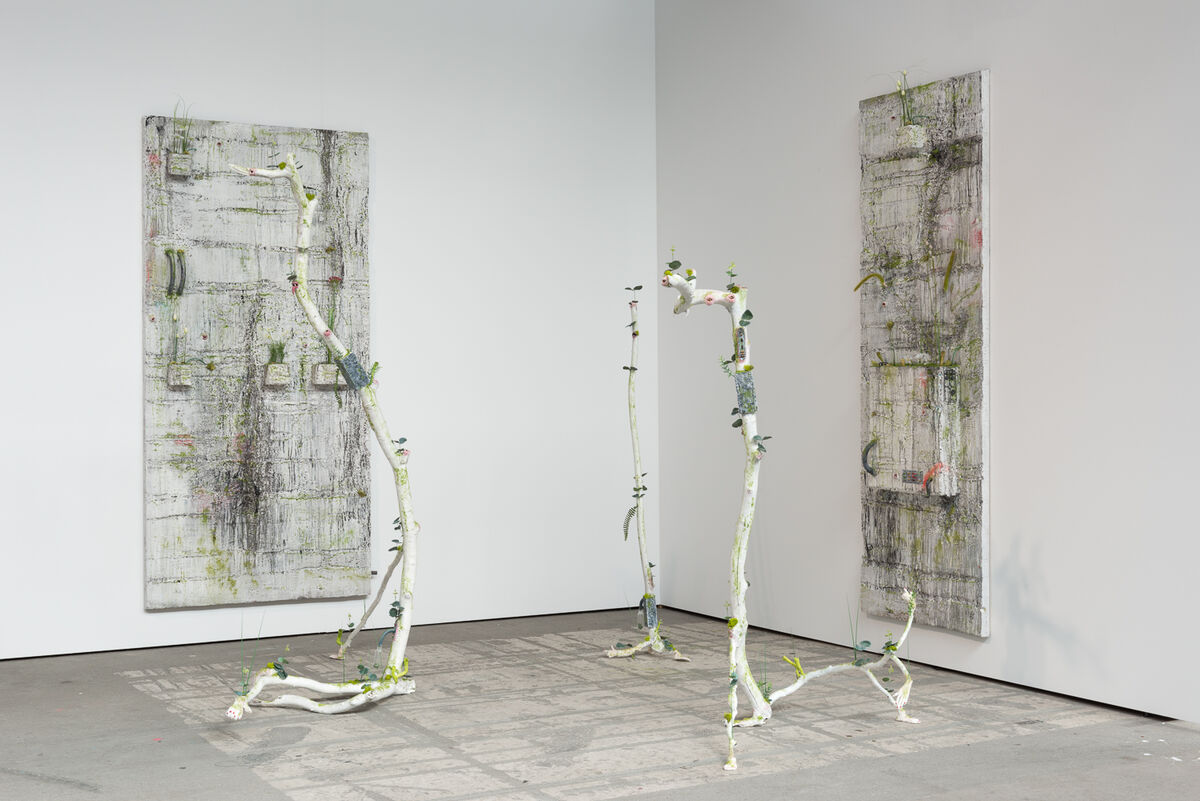 For a city that cyclically re-invents itself, it seems fitting that its premier art fair is also constantly in flux, experimenting with new formats and trying to define its voice. This year, the fair organizers teamed up with architects June14 Meyer-Grohbrügge & Chermayeff to design a “quieter, cleaner, more structured look,” as described by fair director Maike Cruse. In past iterations, galleries often struggled with the fair’s raw modular walls, made from scaffolding, or abandoned the use of walls altogether to show installation based works, making it hard for visitors to tell where the display structures ended and artworks began.
The challenge was answered with a concept based on corners. Cruse explains, “We developed the idea from the artist’s perspective of what works well in presenting their work. We wanted to create the feeling of moving freely from space to space like walking through a museum.” Tall and narrow cross-sectioned walls were positioned in grids, offering unique, outward facing corners for individual gallery presentations. Furthermore, for a fair that has traditionally focused on solo artist displays, the new format opened the possibility to create curated booths with up to four artists—should a gallery purchase four corners.
As opposed to typical fair booths, which attempt to recreate the intimacy or atmosphere of a white cube, this open plan leaves no place to hide. Navigating the space felt like bouncing around in an oversize game of jacks. From any angle, multiple presentations can be seen all at once across the exhibition hall, each a gallerist’s valiant effort to prove their artists’ value to the world. Reflecting on the experience, the 1987 classic film Dirty Dancing comes to mind: the stout and handsome dance teacher Johnny Castle (Patrick Swayze) grabs the hand of his talented protégé Frances “Baby” Houseman (Jennifer Grey) in the midst of a summer ball, pulling her away from her family table and stating, “Nobody puts Baby in a corner.” Abc, like any other fair, is a courting game of display and networking. Although it may seem counterintuitive at first, the new layout works to the artists’ benefit. Works were not pushed into corners but rather expanded out from them, forcing the viewer to move in closer and commit focused attention such that the visual competition in the background disappears from view. 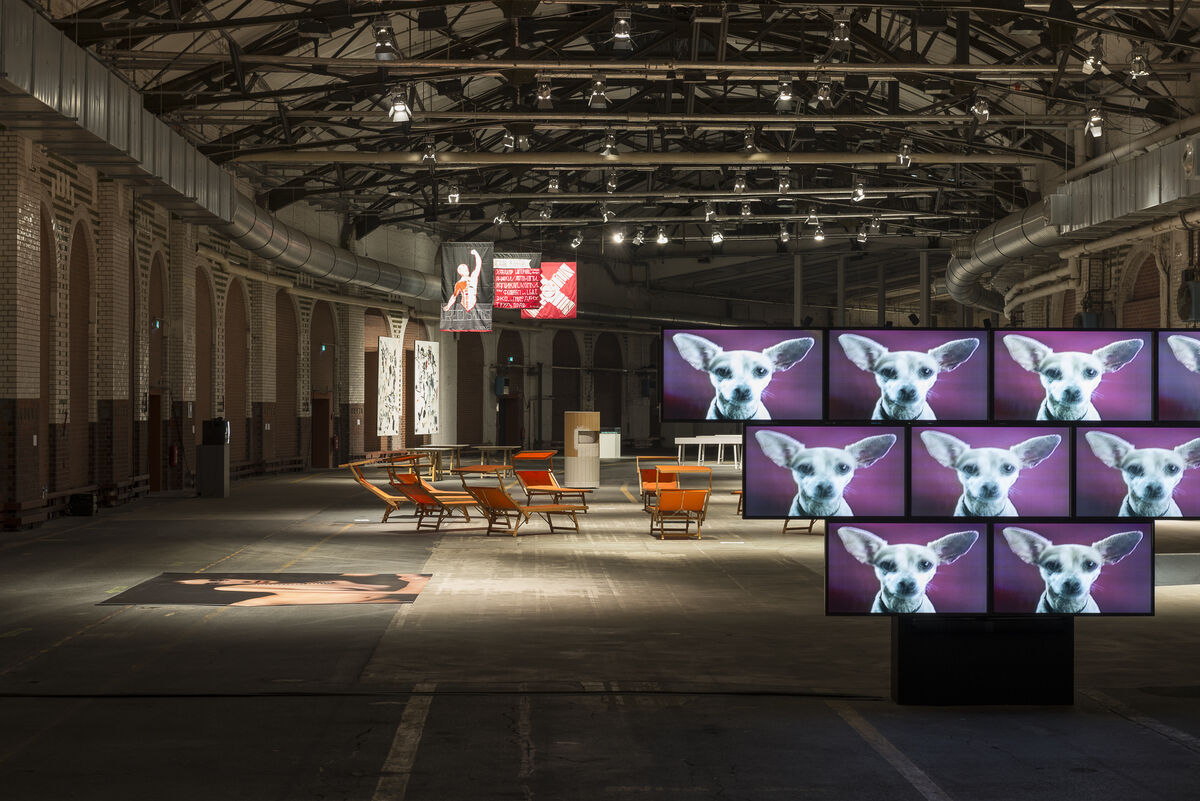 Another change for 2015 is the introduction of a formal application process for exhibitors as opposed to select invitation, providing the opportunity to bring in a wider and more international set of galleries, including new addition Magician Space from China. Whereas the past two editions of abc were envisioned with a festival atmosphere with numerous performances and events, this year the fair focused strictly on the material artworks themselves, providing focused platforms for painting, drawing, and video works hung on clean walls with larger sculptures and installations peppered throughout the open spaces in between. Describing the changes, Cruse says, “It’s part of our mission to try new things.”
Alongside the fair in a lengthy, banana-shaped hall, the exhibition “Proximities and Desires” culls notable works from the homes and cellars of local private collections. Curator Nikola Dietrich chose a representative selection of works from each collection, rarely seen in public. “You can feel the passion behind each collection through the works on view,” said Cruse.
Sturtevant
’s video installation Elastic Tango (2010) was provided by the Julia Stoschek Foundation e.V.,
Giovanni Anselmo
’s sculpture of a sea sponge abutted by two iron beams, Respiro (1969), by the Collection Paul Maenz, and
Jenny Holzer
’s Untitled (Truism, Essays) (1996) of wallet sized L.E.D. signboards was on loan from Berlin’s noted new media collector Ivo Wessel. 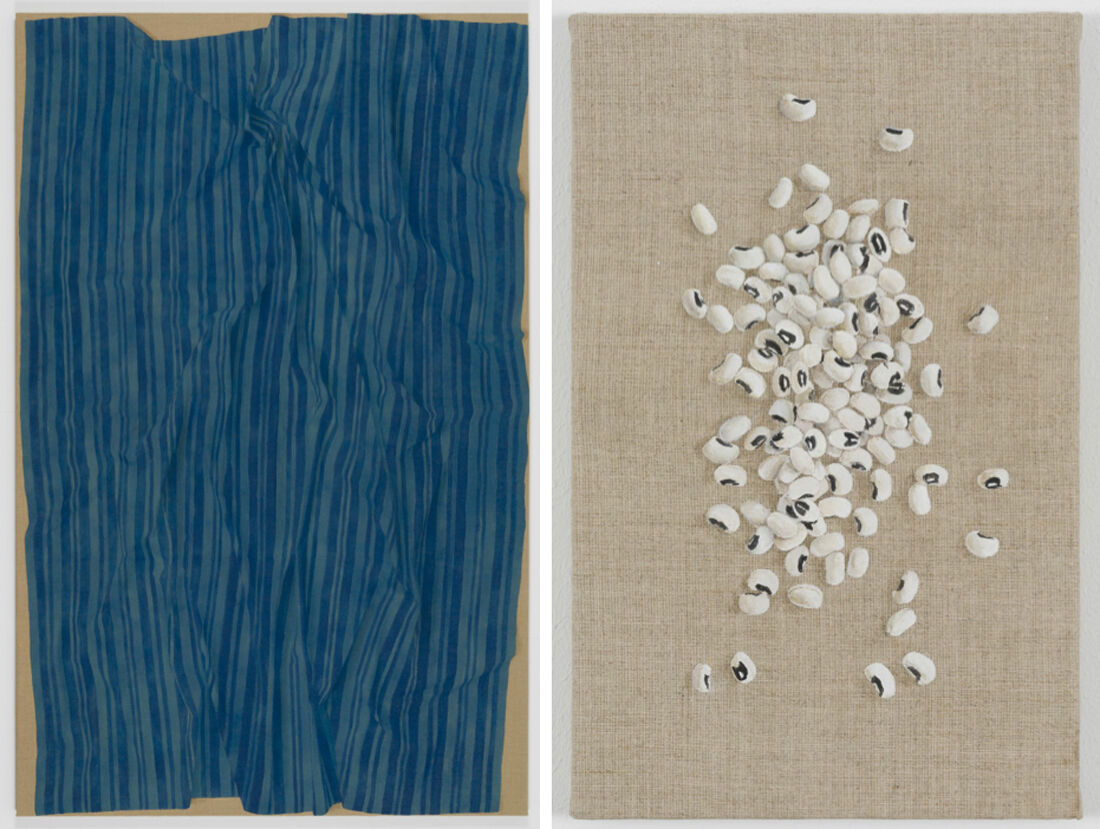 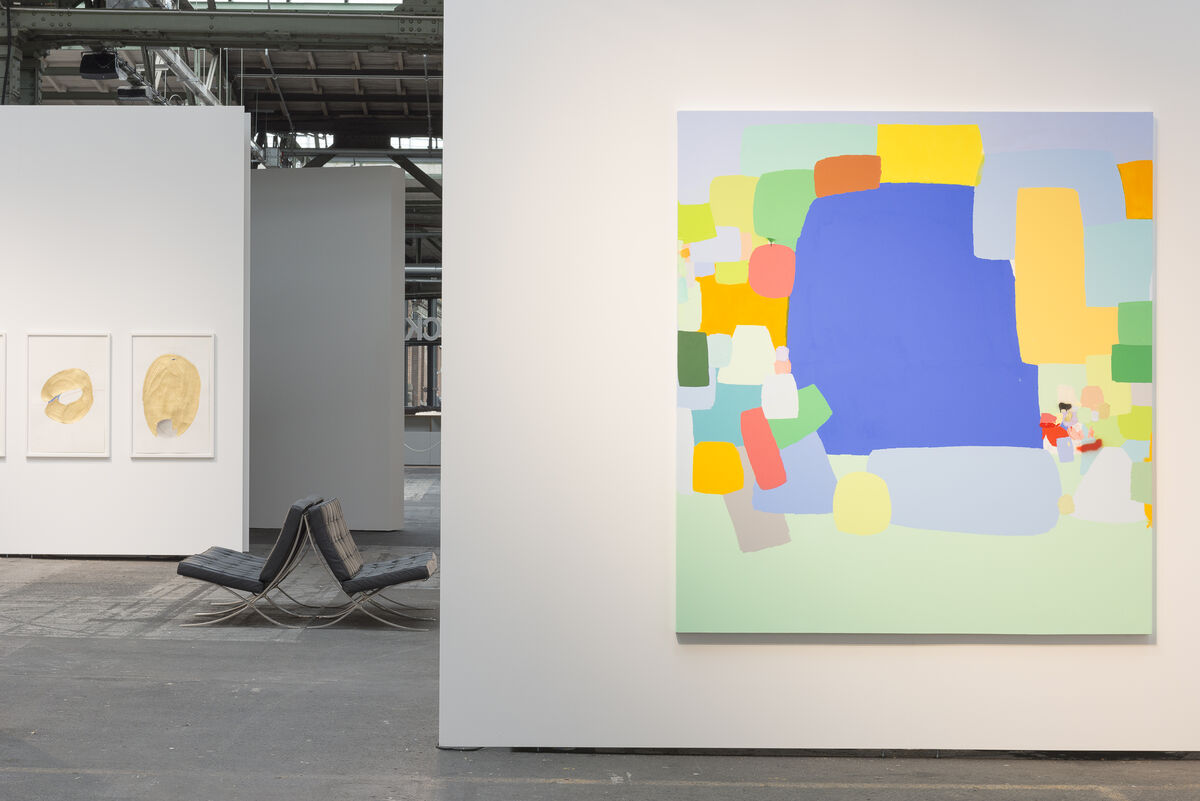 At Neumeister Bar-Am’s booth, Kate Cooper’s mesmerizing three-part work, Experiments in Absorption (2015), is a study in metaphysics and immersion expressed in the digital realm. The work includes a video, lightbox, and c-print featuring images of localized body parts like a woman’s shoulder blade and elbow emerging through a hazy sheath, an image of a human head cast in copper slipping behind a flattened surface, and a video of a broken infinity sign being overtaken by a pulsating white liquid—and then disappearing into a black billowy cloud of smoke.
Taking full advantage of the curated booth option, more established galleries show broader selections of artists from their stables. Capitain Petzel mounted an impressive selection of
Matt Mullican
’s transfer paintings,
Robert Heinecken
’s collages, and
Natalie Czech
’s conceptual photography in one go. 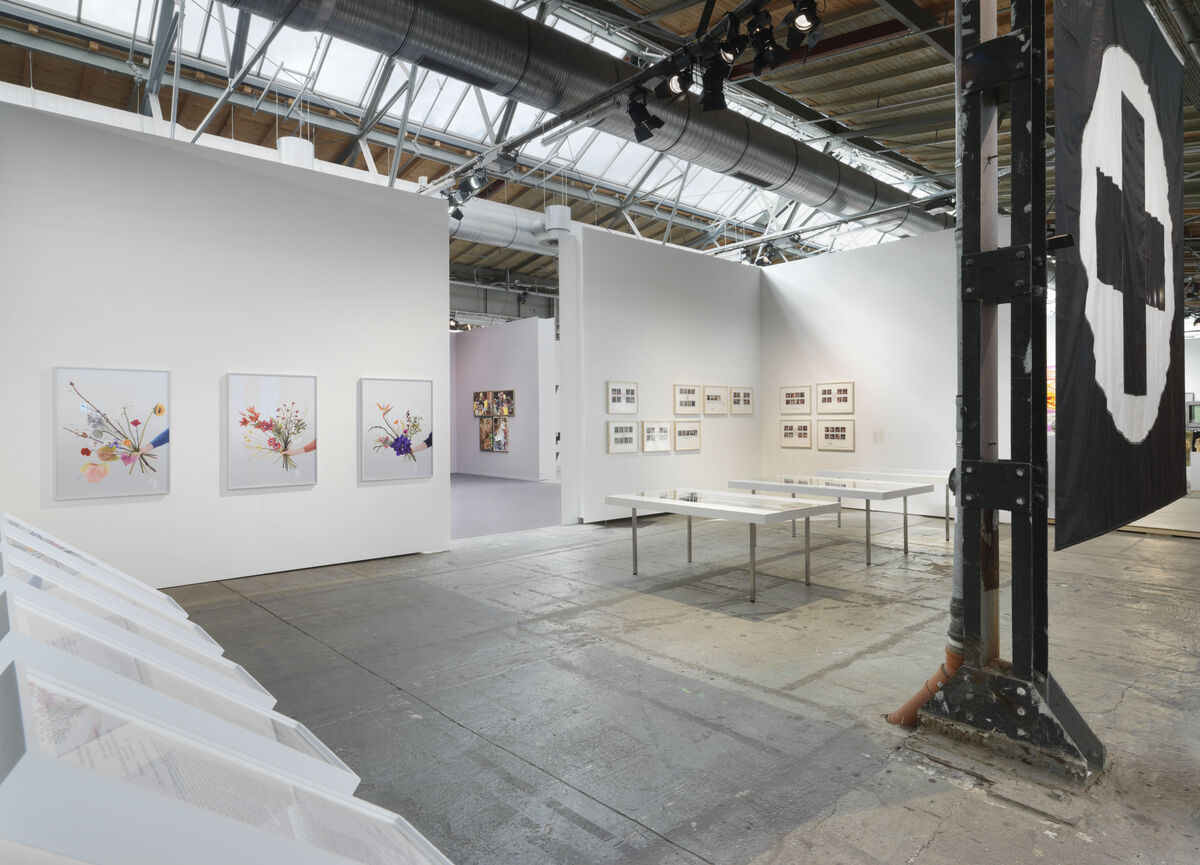 Nearby, Esther Schipper and Johnen Galerie combined their booths at a fair for the first time since they announced their official merger earlier this year.
Martin Boyce
’s hanging lantern work, Years and stars and storms (2012), was strung symbolically from corner to corner, literally tying together a room, which includes works by
Ari-Benjamin Meyers
and
Ryan Gander
. Drawing the booth further outside itself,
Jean-Pascal Flavien
presents a series of architectural models for actual houses, based on concepts from short stories by J.G Ballard, whose 3D rendering and architectural plans for building can be purchased and built. Highlights include ballardian two (what will you do with your time?) (2015), and split house (2015), the latter referencing modernist architect Rudolph Schindler’s mirrored Schindler Chase House.

The fair’s winning presentation, however, was a collaboration between Vienna’s Galerie Martin Janda and Berlin’s neugerriemschneider, a playful and historical combination of works by Slovakian artist
Július Koller
(1939–2007) and Thai/Argentinian artist
Rirkrit Tiravanija
, previously on view at the Garage Museum of Contemporary Art in Moscow. Witty collages, photographs, and found objects such as Slovensky Trans-Art (1990) and UFO (2003) hang on the walls, representing Koller’s interests in unidentified flying objects and table tennis.
Situated nearby was Tiravanija’s untitled 2012 (MORGEN IST DIE FRAGE) (2012), developed as a direct response to Koller’s Ping-Pong Society, the subversive anti-happening events he organized in Bratislava in the 1970s, encouraging visitors to communicate with one another in public despite the rules of the oppressive Communist regime of the time. Tiravanija’s four ping pong tables, silkscreened with the phrase “Tomorrow is the Question” in German, were installed for visitors’ use, encouraging a platform for exchange within the fair context. Creating such a modus while simultaneously looking to the past, and to the future, offers a welcome reminder that the most meaningful value of an artwork exists through the active engagement of its audience.
Arielle Bier
Art Berlin Contemporary is on view at Station Berlin through Sept. 20, 2015.
Related Stories