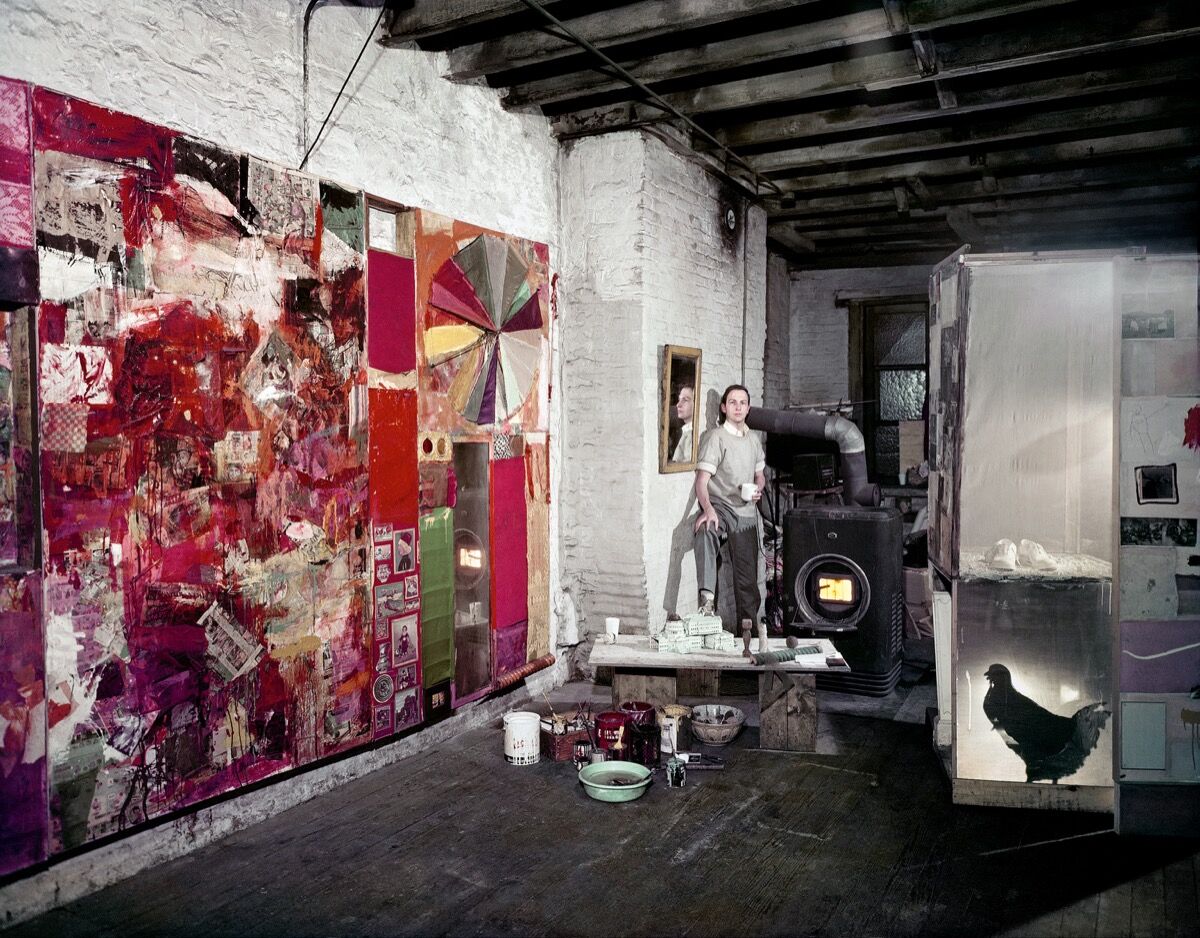 The
Robert Rauschenberg
we know and love is well-enshrined in his latest retrospective, “Robert Rauschenberg: Among Friends,” opening at the Museum of Modern Art on May 21st. But maybe it’s time to start questioning our conventional image of the artist for what it evades.
The old story goes like this: He would have been the greatest
Abstract Expressionist
alive if he wasn’t so busy destroying the old guard of
Pollock
s and
Rothko
s. Rauschenberg’s early paintings indicate an aptitude for the densely philosophical abstractionism he would later rail against. Works like Untitled (1951) inherit that sinking line of thought, pulsing like jazz across the dark, gravelly textures of his enormous black monochromatic painting. But Untitled is also transgressive, disrupting Abstract Expressionism’s sacred sense of time and place; there are no brushstrokes here, and the canvas panels can be rearranged in any order.
The young must kill the old, and so Rauschenberg dismantled the older generation’s legacy by painting over it. “You have to have the time to feel sorry for yourself in order to be a good Abstract Expressionist,” he once wryly quipped in the 1973 documentary Painters Painting.
Underlying these formalist and rhetorical jabs was a deep sense of angst—the nervous inheritance of a post-war, nuclear world. Rauschenberg hoped to see the art world born anew, unrestricted by what had become the authoritarian dogma of Modernism. Alongside his
Black Mountain College
colleagues (people like
Susan Weil
,
Cy Twombly
,
John Cage
, and Merce Cunningham), Rauschenberg became part of New York’s neo-avant-garde who presaged the arrival of
Pop Art
with references to popular culture, gritty performance art, and irreverent downtown crudities. 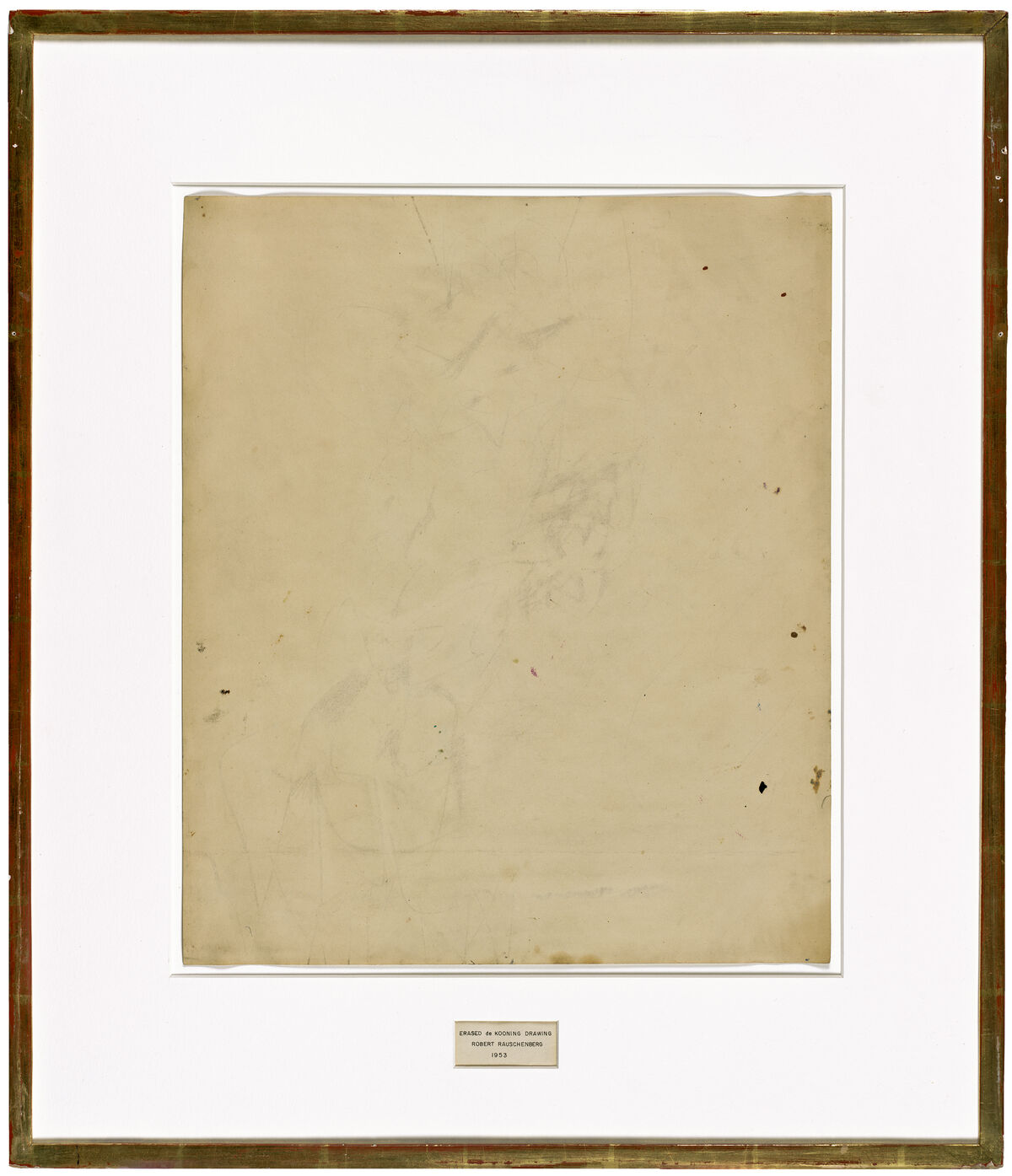 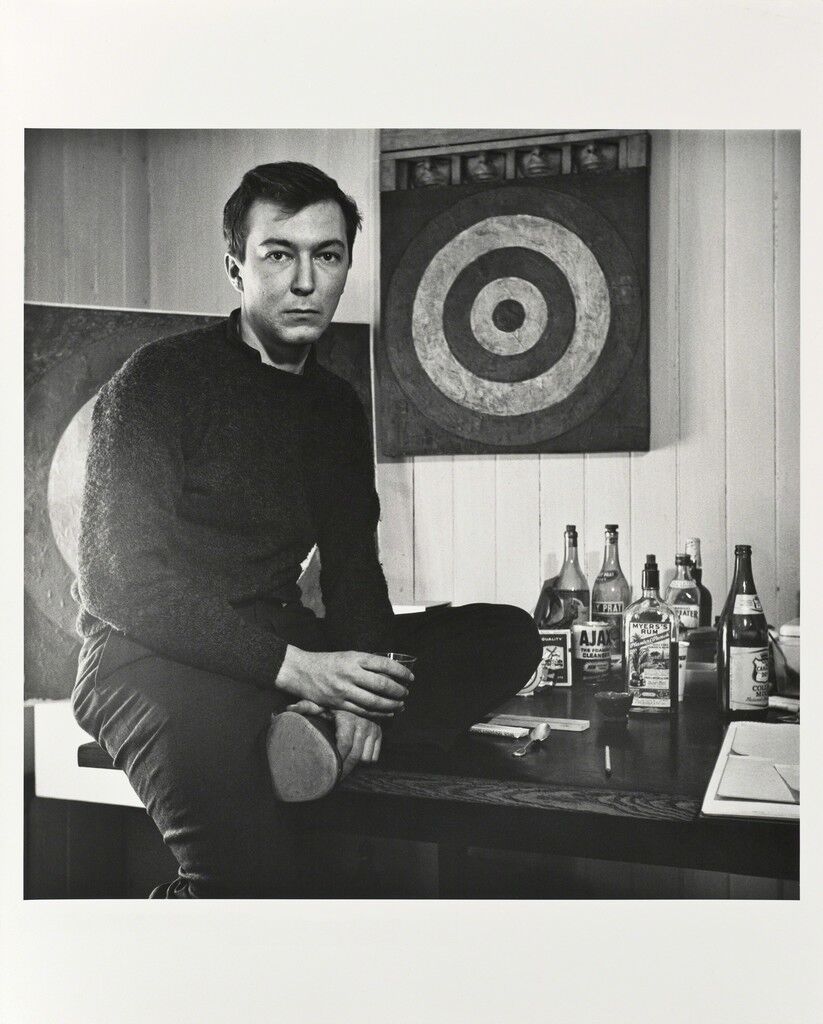 Robert Rauschenberg
Jasper—Studio N.Y.C., 1958; printed 1981
San Francisco Museum of Modern Art (SFMOMA)
This sums up the essentialist narrative that art historians have built around Rauschenberg, one that MoMA continues to employ. It frames the artist as a headstrong upstart, a grand usurper (and yet a continuation) of Jackson Pollock’s legacy as American painting’s champion.
This version of Rauschenberg fits a pat narrative of masculine Modernism so enshrined in the legacy of post-war art that we sometimes forget one important fact—that it isn’t wholly true.  Moreover, we lose considerable insight into the work of post-Abstract Expressionists through this lens—mainly, we lose a sense of their shared queerness.
MoMA’s new retrospective is an “open monograph” exhibition, allowing us to see the artist’s greatest hits alongside those of his colleagues. Unfortunately, the exhibition’s curators fail to engage in, and outright choose to ignore, the group’s shared sense of queerness (and this is not the first time that’s happened). The show once again leaves it all to subtext for fear of overturning the traditional hetero-masculine box the art world likes to see our modern misters fit inside.
The reality is that Rauschenberg maintained a fluid sexuality. After he and Weil divorced in 1953, Rauschenberg had a brief fling with Twombly, which subsequently led to a romance with his collaborator,
Jasper Johns,
from 1954 to 1961. All three of Rauschenberg’s former lovers appear prominently in Among Friends, as well as other gay compatriots like Cunningham and Cage. It’s no surprise that collaboration was the soul of creation for these artists, who created a queer visual vocabulary before the actual language existed. 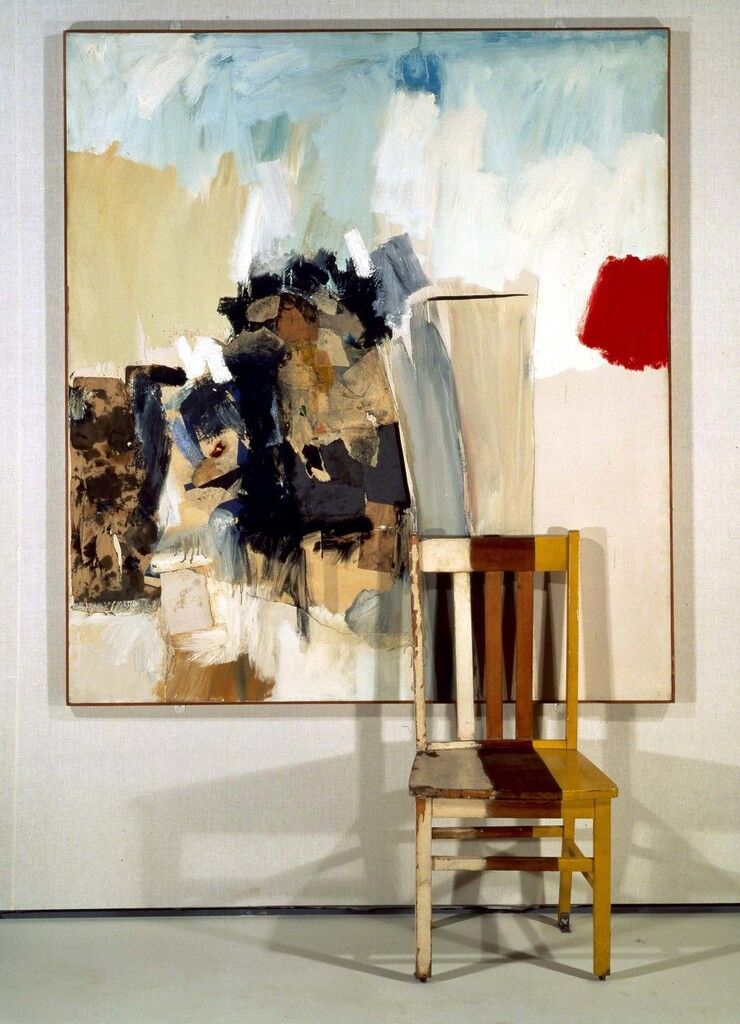 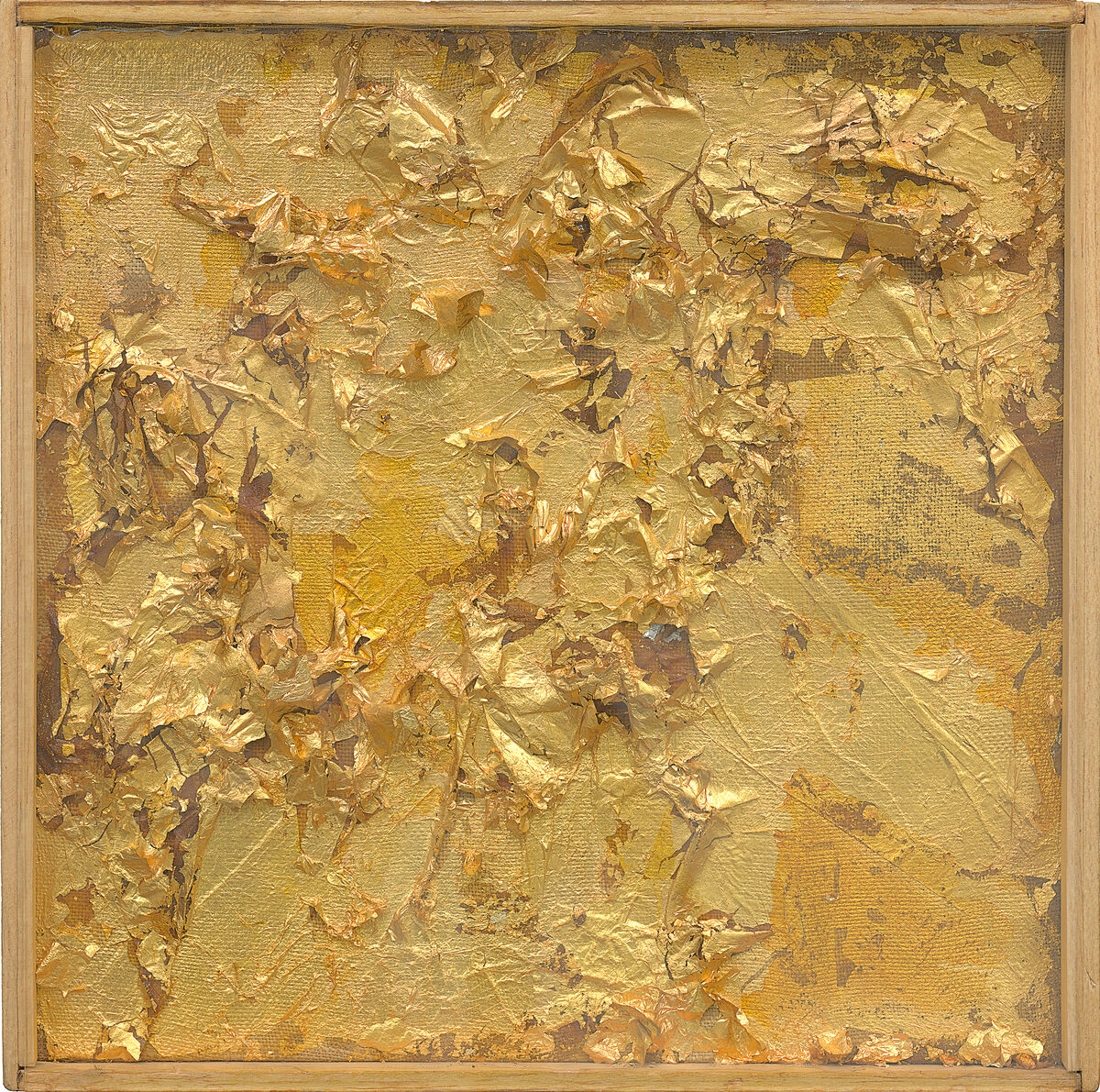 Advertisement
Like Cunningham and Cage, Rauschenberg found beauty in everyday objects. Through close observation, the quotidian could bloom into something either sublime or subversive. This is a tenet of queer art, the ability to transform normativity into the unexpected.
We see it in Cunningham’s dances, wherein pedestrian movements intersperse with ballet efficiency. We see it in Cage’s compositions, in which everyday objects ache and moan their way into an indeterminate musical composition. But Rauschenberg was arguably the best observer of the bunch. He was a
Duchamp
ian editor, a purveyor of objects that constitute the thingness of identity—and then he threw it all onto the canvas, splashing everything with bright color.
Many of Rauschenberg’s works in the show capture this communal quality of finding the unexpected within the quotidian. For example, Pilgrim (1960) interfaces with Cunningham’s dance Antic Meet (1958), in which the choreographer danced with a chair on his back. Rauschenberg takes that idea and translates it to painting; he paints with the chair, smudging the pigments down the canvas as low as possible. Then, for added humor, he tacks the chair onto the painting and calls it collage.
And it would be remiss not to mention Rauschenberg’s Mud Muse (1968–71), which embraces Cage’s taste for incidental music. The piece consists of a large aluminum tank holding 8,000 pounds of mud with a bass track playing underneath that would cause bubbles to rise and burst at the top of the mud pit. Here, Rauschenberg revels in the spectacle of combining art and technology with earthly refuse. His ability to animate something as disgusting as mud into music indicates a desire to revise our conception of beauty. 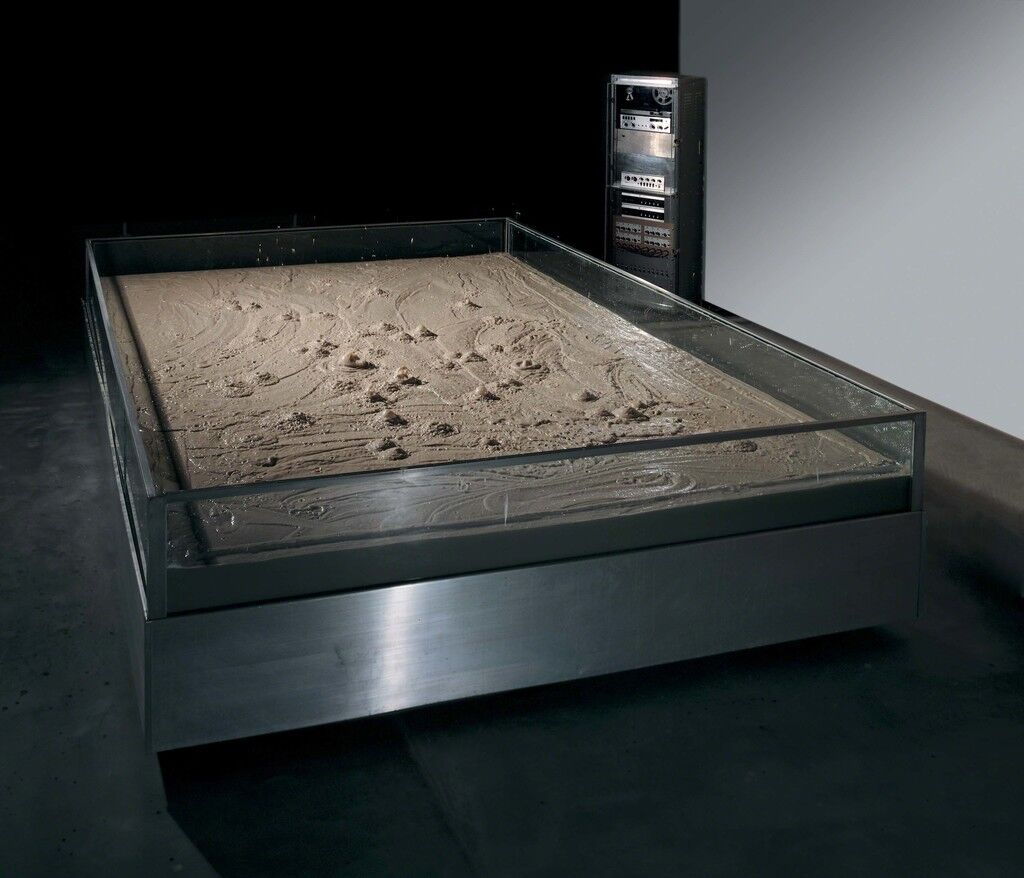 Robert Rauschenberg
Mud Muse, 1968-1971
Robert Rauschenberg Foundation
The fluidity of Rauschenberg’s aesthetic, another queer tenet, allows him to take these risks at flamboyancy and showmanship. One of the best works in the exhibition hangs next to Pilgrim and features a similar premise: Pantomine (1961) features two fans at the sides of a large canvas, blowing air at the paint. (Rauschenberg once remarked it was to keep the work “fresh and in a constant relation to the atmosphere of the room.”) As a parody of action painting, Rauschenberg risks the presumed integrity of formalist abstraction for the sake of a good joke. He is willing to adulterate the canvas with increasingly caustic, abrasive machines so that he might signal to larger rifts between the quotidian world of objects and the vast nothingness of
Minimalism
.
The idea of encrypting queerness is another vital piece in reconfiguring our idea of the neo-avant-garde. Twombly is the undisputed king of this technique, finding beauty in the nonsense repetitions of painterly gesture. In his later works, that repetition became a scribble, an illegible cursive that perhaps only he can decode. In early works like Tiznit (1953)—created after returning from a trip traveling abroad with Rauschenberg—we see Twombly begin to grapple with this crude sense of visual language and the history of primitive cave paintings. Reciprocally, Rauschenberg continues his investigation into reinterpreting the plane of art’s existence. He creates Erased de Kooning Drawing (1953), which finds its aura in the ambiguousness of a palimpsest—itself now reminiscent of faded cave paintings. 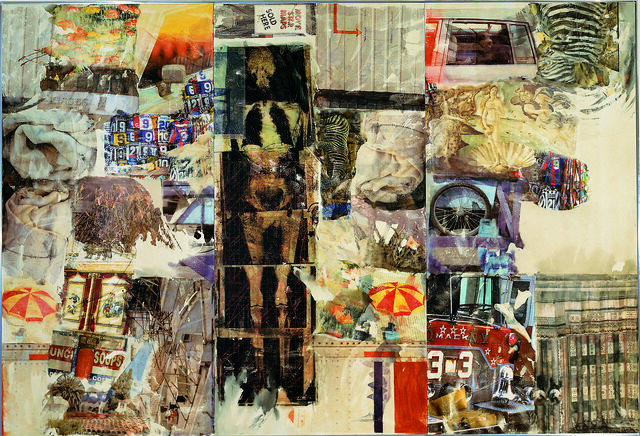 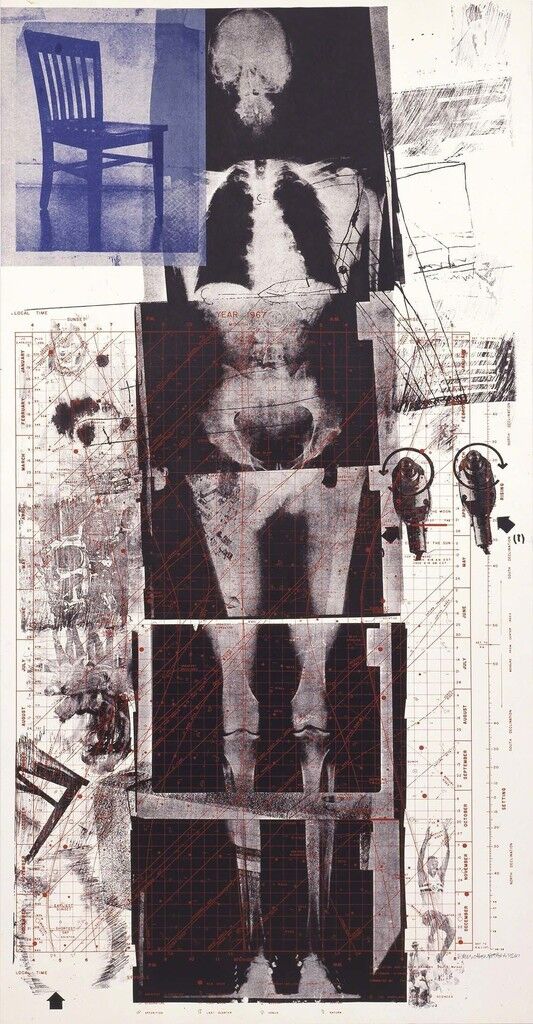 Robert Rauschenberg
Booster, 1967
Robert Rauschenberg Foundation
Turning an eye to his later silkscreen collage works, we see Rauschenberg become “too much”—flaming. He fully embraces a collapse of the personal and the historical, the interior and the exterior, the colorful and the monochromatic. With Mirthday Man [Anagram (A Pun)] (1997), created around the time of his retrospective at the Guggenheim, Rauschenberg began to pull at the fragments of his enormous oeuvre, combining them onto a single surface. At the work’s center is “self-portrait of inner man,” an X-ray of the artist’s body from three decades earlier—which was already used in Booster (1967), which hands nearby at MoMA. Surrounding his skeleton are photographs from previous materials and work. We see zebras, umbrellas, tractors, numbers, and advertisements—even a reproduction of
Botticelli
’s The Birth of Venus.
What do all these symbols mean when combined? What is the artist saying? The familiar path that MoMA follows would dictate a discussion about
Dadaism
and
photomontage
. Like other parts of the well-worn narrative, this point wouldn’t be wrong, per se; it’s just not the whole story. We owe a great deal of refreshed retrospection to Rauschenberg and friends, openly affording them an acknowledgement of their aesthetic queerness as a complement to the accepted tales.
Cover image: Peter Moore, Photograph of Robert Rauschenberg’s Pelican, 1963. Photo © Barbara Moore/Licensed by VAGA, New York, NY. Courtesy of Paula Cooper Gallery, New York. © 2017 Robert Rauschenberg Foundation. Courtesy of the Museum of Modern Art.
Zachary Small
Related Stories