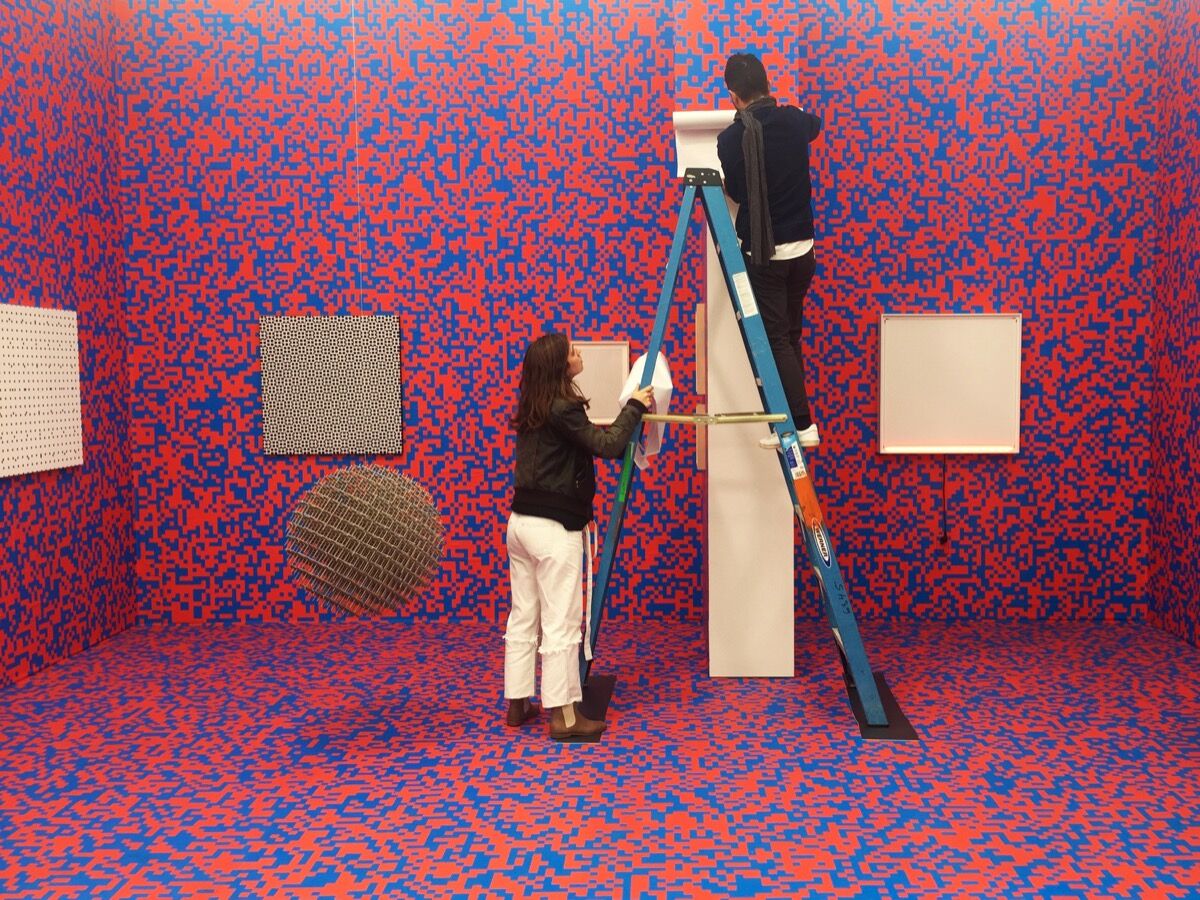 When was the last time you thought about art handlers? The people who ship, install, and store art are often overlooked. Visitors rarely see them—they enter through service entrances, or labor during off-hours—and hard data about the profession is scarce. We don’t know how many art handlers there are, let alone detailed statistical information about their wages.
Despite the lack of empirical statistics, industry advocates—some with decades of art handling under their belts—say there has been a shift in demographics toward whiter and younger art handlers occupying freelance roles. A study of museums receiving city funding in New York, one of the few data points around diversity in the field, found that 73% of technical/production staff (which includes art handlers) at the profiled institutions are white.
Meanwhile, the opportunities for unionized art handling work have decreased. Conversations about greater diversity at the executive and curatorial levels of the art world remain strong, while this blue-collar cohort flies under the radar. Some auction houses and numerous institutions—including New York’s Brooklyn Museum,  Museum of Modern Art, and Metropolitan Museum of Art—have unionized art handlers, but up until a year ago, there were no union contracts with the New York art installation companies that service private clients or supplement in-house institutional labor.
For the first time, a blueprint for those companies is emerging in the form of the “Art Handlers’ Bill of Rights,” developed by the Art Handlers Alliance of New York (AHA-NY). Industry advocates hope the nascent document will be widely adopted and, in the process, protect wages, promote diversity, and help gather labor statistics.

Art Handling with a Retirement Fund

The AHA-NY developed in the summer of 2013 from the Arts & Labor working group, a subset of the Occupy Wall Street movement. The most concrete action of the advocacy group so far has been drafting the Bill of Rights, a framework for certifying businesses that agree to abide by its specifications regarding wages, benefits, and working conditions. (This emulates the model developed by Working Artists and the Greater Economy (W.A.G.E.) in 2008, which set standards for artist fees that have been adopted nationwide.)
When someone drops into an AHA-NY happy hour, they are generally asked how much they make. The range varies wildly—from $10 to $60 an hour for more senior members. To get more concrete data, the AHA-NY also worked with a Murphy Institute economist to develop an art handler survey. (The survey, which takes less than 10 minutes to fill out, would allow art handlers around the city to self-report their wages and working conditions.) As yet, there hasn’t been a push to distribute it.
Eventually, the group settled on $25 an hour as the target minimum wage under its Bill of Rights. And a year ago the group certified its first business owner under the document. But the AHA-NY didn’t have to go out and find her—she came to them. 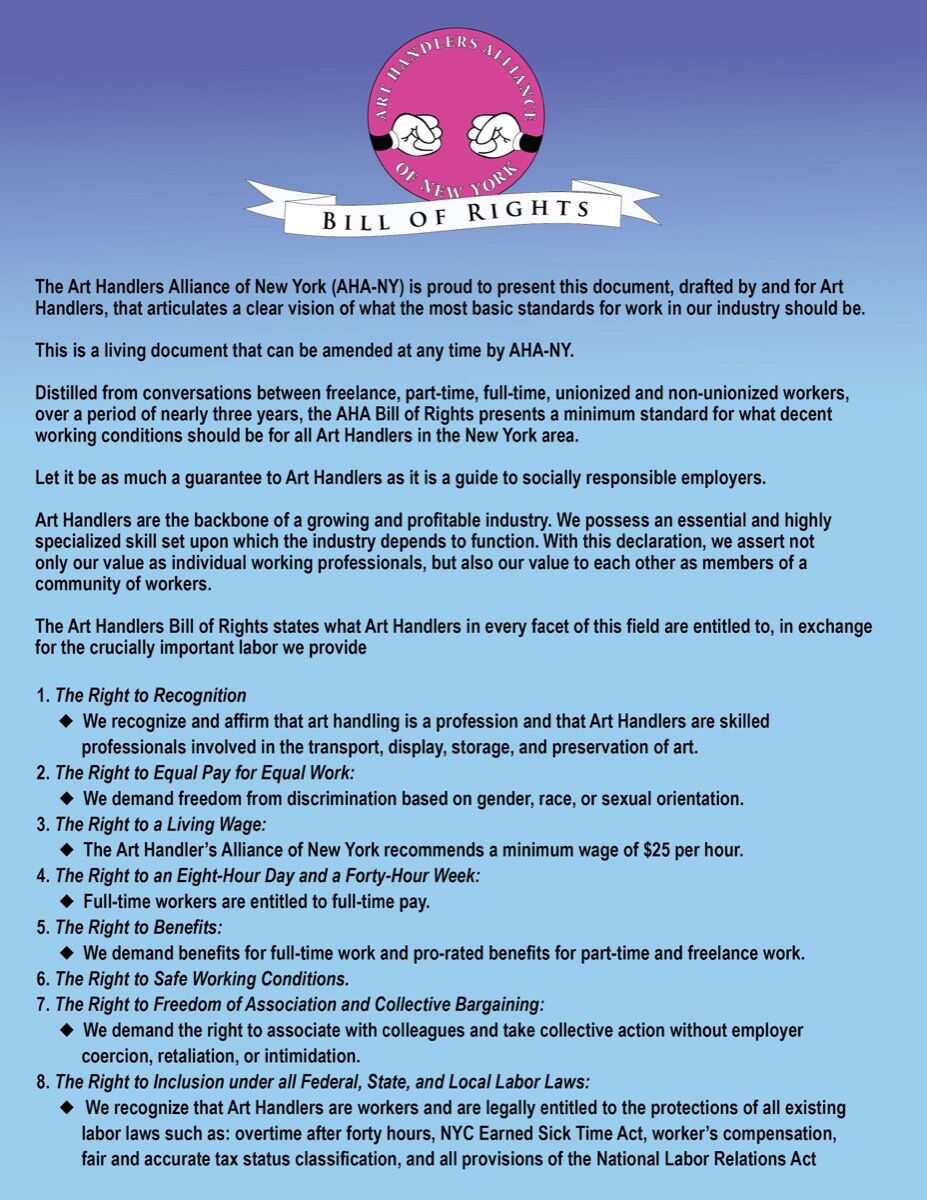 Copy of the Art Handlers’ Alliance of New York’s Bill of Rights. 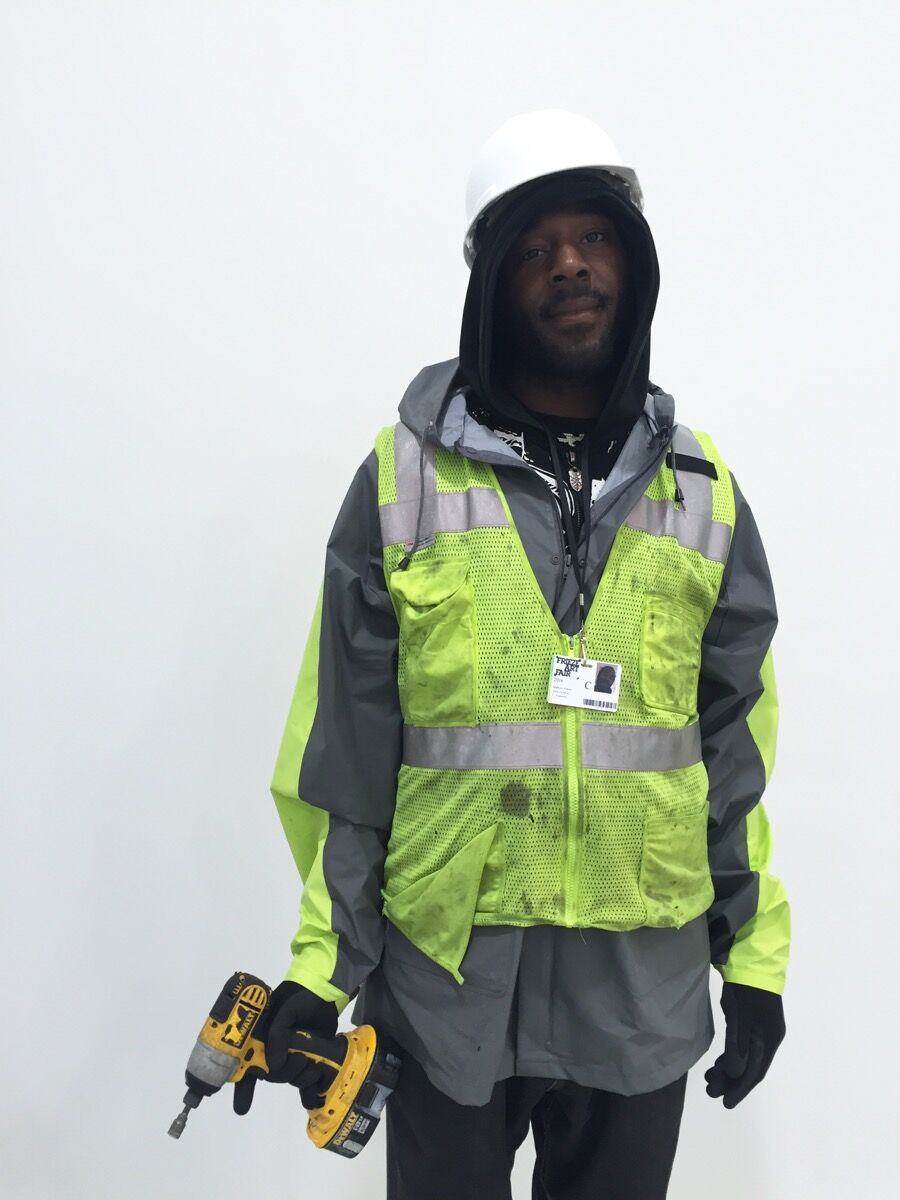 Hazel Molina has worked in interior design for nearly two decades. In 2002, she started Phantom Designs, which offers art consulting and installation. Molina initially subcontracted out the installation part of her business, but her clients—including hospitals and outpatient facilities around the tri-state area—began requesting union labor. Without an art handlers union, Molina initially turned to unionized carpentry workers. However, finding they weren’t trained in the niche skills the job required, she reverted back to hiring freelance art handlers and installers.
The use of nonunion work led to a confrontation with a Teamster at a worksite during a massive project involving 235 pieces of artwork. “It was a very uncomfortable situation, but we got [the job] done,” said Molina. “I walked out of there and thought: This is an opportunity.”
Molina began looking for art handlers that were both unionized and specialized. In May 2016, she reached the Art Handlers Alliance, who let her know about the Bill of Rights and introduced her to Julian Tysh, the political coordinator for Teamsters Local 814, which is traditionally for movers, though it also represents art handlers at Sotheby’s and Christie’s (those auction houses also employ temp handlers not represented by the union).
Molina began negotiating with Local 814. The union’s first contract with a private art installation company took several months to be drafted, with AHA-NY’s Bill of Rights providing a template for the relatively uncharted territory. “It was a guide for them, and it was a guide for me,” said Molina. The parties eventually reached a contract that included the right to overtime pay and pro-rated health benefits for art handlers working part-time.
While assembling her team, Molina interviewed one installer who was commuting to a project in the Hamptons two to three times a week. His travel time was never paid for, and he was making $20 an hour. For a recent project in New Jersey, Molina made sure her team was paid for their commute, as well.
“It was already better than basically any contract that any of us had seen before,” says Stephen Sewell, one of five art handlers hired by Molina after the deal was reached. Also an adjunct professor at Westchester Community College, he previously worked at Sotheby’s as a temporary art handler for eight months before turning freelance in 2014. “For every hour I work with Phantom Designs, [a sum] is placed in an annuity fund for me,” said Sewell. “No one has ever offered me anything resembling retirement as a freelance art handler.” It’s a benefit many in the art world don’t enjoy.

The Intersectionality of Labor

Prior to the Bill of Rights, the most significant recent moments for this section of the labor movement came as art handlers protested Sotheby’s in 2010–11, followed by the subsequent actions around the New York edition of the art fair Frieze in 2014.
During the Sotheby’s lockout, spurred by buyouts and the creation of non-union jobs, art handlers picketed the company and staged creative demonstrations. After reaching an agreement with Sotheby’s, the Teamsters used this momentum to join with a coalition of unions demanding that organized labor be used to construct the venue for Frieze on Randall’s Island.
“I think for a lot of folks, that was the first time they had really seen organized art handlers fighting for something and it raised the level of consciousness in a lot of ways,” says Tysh. 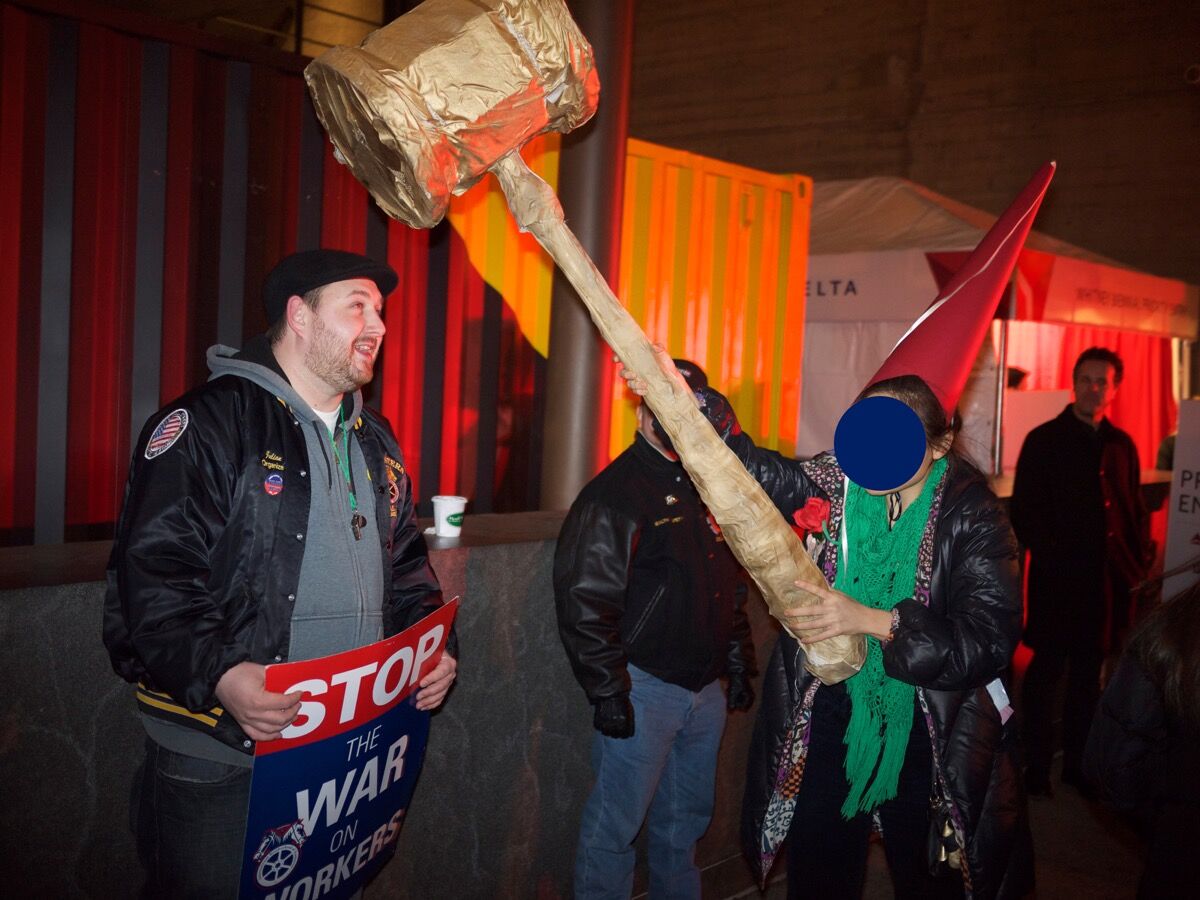 Sotheby’s lockout protest outside of the VIP preview of the 2012 Whitney Biennial. Photo by David Martinez. Courtesy of Arts & Labor.

Advertisement
Such organizational efforts were heartening for the union and its supporters, but the art handling field soon faced other challenges. Since the lockout ended, Tysh said he’s observed that Local 814’s auction house membership itself has become “a little whiter, a little younger, [and] a little ‘millennial-transplant-from-out-of-town.’” While art handling used to be a subset of the broader moving industry, dominated by people of color, today the increasingly specialized field has become the domain of boutique firms.
The New York moving companies that Local 814 represents pivoted to focus on high-end office moving, taking advantage of the city’s commercial real estate boom. “It’s not like the work was just stolen from them by these upstart art handling companies,” says Tysh. “A lot of our companies don’t do that work anymore.” That change, those I spoke with said, left the door open for hiring managers to expect or prefer art handlers with academic backgrounds in art, which tends to skew toward a white demographic.
Why is such background a necessity? “A similar analogy would be if you’re transporting hazardous materials, you don’t necessarily have to have a degree [in chemistry], you just have to understand the guidelines,” says Antonio Serna, who has worked as an art handler and was a member of the Arts & Labor working group. These attitudes can have knock-on effects when it comes to the demographic makeup of art handlers. “I’ve never heard someone say they’re not hiring people of color for gallery work, but systemic racism doesn’t work like that,” said Clynton Lowry, the founder and editor of Art Handler magazine.
“We need to have a more serious approach to the art handling world and also use it as a way to bridge the demographics,” added Tysh, who notes that he plans on increasing efforts to train his union members, the majority of whom are people of color, in art handling.
While there appear to be growing efforts by the city to tie funding to staff diversity, it remains unclear if art handlers will be taken into account. The People’s Cultural Plan, a progressive activist-driven plan for the public arts funding allocated by The New York City Department of Cultural Affairs (DCLA), wants the city to guarantee worker protections for all third-party contractors—whether employed by a public museum, or one that receives DCLA funding, like the New Museum and the Guggenheim. It would also require organizations receiving public funds to take bids from businesses of color.
“I’m not trying to promote the idea of a black art handler over a white handler or a working class guy over the new millennial transplants because there’s room for all of us. That’s the point of the labor movement,” said Tysh, who joined Sotheby’s in 2005 only to see most of his mentors, primarily people of color, grow older and retire or move on to other jobs. “We just need to figure out a way to acknowledge each other and the different levels of privilege that we have.”
There’s hope from advocates that Hazel Molina’s contract and the Bill of Rights could spark change and offer a real blueprint for galleries and others in the field who, unlike Molina, may not be dealing with clients who require union labor. “Other people in the industry, they want to do better,” said Lowry.  “I think gallery owners would prefer to create a better working environment for their art handlers.” 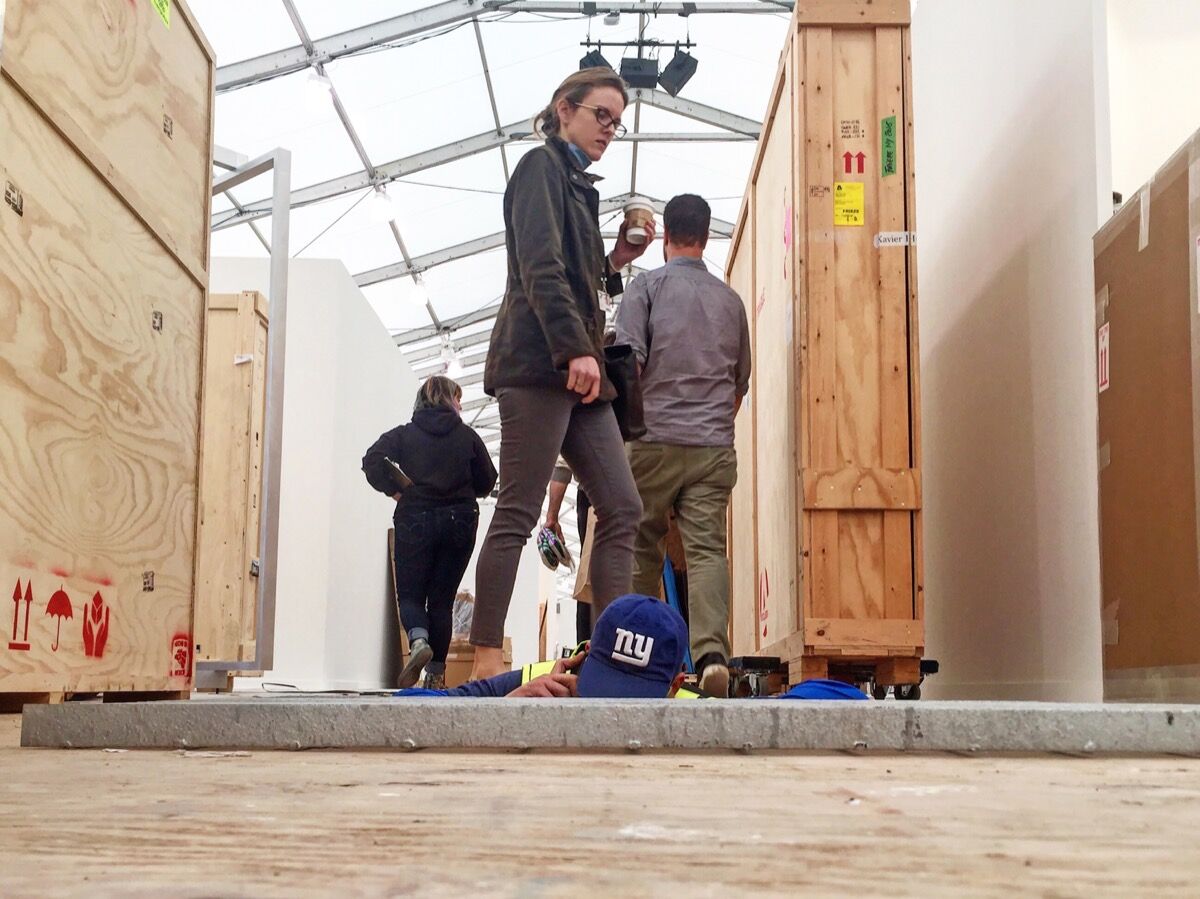 In the first-ever issue of Art Handler, Shane Caffrey compares the role of handlers to Downton Abbey. This characterization is corroborated by the five art handlers spoken with for this story. One AHA-NY member says, “Clients often ask you to put on slip-on booties to cover your shoes, while they’re still wearing their own—as if they were carried into their apartment by their driver, never touching the dirty streets of New York.” Each art handler I spoke to has stories of “rude and condescending” treatment while on the job. Molina has heard similar stories from the art handlers she hired, but, she said, “I would never allow anyone to talk down to my guys.”
Developing a contract with the union, the first using the Art Handlers’ Bill of Rights as a template, wasn’t easy, but Molina said it has brought her new jobs and opportunities through businesses that prefer working with union labor. She is humble about piloting a more equitable model for art handlers’ rights. “I had a problem and I came up with a solution,” she says. “My next thing is to hire a woman installer. I have a few candidates; it’s bound to happen.”
Daisy Alioto
Related Stories