Hasegawa Tōhaku’s legacy has played out like an art-historical whodunit—which is precisely why Dr. Miyeko Murase, former special consultant in Japanese art at the Metropolitan Museum of Art and professor emerita at Columbia University, found it so fascinating. “I thought, this reads like a detective story,” she told Artsy, “and I like detective stories.”
This 16th-century Japanese artist has long been an enigmatic figure. Despite his renown—a series of his painted folding screens, now in the collection of the Tokyo National Museum, ranks among the country’s most famous works—little is known about his early life, where he trained, or how he rose from obscurity to such prominence in the Momoyama period. In 1964, the former director of the Kyoto National Museum, Tsugiyoshi Doi, made a bold claim: that Tōhaku, a leading artist of his age, and Hasegawa Nobuharu, a rural painter of Buddhist icons, were actually one and the same.
The hitch, Murase said, was that Nobuharu’s oeuvre contained no gilded screens. This particular medium, a Tōhaku signature, would have clearly connected the two bodies of work.

In 2009, almost a half-century after Doi published his research, that “missing link” finally came to light. Flowers and Birds of Spring and Summer (ca. 1580), an exuberant polychrome and gold-leaf screen, was attributed to Nobuharu. Like all Japanese screens, it is meant to be viewed from right to left: A crab apple tree that sports the delicate pink flowers of springtime comes first, followed by summer wisteria vines that wrap around a twisted old pine tree. In the background, a plunging waterfall peeks through honey-colored clouds, while dandelions, violets, and red azaleas bloom below.
This sumptuous work is the centerpiece of “A Giant Leap: The Transformation of Hasegawa Tōhaku,” currently on view at the Japan Society in New York. Although the artist is well-known in Japan—particularly following the Tokyo National Museum’s 400th anniversary retrospective in 2010, which also included Flowers and Birds of Spring and Summer—this is the first Tōhaku exhibition to show in the United States. It’s rare for any of his art to travel, both because of its scarcity and because some of his work in Kyoto is painted on permanent room dividers.
Co-curated by Murase and professor Masatomo Kawai, the New York exhibition traces the artist’s personal reinvention. “The show is so small, it’s not quite possible to do a chronological step-by-step presentation,” Murase said. “But I am trying to treat this screen as a kind of bridge between Nobuharu and Tōhaku, between Nobuharu’s Buddhist painted icons to secular subject matter.” 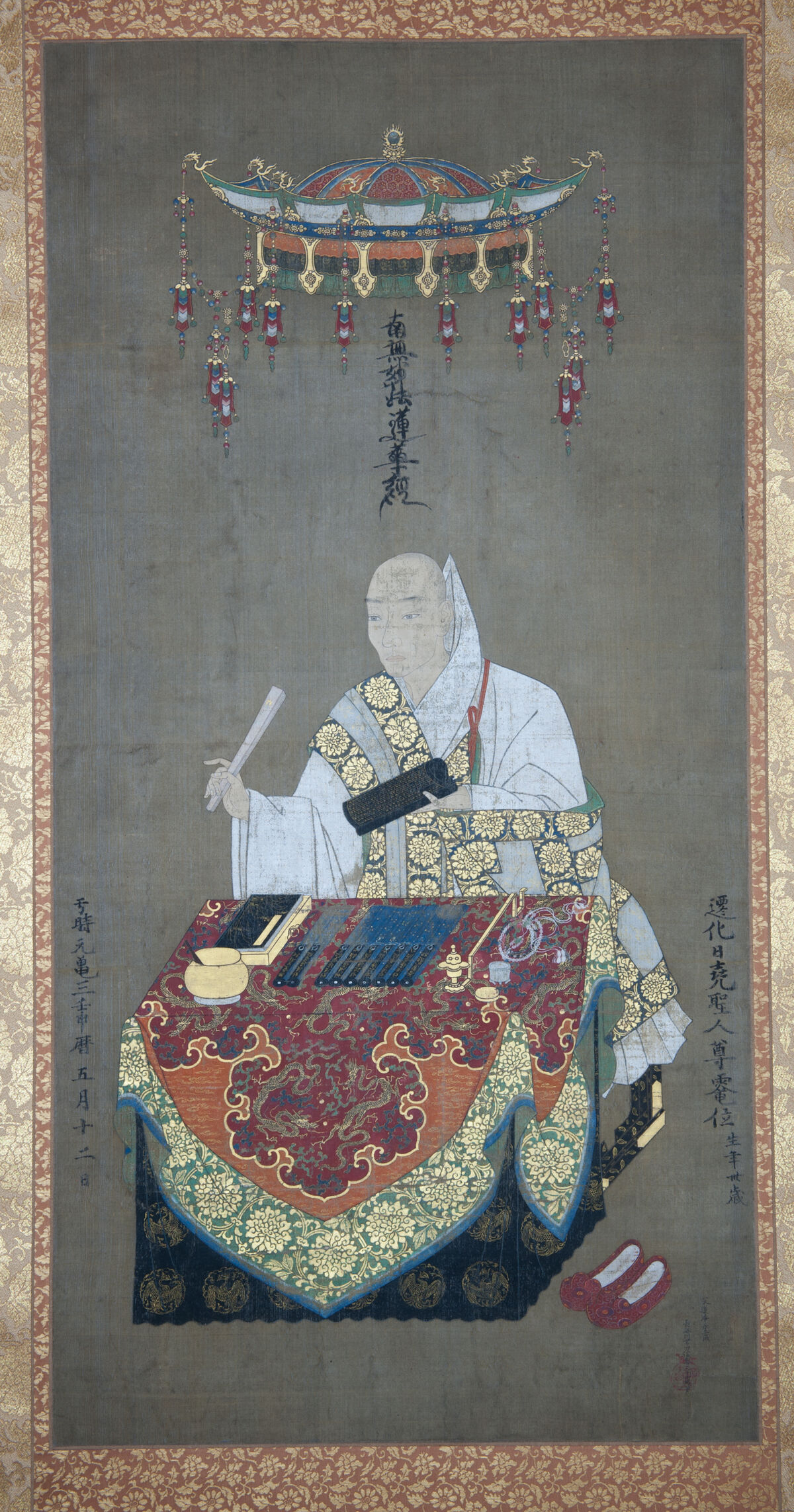 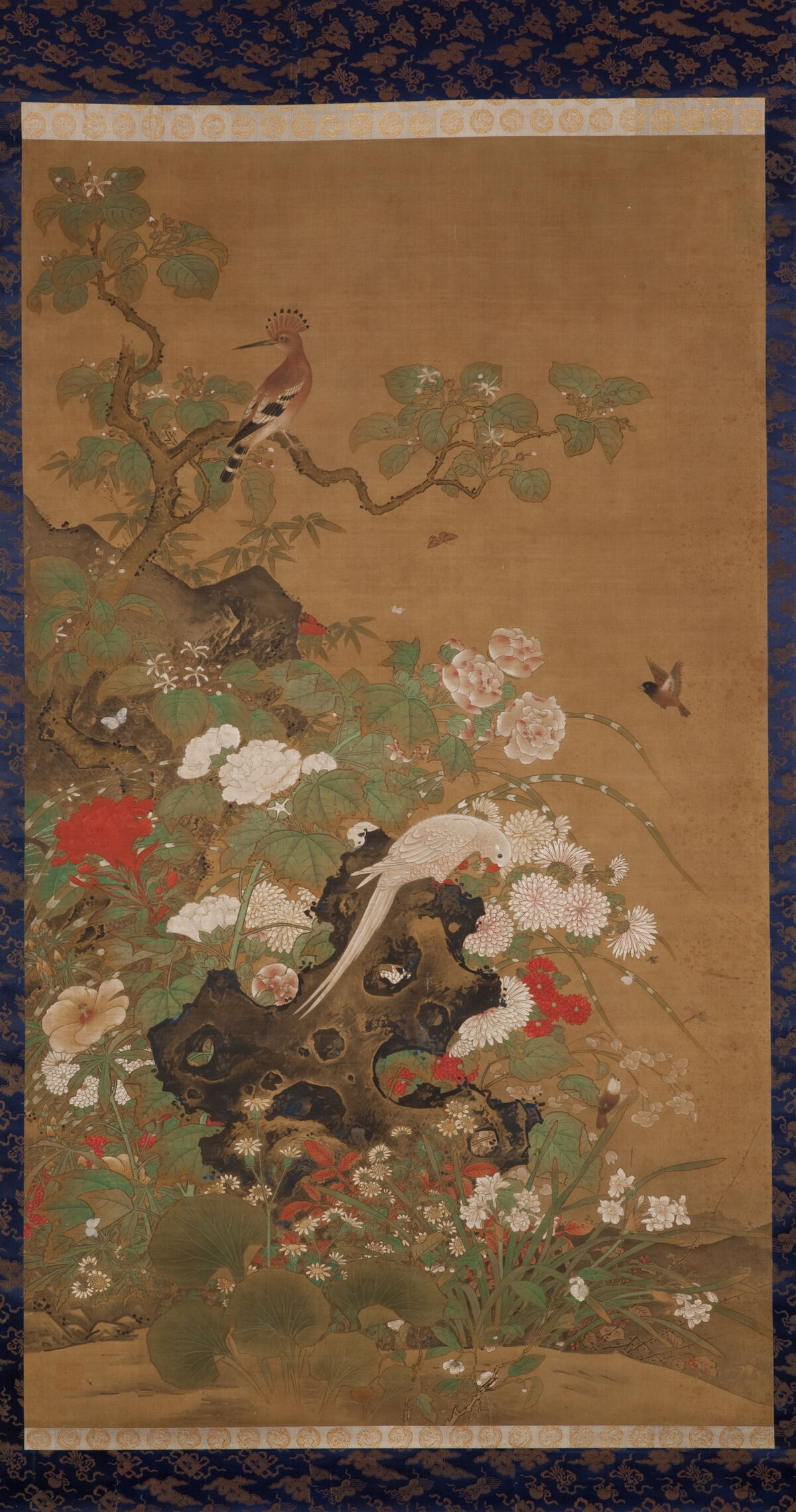 Advertisement
Nobuharu was born in 1539 in the coastal village of Nanao, where he got his start painting portraits and sacred art for local temples. Despite limited resources and a family of ordinary standing, the provincial artist was always ambitious. He regularly signed his name elaborately, including both his age and a sack-shaped seal. “The whole history of Buddhist art in Japan from the 7th century to the 16th century—almost a thousand years—we don’t know of any Buddhist painters putting their names [on icons],” Murase noted, adding that the practice may have been seen as audacious or even sacrilegious.
In the exhibition catalogue, Murase relates an example of Nobuharu’s tenacity: According to Sangen’in temple records, when the artist asked the abbot if he could paint the main room’s sliding panels, the religious man responded that it was a space “for Buddha, and therefore should be left undecorated.” As soon as the abbot left for a business trip, however, Nobuharu went ahead and painted each one of the 36 panels.
How he graduated from this steady, decorative temple work into the highest echelons of secular art is the question answered by “A Giant Leap.” In one gallery, four works chart his acquisition of skills and techniques. Portrait of Nawa Nagatoshi, a hanging scroll that features an equestrian scene, evolves into a large-scale composition in the later six-panel folding screens Horses at Pasture. A pair of elegant hanging scrolls called Flowers and Birds of Four Seasons—considered a Tōhaku copy of a Ming-dynasty work—adds context for the influence of Chinese art in his work.

But it’s the newly identified screen that offers an essential link between early examples of Tōhaku’s artistic talent to his later mastery of a complicated technical skill. “It requires a special technique to paint on gilded surface—it’s slippery—so he learned that at some point on his way, or when he arrived, in Kyoto” around 1571–72, Murase said.
Flowers and Birds of Spring and Summer has neither signature nor seal, but distinct stylistic choices helped identify the gilded screen as a Nobuharu-Tōhaku piece, such as the wisteria-draped pine tree stretching its sparse branches in two directions. This motif also appears in Tōhaku’s Horses at Pasture screens. “That tree with vines is a rather strange one,” Murase said. “Nobody else does that.” Still, she cautioned, “the question of authorship is not settled. But I’m hoping that eventually it will be approved by Japanese scholars.”
Tōhaku’s newfound skills, combined with his dogged nature, helped him emerge as Japan’s leading painter following the death of the artist
Kano Eitoku
in 1590. It was not unusual for Japanese people in this era to adopt new names; woodblock printmaker
Katsushika Hokusai
, creator of the iconic Great Wave (ca. 1830–32), changed his name more than 30 times. Sometime around 1589, the year Nobuharu turned 50, he was reinvented as Tōhaku.

This was a thriving time for artists, thanks to the shifting military rulers of the late 16th century, who poured money into constructing lavish castles and palaces that expressed their power. However, many of these buildings (and the art within) were destroyed when the warlords fell. Since Tōhaku’s work appeared in a number of Kyoto’s Zen temples—in addition to personal palaces—more of his art has survived than Eitoku’s.
“There must exist many more polychrome and gilded screens, still unidentified, which eventually will be recognized as the work of Tōhaku,” Murase notes in the exhibition catalogue. She notes that it’s unlikely he would have been commissioned to paint Flowers and Birds of Spring and Summer if he had not already proved his talent with other screens. And so, centuries after Tōhaku’s death in 1610, the mystery of his art continues to unravel.
Allison Meier
Related Stories