Why Art History Is Full of People Taking Baths 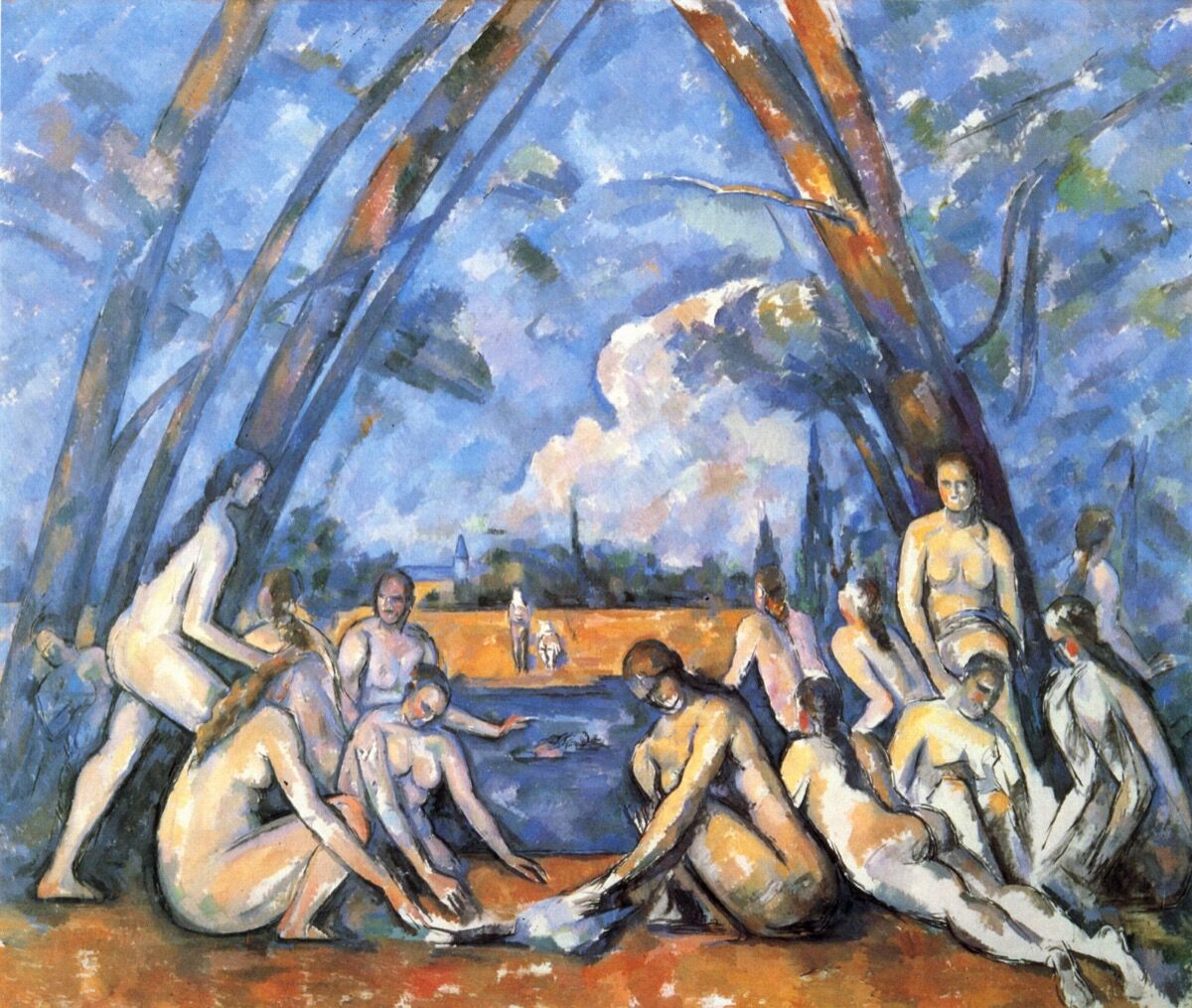 Paul Cézanne, The Large Bathers, 1900–06. Courtesy of the Philadelphia Museum of Art.

The figure of the bather is one of the most common visual tropes in Western art history. From ancient Athens to 1920s Paris and beyond, painters and sculptors have presented bathing in a variety of ways with myriad different aims, whether instructional, titillating, or allegorical.
Even today, the tradition continues to exert an imaginative hold on artists working beyond the frontiers of traditional, figurative representation. One such is the Hong Kong-born, Brooklyn-based artist
Paul Chan
, whose new exhibition “Odysseus and the Bathers,” commissioned by Neon, has recently opened at Athens’s Museum of Cycladic Art. Though its theme may be an ancient one, its preoccupations are nothing if not contemporary.
Upon entering, you are confronted by a transparent, seated figure bowing its torso up and down, as its legs knock together in rhythm with the rise and fall of its chest. Though its headless “body” is nothing more than an expertly tailored nylon sack and its artificial “breathing” apparatus—a fan system joined up by thick cables strewn spaghetti-like across the floor—is left pointedly unconcealed, something about this sculpture is uncannily human. Its movements are uncomfortable; neurotic, even: It’s like glimpsing a stranger on the brink of an emotional breakdown. 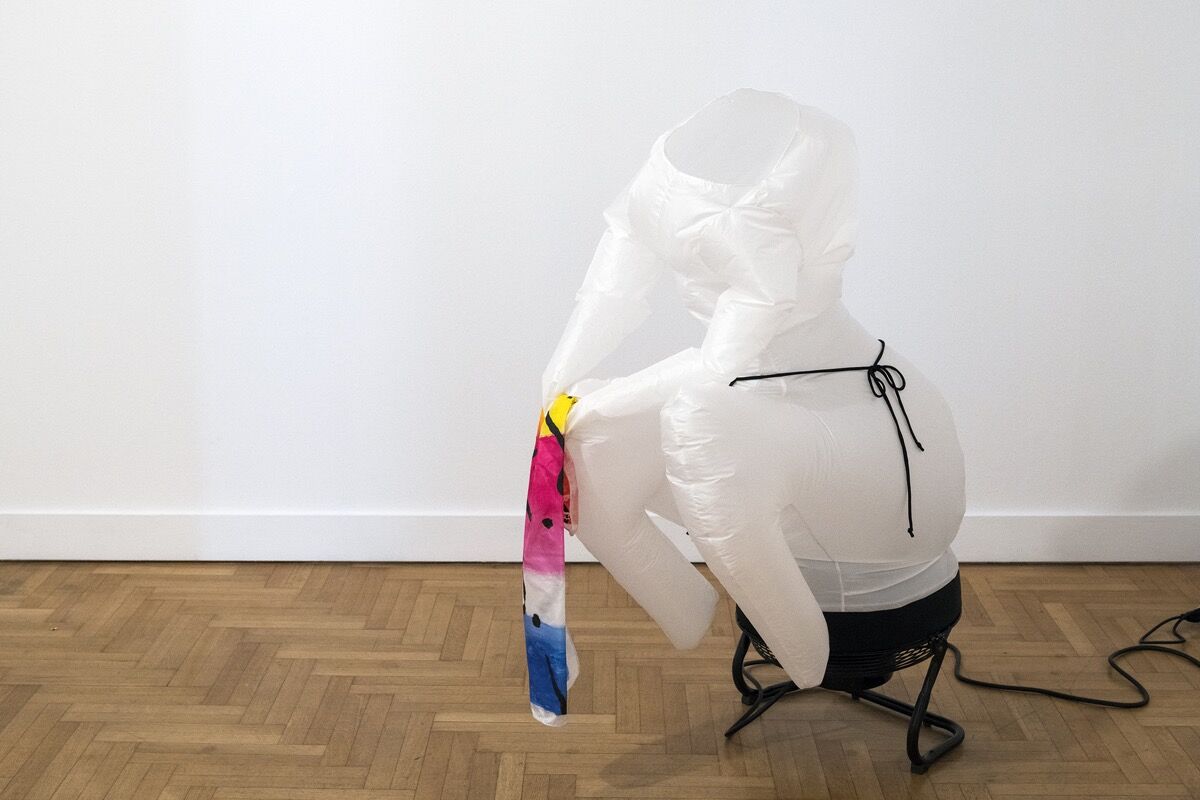 Installation view of Paul Chan, La Baigneur 9 (Polypelope), for “Odysseus and the Bathers” at the Museum of Cycladic Art, Athens, Greece, 2018. Photo © Panos Kokkinias. Courtesy of the artist and Greene Naftali, New York.

This flailing figure is meant to represent Penelope (the wife of Odysseus). Furthering the Homeric associations, the other “bathers” loosely stand in for Telemachus, Penelope’s son, and a trio of the suitors who unsuccessfully attempted to woo her during her husband’s 20-year absence from his kingdom. A figure based on Odysseus himself appears in the form of a yellow, phallic column of billowing fabric encased in a cabinet, while Telemachus is rendered as a jet-black figure bent over at the waist (“as though [he] was having an asthma attack,” said Chan). The suitors, fashioned from primary-colored nylon, form a triangle around a patch of green carpet—a composition that makes a conscious nod to
Henri Matisse
’s The Dance (1909).
Nevertheless, the tone of the show is distinctly less exuberant than that reference might suggest. Chan has approached his subject from a modern and not wholly celebratory point of view, acknowledging that the association we have with the figure of the bather today is a very different proposition from what it might have been historically.
“Some of the most affecting images of bathers that I’ve seen recently are photographs of beachgoers holidaying as refugees wash up on shore,” he said. “I wanted to renew the art historical tradition for the 21st century.” This, of course, is no small ambition—because, as we’ll see, the subject is one of the richest, most diverse—and, indeed, problematic—in cultural history. 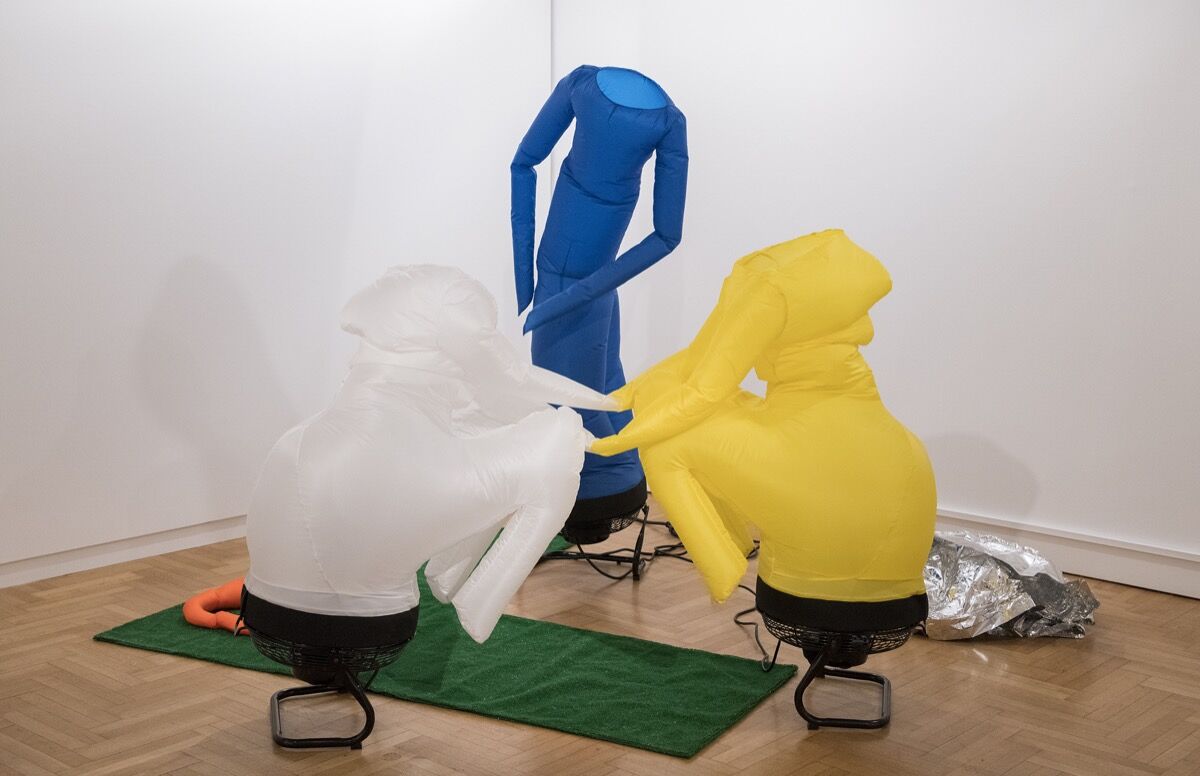 Installation view of Paul Chan, Les Baigneurs (suitors as fugees as suitors), for “Odysseus and the Bathers” at the Museum of Cycladic Art, Athens, Greece, 2018. Photo © Panos Kokkinias. Courtesy of the artist and Greene Naftali, New York.

Advertisement
Even for the wealthy, personal hygiene hasn’t always been a priority. One of the first facts British schoolchildren learn in history class is that Queen Elizabeth I bathed only once a month, preferring to mask her bodily odors with perfume. Yet in the ancient world, bathing was seen as an important ritual. Archaeological finds on the island of Crete dating as far back as the 2nd millennium B.C. have uncovered special chambers devoted to washing, and bathing was a common subject for the vivid style of vase painting that still provides our most telling record of day-to-day life in ancient Greece. As attested by the public baths that were a feature of towns across the Roman Empire, bathing culture would only become further institutionalized as the importance of the Greek city-states waned.
The focus on cleanliness in the mythology and literature of Greece and Rome reflects its significance. Homer, for example, repeatedly has Odysseus bathing, while Agamemnon is murdered in the bath on his return from Troy. Later, the 1st-century A.D. poet Ovid recounted the tale of Actaeon and Diana in his Metamorphoses, in the process creating one of the most horrifically brutal stories in the literary canon. Actaeon, a hunter, is stalking out his prey when he stumbles on the goddess Diana taking a bath in the woods in the company of her retinue of nymphs. Appalled, she transforms him into a deer; robbed of his ability to speak, Actaeon is unable to stop his blood-crazed hounds from ripping his body to shreds. 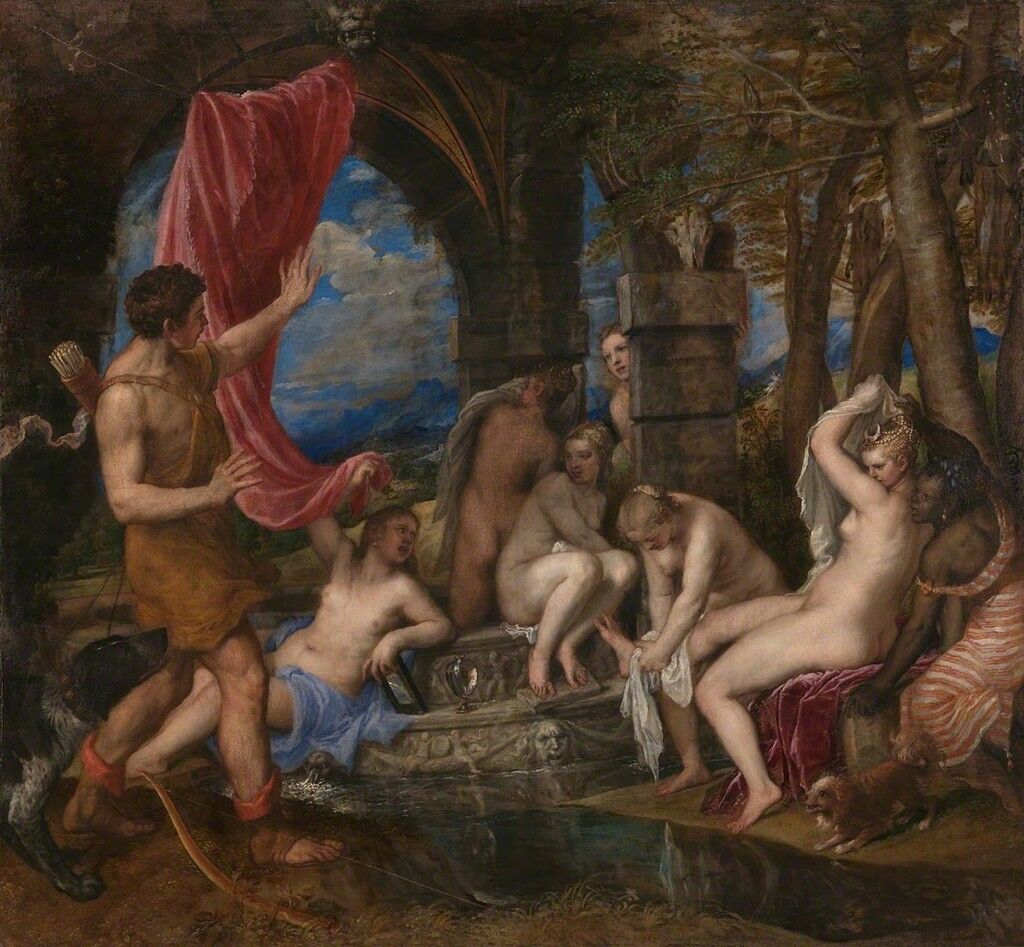 Titian
Diana and Actaeon, 1556-1559
"George Shaw: My Back to Nature" at National Gallery, London
The story was taken up as a subject by many artists of the
Renaissance
, perhaps most notably
Titian
. Now at London’s National Gallery, his interpretation of the story (from 1556–59) depicts Actaeon at the moment of his hapless discovery, just as he pulls away a curtain to expose the nude goddess’s modesty. The similarly naked nymphs recoil in horror as a small dog yaps and Diana furiously averts her gaze. Actaeon, meanwhile, stands petrified: Clearly, he has some idea of the trouble he’s in.
Bathing scenes were common throughout Renaissance and
Baroque
art.
Michelangelo
’s almost totally lost cartoon The Battle of Cascina (1504) had naked Florentine soldiers roused from washing in the river by the approach of the enemy, while
Georges De La Tour
’s Woman Catching a Flea (ca. 1638) gave a notably intimate view of its subject cleansing herself. And in one of his greatest paintings, from 1654,
Rembrandt
depicted Bathsheba resigning herself to the moral dilemma presented to her by the covetous King David, who spied on her as she bathed; you can’t help but wonder whether we are watching from his voyeuristic point of view.
In 18th- and 19th-century France, painters like
François Boucher
,
J.A.D. Ingres
, and
Eugène
Delacroix
cast off the classical and biblical associations of the bathing scene and began to use it as a means of presenting the nude in a more naturalistic way. As the century progressed, however, running water became an increasingly ubiquitous feature in bourgeois homes, a sign of modernity that chimed with the birth pangs of modern art. The bather in painting—so often depicted en plein air before, dipping in ponds or streams—retreated indoors, taking on a whole new character.
Edgar Degas
’s scenes of women washing themselves articulate how bathing, presented as a communal activity since ancient times, was now an almost exclusively private ritual. That he was present to observe his models as they bathed provides a layer of complexity to his studied realism. 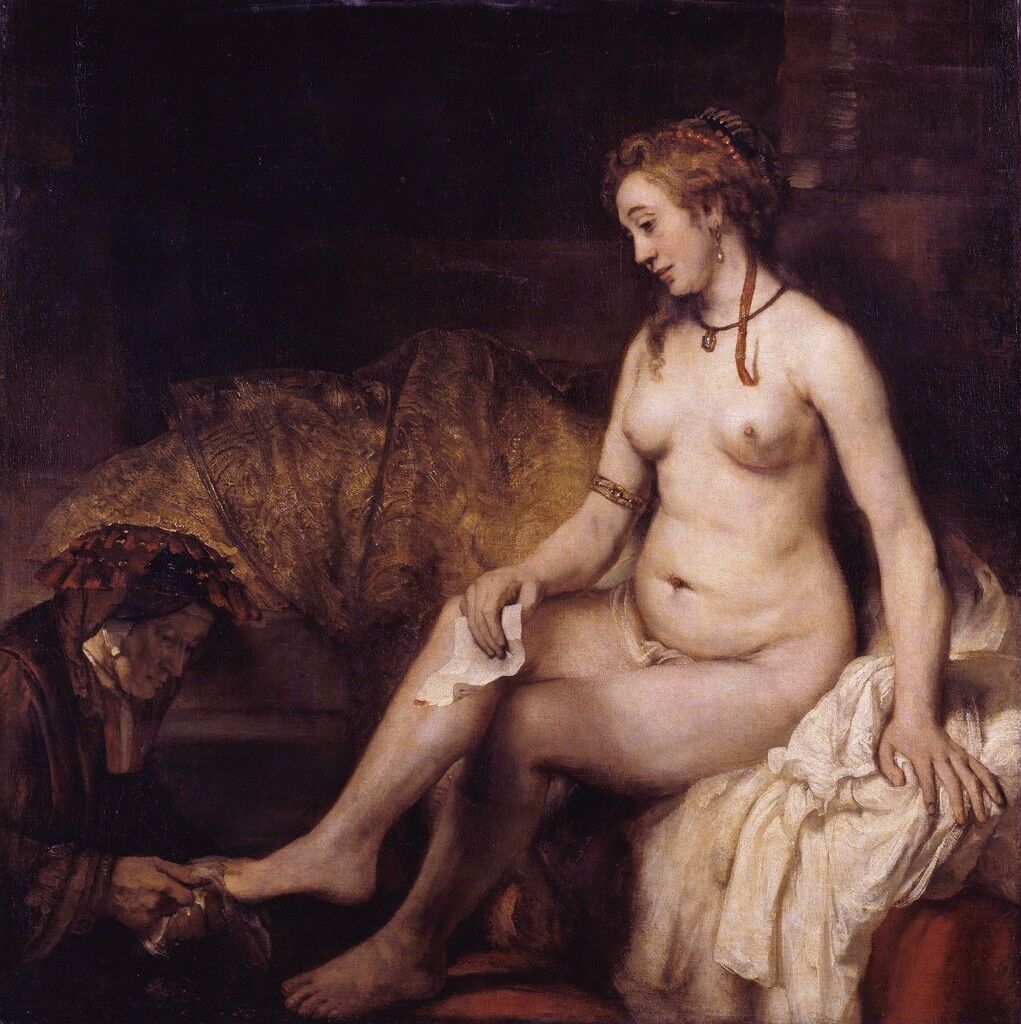 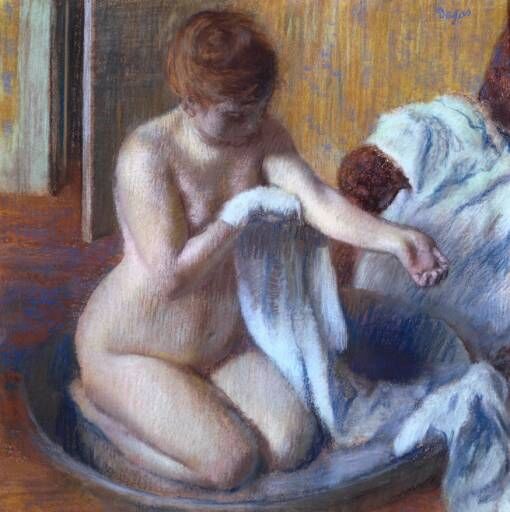 Degas was not the only modern painter interested in the bathing scene. Artists including
Georges Seurat
,
Pierre-Auguste Renoir
,
Paul Cézanne
, and
Paul Gauguin
appropriated the classical trope and used it to showcase both a new way of seeing and a different form of natural and physical beauty. Seurat’s Bathers at Asnières (1884), for example, presented a scene that, from a distance, appeared timeless: a group of bathers in various states of undress lounging by a picturesque river bank. Moving closer, however, the scene reveals itself to be altogether more contemporary: On the horizon, factories in the industrial Parisian suburb of Clichy belch smoke into the air, while the technique of the paintwork itself is an electric tangle of broad brushstrokes and fast crosshatching.
By the 1920s, the bather had become one of the most common motifs in modern art. Matisse,
Georges Braque
,
Pablo Picasso
,
Pierre Bonnard
, and
Jean Metzinger
all took on the old trope and plunged it into the 20th century.
Cubism
took the familiar figure of the bathing woman and deconstructed, rearranged, and refracted her back as if the scene were unfolding through the reflection in a mirrored disco ball.
Surrealism
would go even further, with
Salvador Dalí
and
Joan Miró
respectively transforming their subjects into hunks of meat and arachnid-like colossi. 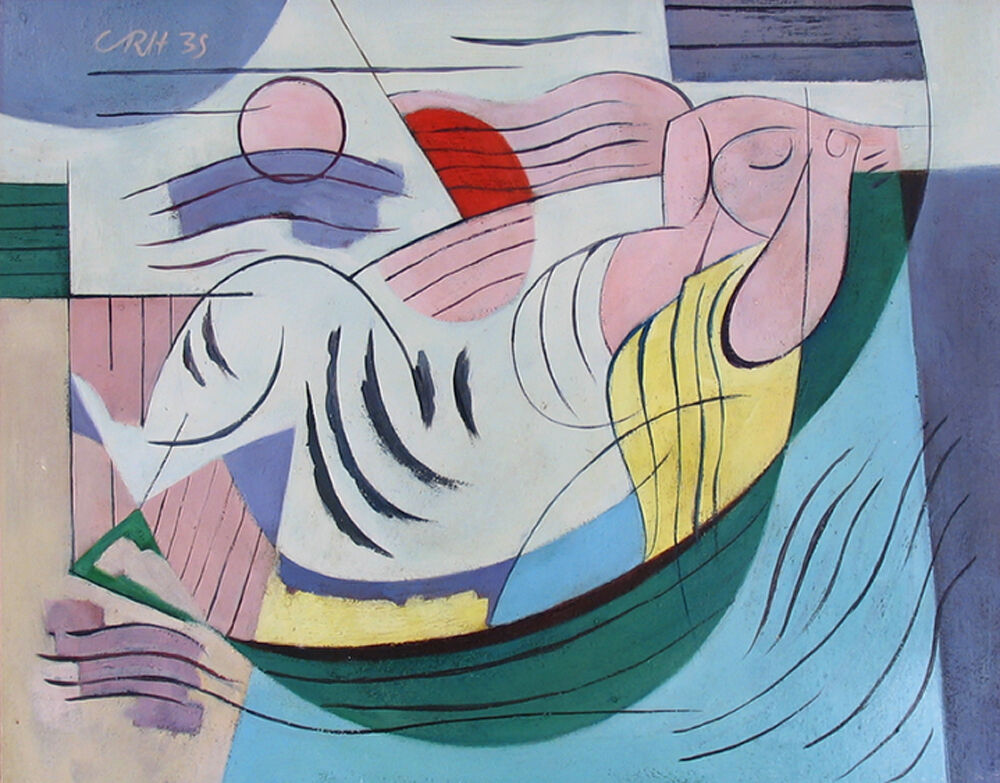 Carl Holty
Female Bather by the Sea, 1935
Caldwell Gallery Hudson
There is, of course, a less-than-progressive aspect to all this. Though the modern artists’ take on the bather was partially concerned with the making of the image itself, their efforts take on a new weight when seen from a feminist perspective. While there are some notable male bathing scenes (Picasso’s Les Baigneurs, 1921–22, springs to mind), the subjects of these paintings are overwhelmingly female. Understood in this light, even the most timeless of these images can be read as exercises in objectifying their subjects, reducing them to characters playing the role of sexualized props. Many of these works, you could argue, make voyeurs of both the artist, and—more worryingly—of the viewer, too.
What the goddess Diana would have made of Picasso, Gauguin, or Matisse intruding on her privacy, we can only imagine. For his part, Chan looks at the supposedly voyeuristic qualities of the bathing figure from a nuanced position. From his point of view, there is something pleasurable and celebratory about the trope—and in what can only be described as a troubling moment in world history, straightforward pleasure and celebration are things we cannot be allowed to dismiss as frivolous. “I wanted to enter the tradition of the bather,” he said, simply. “It’s a theme that encompasses sexuality, the human body, what attracts us, and changing attitudes towards that.” The visual tradition as Chan sees it also prompts some truly existential concerns. “There are real questions here: what it is to be human; what our relationship to nature is—if, that is, nature can be said to exist anymore,” he said. But there is hope here, too: “Perhaps by reinvigorating certain themes, we can, in fact, reinvigorate ourselves.”
Digby Warde-Aldam
Related Stories