Rachel Lebowitz
Apr 16, 2018 6:37pm
Unicorns had a moment in the 1980s and early ’90s, and once again they’re making something of a comeback, appearing on everything from Starbucks Frappuccinos to makeup products, and even toast. Theories link the trend to its aptness for social media, as well as to our current political climate, with unicorns providing a good dose of levity and fantasy in what are, for many, troubling times.
But the history of the unicorn began well before Lisa Frank school supplies, My Little Pony toys, or Harry Potter. The unicorn is predominantly a Western phenomenon, though it finds an Asian counterpart in the kirin, a similar creature (but one that often has two horns). Around 398 B.C., the Greek physician Ctesias described an animal whose single horn possessed curative powers, and nearly 500 years later, Pliny the Elder wrote of a hybrid creature that thwarted all attempts to capture it. (These accounts were thought by some later scholars to have been based on European encounters with the Indian rhinoceros.)
Later, in the Middle Ages, the unicorn was known in European folklore as a diminutive yet ferocious attacker that was also a symbol of virginity and a stand-in for Jesus Christ, one that could only be tamed by a female virgin.
While the existence of unicorns was discredited by the end of the 16th century, the creature had already secured a cultural stronghold in artistic depictions that continues through today. The following eight works of art, from medieval tapestries to contemporary sculpture, lay claim to some of the most memorable depictions of unicorns in art history.

Martin Schongauer
, The Mystic Hunt of the Unicorn, 1489 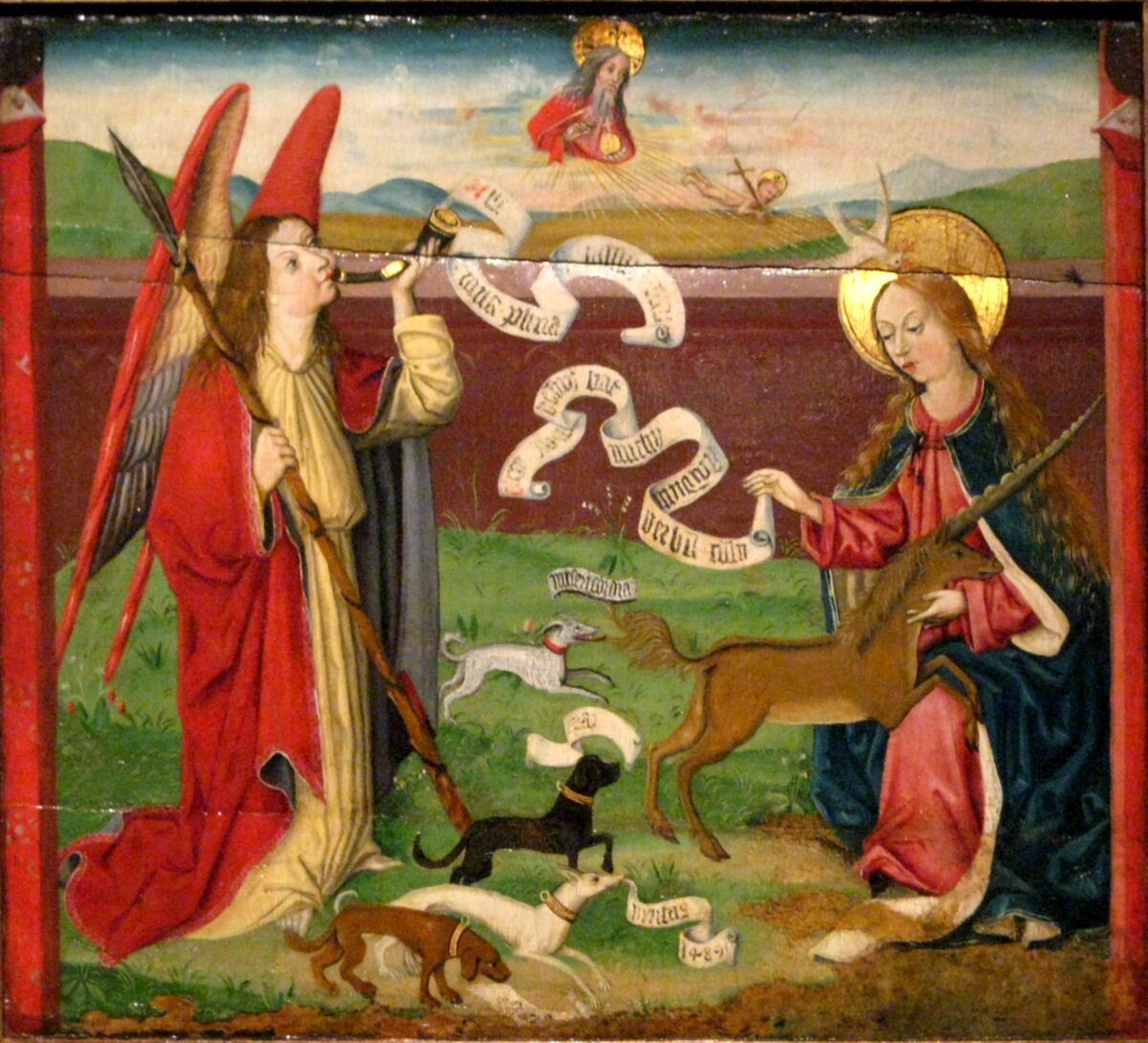 Martin Schongauer, The Mystic Hunt of the Unicorn, 1489. Courtesy of the Pushkin Museum of Fine Arts, Moscow, via Wikimedia Commons.

Famed German artist Martin Schongauer’s 1489 oil piece belongs to a lineage of Annunciation paintings, in which the angel Gabriel visits the Virgin Mary and reveals that she is carrying the child of God. In a twist on the genre, Schongauer inserted the then-popular imagery of a unicorn hunt into the Christian scene, depicting Gabriel as the hunter, accompanied by hounds that stand for the Christian virtues of justice, truth, mercy, and peace.
In Schongauer’s sumptuous work, the unicorn perches, docile, on Mary’s bent knee as she caresses its neck, invoking the belief that the fierce animal could only be subdued by a virgin, whom the hunters customarily used as bait. Schongauer’s coupling of these two genres also works to strengthen the unicorn’s longstanding allegorical association with Christ. This symbolism was established as early as the 2nd century A.D. through medieval bestiaries like the Physiologus, which paired descriptions of animals with biblical quotations and morally instructive fables. 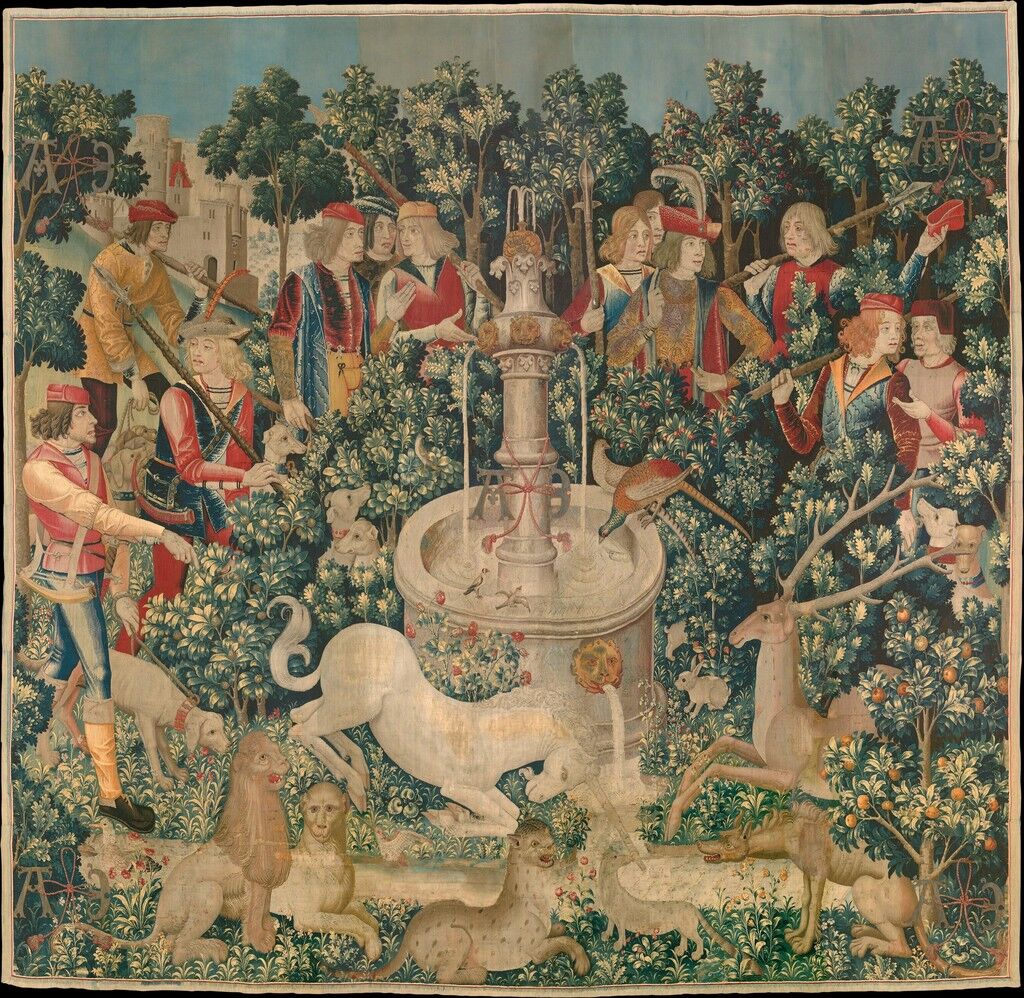 Unknown Netherlandish
The Unicorn is Found (from the Unicorn Tapestries), 1495–1505
The Metropolitan Museum of Art
Advertisement
Arguably the prized jewel of the the Met Cloisters (the Metropolitan Museum of Art’s medieval arm in upper Manhattan), the seven “Unicorn Tapestries” (1495–1505) are commandingly beautiful, with richly dyed wool and glistening silver- and gold-wrapped silk threading. They are also large, claiming an entire room to themselves. More tantalizing still is the fact that many details about their creation remain a mystery. (The enigmatic “AE” monogram that appears on each tapestry may be the key to their provenance.)
The compositions display an unfolding narrative in which a group of noblemen, hunters, and dogs pursues, captures (with the help of a virgin), and kills a unicorn in the woods. The scenes may have been intended to serve as an allegory for the crucifixion narrative, but it’s also possible that they refer to a marriage. The final scene, The Unicorn in Captivity, hints toward the latter, as the unicorn is miraculously unscathed, peacefully enclosed by a fence and tied by a gold chain to a pomegranate tree—suggesting the trappings of matrimony. (Some scholars believe that this tapestry was created as a stand-alone work, however.)
Whatever their origins, the tapestries represent a stunning example of the millefleurs (“a thousand flowers”) design that flourished in Europe in the 15th and 16th centuries. Another brilliant example of this design is The Lady and the Unicorn (c. 1500), a set of six tapestries that were designed in France and executed in Flanders. Often compared to
Leonardo da Vinci
’s Mona Lisa (1503–06) for their renown and their own mysterious provenance, these tapestries depict a young woman with a unicorn and a lion in scenes thought to reference courtly love and desire, as well as each of the five senses. They have hung in Paris’s Musée de Cluny since the 1880s, but they are currently making a rare cameo at the Art Gallery of New South Wales in Australia through June 24th of this year. 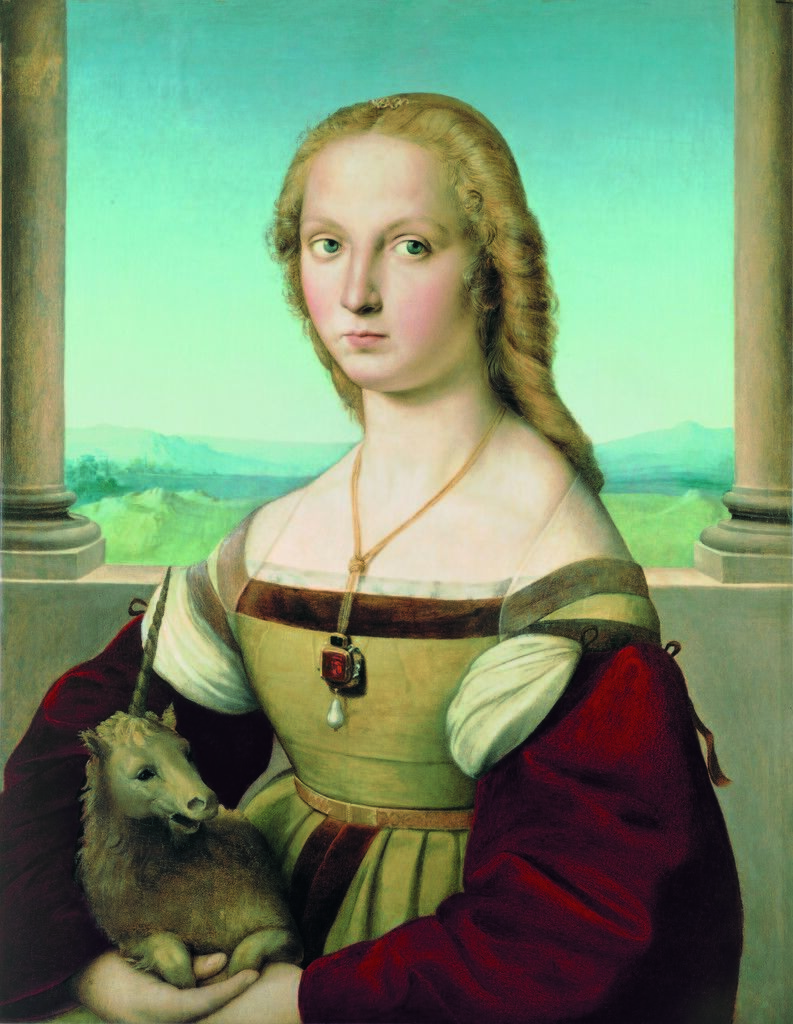 Raphael
Portrait of a Lady with a Unicorn, ca. 1505
Legion of Honor
With the sitter’s ambiguous expression and familiar poise, it’s clear why some art historians believe this portrait by Italian Renaissance master Raphael was inspired by the Mona Lisa. As with Leonardo’s subject, the identity of Raphael’s captivating blonde, blue-eyed Lady is uncertain, but the painting was most likely commissioned for a wedding; in the late 1950s, X-rays revealed that a lap dog had originally been painted where the unicorn now sits. While the lap dog was a symbol of fidelity commonly associated with marriage, the unicorn represented virginity or chastity. Scholars disagree on whether Raphael’s substitution indicates that the betrothal fell apart or simply announces the young woman’s purity. The unicorn may also point to the woman’s powers of beguilement, as only a virgin could entrap the animal. Just as the sitter holds the legs of the unicorn, so too has she successfully ensnared her mate.

Albrecht Dürer
, Abduction on a Unicorn, 1516 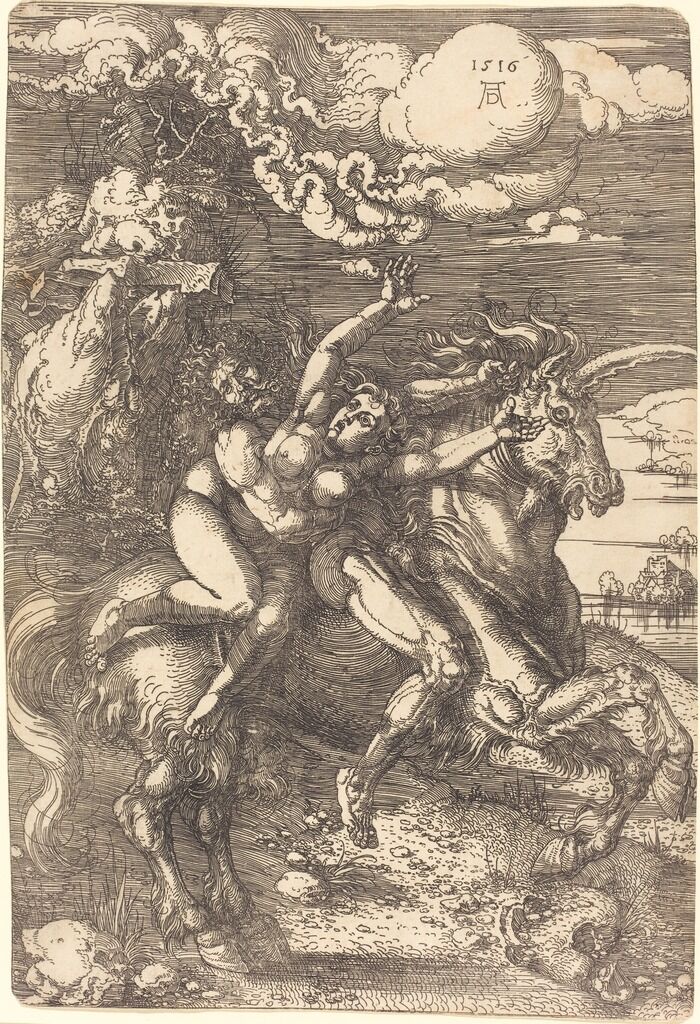 Albrecht Dürer
Abduction on a Unicorn, 1516
National Gallery of Art, Washington D.C.
Known primarily for his woodcuts and engravings, Albrecht Dürer also created six etchings, experimenting with iron plates instead of traditional copper ones. As one of those half dozen pieces, Abduction on a Unicorn (1516) illustrates Dürer’s mastery of his medium. The male and female figures, he with his impressively detailed musculature and she the voluptuous counterpart, are splayed dramatically at the foreground, while the background displays Dürer’s controlled use of linear perspective. The scene is likely a reference to the Greek myth in which Pluto, god of the underworld, abducts the goddess Proserpine to make her his bride, and several institutions decisively refer to the work as Abduction of Proserpine or Abduction of Proserpine on a Unicorn. While the myth traditionally includes a horse-drawn chariot, Dürer envisioned a unicorn as Pluto’s steed. Here, rather than representing a stand-in for female purity, the unicorn is depicted as a crazed beast, much like Pluto himself. In this incarnation, the unicorn recalls early descriptions like that of Pliny the Elder, who wrote of a powerful animal that combined the physical traits of a horse, an elephant, and a wild boar. 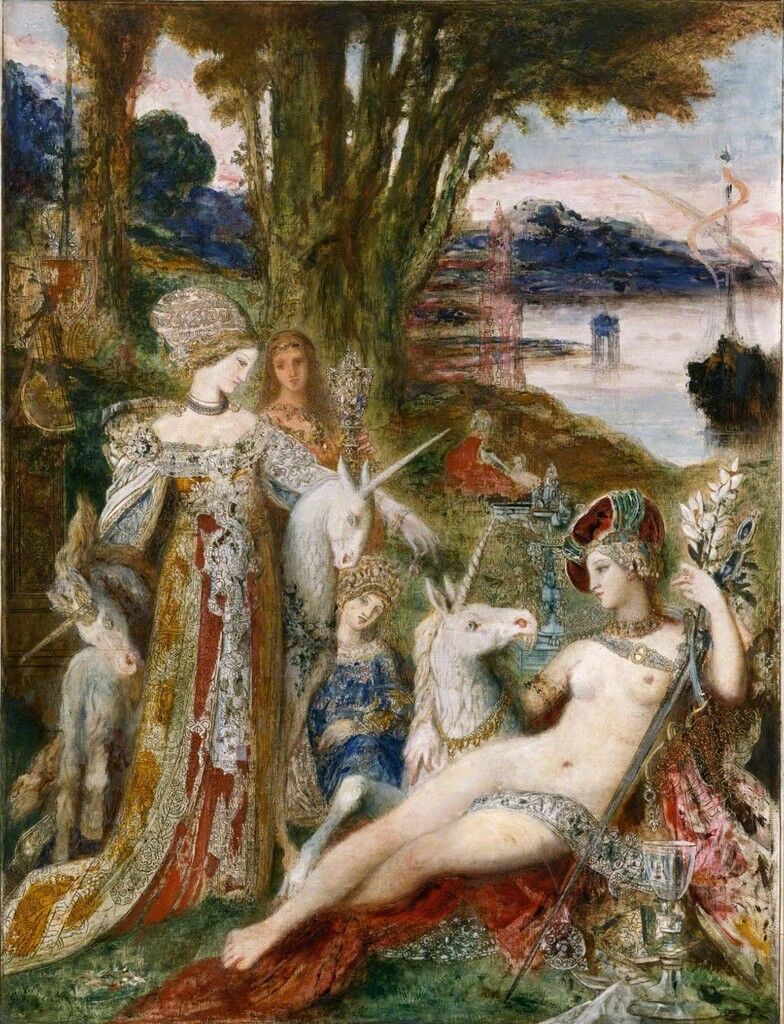 Gustave Moreau
Les Licornes (The Unicorns), Undated
Musée Gustave Moreau
Depicting biblical and mythological subjects in opulent settings, Gustave Moreau created rich works that exemplify
Symbolism
’s interest in narratives that evoke emotions such as fear or desire. In Les Licornes (The Unicorns) (c. 1887), Moreau presents a scene in which three unicorns nestle around the princesses who seem to have tamed them. The lily that one of the women holds connotes purity, while the unicorns’ calm demeanor suggests they have succumbed to the power of virginal maidens. The figures lounge in the lush greenery of what Moreau described as a magical island with an all-female population, evoking Themyscira, the fictional land that Wonder Woman and her cohort of warrior women inhabit. The women’s decadence—they wear jewelry, velvet draperies, and flowing dresses in shades of gold, red, and silver—extends to the unicorns’ neckpieces, and the scene is reminiscent of royal portraiture, with the unicorns standing in for courtly pets. The oil-on-canvas painting is based on the French Lady and the Unicorn tapestries, which pair a noblewoman and a unicorn in a similarly tree-lined setting. Betye Saar, To Catch a Unicorn, 1960. Courtesy of the artist and Roberts Projects, Los Angeles, California.

Along with artists like
Melvin Edwards
and
Charles White
, Los Angeles-born artist Betye Saar helped create the vibrant
Black Arts Movement
on the West Coast beginning in the 1960s. This burgeoning artistic community emerged alongside the Civil Rights and Black Power movements, and called for an art form that could advance the African American cause. Saar’s etching from 1960—made in the early years of her career—alludes to elements of spirituality and the cosmos that appear in her later work, but it also references the period’s racial landscape. While the stylized scene is set in a familiar forest setting, it departs markedly from the Eurocentric lineage of unicorn images. A nude black woman leans against a unicorn, the curves of her body contrasting with the animal’s long, thin neck and angular limbs. Above them are the moon and the sun, perhaps a nod to the passing of time. The moon is also associated with femininity in many cultures, and Saar here celebrates and honors female power. 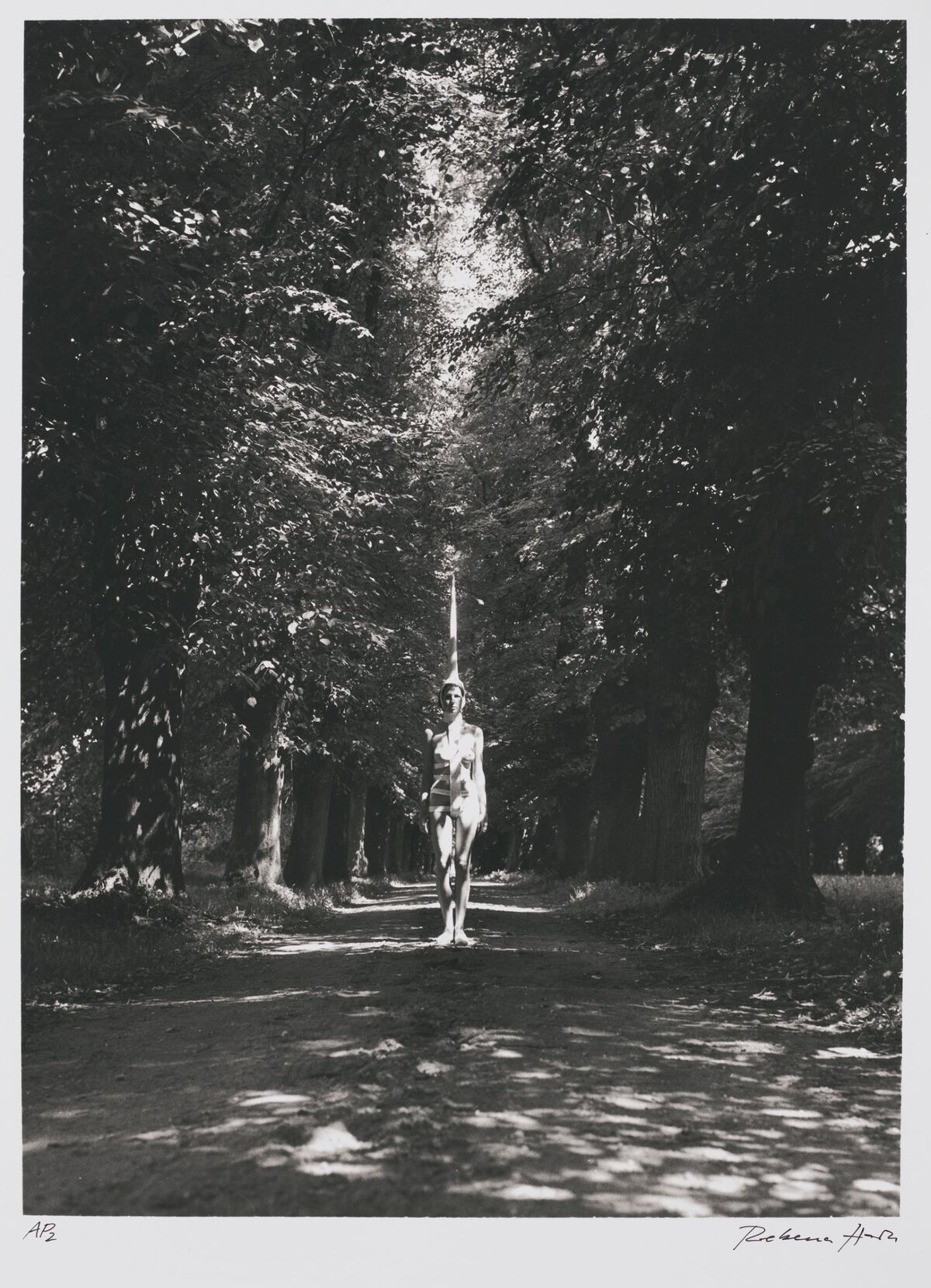 Inspired by Franz Kafka’s strange literary scenarios and the
Surrealist
films of Luis Buñuel, German performance and installation artist Rebecca Horn proposes alternative realities through “body-extending” sculptures like Unicorn (1970–72). Horn created the piece for a classmate of hers from art school in Hamburg. Under the artist’s direction, the woman donned the horn and connected bodice—and nothing else—while walking through a forest and fields in a videotaped performance. Horn has stated that she associated her tall, graceful classmate with a unicorn. As the orchestrator of the work, Horn takes on the role of the young woman who has tamed the unicorn, while the performer herself also invites associations with the virginal maiden. Transforming its wearer into a mythical creature, but only superficially, the piece also engages with Horn’s overarching interest in the limited control we have over our bodies. Leading
Young British Artist
Damien Hirst’s provocative oeuvre probes the nature of art itself. In 1991, he sparked controversy with his The Physical Impossibility of Death in the Mind of Someone Living, a massive tiger shark floating in formaldehyde and encased in glass and steel. The piece was the first of several similar experiments for Hirst over the following decades. The Dream (2008), for one, follows the same animal-in-formaldehyde formula but substitutes a foal for the shark. Emerging from the foal’s forehead is a long white horn that turns the animal into a unicorn. Unlike the shark, this pseudo-unicorn is non-threatening, especially when considered as a symbol of innocence and, today, associated largely with children and make-believe. Conflating reality with fantasy, the piece complicates Hirst’s recurring interest in presenting unapologetic images of death.
Rachel Lebowitz
Related Stories