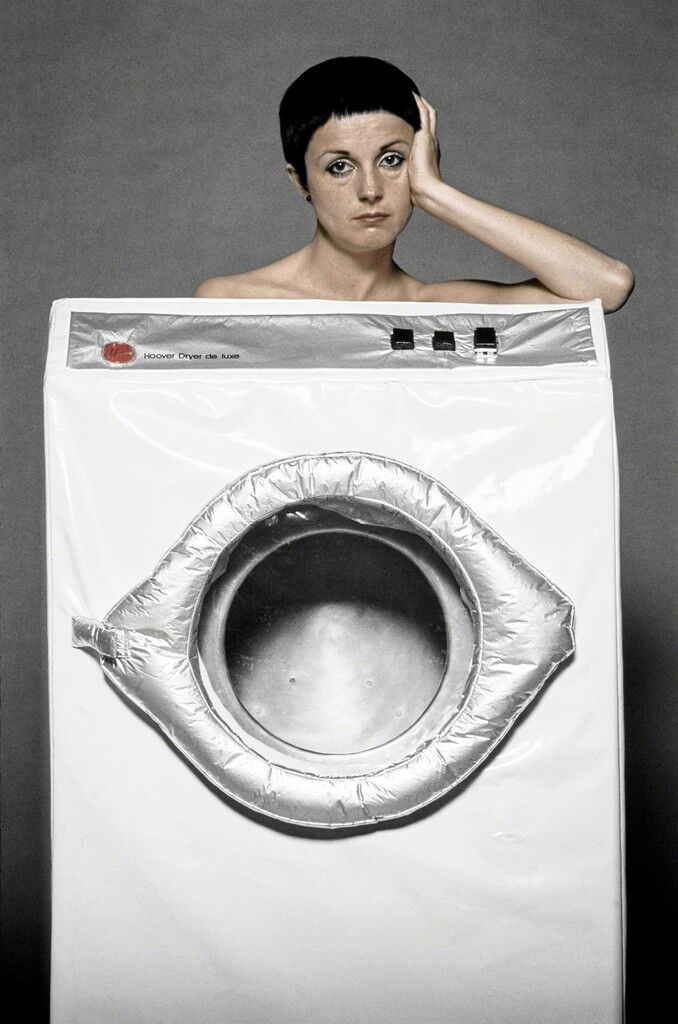 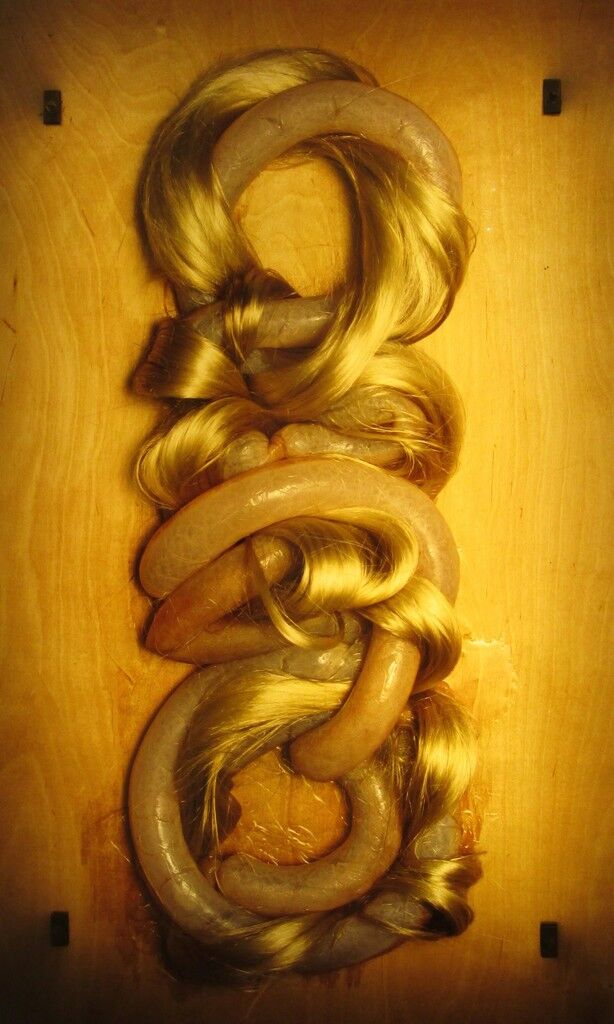 Helen Chadwick
Loop my loop, 1991
Richard Saltoun
When she wasn’t giving interviews, the artist
Mary Kelly
spent the better part of Frieze’s VIP day in the Pippy Houldsworth booth in the fair’s special section, “Social Work,” observing how women and men reacted to her framed images of texts alongside silkscreens of a crumpled black leather jacket and a black leather handbag—a meditation on the onset of middle age, female camaraderie, and the complex relationship between a woman’s appearance and her inner self.
“Men come in and they go out; women come in and they get deeply into it,” Kelly said, wearing a buttery black leather jacket, accompanied by an elegant black woven-leather handbag of the Bottega Veneta variety. Her look was reminiscent of the items documented in her work, Interim Part I: Corpus (1984–85), part of a special section devoted to eight female artists who were making politically and socially charged work in the 1980s.
Kelly’s calm bemusement in the eye of a market storm should come as no surprise, given the steady uptick in her prices and the growing demand from museums and collectors for her work. (The work in the booth is priced around $1 million for the full 30-part installation; dealer Pippy Houldsworth said she would like to sell it as one piece and has so far had “a lot of serious interest.”) But Kelly’s observation—men recoiling; women diving in—points to one explanation for the persistent gender gap in commercial representation and sale prices, despite heightened awareness of female artists’ work and achievements. 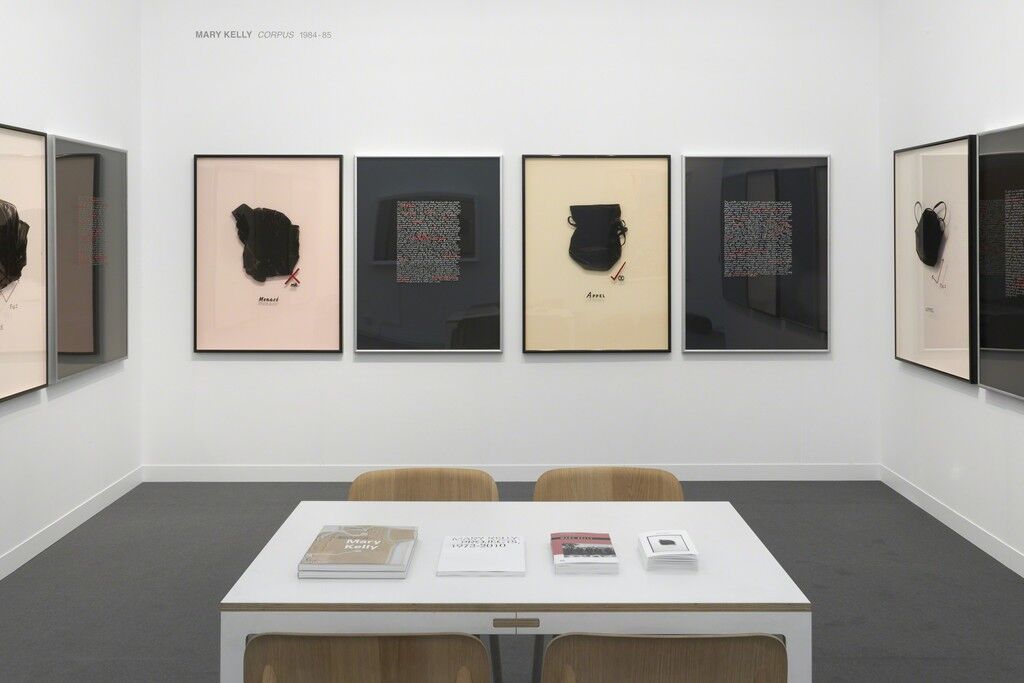 For decades, powerful male gatekeepers kept women at the margins of the art market, a dynamic that is slowly shifting. The African-American artist
Faith Ringgold
, also featured in “Social Work,” told an interviewer earlier this year that the visual arts industry is “more sexist than racist.” A 2017 Artsy analysis of the 199 dealers showing at Art Basel in Miami Beach found that female dealers represent, on average, 28% more female artists. Richard Saltoun, who represents the estate of
Helen Chadwick
, another “Social Work” participant, guessed that art by women sells for one-tenth of the prices for work by their male counterparts. (Also consider that across the broader labor market, women in the U.K. earn on average 81.6% of what men do; the figures for the U.S. are similar, with female full-time workers earning around 80% of men’s wages.)
But exclusion and discrimination are not the only reasons women have historically been less visible in the art market, said Jo Stella-Sawicka, the artistic director of Frieze.
“It might have to do with family life, with caring for parents, with the fact that artist is an uncertain role,” she said, adding that “many women find teaching is a great refuge.” Some artists in the show, such as Tina Keane and Kelly herself, had careers that unfolded in institutional and academic arenas, at a remove from commercial galleries.
Taken together, the women celebrated in “Social Work” illustrate a range of career trajectories—some forged through battles with the status quo, others carved through alternative grooves. Very often, these women created opportunities for, and found support from, other women. But despite being shown together at Frieze, the contours of these women’s career paths have led to a wide range of market outcomes. 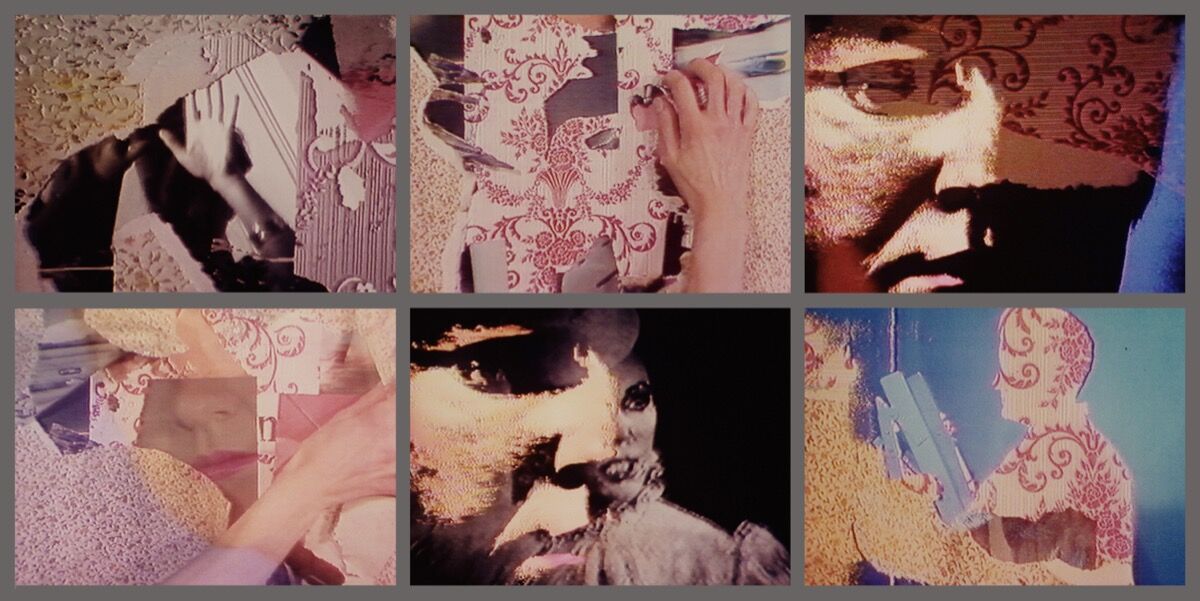 Advertisement
Some actively eschewed the market, Stella-Sawicka said, citing Whitechapel Gallery director Iwona Blazwick, one of ten women on the section’s selection panel, who observed that many female artists in this generation “defined themselves precisely in resistance to what the market was, because their work had no correlations to what the market was at the time. Their work came out on buttons, posters, those types of things—it was absolutely ephemeral.”
Take Tina Keane, who is represented by London’s England & Co Gallery. A performance and multimedia artist, she rarely produced items to be sold, instead supporting herself through teaching at Central Saint Martins College of Art (where she taught the photographer
Isaac Julien
, according to Jane England, her dealer), and grants from the Arts Council England. This helped her produce works such as the films Faded Wallpaper (1988), acquired by Tate and also available at Frieze for £15,000, one of an edition of seven plus an artist’s proof; and In Our Hands, Greenham, Protect Our Babies (1982–84), stills from which were on sale at Frieze, ranging from £2,200 for a recently produced edition to £3,000 for vintage ones.
“Because she wasn’t part of the art market, she didn’t make things to be sold, so therefore, there isn’t a studio of work to be sold,” said Jane England. “Everything is really archivally based; we’re working with her canon of work.” 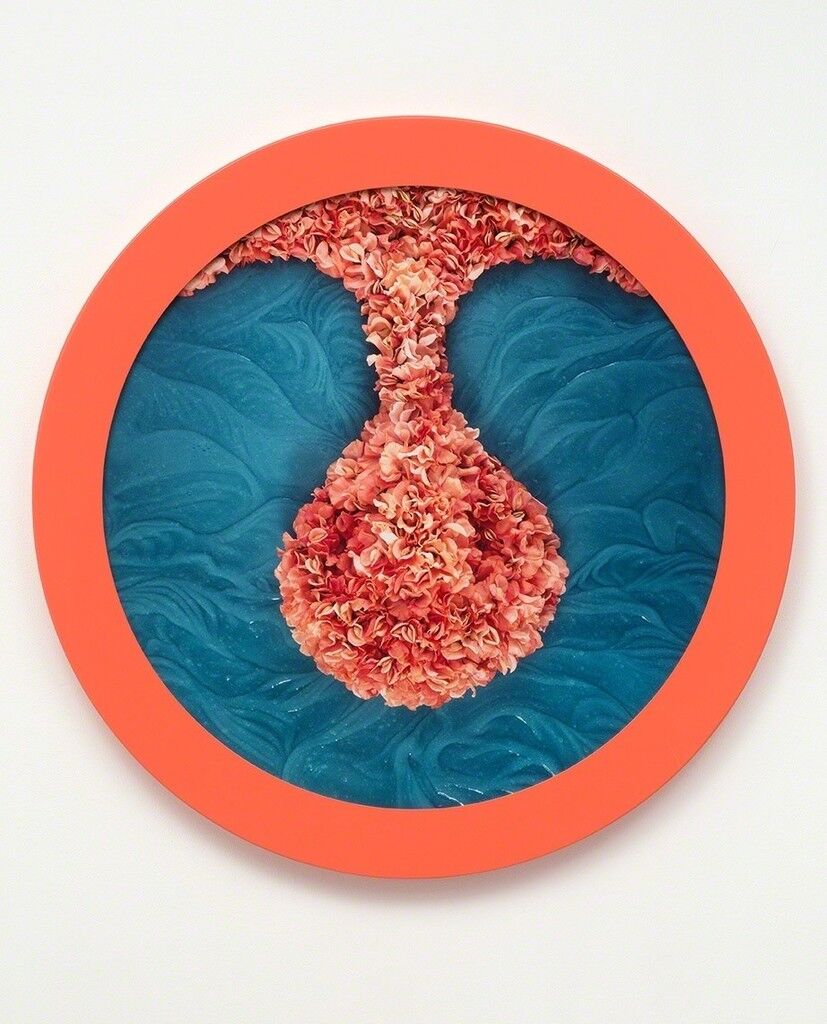 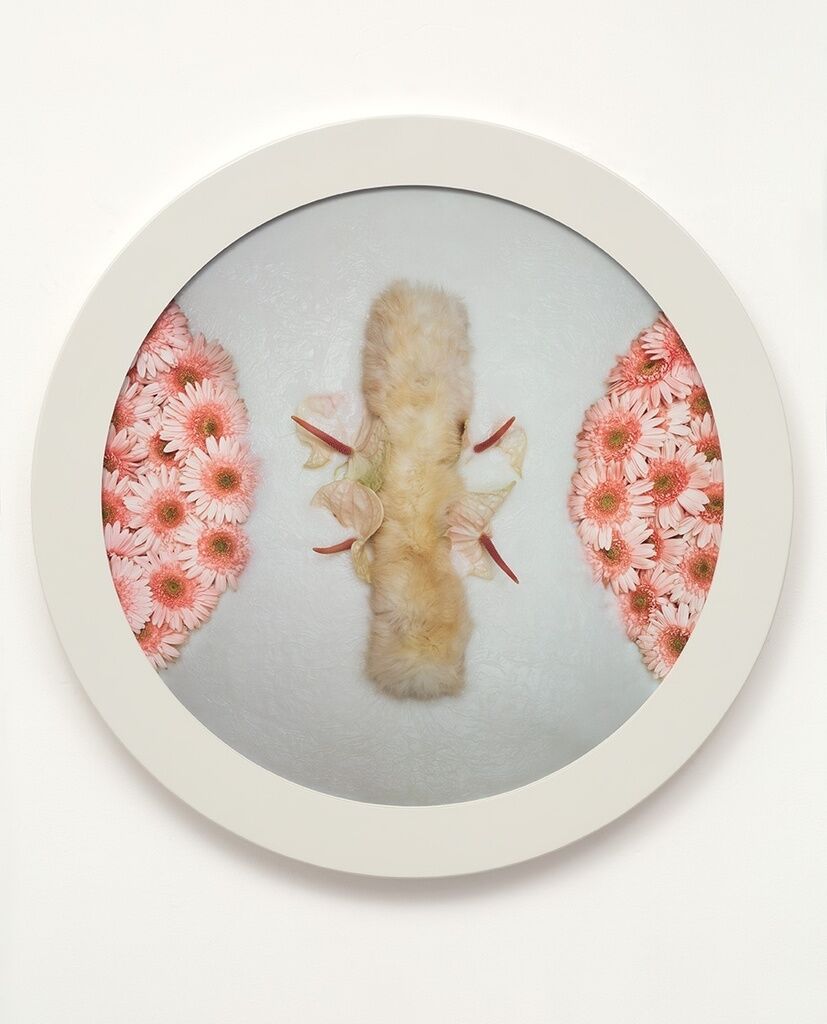 Helen Chadwick
Wreath to Pleasure No 8, 1992-1993
Richard Saltoun
By contrast, Kelly and fellow “Social Work” artist Helen Chadwick have been represented by galleries for most of their careers, Kelly earlier on by Postmasters Gallery in New York and Chadwick by Maureen Paley. When Richard Saltoun began representing Chadwick’s estate around five years ago, her works were selling for figures between a few thousand to a quarter of a million euros, he said, but in her heyday, shortly before she died in 1996 of a heart attack, her market (and the art market overall) was much smaller.
“Maureen Paley was a fantastic gallery, but the work was very shocking, very provocative,” he said. Chadwick did not make a full-time living off her art, instead teaching at several universities in the U.K., where she influenced the generation that would become the
Young British Artists
(YBAs) before her sudden death.
“It was just at that moment just before the YBAs,” said Saltoun. “I think if she had lived she would have been kind of a megastar.” At “Social Work,” one of Chadwick’s “Wreaths to Pleasure” works (1992–93) sold for £36,000, and four editions from the “In the Kitchen” (1977) series also sold, each priced at £15,000. Loop my Loop (1991), a photograph of intestine-like tubes intertwined with blonde hair, is on reserve for a major European museum, Saltoun said. 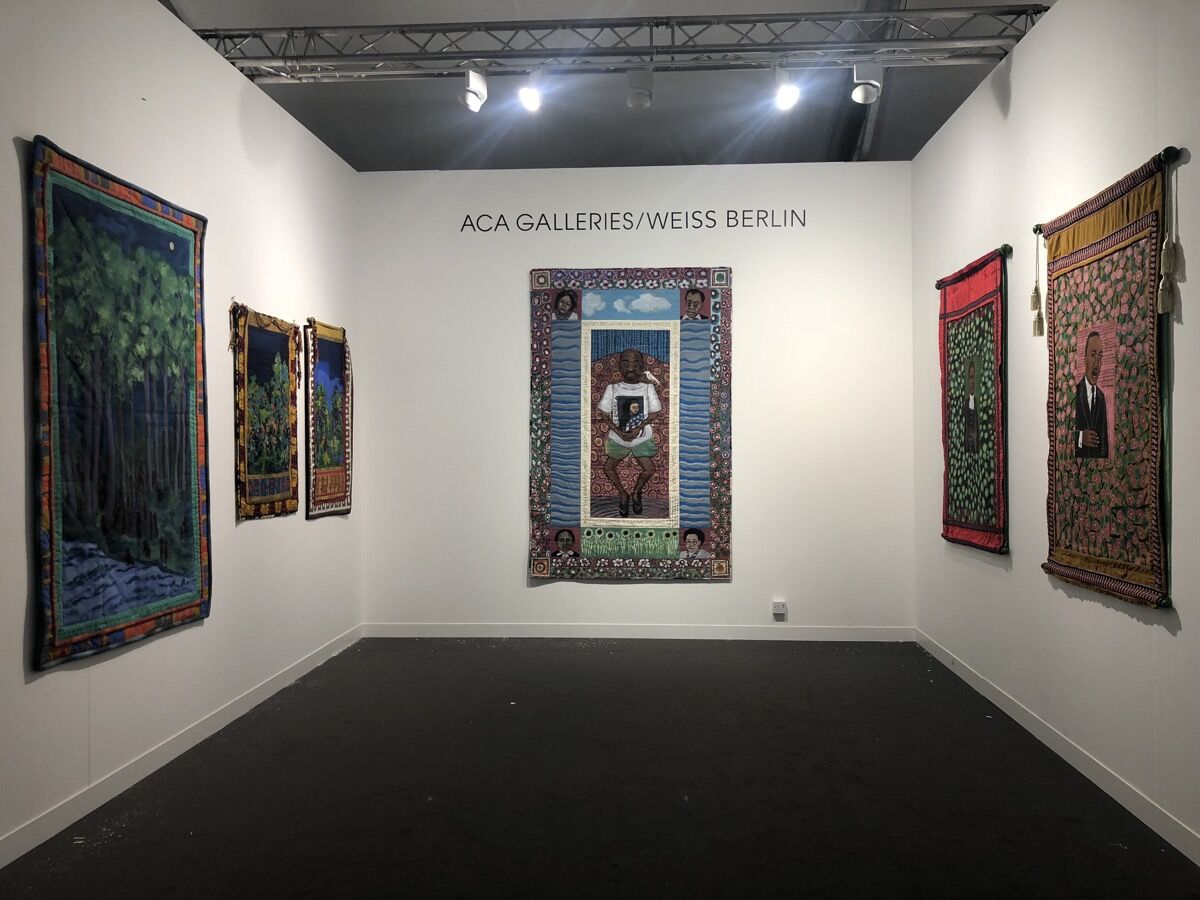 He noted that Chadwick’s market has grown in recent years, from mostly European collectors who “don’t follow the market” to include more North American collectors, some of whom discovered her work at this year’s Art Basel in June, where he sold two works—a set of 12 of her famous Piss Flowers (1991–92) sculptures for £250,000, and a set of 13 of her colorful Wreaths to Pleasure (Bad Blooms) (1992–93) photographs with powder-coated steel frames for £400,000.
While Ringgold’s work is now selling at a similar price point, she spent most of her life without commercial representation, said Dorian Bergen, who represents her in New York at ACA Gallery, thanks to the double layers of discrimination she faced in what was for decades an almost entirely white and male art world.
“She’s a woman, and she’s black. It’s really simple,” said Bergen. “She’s had to push and push and push her whole life.” Ringgold, who turns 88 next week, was even kept out of the
Spiral Group
, the collective of African-American artists founded in the 1960s by
Romare Bearden
,
Norman Lewis
, and others, according to Bergen.
“They let
Emma [Amos]
in, because she was really pretty,” she said. “They would not let Faith in the club.”

Nancy Spero
Aztec Sahagun, 1979
Galerie Lelong & Co.
Bergen began representing Ringgold in 1995, and found an early collector base in some of her more socially progressive Jewish collectors. But Bergen and Kirsten Weiss—who represents Ringgold in Europe through her gallery, Weiss Berlin—both pointed out that her work has been in museums and of interest to academics throughout her career, despite limited commercial inroads. The biggest reversal has been around Ringgold’s intensely political works from the 1960s; the first was only acquired in 2016 by the Museum of Modern Art, which added American People Series #20: Die (1967) to its permanent collection.
“Now her work is so relevant, and no one would touch the work in the ’60s,” said Bergen. “Now everyone wants it, because it reflects that time, and our time.” As of Thursday, the booth had sold one of Ringgold’s famous “Storyquilt” works, Marlon Riggs: Tongues Untied (1994), in the range of $300,000 to $400,000 to an Asian collector. Weiss said another quilt had sold but declined to provide details. Both dealers said her works have sold for upwards of $600,000 privately.
The political content of
Nancy Spero
’s work also limited her market audience, said Mary Sabbatino, who began representing Spero at Galerie Lelong in 2001. Her preferred medium of works on paper also did, even though she had been represented from the 1980s by galleries and dealers such as P.P.O.W. and Josh Baer. 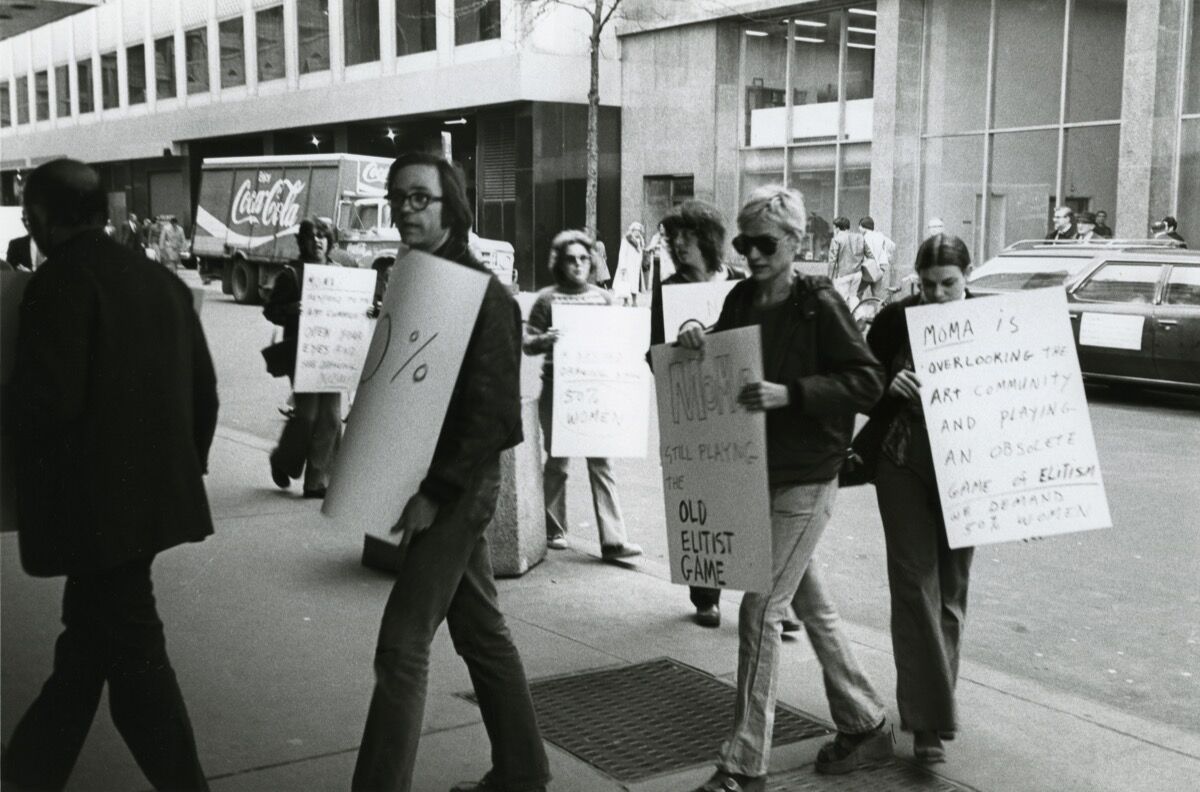 “You’re buying history, you’re buying a particular time in the culture, which was a fraught time,” Sabbatino said, gesturing at a 1967 drawing from Spero’s “The War Series” (1966–70) hanging in Lelong’s main booth, which had sold the first day for a figure between $70,000 and $80,000. “Artists who have politics at their core, this is never usually that tradeable in the market. It’s now become acceptable, but that doesn’t mean in its rawest form that enough people will buy it to develop an avidity for it.” Spero’s works in the “Social Work” section were available for $35,000 to $150,000.
The other artists in the special section include London-based
Sonia Boyce
, South African artist
Berni Searle
, and
Ipek Duben
, who is based in New York and Istanbul. By the time one had walked the length of the section, one felt wholly immersed in a world of women’s work and women’s visions. And though the rest of the fair was still dominated by men (a tally by The Art Newspaper found that 61% of the artists shown at Frieze London this year are men), many early sales highlights, such as works by Carol Bove at David Zwirner and
Marilyn Minter
at Salon 94, were by women.
And despite the growing dealer market for female artists, the secondary market remains highly male. Recent research by the U.K.-based Freelands Foundation found that only 3% of the top 10 highest-grossing lots in each of Sotheby’s contemporary art evening sales in 2017 were by women artists. The report also found that 66% of postgraduate art and design students were female in 2017, but just 28% of artists at major commercial galleries were women, a drop from 29% in 2016. 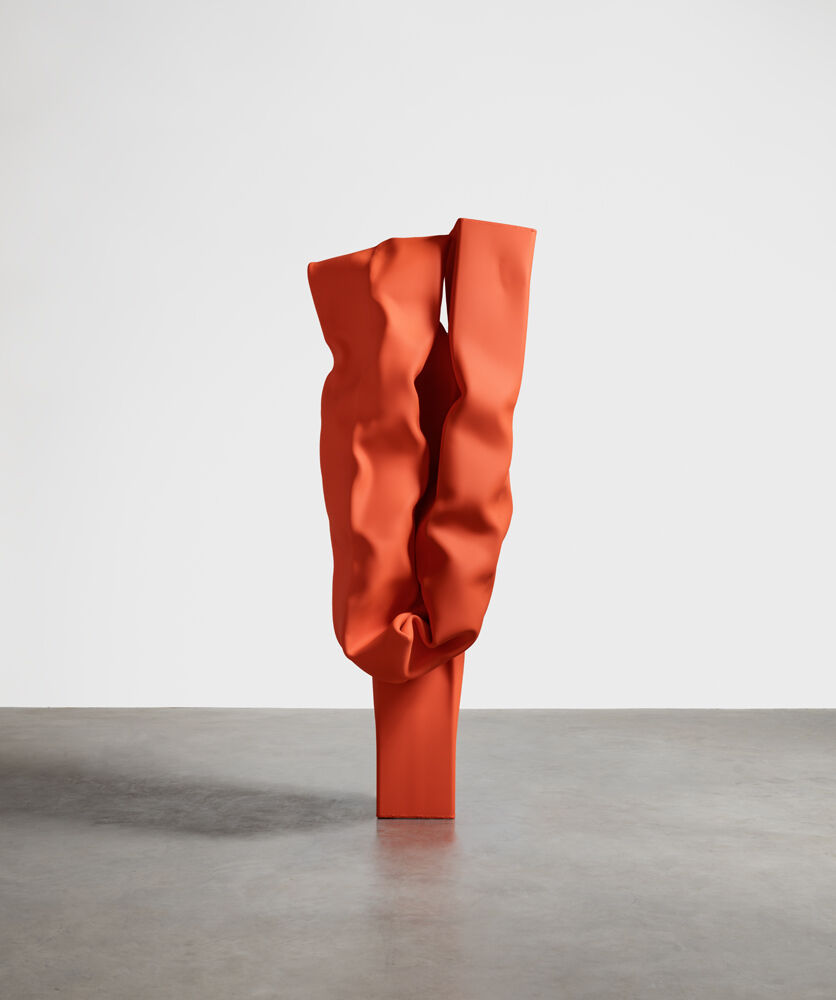 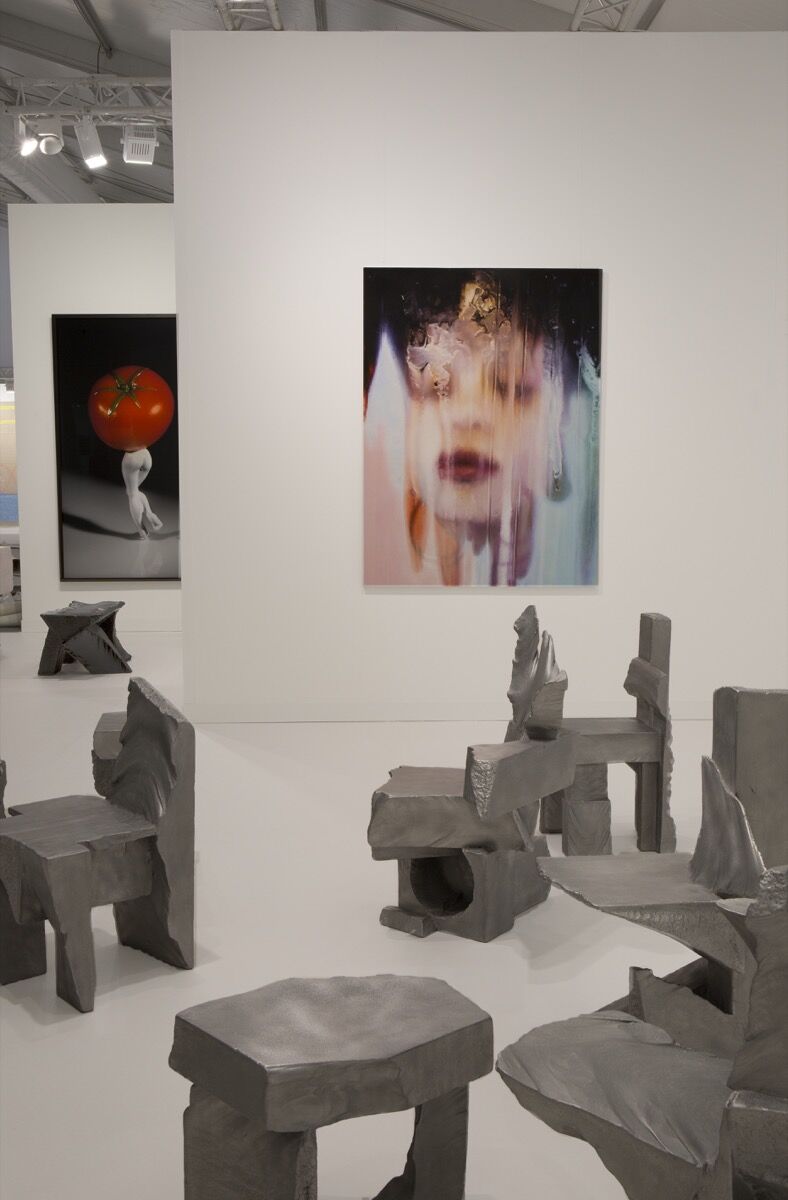 Melanie Cassoff, the managing director of the Freelands Foundation, said it’s worth looking at not just the cracks in the pipeline, but also the deeper social forces that channel women and men into different areas of study.
“One can even ask the question: Why are so many women doing these studies? Is it because women are more creative? Is it because women are being pushed by their parents to not go into the commercial sector, whereas men are?” Cassoff asked. “I think the arts are probably an outlier—they’re so badly paid as a career that men are probably discouraged.”
Mary Kelly said careers are not something she addresses with her students at UCLA, knowing that the art market can be fickle. Instead, she encourages them to find “what it is they really believe in, what is going to be their lifetime project—whether it sells or doesn’t sell.”
Anna Louie Sussman
Related Stories