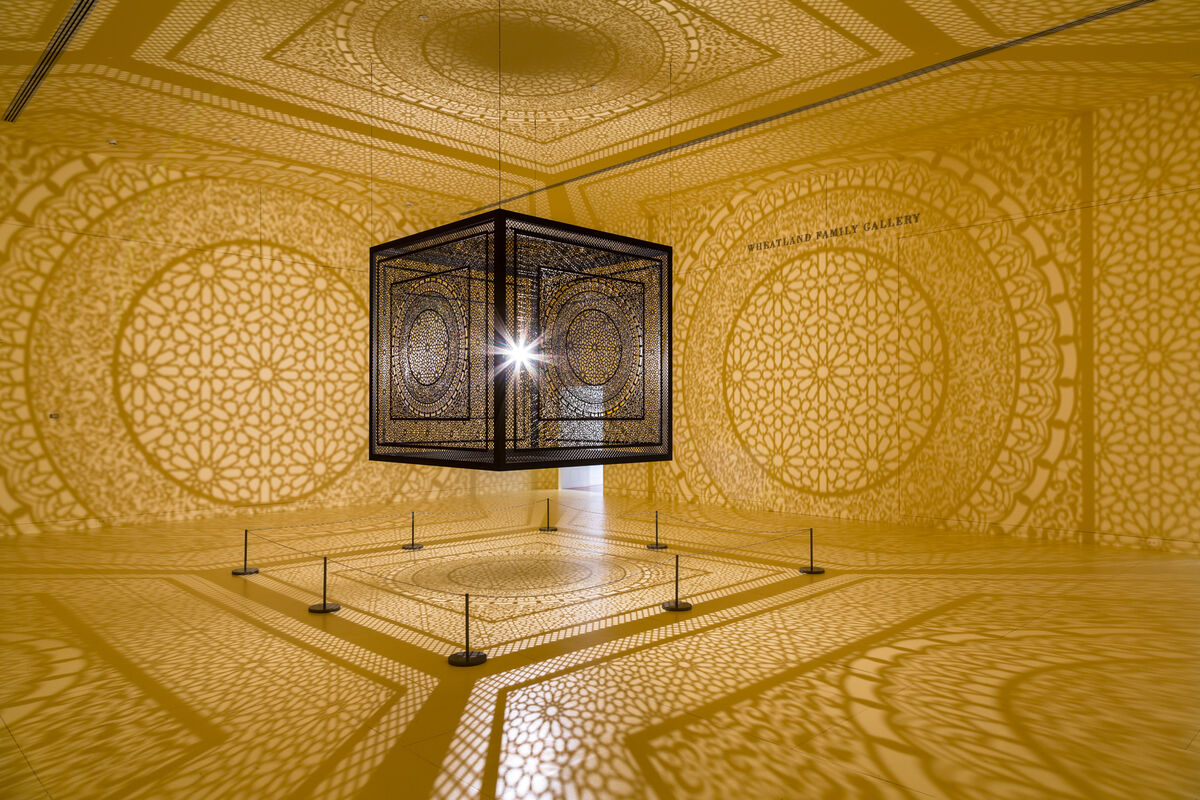 Anila Quayyum Agha, All the Flowers Are for Me, 2017. Courtesy of Peabody Essex Museum.

From the late 16th to the early 20th century, the salon-style hang was the predominant display convention across Europe. But hanging paintings like this—crammed cheek to jowl in a gallery space—has since fallen out of favor, in part because it tends to prevent viewers from concentrating on a single work.
But why, exactly? The reason may have something to do with the circuitry of the human brain—which is why at least one museum is branching out and recruiting a neuroscientist to join its team. “On a behavioral level, it can be distracting to walk into a room and have tons of things to look at,” said Dr. Tedi Asher, who earlier this year joined the Peabody Essex Museum, in Salem, Massachusetts, for a one-year appointment as Neuroscience Researcher. “At the level of neurological activation, each painting will be presented less strongly.”
I met with Asher at her office, where the walls are decorated with brain-themed cartoons and diagrams, including a jumbo-sized image of Purkinje cells in a mouse cerebellum. To corroborate her claim, Asher invoked the theory of sensory suppression, which holds that a barrage of sensory stimuli—such as the salon-style hang—deadens the optical-neurological apparatus of the viewer.
She illustrated the point by pointing to her smartphone and a plastic pen. “If you have multiple objects in the same view, you’re going to have some neurons that respond to the phone and other neurons that respond to the pen,” she said. “It’s been shown that the neurons that respond to one are going to actively suppress the neurons that respond to the other. The representation of the objects in the brain seems to be weakened by having multiple objects.”
The appointment of Asher is part of a broader campaign by Dan Monroe, the museum’s Rose-Marie and Eijk van Otterloo Director and CEO, to deploy neuroscience in the service of exhibition design. 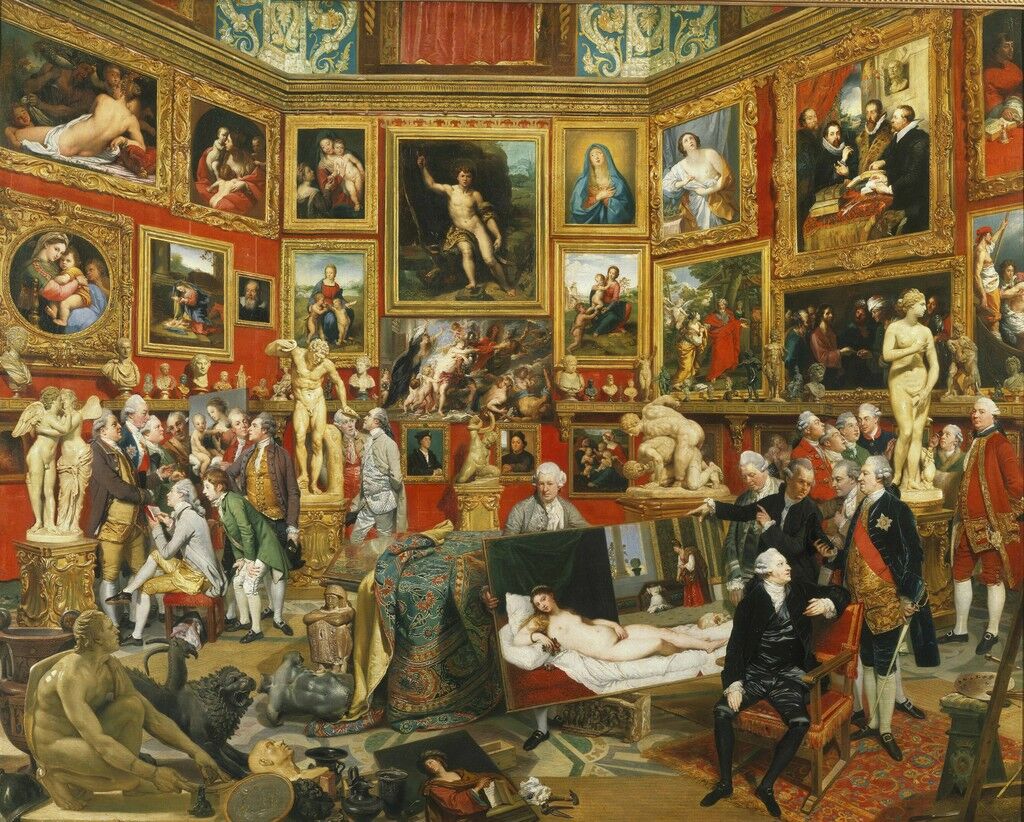 Johann Joseph Zoffany
The Tribuna of the Uffizi, 1777
Royal Collection Trust
Under his leadership, this mid-sized museum north of Boston, which is best known for its extensive holdings in Asian and maritime art, has already gained national attention for convention-busting exhibitions. At the entrance to “Asia in Amsterdam: The Culture of Luxury in the Golden Age,” visitors were greeted by cylinders of spices—cloves, cinnamon and peppercorns—that promoted more lasting memories by engaging multiple senses. For “Rodin: Transforming Sculpture,” a troupe of live dancers confounded viewer’s expectations of the white cube.
Hiring Asher in May was the next step in pushing forward the Peabody’s mission. Over the next year, she’ll meet regularly with an advisory panel of neuroscientists, and will ultimately produce a publication that crystallizes her findings.
“Anecdotally, we’re all familiar with the idea that a satisfying experience has this delicate balance of meeting and violating our expectations,” Asher said. “In the context of exhibition design, how can we surprise people in a way that won’t be jarring but will help viewers make sense of what they have seen? Something that is unexpected takes longer to detect—but it also makes a more lasting imprint.” At the Peabody Essex, Asher will apply the principles of neuroaesthetics—the synthesis of neuroscience and aesthetics—to a reinstallation of the museum’s permanent collection that will unfold over the next five years. Since arriving at the museum, she has been an advocate for the gallery-goer’s brain, making the case for display conventions that sidestep outmoded curatorial strategies (overloaded walls, indigestible wall text).
One idea that she is developing are rest areas, or “palate cleansers,” that will allow visitors a respite from sensory stimulation, much like the intermission in a play.
The implicit aim of the museum’s neuroscience initiative, made possible by a $130,000 grant from the Boston-based Barr Foundation, is to boost the institution’s relevance at a time of declining attendance across the museum landscape. A 2015 study by the National Endowment for the Arts presented a startling number: Only 21 percent of adults in the United States visited a museum or gallery in 2012, a drop of 5.5 percent from 2002. While the Peabody Essex Museum has defied this trend—over the same period, attendance at the museum has risen steadily—it is nonetheless attuned to the plight of the museum sector as a whole.
“The loss of attendance leaves one to ask, ‘What are the dynamics that are causing this?’” said Monroe. “The strategies and practices that we, as a field, continue to employ are not very effective and, in my view, never will be—they do not recognize the way that people’s brains works.
“That said, we have to all recognize that neuroscience is in its infancy. Nobody understands, for example, how consciousness is created or even what it is.…Ultimately, the deciding factor will be whether or not we’re able to demonstrate that, by better understanding some key elements of the way our brains work, we can create experiences that more people find meaningful and impactful.” 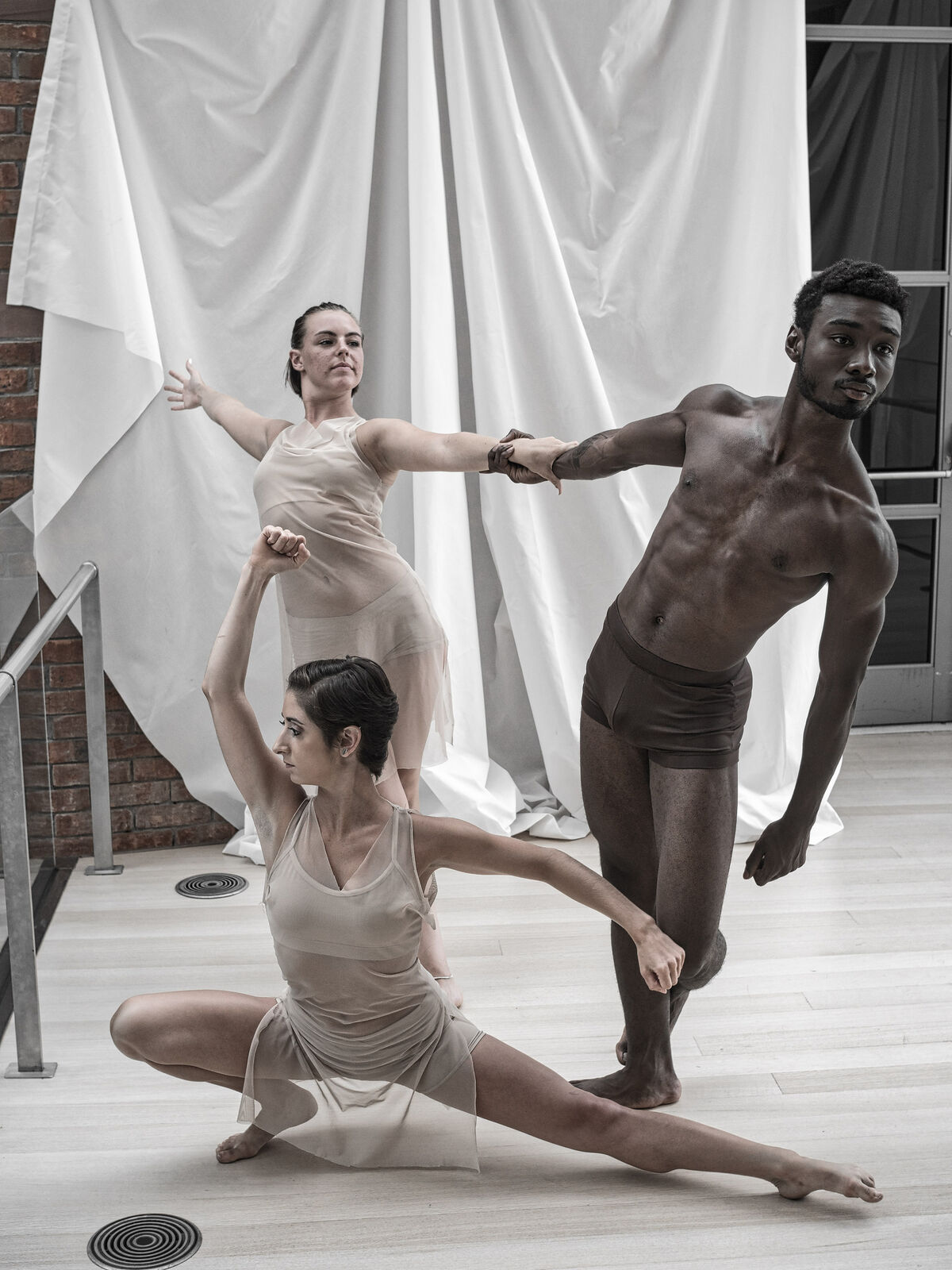 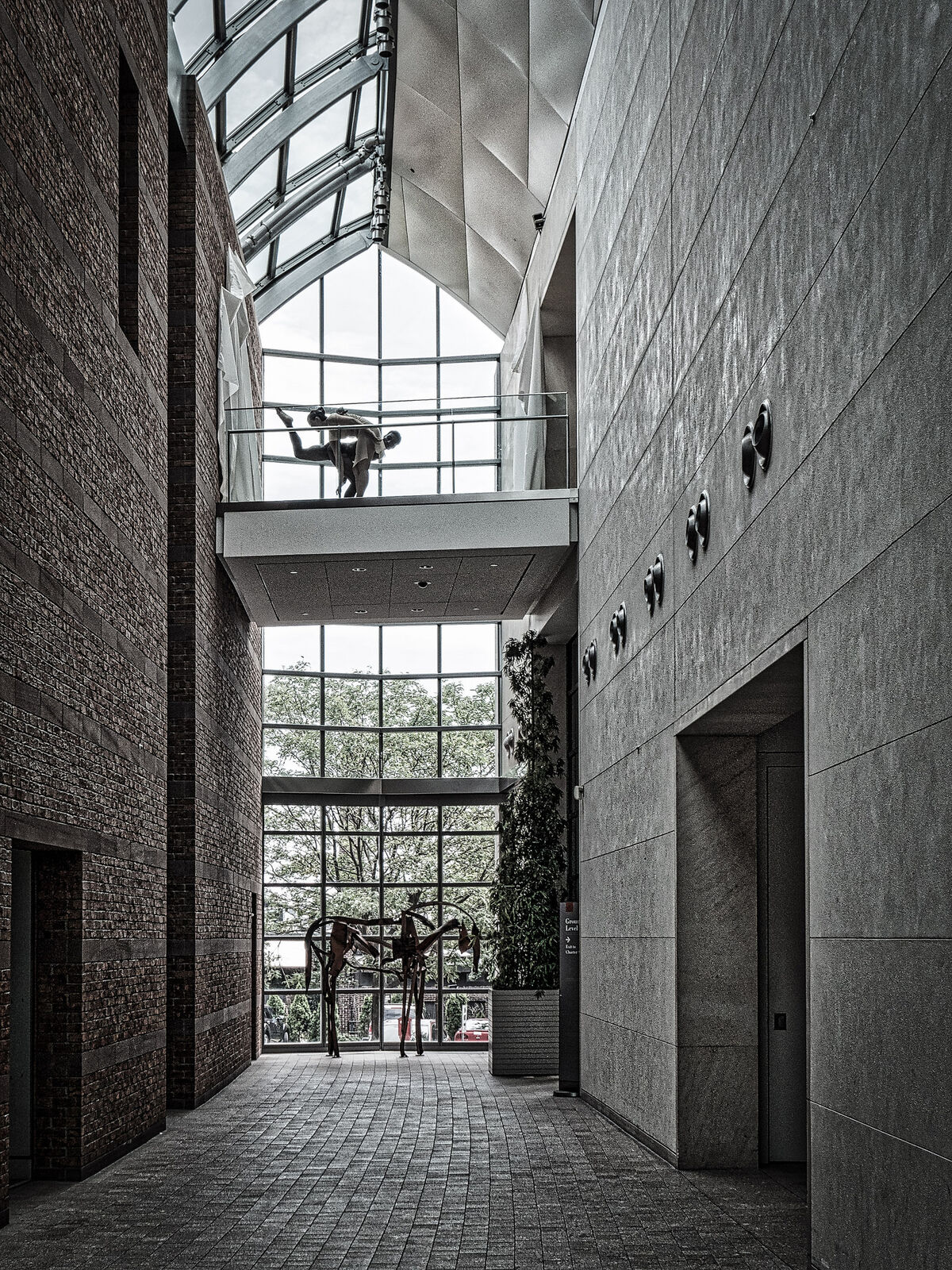 Advertisement
Asher arrived at the Peabody Essex Museum almost by happenstance, dashing off a cover letter to the museum when an advertisement for the position was circulated on an internal listserv. Raised in Washington, D.C., she remembers “falling over” after seeing
Claude Monet
’s haystacks at the Art Institute of Chicago but ultimately dedicated herself to the sciences, receiving a bachelor’s degree in biology from Swarthmore College and later a Ph.D. from Harvard Medical School’s Biological and Biomedical Sciences program, where she investigated the linkage between aggression in male mice and serotonin-producing neurons. Her role at the Peabody Essex Museum is that of a benign disruptor, evaluating the format of forthcoming exhibitions in the context of neural pathways. “People seem to appreciate that I’m a little bit of an outsider,” she said.
Having a scientist on staff might be a new development, but the machinery of vision—and the relationship between sensation and perception—has vexed art lovers for millennia. In Art and Illusion (1960), Ernst Gombrich tells of a Pythagorean sage who, upon considering the case of a cloud that resembles a centaur or stag antelope, surmised that perception is a creative act on the part of the beholder. Or, as Gombrich put it: “What we read into these accidental shapes depends on our capacity to recognize in them things or images we find stored in our minds.” Thus, an image is not an index of the material world but a function of the brain.
“The beholder’s share, as it’s known, is a classic problem in art history,” Eric Kandel told me. He’s a Nobel Prize-winning neuroscientist at Columbia University and author of Reductionism in Art and Brain Science: Bridging the Two Cultures (2016). “What’s going on in the beholder’s head when he looks at a work of art? This is an ongoing area of research. It’s still in its early stages but potentially quite interesting and, I think, quite important.”
In recent years, Kandel has emerged as an evangelist for interdisciplinary inquiry, taking it upon himself to mend the schism between art and science “by focusing on a common point at which the two cultures can meet and influence each other,” as he writes at the beginning of his book. Nevertheless, some art historians are skeptical of neuroaesthetics, which may at times slip into “a spurious reduction of art to the science of the brain,” as Jonathan Gilmore, currently an Assistant Professor at the CUNY Graduate Center and Baruch College, wrote in 2006. 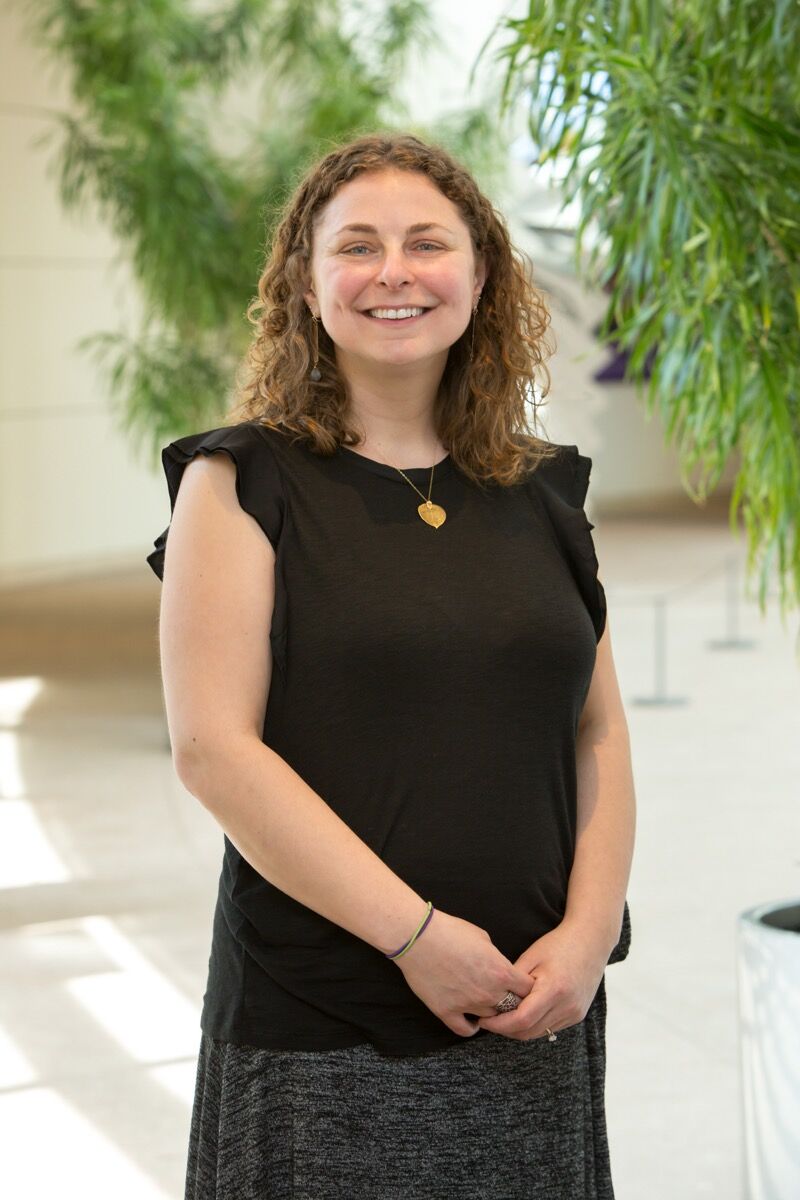 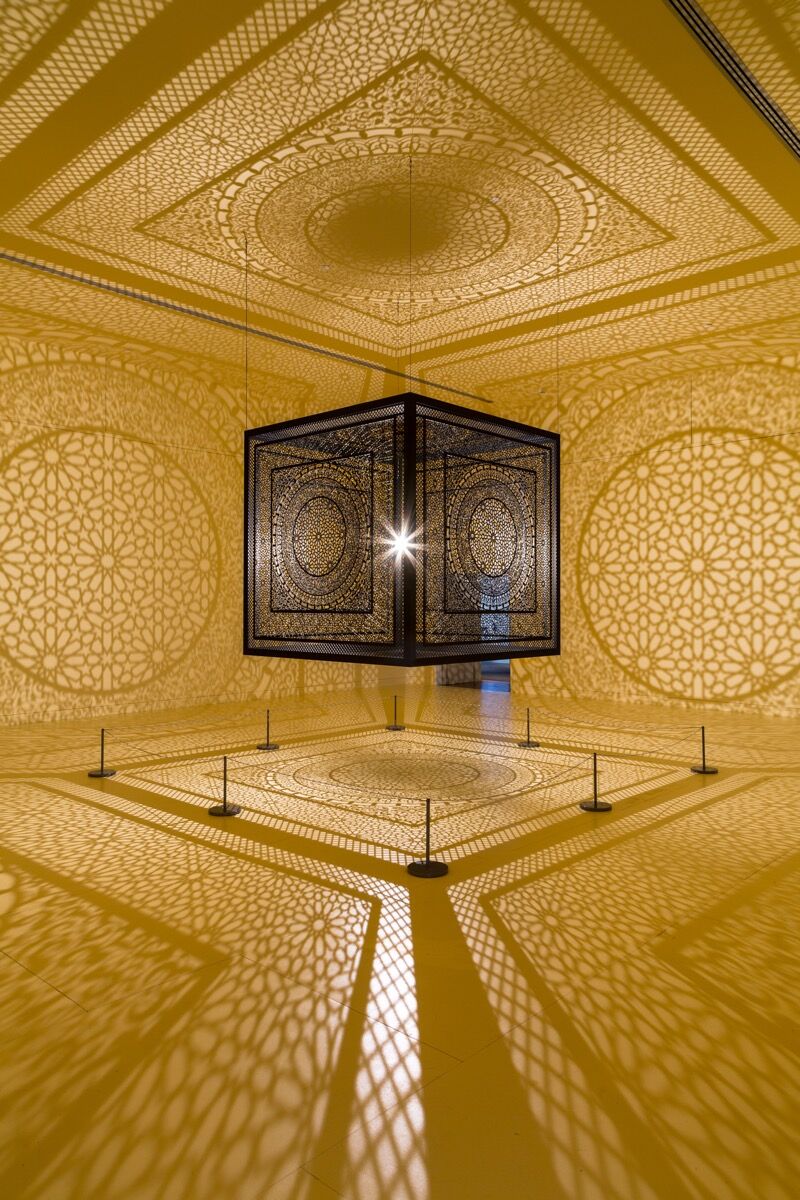 Anila Quayyum Agha, All the Flowers Are for Me, 2017. Courtesy of Peabody Essex Museum.

“Some art historians are enthusiastic [about neuroaesthetics], and others think it’s ridiculous,” said Kandel. “They say, ‘What does it have to offer? It demeans art to think that it has a biological explanation.’ But they should not worry: Neuroscience is not going to replace an art-historical approach to art; it’s going to supplement and enrich it.
“This is a very interesting experiment on the part of [the Peabody Essex Museum],” Kandel continued. “One of the things that strikes me with many current exhibitions is that they’re too damn large! It’s absolutely exhausting to go through them.”
For her part, Asher is sensitive to the fact that her appointment is a landmark event—but she’s also eager to focus on the business at hand. The challenge before her is to apply lessons from carefully designed experiments in a laboratory setting to the business of running an art museum with more than 300 personnel and an operating budget of $30 million. “The way [my colleagues here] talk about things feels much less structured than in the science world, where it is much more about connecting the dots,” she said. “I feel like there is more fluidity to how things are approached in a museum.”
After our interview, we entered the museum to see
Anila Quayyum Agha
’s All the Flowers Are for Me, an immersive installation in which the white cube has been converted into a light chamber, with a foliate pattern projected on the floor, walls, and ceiling. Encased in a lemon-colored aureole, Asher expounded on the neurological processes at work in our experience of the installation—and the sensation of being caressed by light.
“Your experience of this installation depends on what it reminds you of,” she said. “When you recall a memory, the regions of your cortex that process different senses become activated. So, if you’re looking at an image of a fur coat, you might feel as though you can touch the fur, and that’s because that part of your brain that would process the tactile experience is becoming activated by the memory.”
“But, of course,” she added, “it’s all in your mind.”
—Christopher Snow Hopkins
Related Stories

How the White Cube Came to Dominate the Art World 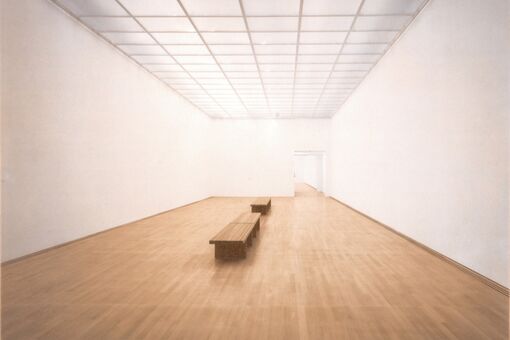 How the White Cube Came to Dominate the Art World
Abigail Cain
Jan 23, 2017