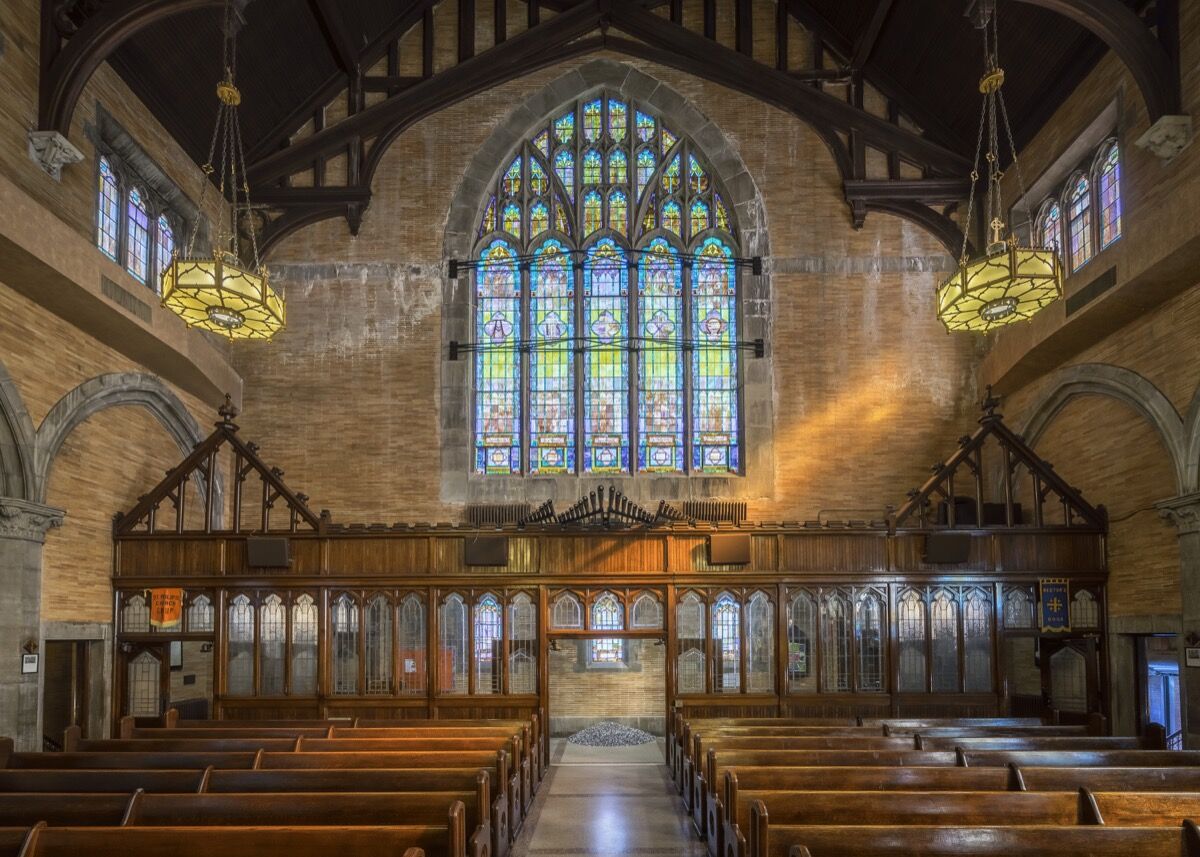 Walk into St. Philip’s Church in Harlem this month, and you’ll be greeted by an unassuming pile of black licorice candies. Heaped under the massive stained-glass window at the back of the sanctuary, their clear plastic wrappers reflect glints of filtered sunlight.
Dubbed Untitled (Public Opinion) (1991), the heap of licorice is one of conceptual artist
Felix Gonzalez-Torres
’s iconic candy spill installations. But its presence in Harlem (as opposed to its home in the collection of the Solomon R. Guggenheim Museum) is actually the brainchild of two Pittsburgh-based artists,
Lenka Clayton
and Jon Rubin. Relocating the Gonzalez-Torres represents just one facet of the pair’s ambitious, wide-ranging project ...circle through New York, which will link six locations across New York City for a period of six months.
The project, one of the first commissioned by the Guggenheim Social Practice initiative, has been more than a year in the making. Clayton and Rubin drew a circle, five miles in diameter, through New York and selected six public spaces to incorporate along that route. In addition to St. Philip’s Church, the other venues include Pet Resources in the South Bronx, the Guggenheim and NYU’s Institute for the Study of the Ancient World on the Upper East Side, and the Frank Sinatra School of the Arts and television studio Jus Broadcasting in Astoria.
Each location has offered up an entity that represents its institutional identity—from a talking parrot to an 3,400-year-old Hurrian hymn thought to be the oldest song in the world—and over the course of the project, these will travel between the venues, changing location monthly.

Although interdisciplinary artists Clayton and Rubin have been friends for years, this represents the pair’s first formal collaboration. Clayton’s work often transforms day-to-day activities from mundane to poetic; through her project Mysterious Letters (2009–ongoing), she and fellow artist Michael Crowe have sent off 2,700 personalized, often whimsical missives in an attempt to contact every household in the world. For his part, Rubin reimagines spaces of exchange—like Conflict Kitchen (2009–ongoing), a functioning Pittsburgh restaurant that serves the cuisine of countries with which the U.S. is in conflict.
When they heard that the Guggenheim was soliciting submissions for the new social practice initiative, which encourages community engagement, Rubin says they viewed it as a singular opportunity. “This older, venerable museum in New York has a specific kind of cultural and socioeconomic and geographic identity to the city—how might a project dislocate or relocate that identity and involve an orbit of other places in the city that might not normally be in conversation with the museum itself?” he asks.
“We were interested in creating a framework that mixed up the usual ways that things function, that put a wrench in the works, if you like,” Clayton adds.
The final title of Clayton and Rubin’s work is a mouthful: A talking parrot, a high school drama class, a Punjabi TV show, the oldest song in the world, a museum artwork, and a congregation’s call to action circle through New York (2017), or ...circle through New York, for short. It references the six entities that are now in rotation between venues.
During March, the project’s first month, a drama class from Frank Sinatra School of the Arts will appear on a comedy show about a corrupt cop at Jus Broadcasting, and the staff of the Guggenheim will sing the world's oldest song daily in the museum’s rotunda. 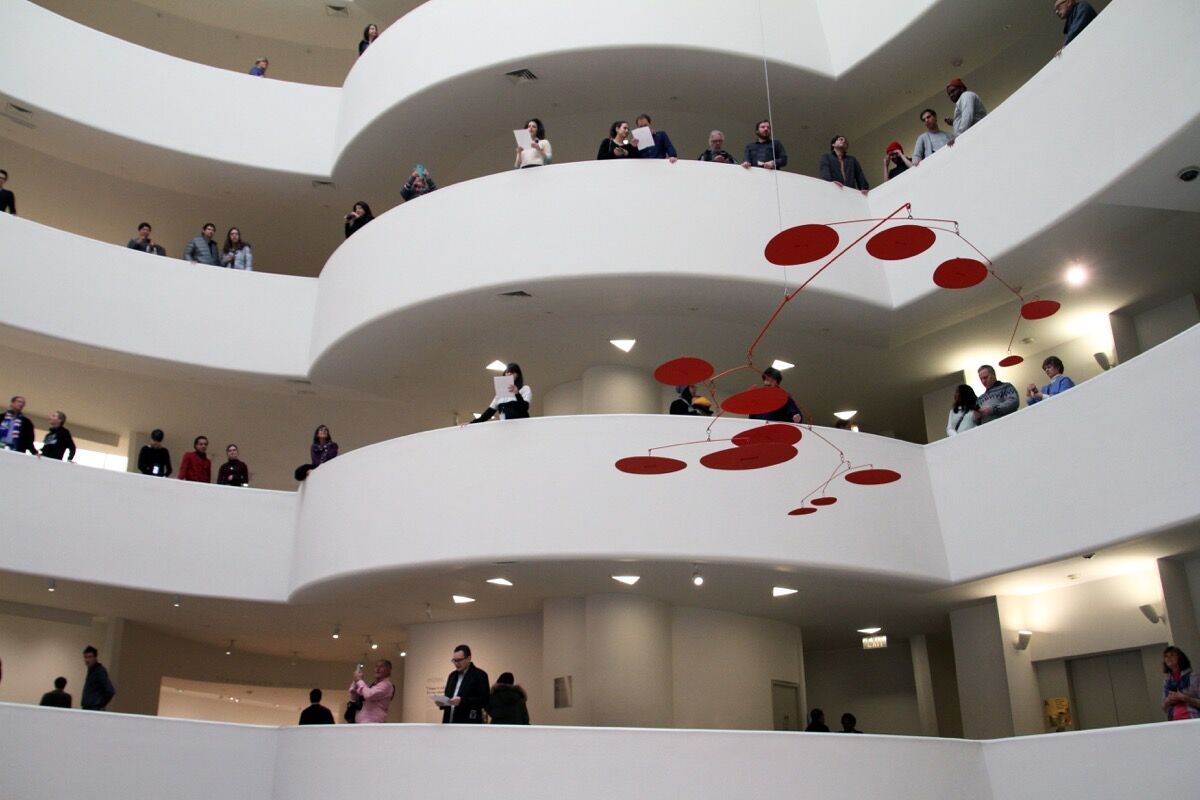 The oldest song in the world (the “Hurrian Hymn” from ancient Ugarit (contemporary Ras Shamra, Syria) is sung by staff members at the Guggenheim Museum as part of “Lenka Clayton and Jon Rubin: ...circle through New York.” Photo courtesy of the artists.

Advertisement
The pair noted that the most time-consuming portion of the project was the selection process. They spent roughly a year traveling through New York, sometimes on foot, sometimes on bicycles, to visit every public space that fell a few blocks from their imaginary circle. Sometimes these showed up on Google Maps. Other times, their discoveries were simply by chance—they found Jus Broadcasting, a Punjabi television studio with some 1.5 million viewers, when they visited its downstairs neighbor and were referred upstairs.
When they had found a location that fit the profile of their project, Rubin says, they would walk in and explain that they were artists working with the Guggenheim. “People’s faces would light up in delight that they’d fallen on our imaginary circle,” Rubin chuckled. “And certainly, the ones that absolutely didn’t light up, we knew that they probably weren’t going to be great partners. But you’d be surprised how many people—from mechanic shops to thrift stores to senior centers—were really excited to fall on an imaginary circle.”
At the end of this process, Clayton and Rubin had a long list to whittle down. “It wasn’t just choosing the six most interesting,” Clayton says. “It was asking, how do you tell a complete story with these six individual places?” Rubin says they conceived of the title as a sort of poem. “I think that was our way of testing the connectivity and dissonance within the set of places.”
They also considered what sort of element could be passed along from each venue, and how it would be incorporated into each of the other institutions. “What was really important to us was that this thing that was being sent around had the capacity to change and adapt and be interpreted differently,” says Clayton. 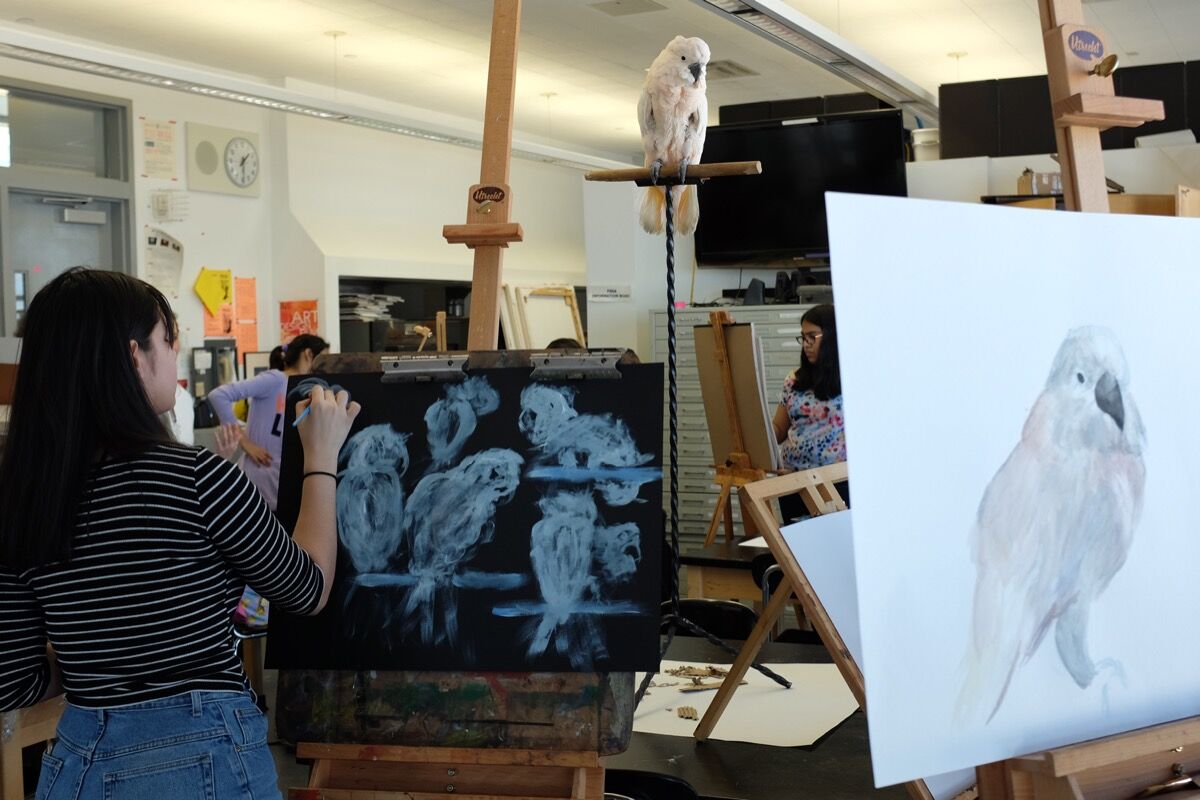 A talking parrot from Pet Resources in the Bronx is drawn by students at the Frank Sinatra School of the Arts in Astoria, Queens, as part of “Lenka Clayton and Jon Rubin: ...circle through New York.” Photo by Giacomo Francia, courtesy of the artists. 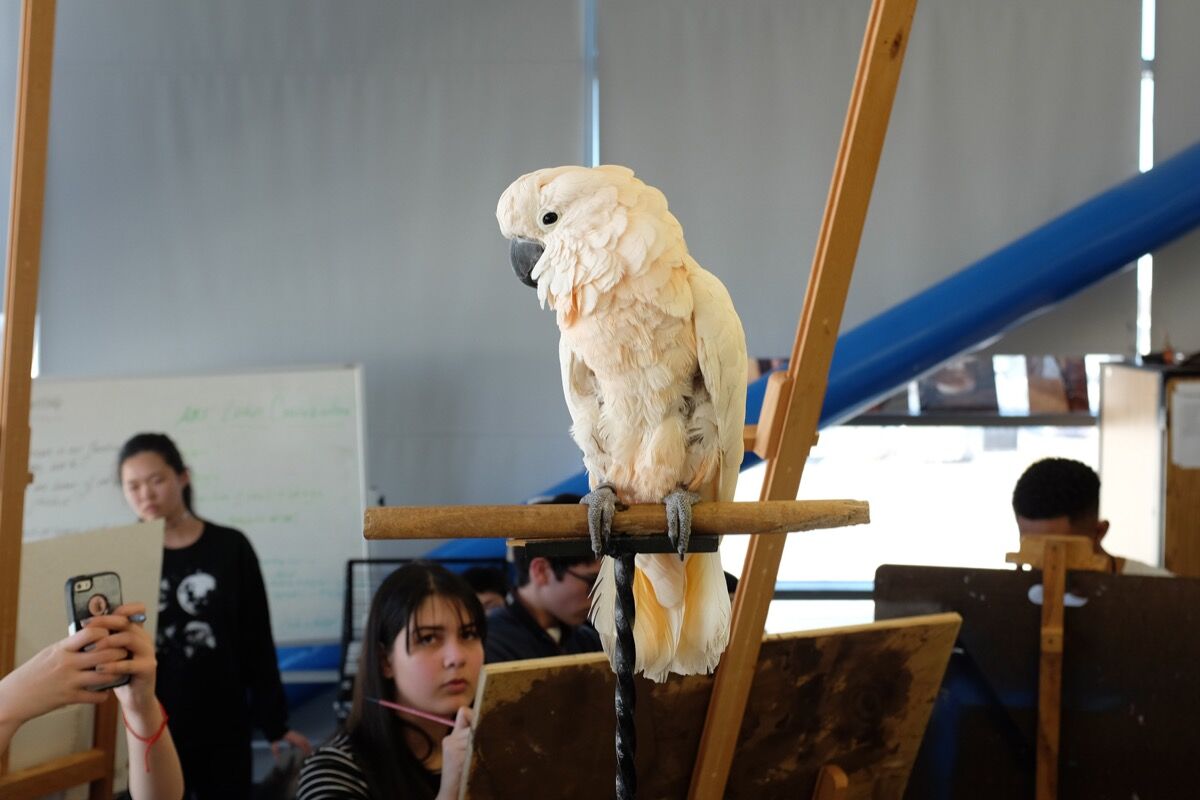 A talking parrot from Pet Resources in the Bronx is drawn by students at the Frank Sinatra School of the Arts in Astoria, Queens, as part of “Lenka Clayton and Jon Rubin: ...circle through New York.” Photo by Giacomo Francia, courtesy of the artists.

The parrot, Pinkie, was one of the first selections they finalized. It is currently in residence at the Astoria high school, where it’s served as a life drawing model for the students. But that’s just the beginning—the schedule has been intentionally left open to allow for flexibility. Perhaps the parrot will star in a student film or preside over a dance class for a week.
“If you look at it in its entirety, it’s a huge work,” Rubin acknowledges. “But it’s also made up of a lot of really intimate, small moments and experiences, some that will only be available for internal audiences, like the students at Frank Sinatra School of the Arts. And then, hopefully, people who would not normally go to a church in Harlem or a pet shop in the Bronx will feel this as an invitation to do so and experience something they might not have otherwise.”
—Abigail Cain
Related Stories 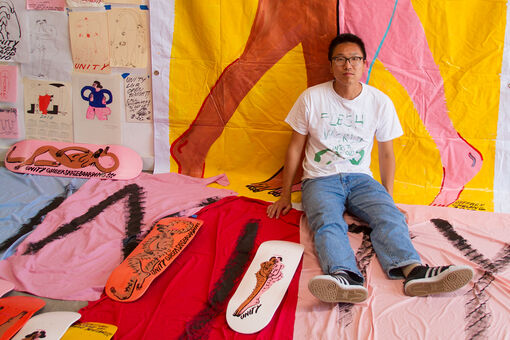