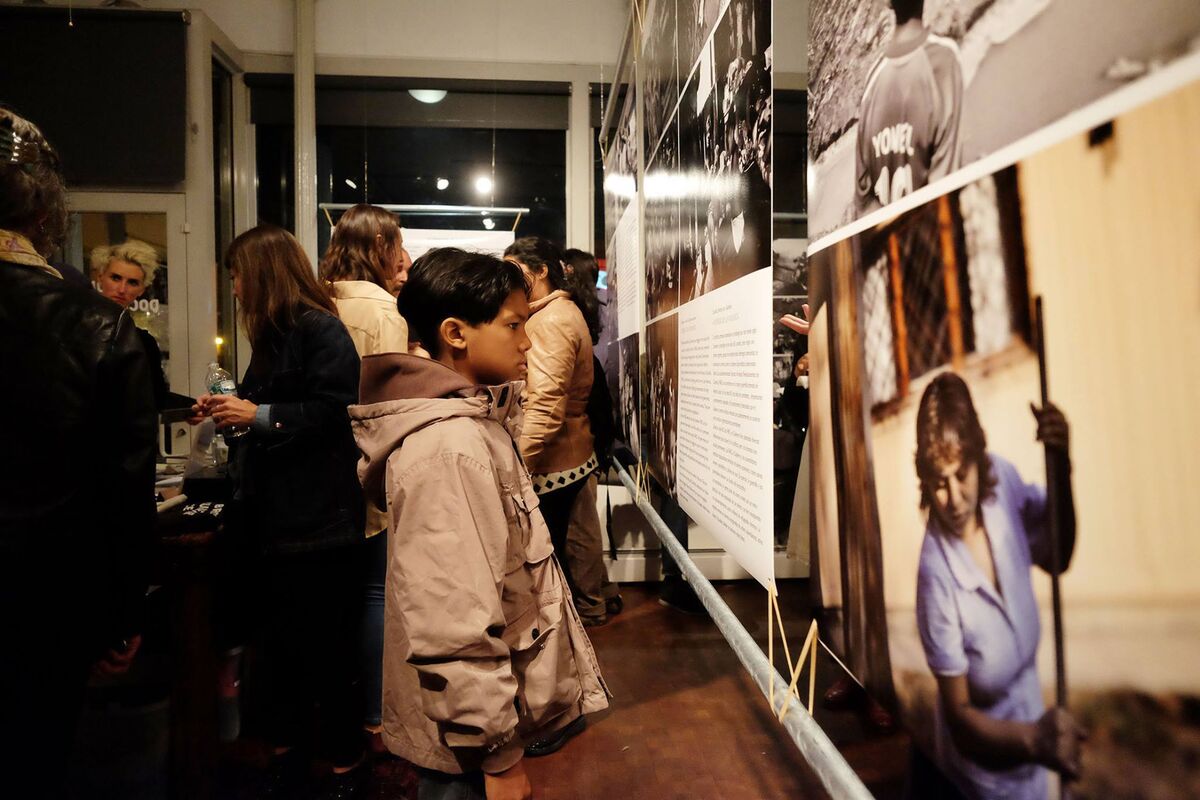 I’ve spent a lot of time over the last several years thinking about how small art spaces can facilitate social bridging. In navigating my professional and social circles in New York City, one of the most segregated metropolitan areas in the nation, it’s impossible to ignore the stratification of every kind—class, culture, language, race, and education level. I’ve thought about social bridging as I leave my mentees from my neighborhood to teach at an elite university. It came to mind after the mosque next door, attended by West African newcomers, was shot at for the second Ramadan in a row. Social bridging also comes to mind when I listen to my mother, a local artist in Newark, New Jersey, describe the people who are moving into her community—MFA types from Brooklyn whose work uses a completely different language than the one to which she is accustomed.
Of course, art spaces are no substitute for safe streets and more evenly distributed public services. But I believe they can go a long way towards fostering wider social inclusion. After running an art space and observing how others operate within their communities around the world, I’ve had the fortune to collect some possible approaches to bringing people across social divisions together to have meaningful experiences with one another in the context of an art-oriented environment.
The Bronx Documentary Center (BDC)—the gallery, screening room, and educational space I co-founded with photojournalist Michael Kamber in 2011—straddles a unique position: It draws journalists and photographers from the highest professional echelons of the media industry, as well as diverse members of its immediate local community, which has weathered waves of high unemployment, drug trades, poverty, and disinvestment. A film screening or a talk with a Pulitzer Prize-winning reporter draws parents of students in the afterschool program, members from the neighboring church, and journalists who have worked around the world. Without compromising the rigor of the artistic program, cultural competence and “community engagement” were woven into the design of the BDC from the beginning.
However, just as sitting in a diverse crowd at a baseball game doesn’t necessarily create social bridges, merely standing around at an art opening together isn’t social bridging, either. For these bridges to truly form, an exchange of conversation and ideas is vital. Most importantly, it cannot happen successfully when one group is thought of as irrelevant. And though bridging may entail making resources available to those who need it, it is not the same as charity. You give and you take; it is not one-directional.
These are some principles that have worked at the BDC and other places I have observed:

Who do you want in the room? 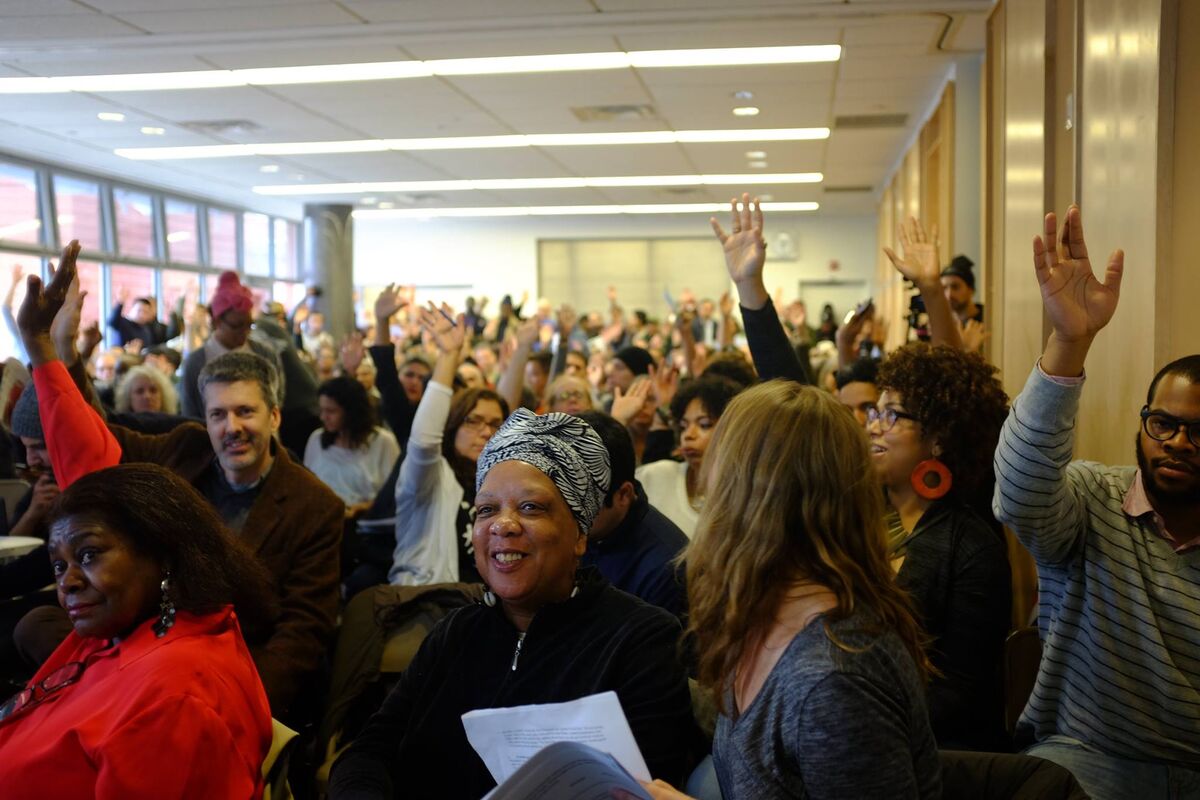 Receptions, and public programs in particular, are often attended by people in relatively small, closed circles, but this can be changed by cultivating a diverse network around an organization. In 2010, I attended one of the best events I had ever been to: “Rompe Puesto,” a one-night-only celebratory performance at the Bronx River Art Center where guests were invited to break piñatas created by more than 20 artists. It was the first art world anything I had been to that was attended by such a wide range of people. The organizers, artists
Blanka Amezkua
and
Ronny Quevedo
, made sure the event took place later in the evening so that local people with jobs could attend. Not only were there artists of different races present at a time when so many openings were attended by self-segregating crowds, but the room was alive with cousins and uncles and grandparents from the neighborhood, who came despite it being in the dead of winter, just after New Year’s Day. I marvelled as everyone took turns handing off the bats to one another, joyously breaking open the piñatas together. 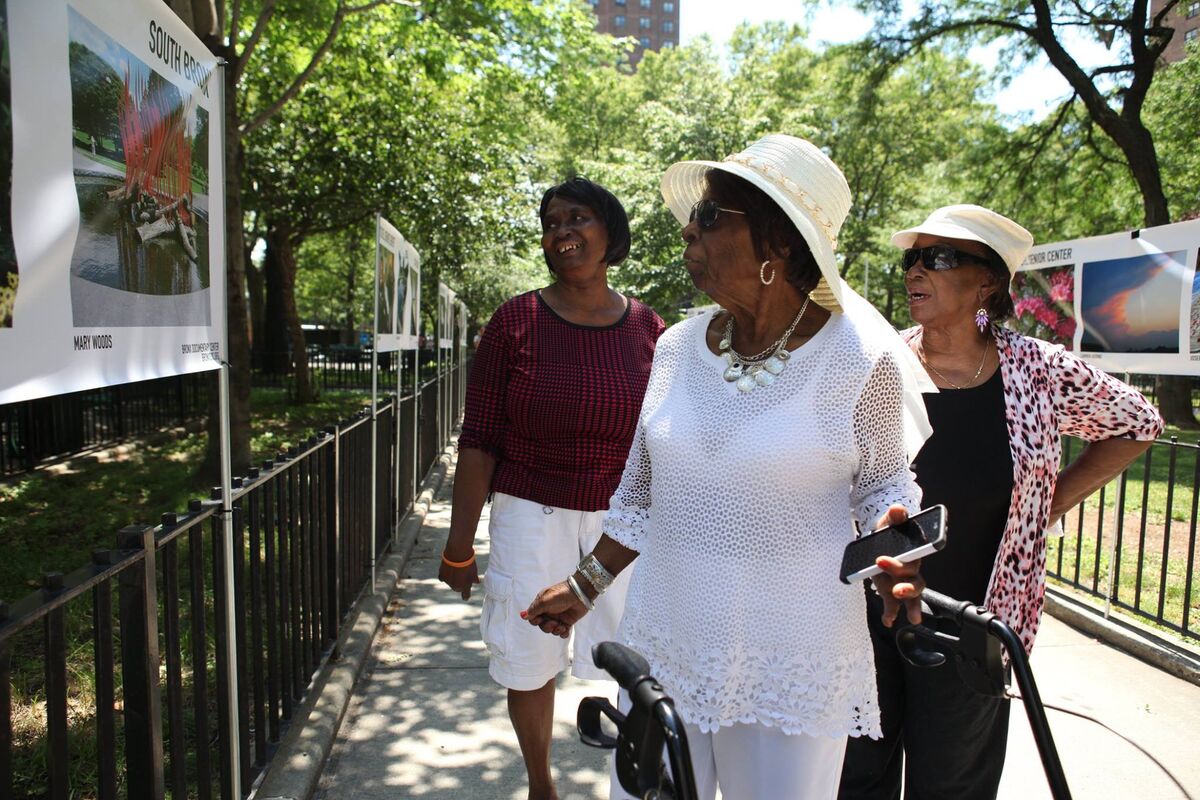 Advertisement
Arts organizations often target school groups in their outreach, but each neighborhood is home to many other groups of people, such as church groups or senior housing residents, who may find affinity with the themes and topics addressed in an art space’s programming. Under the direction of photography instructor Rhynna Santos, the BDC has completed its second program for older residents of a local housing project. The group’s members, who spanned ages 60 to 89 and were of different faiths and ethnicities, had their portfolios reviewed by members of the Bronx Photo League, a collective of emerging photographers. I used to wonder if some well-educated artists and photographers find it easier to engage a child of a lower socioeconomic status than to engage an adult of said status as an equal, especially as economic segregation has made those kinds of encounters hard to come by. The key is to find activities that bring different demographic groups together.

Look for insight, and be a connector 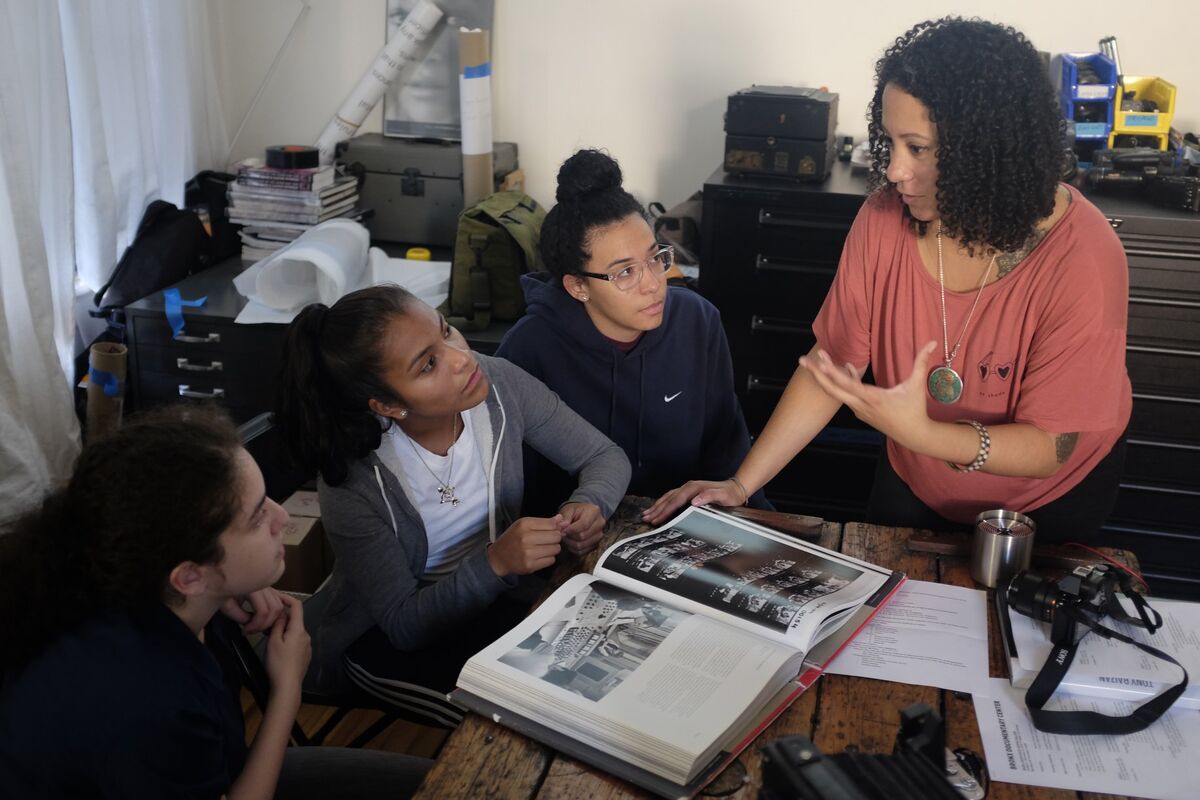 An organization committed to social bridging understands it is not just part of a professional network, but part of a local network of people and institutions. It must assess its place beyond the art world in order to understand which local networks it can join, and what kinds of relationships it might facilitate. Who is in the community that we might learn from? Who might benefit from meeting one another?
For example, during an exhibition on Mexican photographers chronicling American life, the gallery created a working group of “community curators” culled from local Mexican-American organizations, who provided context and feedback on how the photographs might be presented. And during an installation of an exhibition examining the war in Iraq, it came to the BDC’s attention that one of the soldiers who discovered Saddam Hussein in hiding lived within walking distance from the gallery. This might have presented an opportunity to organize a public program highlighting how global issues hit close to home. However, since he struggled with anxiety related to PTSD, we invited him to participate in a way that would feel most comfortable to him: by having a quiet meeting in the gallery with the Marine and the journalists behind the exhibition, all of whom had also spent significant time in Iraq. 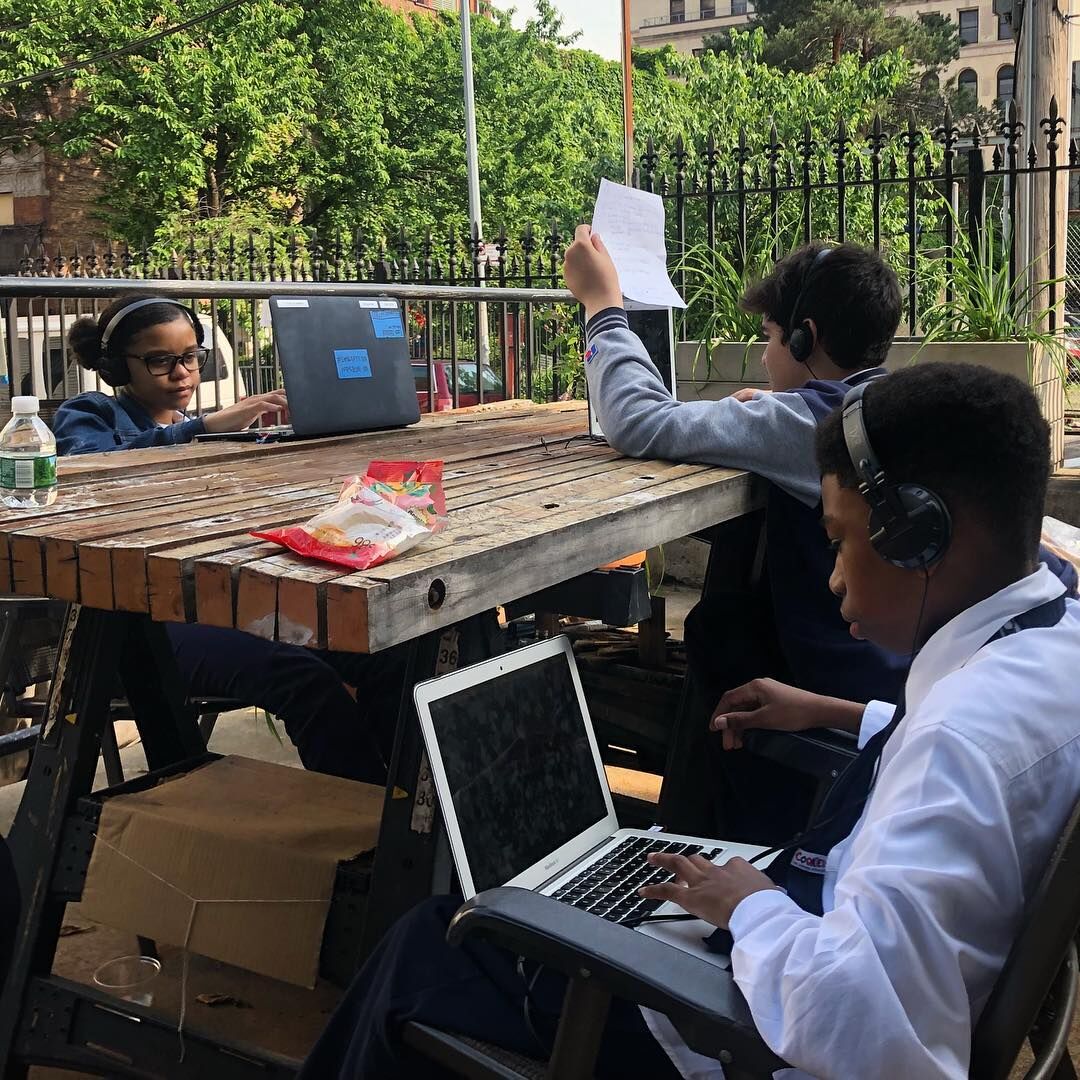 Bronx Junior Photo League middle school students editing audio for their final multimedia projects, which cover a wide range of topics–the conditions of public housing, a profile of Guns Down Life Up, and the story of a retired Bronx firefighter, 2018. Courtesy of the Bronx Documentary Center.

Strapped as they may be, many galleries, museums, and arts projects still have considerable resources to offer that can easily be shared with others. For its first outdoor film series, the BDC borrowed dozens of folding chairs from a neighboring church. In the spirit of returning the favor, the BDC has lent out everything from snow shovels to folding tables for neighborhood parties. Other resources are intangible; in the past, the BDC has helped its volunteers format their first resumés or complete Medicaid forms. While art spaces are not social service agencies, some tasks take a handful of minutes to provide, and fill an essential gap. 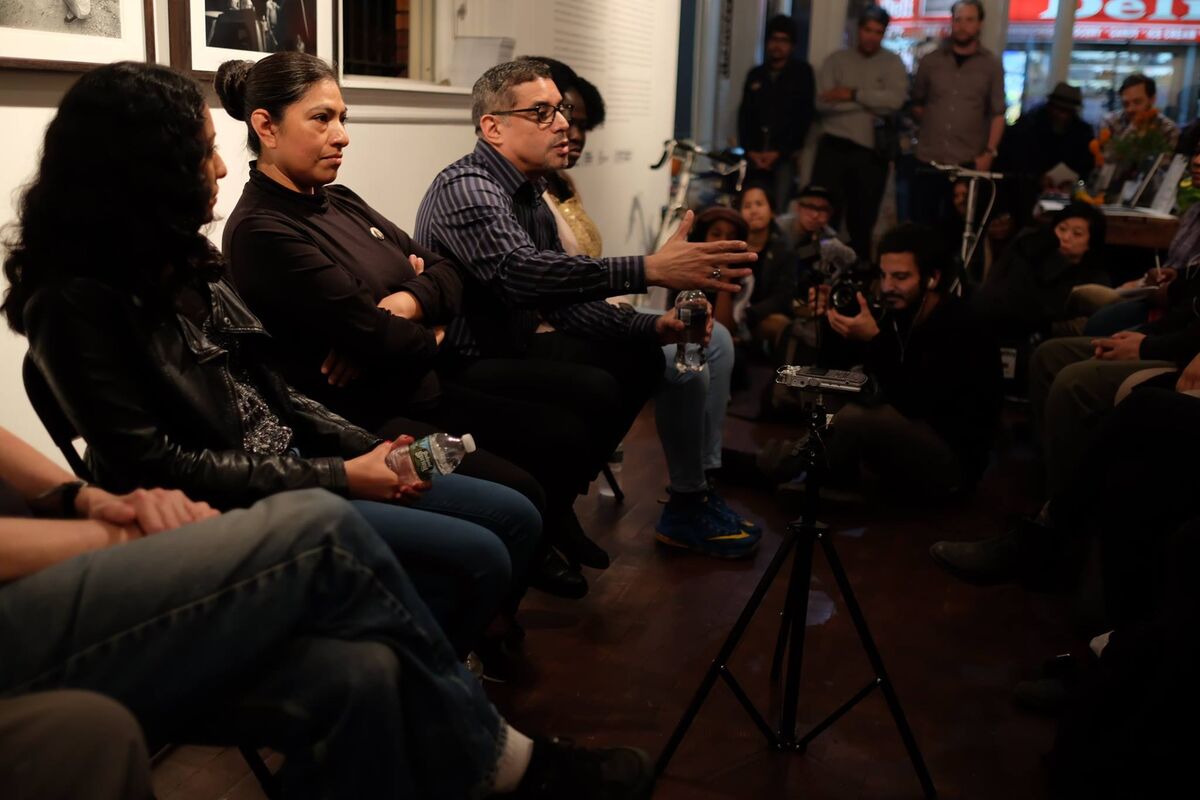 So many public programs around social issues are framed by people who have not lived through the experiences they are fighting to dismantle—but this can be changed. One of my favorite events at the gallery was a post-film discussion with survivors of the notorious Willowbrook State School, who spoke of the abuses they experienced with the help of voice-assisted devices. But one of the most cathartic events at the BDC in recent years was a panel discussion on poverty with master photographer
Eugene Richards
(who has documented poverty throughout his five-decade career) and four members of the BDC’s community. Before a packed house of over 100 people, each person—including a mother originally from Mexico and her eldest child, a social worker, a mother from Mali, and a photographer born in the Bronx—compared and contrasted their experiences raising children, finding educational opportunities, and navigating healthcare. The audience, in turn, shared their own perspectives. In a neighborhood where poverty can be isolating, and people can be suspicious of their neighbor’s perceived advantages, it was an important opportunity to articulate potential coalitions.

Find people where they are 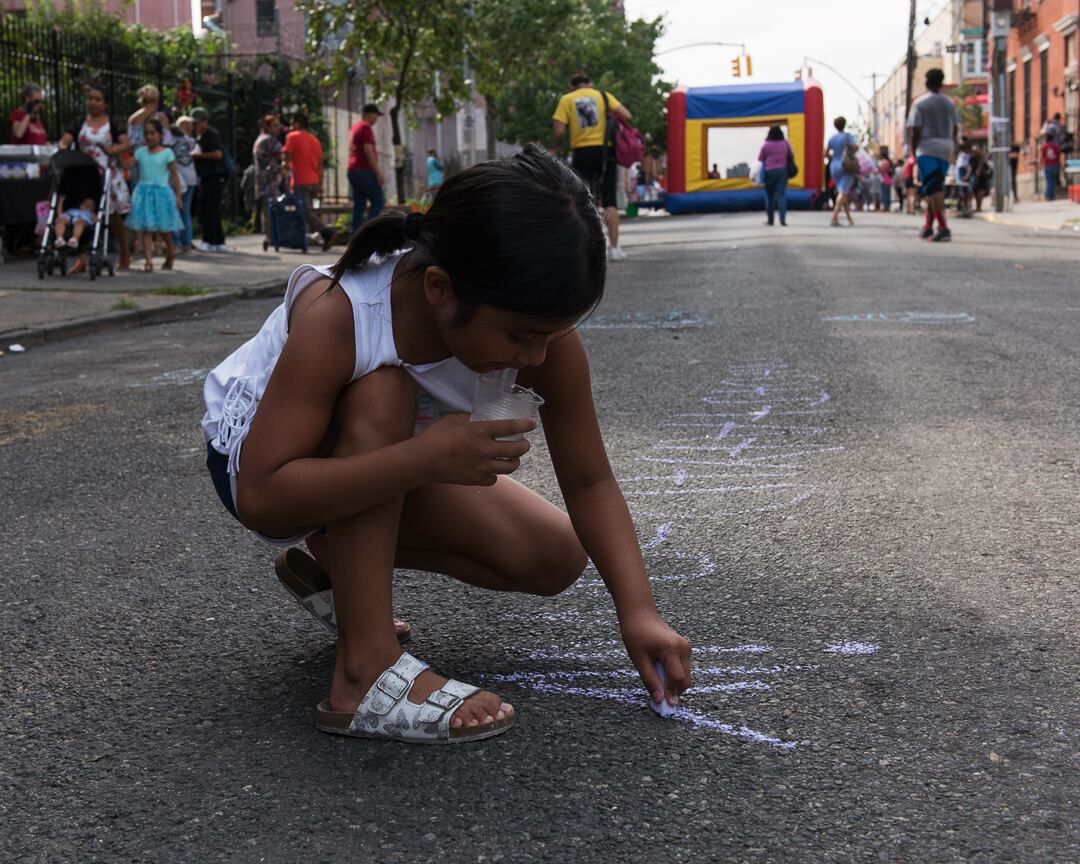 Many arts organizations understandably seek press coverage in high-profile news outlets and art publications. But to cultivate a broader audience—especially one that may not have access to the internet—other channels may be more effective. Instead of printing show cards, Blanka Amezkua, who runs an apartment gallery in the South Bronx called AAA3A, posts notices about her exhibitions on the neighborhood’s light poles, which serve as informal community boards.
Years ago, the Bronx Filmmakers, a local group who met weekly at the BDC, gave a studio interview on WBLS, a black adult contemporary radio station. Within an hour, a number of people stopped in the gallery after having heard about it on the radio. This was an outlet the BDC would have never thought to approach. Although it’s been fortunate to receive coverage in places like NPR or Hyperallergic, the BDC has also made it a practice to pursue coverage by local TV and community newspapers.
Between segregation, political polarization, and technology that filters different information to different people, it can sometimes feel impossible to find common ground. Throughout my time in New York, I’ve witnessed fractious divisions, xenophobia, and outright prejudice of all kinds: Latinos decrying refugees; blacks decrying Mexicans; anti-black racism from Hondurans, Dominicans, and Chinese. I’ve seen class-based anxieties, too-well-meaning professionals and their patronizing assumptions of poor people, and the working-class activists who denounce the middle class. Nonetheless, I am optimistic that, with thoughtful planning and an expansive outlook, art spaces can be beacons of inclusion.
Here is one example, from early on in the BDC’s lifespan. In the summer of 2011, the Bronx Documentary Center hosted “Movies at Sundown,” a summer film series designed to introduce the newly formed organization to the neighborhood. Neighbors welcomed us with their recollections of the building, recalling its past lives as a candy shop, a record store, or the seedy nightclub where, one evening, a car crashed into the façade, prompting the owner to abandon the building completely.
People said it sat derelict for nearly 20 years. The surrounding neighborhood was just three subway stops from Manhattan, yet psychologically isolated from the rest of city. But on this warm August night, a local pastor gazed into the storefront window at a screening of an Oscar-winning documentary film. “You’re bringing the world to the Bronx, and the Bronx to the world,” he said.
Danielle Jackson
Related Stories

Can Only Rich Kids Afford to Work in the Art World?

The Art World Needs to Ditch Its Big-City Snobbery 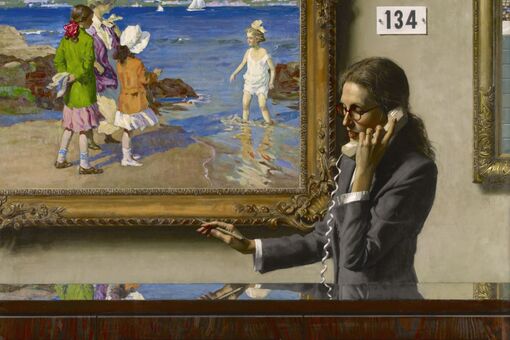 Can Only Rich Kids Afford to Work in the Art World?
Anna Louie Sussman
Feb 14, 2017 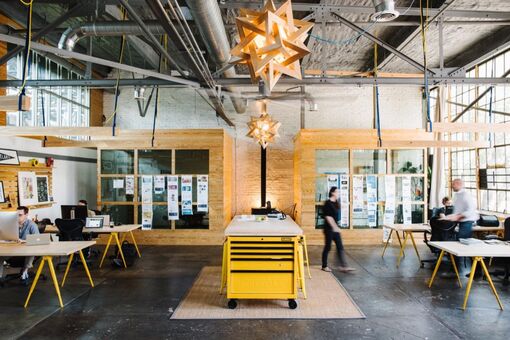 Why the Most Creative Cities Are the Most Unequal
Anna Louie Sussman
May 9, 2017