The Art of Spotting “Sleepers,” the Misattributed Masterpieces That Earn Dealers Millions 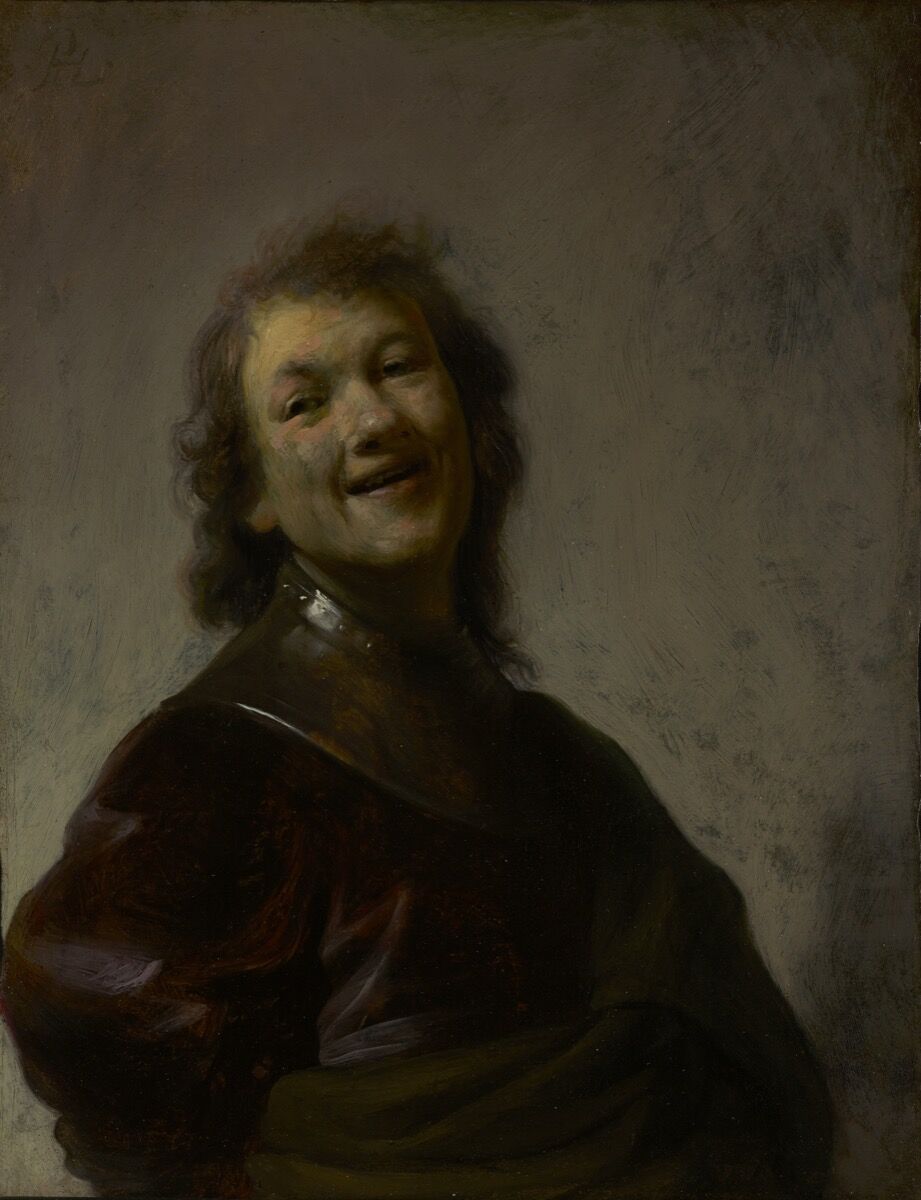 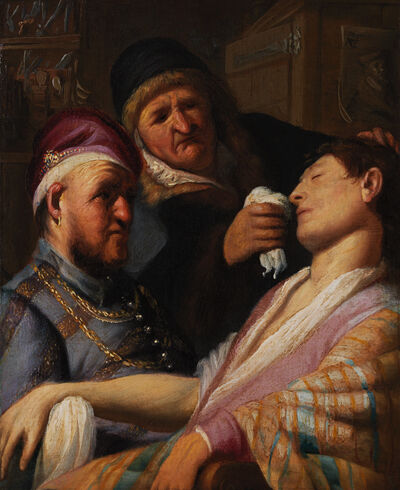 In 2015, Paris dealer Bertrand Talabardon spotted a painting in an online sales catalogue from a small, New Jersey auction house. Listed as a “Continental School” work by an unknown 19th-century painter, the pre-sale estimate was a humble $500 to $800.
Talabardon was pretty sure that was off the mark. As a specialist in Old Master paintings, he could tell that it was an early 17th-century Dutch painting—possibly by a young
Rembrandt
or, if not, by his purported teenage studio-mate,
Jan Lievens
.
Although the photograph in the catalogue wasn’t very good, Talabardon and his partner Bertrand Gautier decided to go for it. Another dealer had the same hunch, and the resulting bidding war drove the price up to $870,000. Talabardon and Gautier prevailed and, almost immediately, received confirmation from Rembrandt expert Ernst van de Wetering that the work was genuine: It was one of a series of paintings of the five senses that Rembrandt made when he was only 18 or 19.
They sold the small oil painting, The Unconscious Patient (Allegory of Smell) (c. 1624–25), to art collector Thomas S. Kaplan reportedly for $5 million—more than five times the purchase price. Now it resides in Kaplan’s extensive Leiden Collection of Dutch Golden Age paintings, one of 11 Rembrandts the billionaire has acquired over the years.
In auction parlance, what Talabardon and Gautier found was a “sleeper”—a misattributed artwork that, because of the oversight of an expert, is priced far below its actual value. A thriving culture has developed around the search for such sleepers. In a sense, all dealers who handle Old Masters, antiques, and antiquities are constantly on the lookout for such works (although they usually call them “discoveries” once they’re identified). They are joined by a handful of museum curators and individual treasure hunters who fancy themselves sleeper-spotters as well.
Most sleepers are found at local auction houses, flea markets, or even carpet sales, where organizers just don’t have the resources to accurately attribute major works of art. But they have been known to pop up at international outfits such as Sotheby’s and Christie’s from time to time. Christie’s South Kensington branch, for example, was a fertile source of sleepers until it closed earlier this year, said Hazlitt Group chairman Brian Allen.
The Hazlitt Group includes the Old Master art dealership Hazlitt, Gooden & Fox, known for its high success rate with sleepers. They’ve discovered works by
Anthony van Dyck
and the Rembrandt self-portrait Rembrandt Laughing (c. 1626), which they bought at an English country auction in 2007 and later sold to the J. Paul Getty Museum—reportedly for tens of millions of dollars. 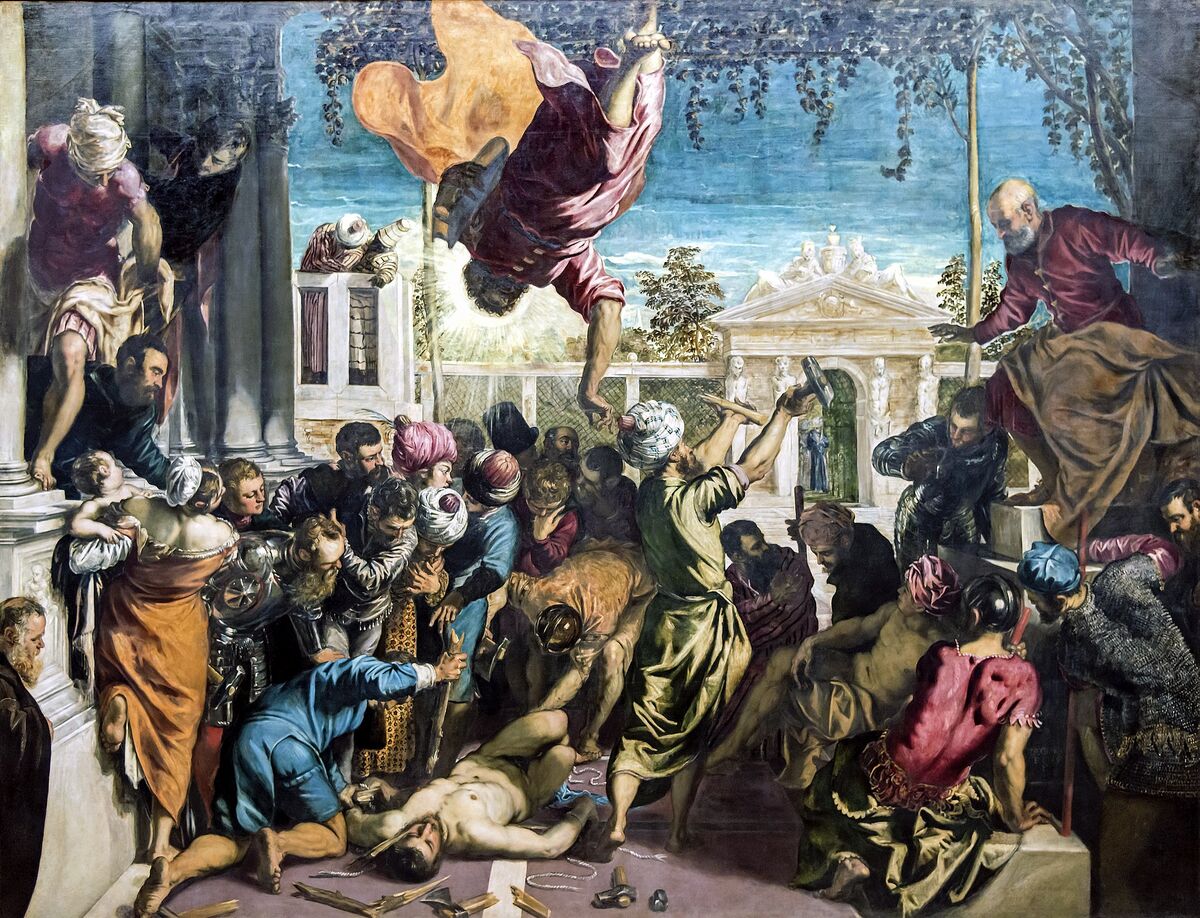 Tintoretto, Miracle of the Slave, 1548. Image via Wikimedia Commons.

The proceeds from sniffing out sleepers used to support a fairly large class of art connoisseurs. These “runners,” as they were known, went in person to smaller auction houses to scout out unidentified or misidentified treasures in order to bring them to the larger auctioneers for vetting—or quickly flip them to dealers or private buyers. But these days, even local auctioneers tend to post sale information and decent photographs on the internet. As the need for a middleman slowly evaporates, fewer and fewer runners can earn a living, said Allen.
Instead, today’s buyers of sleepers are usually established art dealers who spend a great deal of time surfing the web. Talabardon, for example, pores over online catalogues for some 10 hours a day. “It’s like a lifestyle for him,” Gautier said. But there are a few museum curators who are sleeper-hunters, too.
The Muscarelle Museum of Art in Virginia has been able to buy at least eight artworks by major artists over the last few decades, thanks to the connoisseurship of John T. Spike. Currently the assistant director and chief curator of the museum, Spike has identified high-profile sleepers painted by
Peter Paul Rubens
,
Agnolo Bronzino
,
Annibale Carracci
, and, most recently,
Paul Cézanne
. The Cézanne work, The Miracle of the Slave, was unattributed when it was listed by the Dorotheum auction house in Vienna in 2013. Spike, however, recognized it as a 19th-century copy of a 1548 painting by the Italian
Renaissance
artist
Jacopo “Tintoretto” Robusti
. He guessed that it was painted by Cézanne—a theory later confirmed by scientific testing.
Earlier this year, the museum mounted an exhibition titled “The Art and Science of Connoisseurship” that focused on Spike’s finds. The curator confesses to having a photographic memory of all the pictures he’s ever seen, as well as owning a library of more than 7,000 art books and auction catalogues. But the key, he said, to successfully snapping up sleepers for the museum’s collection is the great deal of latitude offered by director Aaron De Groft.
“Other museums have curatorial committees and acquisition committees that meet twice a year,” said Spike. “They’re not sufficiently nimble. I often have four days before an auction to respond if there’s something that comes up,” and he only needs his director’s sign-off.
Gambling on sleepers is one way that a small institution can purchase works of art that would normally fall far beyond its means. “When someone buys a work at auction and he thinks it might be misattributed, I dare to say that that person will never pay the amount that he would pay if the work were correctly attributed,” said Anne Laure Bandle, lecturer in art and law at the London School of Economics and author of a book about sleepers. 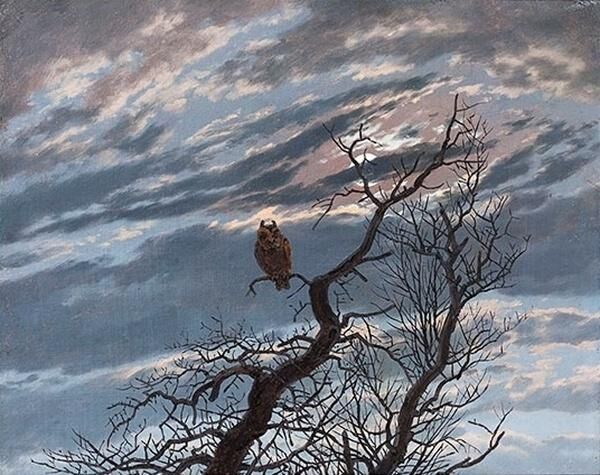 Advertisement
For all the potential upsides, however, every sleeper is a gamble. “There are a few dealers who are specialists in being sleeper-hunters, and they have developed a good eye for online catalogues,” Bandle added, “but they’re taking a risk” because they are betting large sums of money on a work they haven’t even seen in person.
Take Talabardon and Gautier: The Paris dealers have correctly identified works by the Flemish painter
Jacob Jordaens
, the German Renaissance painter
Adam Elsheimer
, and even a picture of an owl in a tree that turned out to be a work by the German Romantic painter
Caspar David Friedrich
(fetched at a Cannes bric-a-brac auction for about $475,000 and later sold for $8.5 million). But not all their purchases are winners—like the $350,000 “Spanish School” painting they were sure was a
Goya
and which turned out to be nothing. “You can make mistakes every day,” said Gautier. “You can win a great amount but you can lose a lot of money, too.”
Successful sleeper-hunters combine connoisseurship, some savant-like ability to recognize images, and a very solid art library. But most importantly, said Gautier, you have to put in the time scanning sales catalogues, looking and looking—oftentimes, not knowing precisely what you’re looking for.
“It’s only curiosity,” he said. “You have to be curious and open-minded, because you don’t know what you’re going to find.”
—Nina Siegal
Related Stories 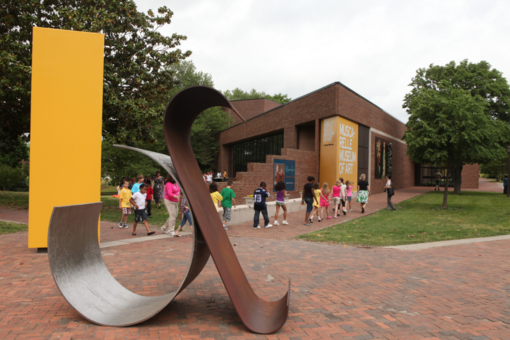 How This Tiny Museum in Virginia Lands Major Shows of Botticelli and Michelangelo
Casey Lesser
Mar 10, 2017