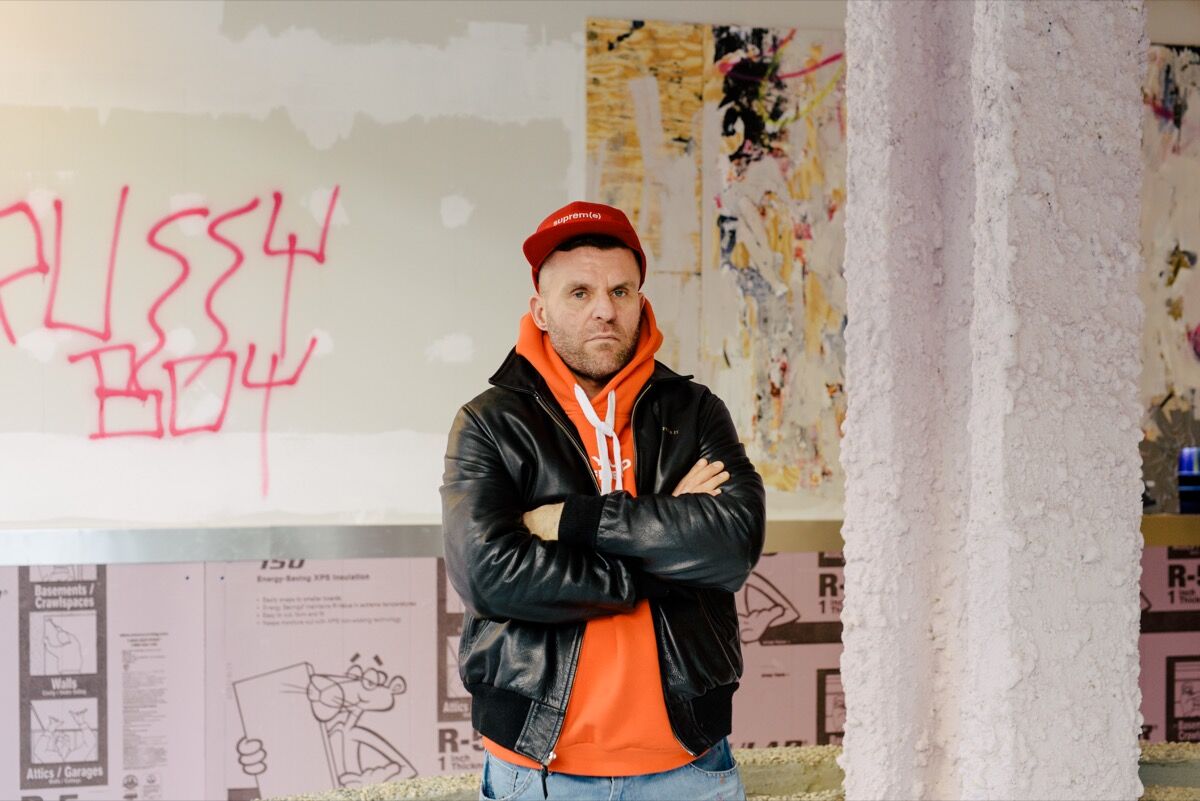 On Saturday evening of New York Fashion Week, a typical art crowd filtered into the Lower East Side location of Gavin Brown’s enterprise, eager to gather around a candy-pink astroturf runway occupied by 15 scampering teacup pigs.
It was the first of a series of fashion week events planned in honor of Norwegian artist
Bjarne Melgaard
’s newest work: a six-collection streetwear line called MELGAARD, which is the focus of a large-scale exhibition, titled “The Casual Pleasure of Disappointment,” at Red Bull Arts New York.
The ethically dubious event at Gavin Brown, held to open the complementary gallery show that runs through February 19th, saw the miniature pigs (rented for the day) wearing bejeweled pendants from Melgaard’s jewelry collaboration with designer Bjørg Nordli-Mathisen. (The show at Red Bull Arts New York is designed like a department store, with the Gavin Brown offshoot acting as its jewelry department.) 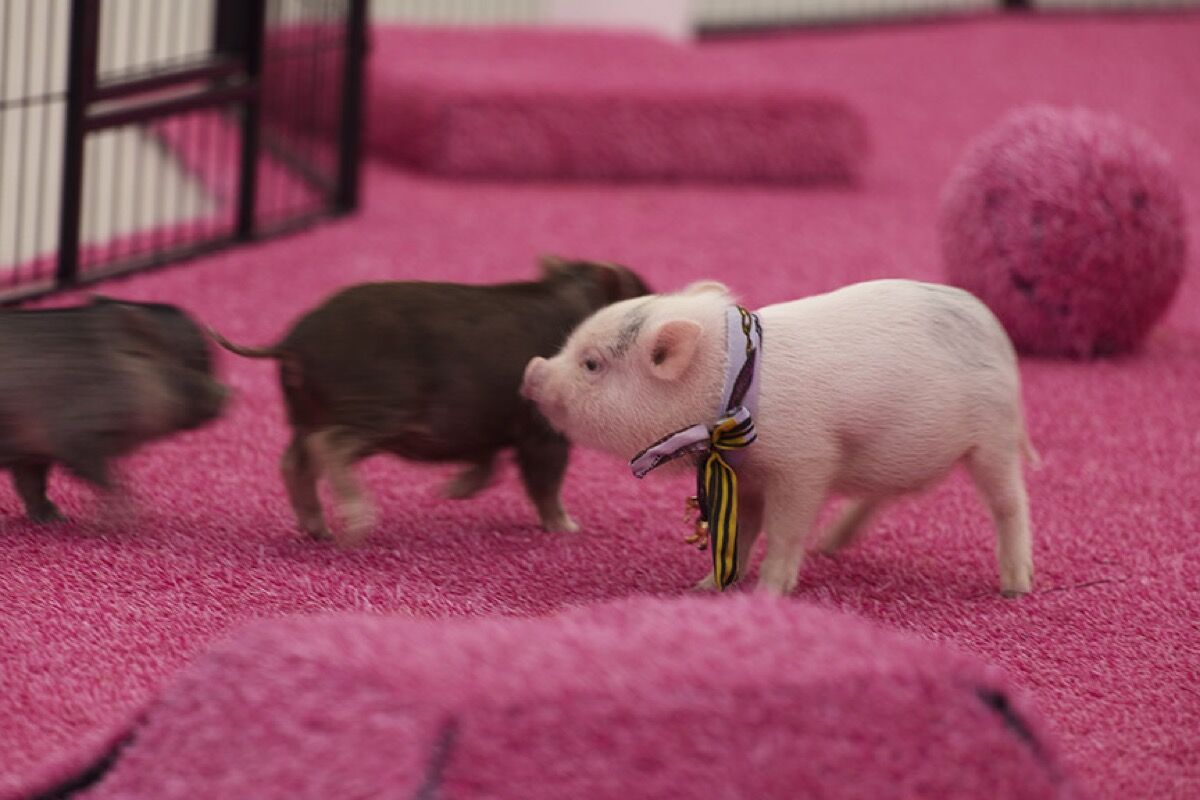 The line, a medley of shimmering necklaces and chokers adorned with pendants encrusted with diamonds, rubies, emeralds, and other precious gems (which first debuted at the Astrup Fearnley Museum of Modern Art in November), was on full display in vitrines nearby. The charms span a chihuahua perched atop a penis, small voodoo dolls, a placard that reads “Pity Fuck,” and surrealist gold lips spouting a lock of blonde hair.
Regardless, nearly all eyes and iPhones in the crowd were glued to the tiny beasts, delighting as the pigs snuggled together in a pile, or playfully tussled. Loud electronic music blared as a technicolored video looped on one wall, cutting between different shots of pigs wearing clothing while dollar bills rained down on them.
“I’ve always been working with mini pigs in my paintings and drawings, so I wanted them to materialize for once,” Melgaard tells me. “They’re cute,” he adds succinctly. Though given Melgaard’s reputation for confessional work that dauntlessly delves into drug use, sexual fetishes, violence, and mental illness—themes that grew out of his experiences as a gay youth in Norway and a successful artist living in New York—it’s not likely that the pigs were chosen solely for their “cute” factor, but rather also for their symbolic associations. 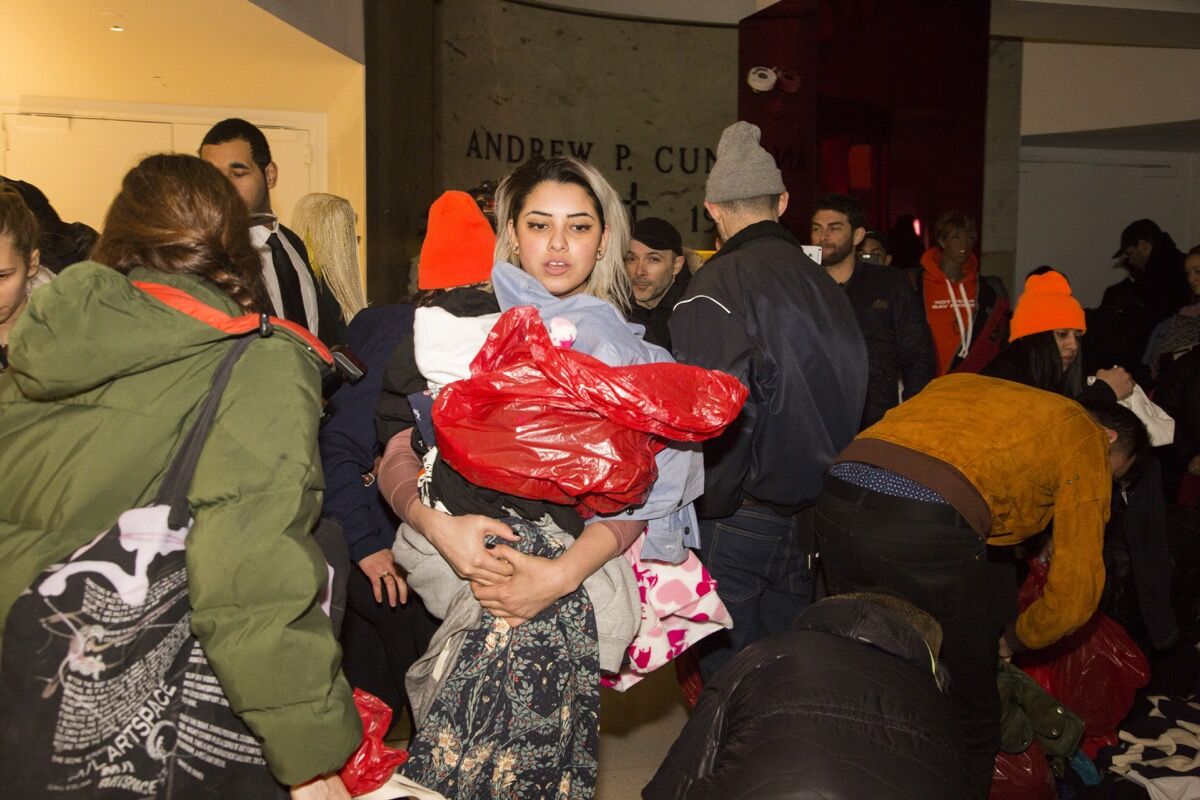 Advertisement
Subversive spectacle has long been central to Melgaard’s artistic career, like the time he recruited two baby white tigers for a group show at Ramiken Crucible in 2012. However, in recent years what’s become more evident is the artist’s dedication to promoting ideas of inclusivity, which is at the core of the six new collections of his streetwear line.
“Streetwear has been corrupted by these professional teenagers that we have, so it was a challenge to put something new into streetwear, because it’s so worn out, the whole terminology of it,” Melgaard tells me as we meet at Red Bull Arts New York, which looks like a retail store that’s been hit by a hurricane or ravaged by a rave. His fashion line responds to the current moment, where young celebrities have fueled an upsurge in the prices of streetwear labels, and fashion houses have dedicated serious resources to “athleisure” lines with equally serious price tags. Given his own predilection for designer clothing, Melgaard saw the potential for a line of his own that could tap into the insecurities people feel, and embrace individuality.
“Fashion is basically living on making other people feel inadequate,” Melgaard continues, “and with my fashion I want people to feel like they’re representing something valuable—something that has some values.” It’s for this reason that he’s designed the pieces, including sweatshirts, jackets, t-shirts, and sweatpants, without a particular audience or demographic in mind, and priced them on the range of $50–$500. 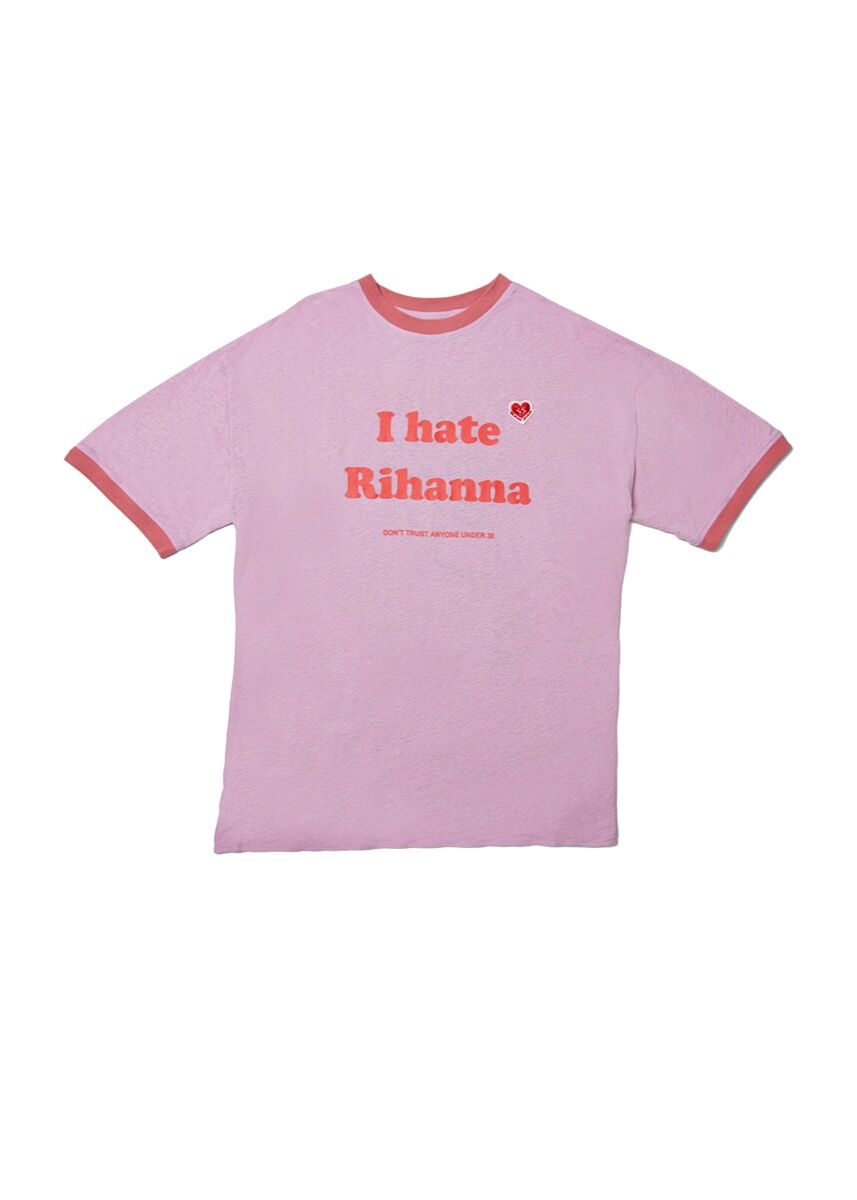 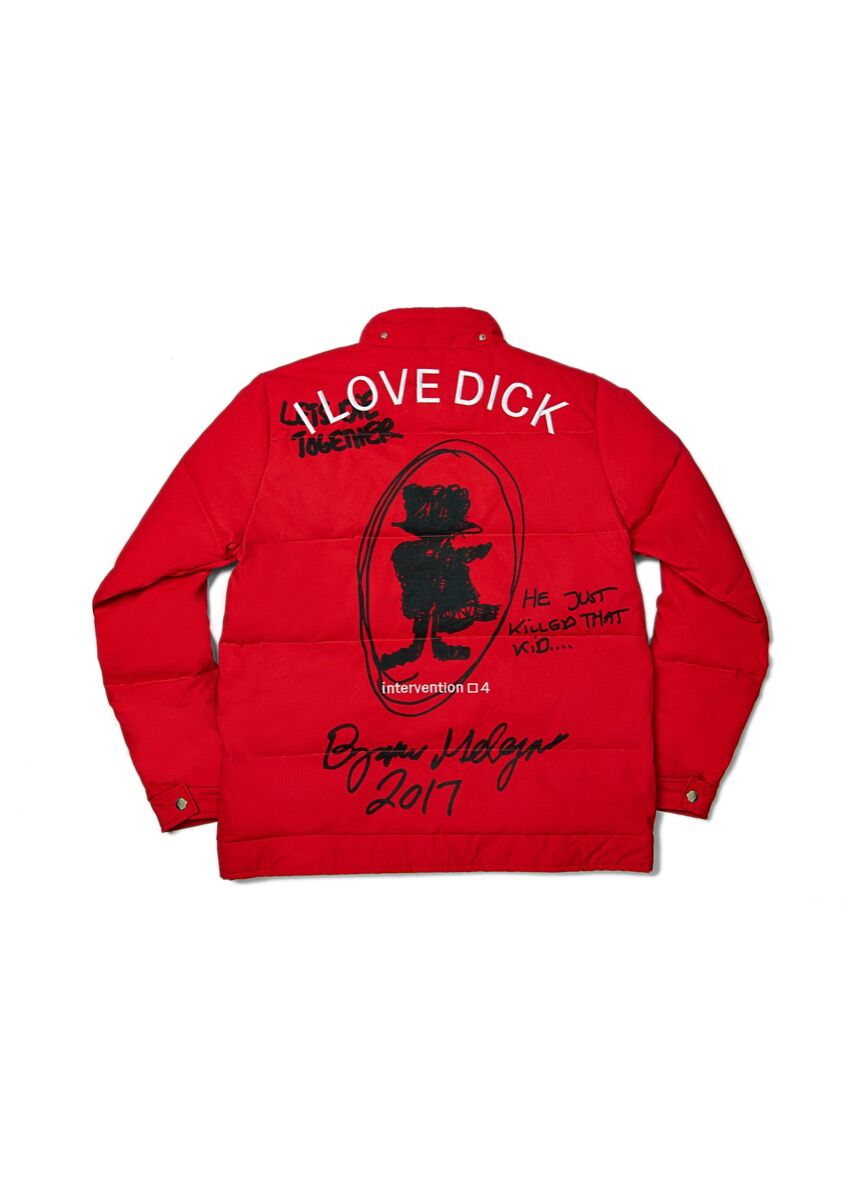 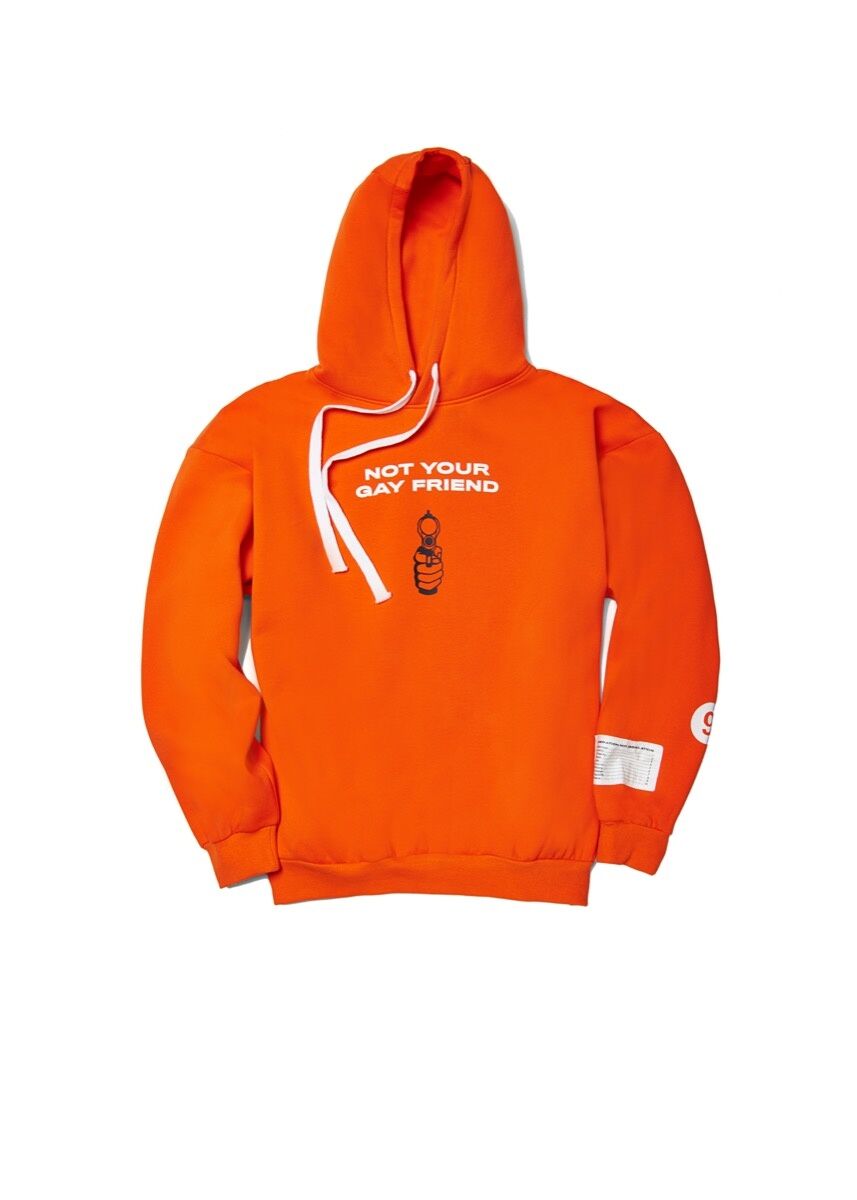 Melgaard produced the exhibition over the past six months in collaboration with creative director Babak Radboy. Though the focus of the show will be over 100 mannequins wearing MELGAARD clothing, in looks designed by stylist Avena Gallagher, the show also includes a video of a muppet modeled after Melgaard created with the Jim Henson Company, and several of the artist’s paintings and sculptures “as decorations,” the artist says.
Though the non-commercial space of the energy drink corporation has been known to put on high-production-value exhibitions, for Melgaard’s show the finished white cube space has been wholly unfinished. The walls appear to be stripped down to sheetrock and insulation foam, which is inconspicuously printed with the Pink Panther—a signature Melgaard motif; he’s related to the character since childhood.
Several walls are plastered with pastel-colored shredded posters, the main stairwell has been converted into an escalator gone haywire, and the lower-level space has been covered in plush burgundy carpeting. Billed as a “psychopathological department store,” the space is first and foremost meant to showcase his streetwear.
“It’s different themes that aren’t really being used for streetwear,” Melgaard says of inspirations behind the line, which include the gay anarchistic group Bash Back, or Narcotics Anonymous memorabilia that he found online. He’s adapted the Narcotics Anonymous logo as an emblem for MELGAARD, which can be seen on a pair of black sweatpants that are also printed with the word “Relapse” down one leg in block letters.
Another collection, called “Hating Rihanna,” is comprised of t-shirts bearing that moniker, and below it, the words “Don’t trust anyone under 30” are written in fine print. “That is a comment on youth culture in general,” Melgaard explains, nodding to the ideals that Rihanna represents. Chris Kraus’s 1997 novel I LOVE DICK, and its publisher Semiotext(e), inspired one collection, which includes a hat embroidered with “Suprem(e)” in a cheeky jab at Supreme’s popular baseball caps.
As we speak, Melgaard is sporting one such hat and a bright orange sweatshirt that reads “Not Your Gay Friend,” above an image of a hand pointing a gun. He hopes that the pieces will inspire people to “feel better about themselves, their life, and their world.”
Ahead of Thursday’s opening of the show, Melgaard is staging an event he’s dubbed “The Purge,” which takes place on Valentine’s Day. Interested parties will be herded into the Red Bull space in groups of 100, where they will have five minutes to snag items from Melgaard’s personal wardrobe—pieces from Eckhaus Latta, Issey Miyake, Yohji Yamamoto, and others—as well as MELGAARD items. 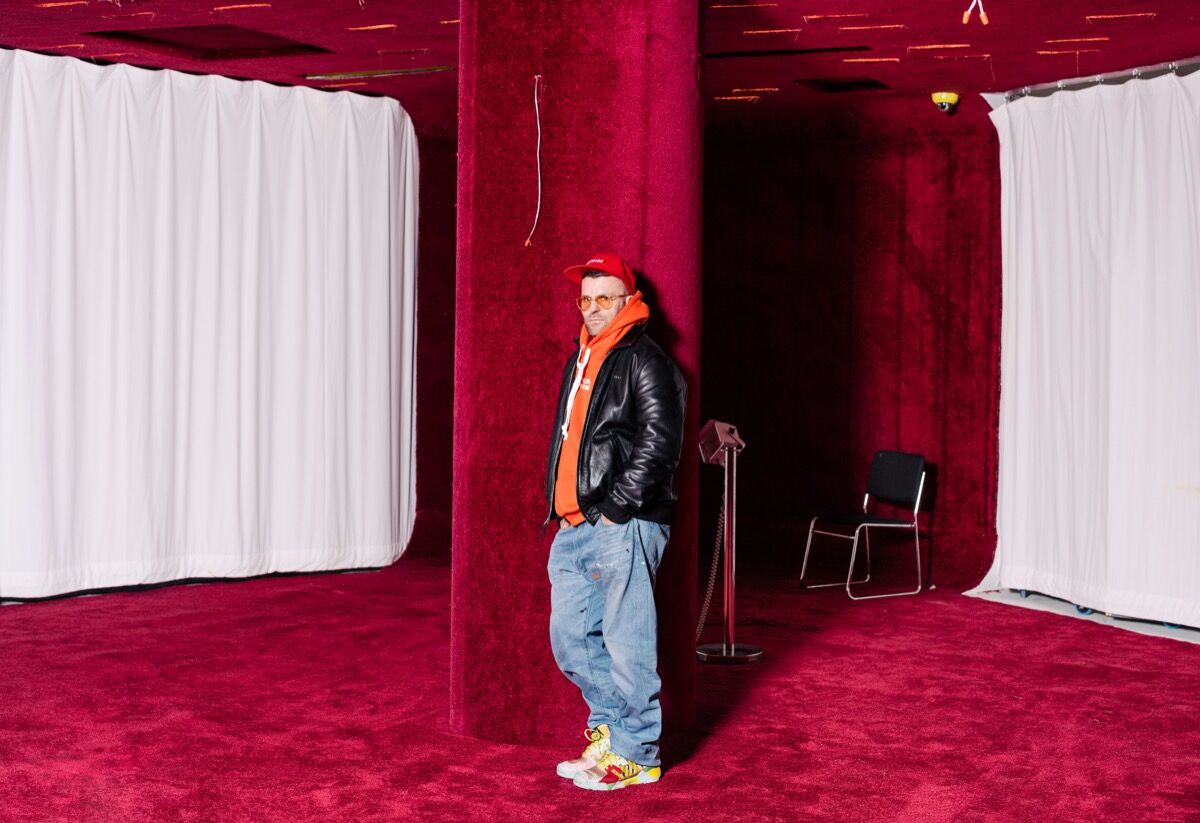 “It’s an idea of how to recycle old things,” Melgaard says of The Purge. “A part of the collection is also pieces made out of my old clothing. You don’t have to make new things all the time, you can take the things already there.”
While pushing against the expectations we have for artists to routinely churn out new work, Melgaard has also subverted expectations by embracing streetwear as his new choice medium. Though despite this, he’s by no means signaled a career change. “I don’t know what I will do in the future,” he says.
“For me, it’s all part of one thing,” he continues. “If I do fashion, painting, drawing, sculpture video—I just see it as one big gesamtkunstwerk. I just see it as one big piece I’m working on constantly.”
Casey Lesser is Artsy’s Lead Editor, Contemporary Art and Creativity.
Related Stories