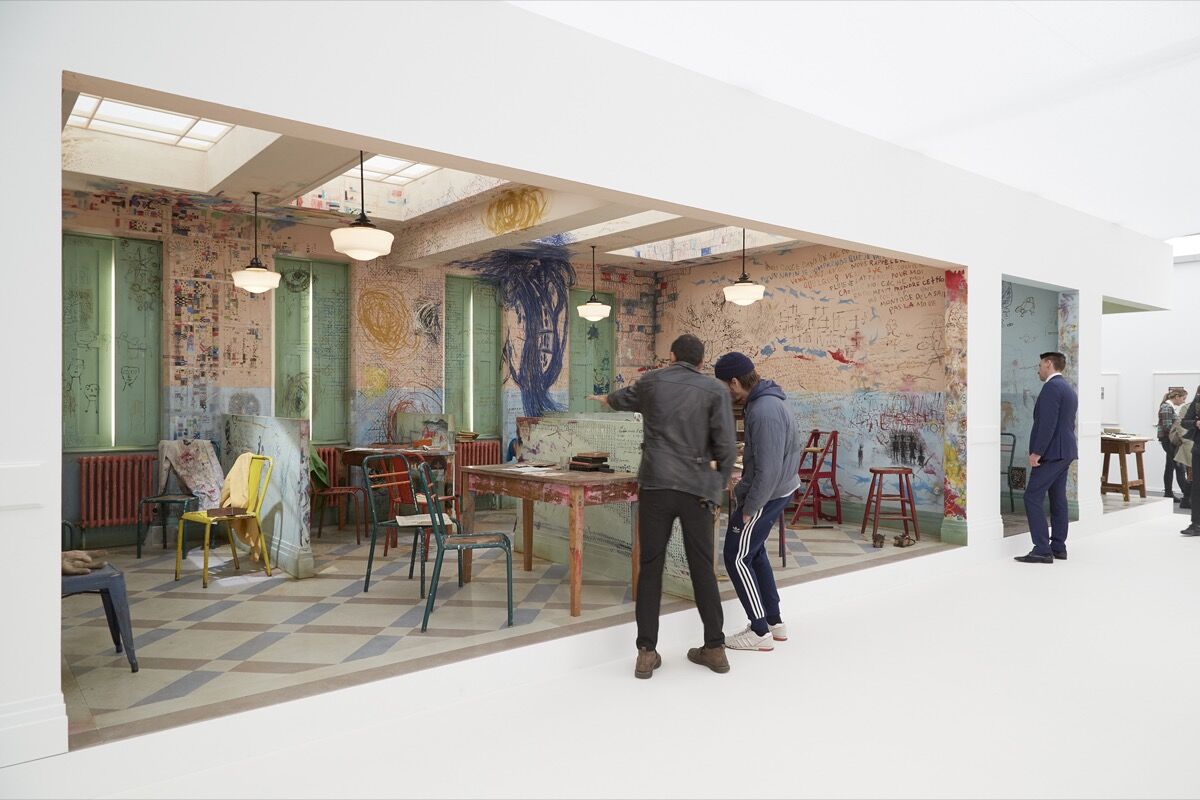 To some, art fairs bring together all the worst features of the art world—brazen mercantilism, snobbery, and a profusion of air-kissing—typically under the dismal lighting of a convention center boasting all the charm of an airplane hangar. But industry insiders say that art fairs can in fact be one of the best places for a new collector to hone an eye for art; both because of the sheer quantity of it on display, and the extracurriculars: the educational programming, collection tours, and socializing that surround the major fairs.
From international art fairs like the Art Basel, TEFAF, and Frieze franchises to regional powerhouses like The Armory Show, Art Cologne, and FIAC, major fairs typically feature booths from between two and three hundred dealers. This can make them overwhelming for a new collector—but also particularly fertile ground for starting or building upon a collection. For those that might prefer a more concentrated experience or are interested in delving into a particular medium (like prints and works on paper) or style of art, there are hundreds of local, regional, and specialty art fairs in between.
So how should a new collector navigate these fairs? We asked three art world veterans each with decades of experience navigating art fairs around the globe for their advice on how to get the most out of the experience.

British-born art dealer Sean Kelly opened his first public gallery in New York in 1995. He now represents established and mid-career artists such as
Marina Abramović
and
Shahzia Sikander
, and typically participates in six to eight fairs per year. His advice to new collectors is pragmatic: Begin at the beginning.
“Get the floor plan,” he said, and navigate the fair systematically, noting on your map what you like and don’t like, what you respond to and what barely registers.
“You’re surrounded by tens of thousands of objects,” he says. “Going to an art fair is about educating your eye.”

Take that list and go over it again, editing it until you have a shortlist of, say, 10 to 20 booths, then revisit them and begin asking questions. If the person in the booth isn’t receptive, Kelly says, don’t take it personally—in fact, consider it a warning sign that this is not an institution with which you’d want to enter into a long-term partnership.
“One thing we don’t talk about as much as we should, but experienced collectors understand very, very well, is when you are making a commitment to an artwork, you are to no small extent making a commitment to that gallery,” he says. “Any gallery worth its salt should be more than happy to spend some time with you and explain things to you and be open and approachable about having a discourse about the art.”

Kelly also advises asking about additional inventory. Many new collectors may not realize that what’s on display is just the tip of the iceberg. If you like a certain artist, see what else the gallery may have by that person, and ask for the artist’s biography or CV and the business card of the person helping you.
Listen and learn from them, he says, but be wary of people counseling you, and when it comes time to buy, follow your heart.
“Do your research, do your due diligence, but buy something you love, because you’re going to live with it.”

Go to learn, not to buy

Alain Servais, 53, went to his first art fair in 1994, when he was 31. More than two decades later, the Brussels-based collector estimates he’s been to over 1,100. Despite the reams of objects on offer, he says, the worst mistake a new collector can make is to approach an art fair with the intention of bringing something home.
“Go there to learn, don’t go there to buy,” he says. “You want to enjoy the art.”
Learning, he emphasizes, should be an ongoing process—museums, galleries, books and even classes are key to going into an art fair and feeling comfortable. Early on in his collecting career, he snuck into an art history course at La Cambre, a university near the office where he ran a trading desk. He sat at the back of the lecture hall, but asked enough questions that he soon made his unauthorized presence conspicuous (luckily the professor invited the rogue student to remain).

Check precedent as much as provenance

Not knowing art history, Servais cautions, also puts a new collector at risk of buying work that’s derivative or out of step with its moment.
A new collector might see a painting or sculpture and think “Oh, this is so smart, this is so original, but someone’s done that 50 years before,” he says. “That’s $50,000 or $100,000 thrown down the drain.”

But mistakes are inevitable, he says, and perhaps even desirable. As with parenting or other processes in life, “mistakes are part of the experience” through which one learns. That is, however, one reason to go slowly at first.
“It’s always better to start collecting with little money, because little money means little mistakes. And big money means big mistakes,” Servais said. Above all, he said, remain focused on the art itself, because it can, if you’re open to it, change your life.
“You will feel whether you have that curiosity,” he says. “This is not just another luxury object. This is something special.”

Know what kind of fair you’re going to and why

Benjamin Genocchio, executive director of The Armory Show, covered north of 150 fairs in his previous life as an art critic, reporter and editor. He divides art fairs into two main groups: the art fair as experience and the art fair as marketplace. Both can be useful starting points for new collectors, but it helps to first understand which is which and how that aligns with your intentions as a collector.
Frieze New York, for example, is held on Randall’s Island Park, a ferry ride away from Manhattan, making it more of an “experience”—it features specially commissioned performances, high-end food stalls from some of the city’s most popular restaurants, and a more curated, unified look and feel. The Armory Show, by contrast, is more of a marketplace, not just for the trade of a diverse range of objects, he said, but also for the establishment of new relationships with the wide swath of dealers who sell them.

“A big part of the value of the art fair is as a meeting point for people,” Genocchio says, since they draw people from all segments of the art industry and all corners of the globe.
He suggests taking advantage of the social opportunities available at fairs—the talks, studio tours, collector dinners, parties, and plain old serendipitous meetings—to max out on potential networking. Speaking with experienced collectors, for example, can be extremely helpful for someone just starting out.

Don’t be afraid to ask for a price

As for approaching dealers, he says, simpler is better. If you see a work you like, start by asking how much it is, since there’s no point in wasting your or the dealer’s time if it’s not in your range. In fact, he says, the forthrightly commercial nature of fairs can make them, in a way, more democratic than the hushed, white-cube atmosphere of a gallery, or the reverent halls of a museum.
“Art fairs tend to be fairly welcoming spaces,” he says. “The key is to not be intimidated.”
Anna Louie Sussman
Related Stories