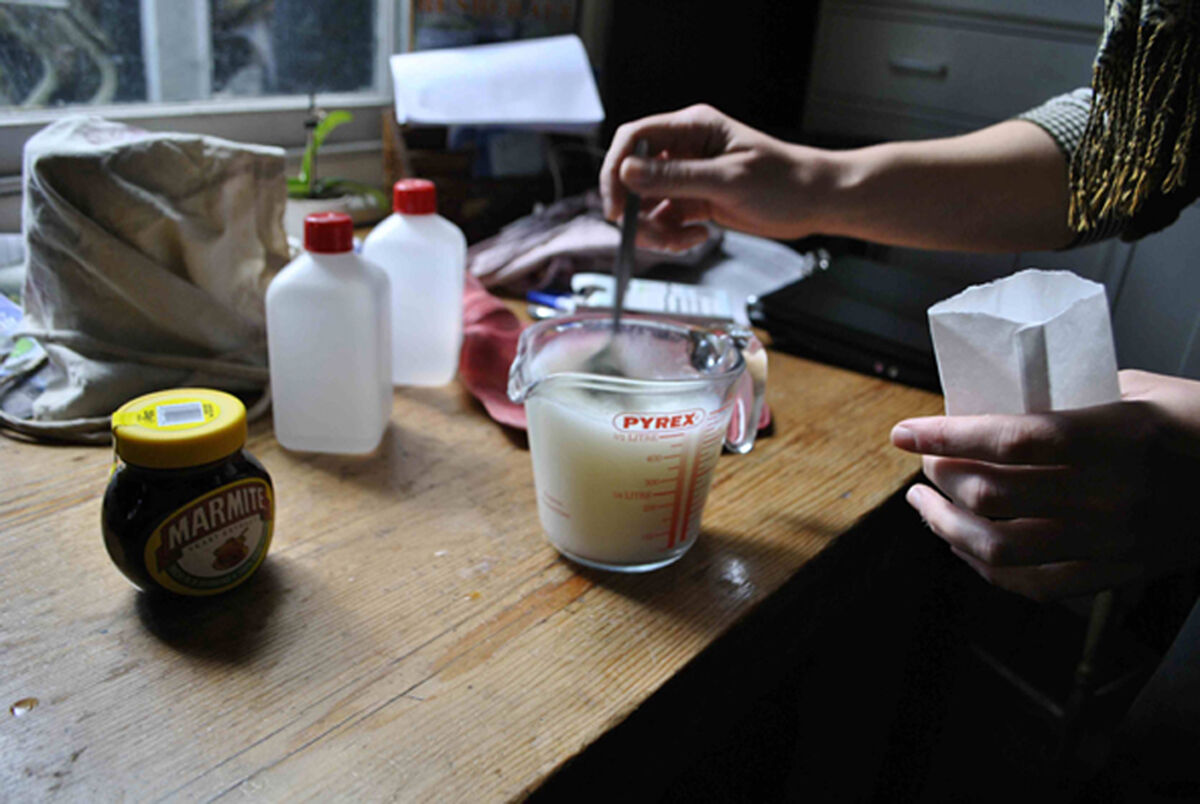 At Berlin’s Büro BDP art space, I’m handed a cup of biting, effervescent kombucha. The glass bursts with thousands of microbes that are invisible to the eye—although, if you place your ear close to the rim, you might be able to hear them hiss. The small space is packed with the city’s art crowd, spilling out the doorway. We’re here for the Berlin edition of “Fermenting Feminism,” a touring program of artworks that take the theme of fermentation, which is having something of a cultural moment across the culinary and art worlds of Europe and the U.S.
It wasn’t always like this. In these parts of the world, fermentation—a metabolic process through which an organic compound is broken down into smaller molecules—was, until relatively recently, an obscure practice. (In contrast, Asian countries have always embraced fermented foods in their cuisines.) A squeamishness to the process is perhaps understandable given that its components can be incredibly weird. At the time of writing, I have a jar of deep-yellow kombucha brewing on my desk, with what is known as the SCOBY, or “symbiotic colony of bacteria and yeast,” floating inside. These otherworldly rubbery discs, with their dangling tendrils, are pallid and strange, and certainly don’t give the appearance of being edible.
But attitudes are changing. We now understand that our guts are filled with microbial life, and that fermented foods may help us to replenish our internal ecosystems. The salty tang of kimchi, the umami crunch of sauerkraut, and the exuberant fizz of kefir can currently be found everywhere, from health-food stores to startup cafeterias. 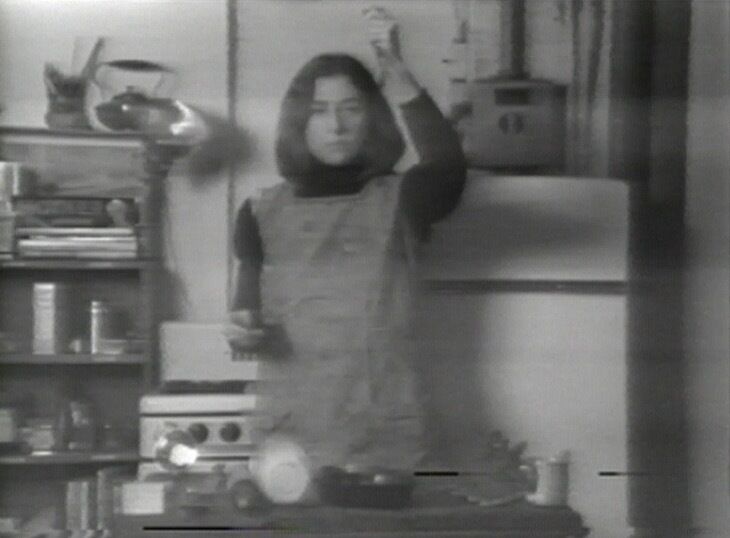 Martha Rosler
Semiotics of the kitchen, 1975
Arton Foundation
And in a similar vein to
Anicka Yi
, whose experiments with cultivating yeast and bacteria have won her acclaim, contemporary artists are turning to fermentation. For Lauren Fournier, curator of “Fermenting Feminism,” bacteria can help us to think through the questions raised by, as she puts it, “contemporary, intersectional, trans-inclusive feminisms.” Her program includes disparate approaches to fermentation, like bio-artist and self-described “witch in a lab coat” WhiteFeather Hunter’s blóm + bló∂ (2016), in which foraged petals and the artist’s piss become raw materials. Or Leila Nadir and Cary Peppermint’s Probiotics of the Kitchen (2017), a video in which a woman is seen slowly and carefully preparing sauerkraut in a monochrome kitchen (a nod to
Martha Rosler
’s seminal feminist parody, Semiotics of the Kitchen, 1975).
Certainly, the metaphorical applications of fermentation are vast. It is an act of preservation, in that fermenting fortifies a substance against mold, but it’s also one of transformation, often drawing out new and complex flavors. It also makes food more accessible to the body’s digestive system, breaking down cell walls—resonant at a time when, in the world at large, new border walls are going up. 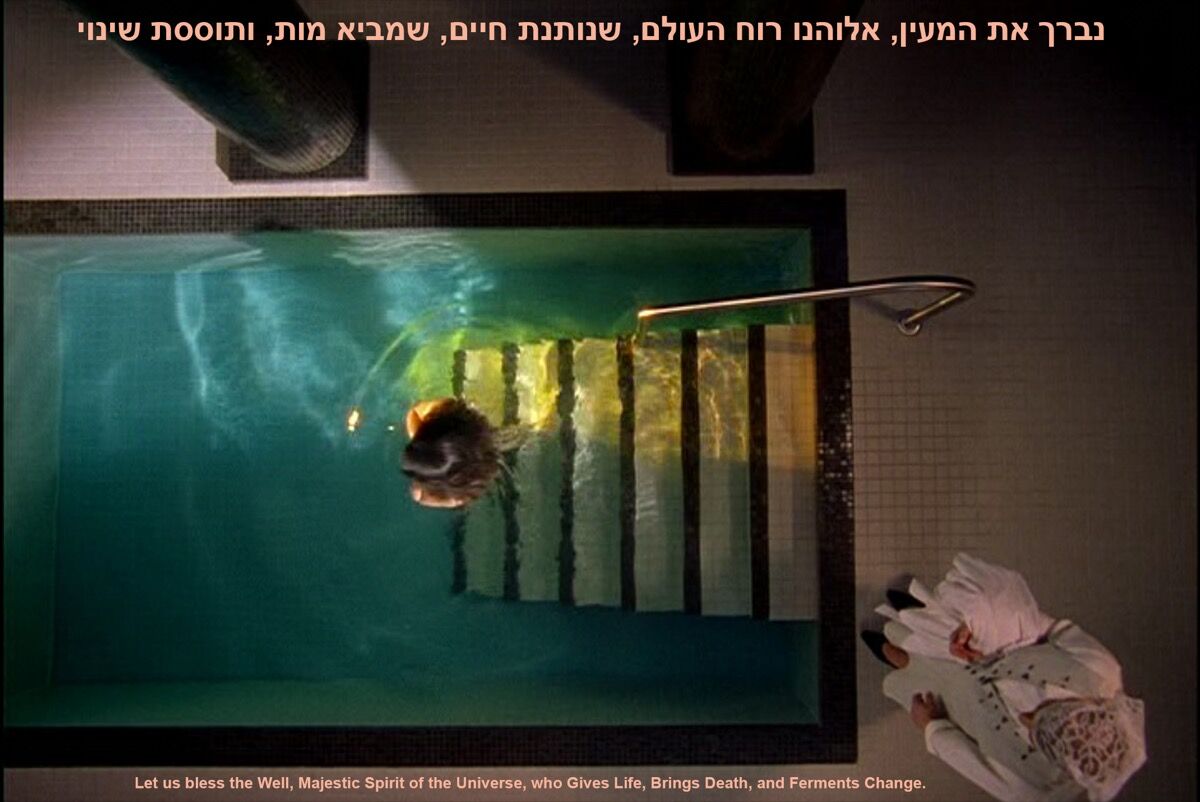 Advertisement
Much as a country is never a monolith—instead made up of myriad cultures and languages—neither are our bodies. Our gut flora, the microbial ecosystem that calls our intestines home, does much more than strengthen our immune systems. It also, we’re starting to learn, affects our moods and influences our decisions. Our lives are not a monologue, but rather a dialogue with other species.
The hybrid nature of fermentation is explored in the work of San Francisco-based artist Nicki Green (who is also included in “Fermenting Feminism”). In her short film, Blessing for Fermentation (2017), she alludes to the practice in order to explore her identity as a Jewish trans woman. Using the mikveh—an immersive ritual bath in Judaism—as a stand-in for the fermentation jar, Green immerses her body in the bath’s waters. Like soaking vegetables in brine, to be submerged in “the container of life-giving waters,” as she puts it, is an act of transformation. “What’s happening in the crock is also happening in the mikveh,” she told me via email.
Resisting fixed identities is, for Green, an inherently queer act; fermentation mirrors the fluidity of gender and sexuality. “There’s also this abjection to ferments,” she says, “[and] the idea that you’re consuming ‘rotten’ or decomposing food speaks to the way that queer and especially trans people are treated by a lot of the world.” 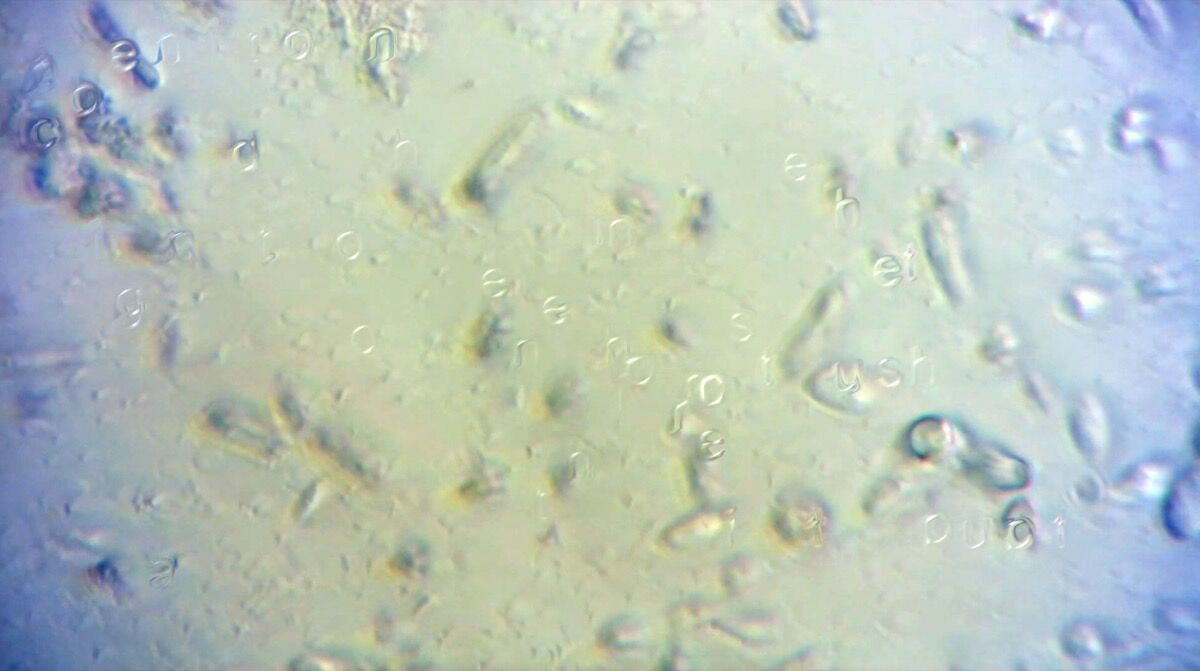 Jenna Sutela, still from Nam-Gut (the microbial breakdown of language), 2017. Courtesy of the artist.

Fermentation is employed to different effect in
Jenna Sutela
’s Nam-Gut (the microbial breakdown of language) (2017). In this short film, shot through the lens of a microscope, we take a bacteria’s-eye-view at a batch of brewing kombucha. A wash of blue-green bubbles and wiggling microbes, the film decodes these movements into a sonic landscape of almost-words, hums, and crackles. In inviting these microbes to speak, to become part of the conversation, Nam-Gut disrupts human supremacy, encouraging an openness to the psychedelic weirdness of non-human lifeforms.
Aside from her experiments with kombucha, Sutela has also been regularly ingesting slime mold, turning her own body into an instrument for its expression: “I’ve been thinking of it as a sort of AI,” she says, “letting it operate me.” This is, she admits, a little strange, perhaps closer to science fiction. But it also underscores the idea that our bodies are permeable to other species, as well as to our environments.
Elsewhere in the art world,
Philippe Parreno
recently filled the vast Turbine Hall at London’s Tate with his work Anywhen (2016–17). It featured yeast colonies, which Parreno turned into the conductors of an ever-changing symphony, enabling them to control a shifting constellation of objects, sounds, and lights. Roof sensors registered climatic conditions—whether heavy rain or, less likely in London, blistering sun—and fed the data back to the yeast through a computer. This was then relayed to the wire-suspended objects, setting them into motion. Through his bio-choreography, Parreno illustrated the interconnectedness of all things.
These artists are thematically and stylistically distinct from one another. Yet their experiments in fermentation point to a consistent desire to embrace our biological complexity and entanglement. The world is sticky and messy, ripe with a musty funk. We humans do not sit at the center of it all; we are one part of a grubby assemblage. We are plural rather than singular—and sipping on sour kombucha, or placing fat chunks of kimchi between our teeth, is a delicious kind of surrender.
Siobhan Leddy
Related Stories