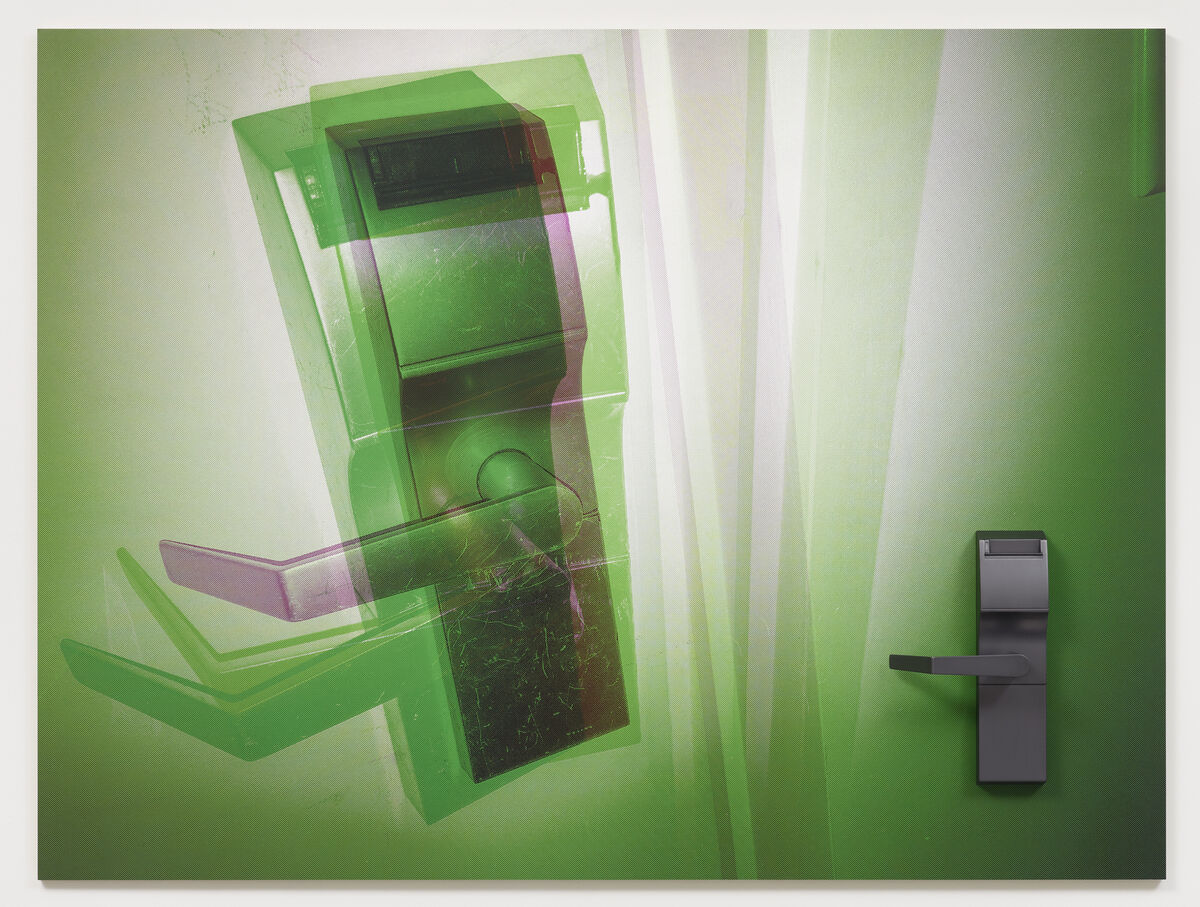 There was an early sign that perhaps not all passersby would immediately understand the new artworks filling the glass lobby of Lever House on Manhattan’s Park Avenue. A few days before British artist
Adam McEwen
’s show opened there late last month, a man entered the lobby, walked up to the large graphite sculpture of a safe he had installed at the center of the space, and climbed inside it.
“It’s the most beautiful modernist space in the city, but it was not built as an art place,” McEwen said during a conversation at his Long Island City studio. “This is not somebody going into MoMA and getting into a sculpture. This is someone who’s like, ‘I just walked in off Park, why shouldn’t I do this? Who told me not to?”
McEwen added: “I kind of sympathize with the person. Nobody said it was art. Maybe they have a darkened space fetish.” 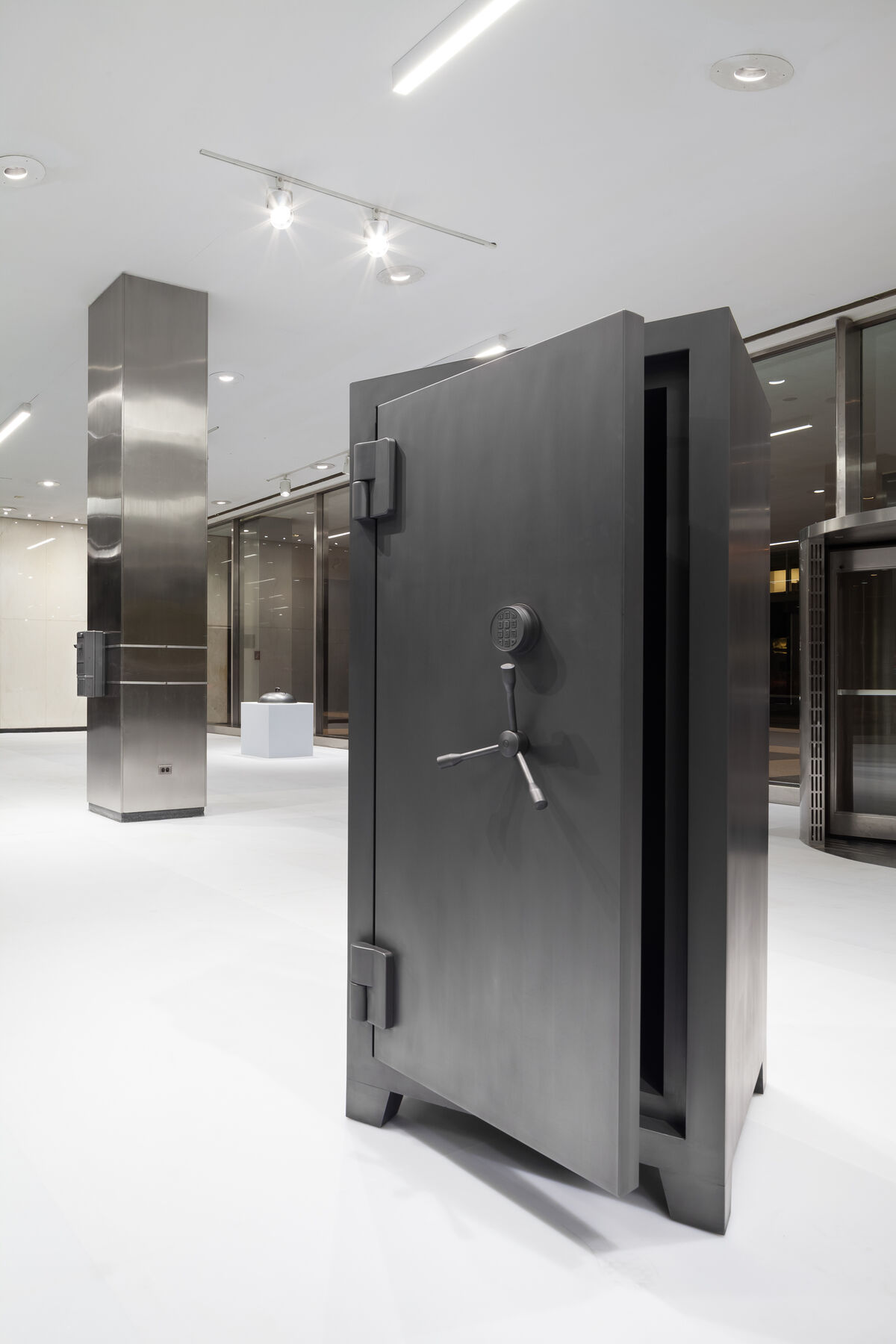 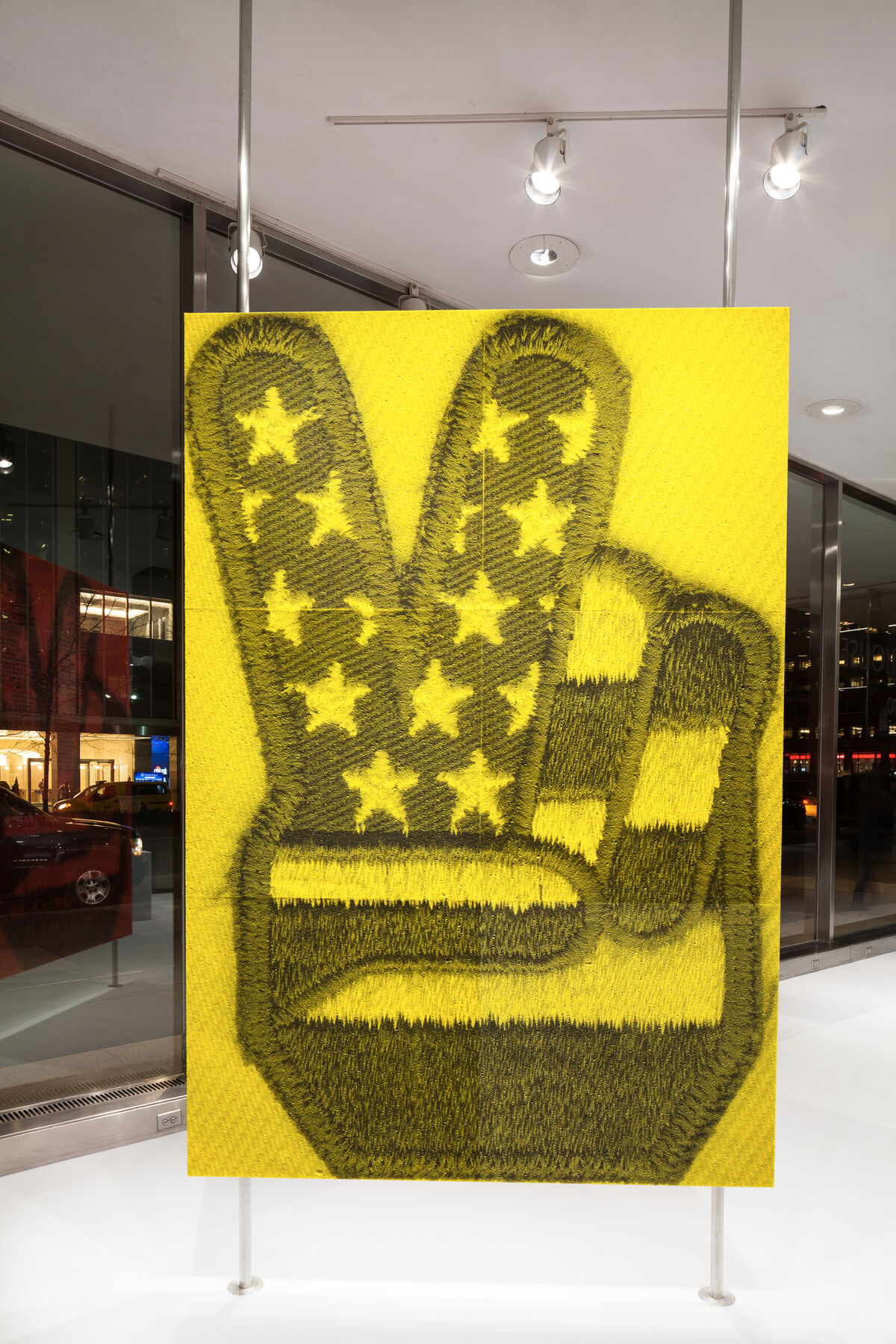 McEwen’s light-touch approach to
conceptualism
and fluid understanding of what makes an object art has been amusing and puzzling the art world since at least 2003, when he started making text paintings that consisted of obituaries of living people, all sharply written by the artist (who worked as a professional obituary writer in the 1990s). One, from 2004, begins: “Bill Clinton, who has died aged 58, was the 42nd President of the United States, the self-styled ‘Man from Hope’ whose life both enchanted and appalled his nation.” The work can be off-putting; he once filled all three feet of outward-facing exhibition space at Wrong Gallery,
Maurizio Cattelan
’s tiny project space, with a sign that said: “FUCK OFF WE’RE CLOSED.”
But between the show at Lever House—which was commissioned by super-collectors Aby Rosen and Alberto Mugrabi—and a beguiling new exhibition at Petzel Gallery’s uptown space, McEwen has turned his cheeky, unflashy works into something endearing to both art-world insiders and intrigued people passing by on the street. 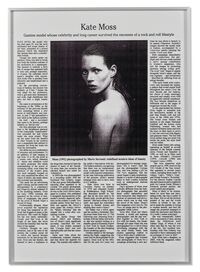 3 Images
View Slideshow
Advertisement
“It’s an interesting feeling to have two different sorts of lenses up at the same time, something refracting in two different ways at the same time,” he said. “It’s like an escape clause: If you hate this, you might like this! If you think this is shit, try this!”
McEwen said he made the decision to push the show at Petzel back so the two exhibitions could be in dialogue. The nature of the exhibition spaces sets the tone for each show: One, on the second floor of an Upper East Side townhouse, must be accessed via a buzzer; the other, filling the lobby of a famous
International Style
skyscraper, is visible to anyone walking on Park Avenue. 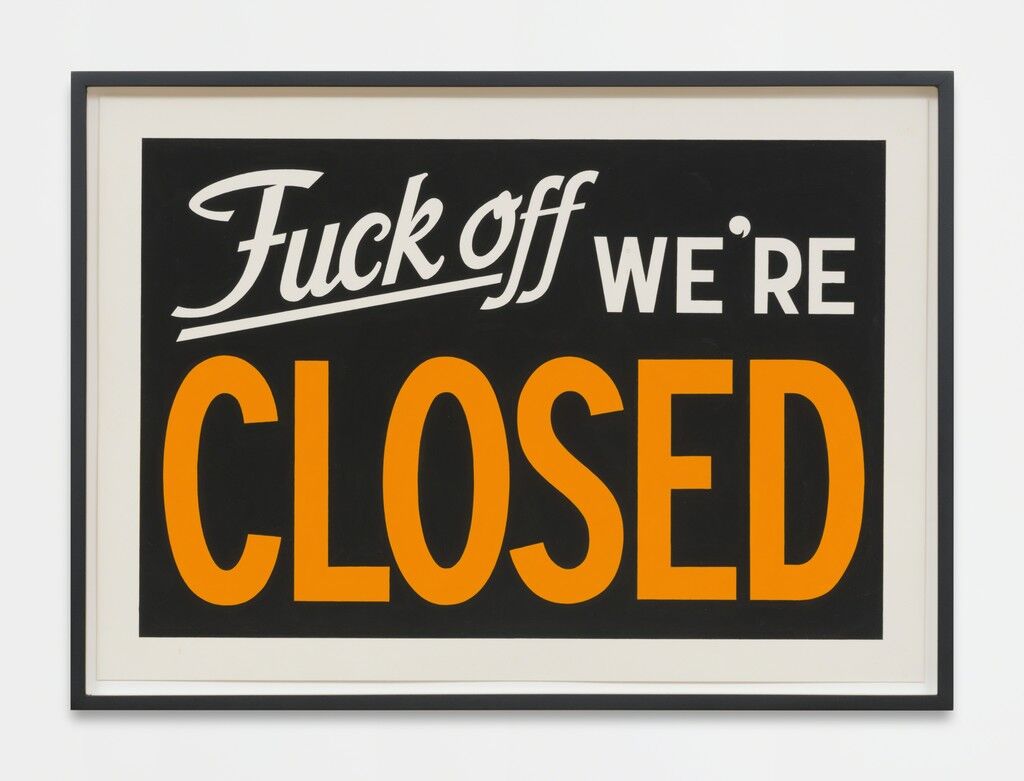 Adam McEwen
Untitled, 2003
Najjar
At Petzel, the primary motif involves small graphite sculptures of everyday objects—the keycard reader on the door of a hotel room; a thermostat; 3D glasses—mounted on images of those same objects. The works play on McEwen’s notion that the graphite sculptures are “sketches” in the way that a sketch on paper is the plan, not the actual work—an idea supported by the parallels between the use of graphite pencils to make sketches, and McEwen’s use of graphite to make sketch-sculptures.
As Petzel’s elegantly knotty press release puts it, “McEwen’s graphite sculptures are three-dimensional drawings of the idea of a thing”—the idea of the thing, and yet still official Adam McEwen sculptures. The contrast between the shadowy graphite rendering and the image of that same object is slightly dystopian, a tension McEwen likened to the science fiction novels of J.G. Ballard.
Much of the preparation for the gallery show was in the wind-up; McEwen would take pictures of certain objects that amused or confused him on his phone, coming back to them later. If the object was sufficiently amusing or confusing, he would then 3D-print a version of the object in graphite. He liked things that were “obvious, but also cast aside.” The metal foot-measurer you’d find at a shoe store, for instance, is something instantly familiar, yet strange; old-fashioned, but not yet replaced by new technology. 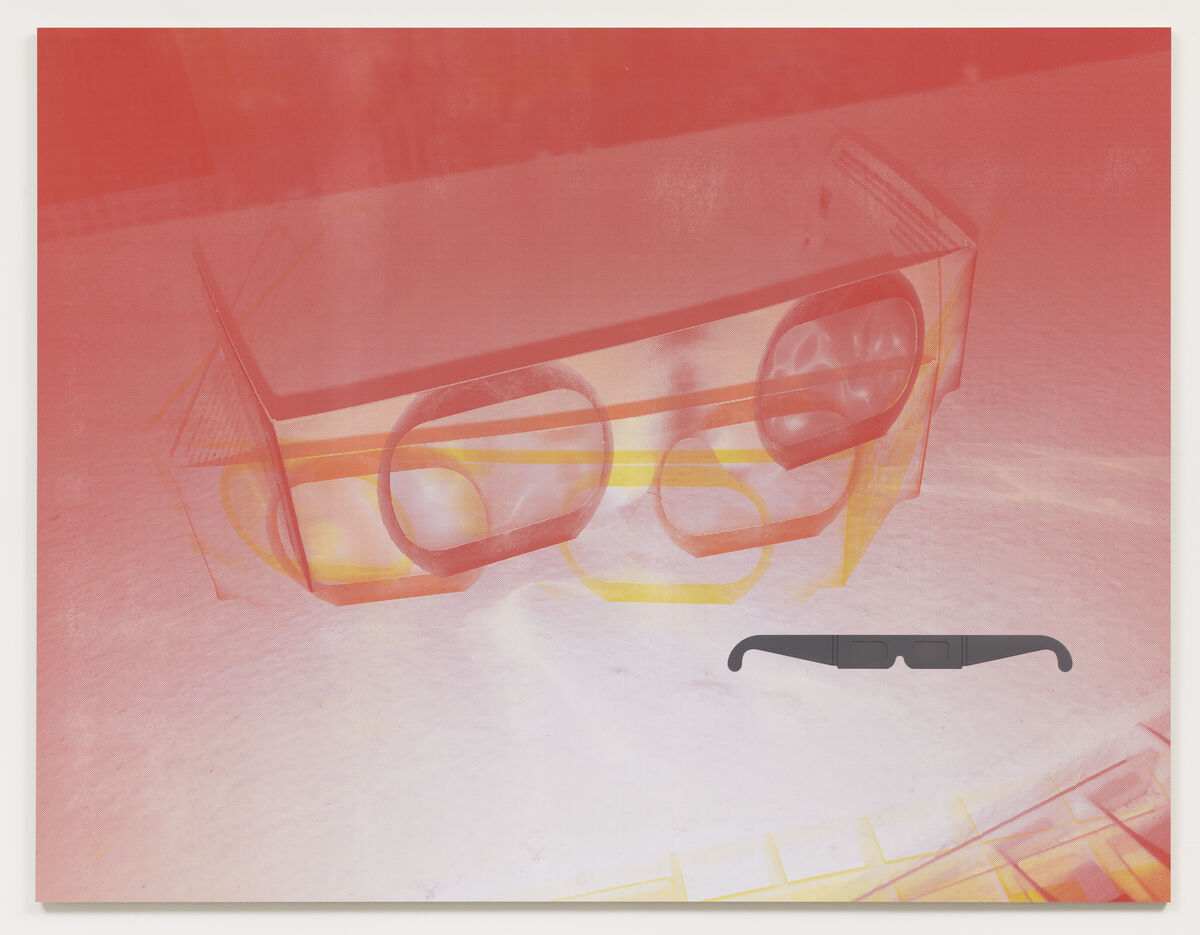 “For the Petzel show, it’s like: Are you really putting a three-dimensional object on a two-dimensional image?” McEwen said. “But
Jasper Johns
did. You can—it’s just that you’re probably going to fail.”
If the show at Petzel is “more prosaic, but also more challenging,” as the press release puts it—in the studio, McEwen called it “slow and weird”—the show at Lever House has more visual pop, engaging directly with the building’s history. It’s not quite public art, as it’s installed in a gallery-like space, but that gallery can be seen by the public.
“There’s all kinds of parameters you have to keep in mind,” McEwen said. “Maybe I would have come up with a more esoteric or more minimal show initially, but then it’s like, no. I was thinking about people coming up and down Park.”
It’s a challenge with which many artists have wrangled. Since the collector Aby Rosen and his partner, Michael Fuchs, bought the building in 1998, art exhibitions have been staged in the glassy lobby of the building. In a partnership between Rosen and mega-collector Alberto Mugrabi, the Lever House Art Collection asked artists to make works specifically for the lobby, which would then be purchased by the two mega-collectors following the show. The two jet-setting taste-makers were offering a unique opportunity for artists: They could present work outside of the gallery and museum circuit, in a place where passersby will have an unexpected run-in with contemporary art. Since 2017, the shows have been curated by Roya Sachs, who has staged exhibitions by
Adam Pendleton
and, most recently,
Peter Halley
. 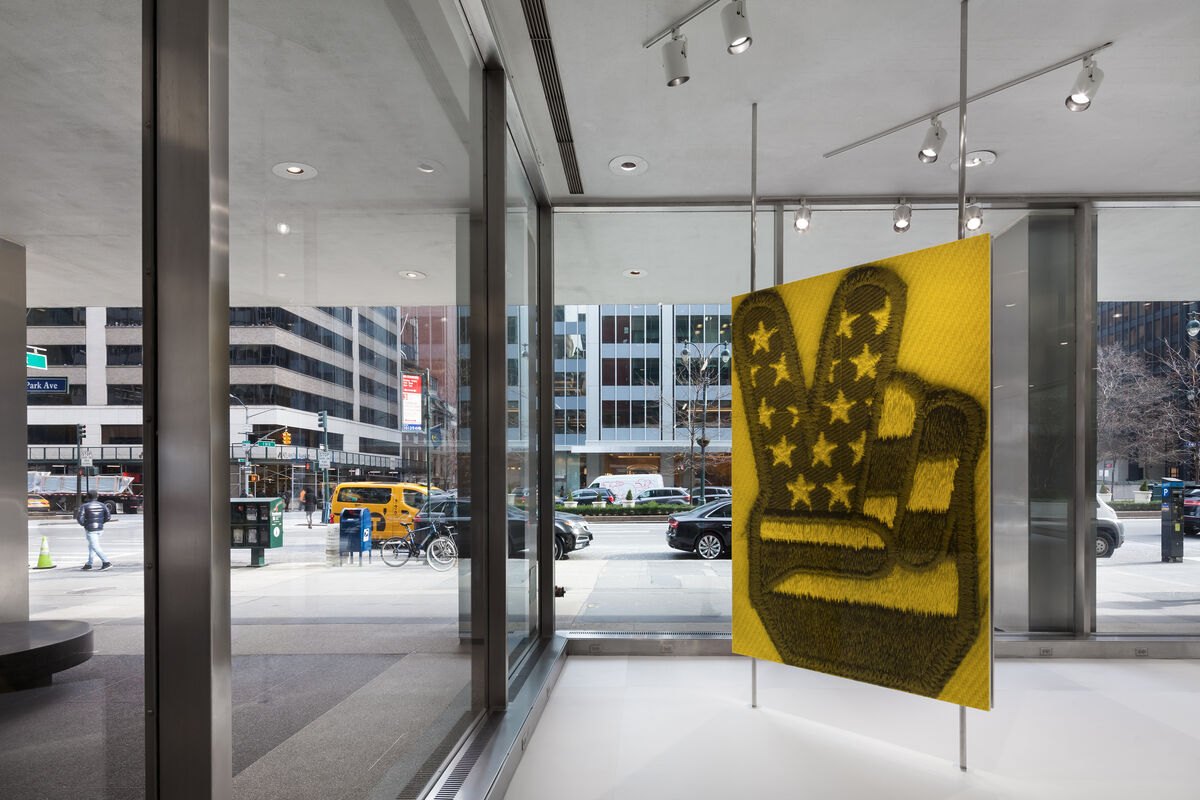 The high-profile location—frequented by contemporary art collectors, titans of real estate, tourists, and Midtown office workers alike—has inspired some artists to make big statements. The
Bruce High Quality Foundation
, for instance, once mounted a full-sized cast-bronze version of the inflatable rat that labor unions use to protest employers. McEwen ultimately decided to take a more indirect approach.
“I have made a few things that sort of play with the market, as there’s a side to a lot of my work that’s protesting an imbalance of power,” he said. “They don’t have any effect on anything, but for me, they’re a way to make me feel better.”
At Art Basel in Miami Beach in December, in the middle of Gagosian’s bustling booth—where the biggest collectors in the country fight to buy
Warhols
and
Basquiats
while dealers throng the tight space, jabbing their fingers at iPads as they try to offload off-site inventory—there was a discrete work installed roughly knee-high on one of the walls that you would miss if you weren’t looking closely: a graphite sculpture of a hotel room card reader.
McEwen specifically asked that the graphite card reader be included in the booth, a subtle nod to the hotel-jammed strip of Miami Beach and the absurdity of the current art fair circuit, which has collectors spending different nights sticking plastic cards into different doors in different cities. Such little stunts show that McEwen has a playful spark that burns even at the highest end of the market.
“There’s not much to feel good about at a fair—a fair is a situation designed to show people art for about 30 seconds,” McEwen said. “It’s not a great place to show slow art.”
Nate Freeman
Related Stories