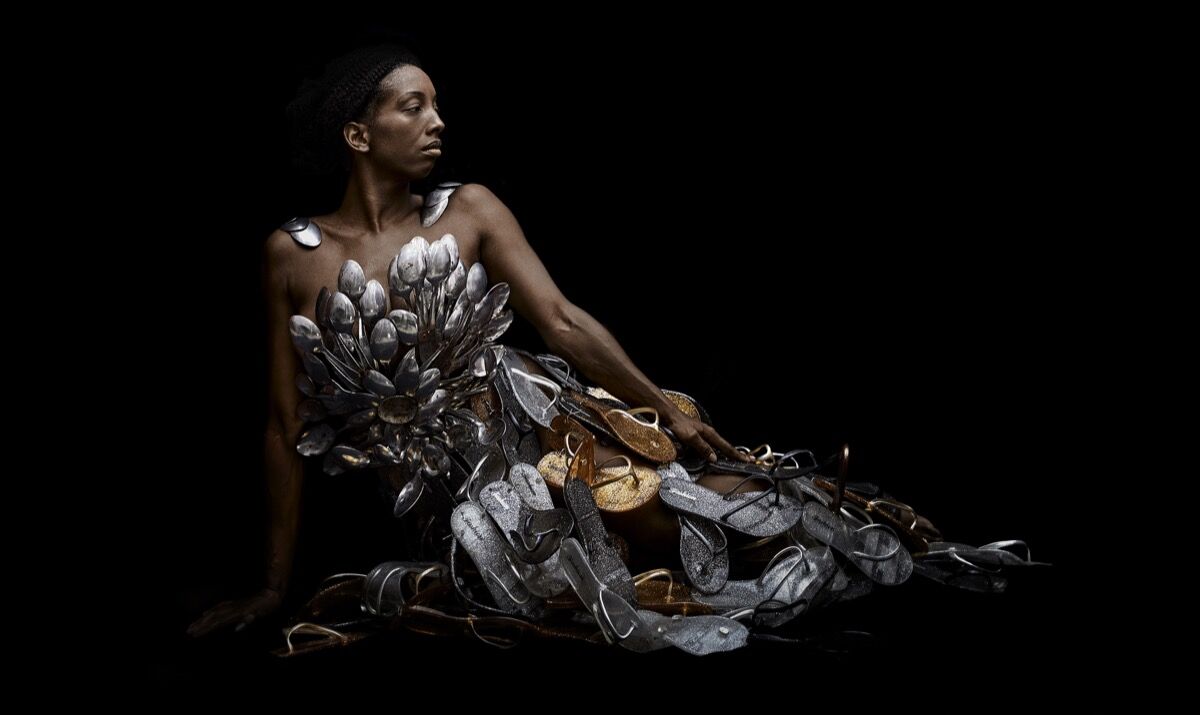 Four hundred years ago last month, the first ship bearing black slaves landed on the shores of what would become the United States. Between the lands of freedom and bondage were thousands of miles of ocean that became a bloody liminal site for newly enslaved Africans. The Middle Passage claimed millions of lives, with the bodies of men, women, and children thrown to the overfed sharks that trailed slavers’ vessels as they made their way to the Americas.
Photographer
Ayana V. Jackson
divides her time between Paris, Johannesburg, and New York—cities on the three continents that marked the triangular slave trade. The history of the black experience in each of her home regions saturates her images, and in new works for “Take Me to the Water,” at Chicago’s Mariane Ibrahim Gallery, she looks to the sea in between. 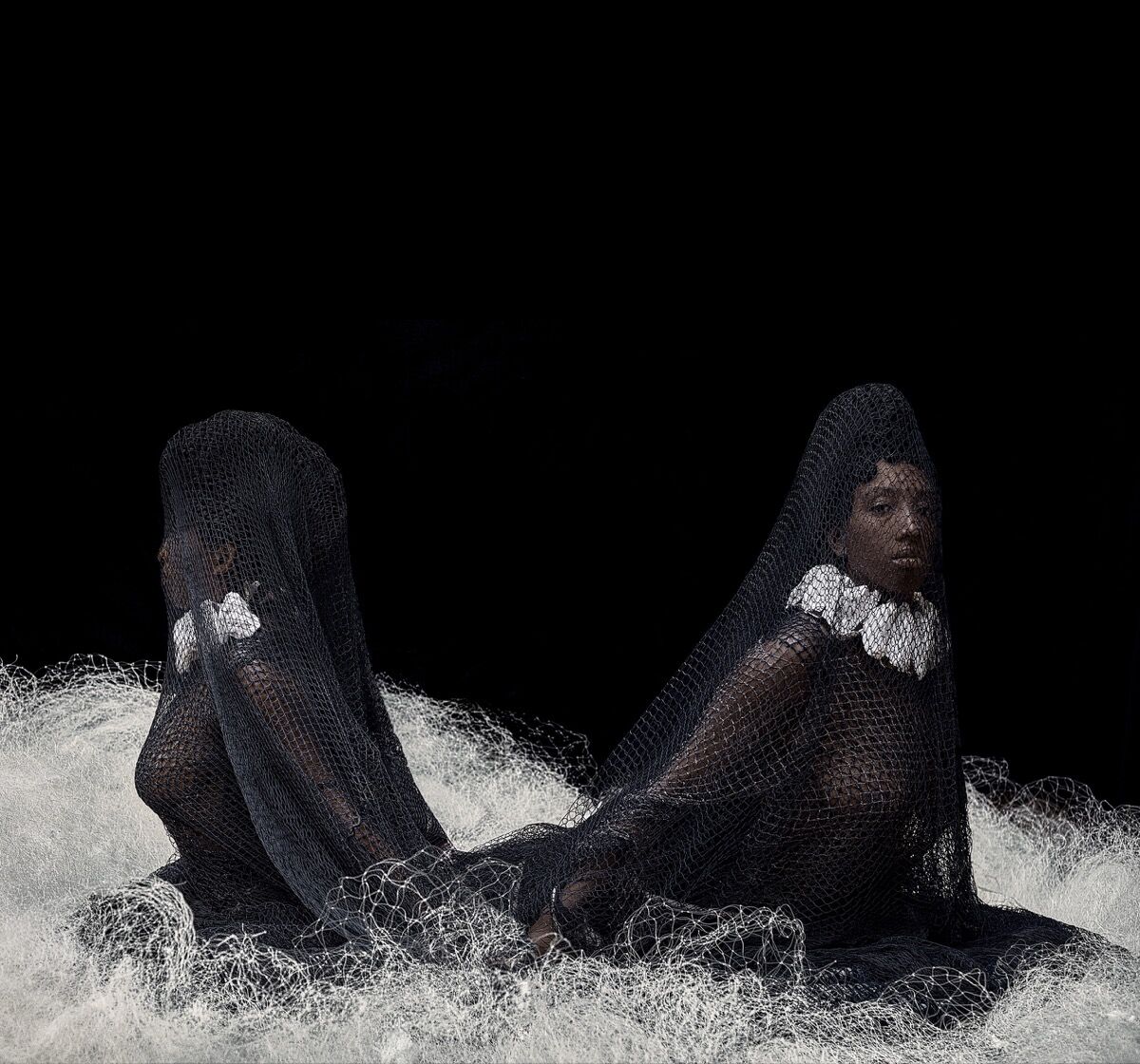 Jackson, raised in New Jersey and descended from a follower of the Pan-Africanist Marcus Garvey, grew up in a family that cast its eyes across the Atlantic. Though they were “wholly and proudly black Americans,” she said during a recent phone interview, her grandfather acquired land in Ghana, believing that the family “should always have a connection to the continent.” Later, Jackson studied under photographer
Katharina Sieverding
in Berlin, but her first photography teacher was her father. Jackson’s family cultivated in her a perspective on global blackness that countered the stereotypes peddled in Sally Struthers’s Christian Children’s Fund commercials and the ethnographic condescension of National Geographic magazine.
“My family did a lot of work to make sure that I understood the broader spectrum of what black identity looks like,” Jackson said. This contrast between the black life she saw around her and black bodies as reflected in the media permeates her work. Jackson often restages images from history in a practice she’s called “[fighting] photography with photography.”
By presenting her own version of imagery initially framed by a white, Western gaze, Jackson explores themes around race, colonialism, and reproduction. A 2011 series, “Black Madonna Tabloids,” found her recreating glossy spreads of the kind found in People and Us Weekly, but rather than images of white celebrities out and about with adopted black children, Jackson herself posed with pale babies and toddlers. In “Archival Impulse” (2013), she recreated images from early colonial photography, sometimes posing as every figure in the reference photo, nude Africans and heavily clothed white missionaries alike. One image in her series “Poverty Pornography” is a retelling of Kevin Carter’s photograph The vulture and the little girl (1993)—but here, Jackson is both the looming vulture and the starving child. 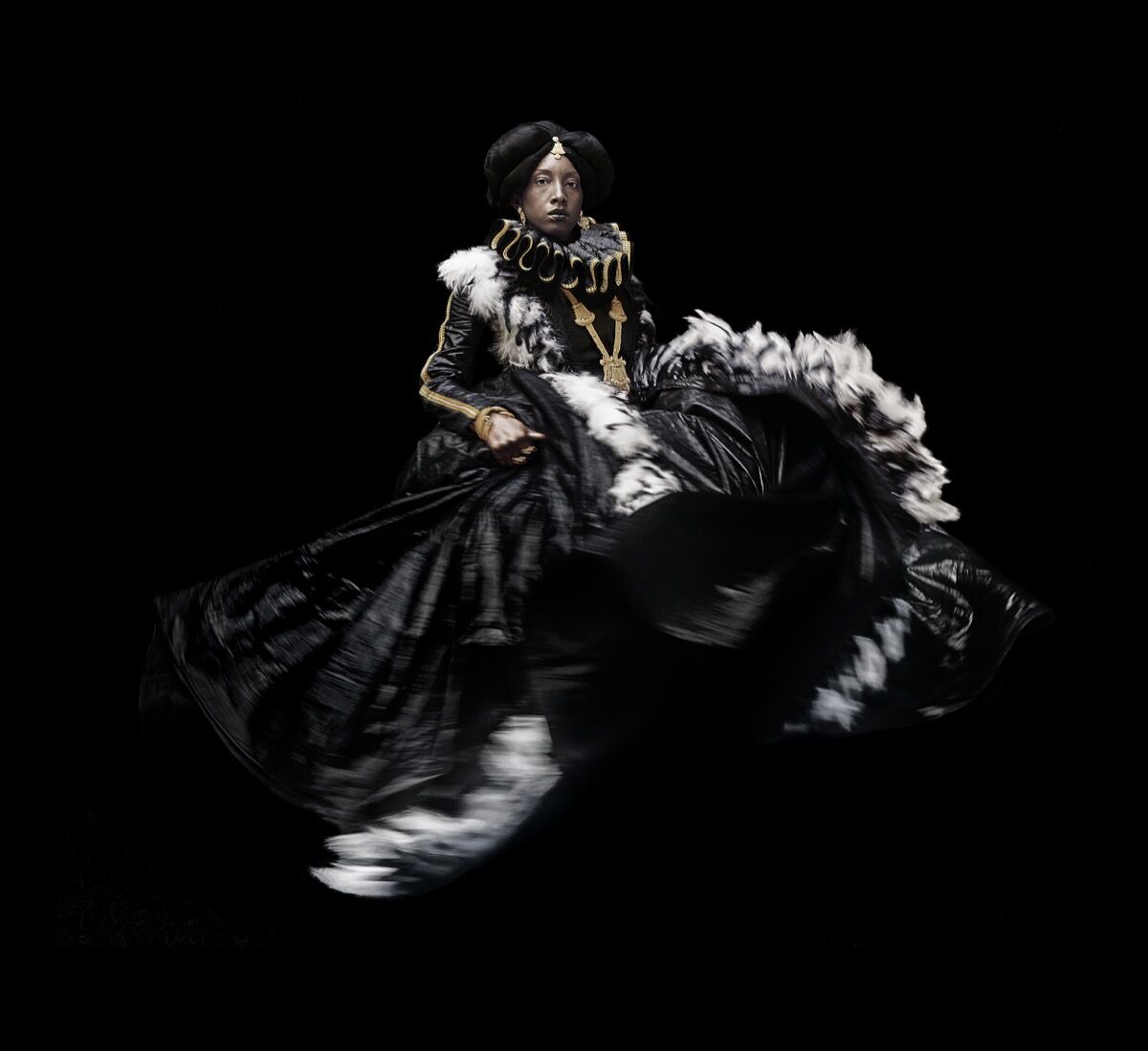 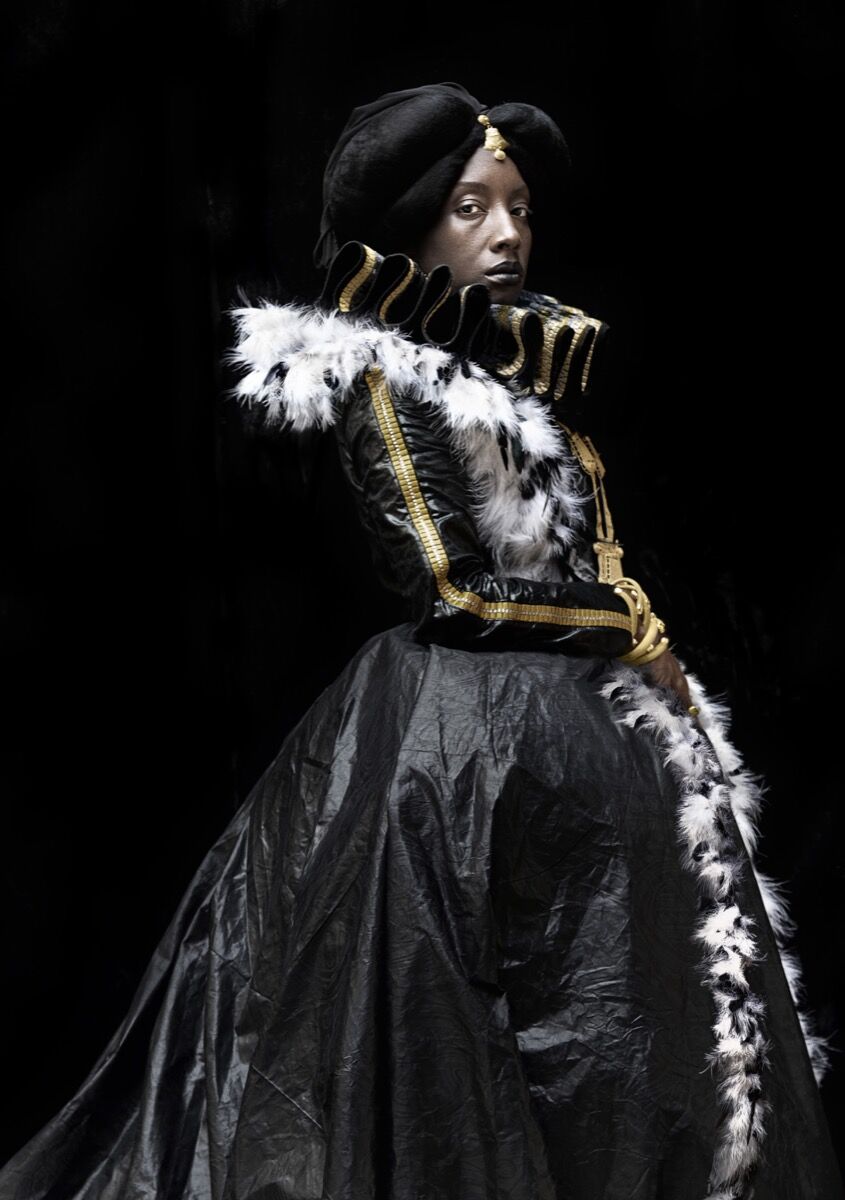 Advertisement
Though her work has often been deeply intertwined with real-world history, in “Take Me to the Water,” Jackson turns to the realm of lore. “I was looking at historical images that have informed how we see ourselves and each other,” she said of the shift. “I started to think about how mythology does the same thing.” The works mine myths old and new, from the diaspora-spanning Mami Wata to Detroit techno duo Drexciya’s vision of a black Atlantis. The latter imagines an
Afrofuturist
undersea utopia populated by the children of pregnant slaves thrown overboard during the Middle Passage.
For her prior works rooted in historical portraiture, Jackson often wore rented period garments. “Take Me to the Water” marks the first time she’s worked with designers to craft the the clothing her characters wear. Collaborating with Senegal’s Rama Diaw and Angola’s Mwambi Wassaki, she created garments that include textiles ranging from intricately woven Kuba raffia cloth to veils made of fishing nets. There are dresses that Drexciyans might craft from the human cast-offs polluting their aquatopia: a skirt made of plastic flip-flops; a bodice of spoons. When tackling African water gods, like Yoruba deity Yemaya, Jackson is careful to note that, as someone uninitiated in the religious traditions from which she’s drawn inspiration, she’s “referencing spirits, not embodying spirits.” 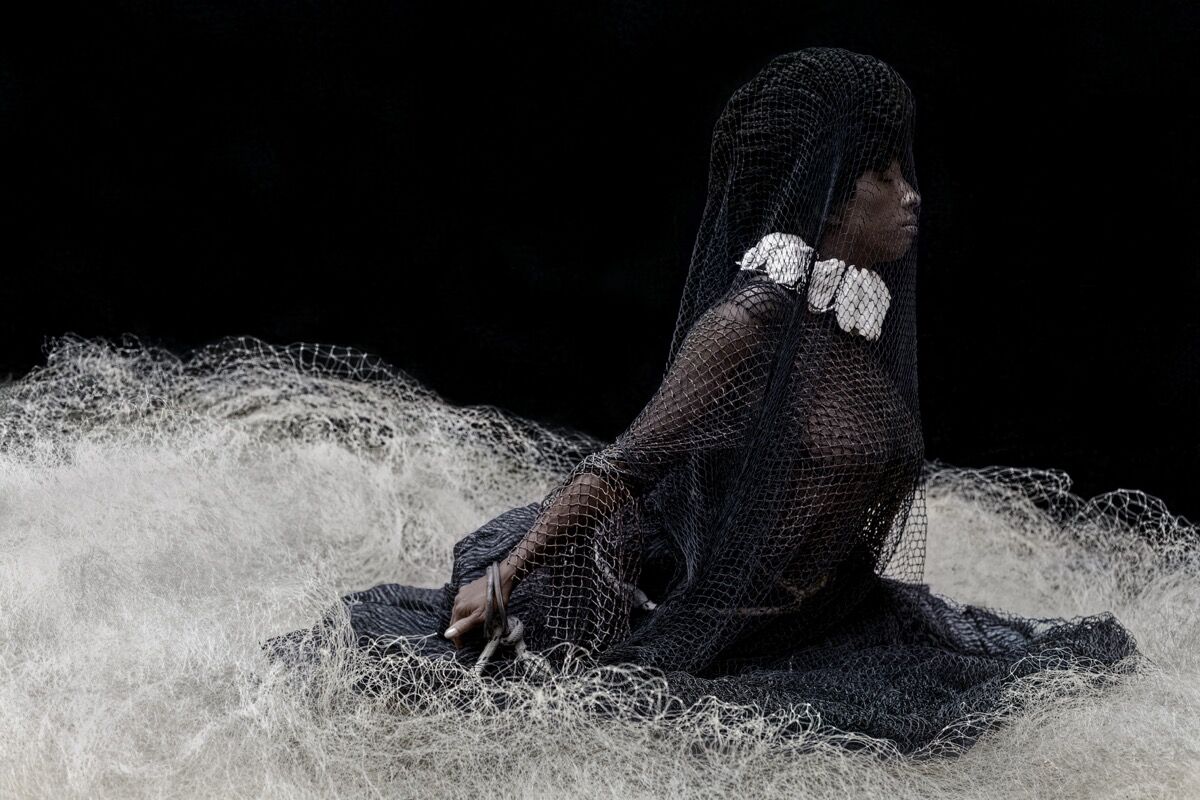 But as in her earlier works, Jackson also makes use of Western historical points of reference. In Sea Lion (2019), she poses as a Drexciyan goddess in a work based on a real-life portrait of Queen Elizabeth I, whose reign saw the expansion of English seafaring might—and the birth of the nation’s trade in African people. The development of the image was born out of Jackson’s desire to communicate the passage of centuries in a visual language recognizable to global audiences. “I was like, ‘How do I mark when the slave trade was happening, when these women were being thrown overboard?’” she asked. “Unfortunately, we’re more familiar with the European silhouettes of fashion of that era than we are of any other part of the world.”
But in including Queen Elizabeth, Jackson—who’s described her practice as being concerned with “[liberating] the black body”—offers a reminder: Members of the black diaspora are not the only ones who might be liberated from the violence of the colonial imagery that forms the landscape of Western minds. “What’s becoming more and more clear is that, actually, the descendants of the perpetrators of those myths and stereotypes also need healing,” she said. “So, yes, I’m primarily concerned with the black body,” she continued, but “healing that injustice against the black bodies has repercussions for all of humanity.”
Gabrielle Bruney
Correction: A previous version of this article misstated that Ayana V. Jackson is descended from a student of Marcus Garvey. Jackson’s great-grandfather was a follower of Garvey.
Related Stories 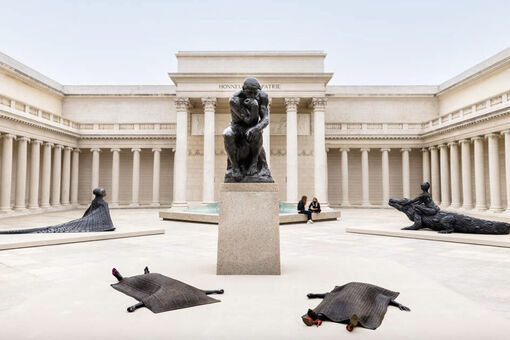