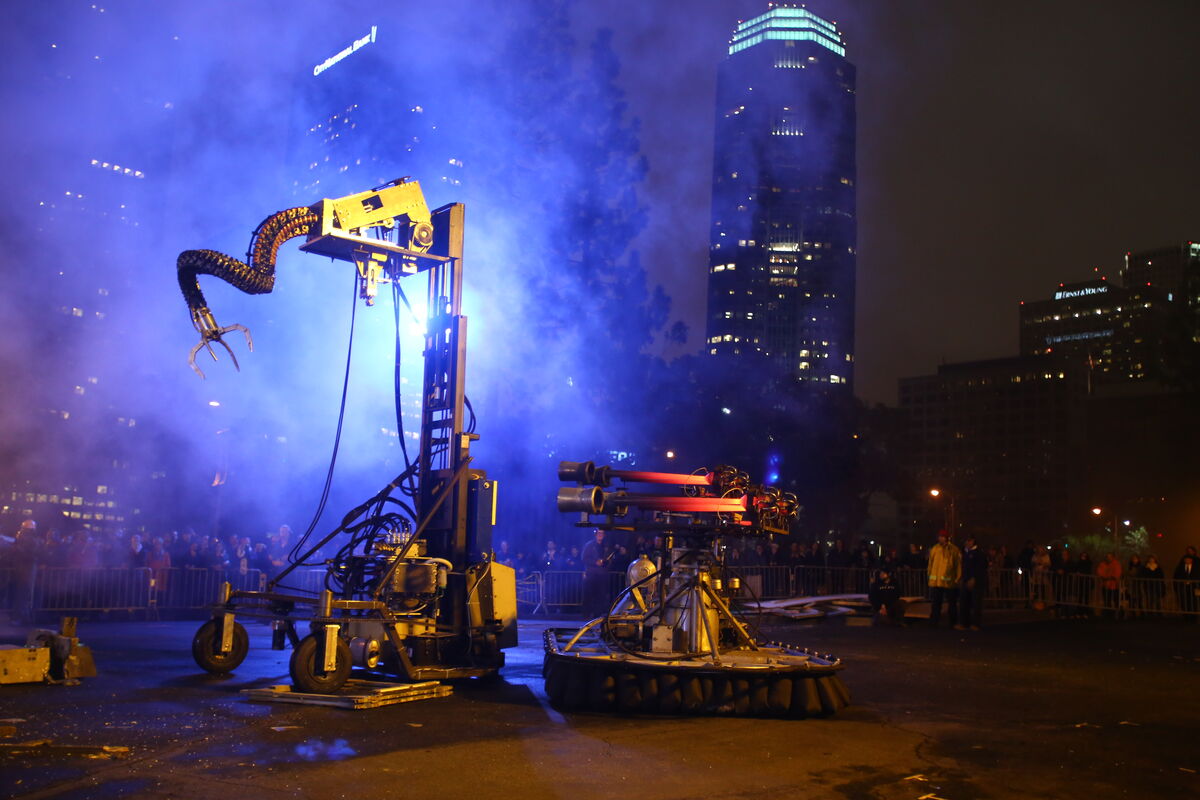 “I love wasting technology,” Mark Pauline tells me. “I love it when you take something that’s really practical and do something ridiculous with it.” We’re standing in the middle of Marlborough Contemporary, a white cube gallery in New York’s Chelsea district that has suddenly been converted into what appears to be a near-future auto repair shop. The heady tang of gasoline and grease fills the air. A crew of assistants is performing last-minute surgery on a variety of large-scale machines—inspecting welds, checking voltages—and Pauline roves around the space, the crew-cutted foreman overseeing this high-tech madness.
Nothing here resembles a contemporary art exhibition, but Pauline isn’t really in the contemporary art business. He’s the founder of something called Survival Research Laboratories (SRL), an outfit he launched in 1978 with the intent of creating chaotic live performances featuring remote-controlled robotic creatures. Or, as he bills them, “dangerous and disturbing mechanical presentations.”
This is SRL’s first proper New York outing in over two decades. (The group is now based in Petaluma, California, a bit less than 40 miles from San Francisco.) Back in 1985 they participated in a show at the now-defunct Manhattan nightclub Area, pitting various machines against each other in a sort of industrial boxing ring. One of the kinetic assemblages was “driven” by a guinea pig named Stu, Pauline’s pet, who controlled the device from a small command center embedded within it. (“I spent a long time training it so it didn’t panic around the machine,” the artist affirms.) 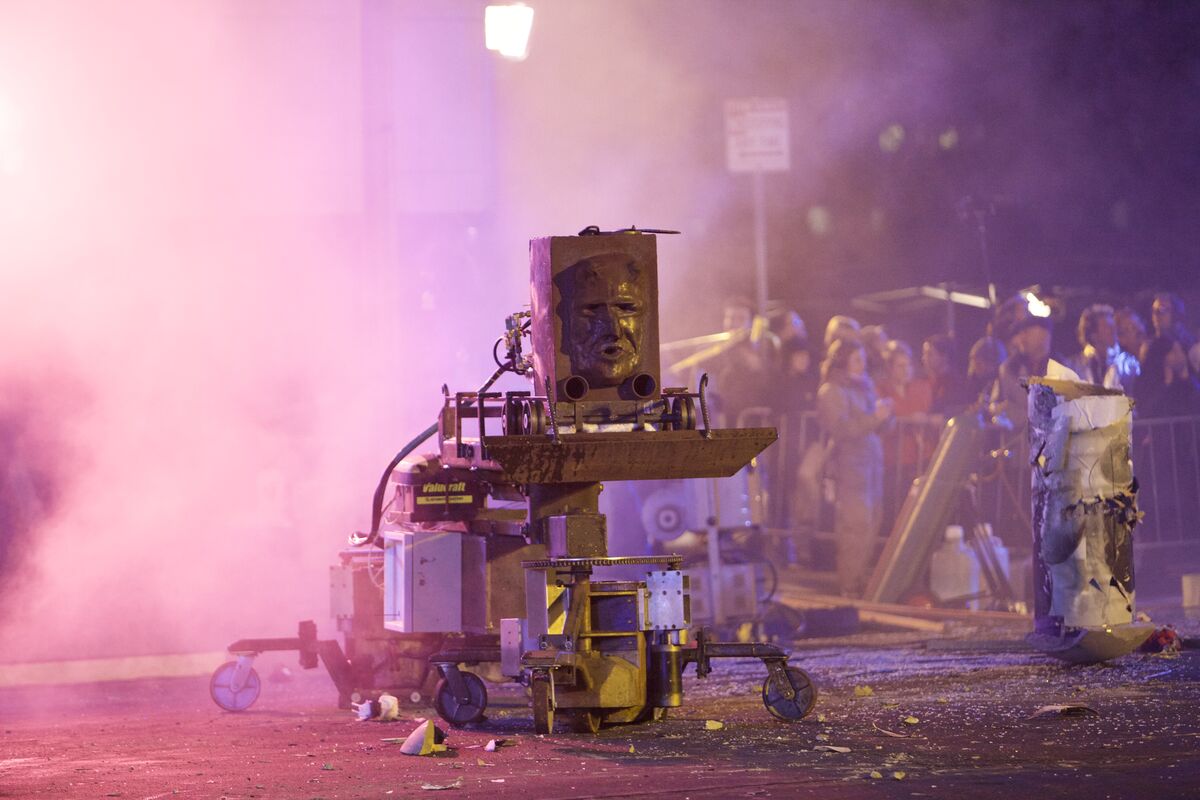 SRL’s exhibition at Marlborough Contemporary won’t involve any live animals, but there’ll be plenty of the machine-on-machine violence that the group has become known for. There’s nothing subtle or understated about what Pauline has been up to over the past 40 years, as he’s put technical know-how to absurdly entertaining purposes. A typical SRL creation stomps and shudders on metal legs, perhaps while unleashing thick tongues of flame; others have been programmed to wield bats and stab things. Their public appearances are orgiastic celebrations of fire and noise in which things are broken, intentionally or otherwise.
Pauline admits that SRL’s aesthetic might not be as immediately shocking as it was in the 1970s and ’80s. “Nowadays, robots are considered to be a harmless part of popular culture—after Robot Wars and everything,” he says, referring to the British reality TV show in which participants build machines that fight each other. But shoehorned into the normally polite context of a gallery, SRL promises something different, and perhaps uncomfortable.
Given the bombast of what he makes, Pauline comes across as an understated guy. He seems fairly unfazed by the last-minute tinkering required before the opening of the exhibition (which bears the unwieldy title “Inconsiderate fantasies of negative acceleration characterized by sacrifices of a non-consensual nature”). The preparatory scene has a science-club vibe, if everyone in that science club oversaw an engineering research department and built race cars designed to speed across the Black Rock Desert on the weekends.
Part of SRL’s spirit, Pauline says, is simply a West Coast thing, a symptom of California’s unique social fabric. “When I came out to San Francisco, you’d go to a punk-rock party and there’d be all these weirdos—but also full-on scientists,” he tells me. “The spark that started the tech revolution out there was that people didn’t differentiate between creative artists and creative scientists.” 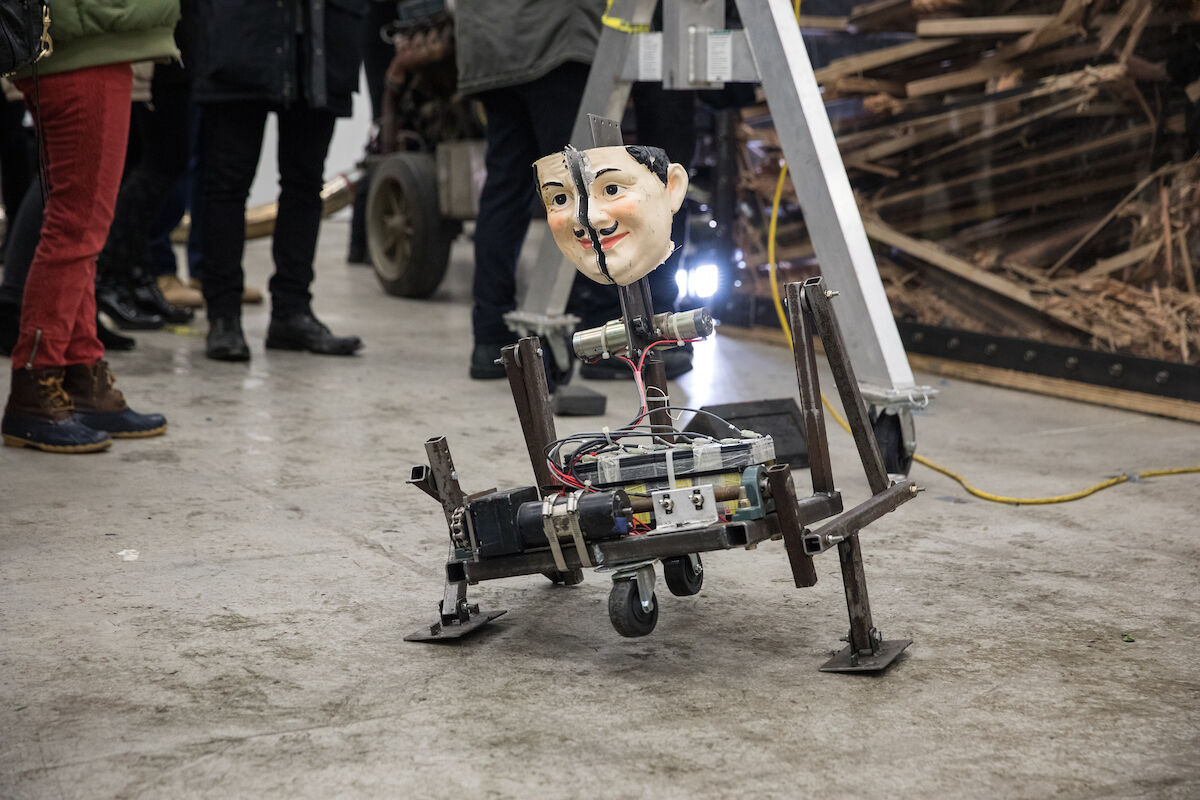 Installation view of “Inconsiderate fantasies of negative acceleration characterized by sacrifices of a non-consensual nature” at Marlborough Contemporary. Photo by Walter Wlodarczyk.

Advertisement
SRL’s performances attracted fans and hangers-on, people who wanted to take part and contribute knowledge. (They also attracted a steady stream of dumbfounded cops, whose presence is basically a given in any video documentation of the group’s shows.)
The total team of collaborators now numbers around 40, with some of the members having been on board for decades; the eclectic crew can start to seem like the cast of a very niche, oddball sitcom. There’s Kimric Smythe, for instance, who collaborates with Pauline on props, among many other things. “All the shit he builds looks like the Unabomber made it,” Pauline says. At Marlborough Contemporary Smythe is busy assembling kinetic robots that will flap their arms and legs on the floor. “I do the jet engine work on occasion, too,” he tells me, mildly. Smythe used to be part of the pyrotechnics crew at Burning Man—“before it became, in my opinion, a clusterfuck of techno”–and he also helms what’s billed as “Northern California’s only full-service accordion store” out of Oakland.
Knee-deep in a machine on the other side of the gallery I meet SRL collaborator and computer master Christopher Brooks. He’s on staff at UC Berkeley, and is also the executive director of something called the TerraSwarm Research Center, charged with “addressing the huge potential (and associated risks) of pervasive integration of smart, networked sensors and actuators into our connected world,” which sounds both incomprehensible and deeply frightening. At the moment he’s troubleshooting an enormous robot with a flailing claw-hand that, on Saturday, will engage in a remote-controlled brawl in the middle of West 25th Street.
Pauline himself is an autodidact without any academic training in how all this stuff works. He’s previously described how, growing up in Sarasota, Florida, he taught himself to repair the expensive cars and boats of his wealthier peers (who generally lacked any technical skills themselves). In his late teens, Pauline worked for an Air Force contractor in Florida, and later studied the visual arts at Eckerd College in St. Petersburg, Florida. He now supports SRL’s operations by, in his words, “buying and selling tech companies”—often acquiring complex equipment on the cheap, refurbishing it, and reselling it. (He’s previously bragged about how SRL’s early days were facilitated by more extra-legal acquisitions of goods.) 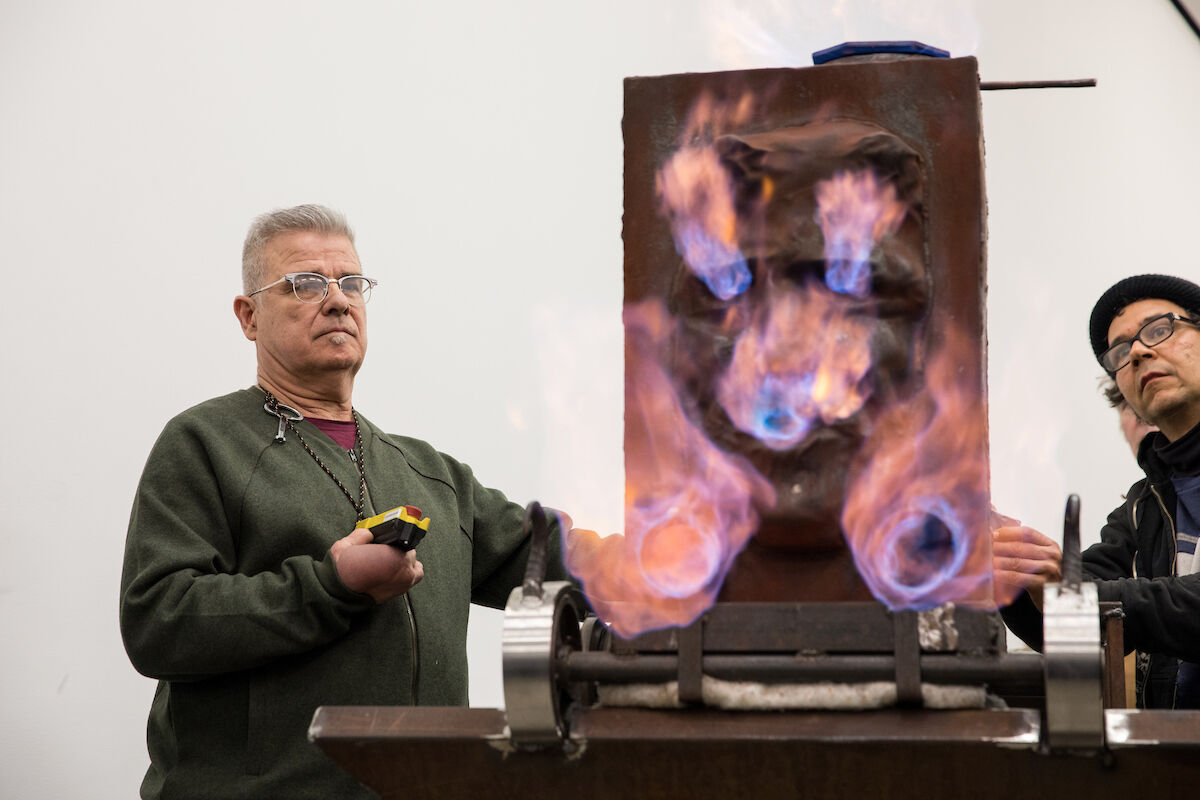 Installation view of “Inconsiderate fantasies of negative acceleration characterized by sacrifices of a non-consensual nature” at Marlborough Contemporary, with Mark Pauline at left, and John Colle Rogers at right. Photo by Walter Wlodarczyk.

Pauline’s proud of his talent for spotting underpriced, semi-broken stuff that can be rebooted to work strange magic. He shows me a bulky robot that was evidently used in the planning stages of the 2013 film Gravity, outfitted “with a camera that they were using to prototype the moves to make people look weightless.” SRL bought the broken equipment for $1,400 and fixed it; Pauline says that it’d now be worth about $15,000 on the open market. At Marlborough Contemporary, it’ll be used to mount (and move around) a 55-inch monitor running a documentary loop of previous SRL shows.
SRL doesn’t have many connections with the mainstream art world, though Pauline’s wife is the executive producer for artist
Leo Villareal
, represented by Pace Gallery. As for contemporary art in general, Pauline seems fairly lukewarm. “I’m always interested in weird stuff,” he says, “but it’s hard to take it seriously—especially tech art.” He mentions
Jordan Wolfson
, creator of (Female Figure), a 2014 animatronic sculpture of a grotesque pole-dancer. “My friend in Los Angeles, his company built it,” Pauline says. “It’s a cool thing, but [Wolfson] didn’t do anything—he just ordered it. I’m not into that kind of art. People at least have to put in sweat equity of some kind. That’s my problem with the art stuff: It’s either not that interesting, or the so-called artist doesn’t do anything, or doesn’t know how to do anything.”
Pauline, on the other hand, is clearly a doer. And right now he has to figure out if there’s a working carbon monoxide detector in the house, and where they can buy extra gasoline to run the Pitching Machine, a contraption that’s designed to decimate 2x4s by shooting them into a reinforced cube at around 200 miles per hour. 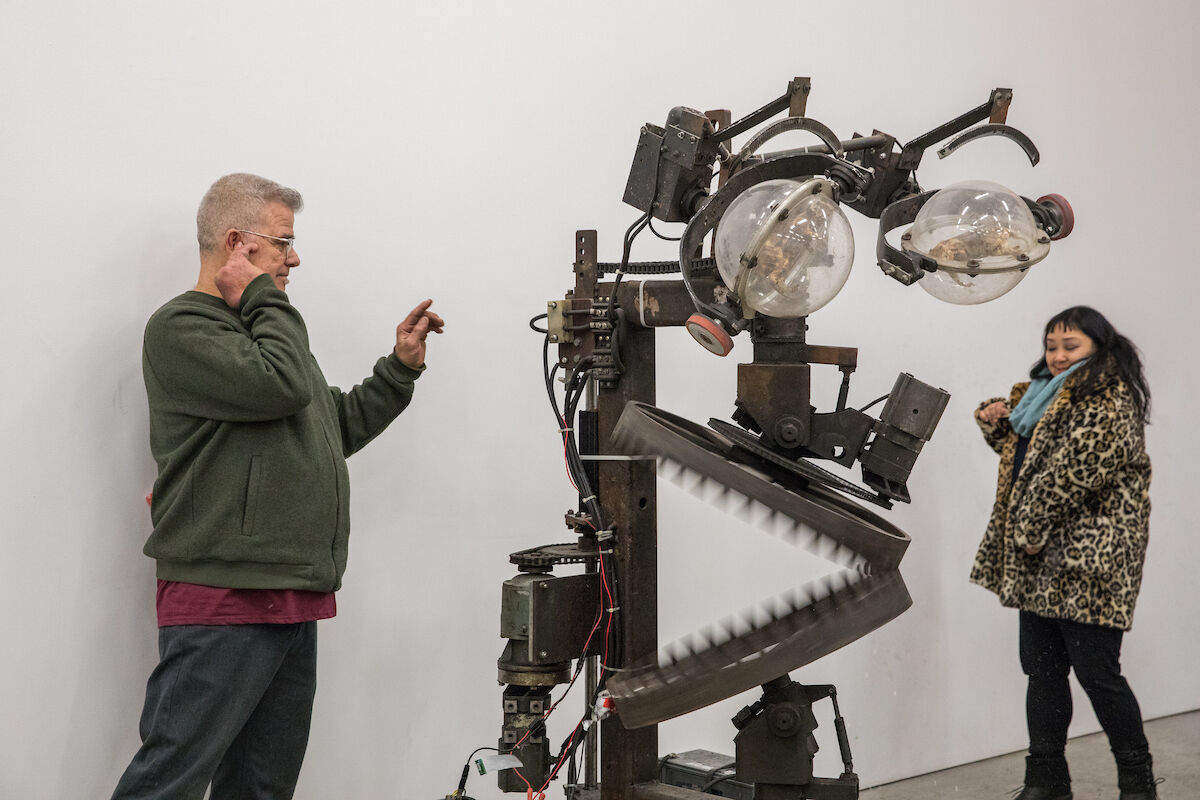 Installation view of “Inconsiderate fantasies of negative acceleration characterized by sacrifices of a non-consensual nature” at Marlborough Contemporary, with SRL's Karen Marcelo at right. Photo by Walter Wlodarczyk.

The Saturday after my first visit to Marlborough Contemporary, Pauline’s Spine Robot (2012–14), with its flailing, articulated claw, squares off against the Running Machine (1992) and other machines in the wintery slush of West 25th Street. A large crowd circles the action as if cheering on some permitless mechanical cockfight. After the herky-jerky battle, the audience pushes its way back inside the gallery. A team member warns passerby not to get to close to Mr. Satan Head  (2007), the machine still hot from earlier  fire-belching. The gallery is a squall of industrial aroma and noise, much of it unpleasant, most of it courtesy of Squirrel Eyes With Rotating Jaws (1987), a whirring maelstrom of grating metal teeth, ornamented with taxidermied rodents.
Pauline is wearing an olive green, military-style jumper, yelling about entropy into a megaphone. The crew is revving up the Pitching Machine (1997–2017), his D.I.Y. sculpture-weapon that uses a rapidly spinning pair of truck tires to turn wooden planks into projectiles. Prop-master Smythe’s series of handmade “Boogie Bots” are spasming on the floor nearby: pop-eyed skeletons and humanoids, time-consumingly rendered despite their inevitable demise.
Which would be sacrificed first? The audience settles on a hapless skeleton, which is hauled up, awkwardly, via a hitch, and lowered into a rectangular cube that’s roughly the size of a Manhattan bedroom. Pitching Machine is switched into high gear, the tires squealing, and a quiver of planks is loaded into its chamber—soon to be fired at enormous speed into the skeleton sculpture, which does a heroic job of taking all that impact.
Pauline and SRL will continue the process, slowly destroying the bots, and turning Pitching Machine’s receptacle into a graveyard of wood chips and mechanical parts. (The cube itself, and its exploded contents, is for sale.)
The overall vibe is something in between a rock concert and a public execution. It’s unlikely that any other art gallery in Chelsea has ever smelled this strongly of burning rubber.
“We do a lot of work,” Pauline had told me, shrugging, “then go destroy it.”
Scott Indrisek
Related Stories