This Artist Built a Tattoo Parlor Dedicated to Black Pride 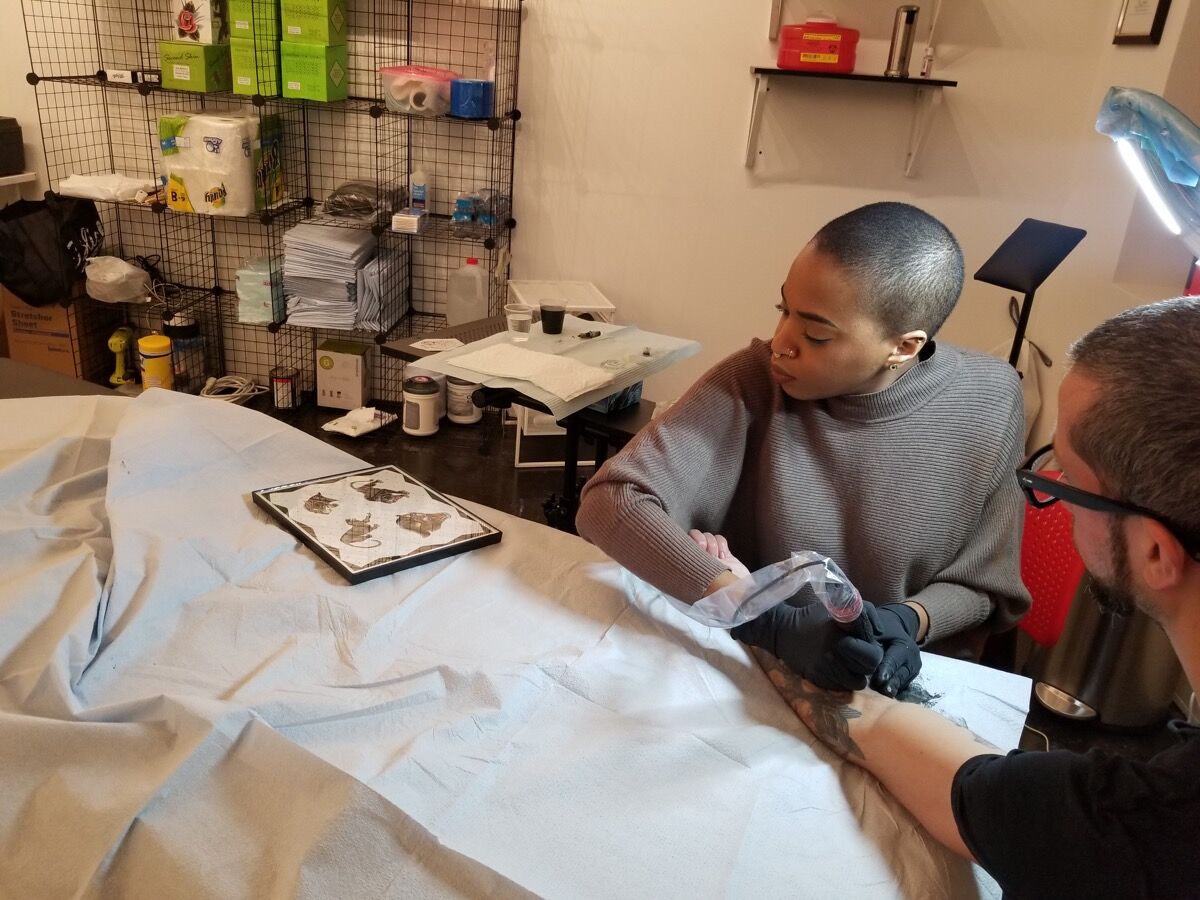 Doreen Garner
is holding court in Brooklyn at “Invisible Man Tattoo,” an exhibition and performance in the guise of a neighborhood tattoo shop. “This is probably the closest I’m ever going to get to being a surgeon,” she tells me, with a little laugh. For the multidisciplinary artist, whose sculpture and installation work focuses on the body, medicine, and violence, tattooing seemed like a logical step, a way to marry mark-making with living flesh.
Every Friday and Saturday through March 3rd, Garner will be inscribing skin at her pop-up parlor, located inside Recess’s new location in Clinton Hill, Brooklyn. For this latest iteration of the gallery’s “Session” initiative, the artist has transformed the spacious white cube, adding a cozy waiting area, and decorating the walls with framed posters and prints celebrating black resistance and resilience, including the iconic photograph of athletes Tommie Smith and John Carlos raising their fists in the Black Power salute at the 1968 Olympics. 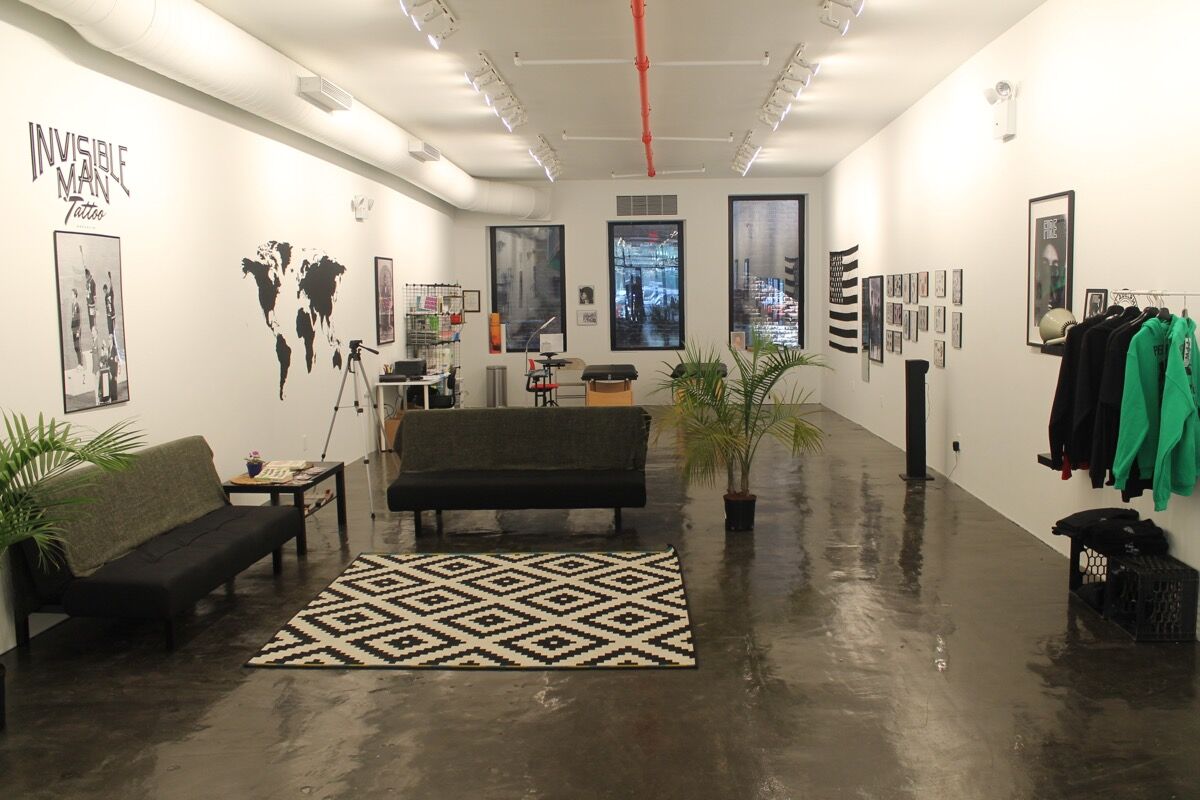 There’s merch for sale on the same theme, like sweatshirts from Philadelphia Printworks celebrating the legacy of the Black Panther Party. In the waiting area visitors can flip through books from Garner’s collection, including the show’s namesake, Invisible Man by Ralph Ellison. The back area has everything a working tattoo shop needs—padded tables, bright lights, sterilization equipment, inks, and bottles of saline wash.
The premise of the project is straightforward. Participants can book a session with Garner through the gallery’s website, selecting either a simple tattoo from sets of existing designs, or proposing a more complex one of their own choosing. The growing library of tattoos Garner draws from for the project includes black panther heads, cotton flowers, and portraits of Martin Luther King Jr. and Angela Davis. A unique pricing structure is built in: Those who self-identify as black or brown people of color can receive select tattoos free of charge.
Although Garner isn’t the first artist to combine tattooing and social practice, her approach is more urgent, and more overtly political than say,
Scott Campbell
’s 2015 project Whole Glory (where the artist invited participants to stick their arm through a hole in the wall to receive a surprise design), or Gagosian Gallery’s exhibition-as-tattoo-parlor booth at the 2016 New York Art Book Fair held at MoMA PS1, or irreverent painter
Alex Becerra
’s tendency to tattoo at exhibition openings. 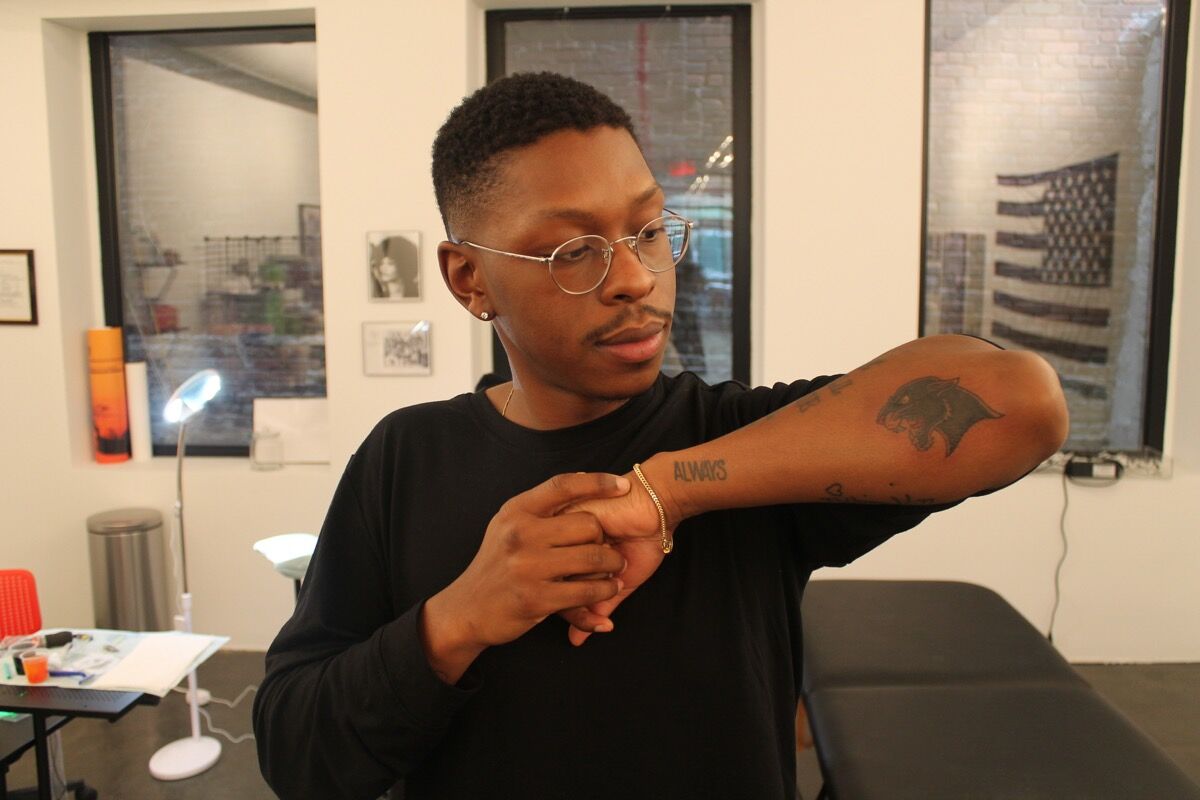 Andrew Raine after getting a tattoo from Doreen Garner at  “Invisible Man Tattoo.” Courtesy of Recess.

Advertisement
“Invisible Man Tattoo” is intended to address a distinct lack of representation in the tattoo world. Stop and try to picture for a moment the typical flash you see at a tattoo shop. The figures in these designs are weirdly homogeneous, and almost always white: “The women are all busty pinup girls and the men are super macho white guys with huge muscles or a strong mustache,” notes the artist. These motifs, repeated over and over again, present a mythos of American grit, one in which people of color are conspicuously absent. This made Garner wonder, “If black people are such a large part of why America succeeded, why aren’t there any images in tattoo shops across the U.S. that depict and celebrate blackness?”
“Invisible Man Tattoo” directly addresses the erasure of black history and achievement from tattoo culture, while also creating a space where people of color feel welcome. “For most of my life my only interaction with tattooing was somebody doing it in their house,” Garner says. “Or people in my high school getting it done illegally. That was their main channel, which speaks to not feeling welcome in official tattoo shops.” 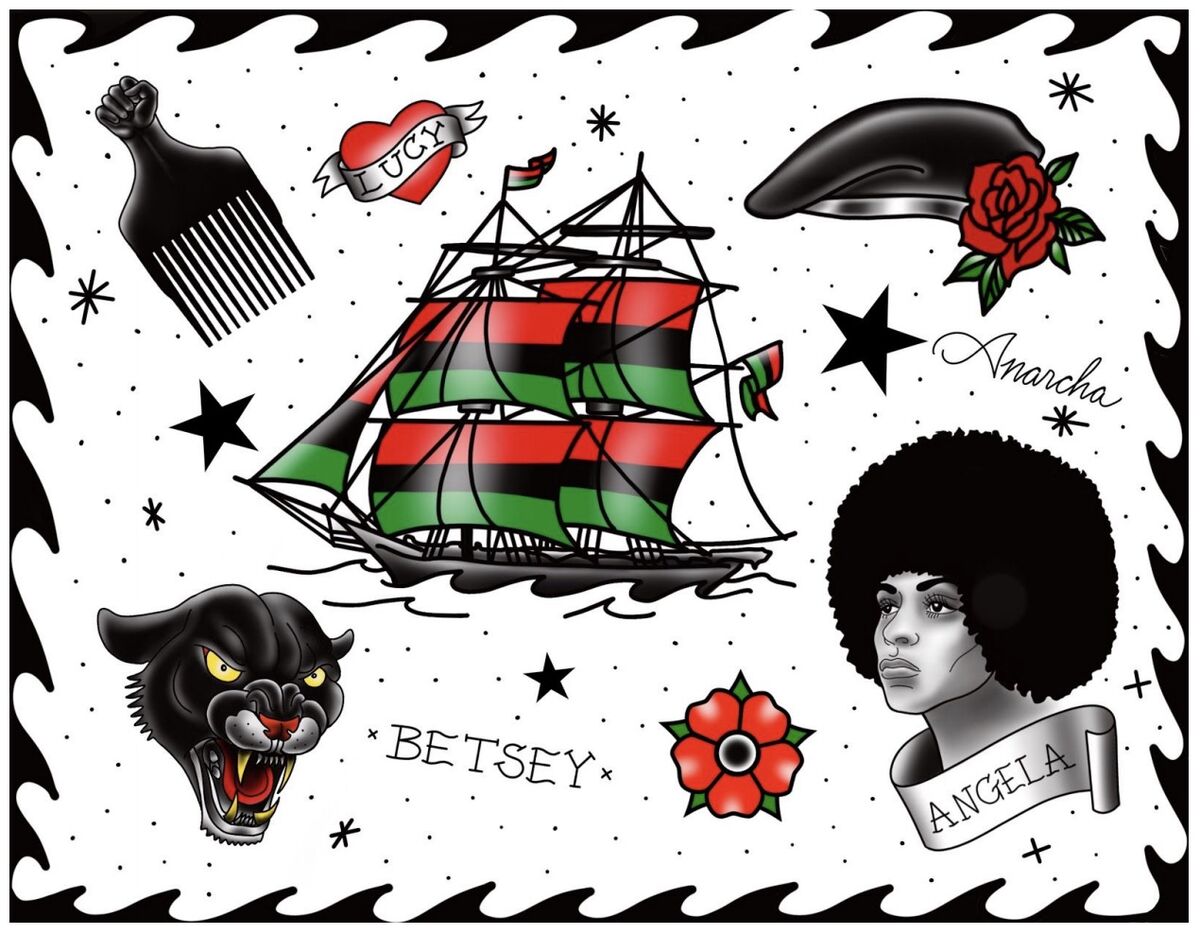 Flash designs offered by Doreen Garner at 'Invisible Man Tattoo.'. Courtesy of the artist and Recess.

The project also speaks to the need for women and people of color to be adequately represented in the industry, which is still dominated by white men. “A lot of people are coming to me saying, ‘I’ve been looking for a long time for a woman who’s a person of color and does tattoo art,’ “ Garner tells me. One participant in the Recess project explained that he was getting a tattoo of a cotton plant to pay homage to his ancestors. “It was really important that a person of color was doing this tattoo, and not a white person,” Garner says. “Because to him that would have been totally unacceptable.”
“Invisible Man Tattoo” is not the first time Garner has embedded a tattoo shop within an exhibition. During her 2017 show “Doctor’s Hours” at Larrie, a storefront gallery in Chinatown, she took tattoo appointments, and displayed flash that was chiefly anatomical—skulls, bones, lips and teeth, stomachs and spines. Also on view were her drawings, photographs, and sculptures, all depicting pieces of a body—variously adorned with jewels, bristling with needles, or  violated with medical instruments. The most striking of these are her glass sculptures, which dissolve the boundaries between glamour and the macabre with their glittering surfaces and tendrils of hair.
“Being in the art world, then being in the glass community, then trying to assert myself in the tattoo industry—all these white, male-dominated spaces,” she says, “I want to break down these false ideas that we’re not allowed in these spaces or these types of practices.” 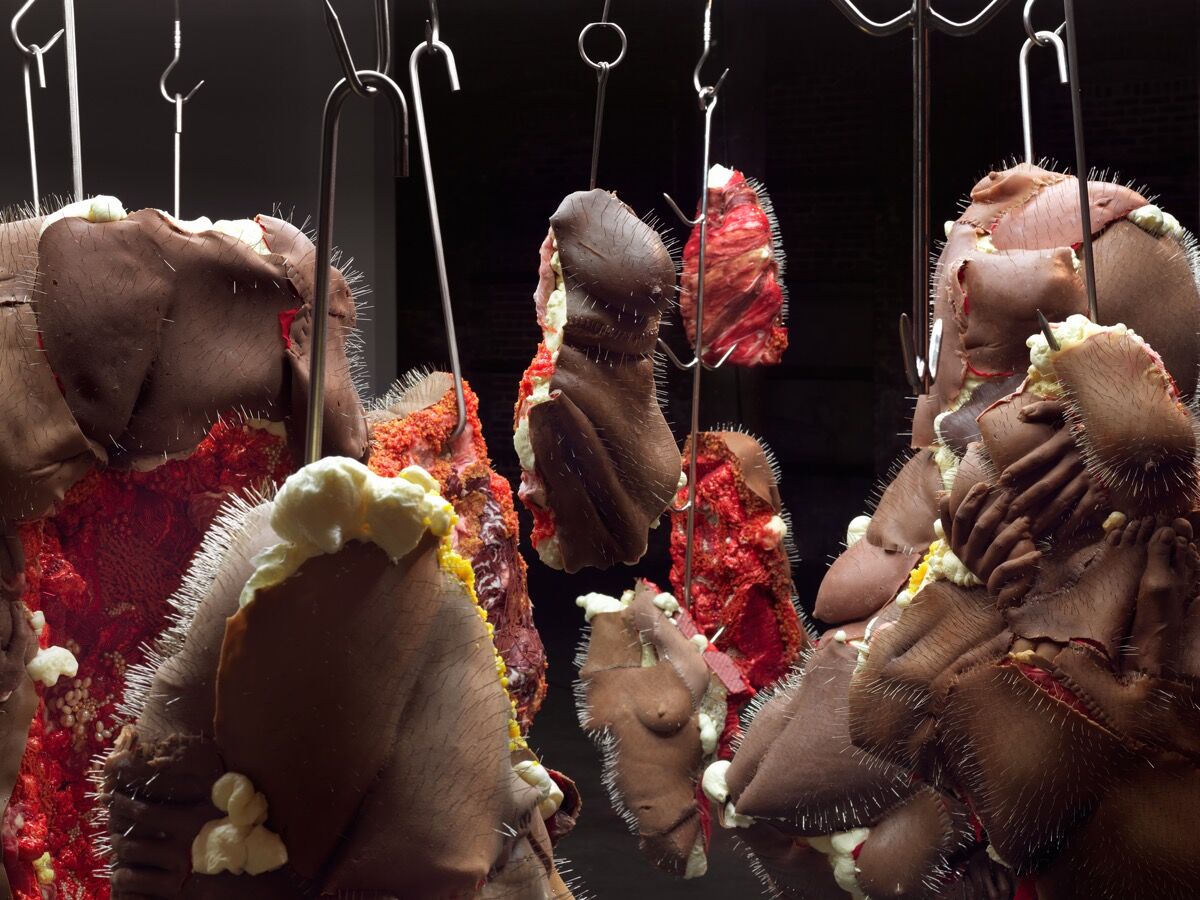 Installation view of Doreen Garner’s work in “White Man On A Pedestal” at Pioneer Works in Brooklyn. Courtesy of Pioneer Works.

Garner’s interest in medicine is focused on the history of violence that women of color have endured in the name of scientific racism, and the suppression of their stories. She explored this concern explicitly in “Doctor’s Hours” as well as in the 2017 two-person exhibition “White Man on a Pedestal” at Pioneer Works with
Kenya (Robinson)
, for which she constructed—and then dissected—a statue of Dr. J. Marion Sims. (Sims, a 19th-century physician often described as the “father of modern gynecology” performed medical procedures on enslaved black women, who he operated upon without consent or anesthesia. Following protests this summer, the City of New York now plans to relocate his sculpture from Central Park to Sims’s gravesite in Green-Wood Cemetery in Brooklyn.)
While this concern is less explicit in “Invisible Man Tattoo,” there are hints. One is Harriet Washington’s 2006 book The Medical Apartheid: The Dark History of Medical Experimentation on Black Americans from Colonial Times to the Present, which you can browse in the shop’s waiting area. Another, among the tattoo designs, is the name “Anarcha”: one of the enslaved women on whom Sims experimented.
Garner’s exploration of how tattooing can converge with her art practice continues to raise both troubling and fruitful questions for the artist. “Because I’m celebrated mostly as a sculptor, I’ve been trying to think of the tattoos as artwork and of the clients as art collectors,” she explains. “What does it mean to collect a piece of art that you can’t auction off? Or if you do auction it off at some point, how does it accrue in value? Does that mean that you have to remove that part of your skin to sell that work?” And again, like any good surgeon, her thoughts return to the cutting and slicing of flesh.
Ariela Gittlen
Related Stories