The Artist Who Chronicled the Bronx Graffiti Boom in the 1980s 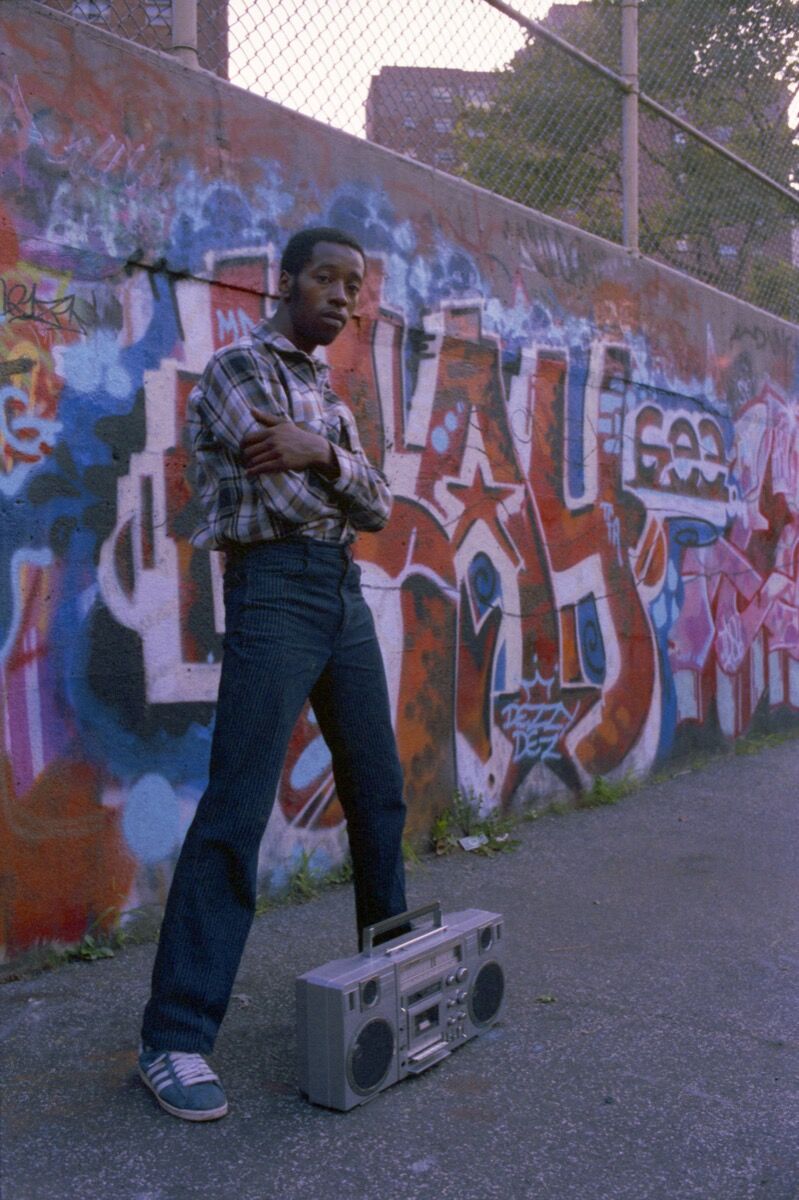 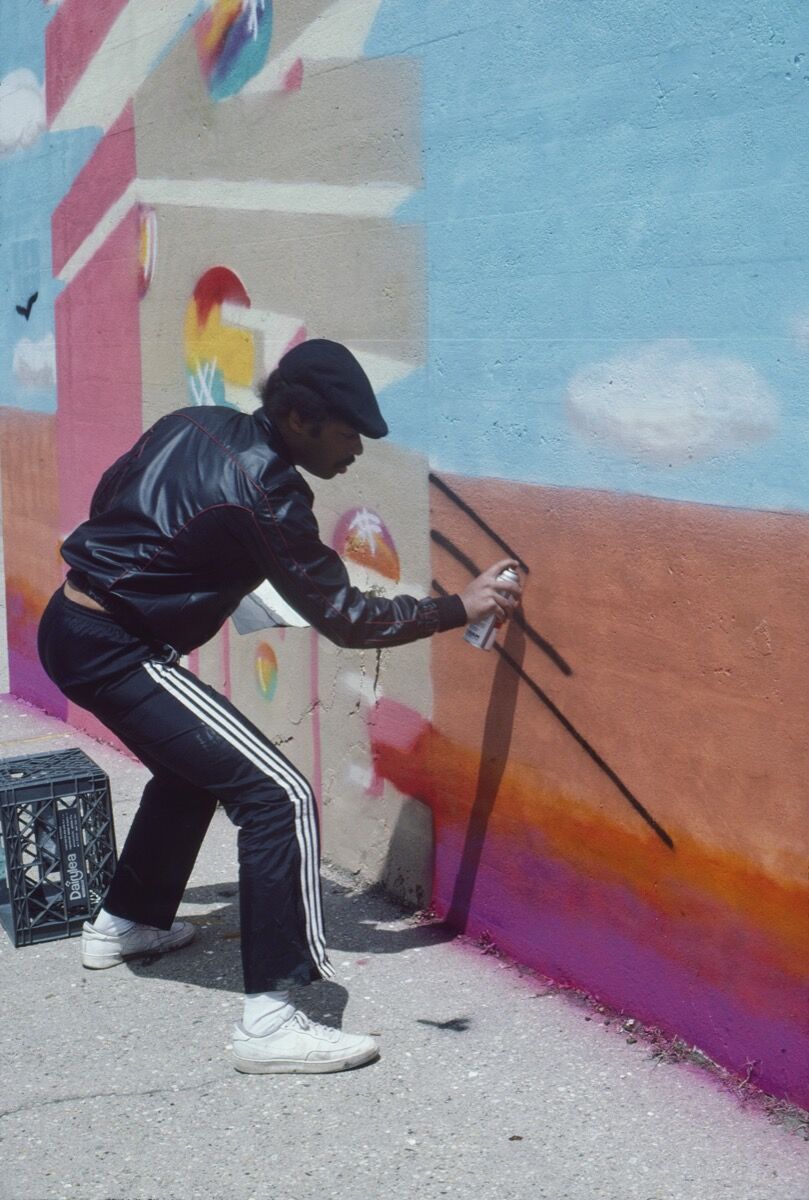 This article is published in collaboration with Kickstarter. Kickstarter helps artists, musicians, filmmakers, designers, and other creators find the resources and support they need to make their ideas a reality.
No one invited
Henry Chalfant
to document the rise of hip hop culture, and South Bronx residents often greeted the white, Stanford-educated sculptor with skepticism. At first they thought he was a cop; later, he received criticism that his PBS special, Style Wars (1983), generated so much attention that it changed graffiti as an art form.
Stifled by the isolation of his studio in downtown Manhattan, Chalfant headed uptown to see the neighborhood’s proliferating public art, from graffiti to breakdancing. He took up photography, and eventually became a definitive historian of hip hop culture. “First are the artists,” Chalfant said. “I came along and amplified....I was totally an outsider, but my curiosity was such that I went out to these neighborhoods to try to get pictures and to try to understand.”
On September 25th, the Bronx Museum of the Arts will open the first U.S. retrospective of the photographer. Street artist
SUSO33
originally curated “Henry Chalfant: Art vs. Transit, 1977–1987,” for the Centro de Arte Tomás y Valiente in Madrid. Now, with help from a Kickstarter campaign, they’re bringing it home to the Bronx.
Here, Chalfant shares the stories behind some of his images and details how new forms of public art rose from abandoned and untended civic spaces. 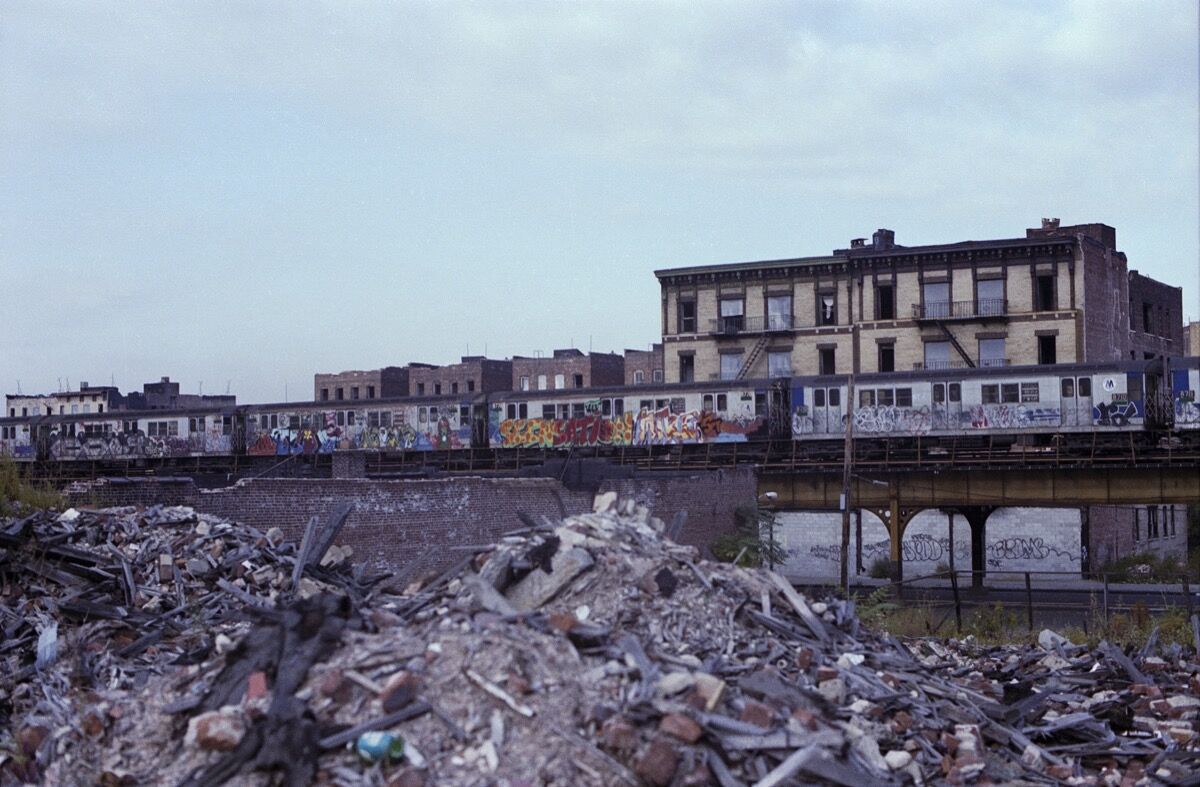 “The buildings were abandoned, they were burnt to the ground,” Chalfant said of the Bronx’s derelict blocks. “Neighborhoods were redlined by the bank. The landlords couldn't improve their buildings, so they would burn the buildings and get insurance; it was insurance policy industry-wide at the time to pay people, no matter how the building burnt down.” When the policy ended in 1982, he continued, the fires stopped. 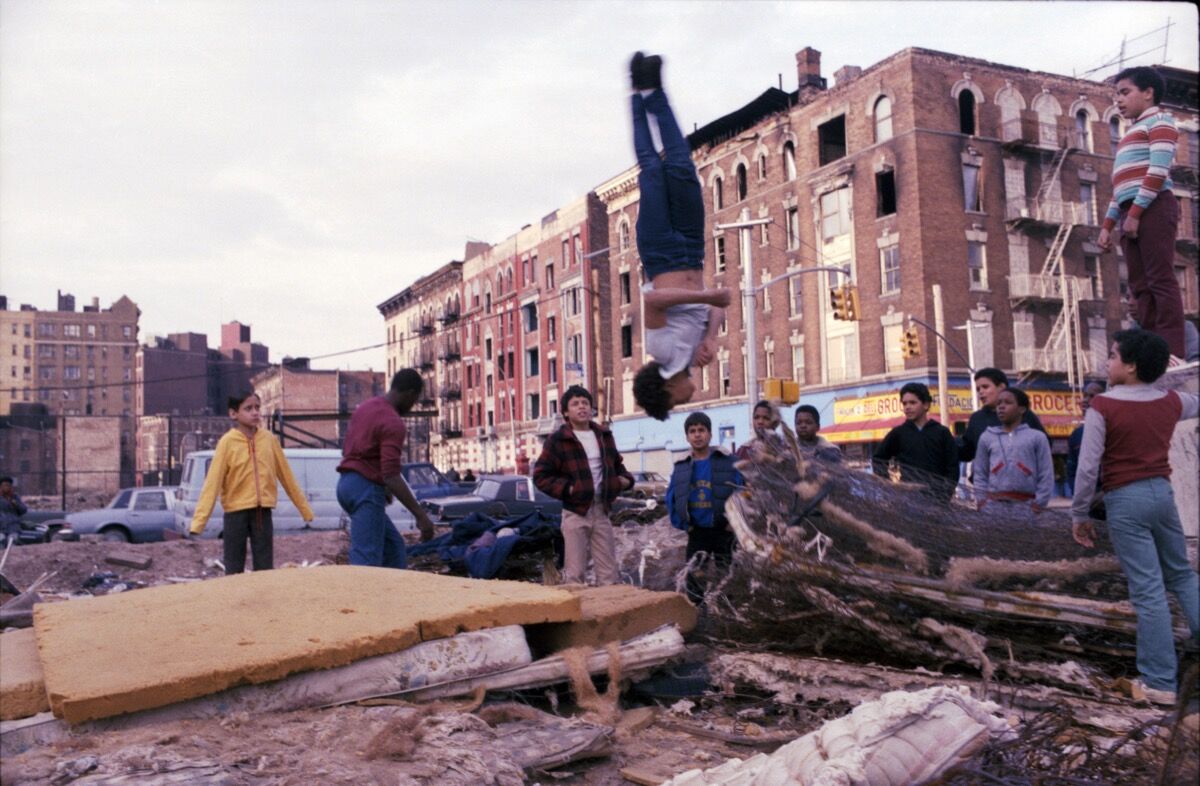 Advertisement
“This is youth creativity under stress,” Chalfant said of this photograph of youth playing in an empty lot. “Jumping upside down over mattresses and box springs emblematizes to me [how] in the absence of places to play, afterschool programs, they invent their own.” He continued: “All the things you think of as hip hop came from rubble-filled vacant lots, train yards, and asphalt-covered playgrounds in the Bronx.”

“I think this was painted by Dez, kind of an homage,” Chalfant said, when discussing this image of a tagged subway car. “I know for a fact that they went painting together, Freeze and Dez, and they painted this car. Due was crew member of Dez’s; Elkay was the younger writer who went along and probably helped out.”
“A lot of trains were painted by groups of kids,” Chalfant continued. “The social life of the graffiti writers was to belong to a crew.” Crews operated in a similar way to gangs, he said, but without the violence. “There was neighborhood loyalty, or at least loyalty of friendships, involved in the formation of these groups.” 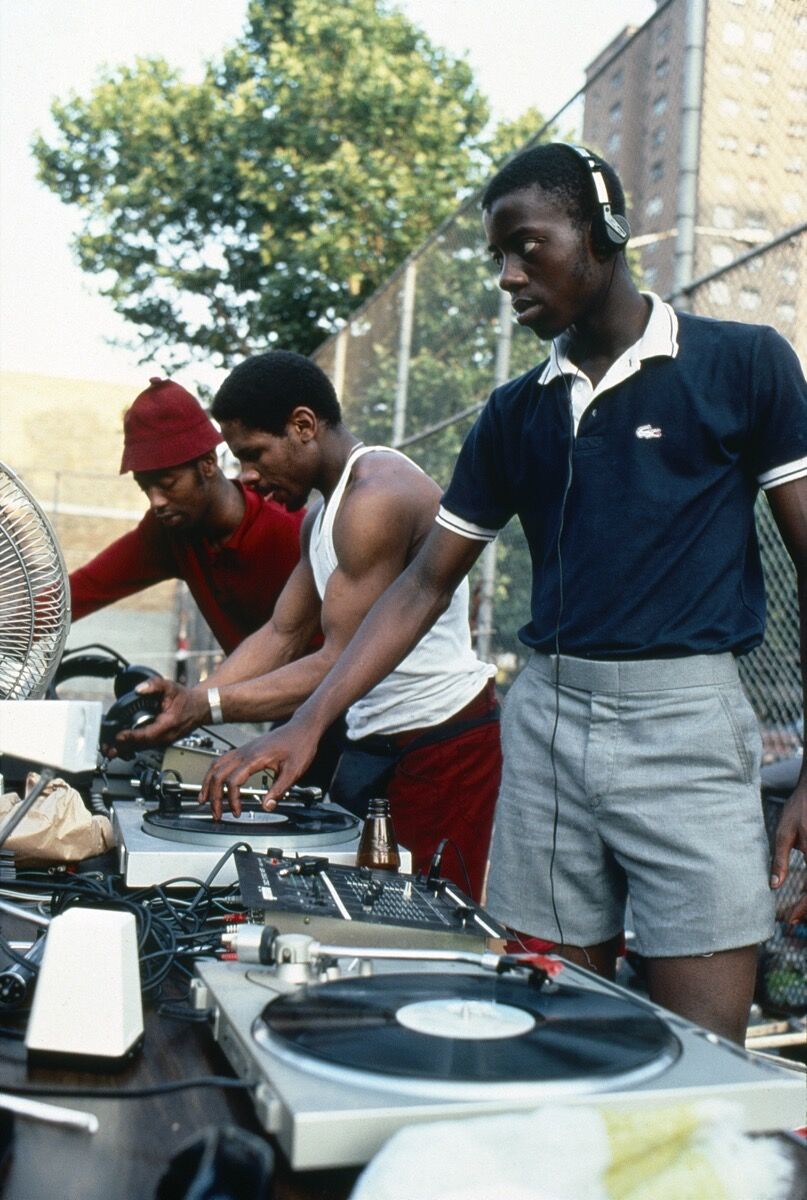 This photograph shows friends setting up for a neighborhood park jam. “You would tie into the lamppost for your power to hook up your DJ table and hook up the speakers and then you would blast your music out,” Chalfant said. “You get what you can, you make it out of what you can, and if it’s not available, you steal it. Whatever you do, you use the city.” 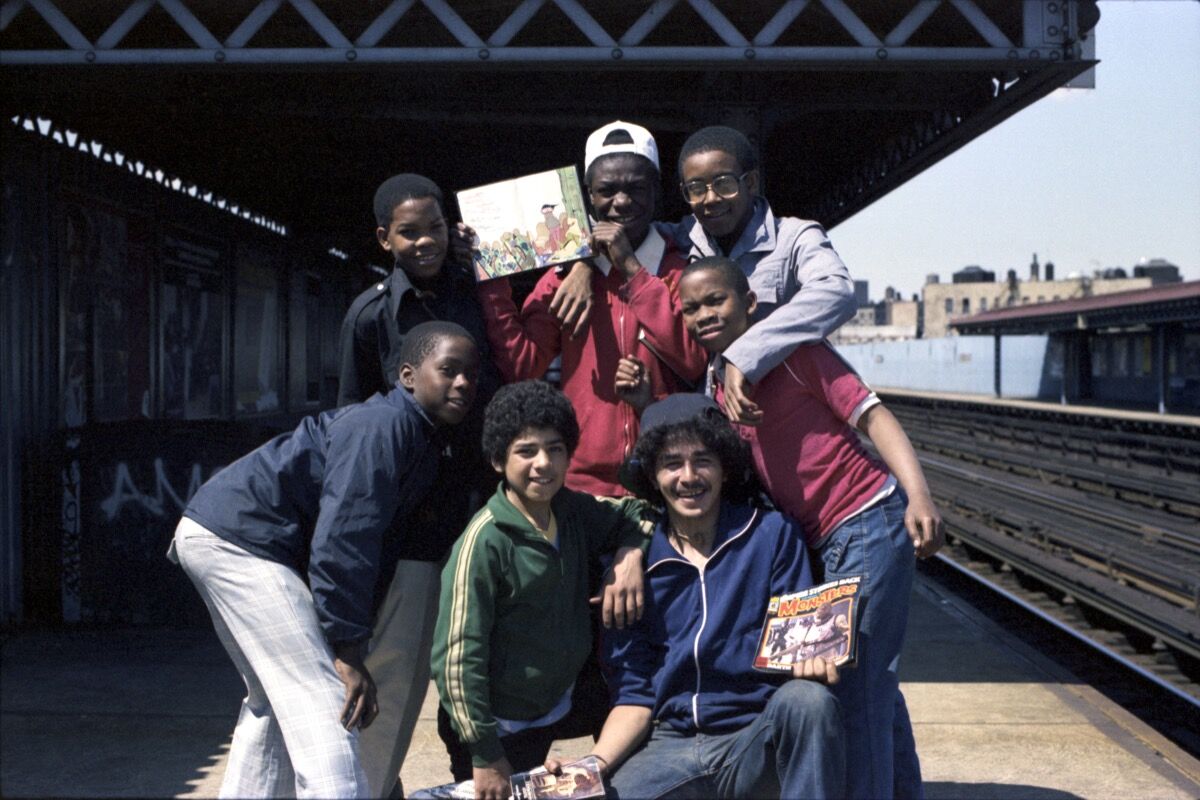 Chalfant occasionally bumped into groups of graffiti writers on the subway platform, like the group in this image. “I didn’t [run into them] for a couple of years while I was taking pictures—I was hoping to,” he said. “I learned later they had seen me and they were suspicious because I was about twice their age and Caucasian, so looked a lot like a cop, so they didn't want to get mixed up with that.” 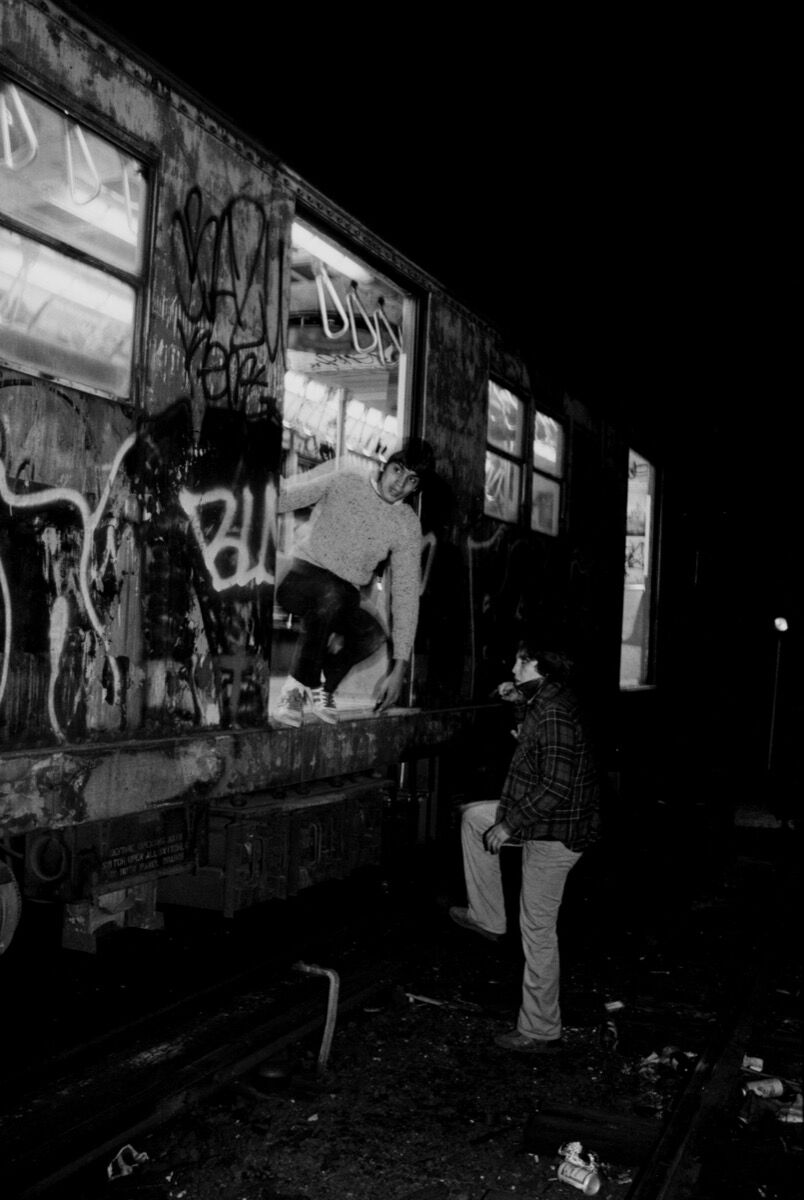 Graffiti writers typically didn’t start painting until around 10:00 at night, Chalfant noted. “At the time, the police were saying graffiti was an entry-level crime—you start out writing graffiti and it was a slippery slope,” he said. “But more often than not, the people involved in graffiti didn’t get involved in drug dealing and carrying weapons. They were much more interested in painting and becoming good painters.” Chalfant’s collection proves the point. Writers like
Blade
,
Lady Pink
,
Crash
, and many more went on to illustrious art careers. 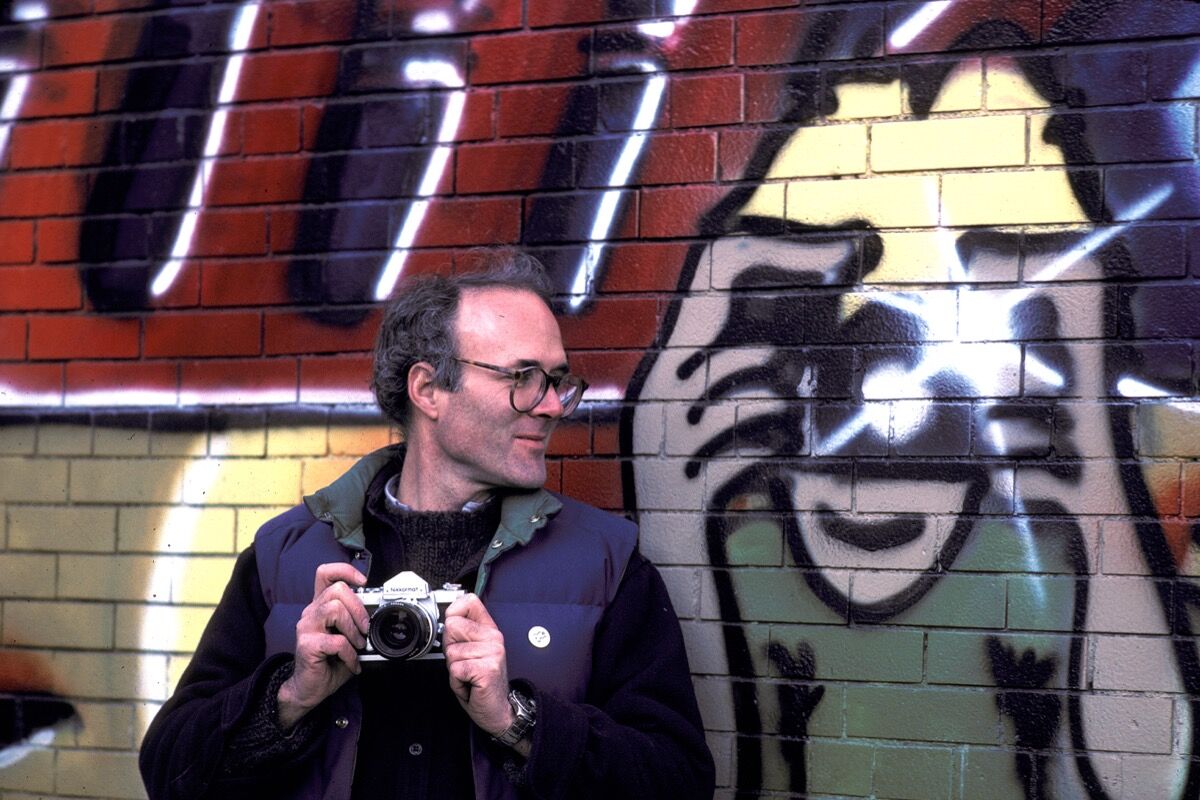 Henry Chalfant next to his portraitnon the set of Style Wars. Photo © Martha Cooper 1982.

Though Chalfant said many graffiti writers embraced his role as a documentarian, when Chalfant joined director Tony Silver to produce Style Wars in 1983, it gave the movement unprecedented exposure—though that wasn’t entirely positive.
“Audiences were divided almost down the middle,” said Chalfant. “There were those who considered it art and those who considered it vandalism.”
The people in their film had mixed reactions, too. “The fact that we were taking photographs of what was going on changed things, and it wasn’t always for the better,” Chalfant said. Kids didn’t have to hone their talents on train cars; they could study his photos instead. “[The artists] saw that as a threat to their originality. Me, Martha Cooper, and other filmmakers were thinking, ‘Well, we are actually altering what was a kind of culture, so we're actually part of the process of destroying it.’ Of course it’ll be replaced and recreated elsewhere, but we did have that sense that what we were doing was not all good.” 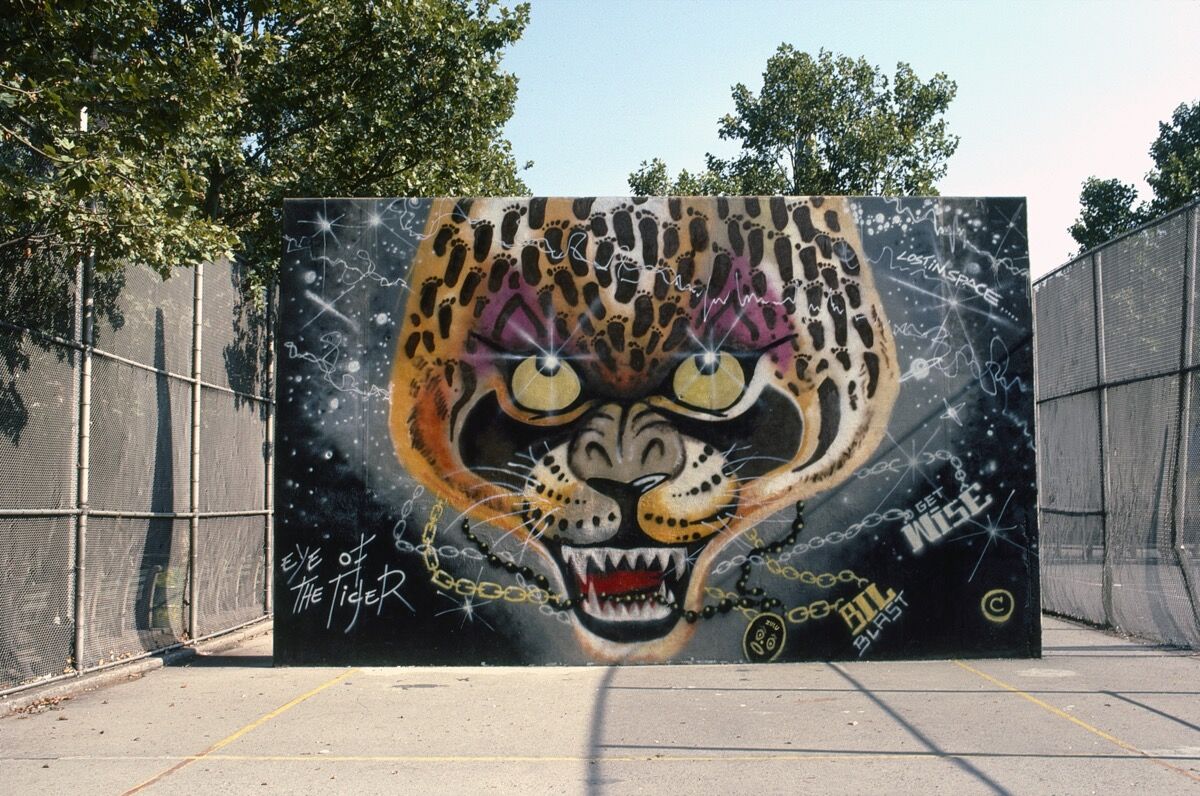 Chalfant watched the artistry of street murals gradually gain mainstream acceptance. For example, as breakdance crew Rock City gained media attention and started touring, artists they associated with were able to paint in the light of day, without fear of being arrested or painted over.
“You could call this is a precursor to street art in general, which usually has some kind of tacit permission,” he said.
Correction: An earlier version of this article incorrectly referred to one of the graffiti artists Henry Chalfant identified when discussing the work Freeze Elkay Due as Dev. The artist’s name is actually Dez.
Katheryn Thayer is the director of content at Kickstarter, where she produces stories about the artists, designers, and inventors bringing new ideas to life.
Related Stories