The Artist Who Conjures Beauty from Refuse and Rust 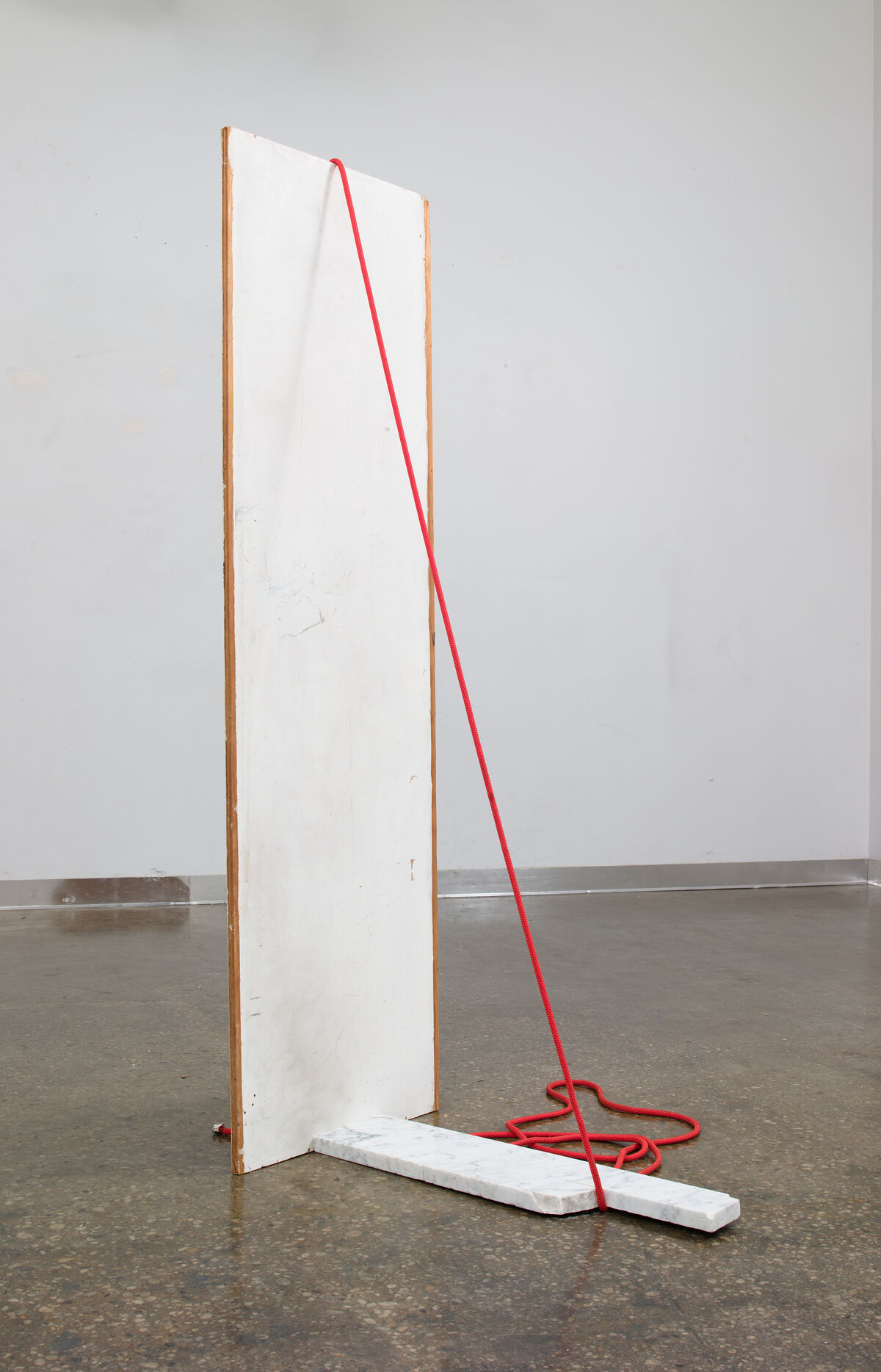 Sure,
Virginia Overton
is an artist. But she’s also an amateur aquatic botanist; a collector of broken machinery; and a haggler over tree trunks, metal trusses, and tow-trucks from New Jersey. It’s fairly likely that she hasn’t set foot in a typical art supply store in recent years. Why should she? Overton’s domain is the scrapyard, the warehouse, the wider world with its avalanche of refuse and rust. Her work is quietly heroic, despite being battered. She borrows the language of
Minimalism
, and of the readymade, and births it into something stranger—like a fat hock of Spanish ham slowly gyrating over a metal pipe, or a 1996 Toyota Hilux, disassembled and reordered into a scrappy totem.
When I meet Overton at Socrates Sculpture Park in Long Island City—where she’s busy installing a sprawling outdoor solo show, “Built,” that will open on May 6th—she’s wearing a Carhartt work vest and standing next to a pick-up truck. The truck is part of the art. A beat-up upholstered chair nearby is not—or at least, not yet. “It may go in the dumpster, or it may go somewhere,” the artist tells me, her Tennessee accent syrup-thick.
Many objects have a similar fate in Overton’s world; the line between useless and useful is fuzzy, and prone to change. “I want these things to continue working,” she says of her materials, whether that’s an old roofbeam or a piece of trashed Plexiglass. It’s an impulse Overton traces back to her upbringing on a farm outside Nashville, Tennessee. As a result, her art practice is a thrifty one, full of canny upcycling. 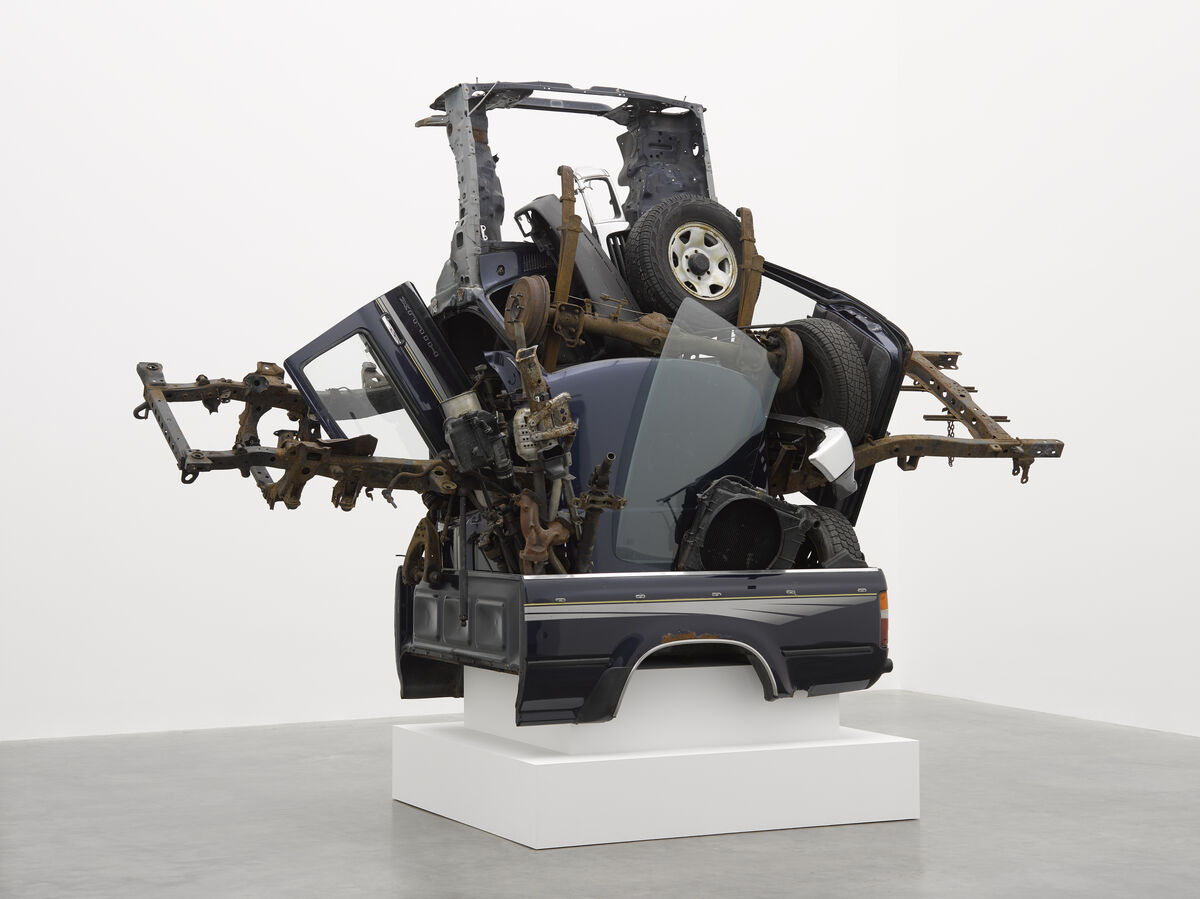 For instance, the Dodge Ram 150 pick-up truck at Socrates has had several past lives, popping up as a component in exhibitions from Montauk to Miami. (At Socrates, she’ll fill its bed with water and a multitude of lotus flowers.) Other elements in the exhibition have similarly disparate resumes. A giant steel drum nearby was originally used to ship airplane engines before it ended up in Florida and became a recycling bin. Overton bought it off a guy there in 2014, using it as a sculptural water receptacle for “Flat Rock,” an exhibition at the Institute of Contemporary Art Miami (ICA). She’s resurrected it for Socrates, where its battle-scarred mass will be coated with white reflective road paint and dangled from the back of a tow-truck, like a “giant mobile,” she says.
Overton doesn’t think of herself as working with readymades. “It’s not like I just turned a bottle rack upside down or something,” she explains, alluding to
Marcel Duchamp
’s 1914 provocation. “I do stuff to them, even if it’s the relationship of one found object to another.” When confronted with an item that still has creative potential, Overton says that she finds herself wondering: “Why would somebody throw that away? There’s still so much you can do with that.”
Her acquisition process seems to involve a lot of bemused exchanges with people who aren’t quite clear on why she wants their junk. That can work in her favor: The wood that went into constructing a giant gem-shaped sculpture for a show in Tucson, Arizona, cost her a mere $55. Overton doesn’t mind a bit of shabbiness; she has a way of making qualifiers like “decrepit as shit” and “total crap” sound almost loving. Advertisement
The artist, 46, has taken a winding path to get to this point. After leaving Tennessee in her early twenties, she rambled. There were stints in New Mexico (working as an assistant to a feminist artist) and a teaching job at a Quaker school in North Carolina; she spent over a decade chipping away at her undergraduate degree, bouncing between five state schools in Tennessee. She finally got her BFA in 2002 at the University of Memphis, then stuck around for graduate school. “It was what I needed,” she says. “I learned a lot of skills—I ran the foundry, learned how to weld, and work with wood.”
Circa 2004, she relocated to New York, where she shared a studio with
Olivier Mosset
and
Chuck Nanney
that had previously been occupied by the late
Steven Parrino
. “I didn’t know I would be making shows,” Overton says of her decision to come to the city, which had more to do with seeking a new cultural climate. “I was just like: ‘I’ve gotta get out of the South.’”
She showed steadily, and was included in the 2010 “Greater New York” survey at MoMA PS1. A solo exhibition at The Kitchen followed, as well as others at galleries like White Cube in London and Mitchell-Innes & Nash in New York. For a 2013 show at the latter, she constructed an imposing wall of red cedar planks (sourced from the property around her childhood home) and a ramshackle sculpture for which the artist MacGyvered a semi-functioning jacuzzi out of a coffee machine and a beat-up bath tub. “It was activating the space in a way that felt like there was a lot there,” she says, “without very much being there.” In 2014, she installed a nearly 500-foot-long outdoor brass handrail at the Storm King Art Center. Other shows—in Zurich, Memphis, San Francisco, and elsewhere—gave her further opportunities to explore: to suspend a simple tree trunk from a metal armature as if it were a valuable relic; to install windmills and foster an environment of aquatic plants, as she did on a terrace at the Whitney Museum of American Art in 2016. She’s now represented by Bortolami in New York, which is in the process of planning a future solo debut with her.
It’s tempting to typecast Overton as a “Southern artist,” given her choice of materials. But even when working with something as loaded as an old pick-up truck up on blocks, she’s striving for something that reads more universally. “People have trucks all over the world!” she says. “It’s funny—when I talk to people, because I have this Southern accent, it becomes a regional kind of expression. For sure, my history and upbringing play into what I make and why I use things over and over again, but it’s more about economy of material, or getting as much value out of something until it’s just not usable anymore. Because I make things wherever I go, in some ways they take on the language of wherever I am.”
That flexible, on-the-fly method of working can be exciting, but also a little stressful. For “Why?! Why Did You Take My Log?!?!”, her 2017 show at the Museum of Contemporary Art Tucson, Overton, had a little over two weeks on-site to conceive and execute new pieces. She recalls being awake at 2 a.m., piecing together a small-scale model of what would become the exhibition’s largest sculpture using plastic coffee stirrers and first-aid tape. “There were three other artists installing at the time, and they were nervous for me,” she laughs. “Artists get so nervous for me! I’m like, ‘It’s okay, it’s gonna be fine.’ I mean…hopefully. You never know, but that’s also part of it. I wouldn’t say that every single thing is a success. And that’s okay. Even if I spent months and years planning something, it doesn’t mean that it’s going to be a success, either.” 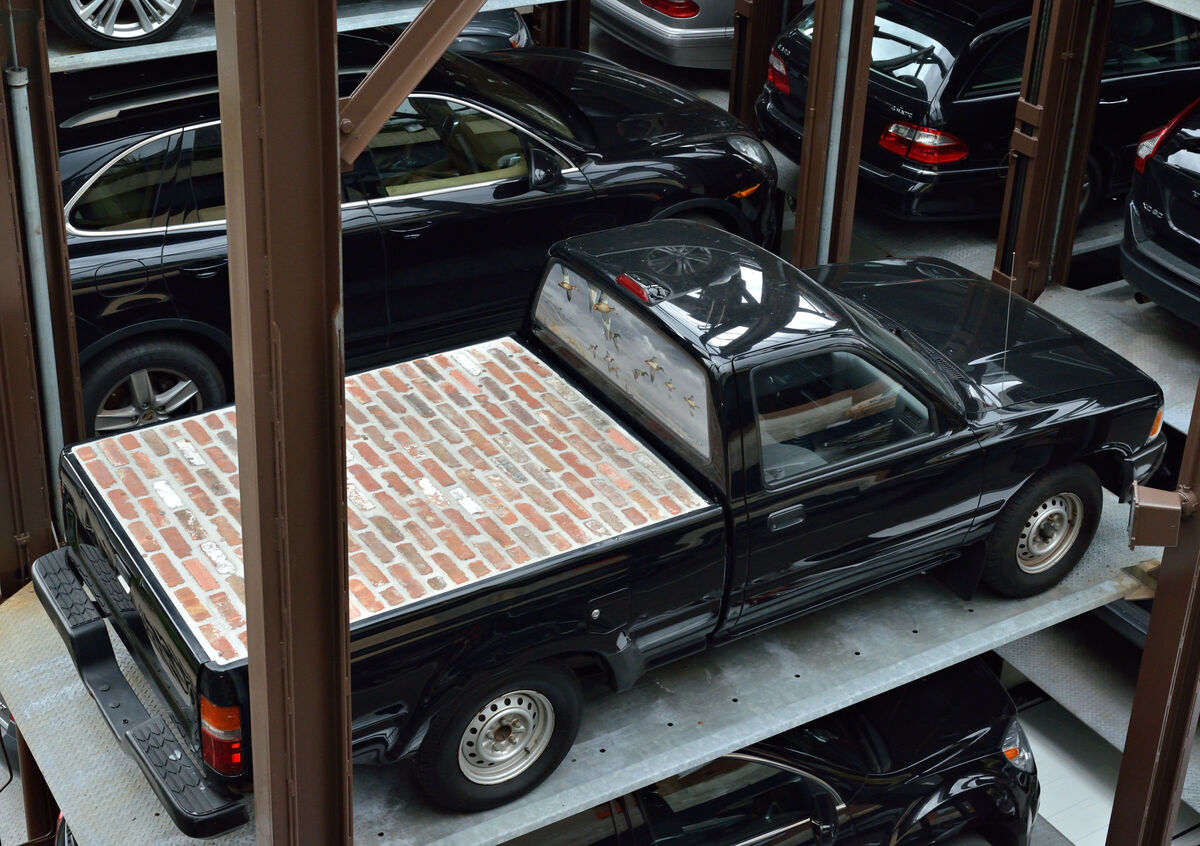 Meanwhile, “Built” has been slowly coming together in Long Island City. Overton has been amassing additional materials over the past six months, gradually adding them to the mix. She compares the process to baking: “You get the ingredients out on the counter, it looks like not much is a happening—and all of a sudden you’ve got a cake.”
There are steel roofing trusses sourced from Philadelphia, and a piece of plexiglass found by the side of the road. One of the sculptures will include a found object plucked from the Socrates site itself: A large gantry, used to lift and move heavy materials. Since artists commissioned by the park often do much of their work outdoors, in public view, Overton’s exhibition promises to create interesting confusions: Which parts are the art, and which are the tools used to make it?
The artist’s utter lack of pretension is refreshing; she comes across as someone committed to constructing things—however strange or inexplicable—solely for the sheer joy of making. Sometimes her pieces are exhibited and then stripped apart and reconfigured: “Yeah, I’d pretty much take any sculpture apart and use it again,” she says, a sentiment that is nicely at odds with the demands of the market. She might fill up the back of one of her trucks with mortared bricks and exhibit it on the High Line, as she did in 2012, then scrap the bricks and start driving the vehicle again. (“Good thing for Toyotas,” she says approvingly, “they start up even a year after being unstarted.”) She’s grateful for the chance to experiment across the ample acreage of Socrates. “I’ve never had that opportunity, unless you count at the farm where I grew up, where I’d make shit and my parents would be like: ‘What is that?’” she says. Even when visiting them now, Overton adds, she’ll busy herself with offbeat sculptural tasks—affixing a ladder to the side of their house, for instance. “You want to keep those wheels greased,” she explains, in a way that suddenly makes you want to to go tie a ladder to your own house, just to see how it feels.
Overton tells me that, when she was a kid, her mom was an amateur painter. Some of that influence seeped in, but so did the lessons she got from her father about how to construct hunting decoys. Her family tree has “a long lineage of people making stuff, whether it’s ‘art’ or not,” she muses. “This ingenuity that’s employed when you’re trying to figure out how to do something that doesn’t have a prescribed method. I would say my artmaking is closer to fixing something, than anything else.”
Scott Indrisek
Cover image, left: Installation view of Virginia Overton, Untitled, 2012-2013, at Edison ParkFast, for High Line Commissions, New York. Photo by Austin Kennedy. Courtesy of Friends of the High Line.
Related Stories