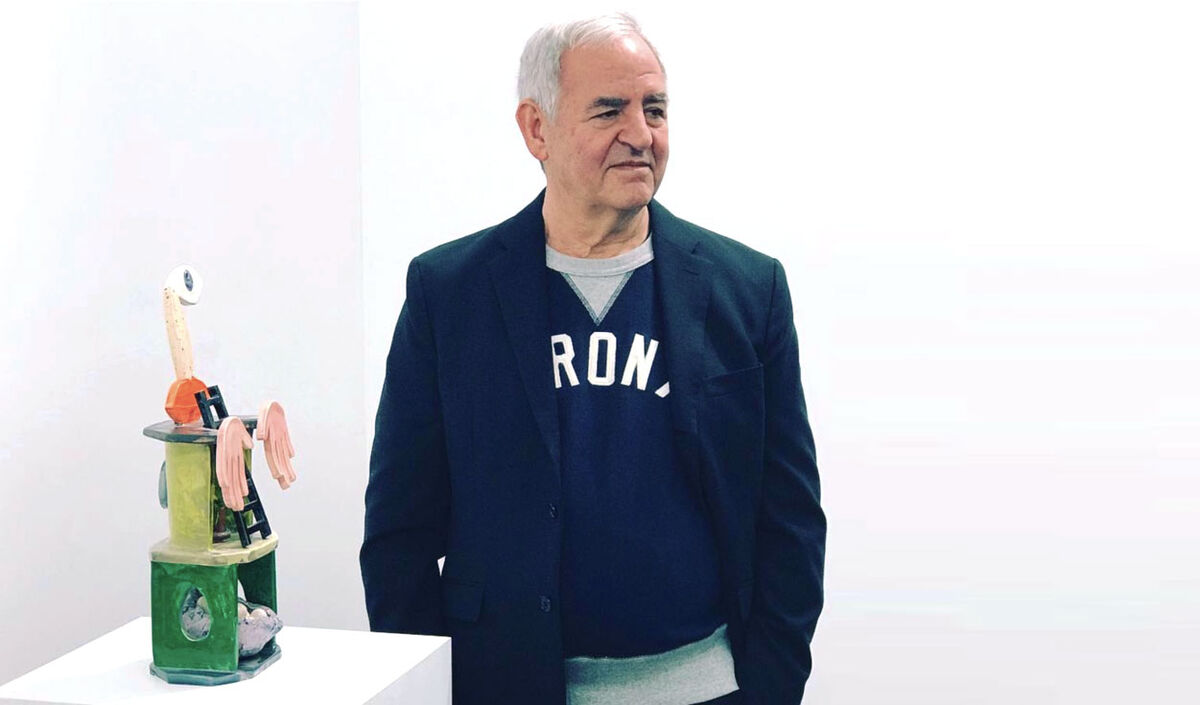 “When you cut into a tooth, which seems very inert, it’s actually a living thing, as is clay,” ceramic artist Bruce M. Sherman tells me. It’s an unlikely talking point for an artist, but not for Sherman, who worked as a dentist for seven years. Today, he uses his scalpel to cut clay, and his artistic practice, ceramics, is thriving.
Already in 2017, Sherman’s playful ceramic sculptures—colorful anthropomorphic forms which embody the levity and wit of the artist himself—have been shown multiple times on two continents. His work was the focus of a solo show at Kaufmann Repetto’s Milan gallery, a fair booth with Nicelle Beauchene Gallery at NADA New York, and as of last week, an exhibition at Beauchene’s Lower East Side gallery. Sherman has another solo show slated for fall with Brussels gallery Sorry We’re Closed, which will also show the artist’s work at Art Brussels this April.
Sherman’s momentum started building over the past five years, largely in step with the art world’s increasing enthusiasm for ceramics. It was also fueled in part by the discerning eye of artist and curator Matthew Higgs, who gave Sherman an exhibition at White Columns in 2014 (which sold out) and a memorable showing at Independent New York last March.
But long before his newfound fame, Sherman has been working with ceramics steadily for over five decades. “Even when I was a dentist I always had a kiln in my apartment,” he says with a laugh. “For many years it was in my bedroom, which was probably crazy.” He took his first ceramics course 51 years ago at the Brooklyn Museum Art School, during his graduate school dental internship. 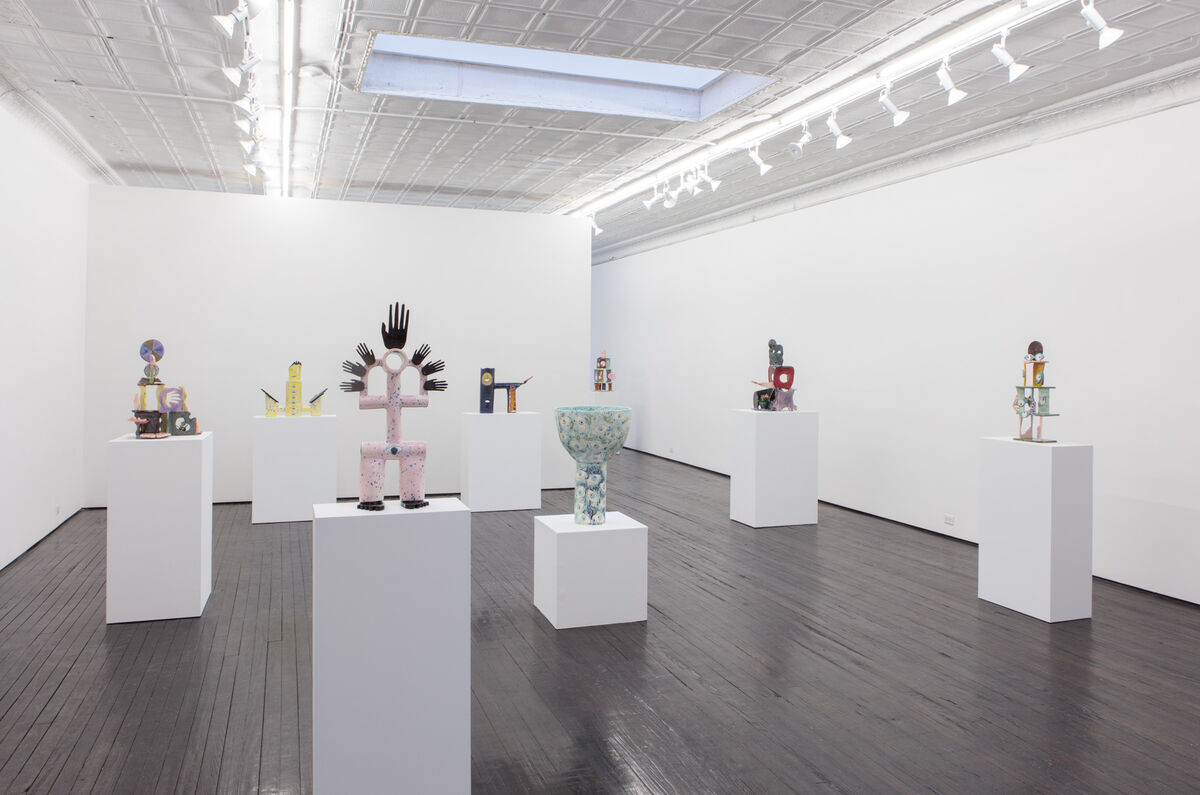 Sherman studied dentistry at NYU, though the work left much to be desired. “I didn’t dislike dentistry, but I didn’t get deep satisfaction out of it like my fellow students,” he says, recalling others’ excitement over patient cases and the prospect of performing a root canal. “It’s nice helping people and making beautiful teeth, but there are only 32 of them.”
And so he quit. Sherman left school with few plans, save for a desire to pursue ceramics and other creative avenues like design—one year he launched a line of lucite furniture. For 15 years in the ’60s and ’70s he was involved in the Society for Experimental Studies, a group of likeminded creatives who worked together to pursue and promote various forms of craftsmanship (Sherman himself engaged with Japanese Bunraku puppetry and stone-cutting). The high regard for craft that Sherman learned in that circle still largely figures into his practice today.
“Crafts were studied in a very meaningful way,” he says, with particular attention to developing a thoughtful approach to creating objects, but also to everyday activities. “If you’re a good craftsman, so to speak, how you wash a dish is as important as how you throw a pot.”
Sherman would later subsidize his creative practice with a part-time job as a professor at NYU’s College of Dentistry, and a stint as a spokesperson on TV and radio for a dental plan company. He went on to found his own, modest dental plan company, which still operates today; it’s afforded him the financial stability needed to pursue art full-time. 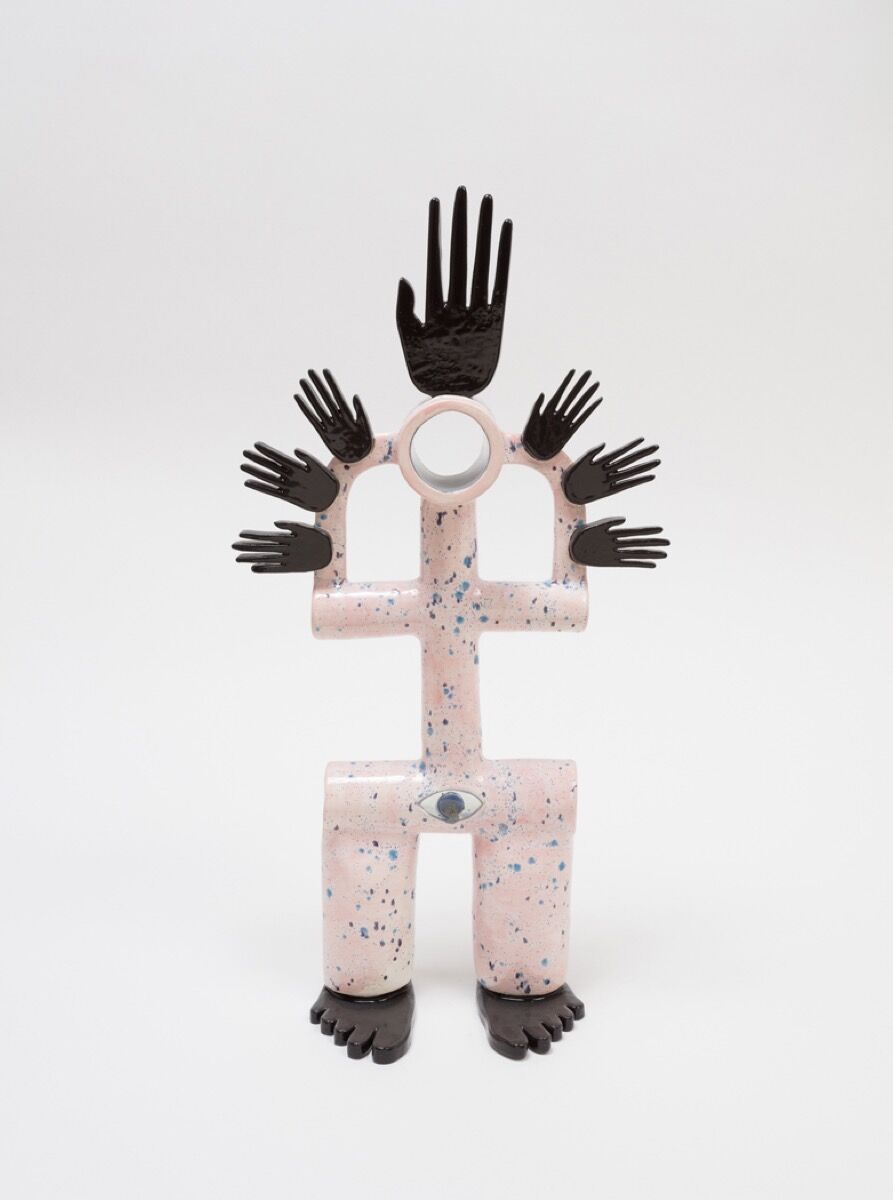 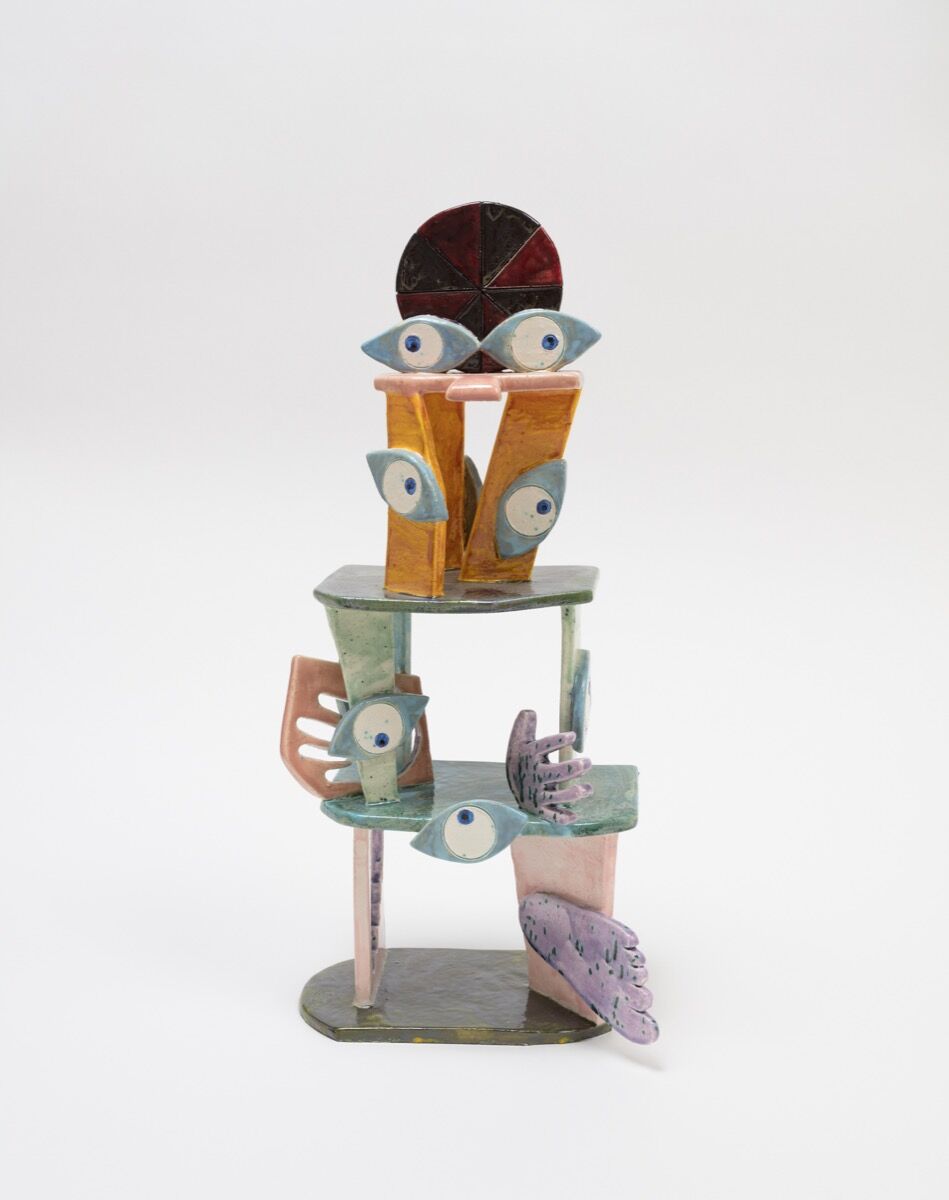 Advertisement
Today, Sherman keeps a studio in the ground floor of an unassuming walk-up in Midtown Manhattan, a few blocks from the home where he lives with his partner, the art dealer and advisor Rob Teeters. The studio is lined with decades worth of sculpture and pots, from large, wheel-thrown vessels to new work like tables and tall, totem-like figures. Much of his process is therapeutic, he tells me, gesturing to a shelf filled with small creatures made from strips and coils of clay. “I think if people did that instead of the computer, they’d be much happier,” he says with a smile.
One wall is lined with jars of commercial glaze, and nearby sits a modest-sized kiln that Sherman uses for all of his work; on the opposite end of the space, a door leads to a secret back room where he keeps a pottery wheel.
It’s a small space, but Sherman doesn’t mind. “I don’t want to be over-productive,” he says, noting that his process is primarily focused on having fun. The genuine joy Sherman takes in his practice, his humorous personality, comes through strongly in his work.
This is evidenced by Sherman’s take on the mythological goddesses The Three Graces, which sees a trio of sculptures of cleaning ladies (one holds a small broom, two have tiny spray bottles). Or a past series, for which he created ceramic pieces inspired by the works of Jean Arp, and attached them to gold poles and stones. “Arp is very elevated,” he says, “my idea was to bring it down to Earth, so it’s ‘Arp on a Rock.’” 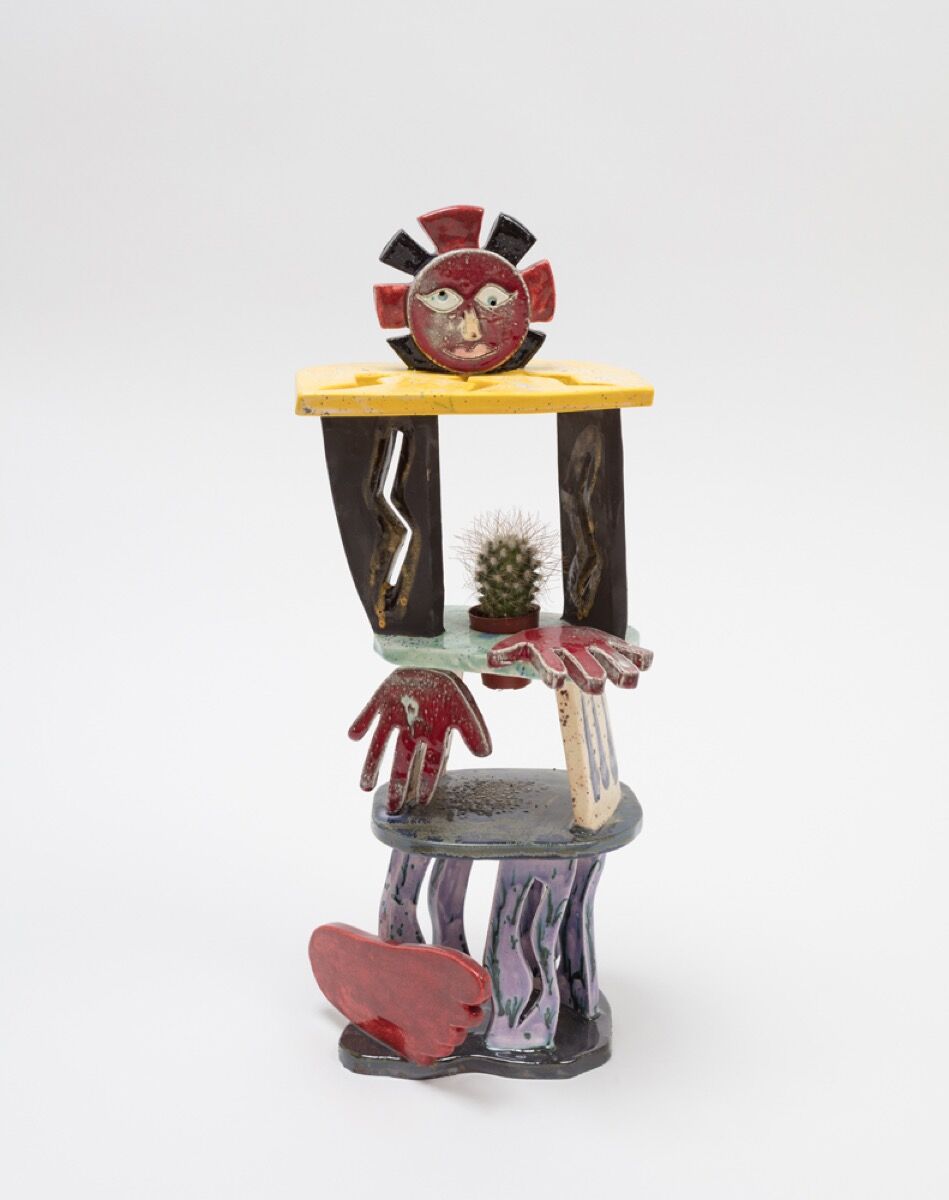 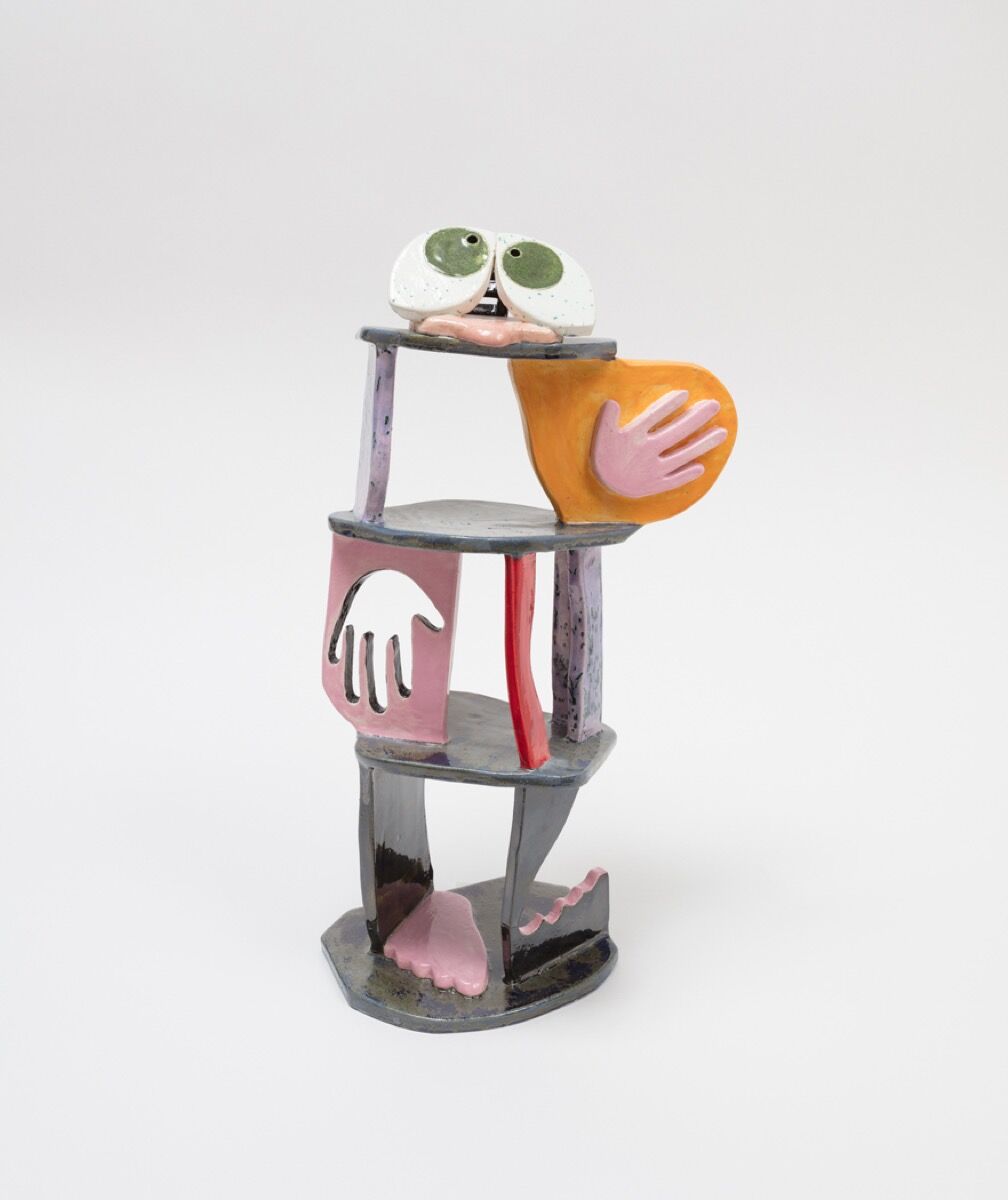 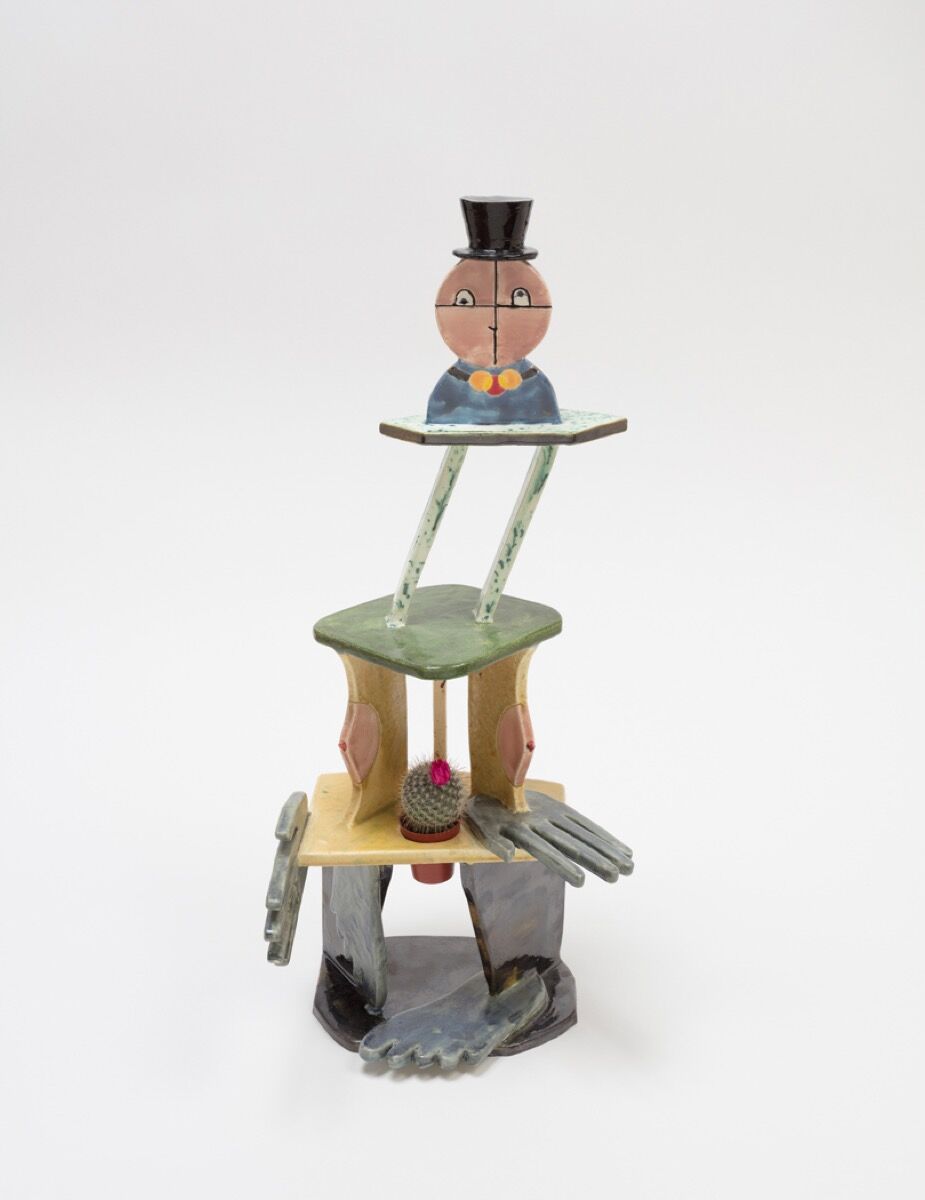 His current show at Nicelle Beauchene, “IS,” speaks to the essential Zen Buddhism practice of being present. Sherman attributes much of his inspiration to this practice, which was central to much his training in ceramics. “Up until recently, I never signed my work, which came from a more Buddhist idea of people working together and not being attached; being honorable to the work and letting go in a certain way.”
He likens the recent works, which are largely driven by impulse, to the 1960s children’s game PlayPlax, for which colored perspex squares can be assembled to build vibrant structures. Sherman’s pieces are primarily made from slabs of clay that he cuts, stacks, makes into tubes, and combines to form people and mythical creatures. Some resemble dollhouses, inhabited by tiny figures, body parts, ladders, and potted plants—some even hold real, miniature cacti.
He experiments with countless glazes, dousing his figures in myriad popping colors and delectable textures, from deep blue and green tie-dye-like finishes to sprays of speckles and translucent, pastel-colored hues.
Eyes and hands are particularly frequent among his figurative sculptures. “The eye has a lot to do with being aware of oneself and seeing; I’m hoping to tell a story visually rather than be didactic,” he says. He gestures to a figure with a tiny pair of eyeglasses and a cap covered in eyes, a sculpture he describes as a scholar, deep in thought. The hands, he says, stress the importance of prayer. “Working in clay is almost like a way of praying.” 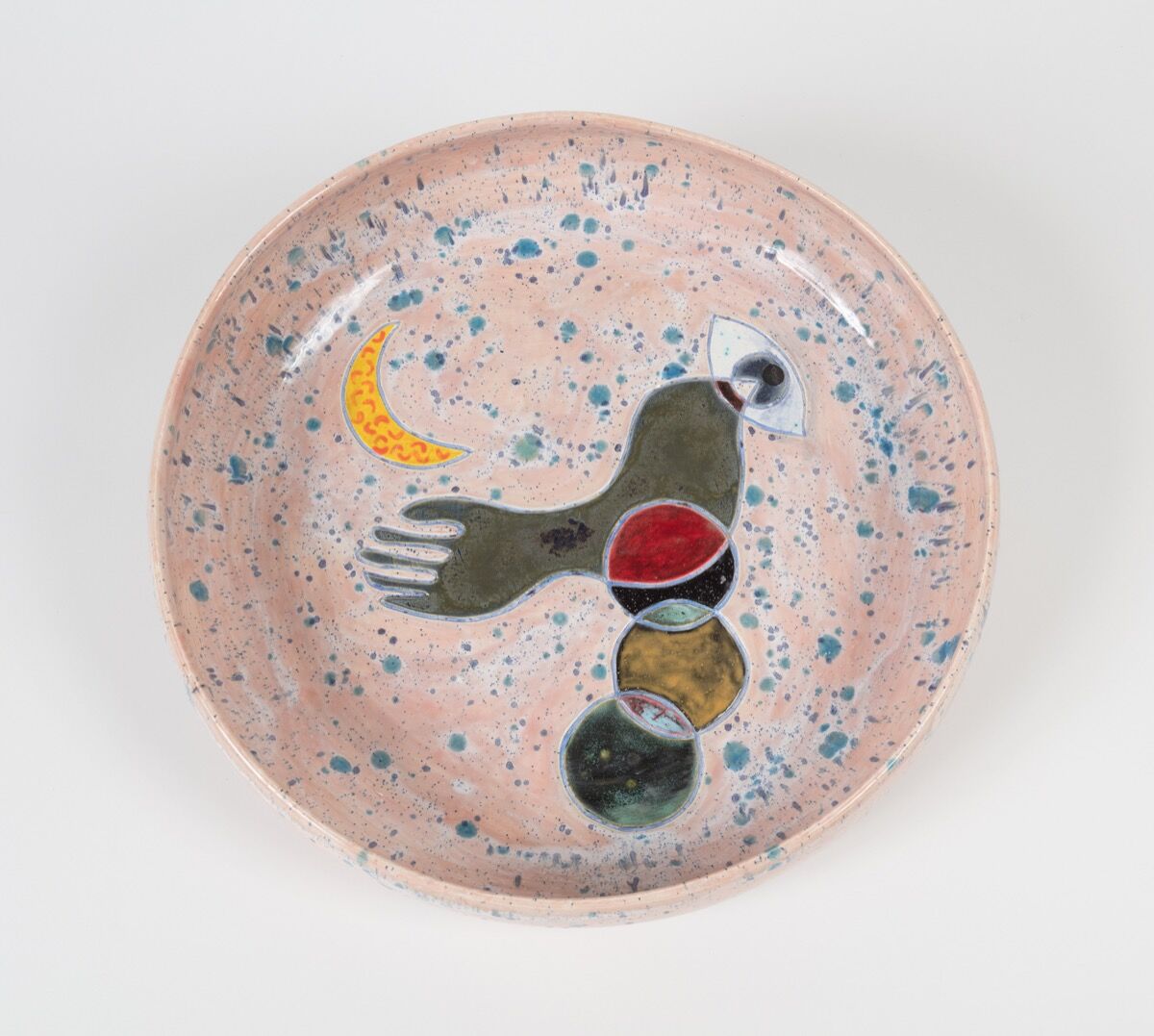 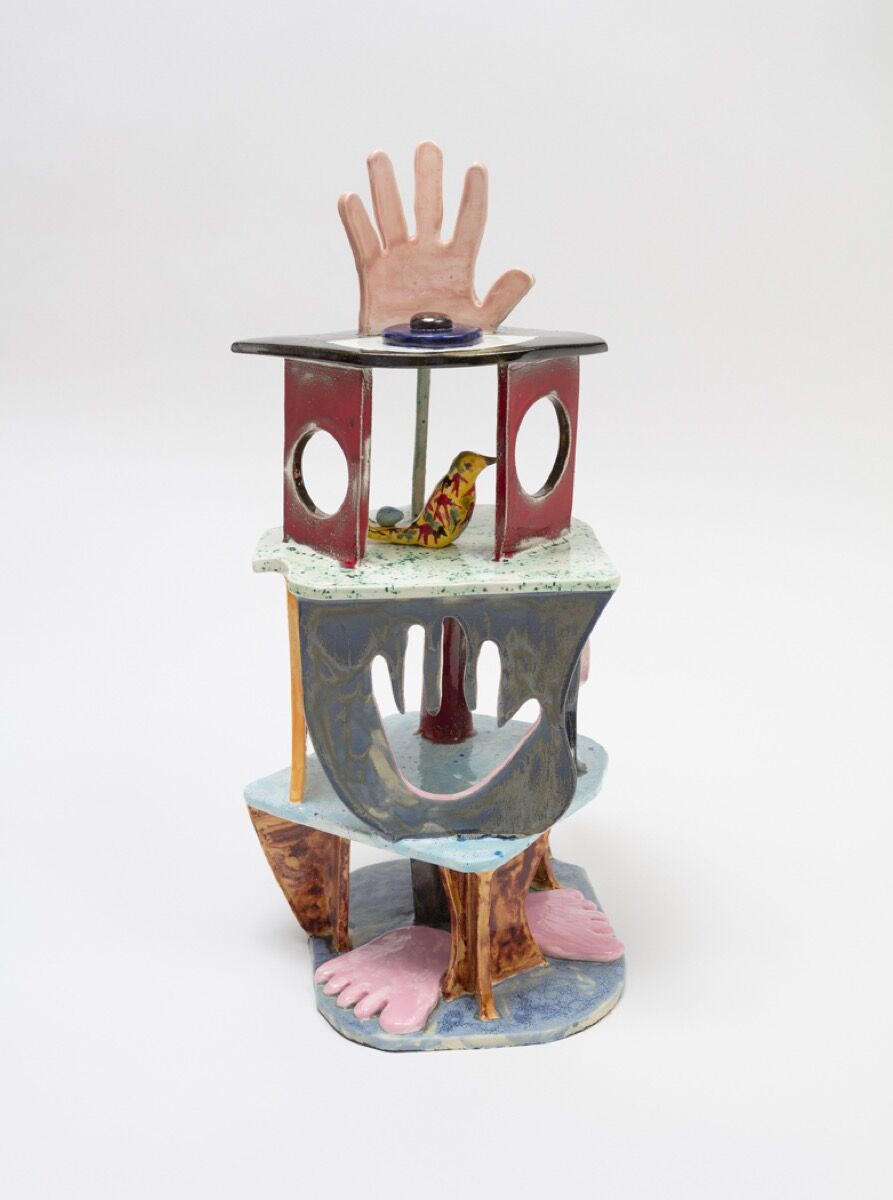 Sherman now looks to the future of his craft. “I’ve been around the art world for many years and ceramics has always been the second cousin,” he says. “I want to elevate it. I feel responsible to do something interesting with clay that respects its history.”
And he’s done just that, which is evidenced in the current show. “I think I’m using clay as just a medium for shapes and forms and colors, and yet I love the idea of a bowl and a vase,” he reflects, nodding to the pigeonhole of craft that ceramic vessels are often limited to. He notes that the Nicelle Beauchene show includes three bowls that are hung on a wall. “I’m very happy about that, that a bowl made it in an art show.”
Casey Lesser is Artsy’s Lead Editor, Contemporary Art and Creativity.
Related Stories