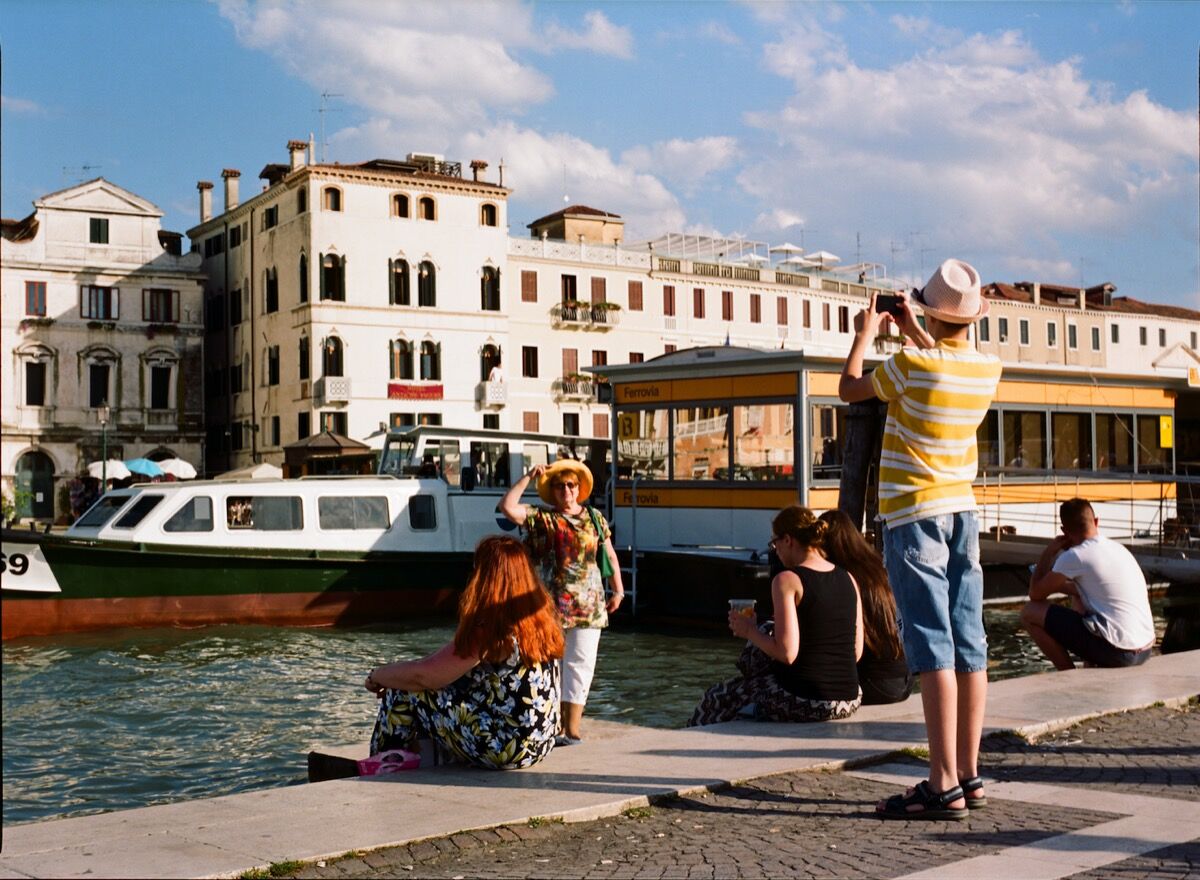 This past summer, husband-and-wife artist duo Andrew Gori and
Ambre Kelly
posted up at the Vatican with two film cameras and one goal: to capture images of tourists in the throes of self-documentation. St. Peter’s Square was rife with potential subjects wielding selfie sticks and striking poses against the backdrop of the Holy See. “In the sea of people, there was a theme that really caught my eye,” recalls Kelly. “A lot of women were posing incredibly sensually, preening, and sticking out their chests in front of fountains that represented the Pope. It was confusing to watch them prop themselves up in this very sexual manner at the Vatican.” It also made for a great photo.
Gori and Kelly, perhaps best known for founding the curatorially driven New York art fair Spring/Break, have been snapping images of travelers in the midst of self-documentation across the globe for the past five years. It all began with a trip to the Colosseum in 2011, around the time that selfie-taking began to skyrocket into everyday culture thanks to the proliferation of smartphones, Snapchat, and Instagram. Since then, the pair have amassed thousands of images of tourists posing for cameras in front of famous landmarks and landscapes, from the Venetian Canals to Mexico’s Mesoamerican pyramids. This week they unveiled a selection of 21 of these photographs at New York’s Equity Gallery.

The duo whittled down their selection from the several thousand images that now make up their “SIGHTSEERS” series with the help of curator Arielle de Saint Phalle. And while the deep-seated but ever-changing tradition of aspirational documentation of the self often plays out in private spaces (bathrooms, a la Kim Kardashian, or beach blankets and beds, a la James Franco), tourist sites provided the perfect public platform for Gori and Kelly to capture a wide range of selfie-documentation. “At these sites, it’s a feeding frenzy,” Gori explains. “Everyone has their cameras or phones out, interacting with what’s behind them in such different ways.”
Unsurprisingly, selfies and selfie-sticks—funny, albeit genuine, trademarks of our time—pop up across the show. In one image, a teenage couple crowds into the frame of their iPhone. He’s wearing a bulky backpack, she’s donning a Minnie Mouse tee-shirt. Mexico’s Teotihuacan ruins sit behind them, but it’s questionable how much of the landscape actually made its way into the shot. In another, a stud of a man stands tall, arms extended and double-fisting his phone, at L.A.’s Griffith Observatory. Gori and Kelly catch him, smiling wide and wearing big sunglasses, with the Hollywood Sign behind him, as he snaps a selfie.
Other images capture more storied tourist traditions—the act of asking someone else, whether a stranger or a friend, to take your photo. In one shot, a son, whose shirt matches a nearby water taxi stand, snaps his smiling, sun hat-decked mother against a bustling and forever-picturesque Venetian canal. Another image shows a portly man in a fanny pack posing on top of Jeanne-Claude and Christo’s Floating Piers, the hit art installation of this past summer, for a camera-bag decorated woman.

Advertisement
The photos are charming, funny, and tender; they also offer a glimpse into the varied motivations of self-documentation. “It’s this wonderful psychological or sociological study for us, to see people documenting a memory or an archive of themselves through these photographs,” explains Kelly. “But are they there documenting themselves because it’s just on their list of things to do and see when you’re traveling? Or are they taking it to that next step, connecting with the layers of what these places signify and where we come from? That range is what’s interesting to us,” she continues.
Surrounded by a culture of rabid photo-sharing and “like”-baiting, fed by Instagram and Facebook in particular, Gori and Kelly’s images indeed raise timely questions. Are we taking photos for others, or for ourselves? To feed our ego, albeit fleetingly, or to preserve meaningful memories? The answer “SIGHTSEERS” gives seems to be a resounding: both. Gori and Kelly don’t make judgements. Instead, they are keen observers interested in how the shapeshifting culture of self-documentation reveals the timeless human urge to preserve oneself, and one’s experiences, through images. “No matter what their intention,” says Gori, “there’s something beautiful about what people bring out of themselves to show a future self.”
Alexxa Gotthardt
Related Stories