Why This Artist Is Growing Desert Plants to Question U.S. Gun Policies 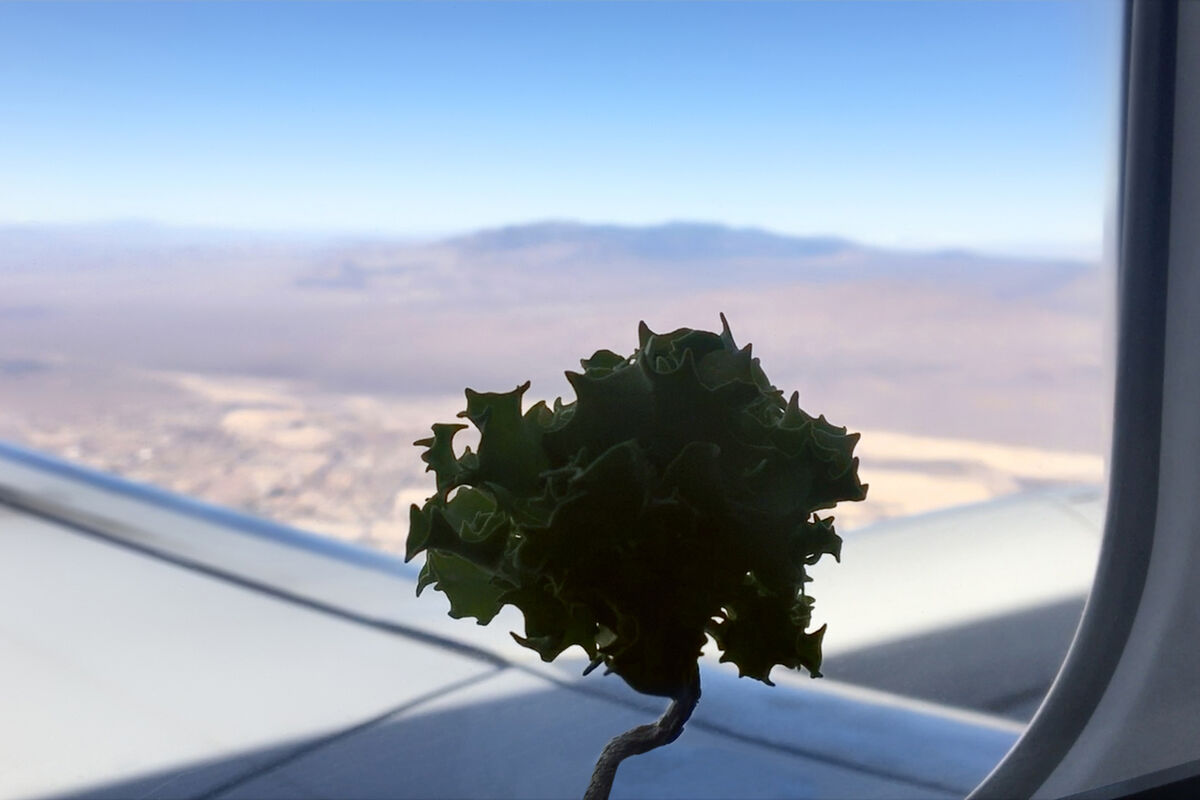 Martin Roth, In November 2017 I collected a plant from the garden of a mass shooter, 2017.

Once I was walking down Grand Street in Chinatown when a large fish landed at my feet. Instead of waiting patiently to be bought and butchered, it had launched itself from its shallow tub outside a grocer’s stall and onto the hot sidewalk, where it wiggled and flopped. The crowd pushed past, ignoring this little scene. “Excuse me?” I called feebly, unable to get the shopkeeper’s attention, yet incapable of walking away. “Is this your fish?”
I remembered that moment when I met
Martin Roth
, a soft-spoken Austrian-born artist whose sculptures and installations cast animals and plants in starring roles. Roth’s work calls attention to the often shifting divisions between wild and domesticated, natural and cultivated, animals we love and animals we eat. In other words, if Roth had been on Grand Street that day, I bet he would have saved the fish.
Now based in New York, Roth grew up in the countryside and spent the better part of his childhood wandering through fields and forests. “As a child I was super interested in the idea of de-domestication,” he told me. “I always dreamed that one day pets would intermingle with wildlife.” He liked to imagine a colony of white rabbits going feral in the woods or a flock of parrots taking up residence at the bottom of an Austrian garden. As an artist, his work blurs the same boundary. “Animals end up in my work for a period of time and then leave it to live in a zoo or sanctuary, a space that’s something between wild and domestic,” Roth noted. 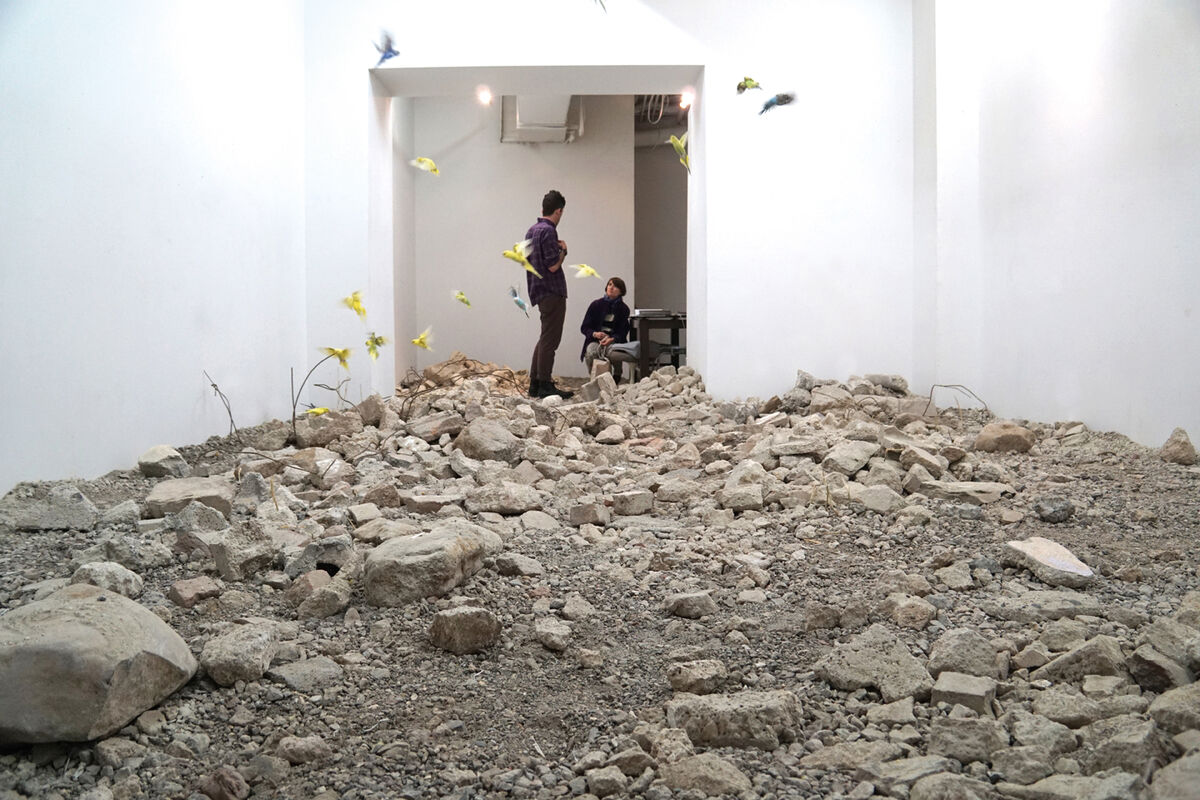 Martin Roth, In July 2015 I shipped debris from the Syrian border to use as bird litter, 2015. Courtesy of the artist.

The subjects in question are usually pets like parakeets, or laboratory stock like mice. A few narrowly escaped becoming dinner, like the bullfrogs he bought at a Chinatown market, then released into the lower level of the erstwhile Louis B. James Gallery, which he had flooded, transforming it into a shallow pond for the duration of the exhibition.
Intentionally or not, any work involving living things, from
Anicka Yi
’s high-tech ant farm to
Pierre Huyghe
’s painted dog, raises questions, both about what rights animals are accorded and the nature of our responsibilities for them. Recent controversies surrounding the use of animals in art (such as the Guggenheim’s decision to remove three animal works from the exhibition “Art and China After 1989: Theater of the World” last year) seem to intensify these questions without offering many satisfactory answers.
Roth, who once worked as an assistant in Huyghe’s studio, sees animals and plants as his collaborators rather than his medium. The activity of caring for them isn’t incidental, it’s the central premise of his work. While a graduate student at Hunter College, Roth bought seven ducklings from a game bird hatchery and raised them in his studio, which he had covered with leaves and outfitted with a small pond to simulate the ducks’ natural habitat. “The other students thought I was wasting my studio space and that the ducklings would prevent me from making work,” Roth said. “But for me, the work was caring for the ducklings.” 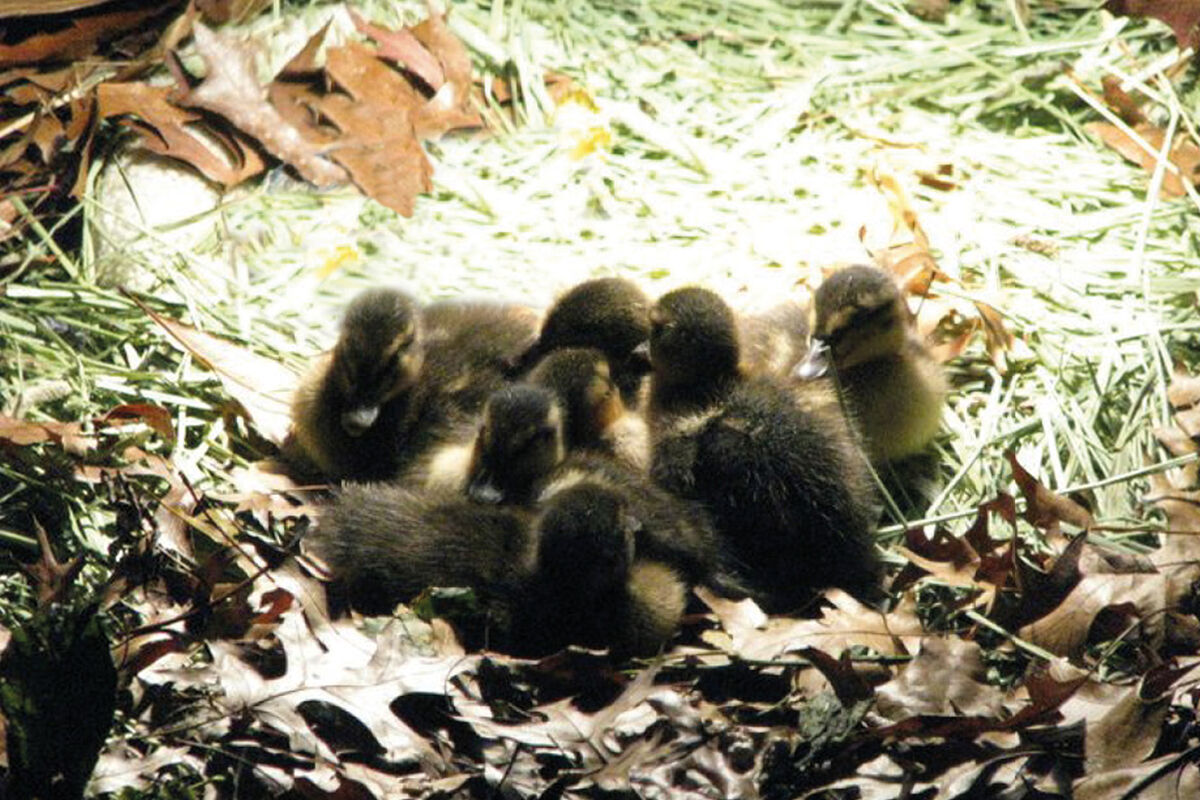 Martin Roth, In the fall of 2010 I raised 6 ducklings in my art studio. I later released the ducklings into the wild, 2010. Courtesy of the artist. 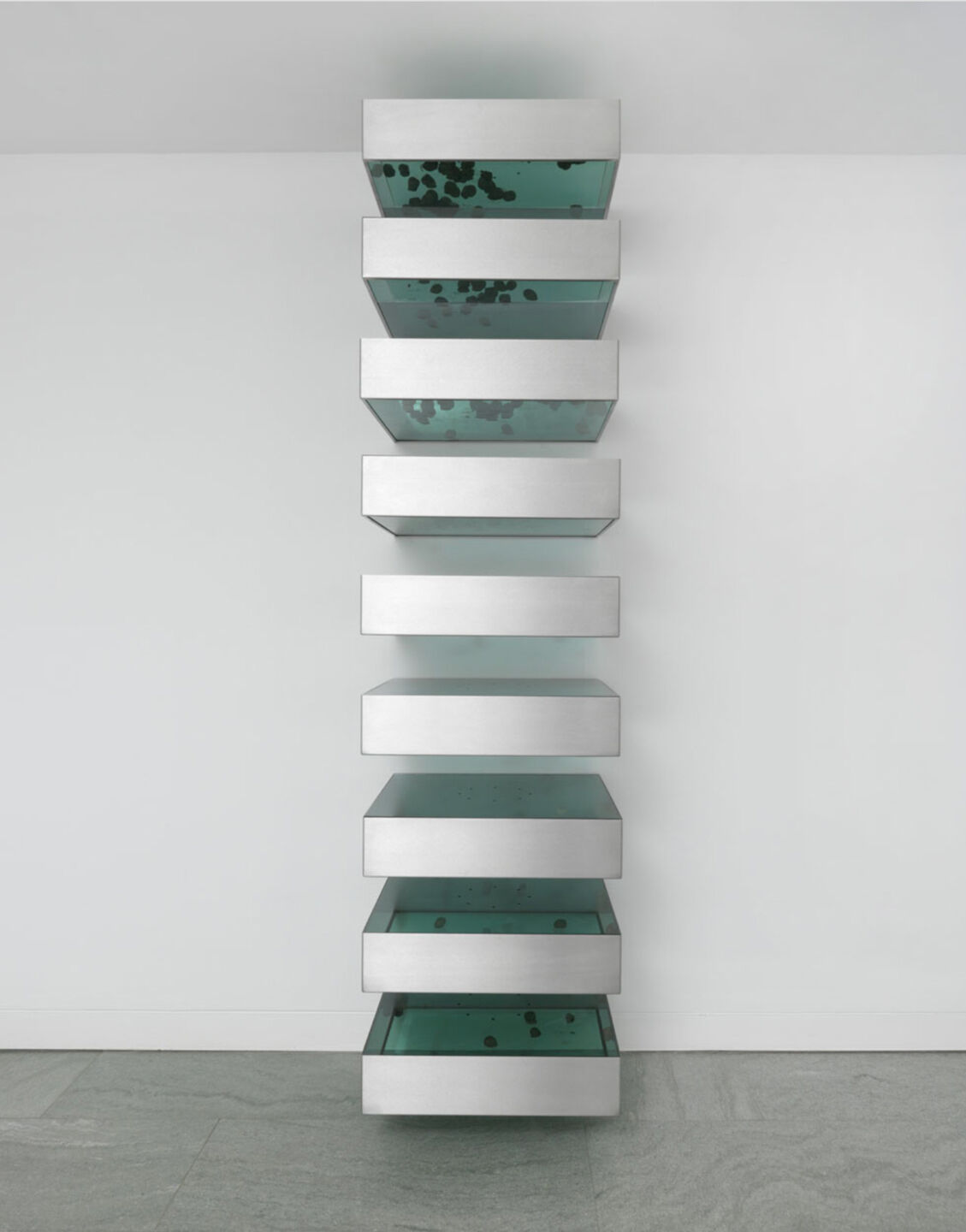 Advertisement
Roth’s attention was similarly occupied last week when the Berlin gallery Dittrich & Schlechtriem presented his Untitled (Donald Judd II) (2016) at The Armory Show. At a glance, the nearly nine-foot sculpture is identical to
Donald Judd
’s signature stacks, except, of course, for the snails who call the metal and plexiglass boxes home. Roth tended to the sculpture’s residents each morning at 8:30 a.m. before the fair opened, cleaning the habitat, feeding the snails, and misting the interior of the sculpture with bottled water. The written instructions for the care and feeding of the snails run to three pages. Acquiring a piece by Roth is more akin to adopting a kitten than buying a painting. It means making a promise to nurture and protect.
Like his earlier work, Roth’s current project has a simple declarative title, one that sounds like the opening lines of a short story: In November 2017 I collected a plant from the garden of a mass shooter.
Last November, a month after 58 people were killed at a music festival on the Las Vegas strip in the deadliest mass shooting in American history, Roth traveled to the shooter’s home in a sleepy retirement community in Mesquite, Nevada. What he found there was a neglected garden with a few haphazard plantings. It seems fitting somehow that Roth, the obsessive nurturer, would stumble upon such an unloved place.
The only remarkable things in the garden were a painting easel and a small desert holly plant growing in the gravel. Desert holly is famously tough; it can survive in sandy soil, desert heat, and extreme drought. “Native Americans believe that the healing plant we need will grow nearby,” Roth said. In the spirit of this credo, he began to research the plant’s properties, in pursuit of the idea that it could serve as protection from, or an antidote to, gun violence. 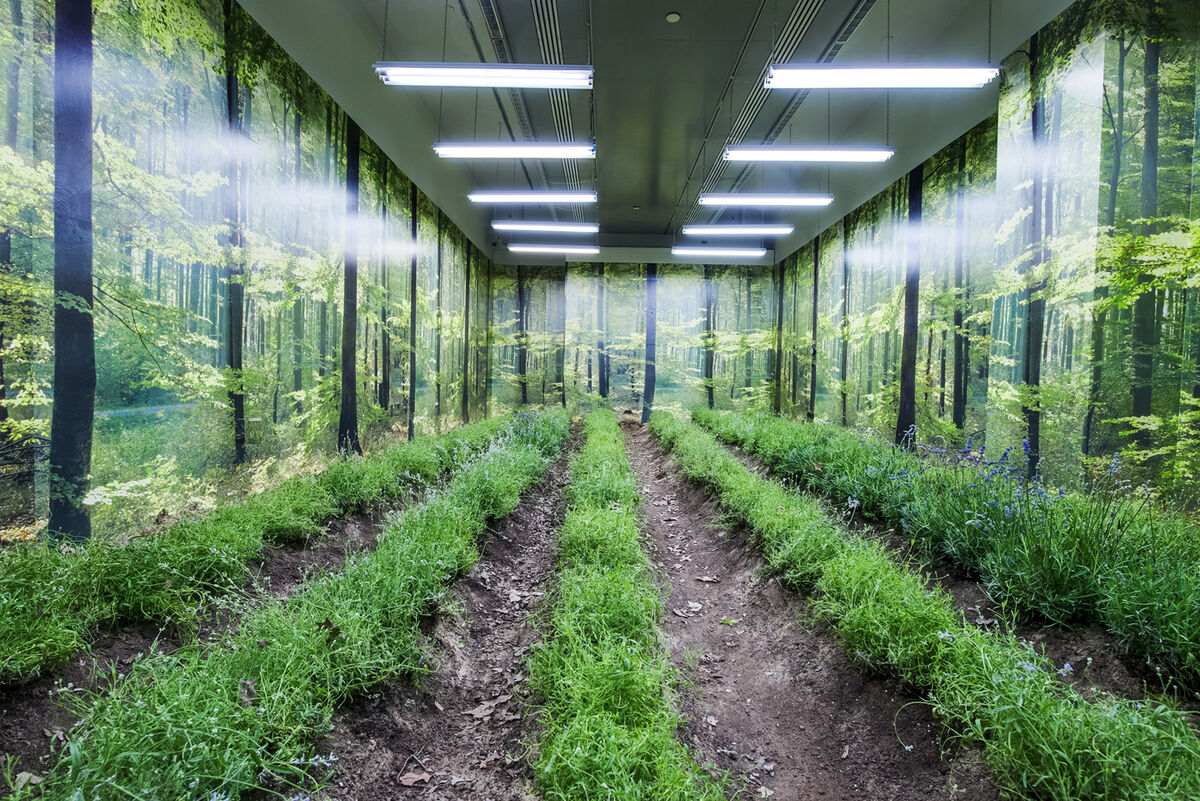 Martin Roth, In May 2017 I cultivated a piece of land in Midtown Manhattan nurtured by tweets, 2017. Courtesy of the artist.

Roth is aware that this proposition is ridiculous, but in his opinion, so are America’s gun laws. “By focusing on a plant as the solution to end gun violence, I wanted to point out that this absurd and sad situation is a symptom of U.S. politics,” he added. “I don’t try to give any solutions. I want to raise more questions.”
Now in the final days of a Kickstarter fundraising campaign, the project will culminate in a multi-floor installation at Yours Mine & Ours, opening on March 31st. Roth plans to construct a contemplative space with the desert holly as the centerpiece. Initially, he contacted a horticulturist, who told him he shouldn’t even bother bringing the plant to New York because there was no chance it would survive in this climate. But Roth was careful and persistent; he even monitored the plant remotely while he was on his honeymoon. Now, against all odds, it’s thriving.
In the few months since Roth began this project, the national conversation around gun control has shifted, with student activists taking the lead and challenging the seemingly inviolate power of the gun lobby. I asked if these events have changed Roth’s approach to this work. “The project is still the same, but the conversation around it is totally different,” he said.
Roth wants to invite students from the school near the gallery to the exhibition, walk them through the show, and discuss their thoughts, feelings, and reactions to gun violence. “Hopefully, there will also be time to sit with them and to invite them to draw the plant,” Roth added. “I want to speak to them more abstractly about the show. For example, do they believe that plants or animals have certain powers or ways to guide us?”
Ariela Gittlen
Related Stories