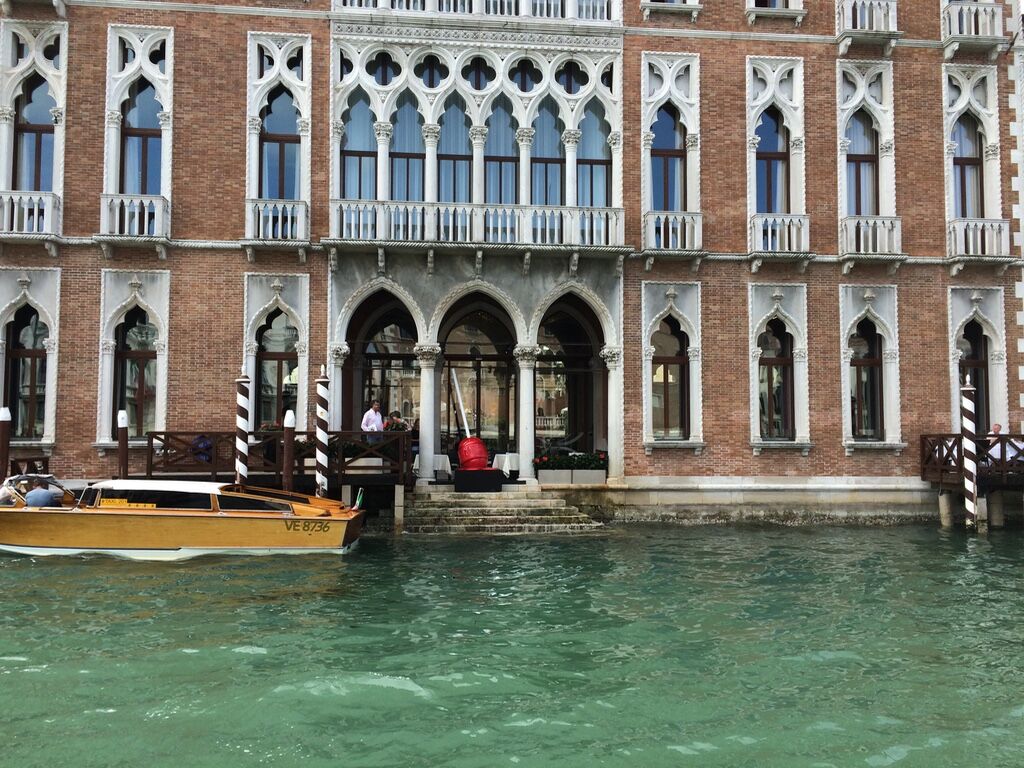 Artsy: How long have you been working with the Blow Pop? What is the significance of that form and how did you first arrive at it?
Desire Obtain Cherish: The idea for the series came to me after I had dinner with a friend years ago. She told me she was breaking up with her boyfriend. I asked what was wrong, and she said, “Nothing’s wrong, I’m just kind of bored. Onto the next!” Many people look a the sculptures of my Blow Pops and feel that I make art about candy. The truth is, I make art about us. If you look carefully, it’s a sculpture of a perfect candy discarded, in fact, barely even tasted. Almost brand new, just melting in the sunlight. Simply discarded, as if our attention span was that of a child’s. 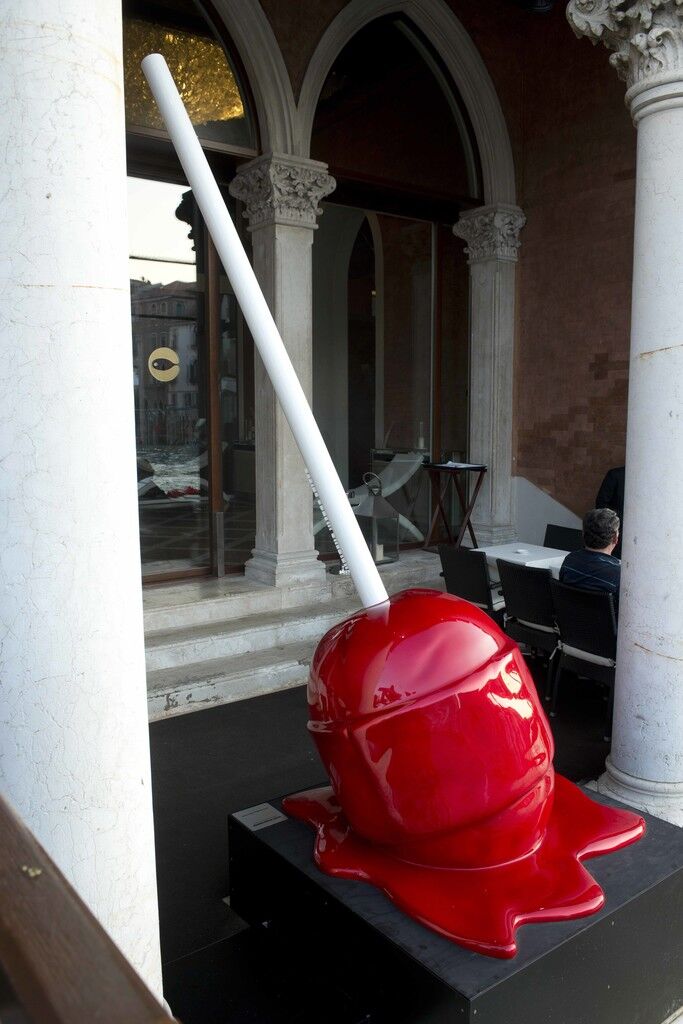 Desire Obtain Cherish
Cherry Meltdown, 2015
UNIX Gallery
Artsy: Can you talk us through the process and production behind a work like this one?
D.O.C.: For my first version of Cherry Meltdown, the process started over a year and a half ago with a collector asking for six large Meltdowns (Blow Pops) for the garden of his house in Spain. That project is still ongoing. For this version of Cherry Meltdown [in Venice], the process began with a 3D scan of one of my UV cast resin sculptures to ensure an exact mold would be made. Next, I received samples of the finished surface. I wanted the stainless steel to have almost a plastic appearance, withstanding the elements of weather and sunlight.
I flew to New York a number of times to oversee the the first incarnation of the nine-foot sculpture: the casting of parts and the assembly and welding of the stainless steel. We needed to make sure that the drainage of rainwater would run off the base of the puddle of the Meltdown and not pool at the bottom of the sculpture: things you don’t usually need to consider when making smaller indoor sculptures. Next was the engineering of the six-foot pole. After six months of work, the final piece looks and feels like an exact enlargement of my original sculpture. 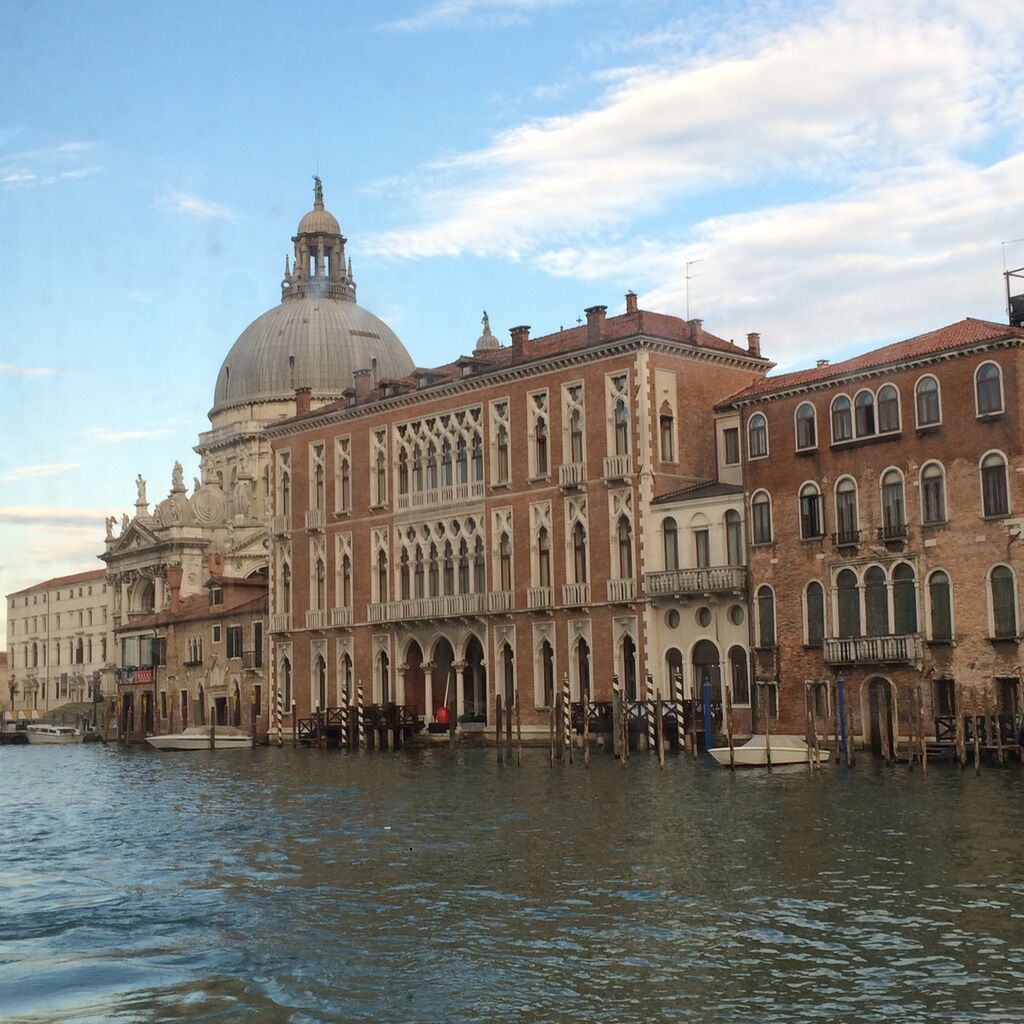 Advertisement
Artsy: Why did you decide to show this piece in Venice? Where is it located in Venice and how did its exhibition come about?
D.O.C.: When I started the project, there was discussion with my gallery UNIX that it would debut in a public space in New York. Then Daniela Mercuri, the gallery’s co-owner, decided to reach out to Venice—and with the help of Bugno Gallery, we were able to secure an amazing location during the Biennale. It is at the Centurion Palace right near the Peggy Guggenheim Collection and across from Piazza San Marco.
It took a team of people to create a custom pedestal to rest on the steps and boats specialized with large cranes to place the 600-pound red Blow Pop on its perch at the edge of the canal. Bugno Gallery also met with the Murano glass master Pino Signoretto and began crafting custom Murano glass Meltdowns that will only be available through their gallery during the Biennale. 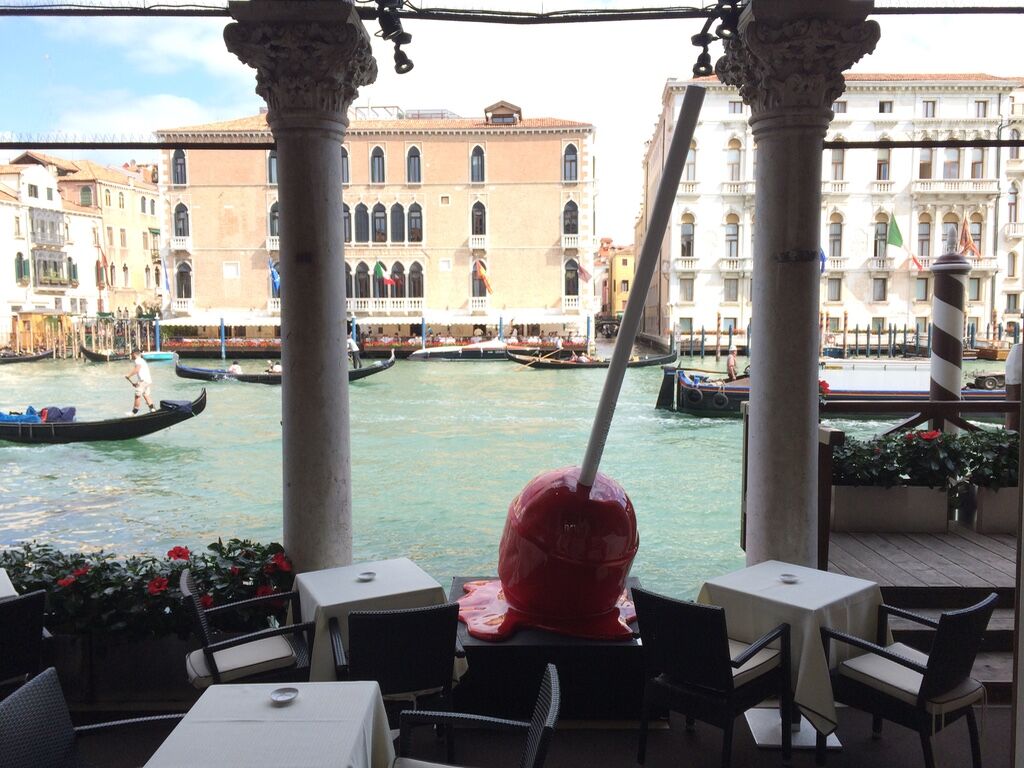 Artsy: As much of the art world and thousands of tourists visit Venice over the next few months, how do you imagine they'll feel upon seeing your work?
I believe art should be inclusive to the largest audience it can get. That is why public art is so attractive to me. Making others question what we see and what it means, perhaps, but more importantly to include women, men, teenagers, families, children, and different cultures to marvel at its presence. If it brings about smiles from the majority of them, I feel that my art has come to life.
—Bridget Gleeson
Cherry Meltdown is on view in Venice through the end of the summer.
Follow UNIX Gallery on Artsy.
Related Stories