When Pranks Become Works of Art 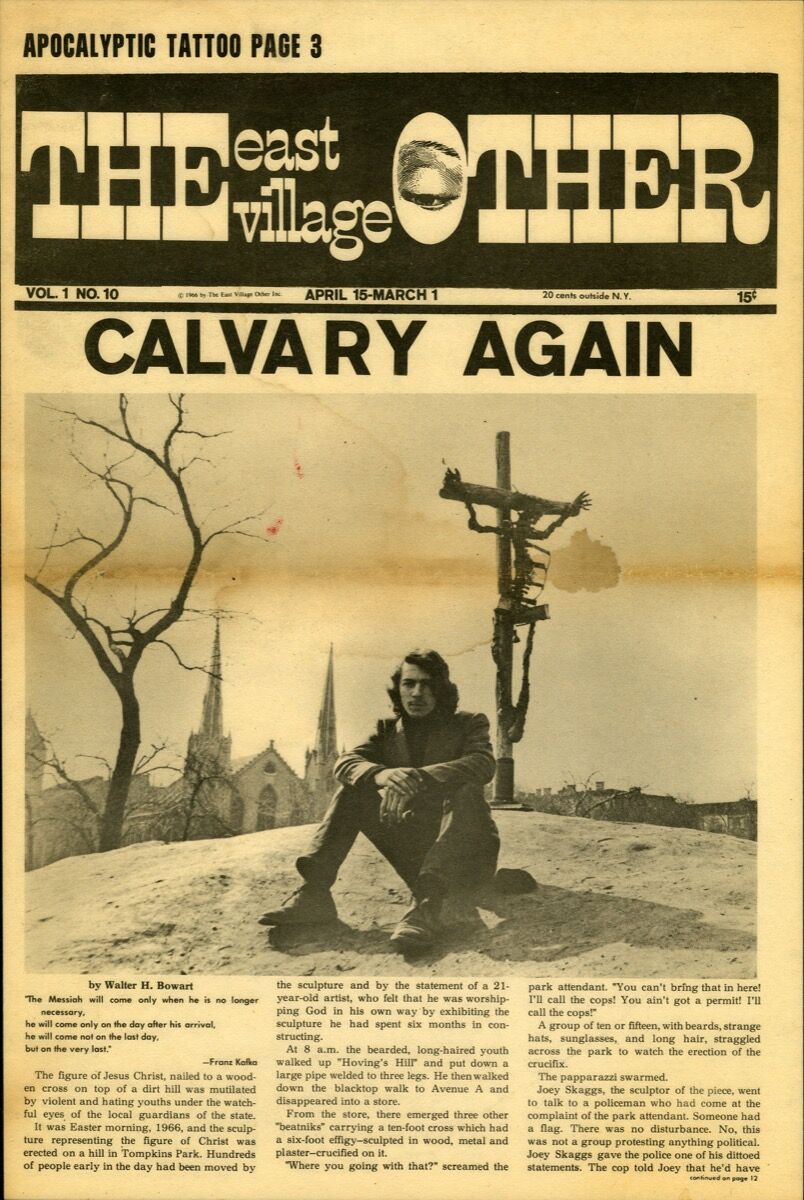 Joey Skaggs on the front page of the East Village Other, 1966. Courtesy of Relight Films. 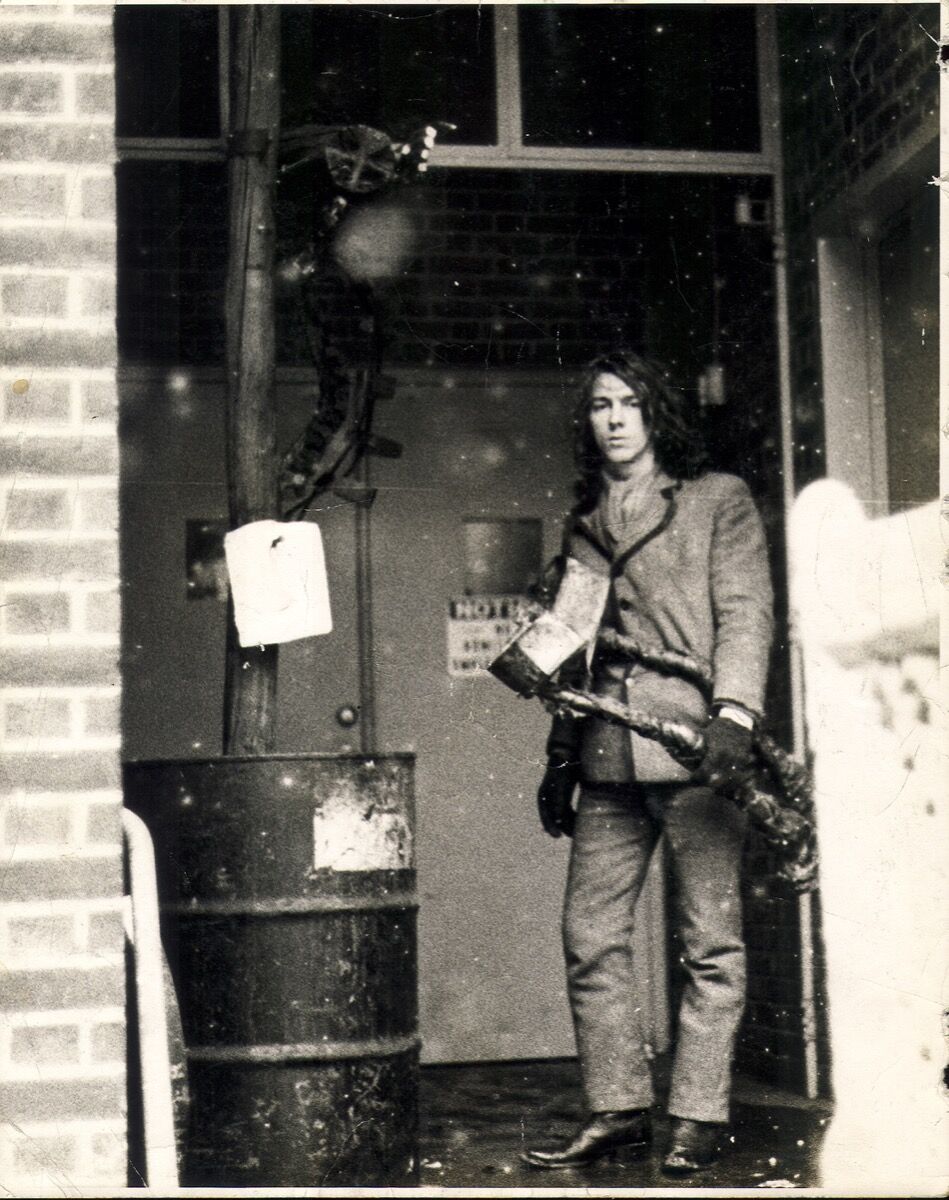 Fifty years ago, on a beautiful Sunday morning—September 22, 1968—I stood welcoming my guests onto a rented Greyhound sightseeing bus on the corner of St. Mark’s and 2nd Avenue in New York City. While the rock band the Group Image loaded their equipment into the luggage area on the side of the bus, writer Paul Krasner quipped hilariously about our upcoming odyssey. The 60-seat Greyhound bus was soon to be completely filled with long-haired, beaded, camera-toting hippies—some friends, some total strangers. The plan was to visit the borough of Queens in an ironic reversal, mocking the tour buses that relentlessly came to Greenwich Village and the Lower East Side to gawk at the hippies. It was my cultural exchange tour. We were excited. We felt like pirates on a galleon. After Howard Smith wrote up my plan in his weekly Village Voice column, artist
Yayoi Kusama
asked if she could come paint polka dots on a troupe of naked dancers when we stopped at a local head shop on Queens Boulevard, where the Group Image would play.
I was young, but already known for my provocative art. In 1966, on Easter Sunday, I had dragged a decayed skeleton of Jesus Christ on a 10-foot-tall cross to Tompkins Square Park on the Lower East Side, to protest man’s inhumanity to man. I took the sculpture out again on Easter in 1967, this time to a Central Park “Be In.” This notoriety may have led to a visit by a neatly dressed, middle-aged black man who rang the buzzer of my loft on East 2nd Street, between Bowery and Second Avenue. He said he had come to buy a ticket for his daughter to ride on my bus to Queens. It seemed highly unlikely, so I told him I wasn’t charging for the sightseeing tour. It was completely free. Still of Joey Skaggs’ 1968 Hippie Bus Tour to Queens  from Art of the Prank, 2017. Courtesy of Relight Films.

He reached in his pocket, pulled out a $5 bill, and insisted that I take it. I told him I didn’t want it, but he literally forced it on me. He then pulled out a badge and said I was busted for illegally operating a tour guide business without a license. I thought he had to be kidding, but he wasn’t. I said I was going to do it anyway, and that this would not go over too well with my friends in the media. He said that since I was only doing it once, there was a possible way out of this: I could go downtown and take a test to become a licensed tour guide.
With the information he gave me, I went to take the test. Acting like a real smart-ass—mostly because I didn’t know all of the answers—I made up silly responses. Needless to say, I failed the test. I told the authorities I was going ahead with my plan anyway. They suggested I hire a licensed tour guide. And so, also standing outside the bus on this Sunday morning in September was Bob Lake, a chubby, bald, licensed tour guide.
I was born in Brooklyn and grew up in Queens. Against my father’s wishes, my mother let me attend the High School of Art and Design in Manhattan, so the city had been my home and salvation for years. My father and I had never seen eye-to-eye, and he threw me out of the house as soon as he could. There was probably an element of revenge in my decision to revisit Queens. Participants waiting outside the Greyhound Hippie Bus Tour, 1968. Still from Art of the Prank, 2017. Courtesy of Relight Films.

Advertisement
A lot of the inspiration for my art stemmed from a rejection of the values imposed on me as a kid: religious creed that made no sense to me, blind support for the war in Vietnam, middle-class bourgeois superiority, social injustice, racism and intolerance. I was an angry young artist hellbent on doing whatever I wanted, and the world became my stage. At the time, the Lower East Side was a cultural epicenter, comprising a real nucleus of creative energy. It was affordable, it was hip, it was dangerous, and it was home—home to all the refugees who had escaped from not only other countries, but also the outer boroughs of New York and New Jersey.
My friends were visual artists, writers, musicians, actors, and activists. Because of our lifestyles, we made the place a cool attraction for the “bridge-and-tunnel” tourists who drove through and pointed their cameras through the smoky windows of their Greyhound buses. We were the freak show, the animals they could mock. Fed up with this, I decided to take the freak show back to suburbia to ridicule the squares we had left behind: “Oh, look! They’re mowing their lawns and washing their cars!” The natives freaked when they saw us. One lady actually shrieked: “We’re being invaded!” I had no idea about the interest this satirical gesture would ignite. Carloads of journalists trailed the bus everywhere we went. Some were even on the bus.
We stopped on Queens Boulevard, where I bought everyone White Castle hamburgers, which, at the time, were $0.14 each (or five for a quarter, if you had the coupon from the Sunday paper). Our tour guide Bob Lake, an encyclopedia of obscure information, kept us entertained as we gleefully rolled on through Queens to Howard Johnson’s, where I bought everyone ice cream. We then arrived at a headshop in Jackson Heights, where the Group Image band played and Kusama painted polka dots on gyrating naked dancers. Meanwhile, we took pictures of the residents while the media took pictures of us. Eventually, we got bored and headed back to Manhattan. Returning to the Village, we ran into another bus of actual tourists. Pulling alongside it, we all ran to the right side of the bus and whooped and yelled at the tourists. My satirical commentary underscored a huge cultural divide caused by intolerance that we still see throughout our society today.
The next day, much to my father’s embarrassment, I showed up on the front page of the Daily News. The Bus Tour to Queens was also featured in the New York Times and on the Associated Press wire service. Our adventures were broadcast on The Today Show. After so much publicity, the Greyhound company approached me to see if I would consider doing more tours to other boroughs.
1968 was a seminal year for cultural upheaval. Lyndon B. Johnson was president, and the country was embroiled in the ever-more unpopular Vietnam War. “National Turn in Your Draft Card Day” inspired people to burn their draft cards, and there were war protests in the streets. On April 4th, Reverend Martin Luther King Jr. was assassinated. Soon after, Robert Kennedy was shot in Los Angeles, and died on June 6th.
The federal minimum wage was $1.60 an hour, and, nationally, the average monthly rent was $130. The average cost of gas was $0.34, and a movie ticket cost $1.50. Now, 50 years later, young artists can’t survive the same way we could back then. The creative nucleus that drew so much attention has become decentralized. The Lower East Side, Greenwich Village, SoHo, Tribeca, Little Italy, and Chinatown—then hotbeds of creative and artistic energy—have all become too expensive. Gentrification and rapidly rising costs of living have caused an exodus to the outer boroughs—Brooklyn, Queens, the Bronx—and even to New Jersey. People are being forced to move to the very same boroughs their grandparents ran away from. There’s still a commercial element to the art scene in Manhattan, but artists can’t afford to live there. Sadly, the outer boroughs are getting so expensive that maybe the next logical step for artists is to stay on the bus!
Joey Skaggs is a painter, sculptor, and social activist. He’s the subject of a recent documentary, Art of the Prank, directed by Andrea Marini.
Related Stories