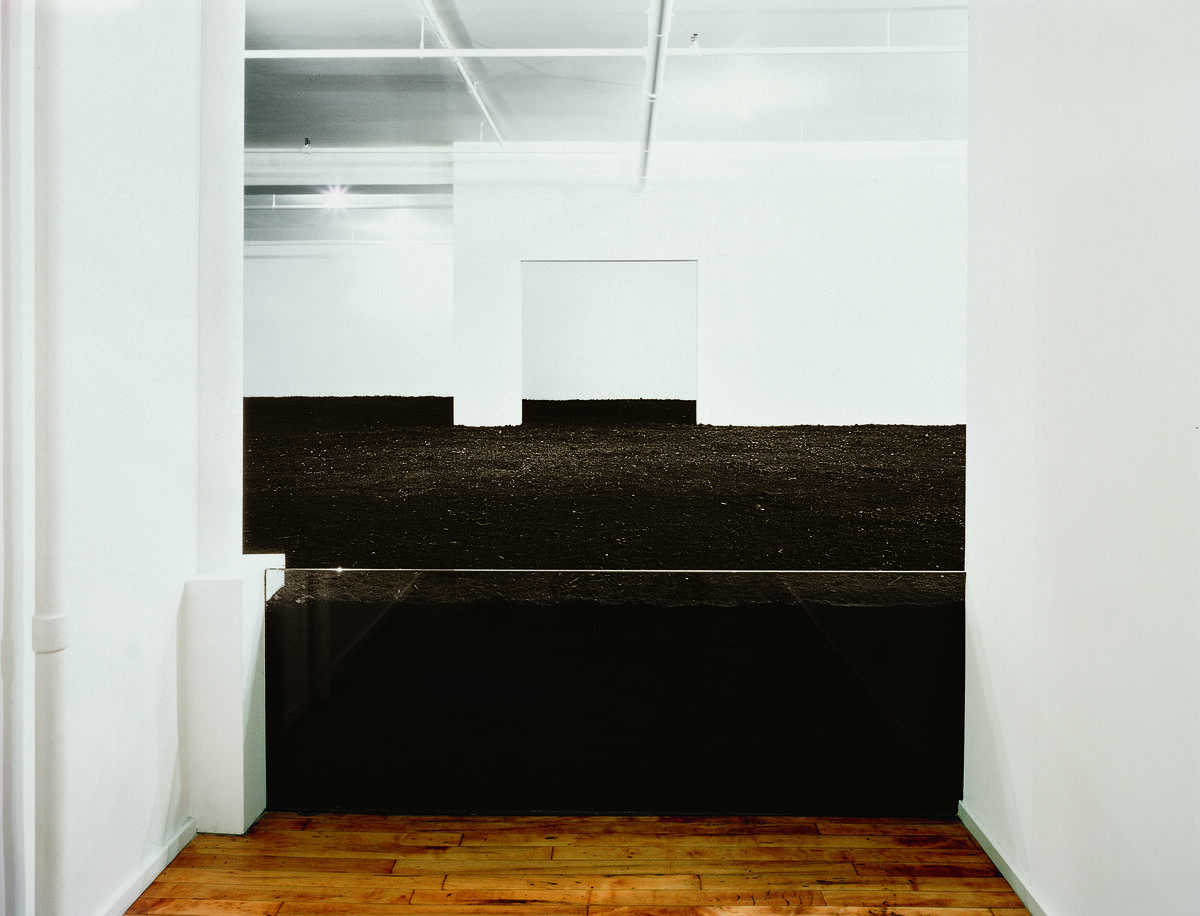 Your perception of an artwork often says more about you than about the piece itself. Such was certainly the case when I visited
Walter De Maria
’s New York Earth Room (1977) in SoHo on a recent Friday evening. The work simply involves 250 cubic yards of pungent, fertile dirt on the floor, located on the second floor of a building on Wooster Street. Gazing out at the 3,600-square-foot installation, visitors might be enticed to trample the earth—but a two-foot-tall glass partition prevents them from doing so. Nearby, you’ll find a desk, and behind that, a man named Bill Dilworth (an artist himself) who has answered visitors’ questions since 1989. He spends his days reading, tallying guest numbers in calligraphic scrawl atop a white sheet of paper, and exuding a quiet mystique.
I visited the Earth Room with my friend, a social worker who lives in a one-bedroom apartment on the Upper East Side. He had the idea that the work was really about Dilworth, not the dirt, and he engaged the attendant in brief conversation. It was a significantly more humane response than my own. Perhaps I’m a little bitter, since my own budget means I’m living with a couple of roommates in Crown Heights, Brooklyn. “I think the work is about real estate,” I said, irked that such a coveted space—ample natural light, a short walk from the Artsy offices—was literally lying fallow in an already overcrowded, overpriced city. (To be fair, I later learned that mushrooms grow in the soil.) According to Business Insider, the average rental cost of nearby SoHo apartments is $5,287 per month. The Dia Art Foundation, which currently owns the space, got in at a good time—a 2016 report found that the city’s overall rental prices have increased by 70 percent since 1980. Dilworth recently told me that the Earth Room itself has become a “selling point” for the building. (The first and fourth floors are commercial—Overlook Press used to be a neighbor—and the rest is a residential co-op.)
No matter what your perception of the Earth Room, it remains a significant achievement in the history of
Conceptual art
. The creator, Walter De Maria, may be best known as a
land artist
. His most famous piece, The Lightning Field (1977), consists of 400 metal poles placed in the New Mexico desert. Most land artists intervene with the natural world, shaping environmental structures with man-made tools. To create Spiral Jetty (1970),
Robert Smithson
deployed dump trucks and a tractor to move tons of rock into a swirling formation on the Great Salt Lake.
Michael Heizer
and his crew blasted deep cuts into Nevada’s Mormon Mesa for his 1969–70 desert piece Double Negative. De Maria took an opposite approach with Earth Room. Here, nature invades a white-washed apartment—that symbol of suave, urban living.
De Maria is a storied figure from New York’s experimental art and music scenes of the 1960s and ’70s. He played drums with the Primitives, the band that would go on to become the Velvet Underground. Curator Kynaston McShine included De Maria’s 1965 sculpture Cage (which resembles a thin, vertically oriented enclosure) in “Primary Structures: Younger American and British Sculptors,” the 1966 exhibition at The Jewish Museum that established a roster of seminal
Minimalist
artists. De Maria named the work for avant garde composer John Cage, whose most famous piece, 4’33’’ (1952), consists of 4 minutes and 33 seconds of silence. Given De Maria’s interest in sound, it’s no surprise that Earth Room itself has a sonic dimension. Rising from the busy, tourist-laden streets below, the visitor encounters an unusual stillness in the loft. With all that dirt, the acoustics are particularly good.
De Maria tested out his concept in Germany before bringing it stateside. “Let’s face it. How much time does a person spend with a piece of sculpture?” he said in a 1972 interview. “By starting to work with land sculpture in 1968 I was able to make things of scale completely unknown to this time, and able to occupy people with a single work for periods of up to an entire day.” In 1968 and 1974, he set up Earth Room in Munich and Darmstadt, respectively. These versions no longer exist, except in nostalgia-inducing, archival black-and-white photographs. 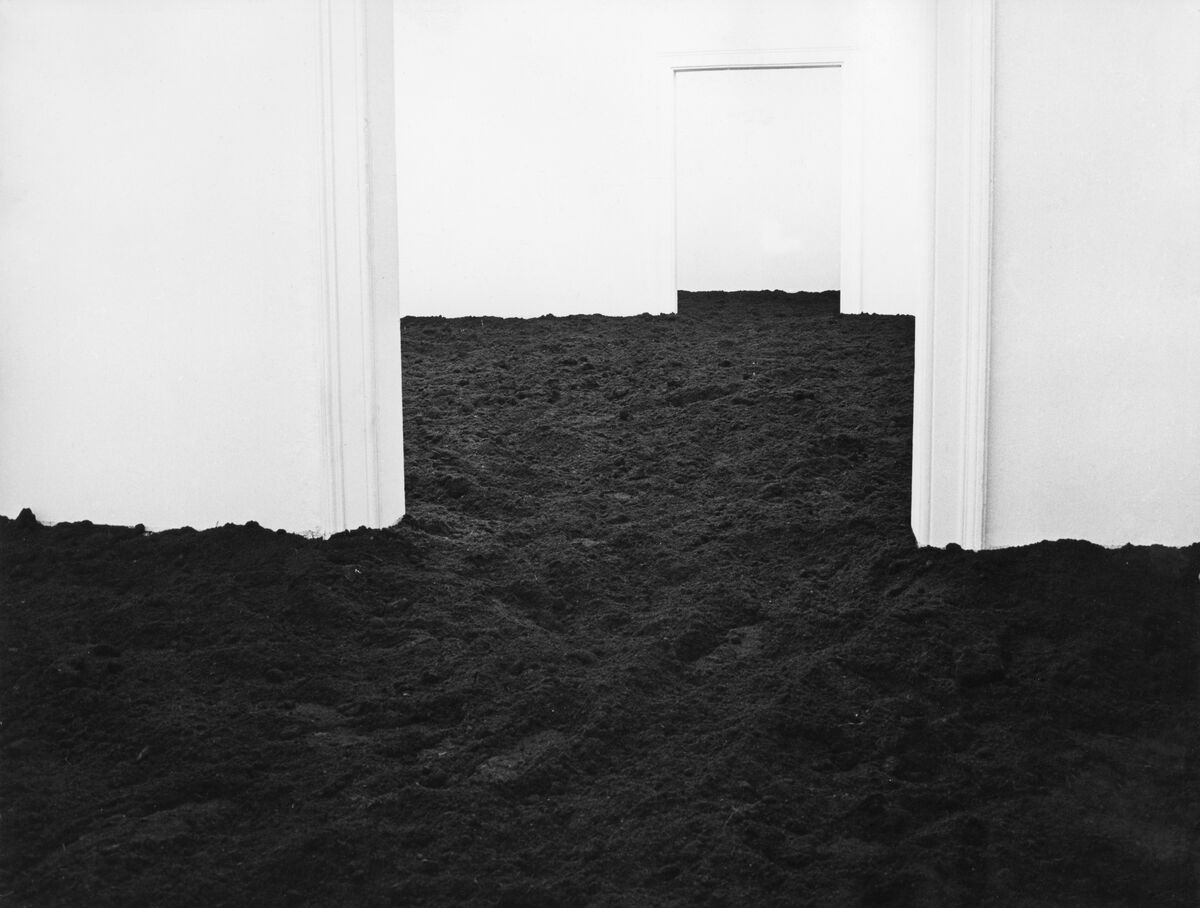 In one particularly compelling picture from the Munich iteration, a thin, hiply coiffed De Maria—long sideburns, dark turtleneck and jeans, white sneakers—stands on a wrapped bale of dirt in a stark white room of Galerie Heiner Friedrich as light streams across the floor. Two men stand in the background, one in dark clothing and one in a crisp white button-down with a tie. The contrast is apt: The work often elicits thoughts about light, darkness, and time (unless, like me, you’re too caught up in real-estate envy to notice). It changes shade as the sun moves across the sky. In New York, the room’s white paint and the dirt itself look warmer or cooler depending on the hour.
Though the Munich presentation was temporary, De Maria’s gallerist Friedrich liked to think of the work as everlasting. After he commissioned a version in New York, at his SoHo gallery/apartment space in 1977, the piece stayed put. Friedrich moved out, but De Maria’s dirt remained. Dia Art Foundation (which counts Friedrich as a founding member) opened the work to the public in 1980.
Dilworth finds Earth Room’s appearance, and its visitors, so variant that he continues to find new pleasures in his job, year after year. Recently, I made a second visit to the Earth Room to speak to him. When I arrived, he was behind his desk, reading a biography by his brother, Thomas Dilworth, of midcentury British poet and painter
David Jones
.
“People look at the Earth Room and they think nothing’s growing,” Dilworth told me. “But what’s increasingly evident is that time is growing there. The fact that it doesn’t change means that time is constantly accumulating.” He waters and rakes the piece about once per week, alternating directions to keep the earth level. It’s become, it sounds, akin to a mindfulness exercise. Dilworth told me he used to yell at viewers who photographed the work (De Maria specified that this wasn’t allowed, though he couldn’t have predicted Instagram’s current ubiquity before he died in 2013). He ultimately stopped because that harshed the mellow of the whole art-viewing experience in a way De Maria never would have wanted. 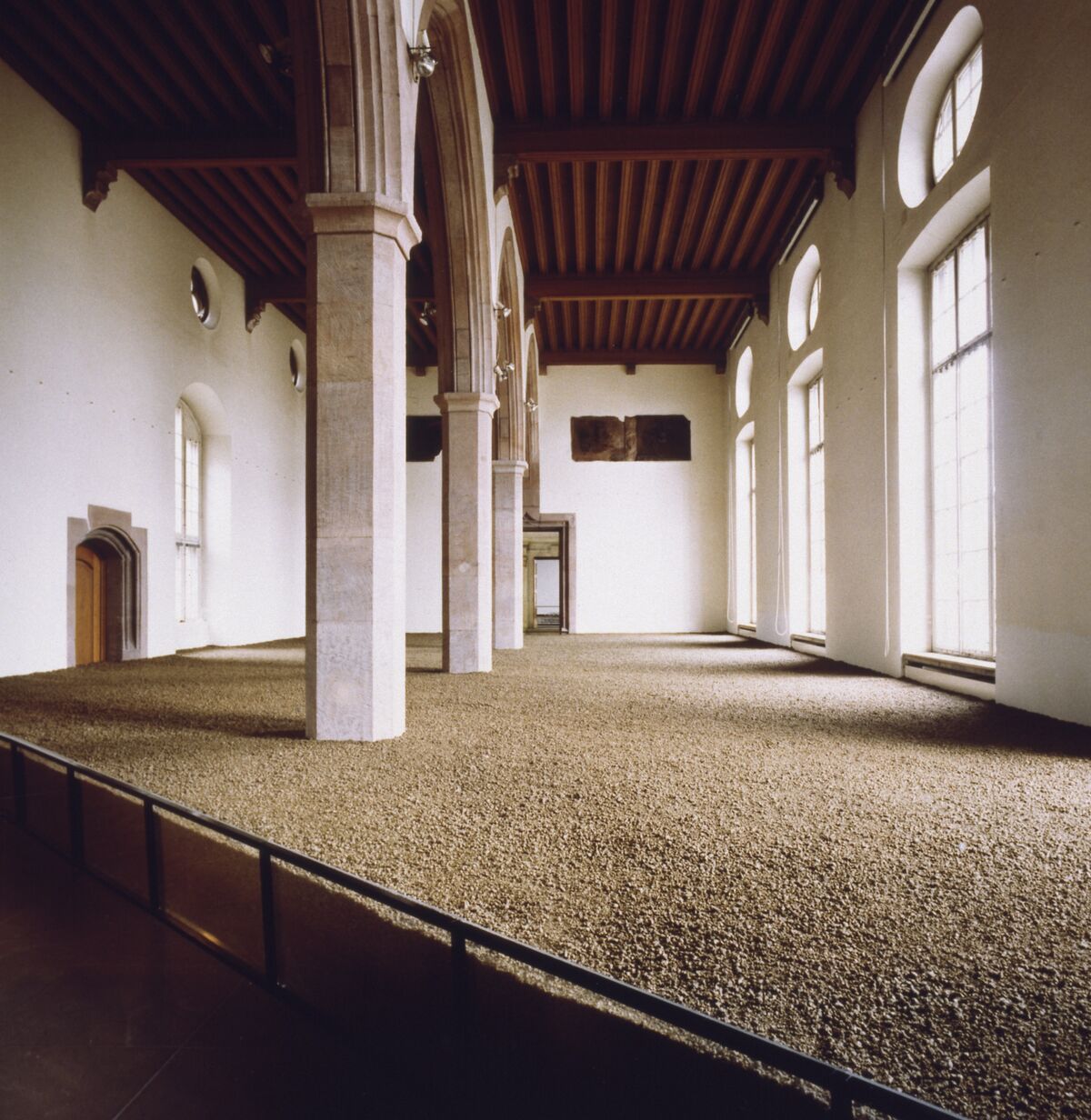 Advertisement
Dilworth admitted that he’s confronted by the same, repetitive questions: How much does the Earth Room weigh? Do things grow? Does the floor have to be reinforced? (The piece weighs 280,000 pounds. No, the floor doesn’t have to be reinforced—the distributed heft is actually significantly less than that of the industrial machines generally accommodated by such spaces, and dirt has proven less accident-prone than people.) Dilworth compares his role to that of a singer or comedian—someone who “sings the same songs or tells the same jokes. It’s always to a different audience, and that’s what keeps it fresh.”
I asked Dilworth where the soil (which has remained the same since the work’s inception) originally came from. He’s not sure, and the correct answer is lost to history. He heard one story about De Maria venturing to Pennsylvania, and another that placed him in upstate New York. “I prefer not knowing,” Dilworth said. “It makes it more genuine and available to everyone.”
Indeed, the magic of Earth Room lies in the generosity of its interpretative possibilities, and in the unwillingness of Dilworth (or the late De Maria) to offer simplistic, reductive answers. My social-worker friend and I could both be right about the meaning of the artwork. While Dilworth is a vital part of the artwork’s upkeep, he doesn’t go so far as to imagine that Earth Room is about him. But he’s predictably sagacious about his role. He noted that he’s either “apart” from or “a part” of the Earth Room. Same letters. He’d let me figure that one out myself.
Alina Cohen
Related Stories