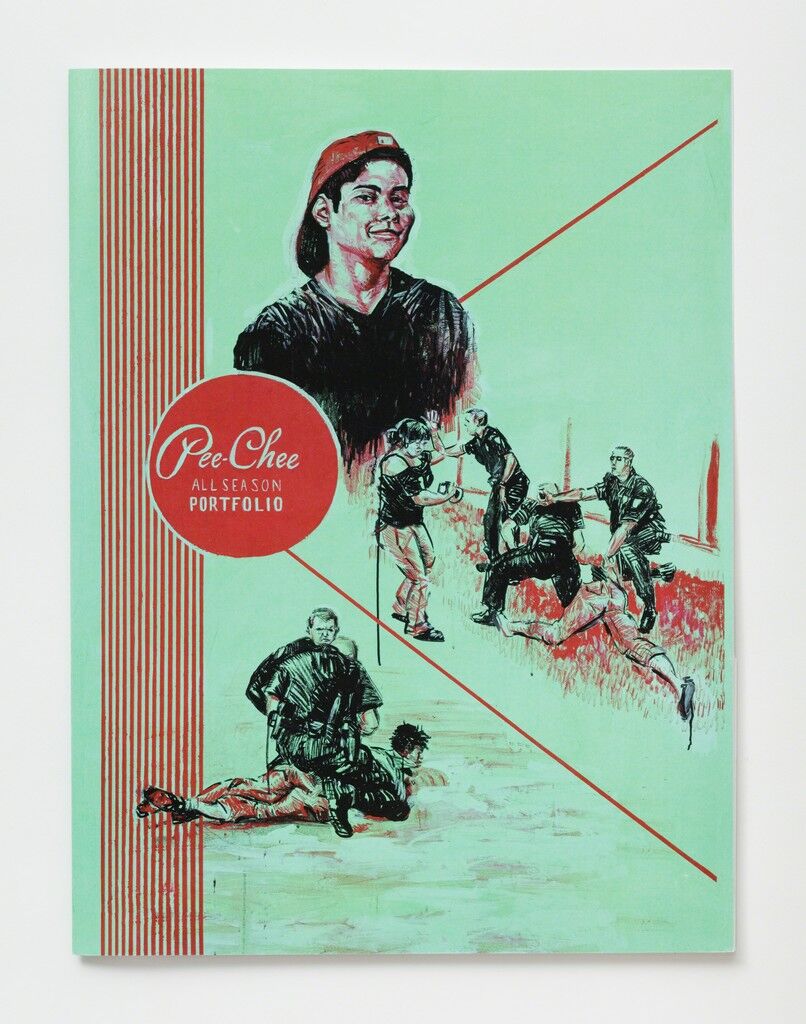 Portrait of Patrick Martinez by Chris Gonzales. Courtesy of the artist.

The Los Angeles–based artist
Patrick Martinez
speaks truth to power. He leans into overtly political subjects in his art. In some of his best-known works, such as his “Pee Chee” paintings, Martinez memorializes people of color who were victims of police brutality. These multimedia pieces are filled with striking juxtapositions of classic Americana with deft depictions of athletes and students, and violent scenes of policemen pinning people to the ground.
“When I was in college, I wanted to talk about youth and authority because the cops were always at our school,” Martinez said of the origins of the series in a recent interview. “I remembered the Pee Chee folders that we used to carry in middle school and high school. I was combining these idealized American scenes of high school with scenes of police brutality and police misconduct.” 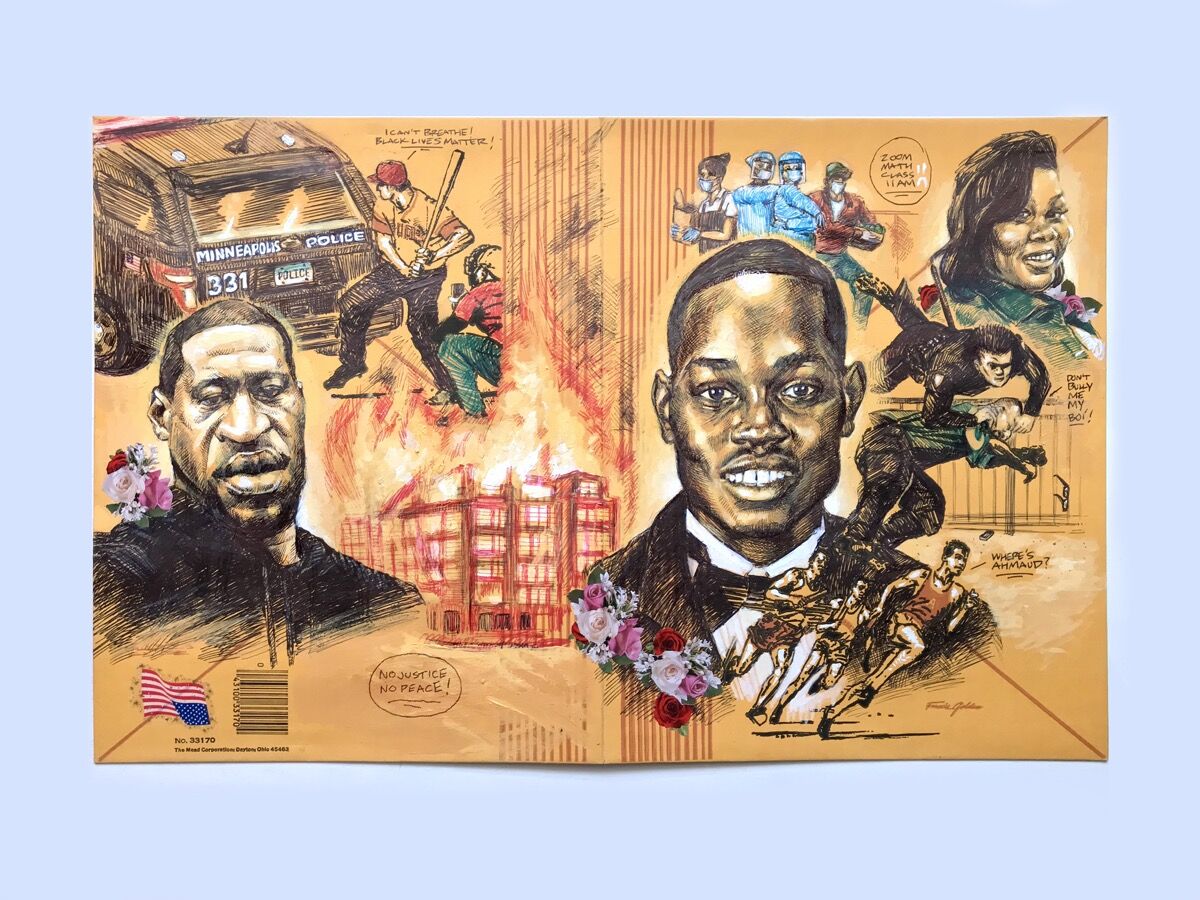 Patrick Martinez, Racism Doesn’t Rest During A Pandemic Pee Chee (No Justice No Peace), 2020. Courtesy of the artist and Charles James Gallery.

Police brutality has become impossible to shy away from in recent weeks as protests have erupted across the world in response to the death of George Floyd, the Minnesota man who died in police custody on May 25th, after an officer kneeled on his neck for over eight minutes. One of Martinez’s latest pieces, Racism Doesn’t Rest During A Pandemic Pee Chee (No Justice No Peace) (2020), shows Floyd as well as Ahmaud Arbery and Breonna Taylor. The portraits of Floyd, Taylor, and Arbery are large and captivating; Martinez carefully rendered their features, to properly pay homage to the victims. Their faces appear next to harrowing scenes of a burning building and a white police officer tackling a young black man. Martinez plans on making prints of the piece, then giving them to community members and people who are protesting.
He started making the piece after news spread of the killing of Arbery, then kept adding to it in the weeks that followed. “I wanted to include all of these happenings and memorialize them at the same time,” Martinez said. 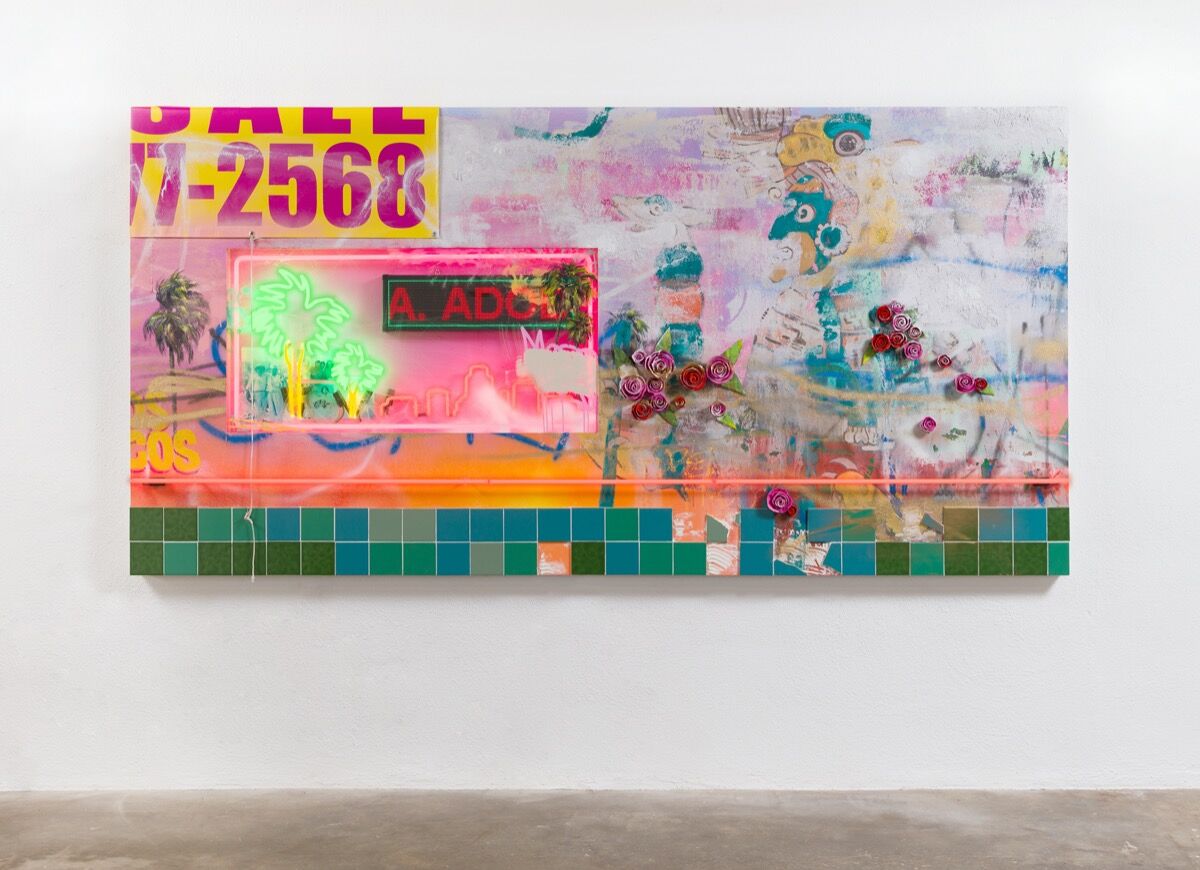 Advertisement
“When I’m making the work, I don’t just want to make work that decorates people’s homes,” he continued, noting that he doesn’t want to just be part of trends in contemporary art. “I do want to bring beauty to things, but I want to be useful, and I want to be expressive, and this is just the way I propose it. I want to pay homage and memorialize people,” he added. “I know that these things are important because these people are not going to be memorialized by America. They’re not going to build bronze statues of them. They’re not going to paint portraits of them and hang them up.”
Martinez’s desire to represent these issues also stems from his upbringing. His ethnic background is diverse: He is of Filipino, Mexican, and Native American descent. He was born and raised in the San Gabriel Valley, east of Los Angeles, and he decided to stay there as an adult. Many of his experiences growing up in the L.A. suburb still influence his art.
“The cops would arrest my brother’s friends during the summer. Or not even arrest them, they would harass them, put them in the backseat of a car for 15 or 20 minutes, and turn on the heater,” Martinez recalled of his teen years. “I would hear about stuff like this and see cops harassing my friends, harassing me.…We weren’t terrible kids.” 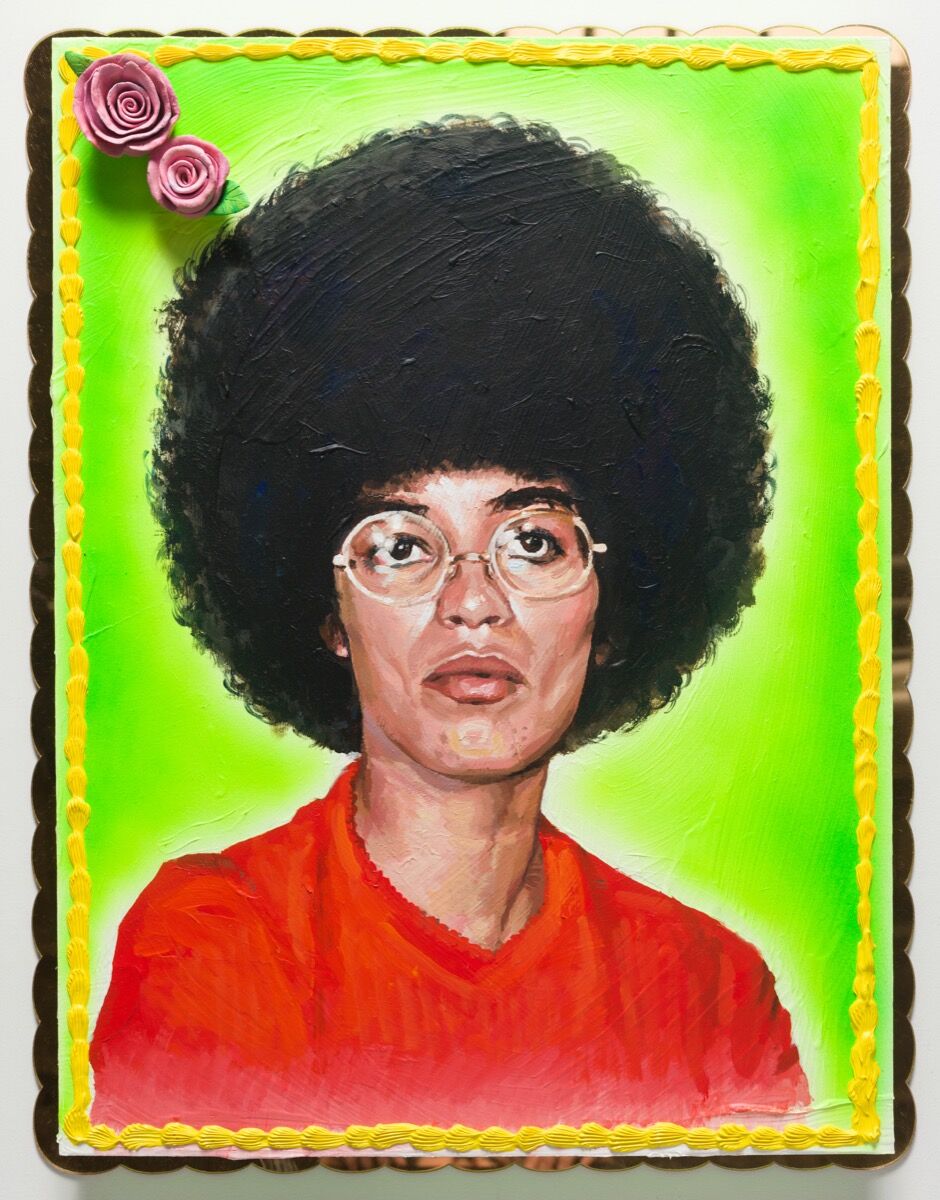 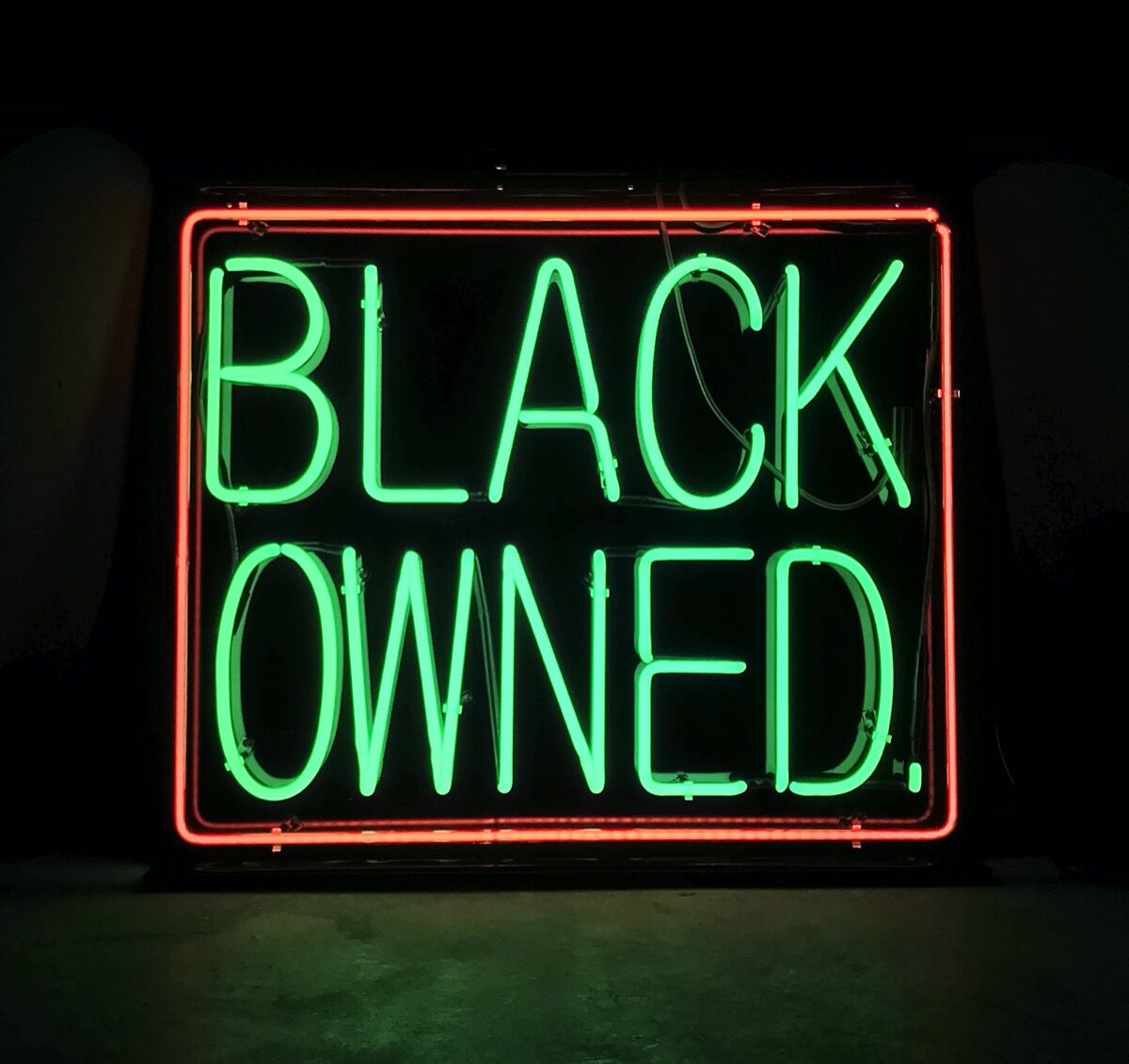 Much of Martinez’s other works harken back to his childhood and paint a complicated picture about race and class. For example, in his first solo exhibition in New York, “That Which We Do Not See” at Fort Gansevoort in 2019, he presented a series of colorful portraits of freedom fighters that sit atop sculptures of sheet cakes. The faux confections nod to the birthday parties in his community growing up. The faces of prominent activists and intellectuals such as James Baldwin, Angela Davis, and Malcolm X appear on the cakes, against vivid backdrops. By rendering their portraits on these familiar, celebratory surfaces, he honors these activists in his own way.
In another series made up of neons, Martinez reimagined the familiar signs from mom-and-pop shops to comment on racial inequality and class, illuminating messages like “Black owned,” “Fight the power,” and “No struggle no progress.” One piece, titled Equality (2016), shows the phrase “All men are created equal,” with the word “equal” distinguished. More recently, he’s been making large mixed-media paintings, several of which appeared at The Armory Show in March with Charlie James Gallery. The pieces combine a variety of media—such as neon, ceramic tile, and spray paint—blending aspects of “high art” with common objects.
“I do feel like I’m all over the place in terms of lighting and executions, but I feel like they are intersecting in a way,” Martinez said. “A lot of people say, ‘You have a lot of different types of work,’ but for me, in the back of my mind, it’s all interwoven.”
With the “Pee Chee” works, Martinez noted that he’s often using simple pens, like the ones that any high schooler might use in class. “I want to get people into galleries and museums; I want to speak to the youth,” Martinez said. “Speaking to and painting to these people.…I try to make things accessible to them.”
Isis Davis-Marks
Related Stories