In London, This Artist Rebuilt a Mythical Sculpture Destroyed by ISIS 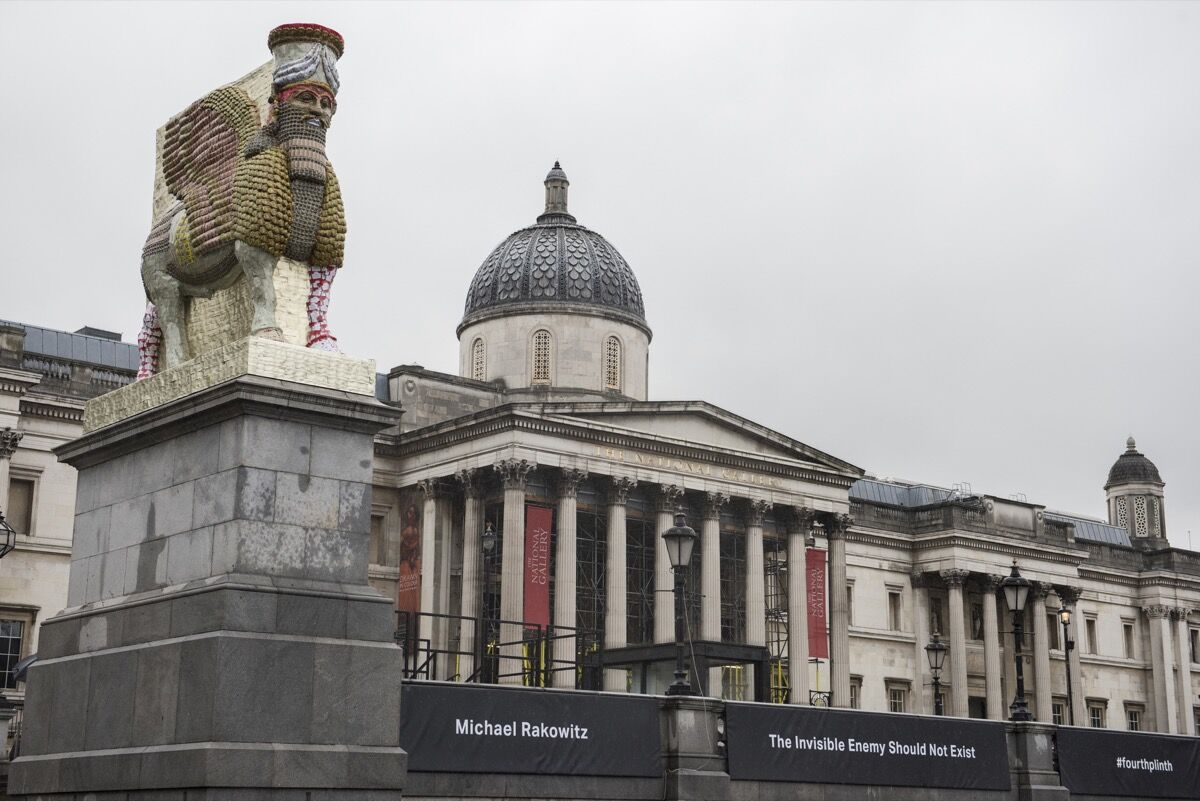 Michael Rakowitz, The Invisible Enemy Should Not Exist, 2018. Photo by Caroline Teo. Courtesy of the artist.

When
Michael Rakowitz
first visited London in 1984, his family treated him to a grand tour of the city’s cultural attractions. On the loftier end of their itinerary was the British Museum, where the future artist first encountered the Middle Eastern archaeological wonders that would one day inform so much of his encyclopedic practice. In a somewhat lower-brow excursion, they also invested in tickets to the London Dungeon—an institution combining the aesthetic restraint of a Wes Craven movie with the curatorial diligence of a Hard Rock Café merchandise stand. It clearly had a gruesome appeal.
“It was this institution devoted to misery,” recalls Rakowitz, who fixated on one exhibit in particular: a wax figure of Lord Nelson, showing the various body parts he had lost in battle. Later that day, the family passed through Trafalgar Square, where the same British admiral’s likeness towers over the city atop his eponymous column. Young Rakowitz’s priorities, it’s fair to say, were less than scholarly: “All I wanted to do was look at him through binoculars to see if the statue had the missing limbs,” he admits.
Three-and-a-half decades on, Rakowitz is back in Trafalgar Square with a rather different agenda. This morning, his sculpture The Invisible Enemy Should Not Exist was unveiled on a vacant plinth in the square’s northwest corner, where it will remain until March 2020. It is the twelfth contemporary artwork to take up residence on the site, which, since 1999, has hosted one-off commissions from European and British art-world giants including
Marc Quinn
,
Antony Gormley
, and
Hans Haacke
. 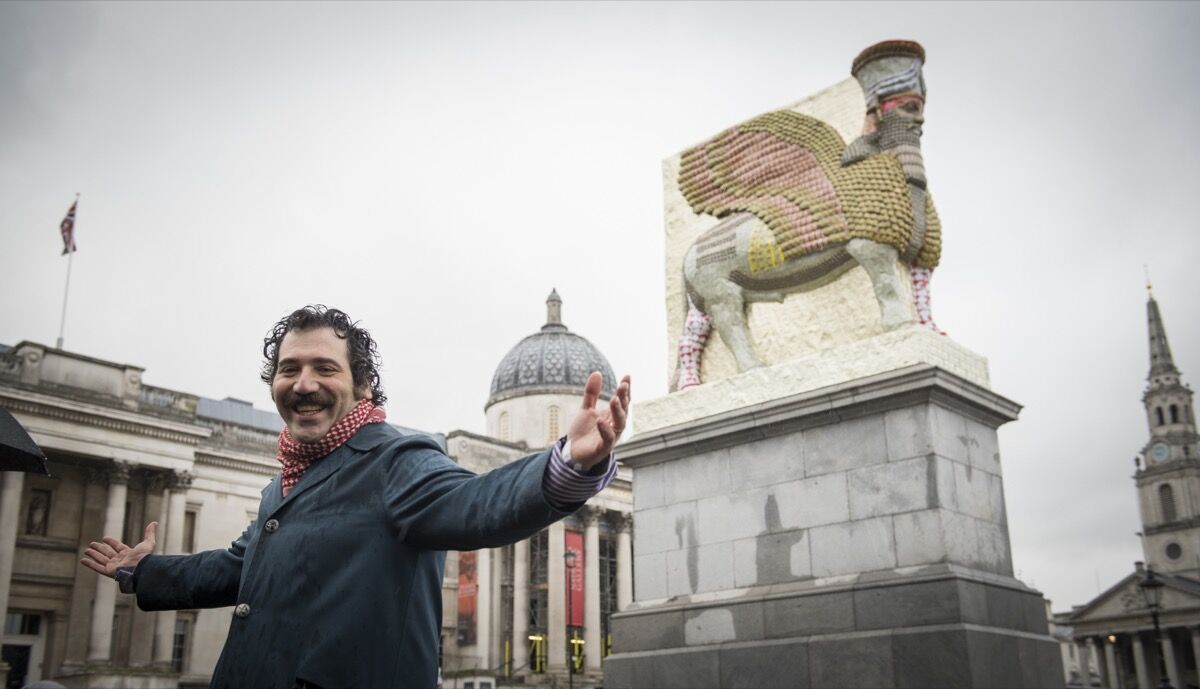 Michael Rakowitz, The Invisible Enemy Should Not Exist, 2018. Photo by Caroline Teo. Courtesy of the artist.

The plinth is one of four such pedestals arranged symmetrically around Nelson’s Column, all of which were intended to support statues of British monarchs and military heroes. While the other three were filled, plans to top out the final pedestal with an equestrian sculpture of King William IV foundered due to a lack of money. For a century and a half, the plinth stood unoccupied, an unintentional monument to near-sighted budgeting.
In the late 1990s, however, the recently elected Labour government began ploughing money into public art projects with the dual aim of boosting tourism and making culture accessible to all. Located at the heart of the capital, the Fourth Plinth was a perfect flagship for the strategy.
Mark Wallinger
was selected for the inaugural commission, with efforts from
Bill Woodrow
and
Rachel Whiteread
following in 2000 and 2001. A hiatus followed, but since 2005, it has been a regular event, and a popular one too—no mean feat in a city famous for its pessimistic temperament.
The program has its critics—notoriously, the former London mayor Boris Johnson’s election manifesto proposed permanently filling the space with a statue of a wartime fighter pilot—but it has arguably become the U.K.’s most prestigious running public art project. That Rakowitz, an American of Iraqi heritage, has been chosen is significant: He is the first non-European artist to be selected by the commissioning body, which has previously seemed, if not parochial, certainly limited in its tastes. Fittingly, then, that Rakowitz’s sculpture is a complex and highly original proposition that looks far beyond Trafalgar Square’s traffic-clogged confines. 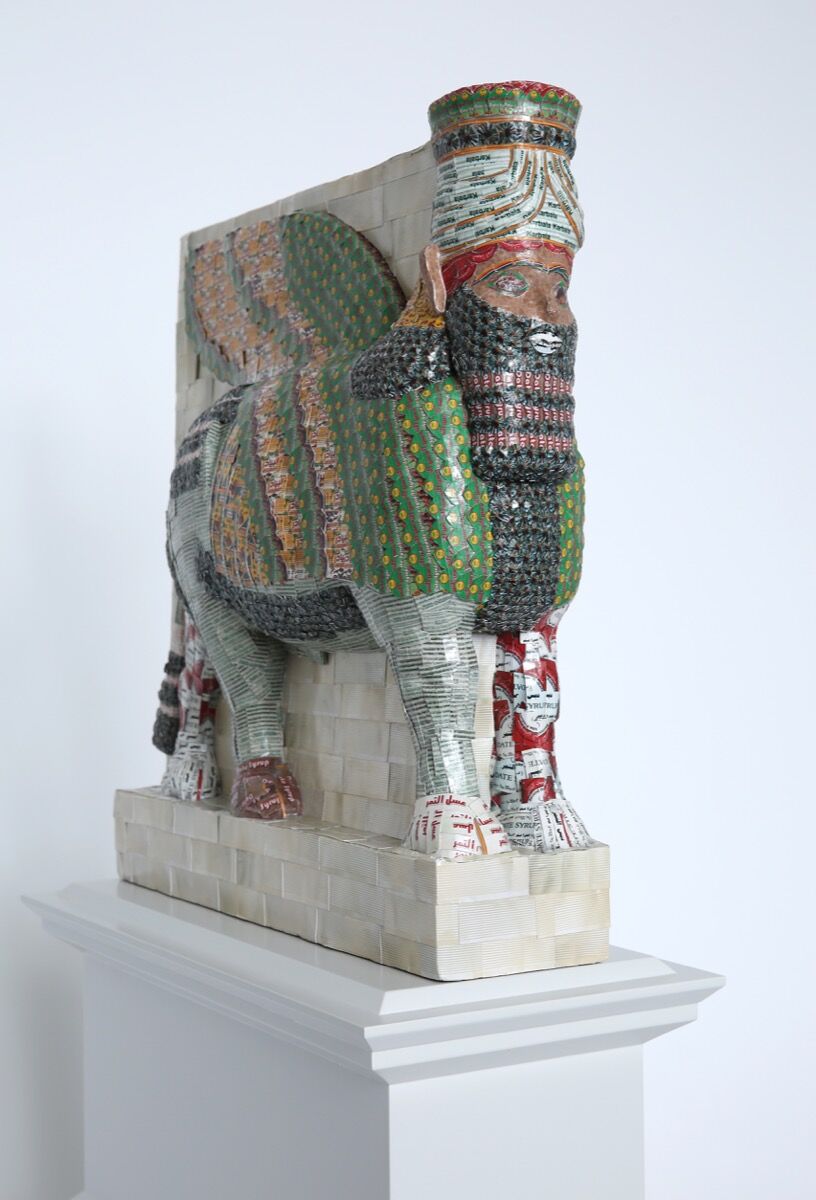 Michael Rakowitz, The Invisible Enemy Should Not Exist, 2018. Photo © James O. Jenkins. Courtesy of the artist. 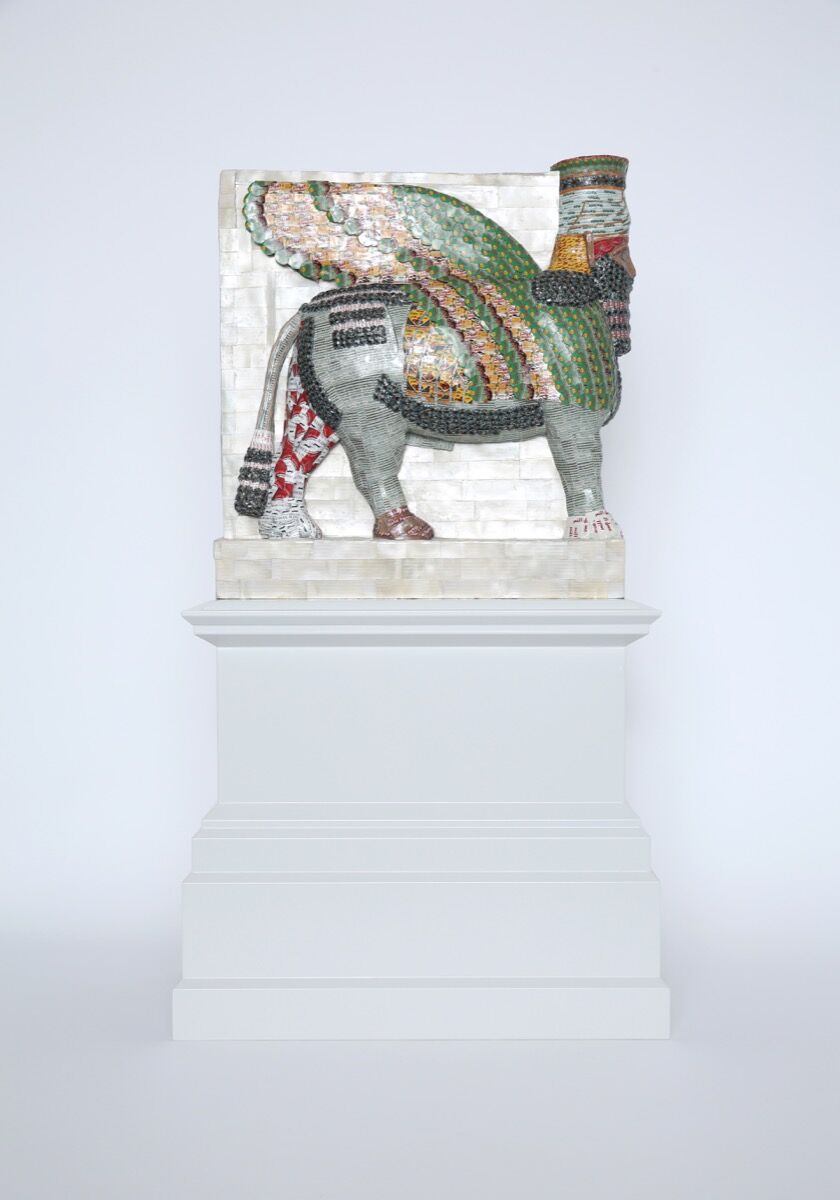 Michael Rakowitz, The Invisible Enemy Should Not Exist, 2018. Photo © James O. Jenkins. Courtesy of the artist.

Advertisement
The Invisible Enemy Should Not Exist is a recreation of a statue of a lamassu, a mythical winged beast that, for nearly three millennia, stood at the gates of the ancient city of Nineveh, in present-day Iraq. In 2015, this astonishing artifact was very publicly dynamited by ISIS militants, its destruction recorded for posterity in a widely circulated online video.
“It was performance, in a sense,” Rakowitz says. “Traditionally, the burning of books has been a gesture intended to demolish the pride of a people—a form of symbolic mass execution.” ISIS’s attempts to destroy Iraq’s extraordinary heritage of statuary served much the same purpose, even if some of the many supposed artifacts the terrorists desecrated turned out to be modern reproductions. “Replicas or not, the impulse was pretty much the same: liquidate items, and turn that action into part of a war machine.”
Rakowitz has made no attempt to conceal the fact that his lamassu is not the genuine article—quite the opposite, in fact. While the original was heroically carved from Mesopotamian stone, The Invisible Enemy Should Not Exist is a work constituted of rather humbler materials: namely, colorfully designed cans of date palm syrup, a commodity once vital to the Iraqi economy. Over 10,000 of these tins have gone into creating Rakowitz’s scale-model lamassu, creating a painterly rhythm of color and shape that ripples across the sculpture’s surface. There is a poignant resonance to them, too: According to recent figures cited by Reuters, Iraq once produced three quarters of the world’s dates—but after years of war, insurgency, and mismanagement, the country’s stake in global production has fallen to around 5 percent, with predictably dire results for its people. 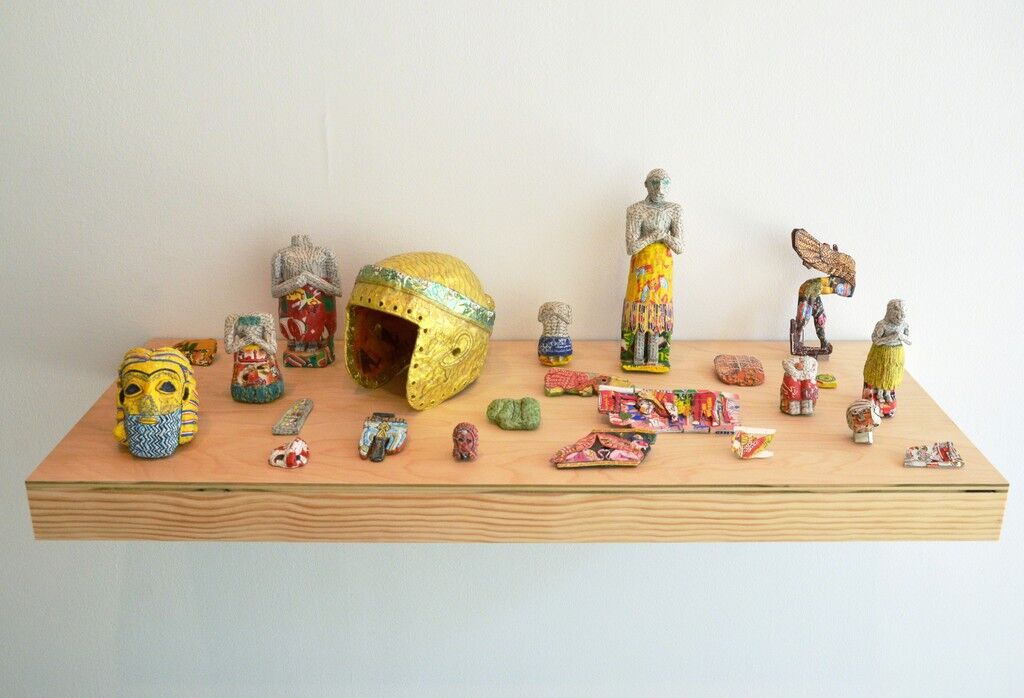 Michael Rakowitz
Grouping (The Invisible Enemy Should Not Exist), 2017
Rhona Hoffman Gallery
This isn’t the first time Rakowitz has employed these syrup tins in his work. His 2005 project Return saw him attempt to import cans labelled “Product of Iraq” into the U.S. via Syria and Lebanon, at once circumventing sanctions and shadowing the passage of refugees fleeing the post-2003 chaos that engulfed the country. Nor is this the only reference to his wider body of work in The Invisible Enemy Should Not Exist, which is just one component of a much larger, decade-long project of the same name. In 2007, Rakowitz took it upon himself to create life-sized recreations of the thousands of objects that went missing from the Iraq Museum after 2003, using a variety of materials so as not to create replicas that might be mistaken for the real thing. “Artifacts can end up mirroring the story of a people,” he explains. “It was important not to make an exact copy: You can try to reconstruct the artifact, but you can never bring back the people.” Following the rise of ISIS and the desecration that followed, the project’s scope expanded even further. “I felt it was a continuation of a commitment. The unfortunate thing about the project is that it’s had to continue.”
Despite this broad and astonishingly ambitious context—and the pouring rain that greeted its unveiling—The Invisible Enemy Should Not Exist works brilliantly as a site-specific sculpture in its own right. Trafalgar Square, memorably described by the novelist Will Self as “one of the most crap urban public spaces in the world,” is not an easy location for an artist to work with: Traffic, crowds, street performers, and a small army of historical statues conspire to crowd out any new work seeking to assert itself here. Many of the artists who have taken on the Fourth Plinth commission have failed to overcome these compromises, but Rakowitz has aced it.
For one thing, no photograph will prepare you for quite how huge the sculpture seems atop the plinth; far from being dwarfed by the square’s vast dimensions, it holds its own even when seen in opposition with the vertiginous shaft of Nelson’s Column. And rather than jarring with its uniformly gray surroundings, the sculpture’s colors—subtly varying tones of green, gold, and red—create an effect that is at once arresting and oddly solemn. This is pleasingly at odds with the jingoistic effigies of monarchs, empire builders, and kings with whom it shares space, yet even if it appears to be speaking a different language, it is still in dialogue with these other statues. Like them, the lamassu is the product of cultural myth-making—but it is also a reminder of how abruptly myths, and the people who identify with them, can be forgotten.
Digby Warde-Aldam
Related Stories