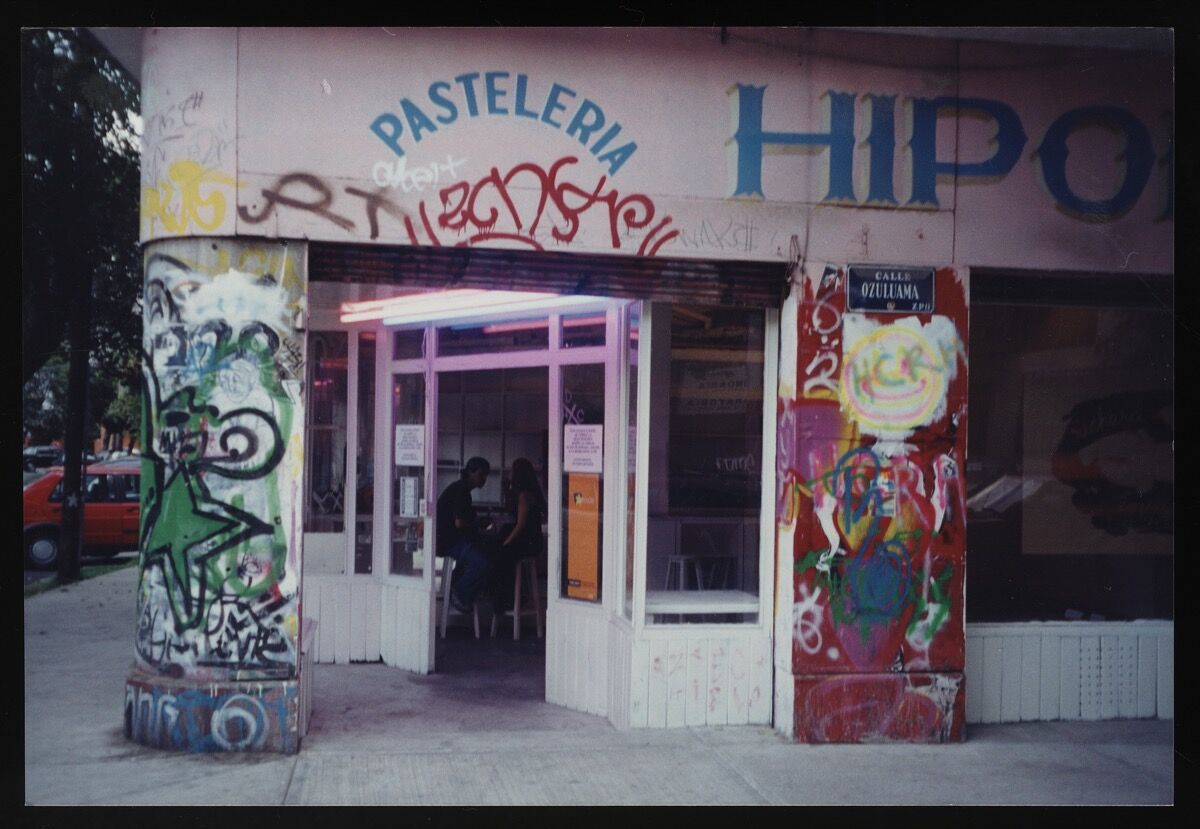 Mexico City’s flourishing scene of independent art spaces isn’t short on attention today. Lulu, Biquini Wax EPS, Lodos, and Casa Maauad, for example, have become familiar names for art and mainstream media alike. But the story of their predecessors isn’t always told. As innovative as it was controversial, Miguel Calderón and Yoshua Okón’s space La Panadería, among a handful of other artist-run initiatives of the late 1980s and mid-’90s, left a long-standing legacy that continues to thrive today. The two founders, who are both mounting solo shows in the Mexican capital—Calderón’s “Caída Libre” just opened in kurimanzutto’s temporary warehouse space and Okón’s “Miasma” opens this week at Parque Galería—share their insights around the history of the independent space and the changing cultural landscape of Mexico City.
In the early ’90s, artists Calderón and Okón—who were both studying abroad at the time—had the idea for an independent art space for social gatherings, to foster an exchange of ideas, and most importantly, to show their own work. “Following the student massacre of 1968, Mexico City became a very oppressive and alienated city,” Okón explains. “By the 1980s, it was incredibly difficult to have access to what was going on outside [Mexico], or even in the same city. Public gatherings of young people were illegal.”
In this context of relative isolation, in 1994, the pair founded the now-infamous art space La Panadería, housed in an old bakery (as the name suggests) that Okón’s parents bought in la Condesa, at a time when the area was relatively run-down and unappealing. NAFTA had just come into force, signed by then-President Carlos Salinas de Gortari of the Partido Revolucionario Institucional (Institutional Revolutionary Party), who held uninterrupted power for 65 years. “Public institutions and private galleries at the time only exhibited abstraction—the regime’s official art,” says Okón. 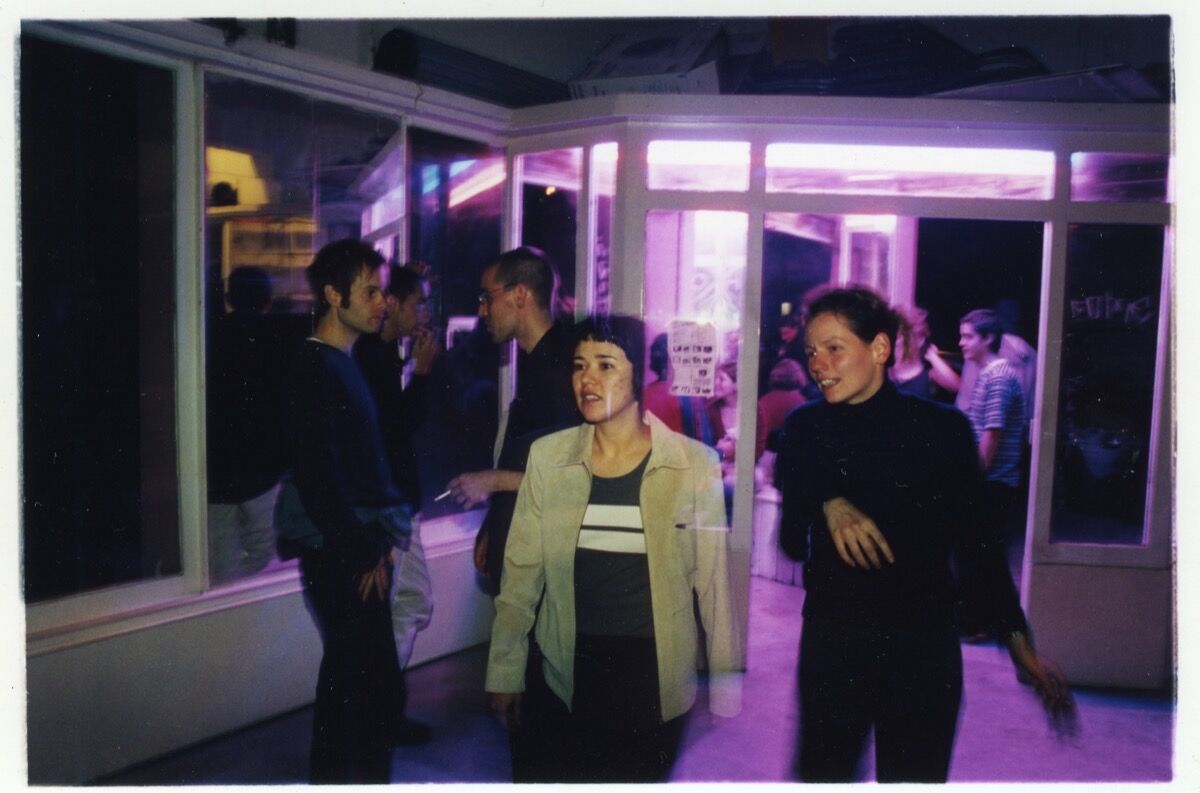 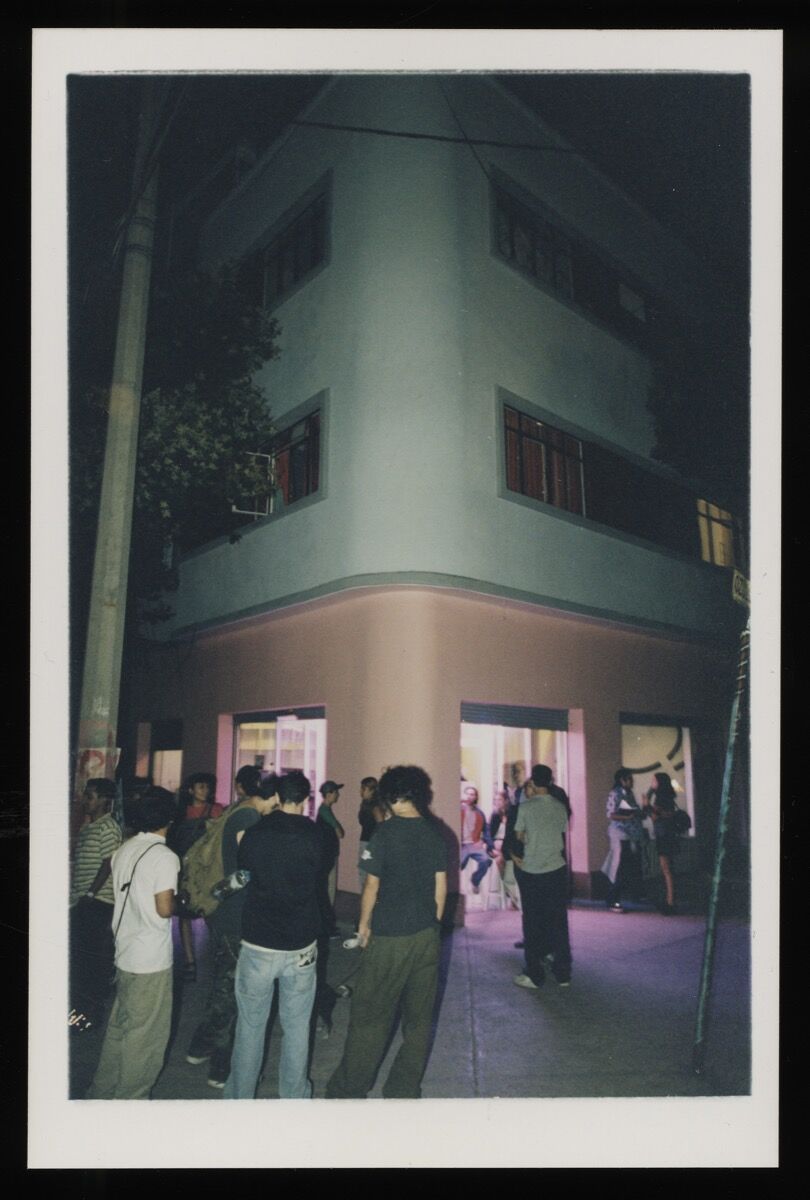 With a distinct DIY attitude, La Panadería hosted hundreds of exhibitions, performances, events, and parties that defied the art-world establishment, until it closed in 2002. The organizing members essentially lived there, regularly joined by friends, supporters, and guest artists. “It was a necessity,” Calderón recounts. “The art context was extremely official,” adds his active collaborator, the filmmaker Artemio Narro. “It was really hard to penetrate into the art system.” For many years, aside from the odd grant (like a grant from the US-Mexico Fund for Culture), La Panadería relied on its parties and beer sales to be financially sustainable, which reaffirmed the social and inclusive ethos of the group. “What Miguel and Yoshua did at the time was quite radical, more conceptual than most places,” remembers American performance and video artist Jennifer Locke, who stayed at the space in 1995 as part of a group show of female artists from the Bay Area.

After the 1994–1995 financial crisis, the role the art space played became more important, argues Mexican curator Pablo León de la Barra, Guggenheim UBS Map Curator, Latin America: “In a moment where everything was collapsing, La Panadería and others became spaces of resistance and creation in a period of institutional and market failure.”

The international ambition of La Panadería was a key element of its development, and is often credited as having significantly contributed to reconnecting Mexico to the broader art world. “When we opened the space, the first thing I started doing was: ‘I like
Mike Kelley
. Let’s invite Mike Kelley,’” Calderón remembers. “He didn’t come! But a lot of other artists did come.” Over the years, internationally celebrated artists such as
Richard Kern
,
Sharon Hayes
, Kurt Hollander, the collective
Gelitin
, and, of course, Mexico-based
Francis Alÿs
exhibited at the former bakery. “We devoted a room in the building to foreign artists,” explains Okón. “Soon, many of us were getting invitations for exhibitions abroad.” 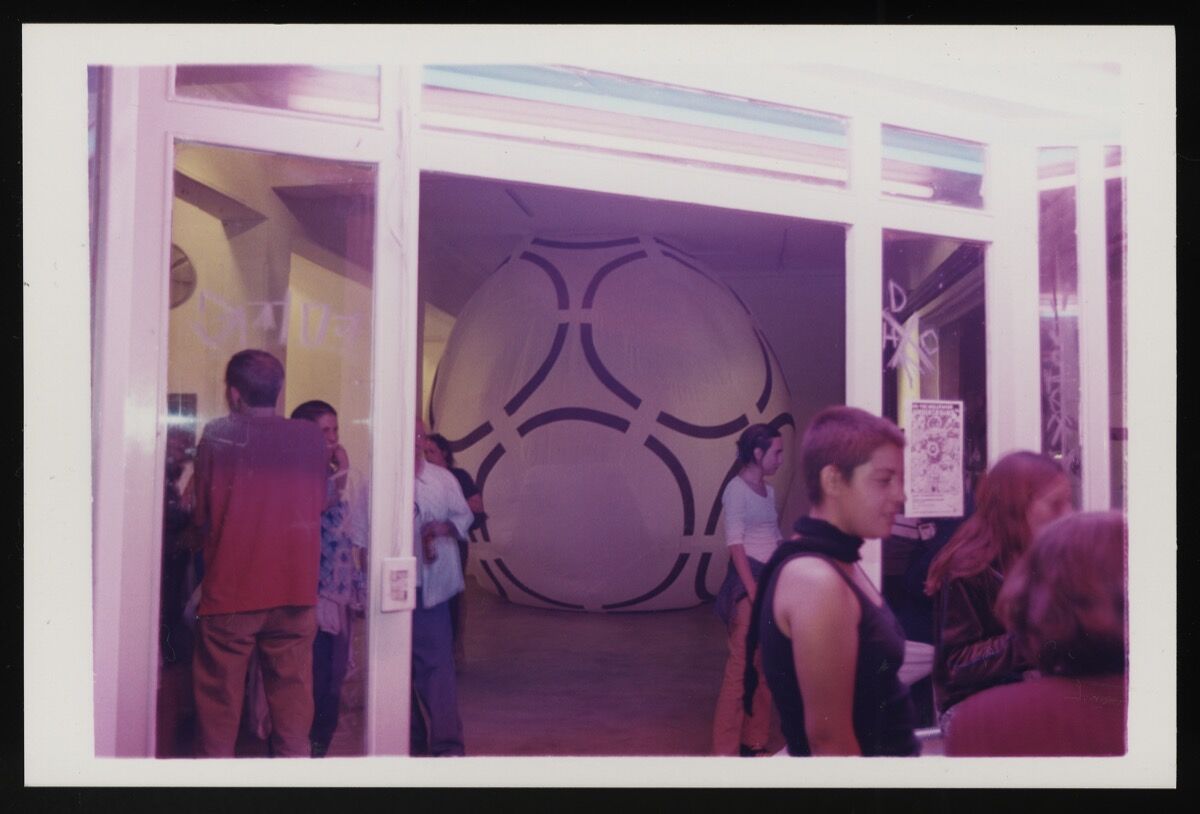 Opening of “Gooooldorado” by Andrea Gergeley and Matthias Zyan, 1999. Courtesy of Yoshua Okón and La Panadería.

Advertisement
But towards the late ’90s, during the height of their popularity, the group also faced certain criticism. While their neighbors quite simply thought they were a satanic cult, segments of the local art scene felt alienated. “People were like ‘you run this space, you have a responsibility to show Mexican art,’” Calderón recalls.

The predominantly white, male, upper-middle-class profile of its organizers also raised a few eyebrows. In a paper presented at Apexart Conference 3 in 2004, curator and writer Michèle Faguet (a director at La Panadería in its later years) points to the paradox of how a desire to break with a “dominant value system associated with traditional Catholic morality” translated into a “highly masculinist, even misogynistic, subject position whose visual repertoire consisted of titty shots, guns, monster trucks and other bad-boy, bad-taste instances of cultural slumming.”

León de la Barra, however, remembers a more diverse picture. He recalls the queer illustrations of artist Rodrigo Aldana, radical installations by
Teresa Margolles
’s collective SEMEFO (known for their work with corpses and bodily fluids), and the regular presence of local trans icon Vicky Fox. “I discovered there a space of total freedom, where art was the excuse for this freedom to happen,” León de la Barra says.

At the turn of the century, the context of the Mexican capital and the global art world had drastically changed. Somewhat the victim of its success, La Panadería faced an identity crisis that would eventually be the beginning of the end. “All of a sudden, contemporary art was fashionable, the art world got a lot bigger, and there was money at stake… For artists coming from this very independent, not-for-profit, do it yourself attitude, it was a very confusing time,” says Okón. “Many of us had the feeling that it needed reinvention. But I honestly had no idea how, things just happened too fast. So our ‘solution’ was to simply close.” 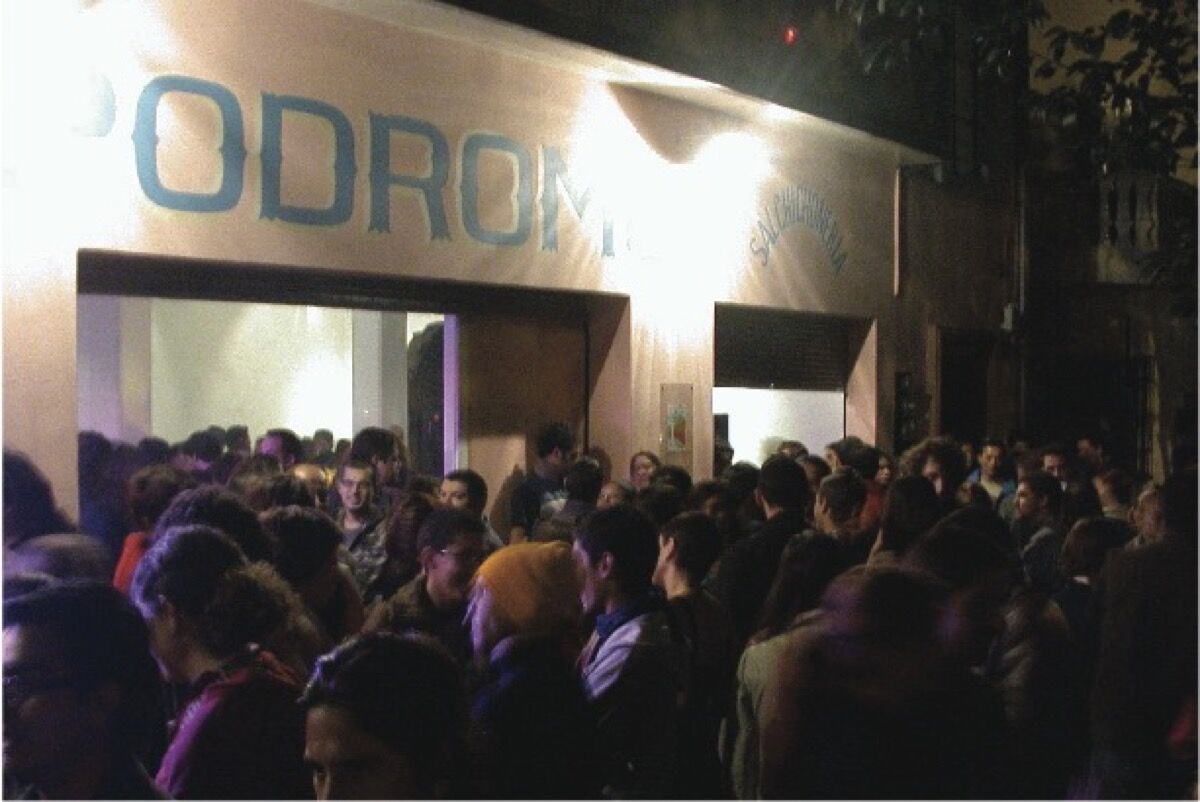 Over 20 years after its creation, what isn’t contested is the significant legacy that the relatively short-lived space left behind. “A lot of the energy from the 1990s has continued to be a source of inspiration for many of the younger spaces existing today,” explains León de la Barra, who argues that the mid-2000s was marked by a proliferation of commercial galleries with “independent spirit,” rather than non-profit initiatives. But today, while Mexico is armed with more galleries, art fairs, institutions and private foundations than ever before, around 60 independent art spaces have cropped up within the last five years, according to research by artist
Tamara Ibarra
.

“If a given scene lacks project spaces, it is ecologically unsound, unbalanced, and the scene suffers as a consequence,” says American writer and curator Chris Sharp, co-founder of the acclaimed white-cube-like project space Lulu, which launched in 2013.

“We are somehow indebted to spaces like La Panadería or Temistocles 44,” says Israel Urmeer, an active member of the radical space and artists group Biquini Wax EPS. “But we believe that the tradition of the artist-run space as a genre has its roots in the Mexican modern art utopian notion of ‘integración plástica’ (loosely translated as ‘artistic integration’) of Mexican muralists.”

Okón, now a co-founder of the non-profit, educational organization SOMA, doesn’t shy away from talking about this recent revival of independent spaces in Mexico City. “I think that many artists began to realize that the neoliberal myth that the market can take care of all our cultural needs is simply not true,” he says. “We also need structures that can operate with a different logic.”