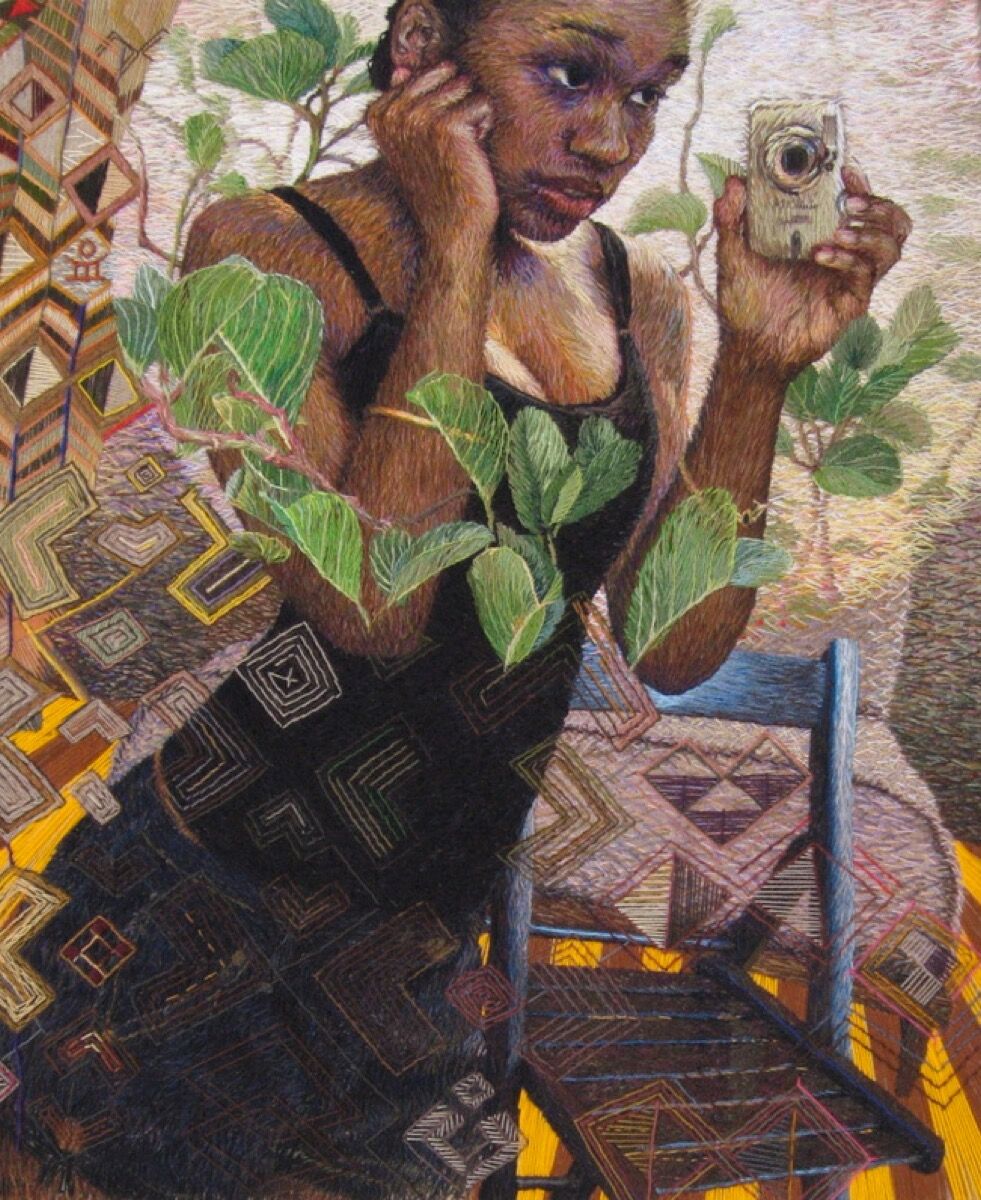 Ruth Miller, The Evocation and Capture of Aphrodite. Courtesy of the artist. 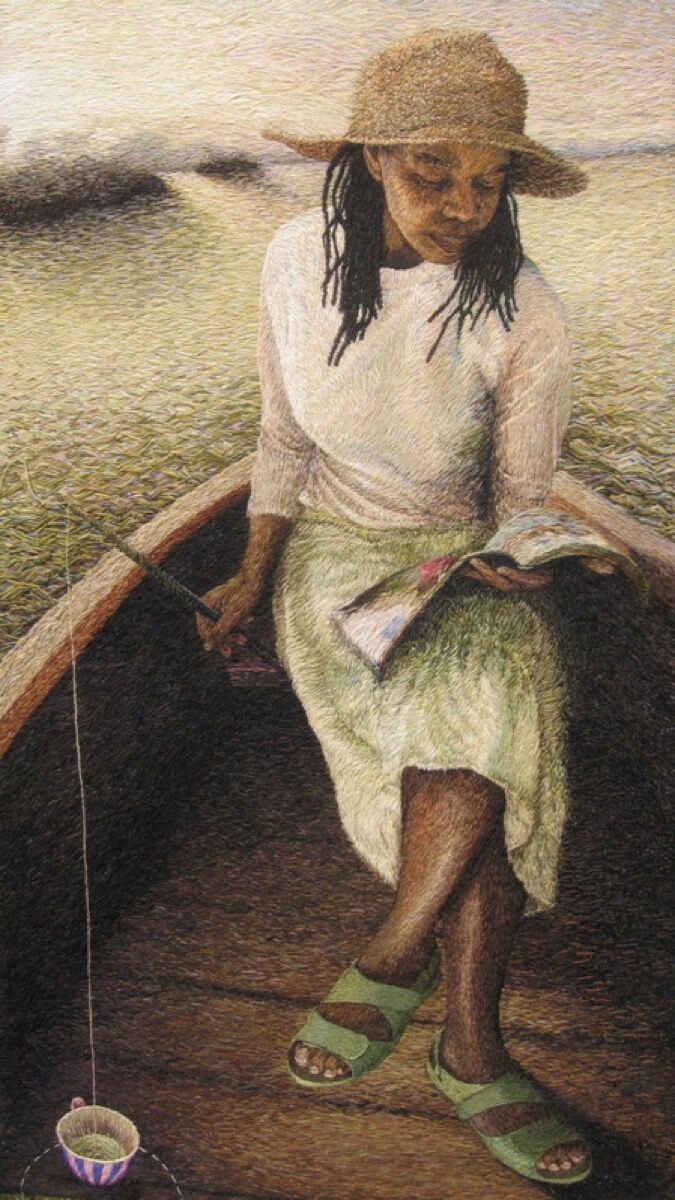 Mississippi Gulf Coast artist Ruth Miller creates large narrative portraits and domestic scenes in vibrant hues. In her best-known work, Teacup Fishing—a nearly 5-foot-long, 3-foot-wide piece—a black woman’s skin looks touchable and lustrous, its surface layered in golds and pastels, shadows and undertones. She wears a wide-brimmed hat on top of loose hanging locks; a clean, worn-in blouse and skirt; and green sandals with her bare toenails visible. She sits languidly in a boat, situated on a small, blue-green body of water. On the horizon, a sunset explodes in lavenders, pinks, and blues. She reads from a magazine in her left hand, while her right hand is clasped on a fishing rod; curiously, its line has landed in a cup of tea, instead of in the lake. The woman doesn’t seem to notice; or maybe, she isn’t bothered that it’s been misplaced.
Looking from a distance, the finely detailed work is stunning in its vitality, resembling a painted portrait. Indeed, Miller studied painting at Cooper Union in the late 1960s, and her sister, Ohio-based choreographer Bebe Miller, was the model for the piece. Yet every tendril, each atom of brushstroke-like detail, was hand-stitched—sewn using Paternayan wool yarn against a steady backing fabric. Working on and off between a cross-country move and renovating a new home, it took Miller almost seven years to complete the grand embroidered tapestry.
Miller’s works convey beauty and meaning in ways that are different from painted objects, while also troubling the notion that embroidery is craftwork rather than fine art. Miller says she has a personal, physical connection to the objects she makes that she didn’t feel while painting, perhaps due to the long hours involved. She also feels an “inexplicable connection between embroiderers of the past” when completing a piece; she can visualize a community of artists across time that she uses her work to commune with.
Miller lives and works in an unincorporated town on the Gulf Coast, but she was born and raised in Manhattan. The oldest of three siblings, she had a busy, city-kid childhood going to museums, plays, and dance and music lessons. Her Mississippi-born mother taught her to sew, and two of her aunts taught her the basics of needlework.
2 Images
View Slideshow 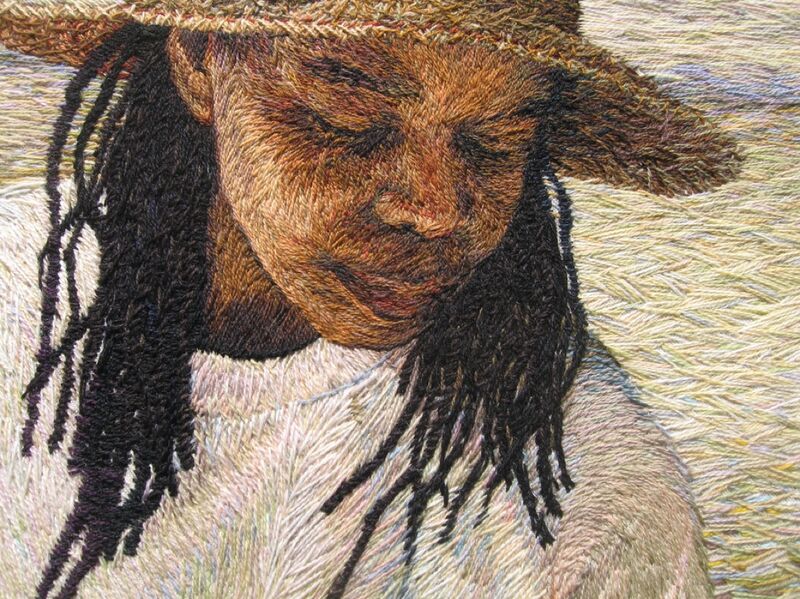 After graduating from the High School of Music & Art in Harlem (which eventually merged with LaGuardia Arts), Miller discovered, while enrolled at Cooper Union, that the material reality of painting didn’t suit her. “The texture of turpentine [used to thin oils], the paints, it was all messy stuff,” she explained on a call from her home. Instead, she took to the clean and quiet of textiles.
This began after Miller had a chance encounter with a work by Senegalese textile artist
Papa Ibra Tall
, a former arts minister of Senegal, at Montreal’s Expo 67. Since his student days in Paris in the mid-1950s, Tall created large-scale tapestries depicting deconstructed figures in bold, primary colors. Seeing Tall’s work helped Miller envision her own future. “It was the first time I’d seen painterly images captured in needlework,” she said.
After raising children, Miller moved to the Gulf Coast from New York to more easily focus on her practice. It took about seven years, but she found community and a rhythm. For each piece, she takes several reference photos and draws her subject on paper and fabric. She then decides on a color palette. After this preparation, most works take 19 months of stitching to complete.
Across time, needlework artists have used woven, quilted, or embroidered fabrics for several purposes: to convey status and communicate messages or lessons; to mark history; for utility, decoration, and adornment; as talismans; and for storytelling and mythmaking. The Bayeux Tapestry, perhaps the world’s most well-known work of embroidery (on display at France’s Bayeux Museum), was made of yarn and linen in the 11th century by a host of nameless (likely female) artisans, and depicts about 50 scenes on the Norman invasion of England. For his part, Tall was inspired by the numerous textile traditions of Senegal, such as pagne tissé, a hand-woven loincloth made by the Manjak ethnic group and traditionally used in ceremonies. 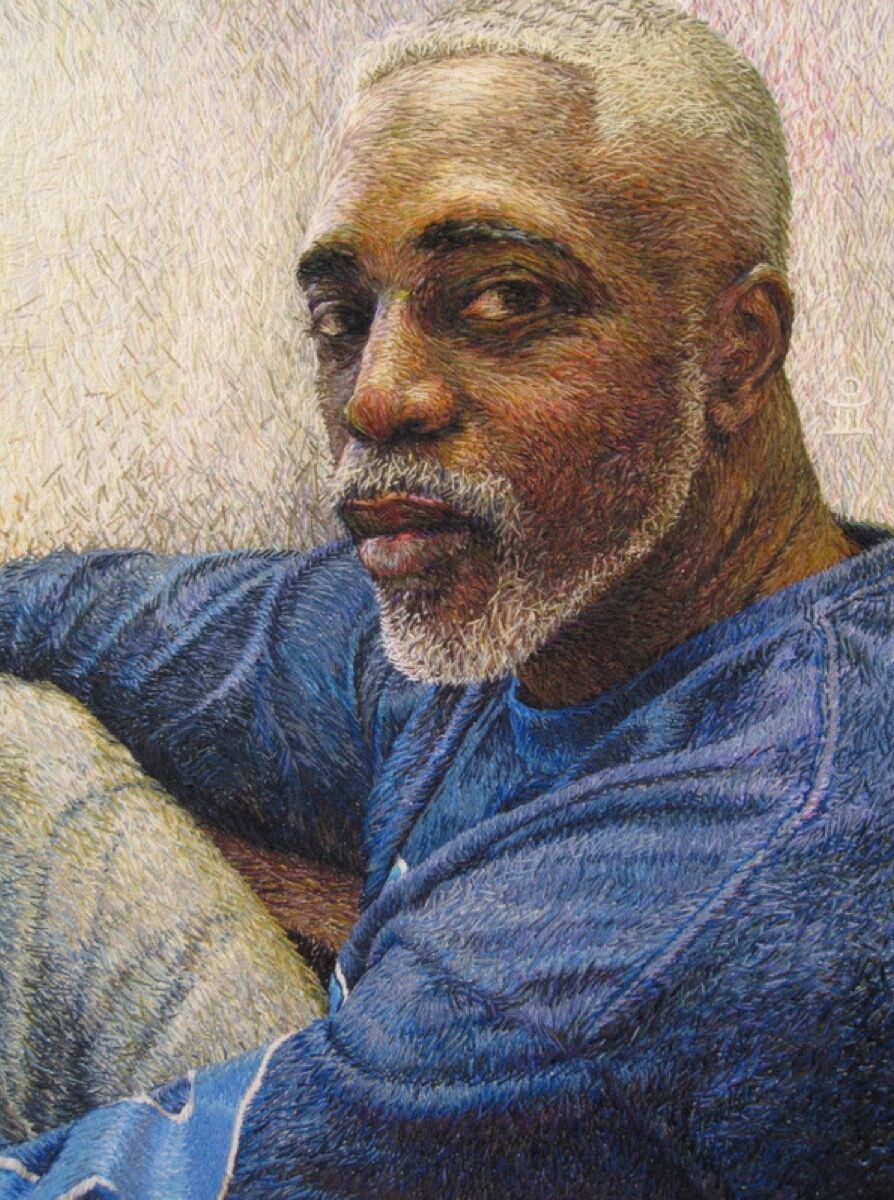 Ruth Miller, The Impossible Dream is the Gateway to Self-Love. Courtesy of the artist. 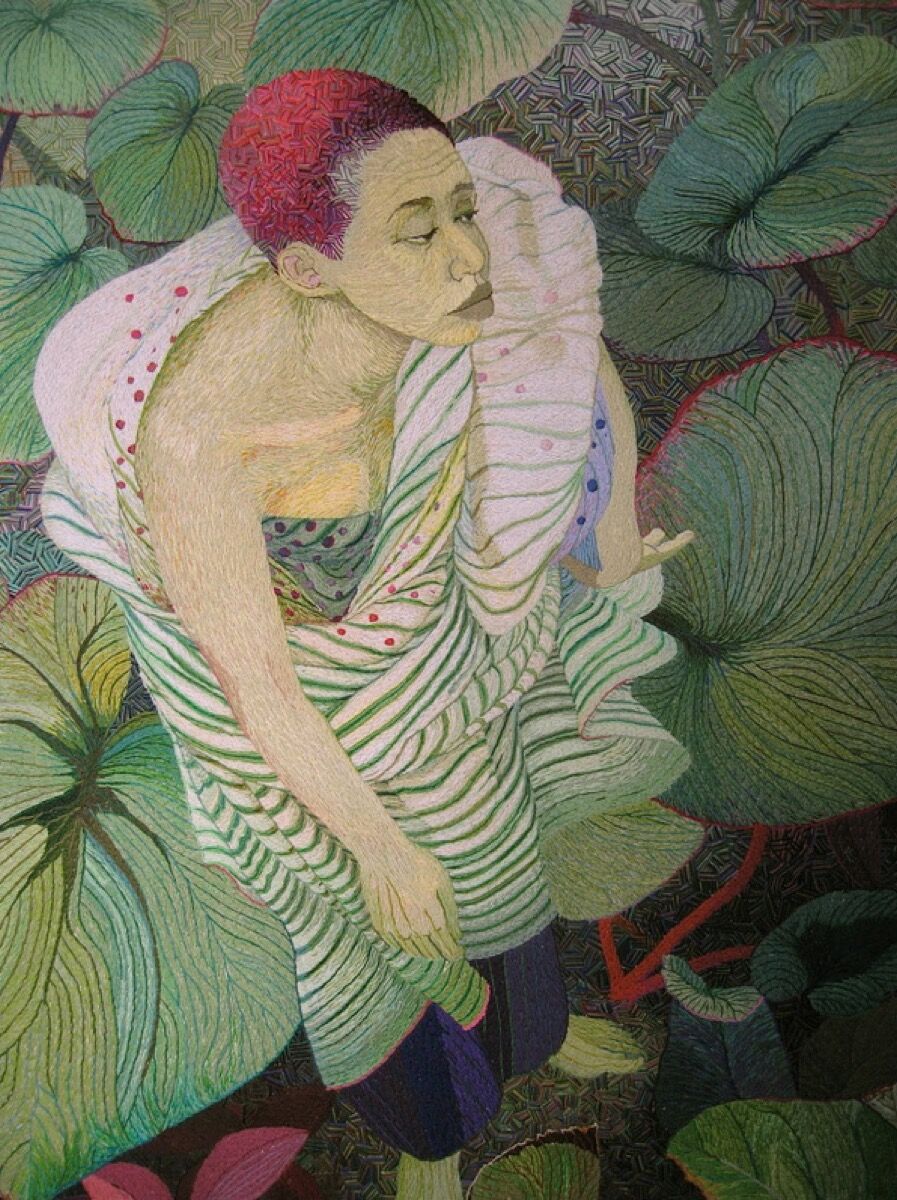 Advertisement
In her embroideries, Miller has drawn from the motifs of Bakuba and Adinkra textiles, which come from the Democratic Republic of Congo and Ghana, respectively. She has also found inspiration in the
ukiyo-e
style of Japanese woodcuts, which were originally used to disseminate spiritual texts. Despite its long history, and the time and skill that goes into it, embroidery has not always been as esteemed or revered as other art forms that are more readily associated with the creative impulse. But a wave of contemporary artists, including Miller, have begun to change that.
Miller develops her narrative pieces from the texture of her own life; the tapestries are often her attempts to work out answers to questions of both the earthly and spiritual realms. Many feature women as protagonists and softly reflect on an unencumbered blackness. In Flower, a self-portrait set in seafoam green and magenta, Miller wears a dress draped across one shoulder, hinting gracefully at a quiet but resolute sensuality. Our Lady of Unassailable Well-being depicts a black woman with a short afro, wearing yellow and smiling widely against a backdrop of fabrics of different shapes, sizes, and styles, with a blue sky halo around her head.
Though she was never looking for gallery representation (and doesn’t consider herself “commercially oriented”), Miller has worked with Mount Vernon–based gallerists Karen Mackey Witherspoon and Sharon Mackey McGee since meeting them at a small Harlem exhibition nearly a decade ago. The Mackeys enjoyed Miller’s metaphysical explanation of her work: She was showing an unfinished version of Teacup and told an audience that the piece was about a person “fishing in the teacup when she should’ve been fishing in a sea of opportunity.”
Miller said that she hasn’t yet developed her work in all the directions it can go. She’s interested in the possibilities of fiber as a fluid, sculptural medium, and, inspired by artists like
Nick Cave
and
Ruth Asawa
, she is beginning to make multidimensional pieces that can live beyond walls—and any other limitations.
Danielle Jackson