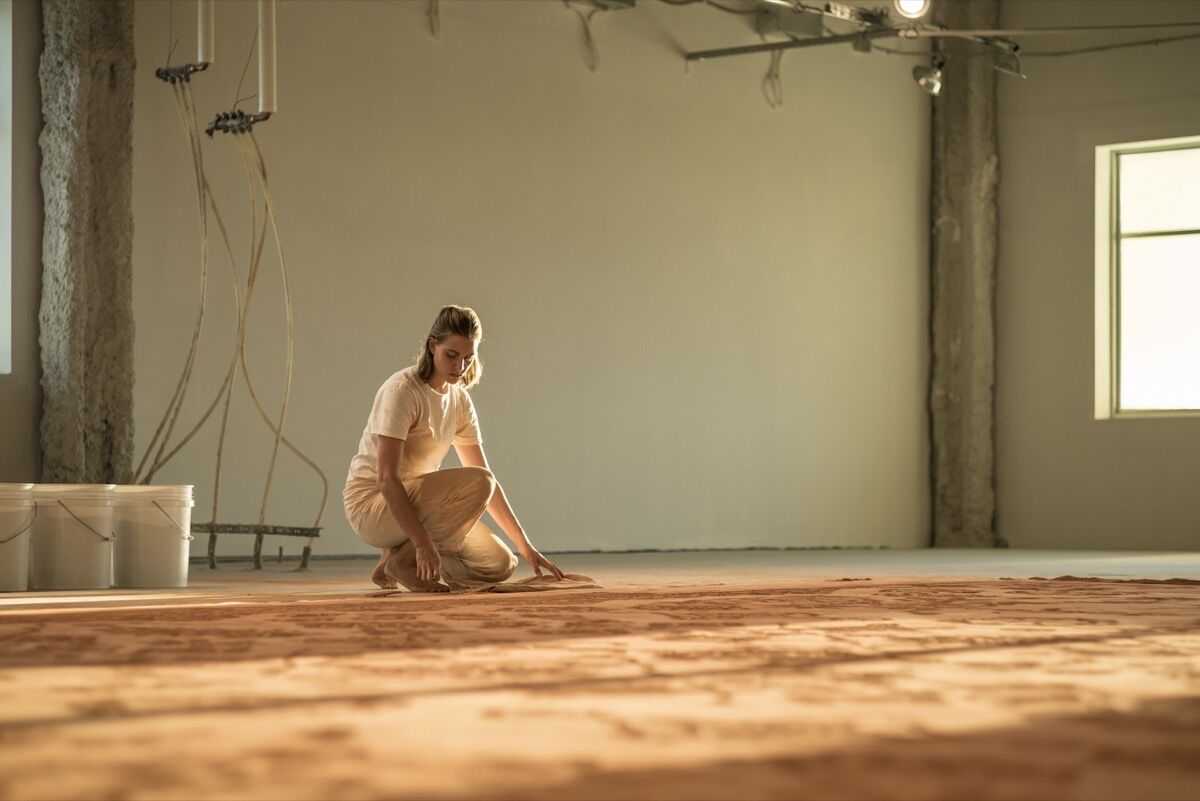 Bison herds, oil pipelines, land runs, and dust storms have all unsettled and altered the distinctive red clay earth of Oklahoma. “For me as an artist, the red dirt has come to represent Oklahoma in all its complexities and contradictions,” said Tulsa-based
Rena Detrixhe
.
Before it became the 46th state in 1907, the land was designated by the U.S. government as “Indian Territory” for forcibly removed indigenous people; in the 20th century, the ground was drilled for oil, and its dirt blew as far as the East Coast in the worst days of the Dust Bowl. Now underground disposal wells from gas drilling—such as fracking—have been linked to a rising number of earthquakes in the state.
Oklahoma is not the only place with an ochre-hued soil, but this historical intertwining of terrain and people has made “red dirt” a cultural signifier. “Red dirt symbolizes grit, perseverance, sorrow, pain, spirit, resilience,” Detrixhe said. “While it is rooted here in Oklahoma, I believe it has national implications.” 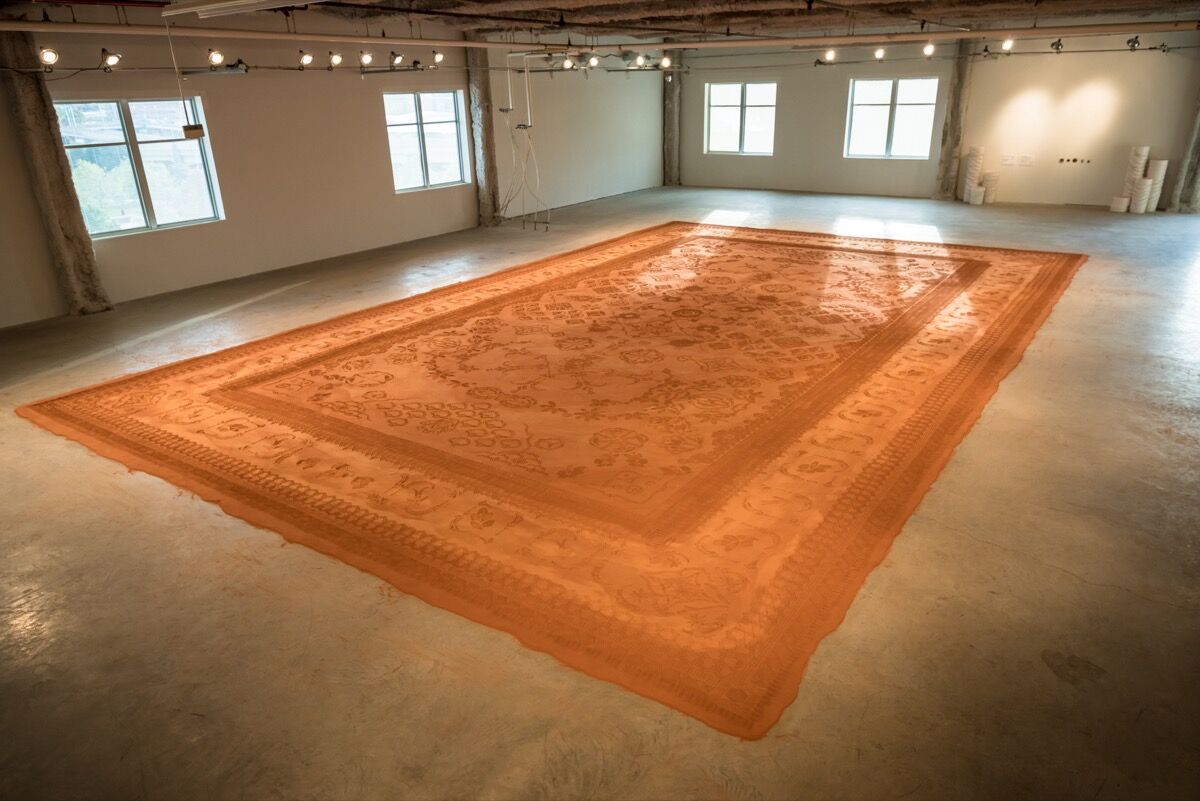 As a meditative response to these ideas, Detrixhe collects gallons of red dirt by hand, usually at local excavation or construction sites, and transforms them into ornate “tapestries” that are ultimately swept away. Over two years, she has created several versions of Red Dirt Rug—always with Oklahoma soil—in museums and galleries in six states. On March 14th, her latest in the series opens at the Philbrook Downtown in Tulsa. For around three weeks, she will be on site, spreading a 650-square-foot layer of dirt and carefully stamping it with patterns made from found shoe soles. Following this performative installation, the delicate piece will be exposed to the gallery elements until July 22nd.
“Rena and I had a long conversation about entropy, and how she doesn’t want that to happen, but she also understands that it does and it will,” said Philbrook curator of modern and contemporary art Sienna Brown, who organized the exhibition. “We’re hoping no kids make dirt angels in it, but she said that no matter where she does this, invariably a little bug will track across it. And that’s okay, that’s part of the life of the object.”
Detrixhe’s process is slow and arduous. First she grinds and sifts the dirt into a fine dust, then spends hours shaping the soil and pressing it with floral and geometric forms. This ritualistic and ephemeral labor is akin to the making of Tibetan Buddhist sand mandalas. “I think the piece offers a sense of time—or a scale of time—that we don’t often afford ourselves, or that we aren’t allowed to experience, in our daily lives,” the artist said. “What if we, as a culture, spent hundreds of hours getting to know our surroundings intimately?” 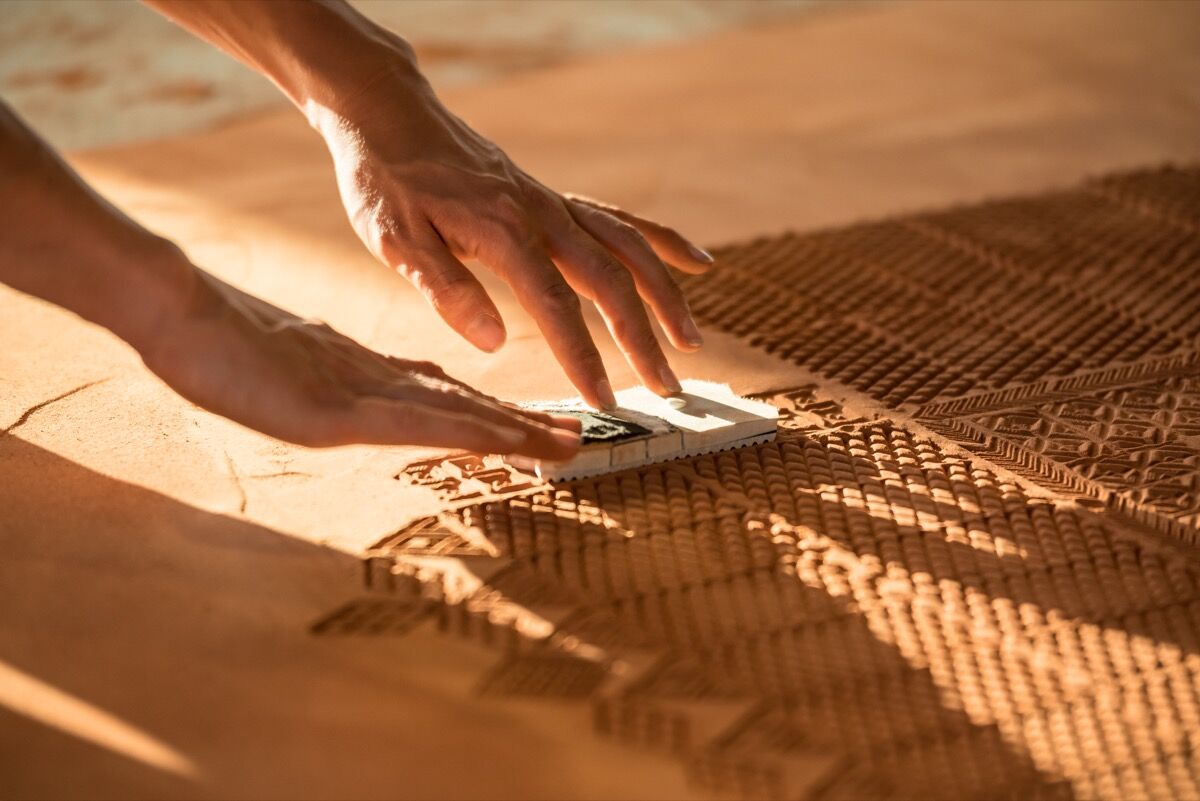 Advertisement
Detrixhe often works with found materials and visuals from nature: Syllables of Water (2016), a window mural installed at 108 Contemporary in Tulsa, resembled droplets of rain; while Rosaceae (2015), at Paragraph Gallery in Kansas City, involved the meticulous weaving of crab-apple berries into an elegy for a lost tree.
She first engaged with red dirt as a way to understand Tulsa, where she was based through the Tulsa Artist Fellowship—making the Philbrook show a sort of homecoming. This latest iteration of her project takes design cues from rugs in the permanent collection of the museum, as well as the
Art Deco
architecture of downtown Tulsa, and the flora and fauna of the state.
The Philbrook Downtown opened in 2013 as a satellite facility for the Philbrook Museum of Art. (The institution’s main branch is housed in a stately 1920s Italian Renaissance-style villa.) The whole first floor of this new location was recently converted into a project space for contemporary artworks; Red Dirt Rug will serve as one of its first experiments. “We’re interested in having some of the artists’ processes and social practices be part of our programming,” Brown said. “So this is a great way for us to hit on a lot of those at once, with a project that’s really beautiful and that our audience can connect with.”
As Detrixhe’s dirt rug takes meticulous shape at Philbrook Downtown, visitors can watch as a typically ordinary substance is imbued with meaning. “I’m not sure that a single work of art can adequately represent the multitude of complicated histories,” she said. “But if any material can hold all of those things in it, it would be soil, earth.”
Allison Meier
Related Stories