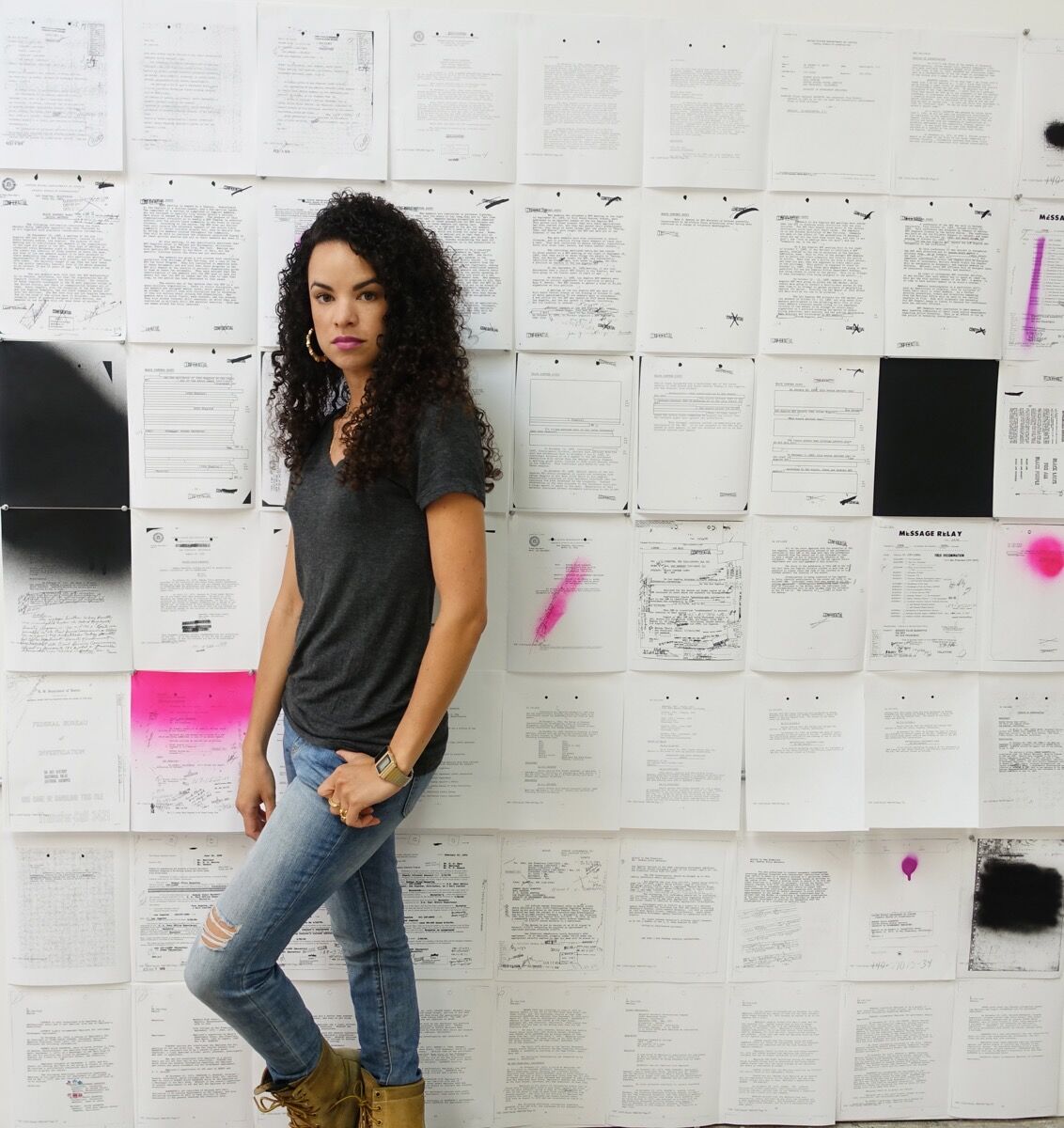 In the summer of 1969, the former FBI director, John Edgar Hoover declared that “the Black Panther Party, without question, represents the greatest threat to internal security of the country,” and then vowed to destroy it. Sometime before Hoover’s speech, the Federal Bureau of Investigation placed Rodney Barnette under surveillance. He was a founder of the Compton, California, chapter of the Black Panther Party for Self Defense, known as Section 9-A. FBI agents, working under the covert program, COINTELPRO, listed Barnette as “an ADEX subject (Category I, Extremist),” and catalogued decades of his daily life. The intimate, biographical details were gathered by agents who interviewed Barnette’s employers, neighbors, high school teachers, and siblings, and enlisted eight informants—individuals who regularly attended Barnette’s Panther meetings. One entry reads: “In 1972, he held a leadership position in the Angela Davis Defense Committee. [redacted] on 1/10/72 stated Barnette is a homosexual.” The 500-page dossier is the primary source material of his daughter, artist
Sadie Barnette
’s new exhibition, “Do Not Destroy,” at the Camera Club of New York’s Baxter St gallery.
“We requested recently his FBI file through the Freedom of Information Act,” Sadie tells me. Her show, her first solo in New York, coincides with commemorative events to honor the 50th anniversary of the founding of the Black Panther Party. “It took four years to get the files, and now I’m reclaiming them, and repurposing them, to tell my dad’s story, and to tell the story of the government surveillance, and how they really dismantled the Black Panther Party.” 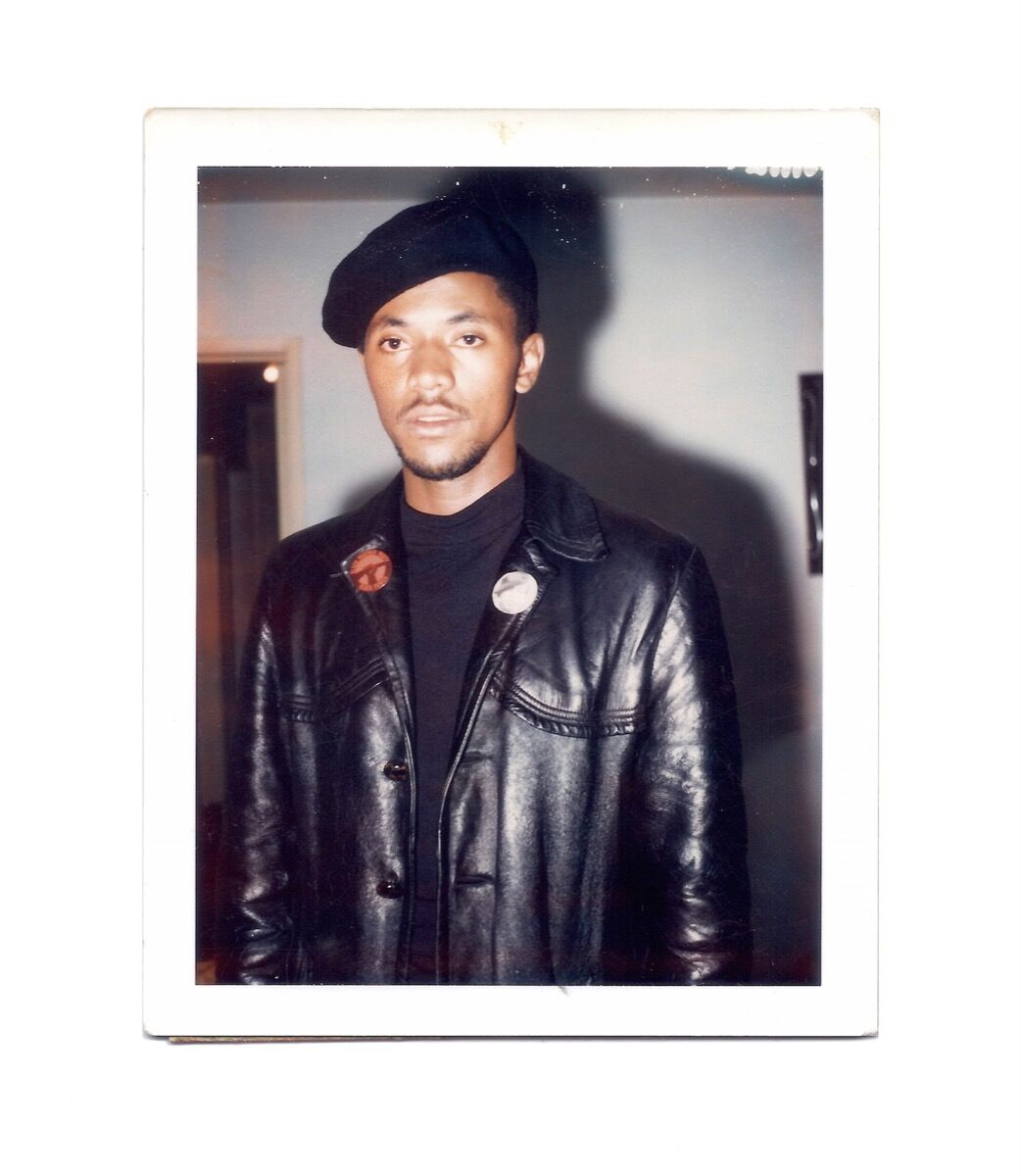 Established in 1966 by civil rights activists Huey P. Newton and Bobby Seale in Oakland, California, the Black Panther Party had come under bureau investigation for their shouts of “Black Power!” and their “Ten Point Plan” of sensible stances. The Party declared, for instance, “We want power to determine the destiny of our Black Community” and “We want an immediate end to POLICE BRUTALITY and MURDER of Black people.” The party’s platform appealed to Rodney after he returned home from Vietnam. In October 1965, he was drafted, like his father and grandfather before him. He served honorably for 13 months, received a purple heart, and came home a decorated infantryman, with the hopes that his country would honor his patriotism with dignity and opportunity. There is a diptych of two enlarged portraits, titled, Untitled (1968) (2016), in his daughter’s first New York solo exhibition, of a younger Rodney. In one photograph he wears his army uniform, adorned with medals; and in the other he dons the iconic black leather jacket and beret, symbols of Panther solidarity.
“When I got out of the Army, my nephew got killed in Vietnam and I came to L.A. to go to his funeral,” Rodney recalls. “Police shot some black men in L.A. and were going on military operations in the black community. They had Ku Klux Klan in Compton, California, that tried to drive black people out of Compton, burned crosses on property and so forth. Something had to be done,” he says, adding that he felt personally motivated to take action. “[The Black Panther Party] symbolized a resistance to oppression that we felt as black people in our communities. The most sensible and reasonable thing to do was to join an organization that was dedicated to ending that.” 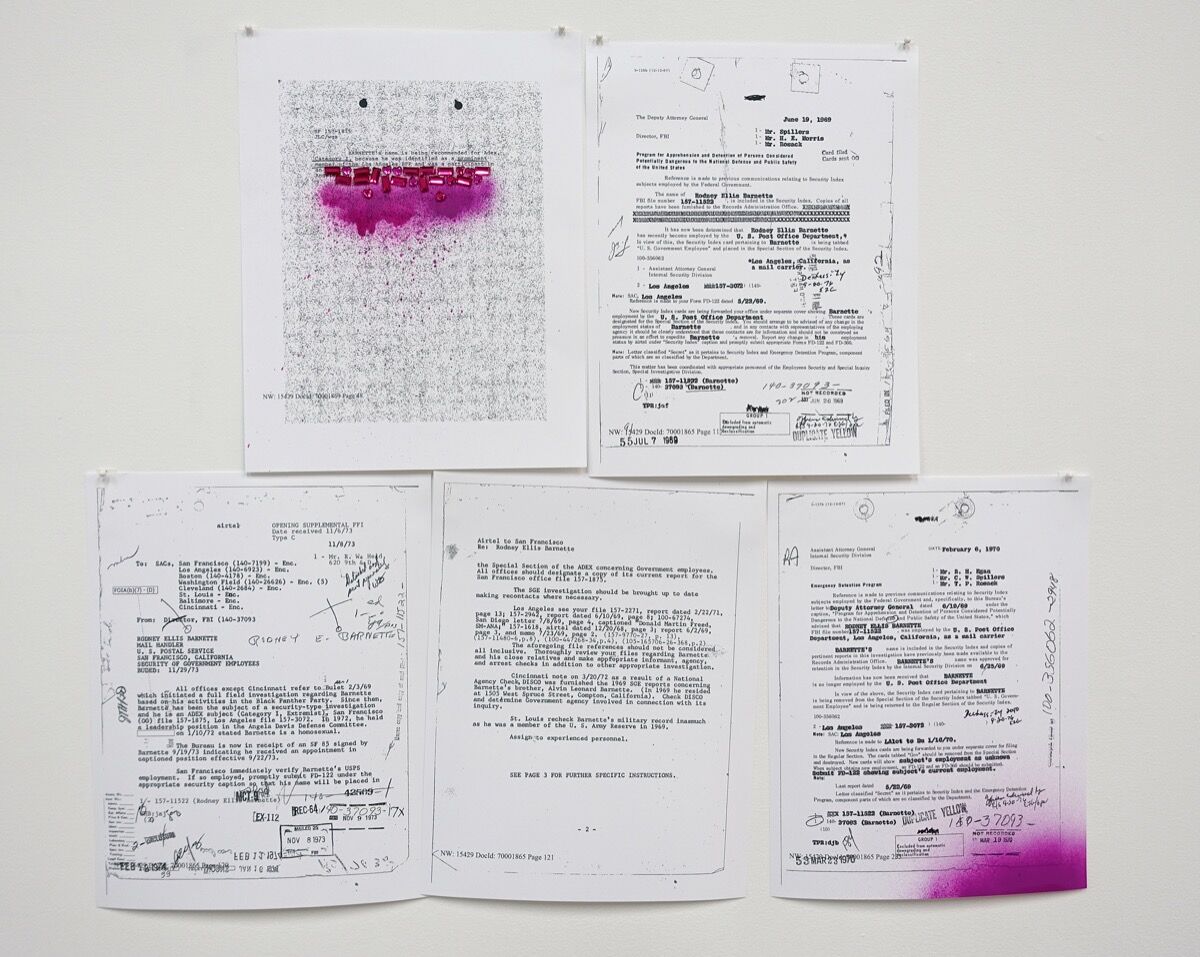 Advertisement
Rodney says that after a year, FBI interference forced him to resign his Panther post. “Somebody called me into the Panther office, who I never saw before, and told me that they were in the Panther Underground”—a fictitious group, he’d later find out. They ordered him to discipline members who were late to the Compton meetings by beating them with a stick. “I said, ‘That’s crazy. We can’t do that to our own people. How could we differentiate the police beating people, and us beating people?’ They told me I had to do it or to resign,” he remembers. “I always thought that that was some FBI agent, some agent provocateurs or informants that all of a sudden appeared to try to split the party up. It turns out it was true.”
Sadie’s My Father’s FBI File, Project II (2017), a wall installation of black-and-white laser prints of the government’s surveillance, allows for a selected reading of Rodney’s history in fine print. (The Baxter St installation is a smaller iteration of Sadie’s large-scale installation, My Father FBI File, Project I, 2016, which is currently on view in the group exhibition, “All Power to the People: Black Panthers at 50” at the Oakland Museum of California.) The artist has selectively stained the documents with pink and purple spray paint, a gesture that conjures the ways in which blood splatters. The work evokes the reality that the FBI’s illegal surveillance also included operations that resulted in the killing of prominent members of the Black Panther Party.
The graffiti gesture, for Sadie, is a layered means of symbolizing the language of 1980s Hip-hop—a culture that the artist, who was born during the dawn of that era, often weaves into her work in order to to write herself into it. In graffitiing the documents found in Project II, Barnette writes herself into her paternal history. “There’s just so many marks and evidence of information collecting and surveillance on these files that I wanted to put our mark back on it,” she says, “and really claim ownership of it.” The gesture also represents an artful method of redacting the purposefully fabricated misinformation found in the documents. For instance, the documents discuss an “aborted ambush,” that, according to Rodney, the Black Panthers never planned.

“I have this amazing material and I was thinking, ‘How much do I alter it? How much do I just let it speak for itself? How much do I share?’” says the artist. “I think what’s really important is to show how the FBI was looking at these organizations, and to challenge people to think for themselves about what they think the Black Panthers were really about.” She adds, the documents allow for “looking beyond just the leather jackets and into social actions, like the free breakfast programs that we have in schools now that came from the Panthers’ Free Breakfast For Children program.”
Sadie’s use of language—seen in earlier work shown while she was an artist in residence at the Studio Museum in Harlem in 2015—as representative of America’s racial divide belongs to a tradition of art that is typified by artists like
Glenn Ligon
,
Sam Durant
, and Sadie’s mentor,
Charles Gaines
. The conceptualist exploration of language used to describe the black condition that is found in the art presented in “Do Not Destroy” seems to loosely draw upon Gaines’s “Librettos: Manuel de Falla / Stokely” (2015), a 12-part series that fuses Spanish classical music with a 1967 fiery speech by the Panther Party’s most ardent member.
“Do Not Destroy” represents the remarkable admission by the United States government of how they surveilled one American life. The FBI file that the Barnettes obtained outlines an entire decade. It even shows evidence that informants monitored Rodney’s whereabouts when he was 15 years old, long before he was a Panther and the government attempted to sabotage his employment with the postal service. 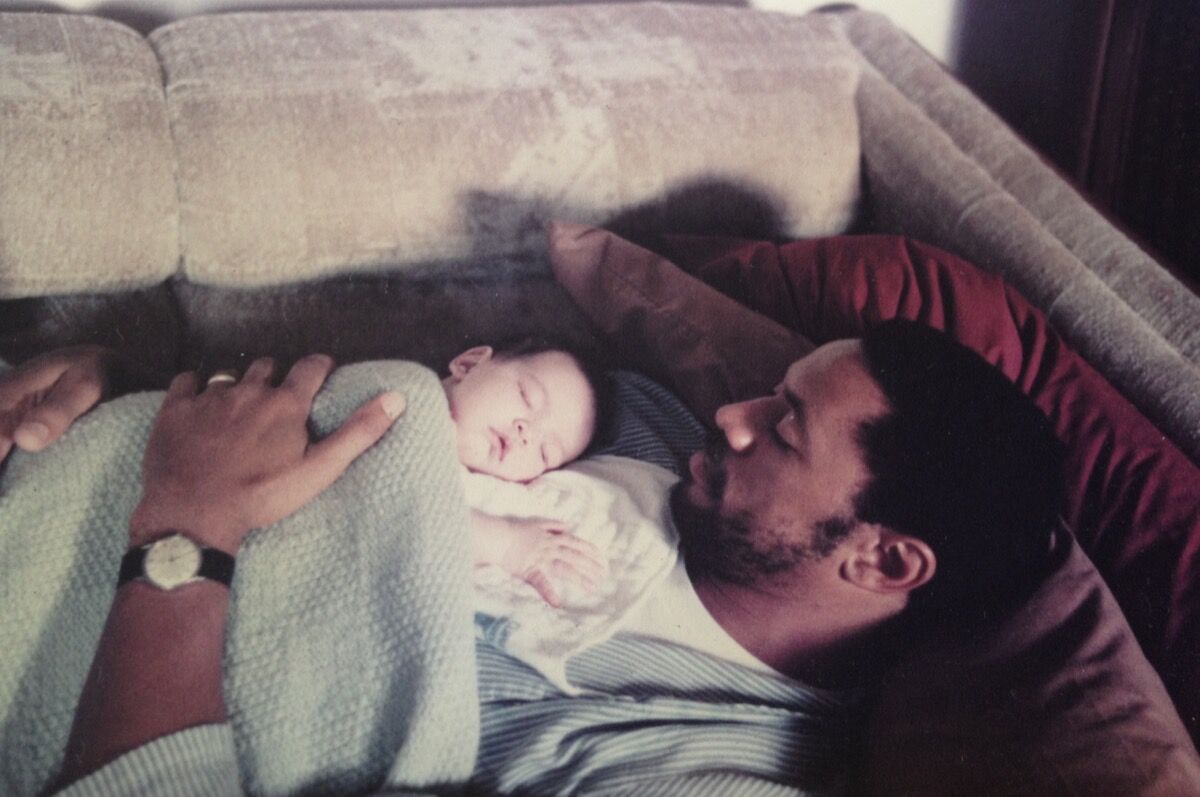 Photo of Rodney and Sadie Barnette courtesy of Baxter St.

The exhibition offers “a way to talk about the personal as political and the specific as universal,” says Sadie. “This particular project is about my father, but it’s also about so many other people’s fathers. There are so many people who were involved in the Panthers,” she says. “So many people have a file like this on them, many of whom are still in prison, or many of whom might not have a child who happens to be an artist and can use their family as a way to talk about the greater black community and American history.”
Rodney found solace upon seeing his daughter’s first installation of the files, out in public at the Oakland Museum. “It gave me a sense of freedom,” he says, “I felt like, ‘Wow, I’m free now.’”
—Antwaun Sargent