The Artist Turning Destroyed Buildings into Mesmerizing Works of Art 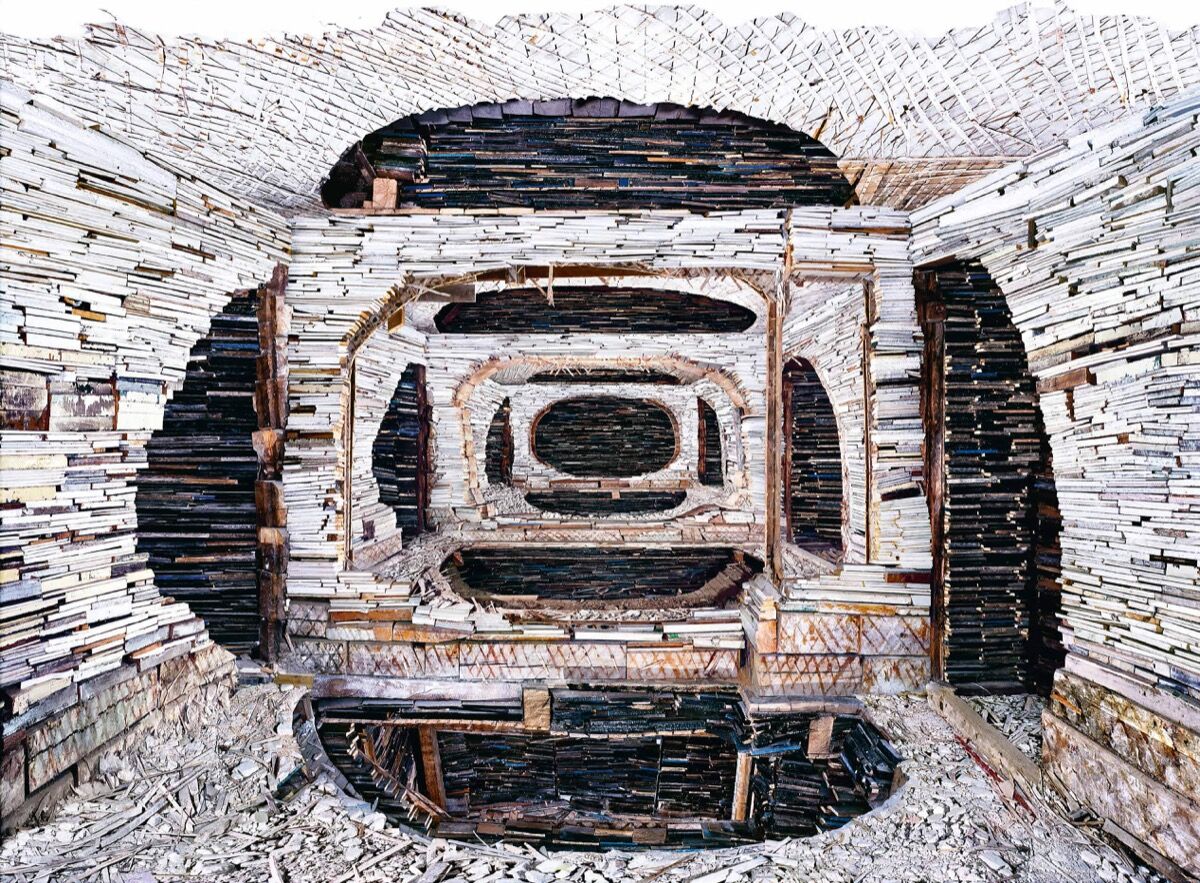 Dutch artist
Marjan Teeuwen
loves a challenge. Her chosen canvases are entire buildings, which she methodically dismantles and reconfigures to create mesmerizing, massive installations. For the past decade, Teeuwen has transformed dilapidated, soon-to-be-destroyed structures into highly ordered, ephemeral artworks.
Consider an abandoned home in Gaza, which she turned into a hypnotizing patchwork of intricately stacked concrete blocks; or a former sex shop in Leiden, Holland, which in her hands became a floor-to-ceiling monochromatic composition constructed from bits of broken plaster. Teeuwen preserves her effort in photographs, just before the original building (including her hypnotizing intervention) is demolished once and for all. A selection of these images will soon be on view in Teeuwen’s first-ever U.S. solo show, “Destroyed House,” at Bruce Silverstein Gallery.
“I’m attracted to tasks that seem too large for me—tasks that are almost impossible,” she tells me by phone, from her home in Amsterdam last week. Each “Destroyed House,” as she’s dubbed the series of interventions, can take her as long as a year to create, and is the culmination of a complex process involving permits, large teams of assistants, and the occasional wrecking ball. 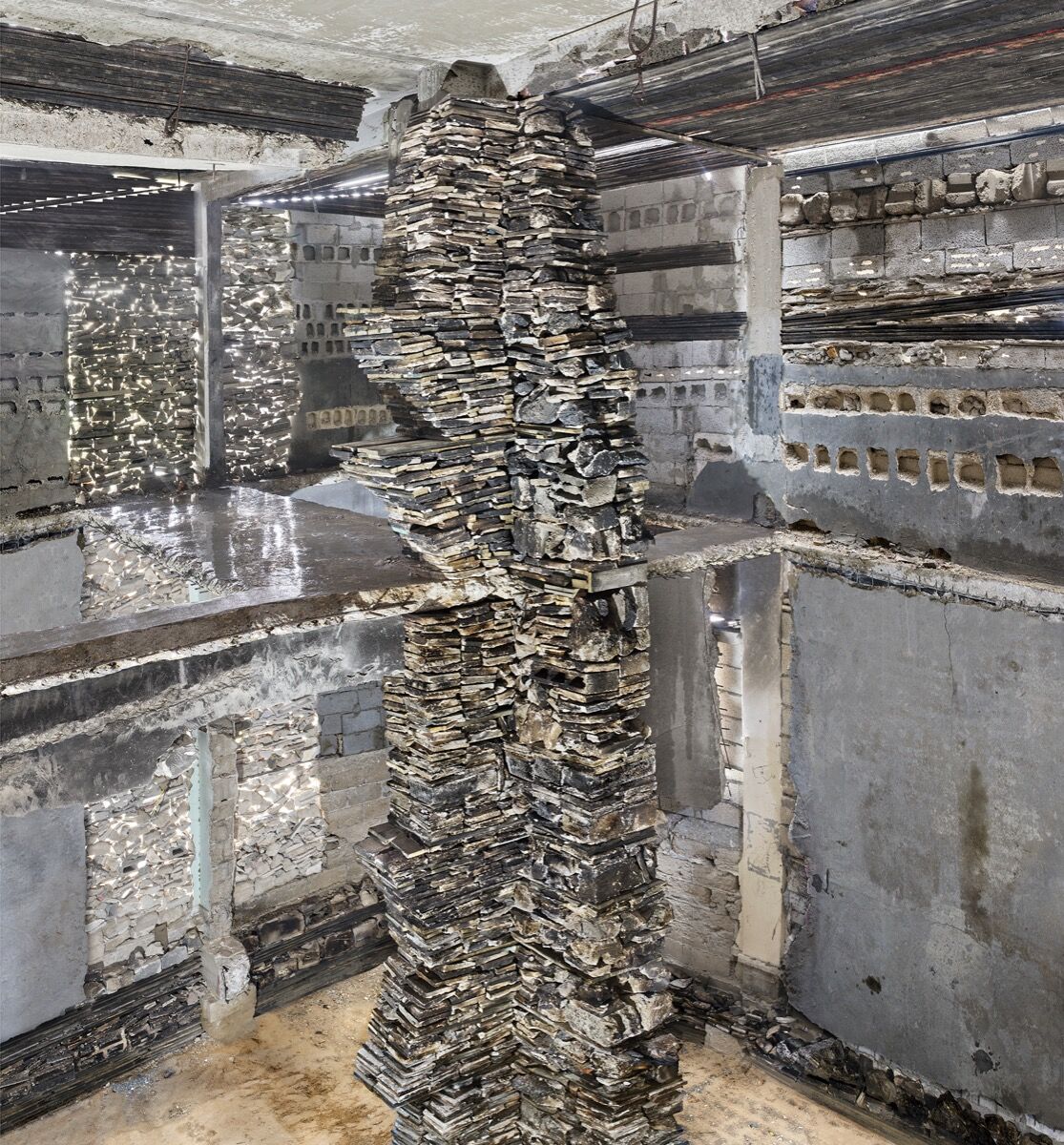 First, Teeuwen must find a building slated for demolition and obtain approval to enter and alter it. Then the fun begins. With a help of a contractor and a team of technical assistants, she methodically converts the crumbling space into a three-dimensional collage. Chunky debris from a felled concrete floor or wooden wall might become the building blocks for a two-story-tall totemic sculpture; Teeuwen might construct a new façade that resembles a minimalist painting more than it does an architectural feature.
The large-scale photographs of her architectural experiments operate like shrines to the installations Teeuwen has completed, which also honor the buildings they’re constructed from. More compellingly, though, they symbolize memories—those slippery, malleable thoughts that we attempt to organize and reconstruct just as Teeuwen does the detritus of buildings.
Teeuwen, who is in her sixties and was born and raised in the Netherlands, has been interested in the intersection of art and the built environment since her college days, at the Academy of Fine Arts in Tilburg and the Academy of Fine Arts and Design St. Joost, in Breda. There, she studied a mix of architecture, installation, and painting, learnings which she’s folded together over her career.

Advertisement
In an earlier series, called “Huiskamer” (or “Living Room”) (2002–05), Teeuwen stacked the colorful contents of a home (mattresses, books, shoeboxes, tchotchkes) so that they climb up the walls. The photographs that result show neat but brimming compositions of objects, which resemble a hybrid of a geometric painting and a photograph that might be found under the hashtag #thingsorganizedneatly. The images represent order (if of a claustrophobic sort) that’s been brought to a chaotic mess of stuff.
Soon after, Teeuwen began to expand on the relationship between chaos and order by introducing themes of destruction and reconstruction to her practice. In an ongoing series called “Archive,” started in 2005, she arranged debris and objects extracted from destroyed buildings (asphalt, plaster, plates, crushed computers, bricks, tubes, and tiles) into room-scale, monochromatic accumulations. Here her materials, which had been used and discarded, contained multitudes of history and memories.
As Teeuwen’s installations became larger, she still found herself hunting for an even bigger challenge. The opportunity arose in 2008 through a friend who worked as a contractor. He clued her in to a snack bar in Holland that was slated for demolition. After an ad-hoc process of approvals, she began her first “Destroyed House,” removing floors and walls to create her canvas. The leftover debris became fodder for new, honeycomb surfaces. Teeuwen blanketed one room entirely in meticulously stacked white and beige pieces of wood and other flotsam from the building. She also erected new walls using rubble—in some cases only black materials, in other cases only white. She photographed the installation, compositing some of the images together in Photoshop, a process she describes as “maximalizing” the perspective of the modified space. 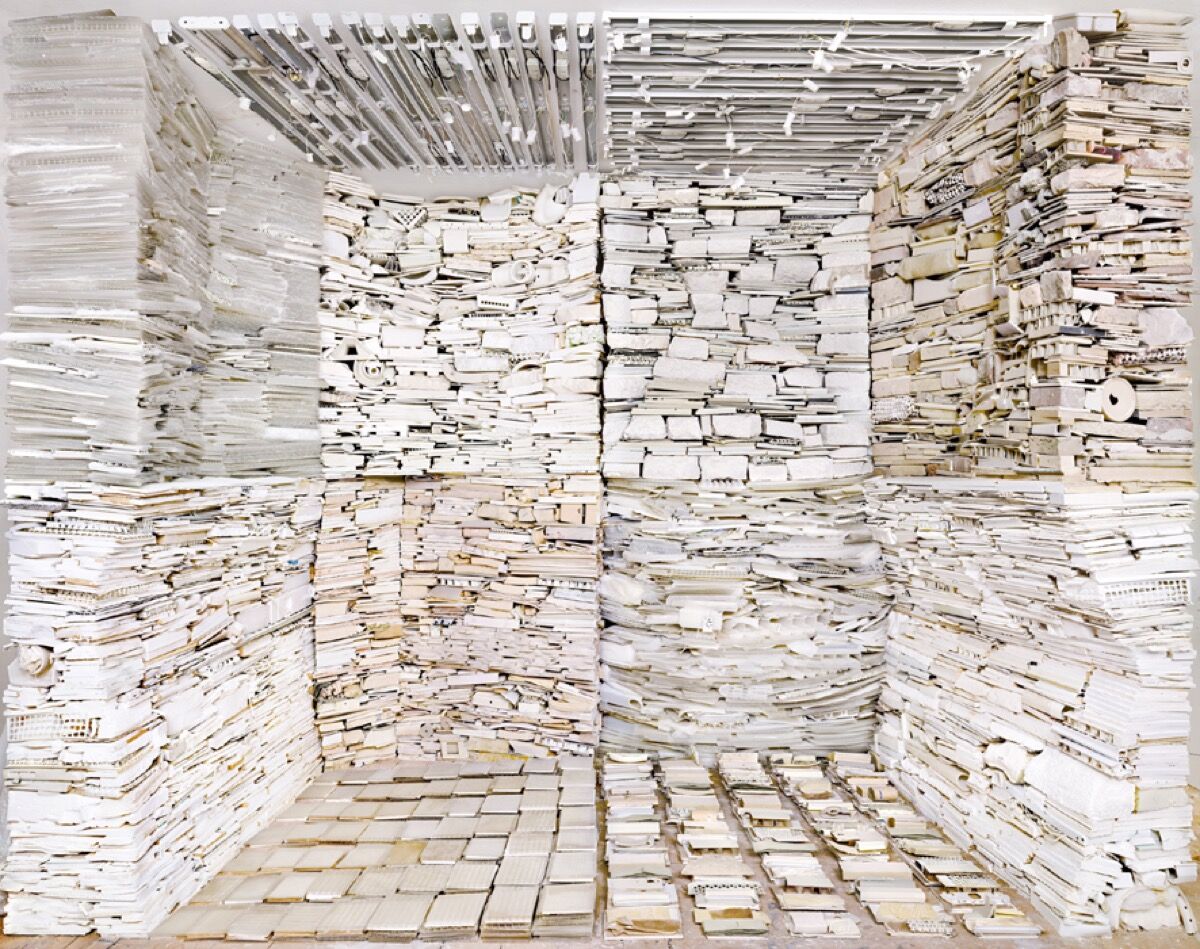 Finally, the building was demolished, along with Teeuwen’s intervention.
It’s impossible to look at Teeuwen’s work and not think of conceptual artist
Gordon Matta-Clark
’s “building cuts,” which he made throughout New York, New Jersey, and Chicago in the 1970s. The holes and splits he cleaved into abandoned buildings were an act of anarchy: opening inaccessible, closed spaces to the public.
Teeuwen’s interventions, however, are less aggressive. Where Matta-Clark took away and perforated, Teeuwen expands, rebuilds, and reorganizes, transforming once forgotten spaces into environments that become spectacular and awe-inspiring.
Teeuwen hopes that all of her interventions open up a “new perspective on both the architectural and social structure of the building.” They also tap into the meanings and memories we associate with the built environment—the structures in which we spend our days.  For many of us, the spaces we leave behind over the course of our lives exist only as intangible memories. But Teeuwen gives physical form to this process by sculpting with debris from these spaces, in turn creating new memories—and preserving them in the form of photos.
Alexxa Gotthardt
Related Stories