How Mike Perry Turned Broad City into a Cartoon 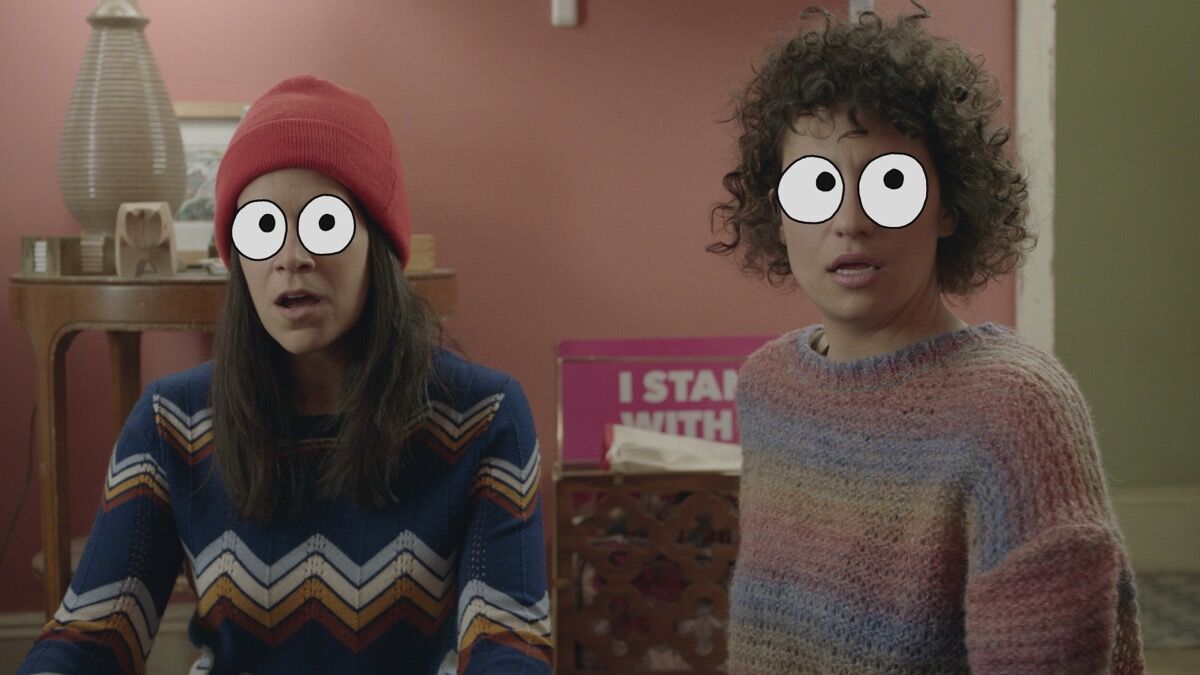 “I want to be animated for the rest of my life,” said actress Alysia Reiner, capturing the feeling of many who had gathered in Brooklyn last week to watch a sneak peek of Wednesday’s special animated (and truly dazzling) Broad City episode. “Mushroom,” the episode, in which Reiner makes a guest appearance, features the show’s central duo Abbi and Ilana taking a psychedelic stroll through New York City after downing some extremely potent shrooms. So potent, in fact, that their trip extends into the fabric of the episode itself. The pair’s eyes are replaced by drawn googly eyes, and the rest of the world quickly transforms into an surreal animated wonderland as well.
From an (imagined) journey to France to hallucinating an ex-boyfriend at the worst possible time, the animations in the episode seem effortless. But Broad City isn’t a cartoon, and “Mushrooms” was the result of months of work. So how does a live action show take its story into the drawn dimension? 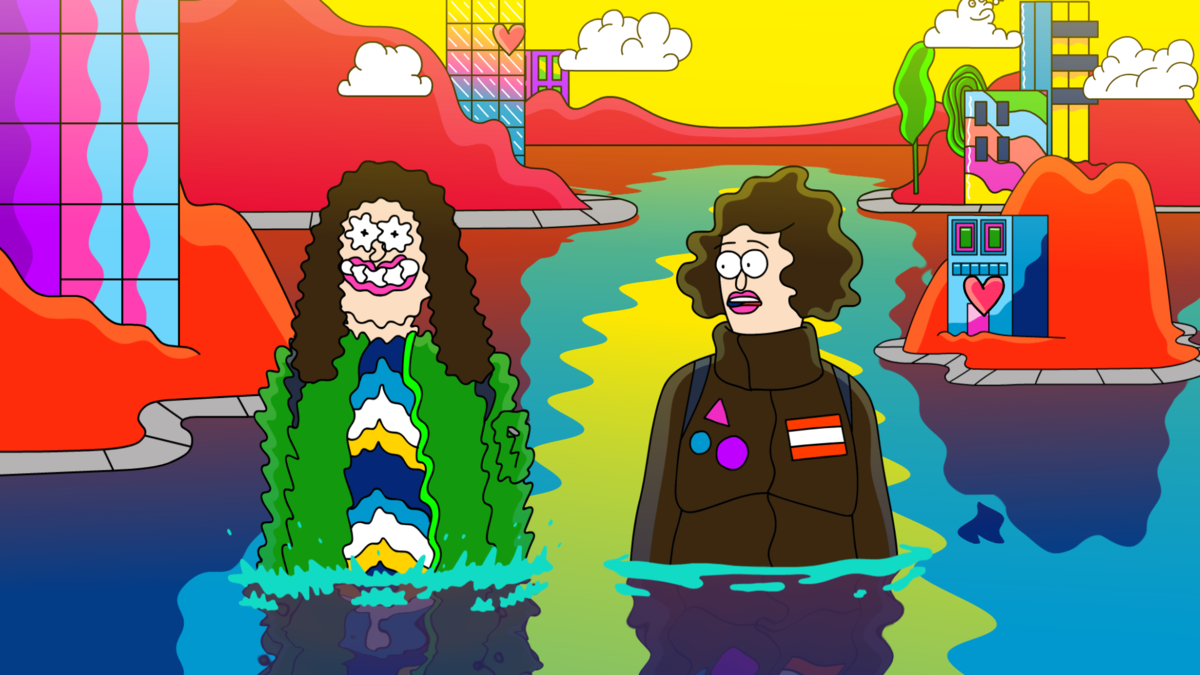 The answer begins with the artist behind the trip’s visuals:
Mike
Perry
. The name should be familiar to any fan who has followed the show through its four-season run on Comedy Central. Previously, Perry’s drawings had been limited to Broad City’s animated intros and a coloring book tied to the series. But last summer, he got a text from Ilana Glazer and Abbi Jacobson, who created and star in Broad City, with an ambitious proposal: Animate an entire episode.
“Of course I lost my shit and was like, yeah, let’s do it,” said Perry, whose work as an illustrator and artist is well known beyond basic cable. But unlike his pieces currently on view at Garis & Hahn in Los Angeles, the animated episode of Broad City is, well…animated. Neither he nor anyone who normally works on the show had experience making a cartoon. So they brought on a small team of animators who had more experience making drawings move (still, no simple feat).
“This was the first time I’d worked with animators and understood the importance of their skill, almost as silent actors,” Perry said. “It’s one thing to make a drawing. It’s another thing to make it dance.”
The creation for the episode stretched over roughly seven months. Nascent production began in January with storyboards—“little daydreams,” as Perry describes them—that would go on to form the episode’s core. Among the black and white storyboard drawings are images of Ilana and Abbi, arms entwined, moving through a tunnel as googly eyes surveil them from the walls and an early sketch of Ilana playing city newspaper boxes like an octopus on drums.
Concept art, created over the fall of 2017, has more color, including an early sketch that became Perry’s favorite scene. It shows the pair standing in a river between two canyons, with traces of the iconography of New York—from taxi cabs to street signs—appearing in the bright and luminous scene. 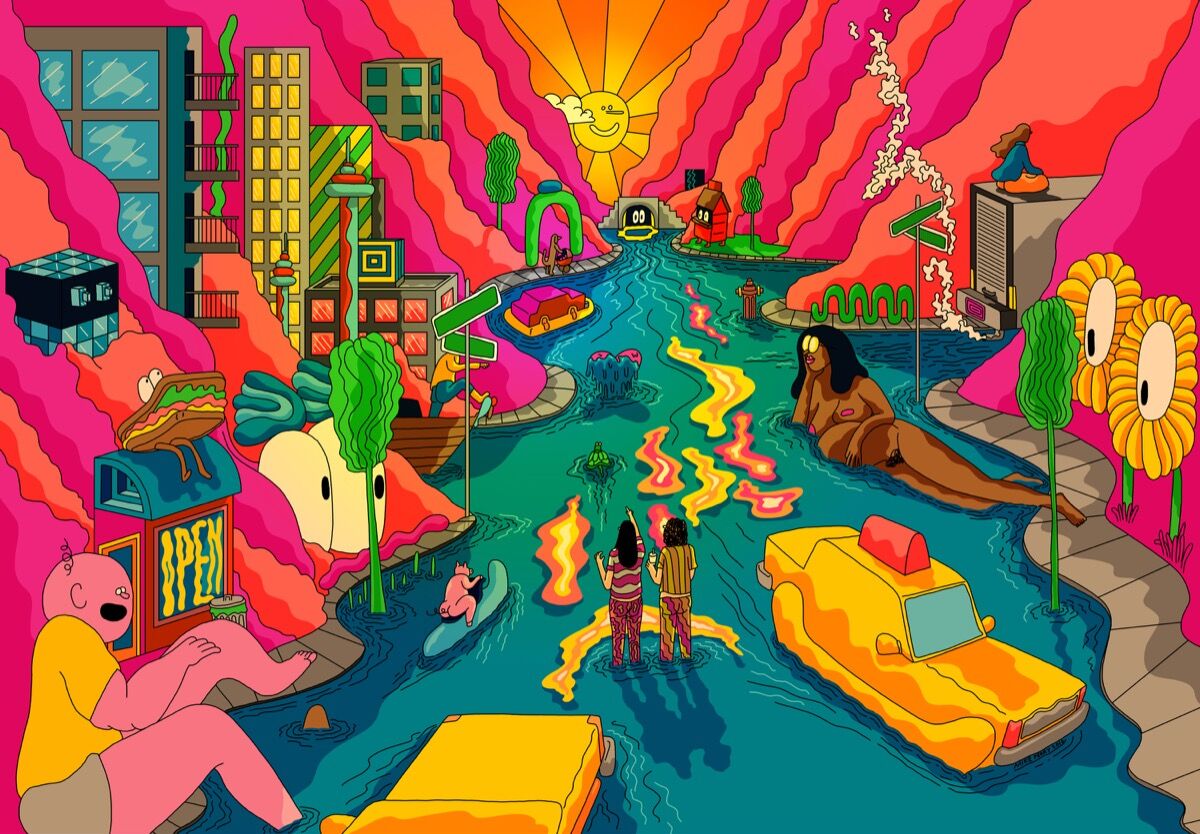 Advertisement
When script and more came in March, Perry started mapping out things in detail with the team. For the scenes that blended live action and
animation
, they had to make sure the synchronization worked, that animations were in line with where the camera was and how it was moving—all these details that led to “the full cartoon integration.” After everything was planned, Perry and his team went shot by shot, drawing each one on the computer.
The creative process itself was smooth, Perry said. “They’re very open creatives who trust the people that they work with,” he noted of Glazer and Jacobson. The result is an animated episode in which the staple hijinks of Broad City—sexcapades gone awry, bad encounters with the boss, drugs—are given singular exuberance and expression through the drawings. Even as the animations wind down with the trip, the live action scenes retain their glint.
The animation ultimately captures the essence of the show, bringing it out in ways that live action simply couldn’t. In one moment during the episode, the animated Ilana and Abbi clutch each other’s hands, their fingers twisting and wrapping together until they appear totally joined, like a ball of string. There is no better visual for the co-dependent friendship that is among the most endearing on all of television.
Isaac Kaplan is an Associate Editor at Artsy.
Related Stories